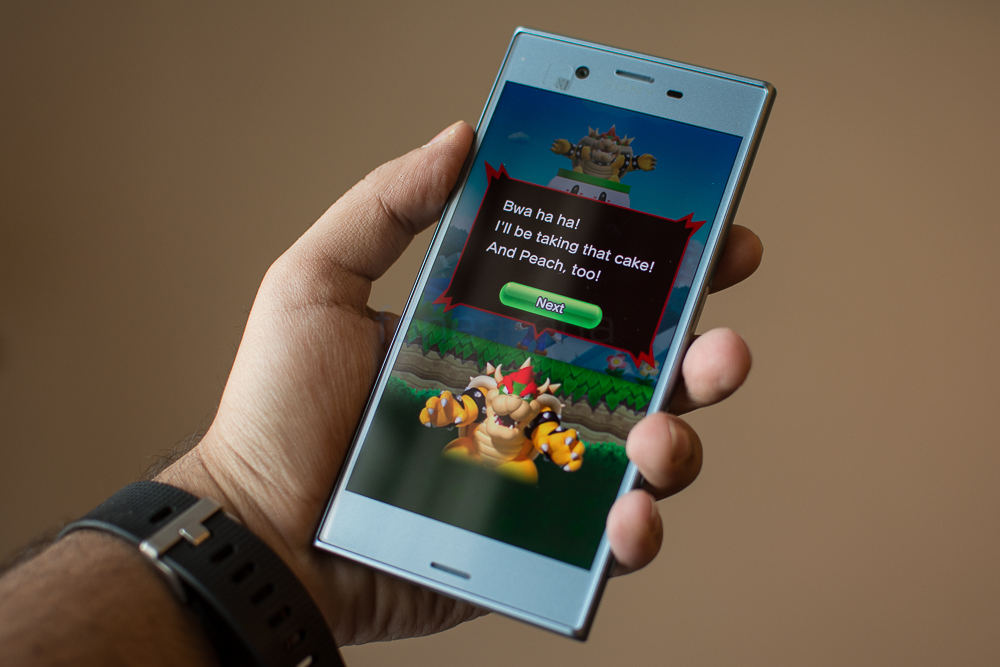 Nigh identical to the Xperia XZ launched back in October, Sony’s latest and greatest has more than a passing resemblance to the model. Placed side by side, the all new Sony Xperia XZs would appear to have the same shell, a very similar port configuration and for what it is worth, largely a similar configuration. What then separates it from a 6 month old model and more importantly, what makes it worth your consideration having launched within days of the LG G6 and Samsung Galaxy S8? We find that out and more in our full review of the Sony Xperia XZs.

The Sony Xperia XZs looks exactly the same as the Xperia XZ and for good reason. It appears that the chassis has remained nearly unchanged between the two device but we definitely won’t hold that against Sony. It might not be the most cutting edge design but the refinements made ever since the launch of the first Xperia Z have resulted in hardware that is pleasing to look at and feels really good in the hand. 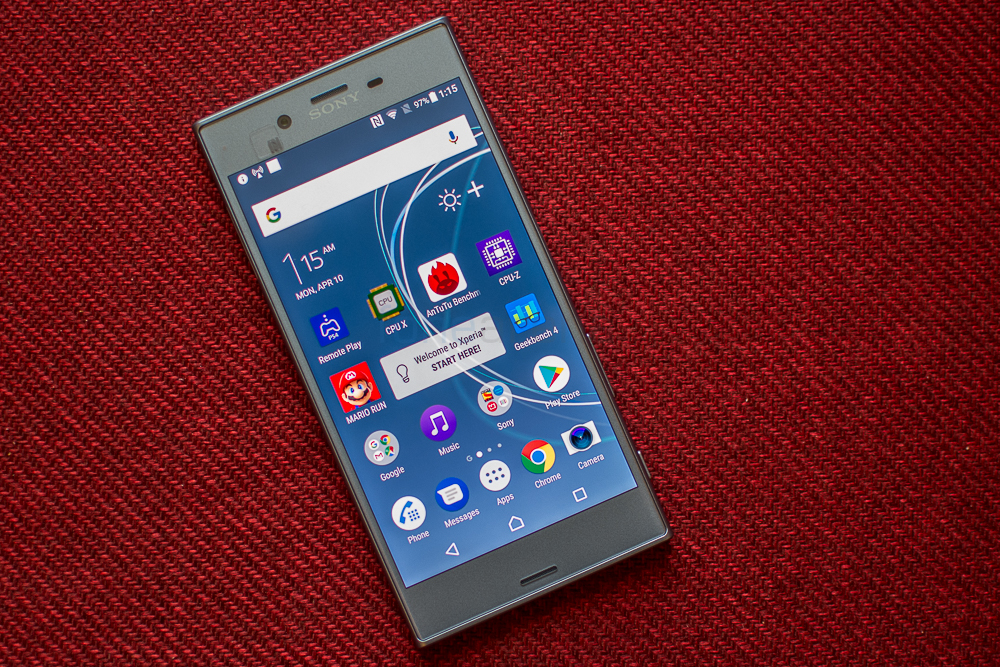 Over at the front you have a 5.2 inch display which has a Gorilla Glass coating on top of it that curves around the edges. There are significant bezels along the left and right edges which is a bit of an eye sore given the minimalistic designs being brought forth by the likes of Samsung and their Infinity Display. There are ample bezels both above and below the screen and within these lie the suitably loud and clear dual stereo speakers. A notification light lies above the left edge of the screen. In addition you can find a 13MP front facing camera. Like is the norm with Sony phones, the phone makes use of on-screen controls leaving the bottom bezel free of any capacitive keys.

The left side is where you can find the power button which also doubles up as a fingerprint reader. The overall ergonomics of the device take an unfortunate step back step with the volume rocker being placed below the power button. While the rocker provides great feedback, the position is far from comfortable. Finally, you’ll observe a camera shutter key at the absolute bottom. The left side of the phone has dual SIM card slots as well as a microSD card slot. Keep in mind that removing the tray will cause the phone to restart as a safety measure. The bottom edge of the phone has a USB Type C connector while up top is the 3.5mm audio jack. 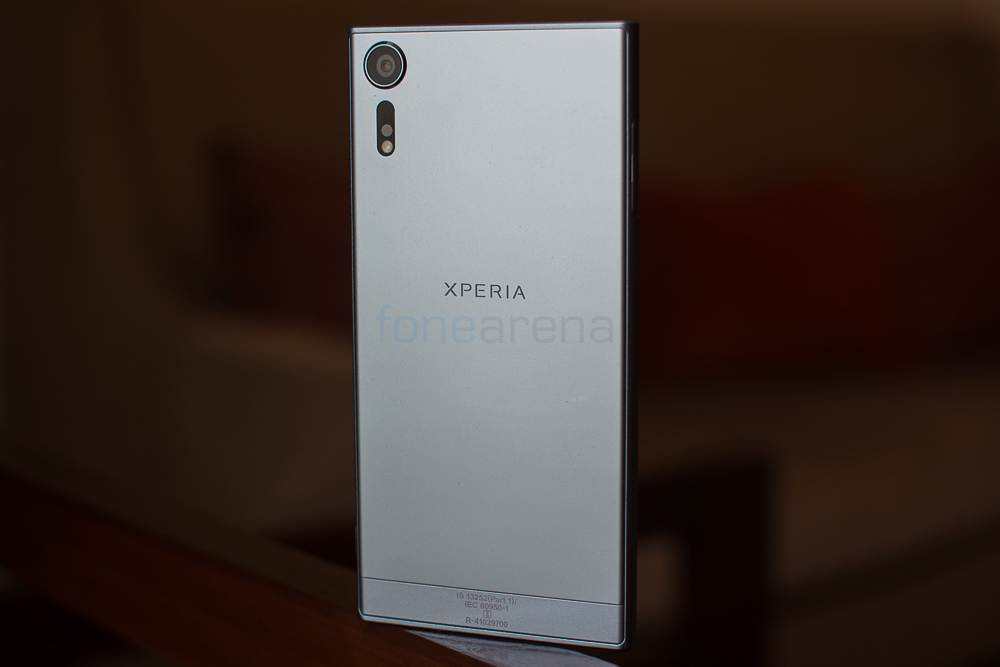 Flip the phone over and you’ll observe the same beautiful alkaleido alloy as seen first on the Xperia XZ. The material has a very peculiar sheen to it that adds character and gives it an illusion of depth. In hand, the material used feels really good and premium. The Motion Eye camera is raised every so slightly and below it is the sensor array that includes a laser auto focus module, RGB-IC sensor as well as a single LED flash. While not the slimmest phone around, The dimensions of the XZs are 146 x 72 x 8.1 mm and that makes it pretty compact. The phone weighs about 160 grams. Worth note, the Xperia XZs continues the tradition of being sealed against water & dust related damage.

The Xperia XZs ships with Android 7.1.1 onboard with a look that is more or less stock. That said, Sony continues it’s tradition of building in a full range of applications and software tweaks.

The home screen is a clean and simple affair with shortcuts for the camera app and Google Now. Swiping up into the homescreen reveals the icon layout. Unlike many current Android running smartphones, an app drawer still exists. Tap the button at the bottom and you enter the full list of apps. A search bar at the top lets you sift through everything installed on your device.

Talking about pre-installed apps, there’s a fair few of these here. Starting from the News Suite which displays the latest news as you’d expect to the Movie Creator app. The latter lets you create highlight movie clips that have text and filters added on top for greater visual appeal. Other pre-installed apps include games like Asphalt Nitro, Midnight Pool in addition to the AVG Antivirus, SonyLIV app. Finally there’s built in support for PlayStation Remote Play as well as Dualshock input. Unfortunately, all this content does take away from built in storage and can easily be considered as bloatware. Do keep in mind, quite a few of these apps cannot be deleted. Disabling them is the only option.

Finally, let’s talk about some of the deeper customisations and options. The built in theme engine is fairly robust and we’ve seen this in previous Sony devices too. The white balance correction for the display is very robust and can be customised using the RGB sliders at the bottom. A built in setting lets you play around with image and video reproduction by adjusting the X-Reality engine as well as the super vivid mode.

Internally, the phone is powered by a Quad-Core Snapdragon 820 64-bit 14nm processor paired with the Adreno 530 GPU. This is in addition to 4GB of RAM. In the week we spent with the hardware, we found performance to be absolutely top-notch. The lightly customised menu flies through and there are no lags, no slow downs and no jitters anywhere at all. The entire experience is very pleasing to say the least. Now, prospective buyers might raise concerns with the choice of a Snapdragon 820 processor when the Snapdragon 821 is already out and the 835 is right around the corner. Between the first two, the performance differential is minuscule and certainly not enough to lose sleep over here. Games, heavy-duty multitasking and apps of all kinds are handled with aplomb. We’ve put the handset through out standard benchmarking test to get you comparative performance figures. 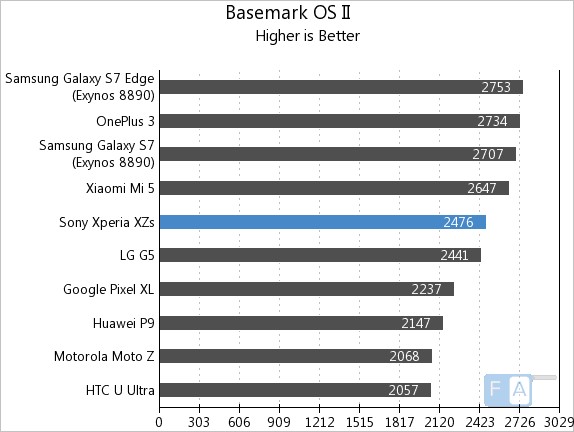 In the Basemark OS II benchmark, the phone scores 2476 points which places it in the middle of the test bench. The Galaxy S7 Edge does outpace it but the difference isn’t massive. 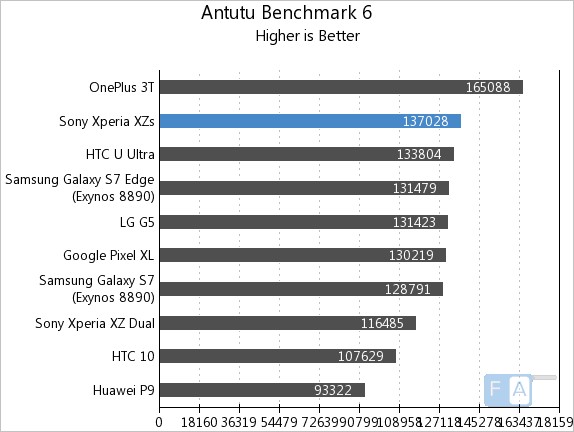 The AnTuTu benchmark results in a score of 137028 points which is in line with most of the other phones. The Snapdragon 821 packing OnePlus 3T does score more points here. 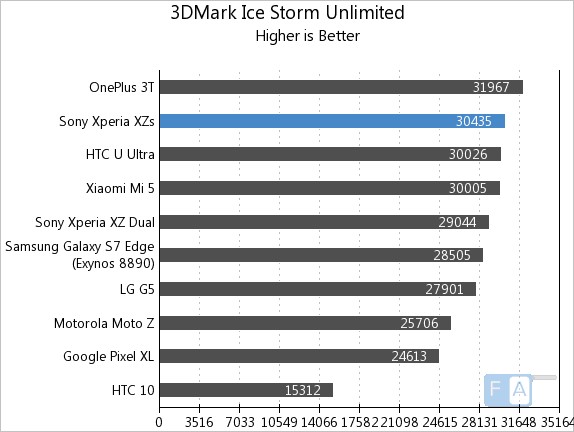 Finally, in the GPU centric 3D Mark Ice Storm benchmark, we can see that the phone scores 30435 points.

Where the world has moved on to QHD displays, the Xperia XZs retains it’s Full HD 5.2 inch screen. We’re definitely not going to complain though. The pixel density is great and images, icons, text look perfectly sharp. 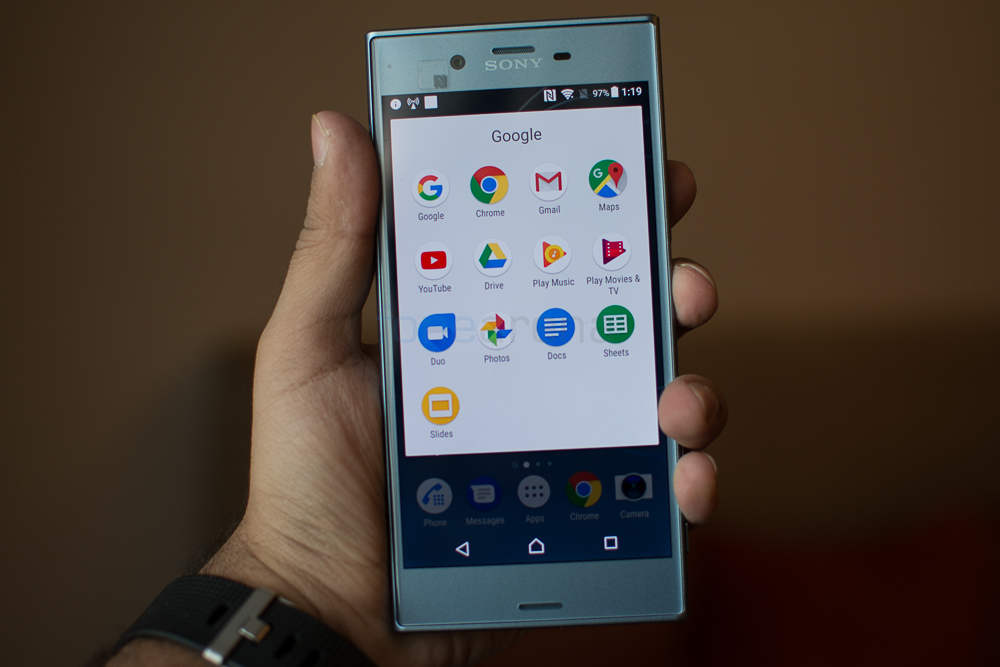 Sunlight visibility is fantastic and you’ll have no trouble viewing this screen even in the brightest of situations. Even in the bright Delhi summer sun, it’s easy to view and you really won’t find anything to complain about on that front. Color accuracy on the screen wasn’t quite the best and we noticed a blueish cast. This can be reduced to a degree using the robust display adjustment settings but it still isn’t quite neutral.

Sony has traditionally bestowed their flagship phones with the absolute latest sensors that the company has to offer. They are also in a unique position where they develop and manufacture the sensors for most flagship devices. Given the situation, it should be safe to expect the device to produce the best smartphone images possible. This is unfortunately not the case. 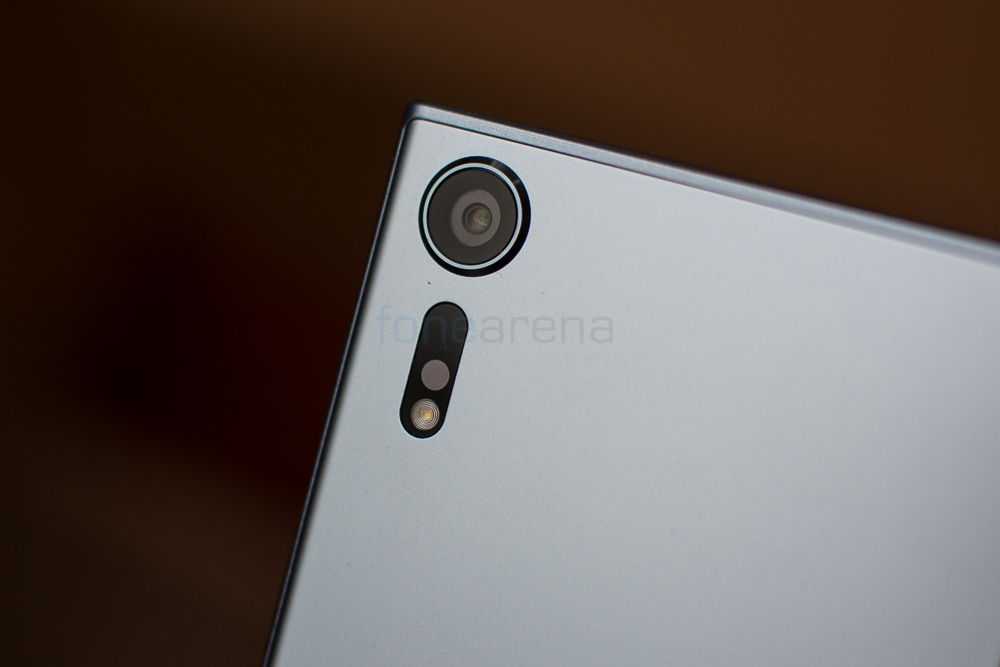 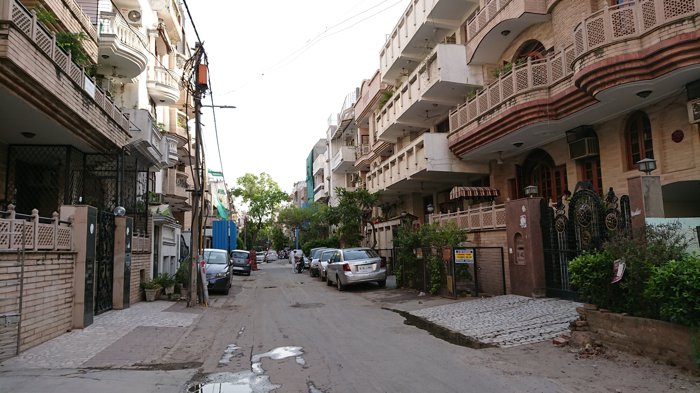 The actual image quality however left us wanting. As has been the case with previous generation Xperia devices, dynamic range is limited. In well-lit conditions, images are pleasing enough but the moment you zoom in or start pixel peeping, the flaws become all too obvious. Notice the image above, the sky is bright to the point of being a white splotch with no hint of clouds visible. Similarly if you zoom in to the lower right corner, you’ll notice a loss of details in the shadow region.

In a silo, the images look good enough but put it next to something like the Google Pixel or Galaxy S8 and the differences become very obvious. Results from the camera appear over-sharpened but the extreme noise reduction algorithms are what peeved us the most. The aggressive algorithms leave digital splotches that become all the more visible when shooting in darker settings. Low light images are simply unimpressive and soft.

Let’s talk about the all new super slow motion capture that Sony has been hyping up. Capable of capturing shots at a mind-boggling 960FPS, the Xperia XZs achieves this by placing RAM directly between the sensor and the ISP. This acts as a buffer and can rapidly queue up shots. The downside is that the buffer is fairly small and you will have to wait between multiple slow motion capture sequences.

As you can see in the samples above, image quality greatly suffers when you capture slow motion video and we suspect that to a large extent this is because the current chipset & memory bandwidth just doesn’t leave enough room for applying any significant image processing. The noise levels certainly do suggest that the output is ‘straight from the sensor’. A single tap captures a little over a second of footage and the resulting slow motion footage is about 5 seconds in length. For a first generation piece of technology, this is very impressive and we’re not going to be too critical here.

Connectivity options on the phone range from 4G LTE, WiFi 802.11 ac (2.4GHz / 5GHz) MIMO, Bluetooth 4.2, GPS/ GLONASS and NFC. The phone charges over USB Type-C but doesn’t support USB 3.0 transfer speeds. Built in storage is 64GB and there’s about 49GB available. It is possible to expand storage via the microSD card slot. While the phone is a Dual SIM device, it sports a hybrid SIM slot so you’ll need to choose between multiple SIM support or the microSD expansion.

There’s a relatively small 2900mAh battery built into the device. The phone supports Quick Charge 3.0 as well as Qnovo Adaptive charging. The former lets you charge the phone rapidly while the latter ensures that your phone’s battery can manage more cycles. We observed standby times to be absolutely outstanding and generally, the Xperia XZs easily lasted a full day of use. Sony has their own proprietary Stamina & Ultra Stamina modes built-in which can extend battery life even further.

The Xperia XZs isn’t revolutionary but with Sony’s pace of releasing smartphones, it perhaps isn’t even possible. Every 6 months, Sony comes out with a brand new flagship with an iterative update but with the XZs, we’re beginning to see a new level of refinement. For the most part, the Xperia XZs impresses. The design while subdued and understated, continues to look good and performance is in line with the competition. The phone does well on the audio playback front and even includes support for the LDAC codec that Google is planning to roll in with the Android O update. And finally, battery life that really impresses. The camera on the other hand is satisfactory but that just doesn’t cut it with the advancements being made by the competition. Photographs from the phone are strictly average with low light images being particularly unimpressive. The Super Slow Motion tech in general is impressive but comes off as a first generation tech demo. For a phone priced at Rs. 49,990, the phone has a lot going for it but with the next generation of flagships right around the corner and the current crop trouncing it in certain areas like image quality, we’d advice prospective buyers to carefully consider the competition before investing the money.