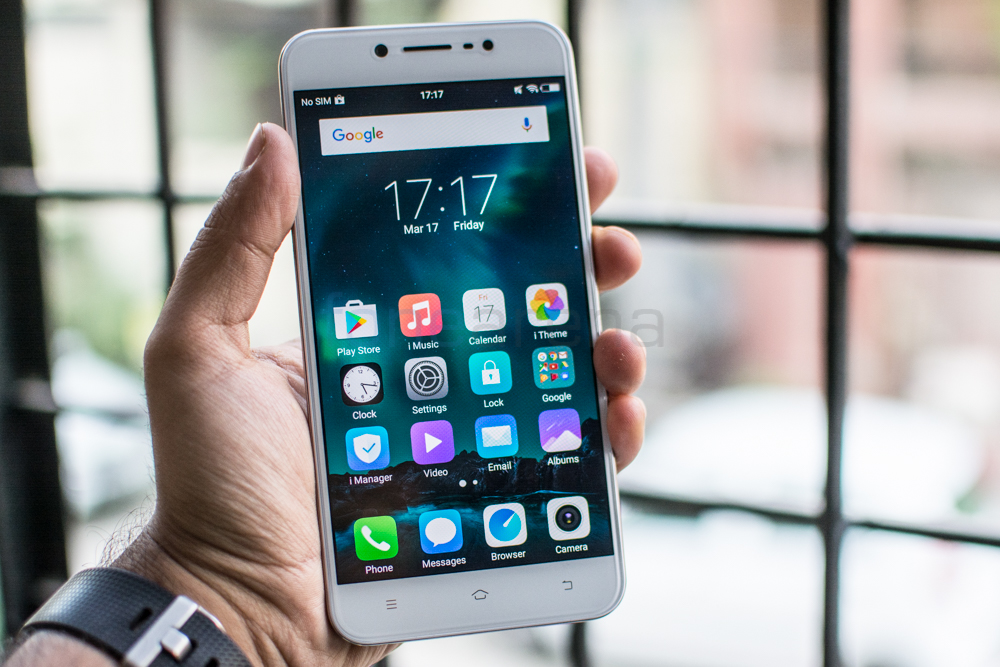 Vivo has consistently been pushing out fresh hardware over the last few months. From the V5 to the Y55s and the Y25, there’s a certain formula to the hardware and it appears that the company hasn’t strayed too much for it on their latest launch, the Y66. Here’s our review of Vivo’s latest.

It wouldn’t be unfair to refer to the design of the Vivo Y66 as uninspired and derivative. The phone is virtually identical to most other devices from the manufacturer and continues to look somewhat generic and inoffensive and doesn’t push any boundaries when it comes to design. Really though, design consistency aside, it does no favors to the brand when all the models look more or less alike.

The front is where you’ll notice the now common 5.5 inch display. Bezels on the side are minimal but you’ll find a large chin and equally large area above the screen. Up top is a 16MP front facing camera alongside a single LED flash. You’ll of course also find the central earpiece and ambient light sensor. Below the screen are three capacitive keys corresponding to menu, home and back keys. 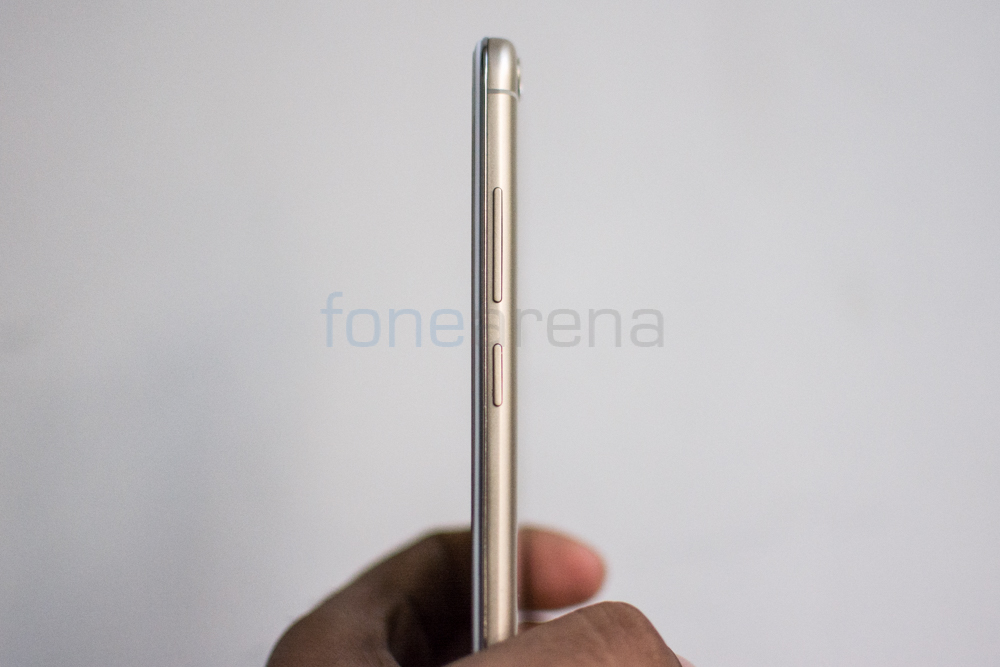 The left side of the phone is where you’ll spot the volume rocker and power button. The tactile feedback is better than expected and so are ergonomics. The metal buttons are clicky and have a lot of travel to them which makes pressing them feel very reassuring. Meanwhile the left hand side has a hybrid SIM slot. The phone charges over microUSB port at the bottom. With USB Type C fast becoming the norm, we found it a bit disappointing that Vivo did not adopt the latest connector standard here. The 3.5mm audio jack lies at the top of the handset. 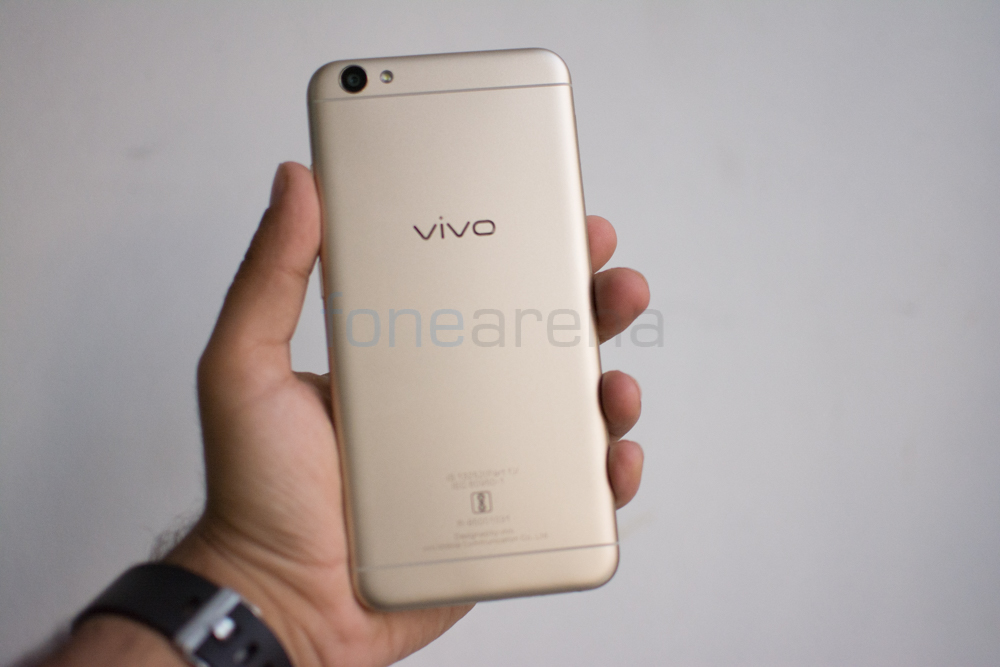 Flip over to the back and once again you have the familiar design. There’s nothing much to complain about here and the hand-feel is quite nice. The metal construction feels good and over at the top lies the camera module and LED flash. Antenna bands can also be spotted along the top and bottom edges.The handset measures 153.8 x 75.5 x 7.6mm and weighs 155 grams making it a densely built phone but certainly not heavy. Overall, the Vivo Y66 is a fairly good-looking device with a build to match.

The Vivo Y66 runs a highly customized version of Android that it calls Funtouch OS. This OS is based on Android 6.0 and brings with it several changes to the interface paradigm.

The homescreen drops the two level app drawer and all icons are displayed straight on the homescreen. You can however make folders to sort out your apps.

There’s a number of nifty little additions strewn around the interface including full device search that can be activated using a short pull down gesture from the upper half of the screen. Other additions include the ability to customize the volume key as a shortcut to perform a number of actions. For YouTubers, Content Creators and anybody else who likes to annotate long webpages, there’s built-in support for screen recording, long screenshots and to annotate pages.

The Vivo Y66 is powered by the 1.5GHz MediaTek MT6750 Processor paired with 3GB of RAM. A tried and tested chipset, we’ve previously found it to be reliable enough for a daily driver phone. Pure performance is not quite its strongest suit and while day-to-day usability is absolutely fine, heavy multitasking and particularly high graphic games take a bit of a toll on the experience. Apps take a bit longer than expected to start up though once running, we didn’t really notice any slow downs. We ran a range of benchmarks to get a better idea of comparative performance. Follow through for the results. 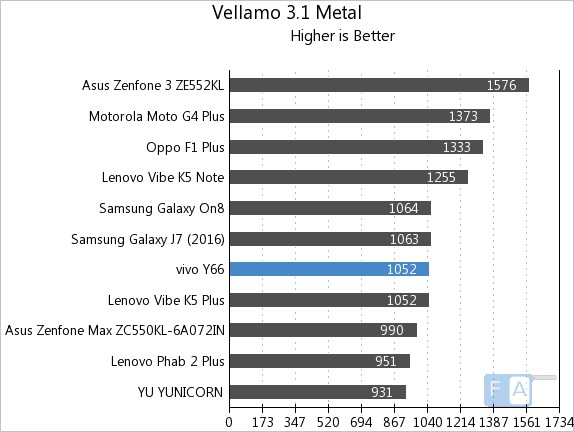 The Vivo Y66 scores 1052 points in the Vellamo 3.1 Metal benchmark which places it around the center of our test bench. 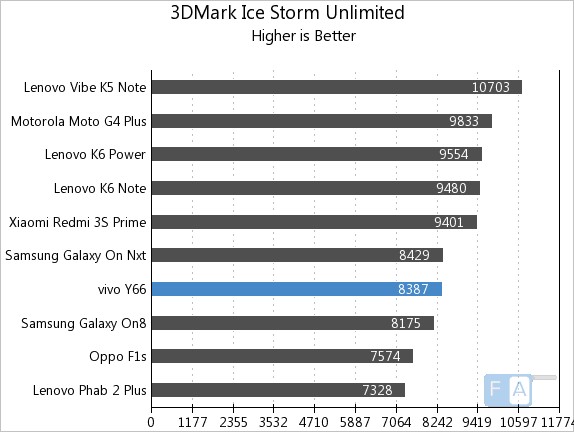 In 3D Mark Ice Storm Unlimited, the phone scored 8387 points. Once again, this is on the lower end of the test bench. 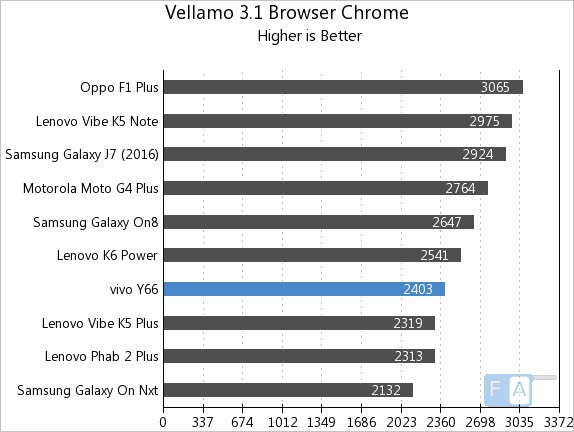 Finally, we rang the Vellamo 3.1 Browser benchmark where with a score of 2403 points, the Vivo Y66 is placed in the middle of the test bench.

Let’s talk about the display on the Vivo Y66. A 5.5 inch display with a resolution of 1280 x 720 is most definitely less than ideal. Look close enough and it is easy to spot the jagged edges around icons and text. Viewing angles are decent though there is a small amount of color shift when viewing it from extreme angles. 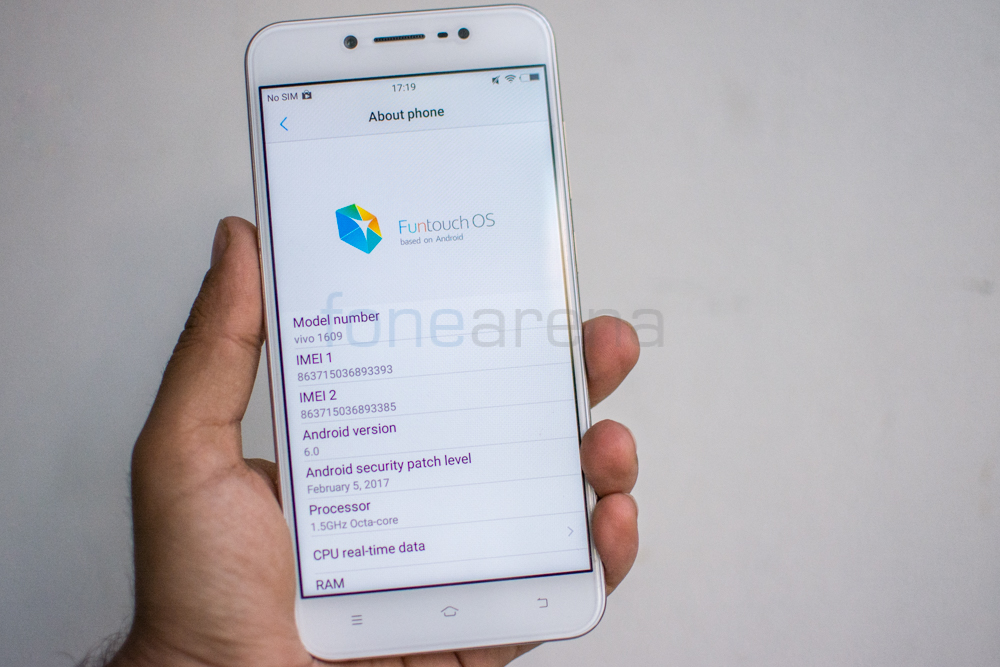 On the other hand, the IPS panel is bright and vibrant and looks good enough if you’re not pixel peeping. The screen errs on the side of over-saturation though so you might want to keep that in mind. We were pleasantly surprised by the brightness levels on offer here. Out doors in bright sunlight, the display was still perfectly visible. 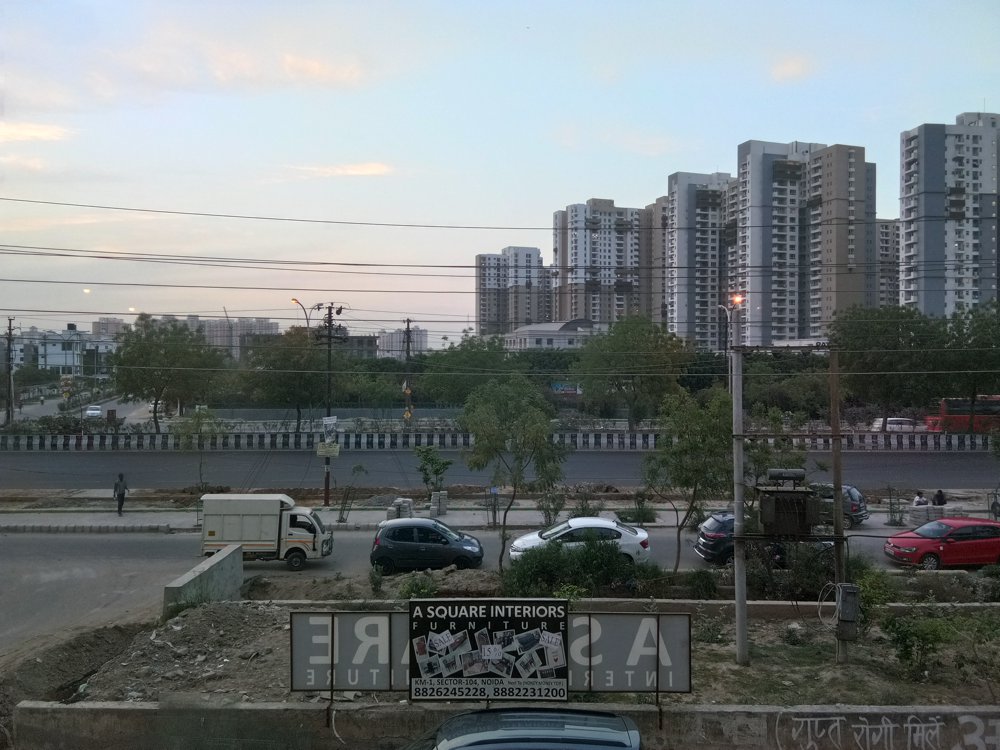 In decent lighting, we were quite positively surprised by the camera module on the Vivo Y66. We had our expectations set low but the phone surprised us by taking noise free, natural looking shots. Images were a bit low on details but that’s visibly only when you are zooming into your shots so you should be satisfied with the results here.

Things do go south in less than perfect lighting where the camera finds it hard to manage a focus lock, take a sharp shot, reduce noise or often a combination of all three. We observed a similar issue with the front facing camera which took good-looking images with natural colors but was not able to capture low-level details in the image.

Connectivity options on the Vivo Y66 include 4G VoLTE, WiFi 802.11 b/g/n, Bluetooth 4.0 and GPS. The phone is also equipped with a Hybrid SIM slot which means that you can either have two SIM cards or a single SIM card and a microSD card to augment the built-in 32GB of storage. You can also use USB OTG of course. Out of the 32GB of storage, just around 22GB is available for users so most will have to make use of the microSD slot for storage expansion.

In terms of battery life, there’s a 3000 mAh unit on board which was able to ensure we got a full day of use and nothing more than that. With average use, the battery on the Y66 will just about suffice for a full work day unlike its contemporaries that are packed with 4,000 mAh batteries and more than can promise two-day usage out of a single charge.

On the face of it, the Vivo Y66 is just another smartphone with a selfie-focused gimmick. In its favor though, the cameras on the device are pretty competitive. The entire package too isn’t very shabby with a bright, vibrant screen and decent battery life. 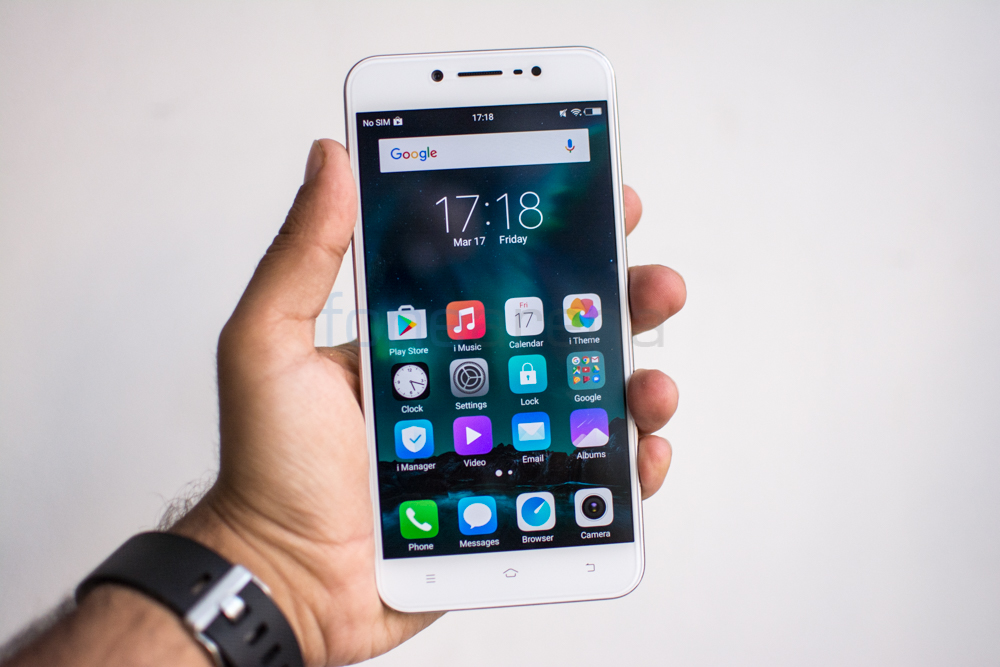 Vivo’s offline reach however is poised to give a positive push to the device. In a market segment which is as yet relatively untouched by online giants like Xiaomi, the Vivo Y66 makes for a good option with its sleek looks, decent battery life and above average cameras. For everyone else? Look elsewhere. The Vivo Y66 is priced at Rs. 14,990.