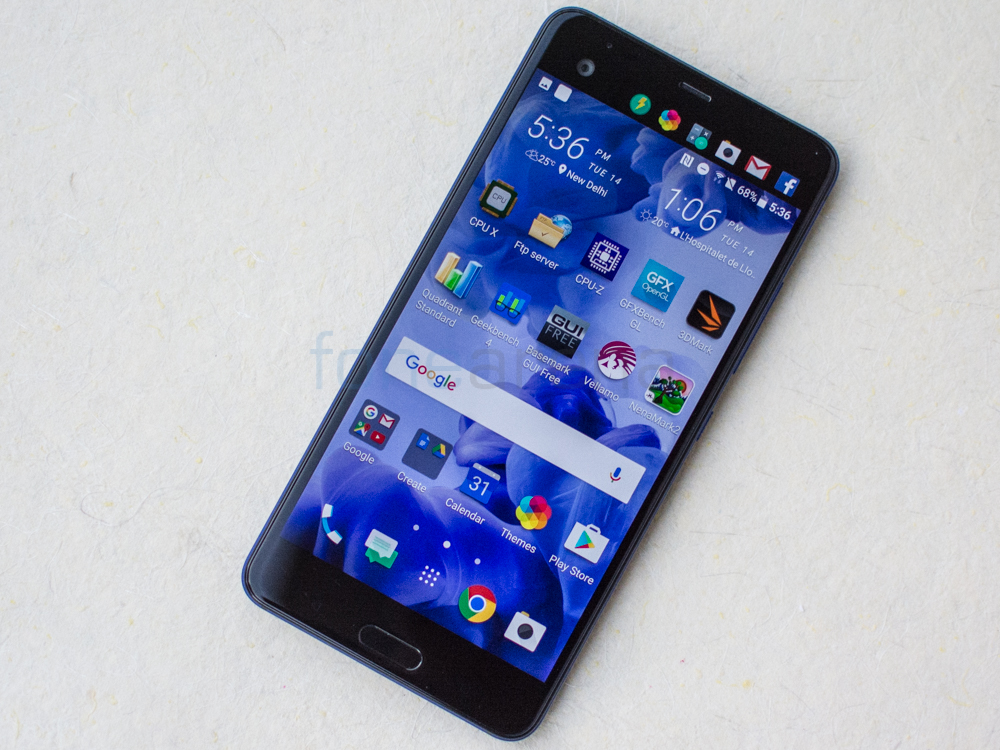 It’s been a while since we saw a compelling flagship from HTC. The HTC 10 Evo launched back a couple of months back wasn’t much of an upgrade over the 10 and offered little reason for users to upgrade. With the U Ultra, the company has adopted a somewhat refreshed design though the device is unmistakably an HTC. What is more interesting is that HTC isn’t really calling this its flagship and maintains that it still has a lot more under its sleeve. Having spent some time with the U Ultra, here’s our thoughts on the device.

It is likely that the first thing you’ll notice when you hold up the HTC U Ultra is sheer size of the device. Well, that is to be expected given the 6 inch display but it does take you a few moments to get used to. Where the likes of Samsung have moved on to dual curved edges and nearly invisible bezels, the HTC U has hefty bezels on both sides of the display which further accentuate the size.

There’s a large 5.7 inch Quad HD display up front but what is more interesting is the secondary panel running above the main display. This 2 inch panel is actually an extension of the same panel and offers a resolution of 160 x 1040 pixels. We’ll talk about this more in the display section of our review. Next to the secondary display lies the earpiece module as well as the 16MP front facing camera. A notification LED sits here that is completely invisible when not active. Along the bottom edge, you’ll notice a centered capacitive key that doubles up as a fingerprint scanner. On either side are capacitive keys that correspond to back and multitasking keys, the keys are backlit of course. The fingerprint reader has a texture like a regular key but unfortunately, does not press down which is something that took us a bit of time to get used to.

The right side of the device is where the volume rocker and power button are located. The ridges on the power button make it easy to identify but there’s just not enough give in terms of feedback. Both the power button and the volume rocker require you to push down much harder than you’d expect to achieve the necessary response. The left side is bereft of buttons while the top is where you’ll find the Hybrid dual SIM slot. Finally at the bottom lies the USB Type C connector and single speaker grille. No, the phone does not sport a 3.5mm jack which is rather unfortunate for what it’s worth. While we miss the BoomSound speakers of yore, the HTC U Ultra clubs the earpiece and downward facing speaker to create a simulated stereo audio experience. The experience isn’t bad for sure but definitely pales when compared to true blue BoomSound speakers. 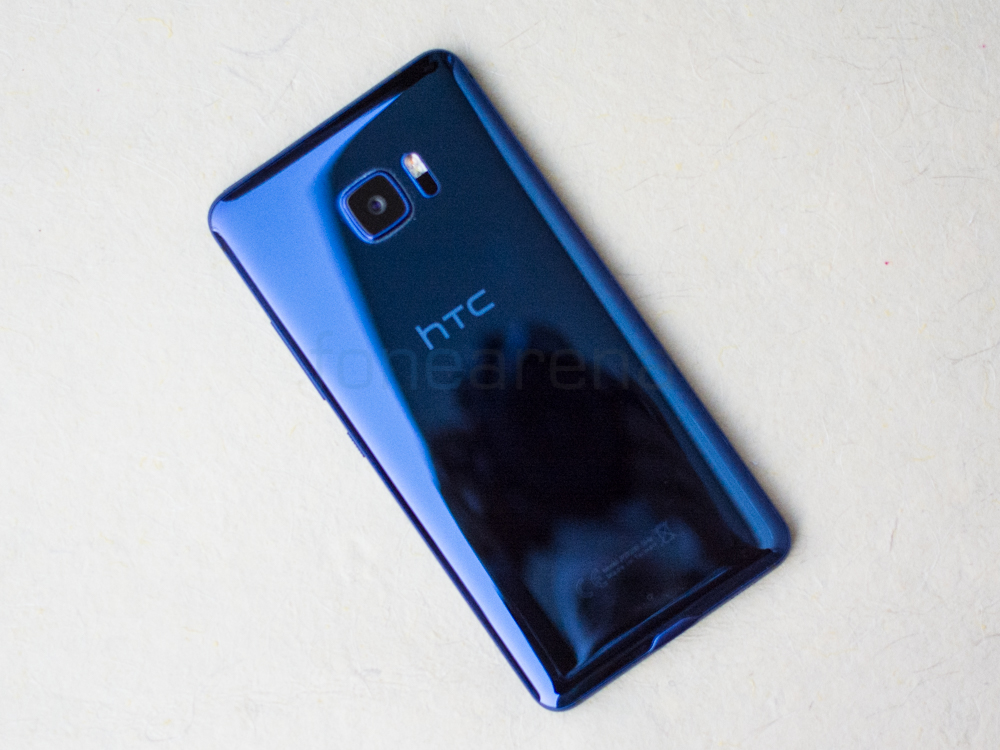 Flip over the phone and the only defining feature is the camera module alongside the dual LED flash and laser autofocus module. The entire camera module stands raised from the body of the device and is susceptible to scratches. The construction of the device is aluminIum and over at the back it has been polished to a sheen. The finish is extremely glossy, prone to fingerprints and is slippery to boot. The phone also weighs over 160 grams making it all the more susceptible to falling out from your hand.

In terms of software, the U Ultra runs Android 7 with a fully customised interface layer on top. Sense UI has been around for quite some time now and the software is quite refined in its latest iteration.

The interface continues a two level paradigm like regular Android allowing you to place shortcuts, widgets on the home screen. Tapping a shortcut button drops you into the app drawer.

Swiping over to the left most home screen brings up the Blinkfeed display panel. As always, you can customise this panel to display content from specific categories like tech, travel in addition to regular breaking news items. HTC also makes it easy to add content from your own personal social media streams so that you can access all the info in one single place.

Not quite stock Android, there are a number of software additions including a theme store. Another app called Boost+ helps you manage and optimise background apps. It also lets you clear out the memory though given how Android operates, apps like this aren’t really necessary. 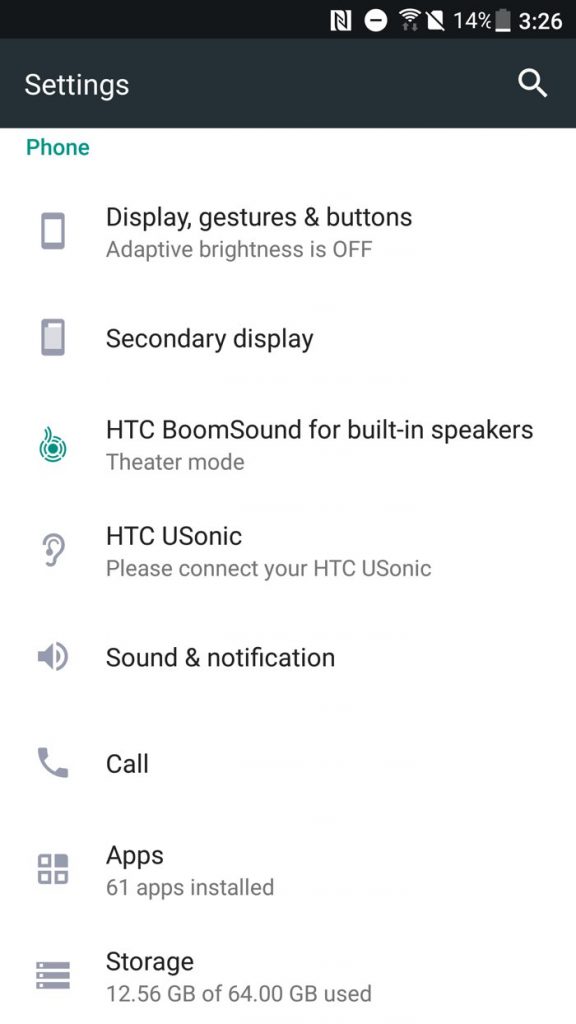 There are of course software hooks that tie up with the hardware enhancements on board the HTC U Ultra. The BoomSound toggle lets you adjust audio performance. Unlike the HTC devices of yore, the U Ultra doesn’t quite have dual front firing speakers but it does combine the earpiece and bottom firing speaker to simulate surround sound. Similarly, the USonic app lets you create a custom audio profile perfectly mated to your own ears. This however works only with the HTC USonic earphones.

Of course there is a menu setting to manipulate the secondary display on the HTC U Ultra. Options here are minimal and you can choose when to switch the display on. Additionally you can also manipulate the order and more specifically which of the second screen panels get displayed.

The phone itself is powered by a Quad-Core Qualcomm Snapdragon 821 64-bit processor with the Adreno 530 GPU. Paired with 4GB of RAM, the hardware is right in line with all the current flagships. As expected performance is pretty good though the way that Sense UI works, it might seem a tad bit slow. Navigation through the interface is smooth but always appears to be lagging behind the input. We’d chalk this down to the way that Sense UI works and not on any lags in the hardware. That said, we did observe that the phone has a tendency to heat up during extended operation and more specifically while gaming. 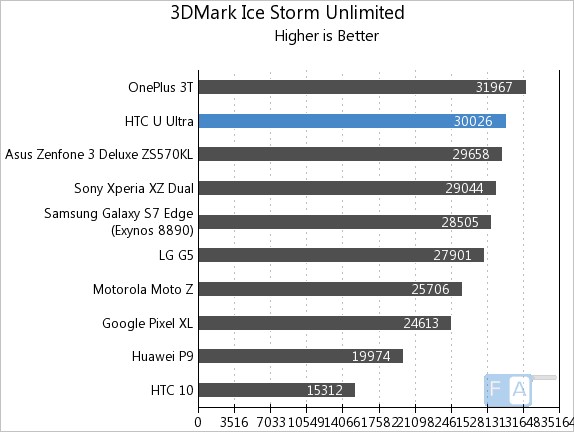 In the 3D Mark Ice Storm benchmark, the U Ultra slightly lags behind the OnePlus 3T. The phone scores 30026 points which is in line with other Snapdragon 821 powered phones. 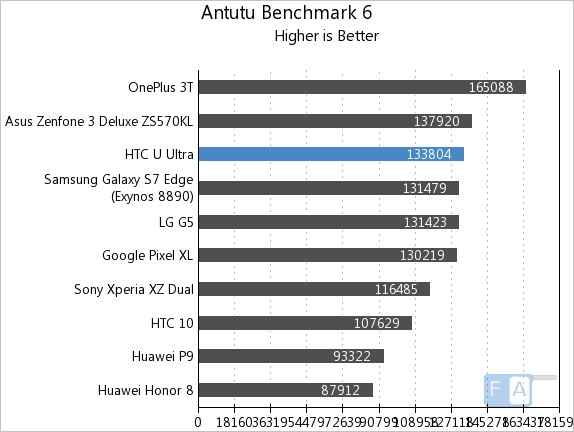 In the AnTuTu benchmark, the phone scores 133804 points which makes it very competitive. That said, the OnePlus 3T blows away the competition.

The 5.7 inch Quad HD Super LCD display is sharp and gorgeous to look at. With a density of 515.3 pixels per inch, icons and text look tack sharp and jagged edges are more or less impossible to detect. The same goes for the 2 inch secondary screen that has a similarly DPI. 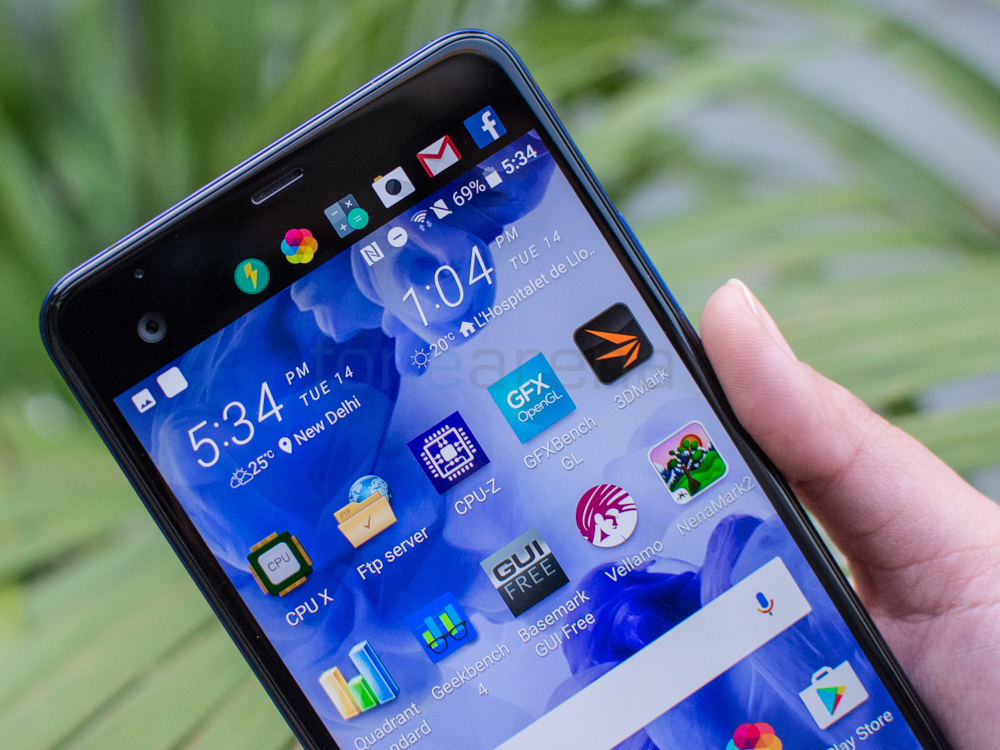 Coming from a sea of AMOLED panels, the somewhat muted but natural colors on the LCD display here look quite good. Whites however aren’t quite perfect and even at maximum brightness, there’s a yellow-ish cast to the screen. Talking about brightness levels, outdoor visibility is perfectly adequate though it doesn’t quite match up to the eye searing levels offered by other high-end phones. A peeve of ours is that the secondary screen is a part of the main panel and since it isn’t an AMOLED display, it never completely switches off even when not displaying something. If you decide to switch off the secondary panel, you’ll still observe a mild grey-ish display.

HTC has always tried to push the boundaries of camera capabilities. Unfortunately, the end results have always fallen a bit short. It appears that this is the case on the HTC U Ultra as well. The software doesn’t handle dynamic range all that well and even with HDR shots, the end results tend to have overblown highlights. 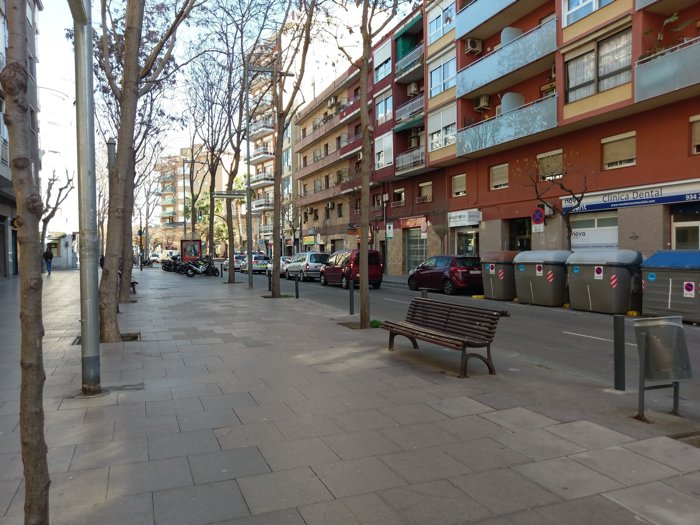 Moving on, focussing is accurate but surprisingly slow for a device equipped with a Laser Autofocus module. Despite on-screen feedback saying that the camera has a focus lock, it continues to hunt for another second or two before getting the image sharply in focus. This issue gets worse in low light conditions and is absolutely unacceptable on a 2017 device.

Generally though, the images are appealing to look at. The colors are natural and while the phone does tend to go a little overboard on noise reduction, it still retains quite a bit of details. The front facing camera is a 16MP unit and takes good-looking shots with a lot of detail.

Connectivity options on the HTC U Ultra includes 4G LTE, WiFi 802.11 ac (2.4 and 5GHz), Bluetooth 4.2 and GPS with GLONASS, NFC. There’s a USB Type C port along with USB 3.1 support for fast file transfers. The lack of a headphone jack means that the Type C port is what you’ll be using for audio output as well. The phone sports a Hybrid SIM slot and you can use the secondary slot to expand storage on the device. In terms of built-in storage, there’s 64GB of which around 12.5 GB is used up at first boot.

There’s no two ways to put it, the battery on the U Ultra is rather disappointing. The 3,000 mAh unit just isn’t sufficient for a phone of this size and specs. The only saving grace is the Quick Charge 3.0 support that rapidly tops off the battery. On an average, we struggled to make the phone last till the end of the day and had to top it soon after.

The HTC U Ultra is a drop dead gorgeous phone. If nothing else, the design alone is something that truly sets is apart. From the beautiful blue color and the ultra glossy back panel, the U Ultra almost looks like a piece of jewellery. Unfortunately, that’s more or less the best aspect of the HTC U Ultra. 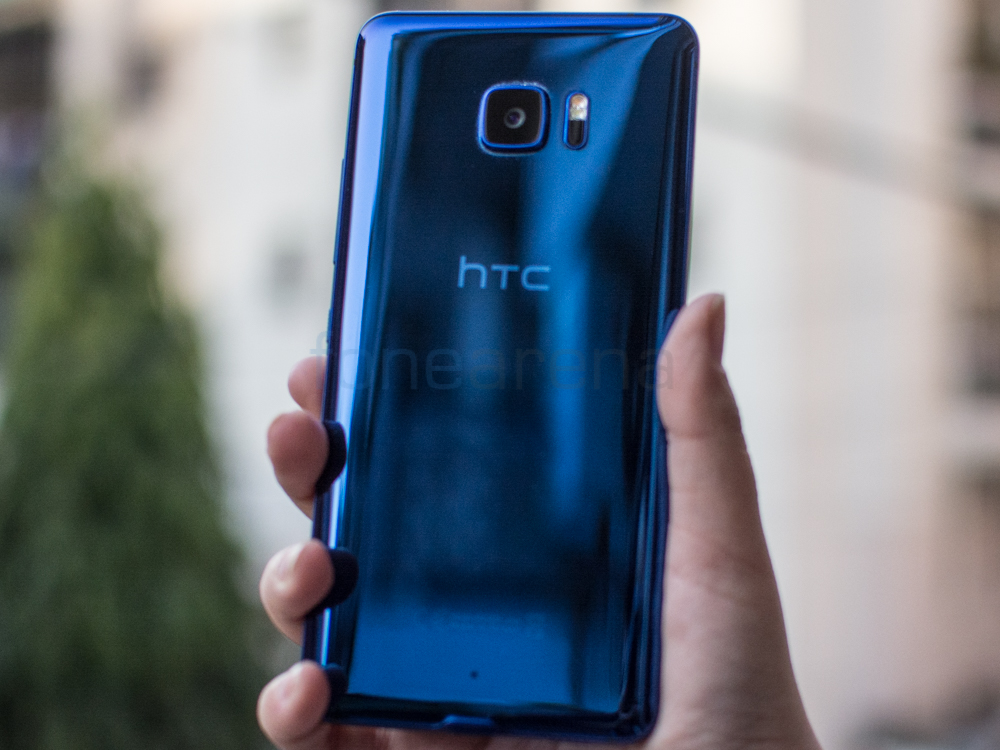 With the Snapdragon 835 right around the corner, the HTC U Ultra brings a year old processor, a not so great camera and performance that is always marginally lacking. Add to that the particularly poor battery life, it makes the HTC U Ultra a rather hard sell. The phone is priced at Rs. 59,900.