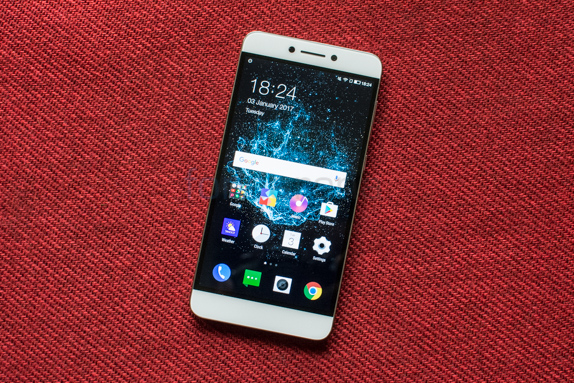 The Coolpad Cool 1 Dual was born soon after LeEco’s Jia Yueting took as Chairman. A phone that combines the best of LeEco and Coolpad’s technical capabilities and retains the essence of what makes each company distinctly unique, we’ve been testing out the handset over the last couple of days. Here’s our review of the Coolpad Cool 1 where we explore what we liked and disliked about the device.

The Coolpad Cool 1 takes inspiration from LeEco’s devices for its design. Not particularly original but we observed that the Cool 1 is still a visually appealing handset. The combination of a flat panel with black bezels on the sides and a chromed out rim that tapers off at the edges keeps the front simple but good-looking. Observe closely and you’ll see more than a passing resemblance to the LeEco Le 2. 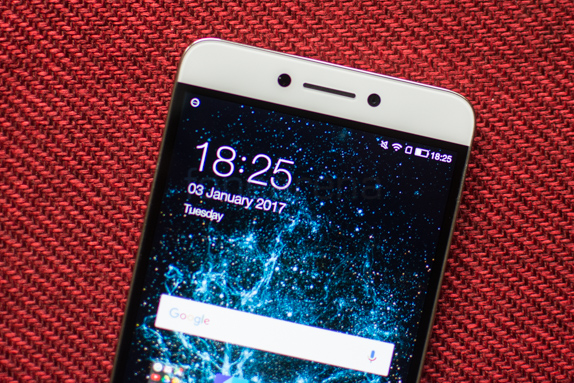 The front of the phone sports a 5.5 inch Full HD display with capacitive buttons below it. The buttons light up when touched. Up above the screen is an 8MP front facing camera alongside the usual array of sensors. A notification LED is also placed at the top.

Moving over to the right side of the handset, you get access to the volume rocker and power button. Both of these buttons are made of machined aluminum and offer great feedback and a resounding click on pressing down. The left side is where the Dual SIM cards slots are placed. The phone charges over the USB Type C placed at the bottom of the device while up at the top is the 3.5mm audio jack alongside the infrared port. 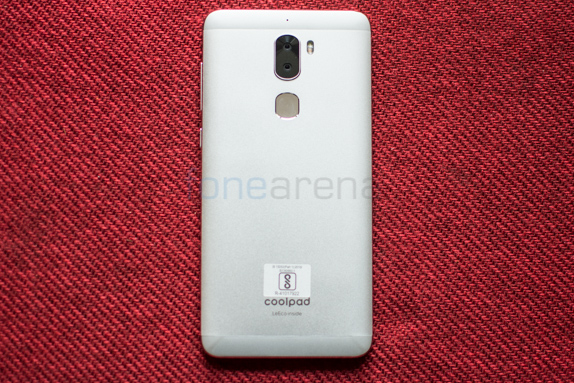 Flip the phone over and you’ll notice the metal back plate with plastic endcaps at the top and bottom. The rear panel is of course not removable and the battery is sealed in. Towards the top is the dual camera module placed in a raised island. It is accompanied by a Dual LED flash placed next to it. Finally, in a design element picked up straight from LeEco’s devices is a fingerprint scanner that has been polished to a sheen. 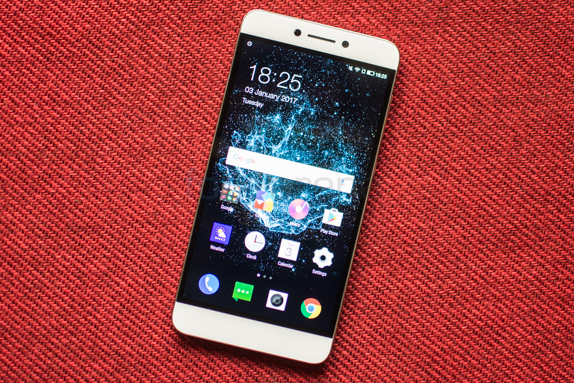 Unlike the Cool UI running Coolpad phones of yore, the Cool 1 runs EUI. We’ve seen this software build on LeEco devices and it symbolises the increasing synergy between the two brands. We love the fact that this time around, EUI does not have any of the extraneous television and streaming services tacked on to LeEco’s devices.

The first thing that you’ll notice is the lockscreen which has a large wallpaper, clock below it. On the right hand corner is the camera shortcut. Swiping up from here will drop you straight into the homescreen. Unlike stock Android, the homescreen emulates the iOS way of doing things. There’s no secondary app drawer and all apps are placed on the homescreen itself.

The notification shade is accessed by swiping down from the top of the screen as usual. The notification toggles on the other hand have been moved down to the bottom of the screen. Pressing the multitasking key activates a secondary menu that includes a number of shortcuts. Up at the top is a row of icons that includes shortcuts for the IR Remote, camera, calculator and more. These can be adjusted where you need them in the row. Below this is a widget for the music player and a slider for adjusting the display brightness. The last two rows are relegated to the usual array of toggles for WiFi, Data, Rotation and more. Finally you have the multitasking view where you can swipe between open apps and switch to them as you wish.

In sharp contrast to LeEco’s offerings, there is practically no bloatware on the Coolpad Cool 1. Beyond the stock apps onboard, you get a Yahoo Weather client as well as Xploree Keyboard. All other customisations have been integrated into a single app dubbed as Phone Manager. From here you get the ability to lock down specific apps, manage autostart capabilities, control data use and much more. While we could’ve gone without the app, this approach is still much better than having a separate app for all such features.

The Coolpad Cool 1 runs on an Octa-Core Snapdragon 652 processor with four Cortex A72 processors clocked at 1.8Ghz and four Cortex A53 CPUs clocked at 1.2Ghz. This is paired with an Adreno 510 GPU. The combination of Cortex A72 and A53 processors allows the phone to alternate between high performance mode and those optimised for battery life. From a multitasking perspective, the phone ships with 4GB of RAM, which is definitely appreciated from a phone in the mid-range segment. All said and done, the performance is more than satisfactory. The phone flies through most tasks and even handles gaming with aplomb. We did not observe any slowdowns throughout the interface and even intense games kept a steady frame rate. We’ve included some benchmarks below which should give you an idea of comparative performance. 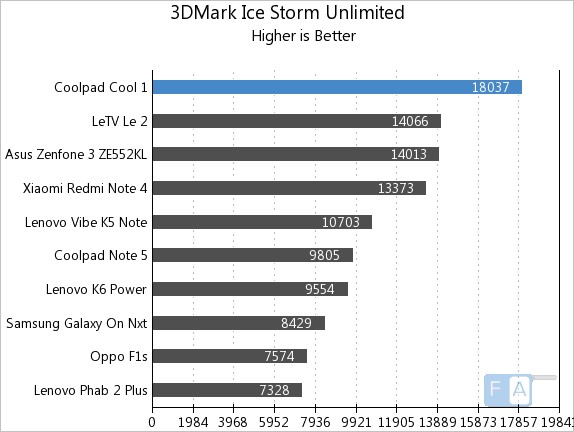 In the 3D Mark IceStorm benchmark, the phone scores 18037 points which placed it near the top of the benchmark. 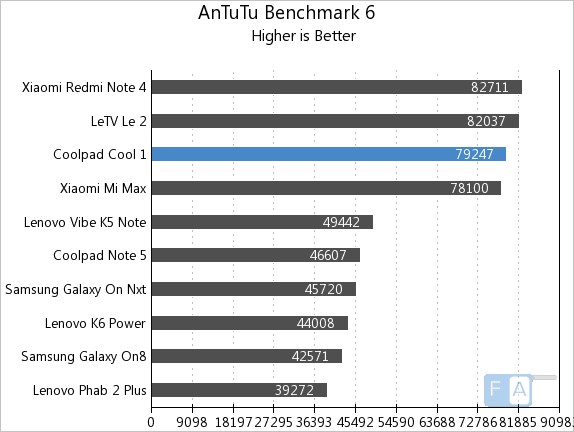 In the AnTuTu 6 Benchmark, the phone scored 79247 points which is close to the Redmi Note 4 which was at the top of the test bench. 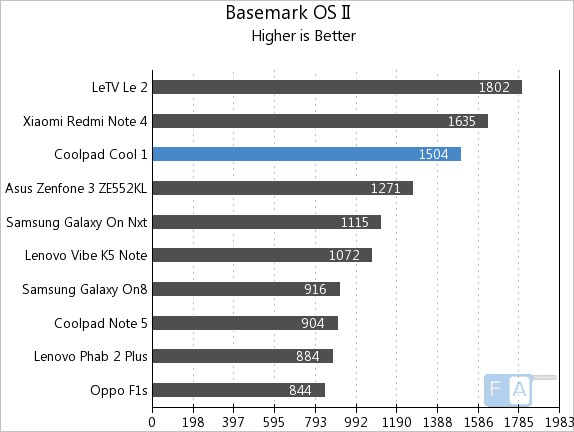 In the Basemark OS II benchmark, the phone scored 1504 points. 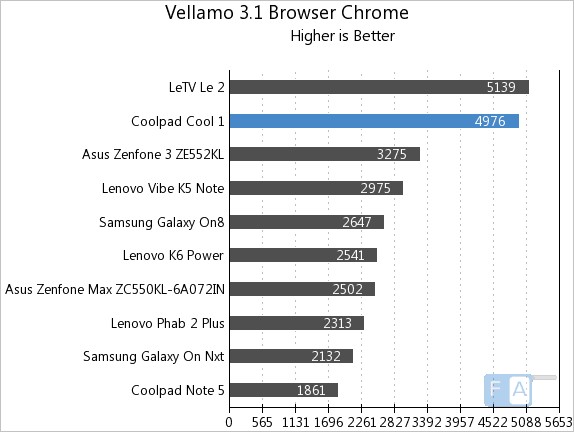 Finally in the Vellamo 3.1 browser benchmark, the phone scored 4976 points which is only below the LeTV Le2 in our test bench.

The 5.5 inch display on the Coolpad Cool 1 is about par for the course. What varies though is the quality of the panel. In our testing we noticed that the contrast levels on the panel is above average and color reproduction levels tend to be accurate. Worth appreciating are the eye-piercing brightness levels on offer which definitely comes in handy for sunlight visibility. Outdoors the display can occasionally appear washed out but not enough to be a deal breaker. 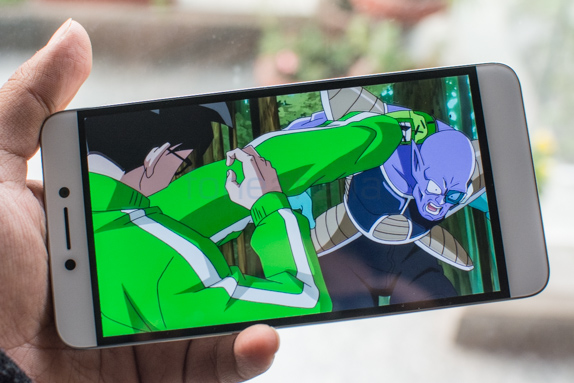 A built-in utility lets you adjust the color temperature. The default saturation should satisfy most users but you can switch to a more neutral or warmer shade should you prefer that.

While the rest of the phone is a solid but familiar offering, there is one feature that sets the Cool 1 apart. The dual cameras set in an island at the back of the phone work in tandem to improve image quality. The handset features two 13MP cameras with one of them being a monochrome unit. 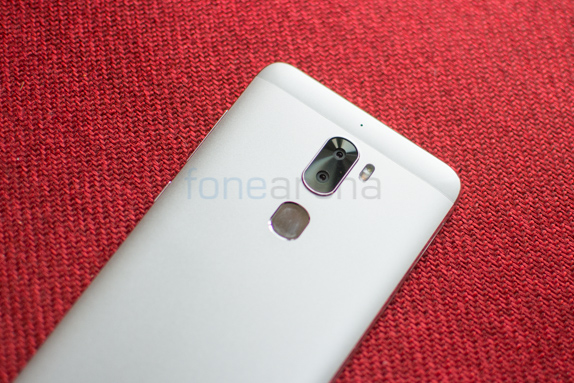 There’s Phase Detection Auto Focus onboard which we found to be somewhat hit or miss in actual performance. There’s a dual LED flash placed next to the camera module which is good enough for emergency use but given how it tends to blow up the subject, we’d advice against using it.

The camera can also perform some nifty software based processing where it can simulate different apertures and lets you create a variable depth of field effect. The images above should give you a better idea of how this works. The photograph on the left does not have any additional processing done on it while that on the right exhibits an image shot with a simulated depth of field effect. As you can see, while the bokeh is fairly natural looking, the software struggles to locate definite edges and you can see the softness creeping over the subject.

In terms of connectivity features, the phone is equipped with 4G VoLTE capabilities as well as WiFi 802.11 ac (2.4/5 GHz). The phone supports Bluetooth 4.1, GPS and charges over USB Type C. There’s an infrared sensor placed along the top edge of the phone that can be used to control all manner of consumer goods. It’s not too common to see these on phones these days and we certainly appreciate the addition. Built in storage is limited to 32GB of which 22.8GB is available at launch. Unfortunately the phone does not have a micro SD card slot. While we prefer dedicated slots, a hybrid slot too would’ve come in handy. The phone has dual SIM card slots built into the left side.

The 4,000 mAh battery built into the device ranks right up there with our favorite features of the device. While not an entirely unique feature, the long-term usability afforded by the large battery can’t be beat. We easily got close to two days of usability out of the phone. When you do manage to run down the charge, you can quickly top off the battery thanks to fast charging support.

The Coolpad Cool 1 offers a package that punches well above its weight. With great performance, a display that is as good or even better than most of the competition and build quality that impresses, there’s very little not to like about the Cool 1. 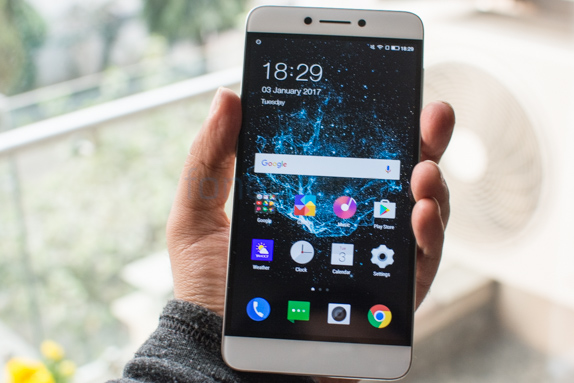 On the other hand, the limited 32GB of storage disappoints. The lack of expandable storage makes this a bit harder to deal with. The camera too is promising on paper but real world performance was less than ideal. At a price point of Rs. 13,999, the Coolpad Cool 1 makes for a very compelling option and provides stiff competition to the likes of Xiaomi’s Redmi series of phones. It will be available exclusively from Amazon.in starting from January 5th, 2017.