The Hasselblad TrueZoom Camera Mod for Moto Z phones is marketed as being the ultimate tool for professionals and enthusiasts who want to take the highest quality picture possible while being able to readily edit and share it on their social platforms. Let’s find out how it does in the real world.

What is a Mod? 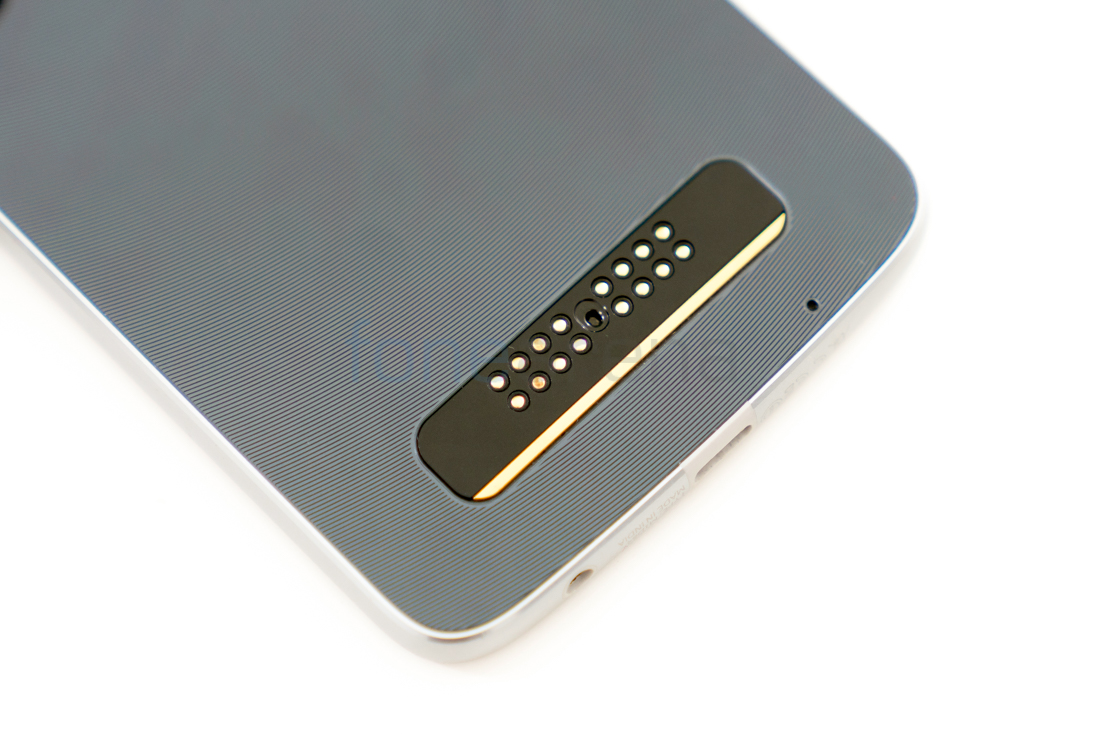 A Mod is a modular add on that Lenovo have come up for their Moto device platform. As of now, the Moto Z as well as the Moto Z Play support the modular platform and there are various mods to choose from. Each mod can be attached to the back of the device to enhance the functionality of the devices. As of now, the current Moto Z and Z Play as well as the Mods are based on Platform 1.0 of the modular system and Lenovo has promised forward compatibility of devices that release in the future. 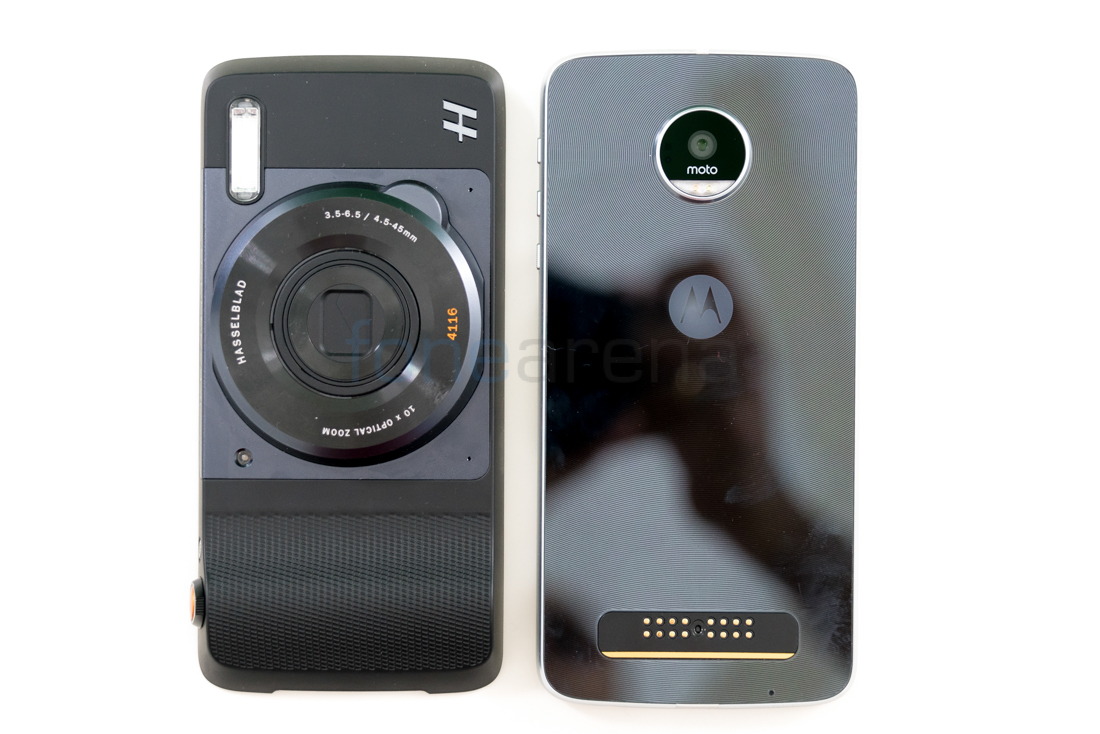 However, they haven’t promised that the existing Moto Z and Z Play devices will be able to support the future Mods released by Lenovo which maybe based on a later version of the modular platform i.e higher than 1.0. But at least, forward compatibility of the mods itself is a huge bonus and the lack of which was one of the many reasons why the LG G5 modular system failed. 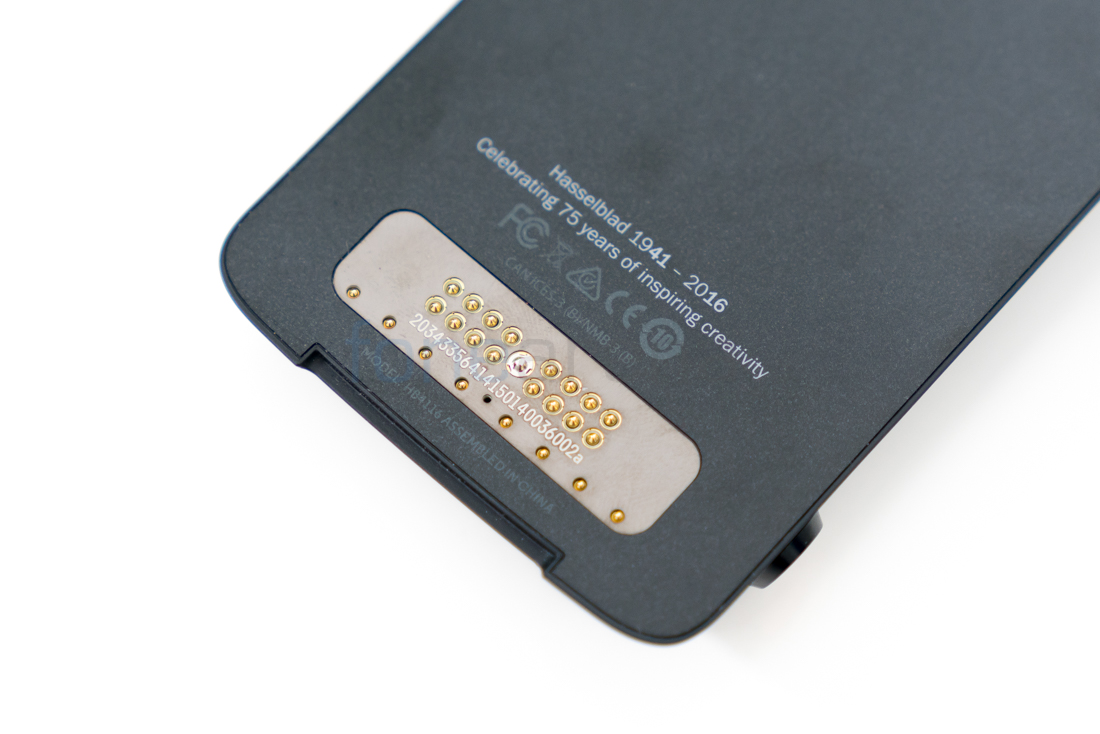 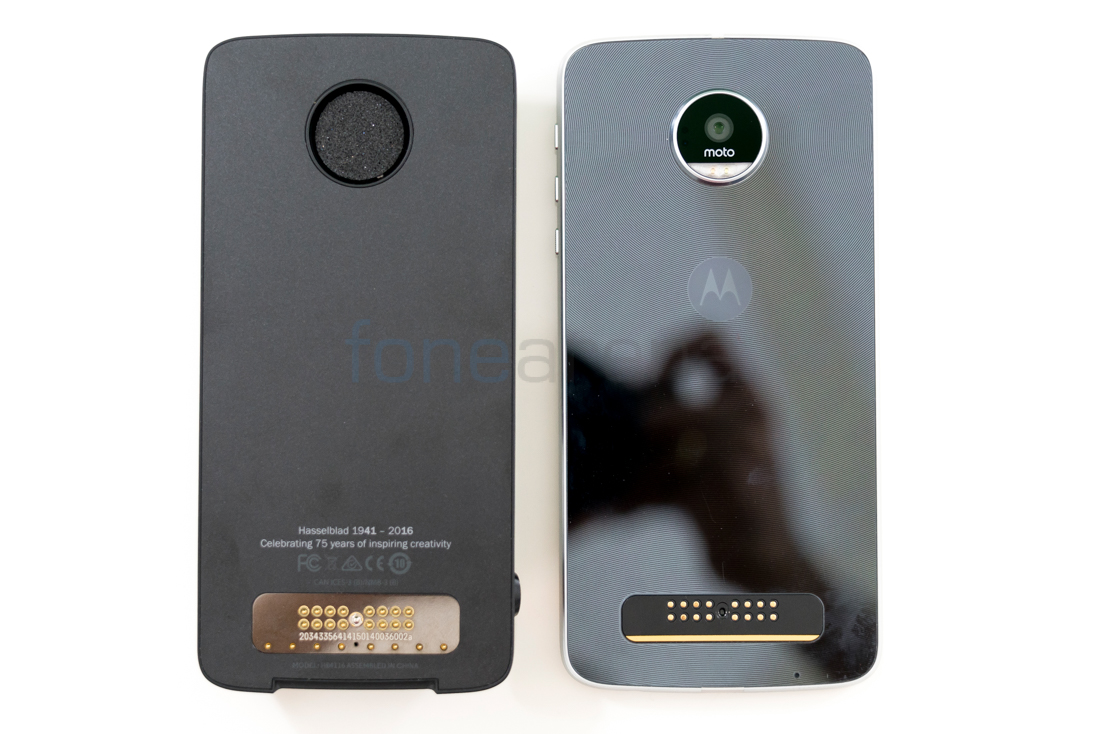 The Hasselblad TrueZoom Mod features a magnetic design that latches onto the back of your Moto Z device and connects itself to the 16 pin connector at the bottom rear of your device. The magnet is strong enough to attach itself without needing for much effort however, it can also on some occasions go out of alignment and you’ll have to make sure that the Mod is fitted properly for it to work. 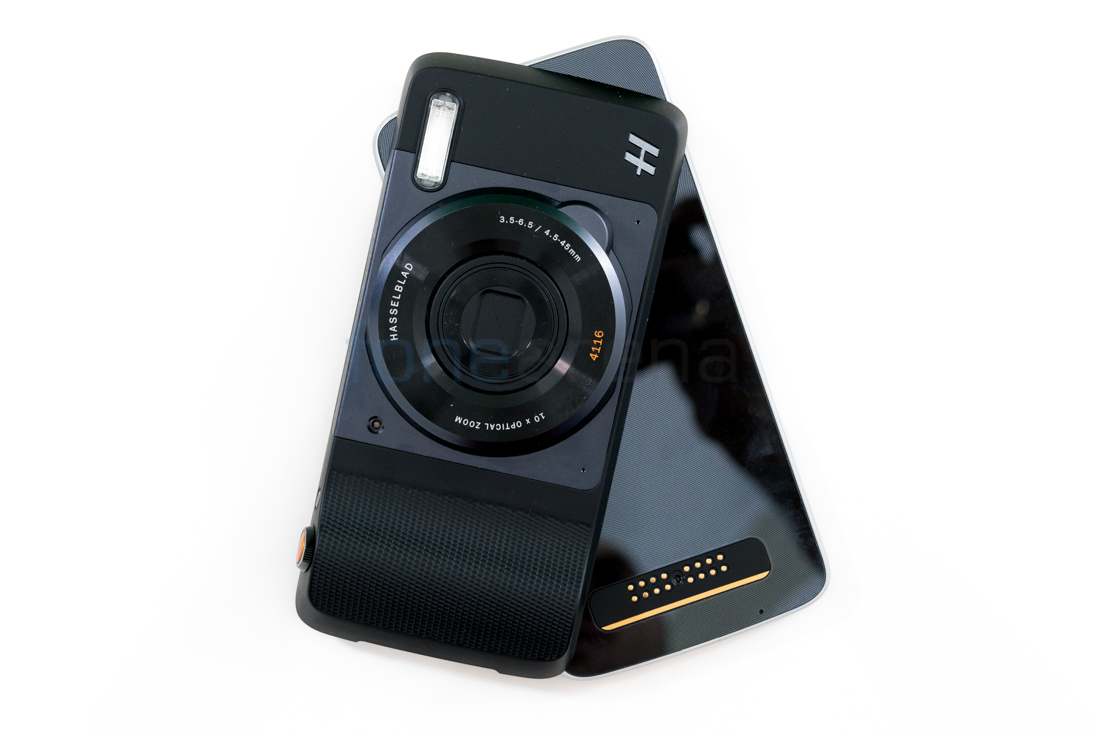 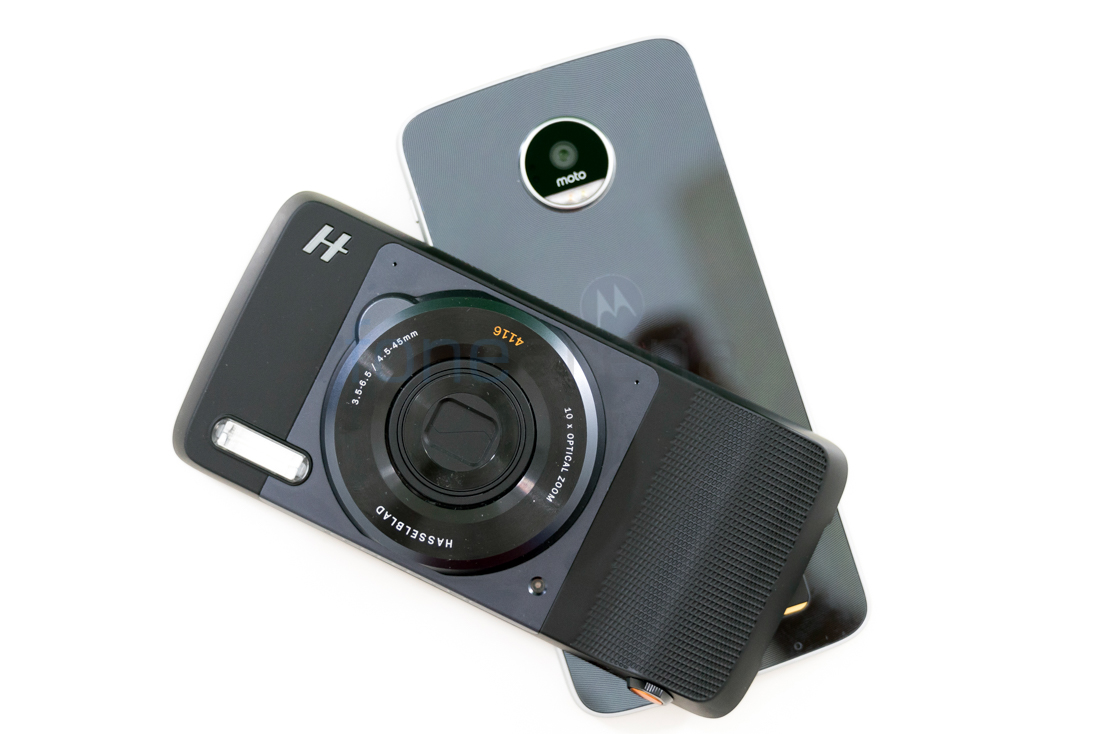 The Mod adds a much needed camera grip which enhances the ergonomics and makes photo capturing much more intuitive as well as stable. This is true especially on the Moto Z which can be too thin for stable shots. It does add quite a bit of bulk and weight to it but that is the entire point of the design. The grip and most of the surface is rubberized for more “grip” but the central portion that houses the lens module has a bluish violet colour with a soft touch finish.

On the inner side, there is a foam padding as well as a cutout for the phone’s camera since the Hasselblad mod has a camera of its own. The Mod’s camera is quite large and protrudes quite a bit from the casing. In fact, it protrudes even more than the grip and we feel that Moto could’ve made the depth of the grip same as the height of the modular protrusion to provide an even better feel and handling. It would also have been good if they had fitted tiny rubber or plastic stubs to the lens module since that would’ve prevented the device from sliding about and also protected the module from wear and tear.

You have a Hasselblad branding on the side, a Hasselblad “H” logo to the bottom right, a Xenon flash at the upper right corner as well as a focus assist light to the left of the lens. Adjacent to the Hasselblad branding on the side, you can also find the power button and zoom lever which also houses the two stage camera shutter key. The power button as well as the zoom level are quite nice and give good feedback. However, the shutter button gives too soft a feedback and you often end up clicking the photo instead of just focusing on an object.

Since the Mod adds quite a bit of bulk and a camera mod isn’t necessary all the time, Moto also bundle a carrying case for the Mod that allows you to store the Mod safely without causing harm to it. The case is made of fabric but has metal plates at the top and bottom as well as a magnetic flap, a Hasselblad “H” logo and a lanyard.

The lens has a mechanical shutter and protrudes out once you turn it on. Zooming in further pushes the lens further out from the body as well. The weirdest thing is that despite marketing it as a camera tool for Pros or Prosumers, there is no tripod mount for the Mod. 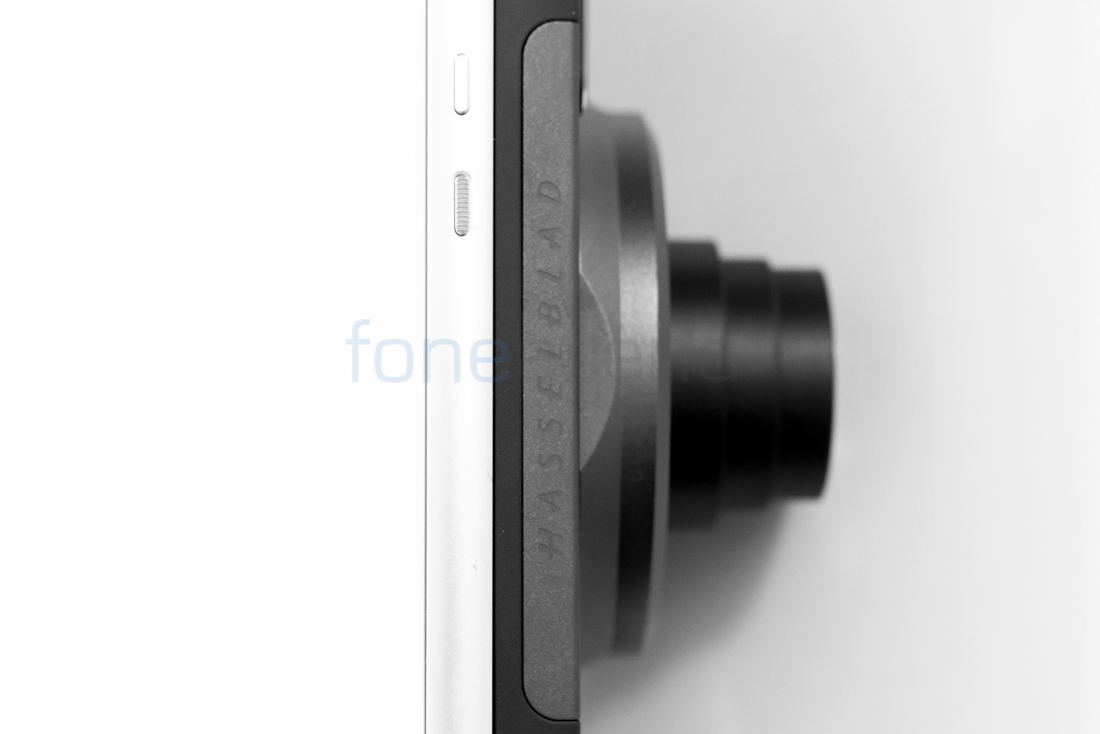 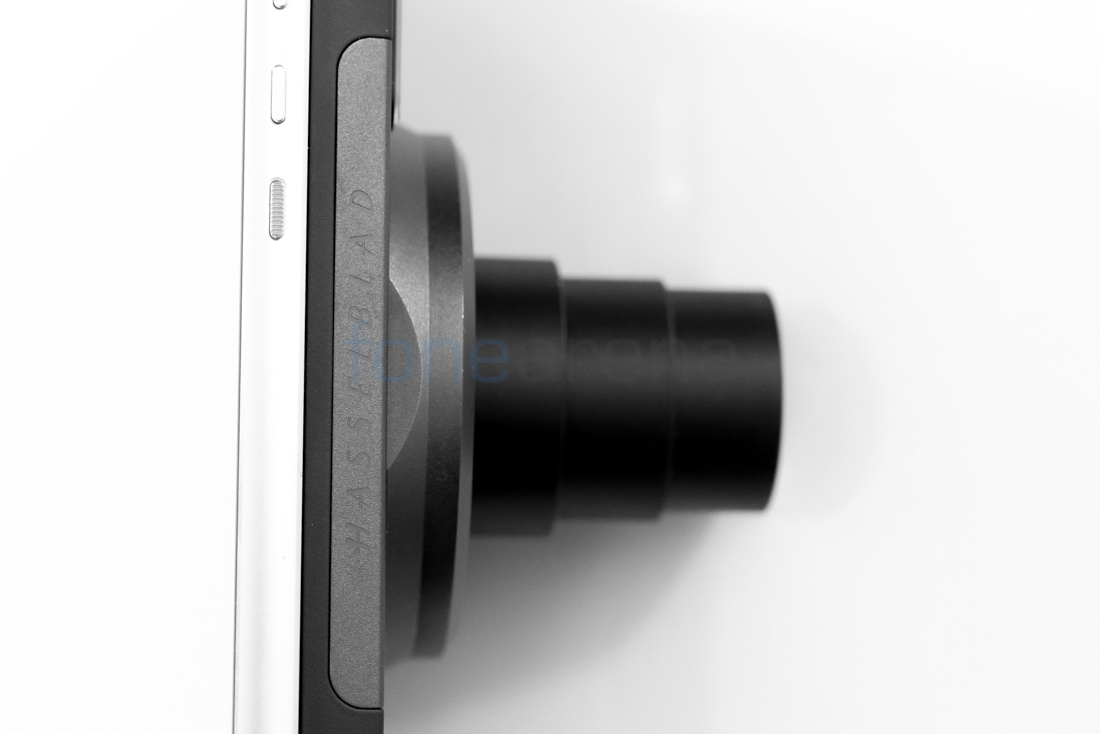 The main purpose of the Hasselblad mod is to provide a much better image quality than the built in cameras that the Z Play and Z provides. While the camera quality of the Z Play is still acceptable at the given price range, one would not expect Moto to have such an inferior built-in camera on a device such as the Moto Z. However, the primary purpose for this could be to sell the Mod itself. 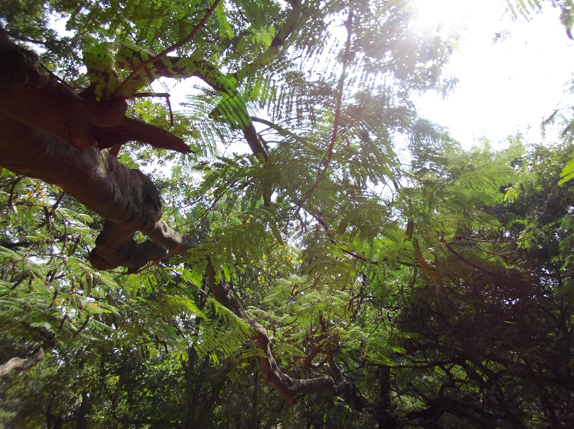 The Hasselblad Mod is pretty big in size but apart from the 10X optical zoom, the rest of the camera specifications are rather underwhelming. The sensor size is just 1/2.3 inches with a pixel size of 1.55 micron which is also what you would find on the Google Pixel and Pixel XL smartphones. However, considering the bulky design of the Hasselblad Mod, one would expect a 1 inch sensor inside of it. Sure, the optical zoom mechanism will definitely take up space but it is hard to believe that they couldn’t pack a better sensor inside it. 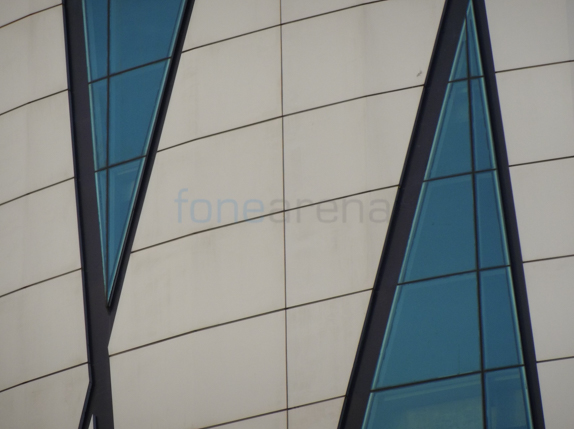 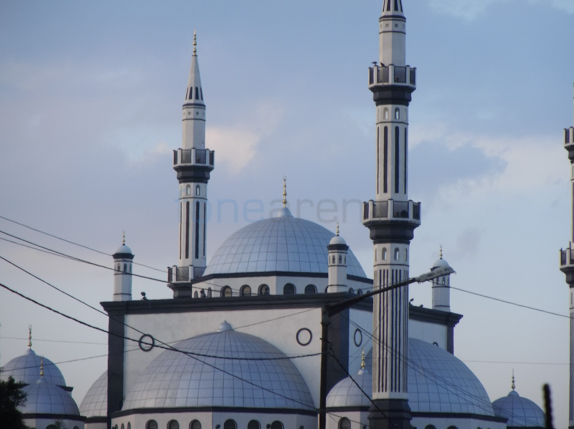 Either way, the sensor has a resolution of 12 Megapixels as well as a Xenon flash, 10x optical zoom (25-250mm in 35 mm equivalent), OIS and a red AF assist light. The aperture isn’t fixed but has a variable aperture of f3.5-f6.5 which again is surprising considering that many cameras out there come with a constant aperture throughout the zoom range. Moto could’ve at least had a fairly larger aperture at the widest focal length of around f1.8 or so.

Here is a low light photo captured by the TrueZoom Mod. 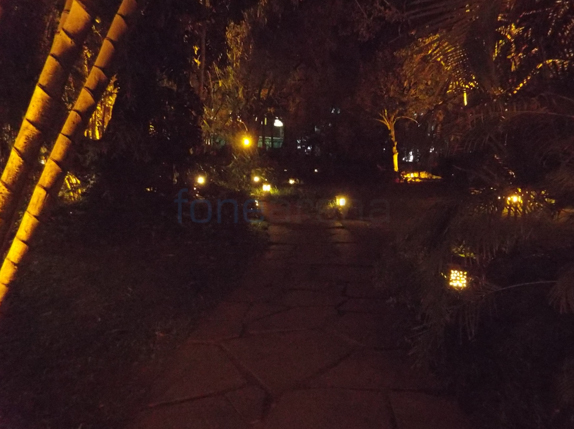 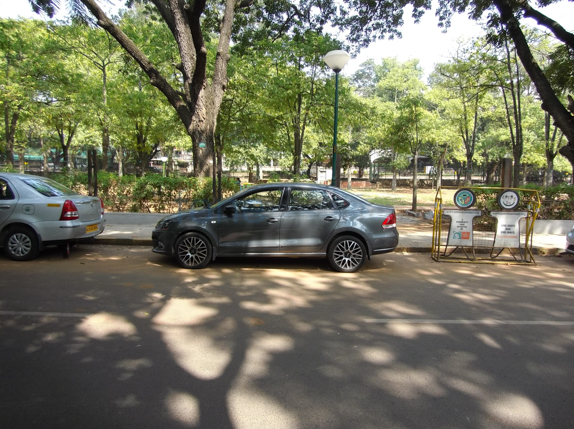 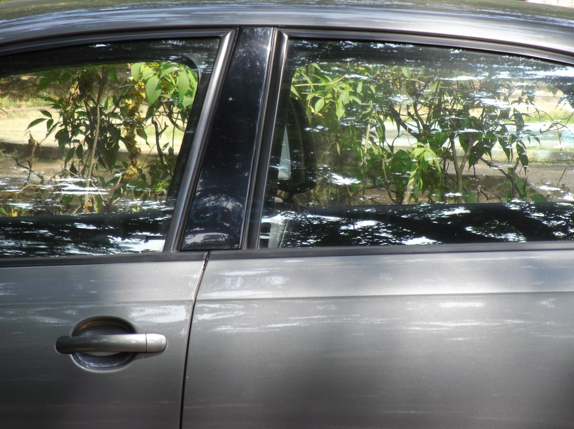 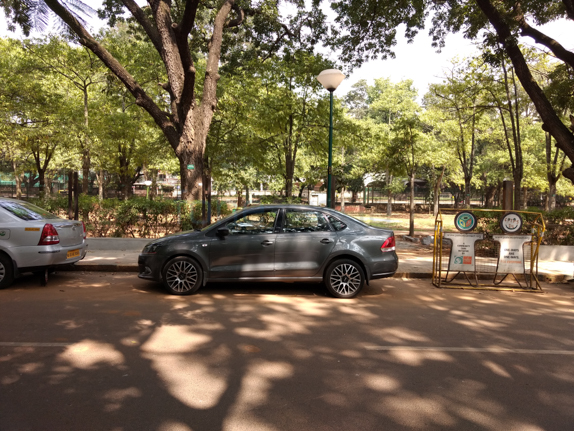 This really comes into play when you take images in low light. Although the sensor is small for something of its size, it still isn’t bad. In fact, it can be really good as proven by the Pixel smartphones. However, it is let down by the really narrow aperture. Low light shots on the TrueZoom are painfully underexposed and/or noisy. There really isn’t much to say about the low light performance other than the fact that it is really disappointing.

The photo below is a Panorama taken with the mod.

You would think that the Mod would perform wonders in good lighting conditions at least but you would be wrong. There again, the quality is decent but not enough of a jump to warrant you spending the kind of amount that Moto and Hasselblad are charging you for it. The shutter speed too is really laggy and the focus fails most of the time and even when it does latch on correctly, it is dead slow. There is a manual mode where you can choose the focus, White Balance, shutter speed as well as ISO manually but the story about the quality remains the same. 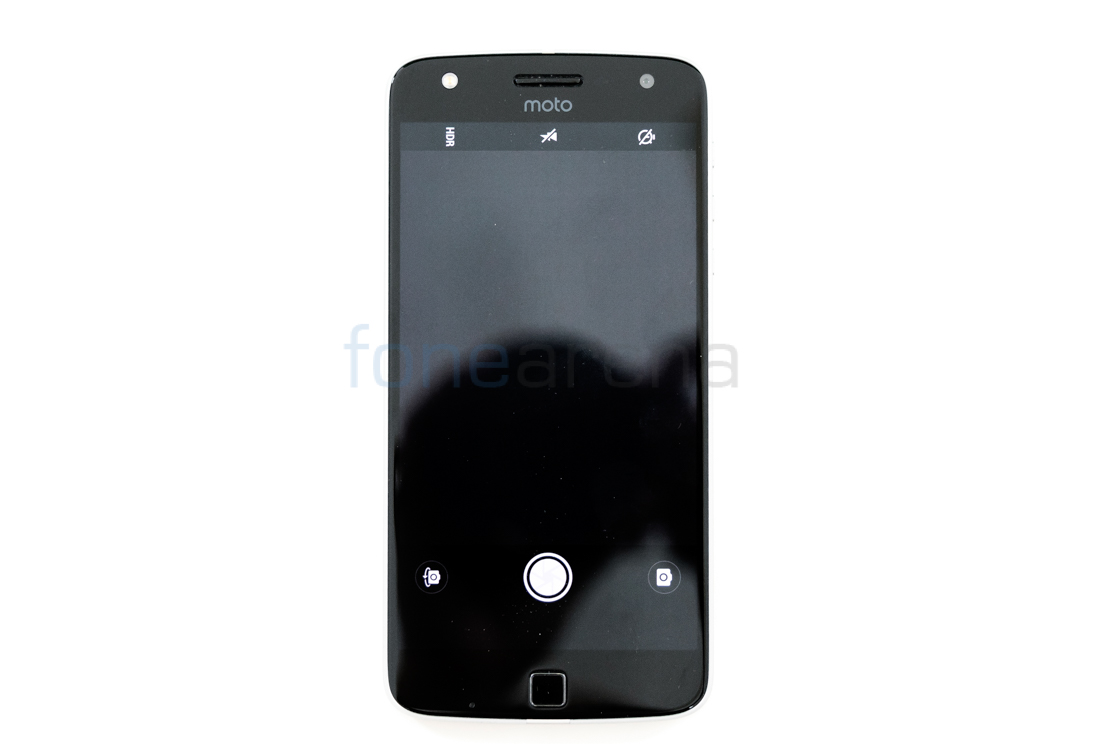 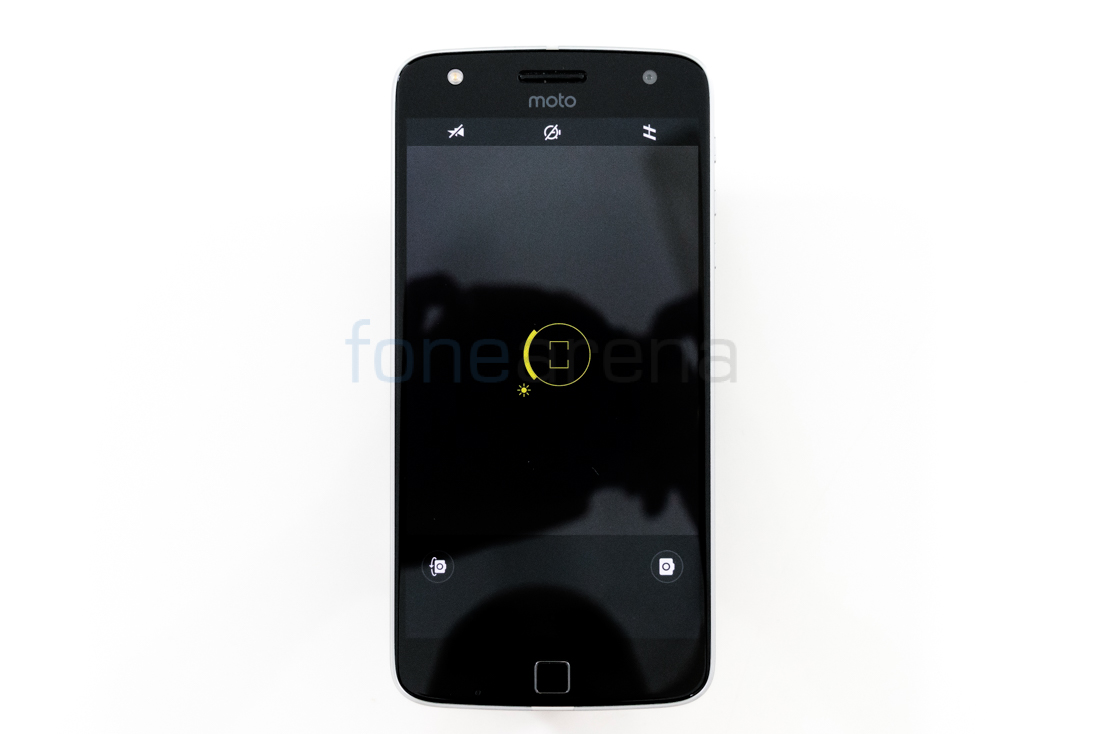 The only real salvation is the 10x optical zoom which can provide a new perspective and allow people to capture and compose photos in a way that they never imagined with a smartphone before.

Below is a photo taken using the widest focal length and then at the 10x optical zoom limit. Had we used digital zoom, the third picture is what we would’ve gotten. This just shows how much of a difference optical zoom makes in the quality of photos. 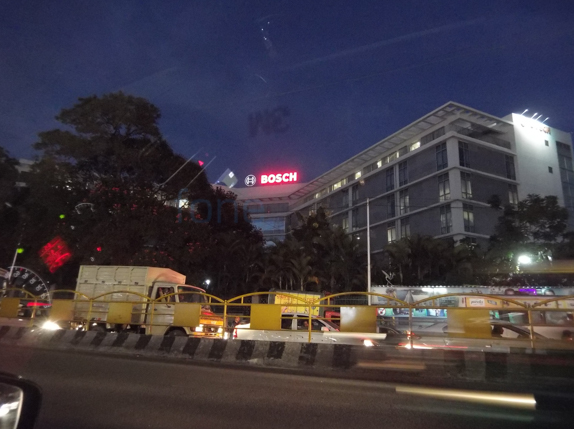 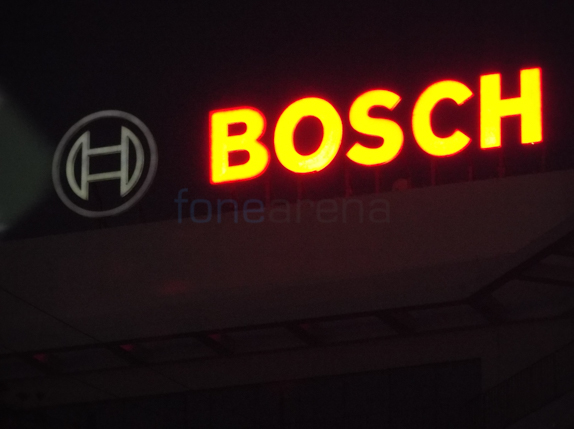 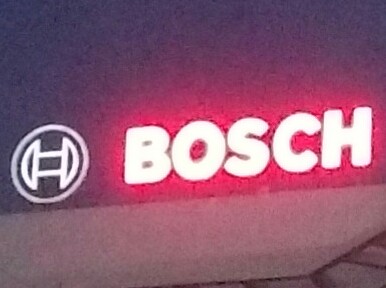 The Mod also enables RAW capture which is not a feature that is found on the Moto phones by default. You also have a Black and White capture mode but it just desaturates the photo and isn’t really a Monochrome mode with a Monochrome sensor like on the Huawei P9.

OIS does help to keep things steady a bit but the slow shutter most often ruins the shot unless you are careful especially at the longer end of the focal length. The flash is really powerful and is enough to capture group photos in low lit places but even then it doesn’t really look very pleasing. The main thing missing in the camera UI is the lack of an HDR mode.

Video is yet again a disappointment since it maxes out at 1080p. The video is quite soft and lacks sharpness and detailing. The only good thing is that it still has EIS even though it doesn’t help much. However, that also becomes useless if you zoom in and is mainly usable only at the widest zoom range. 4K video might not be available due to limitations of transmitting such high bandwidth of data through the 16 pin connector. The videos also have issues with rolling shutter as is apparent in the videos below.

The TrueZoom Mod doesn’t have a built in battery and hence the battery life of the Mod and your phone is dependent on the phone itself. In our use case, we paired it with the Moto Z Play and since the phone already has amazing battery life, it didn’t really create even a minor dent in the battery life. However, it may be a totally different story for those who use it with their Moto Z. 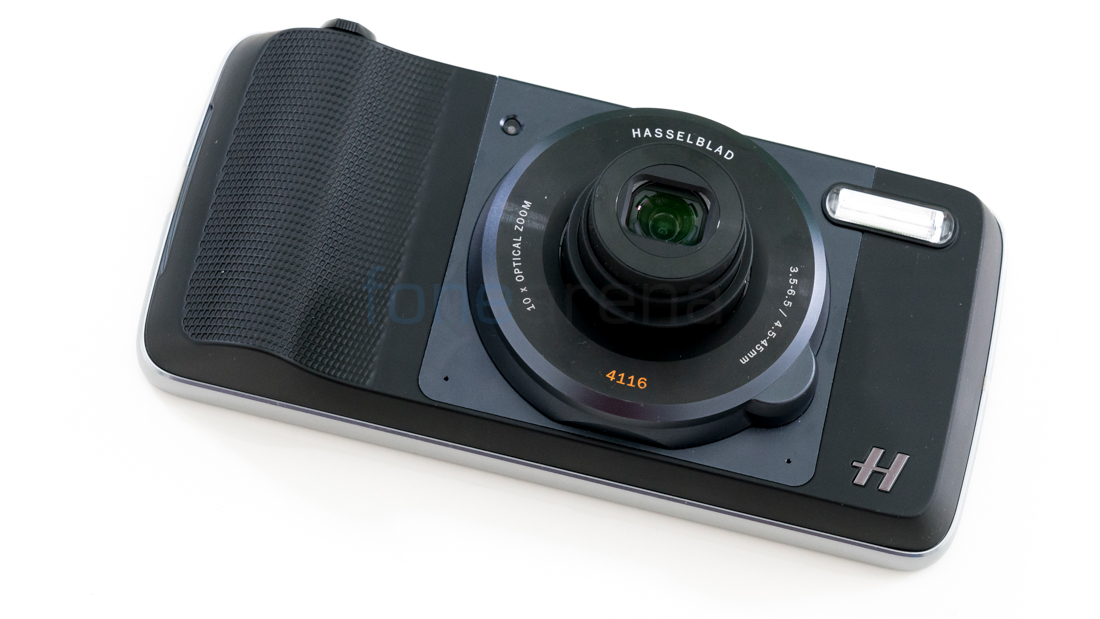 The Mod also requires power to push the lens out or in so you will need to turn off the module or exit the camera app first before removing the Mod or else the lens will remain extended and you will have to reconnect it to draw it back into the casing. So since it requires external power, it is quite difficult to calculate just how long the Mod and phone will last you. Either way, it would be advisable to remove the Mod from the back of the phone when not needed.

The Hasselblad TrueZoom Camera Mod from Moto might sound like one hell of a accessory for your smartphone. However, it is far from it. The image quality is decent but far from breathtaking or revolutionary and that would’ve stayed my verdict even if it was a built in camera. 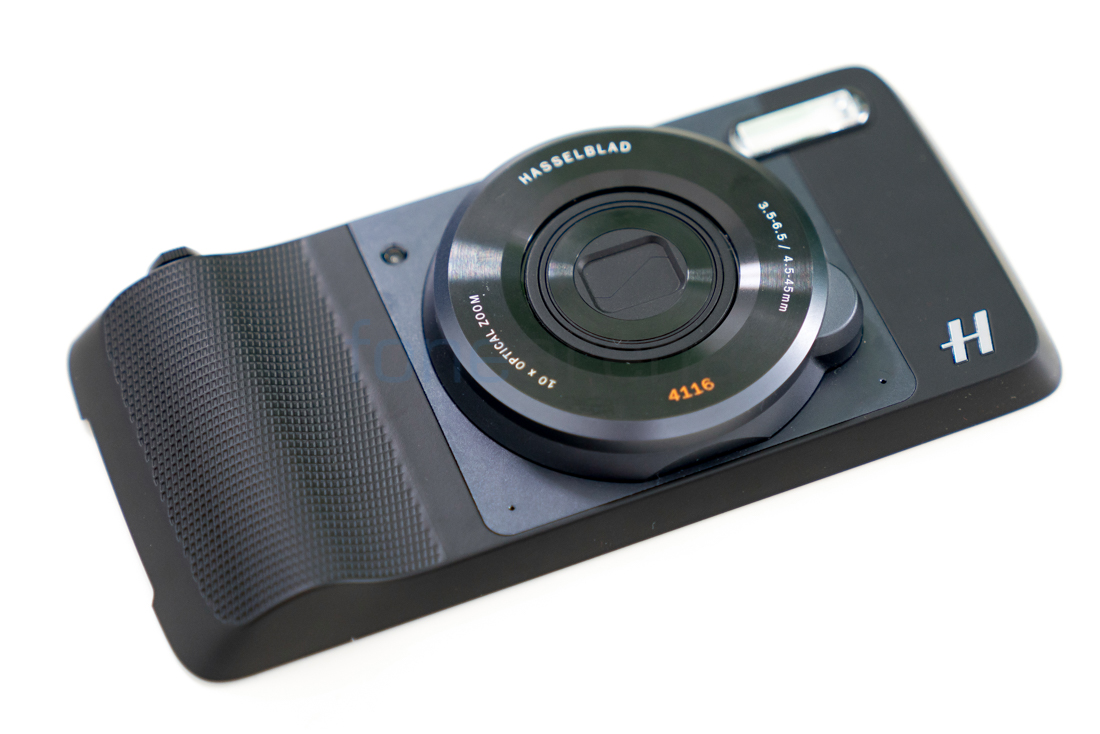 However, when it is an accessory that costs almost as much as a Moto Z Play and costlier than several point and shoot cameras out there which itself is a dying breed, you expect much much more but it fails to deliver. The zoom is the only good thing in this Mod but is not enough to tempt me into getting one nor would I recommend any of you to get it. Hopefully, we get a V2 of this mod that actually focuses more on the actual device rather than just on the branding.

The Hasselblad TrueZoom Moto Mod retails at Rs 19,999 but you can get a 5000 rupee discount on it if you buy it along with your Moto Z or Moto Z Play. my advice, just get the smartphones alone or maybe one of the other mods but stay away from this.