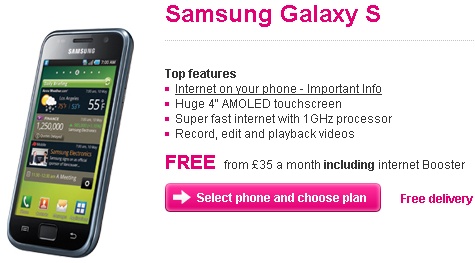 Samsung Galaxy S is one of the hottest device these days. Samsung has announced that they will launch the Galaxy S in 110 countries. They recently launched the Galaxy on all 4 major USA carriers, AT&T, Verizon, T-Mobile, and Sprint, and they also launched it in UK via Vodafone, Orange, and O2. Guess who’s missing? T-Mobile UK is missing but they announced today that they are now taking orders for the Samsung Galaxy S.

You can get the phone from T-Mobile UK for free by paying £35 per month and signing a 2-year contract. If you want to see more tariffs, then head-over to this link.You can check out the specs of Samsung Galaxy S over here.