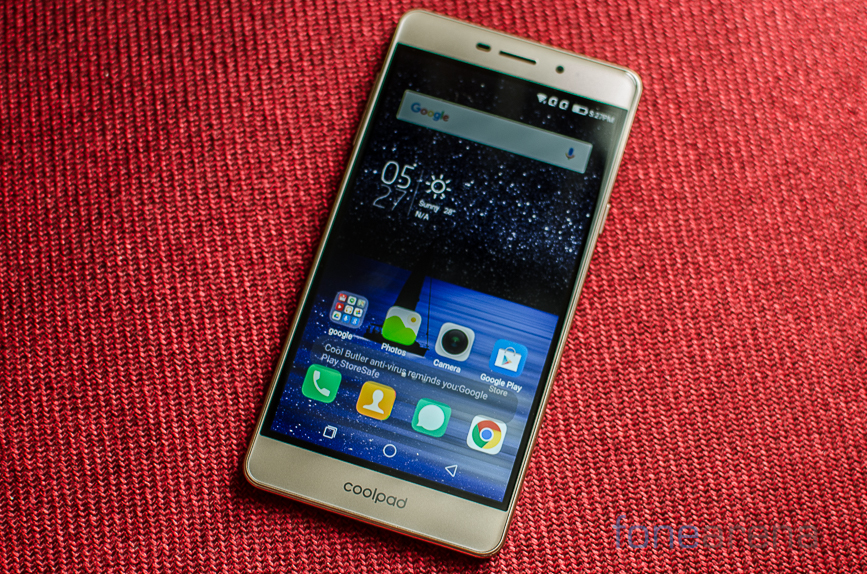 Coolpad has been upping its game in the entry-level handset segment. The Coolpad Note series of devices have been known to be consistent performers and bring a good price to performance ratio. Now with the Mega 2.5D, the company is focussing on a more fashion forward approach. The phone also targets the selfie loving audience with a focus on the front facing camera. Here’s the FoneArena review of the Coolpad Mega 2.5D where we explore whether the phone delivers on any of those counts.

Like the Coolpad Note lineup, the Mega also continues the all-plastic build but the difference lies in the approach towards design. The Mega 2.5D’s design while not entirely original is certainly a cut above anything the company has pushed out so far. The front of the phone looks inspired by the Xiaomi Redmi Note 3 but that’s not something that we’re going to complain about. 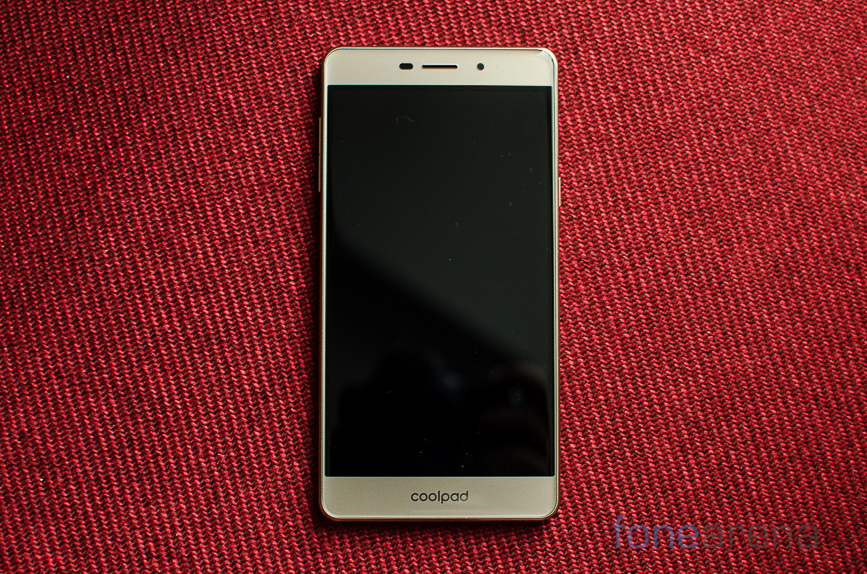 The 5.5 inch screen is covered a glass layer that curves on both sides leading to the 2.5D moniker. Just to be clear, it is only the glass layer on top and not the screen that curves over the edges. The gently curved edge melds into the frame running around the phone. Coolpad branding can be seen below the screen. The phone uses on-screen controls so there are no capacitive buttons here. Up above the display lies the 8MP front facing camera. 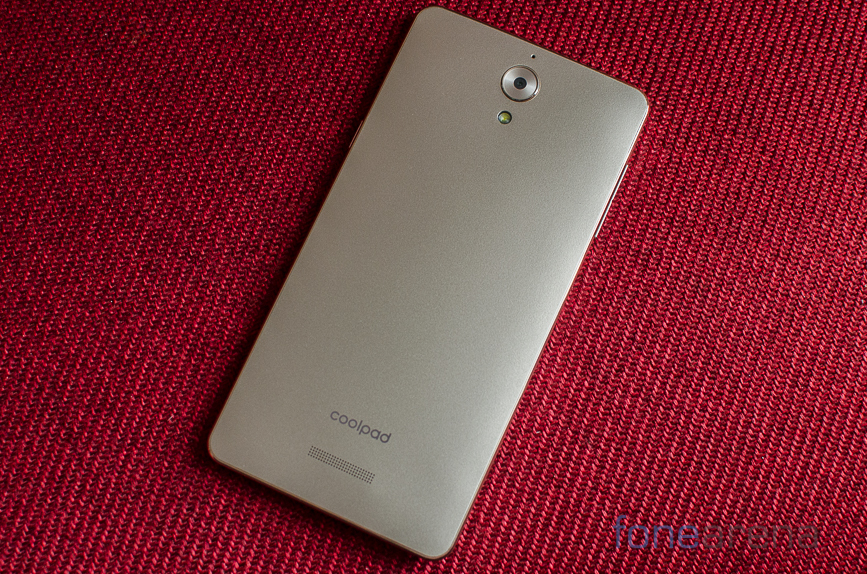 Flip the phone over and you observe a very minimalist back panel with a very small silkscreened Coolpad logo at the bottom. The camera module sits proud of the shell towards the top and has a single LED flash below it. The entire design language tends to be very clean adding to the visual appeal of the Coolpad Mega 2.5D. 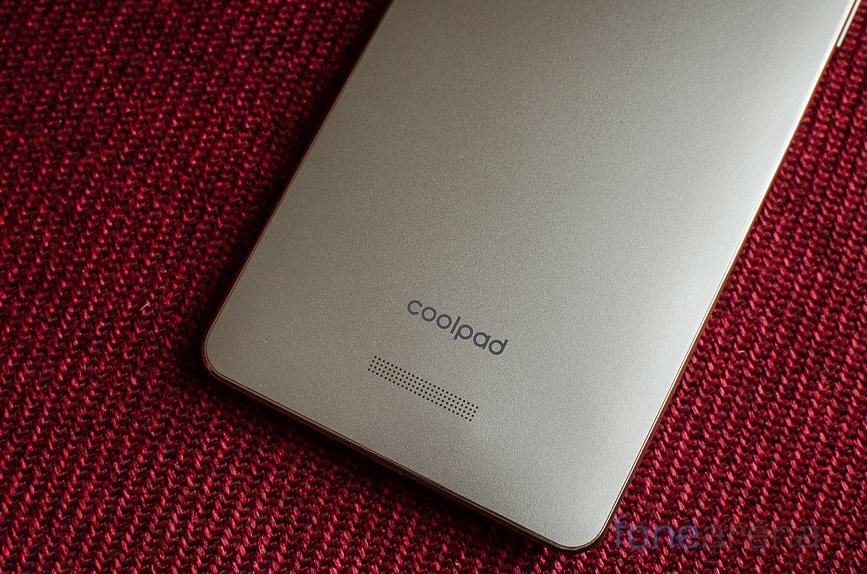 The phone measures 153×76.8×7.85mm which is reasonably compact for  a device with a 5.5 inch screen. Additionally, the 143 grams weight is on the lower end of the spectrum for the category making it a very comfortable device to hold. Assisting the ergonomics further is the very gentle curve of the back of the phone that makes handset fit seamlessly into your palm. All in all, we’re very happy to see the progress made here on a design front. While not revolutionary, the Coolpad Mega 2.5D’s design is very easy on the eyes and definitely ranks up there amidst its category.

Running CoolUI 8.0 based on Android 6.0, the Coolpad Mega 2.5D employs  a UI layout that has become far too common. A significant departure from how stock Android operates, the interface drops the app drawer as is common in many Chinese devices. Instead, the home screen houses all app icons in a grid and can be accessed straight from the lockscreen.

The shortcuts panel is no longer accessed via the notifications hub but by swiping up from the bottom and has a UI that is nearly a facsimile of its iOS counterpart thereby paying homage to the iPhone from where it draws inspiration. An app search menu can be found via a drop down menu which was fast and definitely aided navigation. 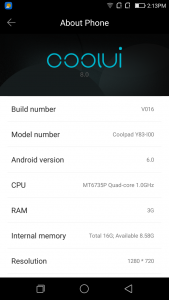 There’s a whole host of additions throughout the UI, some useful, some not so much. We believe that the heavy interface definitely has a hand to play in the UI slowdowns and frame drops.

As we waxed lyrical about the design of the Coolpad Mega 2.5D, the only thought we had was that the company must have cut corners somewhere to be able to deliver this. Unfortunately, we were proven correct. Take a look at the specs of the Coolpad Mega 2.5D and you’ll spot a 1Ghz Mediatek MT6735P processor which isn’t quite the workhorse. The 3GB of RAM  on the other hand greatly assists day-to-day usability. The fact remains though that there are significant frame drops not just in games but even during regular use. Tack on a processor intensive task and you can easily observe the handset heat up drastically. Suffice it to say that the phone definitely isn’t meant for performance freaks. Temper your expectations though and you should be okay with the Coolpad Mega 2.5D for regular day-to-day use. 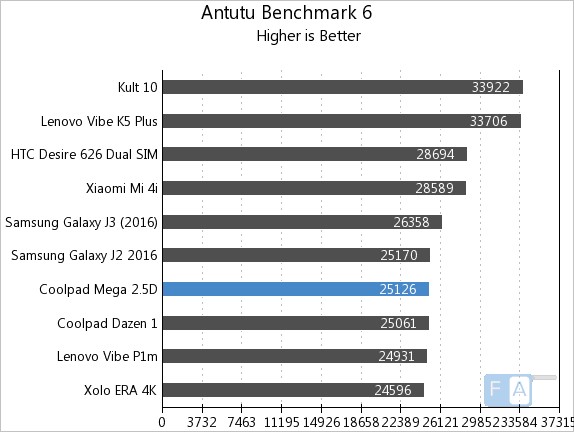 The handset scores 25126 points in the AnTuTu benchmark. 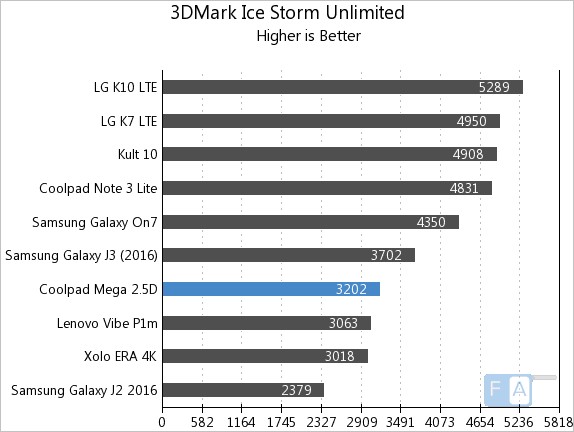 In 3D Mark, the Coolpad Mega 2.5D scores 3202 points placing it in the bottom half of the test bench. 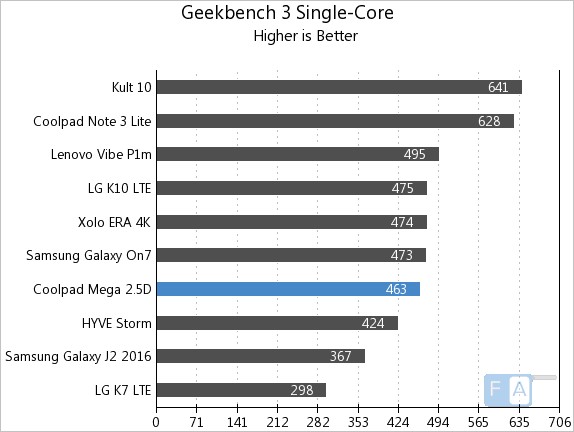 In Geekbench 3 Single-Core, the phone achieved a score of 463 points. 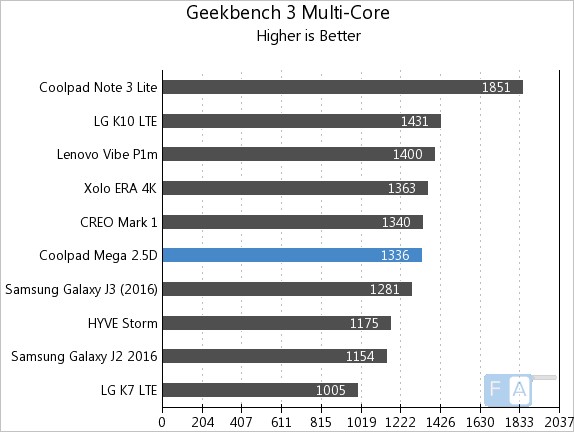 In the Geekbench 3 Multi-Core benchmark, the Coolpad Mega 2.5D does well enough for its category with a score of 1336 points.

It is obvious that with every successive generation, quality would improve. The display is one component which has seen massive improvements over the years yet it isn’t hard to spot a shoddy quality panel in the sub Rs. 10,000 category. Thankfully the Coolpad Mega 2.5D isn’t subject to one. 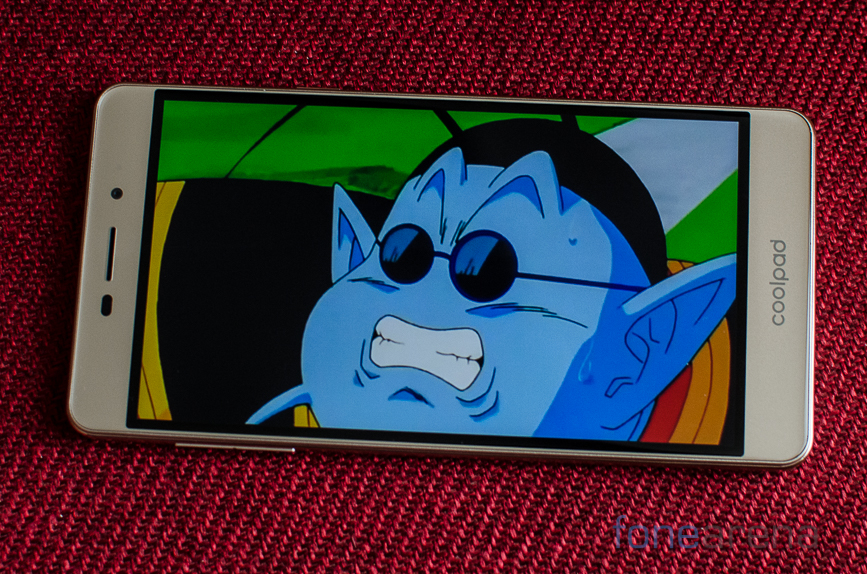 The screen isn’t quite the highest resolution panel around with 1280 x 720 pixels strewn around a 5.5 inch display area. What it loses in resolution, it makes up in quality with excellent contrast levels and viewing angles. Media content looks wonderful here though we’d have liked the brightness levels go just a bit higher. Additionally, due to the lower pixel density, text can appear a bit blurry around the edges but it is not something that you notice too much in day-to-day use. Sunlight visibility is above average and is marred only by the glossy front panel.

With an 8MP autofocus rear camera with LED Flash, Sony sensor and f/2.2 aperture, you’d expect above average results from the camera module. Unfortunately, we were fairly disappointed with shots from the Coolpad Mega 2.5D. 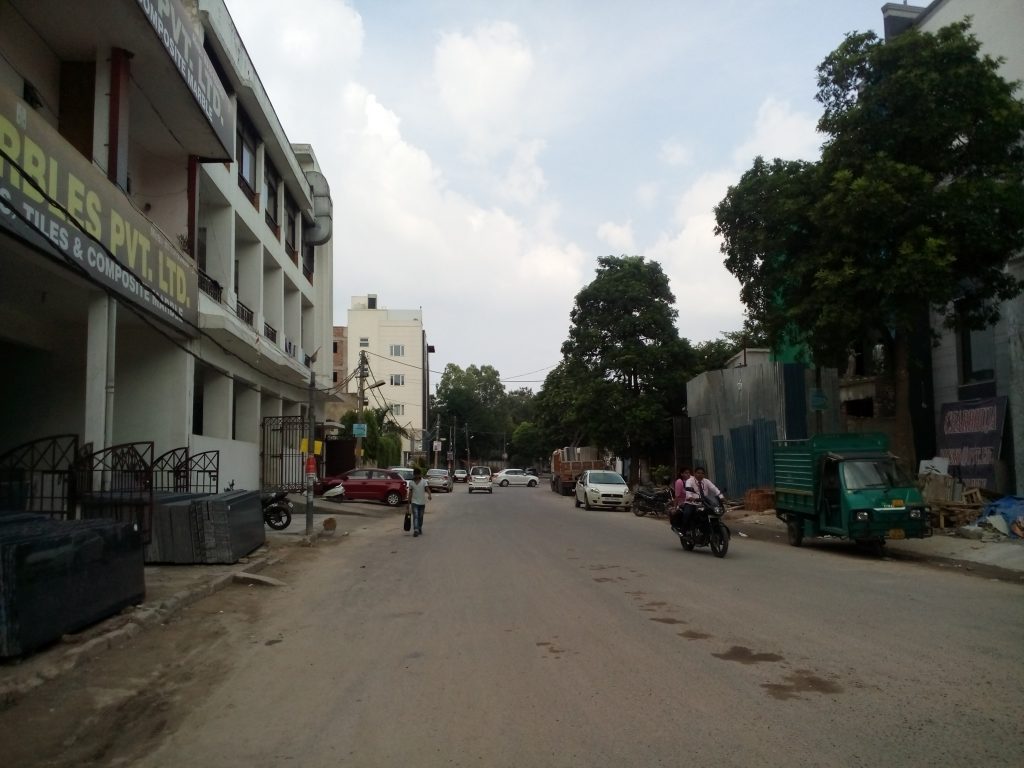 As you’ll note above, the dynamic range is quite poor on the camera due to which the dark regions are very low on details while the highlights have been overblown to a large degree.

This rang through for most our test shots where the image quality proved to be less than stellar. Noise levels on the other hand are fairly well controlled and images were usually passable if not a bit underexposed. All in all, the camera here will do if you’ve got nothing else on hand but the results are quite mediocre to say the least.

Connectivity options are pretty standard on the Coolpad Mega 2.5D and includes 4G VoLTE on the Dual SIM slots. There is WiFi 802.11 b/g/n, Bluetooth 4.0 and GPS support as well of course. Unfortunately the trend of hybrid SIM card slots has caught on here as well. The handset mandates that you chose between two nano SIM card slots or a single SIM and a microSD card slot. Suffice it to say, we’re not very fond of the set up. Built in storage on the handset is 16GB of which approximately 10GB is available at first boot.

With a 2,500mAh battery powering the show here, we were a bit skeptical about what to expect from battery life on the handset. While the phone didn’t live up to Coolpad’s claims of almost two days of battery life, we could easily get a full day of use out of the handset. With two SIM cards, a whole lot of music listening, phone calls and a dozen or so photographs, the phone still managed to get us by till the evening where we ended up topping it off. Not as good as the likes of the Redmi 3s but the battery life isn’t bad at all.

The Coolpad Mega 2.5D is a departure from the handsets we’ve seen from the manufacturer over the past few quarters. The utilitarian designs have seen a transition to a visually appealing identity that stands out from the competition. 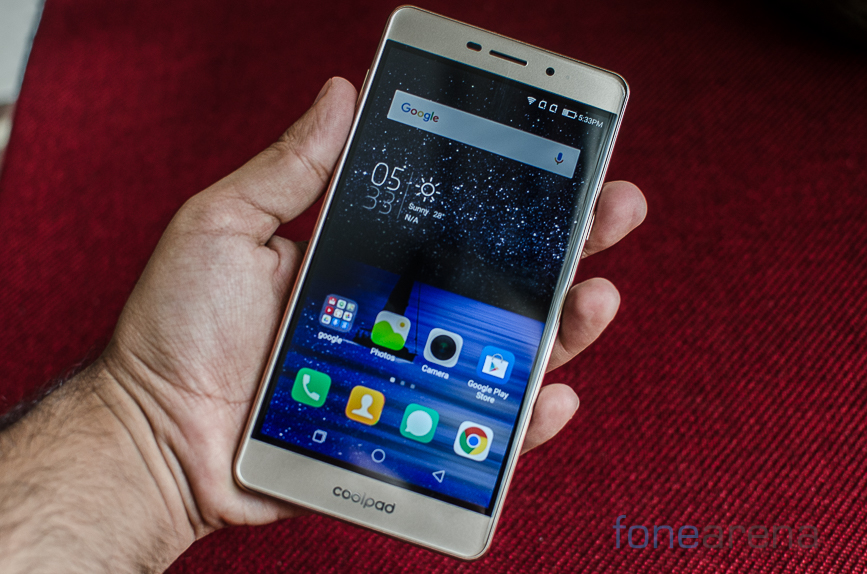 Coolpad is also playing with feature sets to make them appealing to specific audiences, the selfie loving millennials being that in the case of the Mega 2.5D. Yes, performance does seem to have taken a back seat for the brand but not to a degree that would impede even casual use. At a price point of Rs. 6,999, the Coolpad Mega 2.5D is certainly worth taking a look at the next time you’re in the market for a new handset.