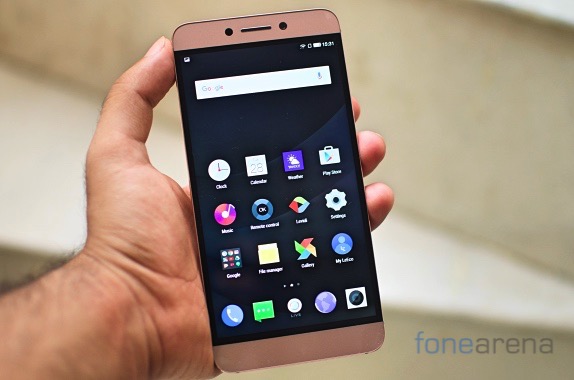 Rising up fast and strong, LeEco erstwhile known as LeTV is quickly becoming a brand to reckon with. Well known in their home market of China for being a huge player in the content industry, the company has been pretty successful with their phones so far. With the 2nd generation of devices, we’re seeing LeEco trying to emulate its content first model in India as well. Moreover the company is pushing the envelope forward with some very interesting design choices. Want to read more about the Le 2? Carry on for the full review.

Like the Le 1 and its myriad variants, the Le 2 is quite generic to look at. That’s not to say that it is an ugly phone but the Le 2 could pass off for almost any other phone in the market. 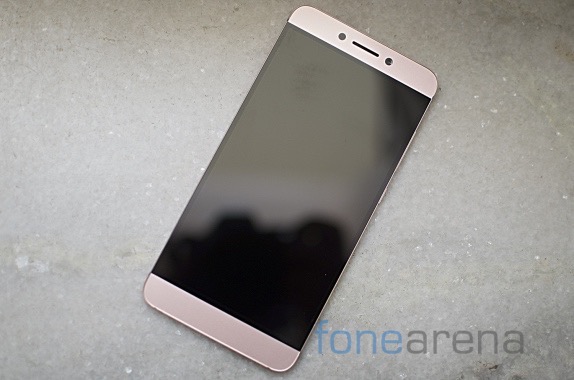 Over on the front is a 5.5 inch screen with small bezels on either side. Above is a front facing camera as well as a proximity sensor. Below the screen, you’ll notice that there are no capacitive buttons. Instead, the phone  opts for on-screen controls. The Le 2’s software stack is very heavily customized and makes important use of these onscreen controls. 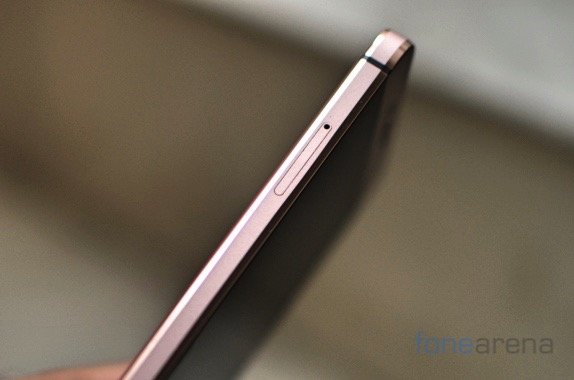 The right side of the phone has the volume rocker as usual. The tactile feedback isn’t quite amazing but does the trick. We felt that the buttons were a bit mushy which might not cope up all that well after a couple of months of use. The left side is where the Dual Nano SIM card slots lie. The phone lacks a micro SD card slot so you’ll have to make do with the built in 32GB of storage. The phone also lacks a 3.5mm audio jack, something we’ll talk about shortly, so the USB Type C connector placed at the bottom becomes even more important. 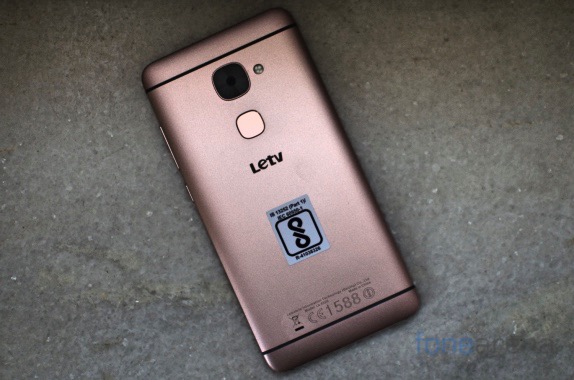 Flip the phone over and you see a familiar design. Antenna lines cut across the top and bottom half of the phone with a camera module up at the top and an LED flash placed next to it. The module protrudes out from the body so is definitely vulnerable to scratches. A glossy fingerprint module sits under the camera that could almost pass off as mirror for shooting selfies. The LeEco brand logo is displayed at the bottom giving it a minor design flourish. 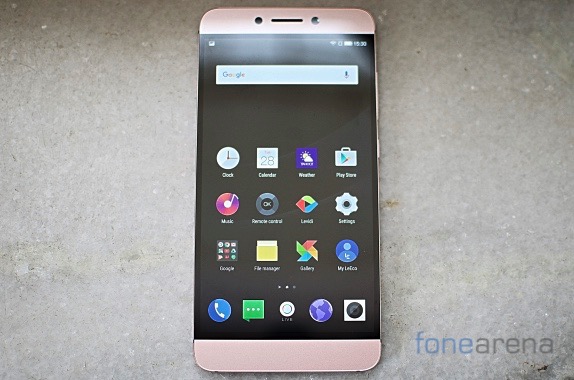 Overall the LeEco Le 2 isn’t a device that will turn heads but its not a bad looking device by any means either. The phone measures a slim 7.5mm and weighs 153 grams making the device very pocketable indeed. The curved edges of the phone further helps in this regard and makes it comfortable to hold in the hand and it simply slips into any pocket.

Running what the company calls as EUI, The LeEco or LeTV Le 2 is a very heavily customized device. It is a complete departure from stock Android and there is a fair bit of learning curve here for non-savvy users. For a large part, the interface has been designed to promote LeEco’s services which isn’t all that surprising given their software and content provider legacy.

While the lockscreen is pretty generic, the homescreen is where the differences lie. Yes, the phone follows the iOS style single level hierarchy. All the apps lie on the homescreen itself and are divided into pages. 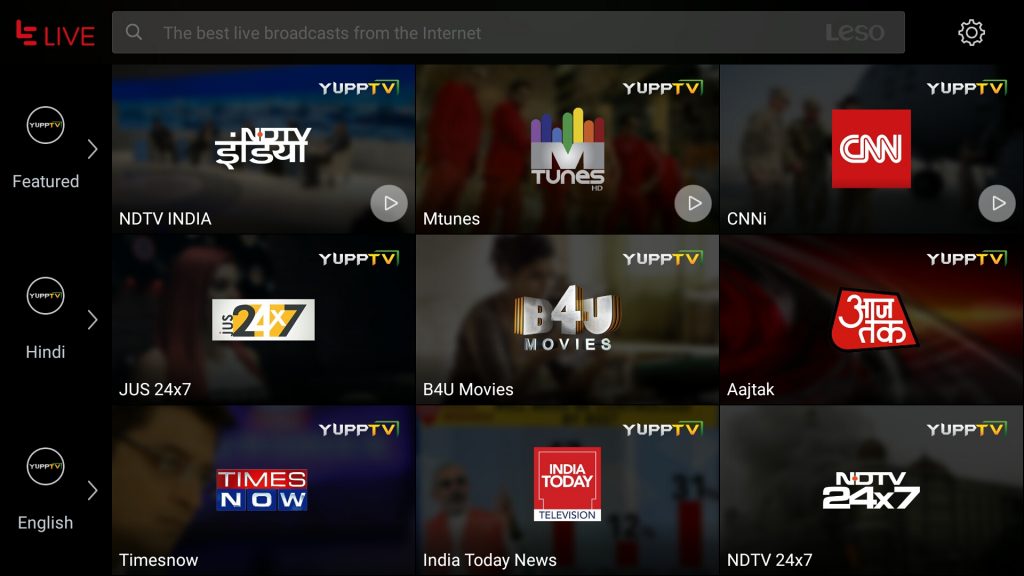 A button proclaiming LIVE sits in the center of the shortcuts tray at the bottom. The button lets you jump into LeEco’s live TV viewing offering. Partnering with Yupp TV, LeEco is offering a vast variety of regional channels for streaming over the internet. This software package comes free for the first year so avid content consumers will be quite happy.

Another modification is the Blinkfeed like display that sits as the leftmost panel on the homescreen. This is where you get recommended content pieces that are being promoted by the company. You can filter these to specific interest areas.

There are other apps that have been bundled in LeEco that add all sorts of basic functionality including an app to control the build in iR blaster. The bloated interface does take a toll on free RAM as just about 1.3GB of the 3GB RAM onboard is available to users. We tested out the phone on EUI version 5.6.012S with the May 1st Android security patch. This is based on Android 6.0.1.

The Le 2 is powered by a 1.8Ghz Snapdragon 652 processor which offers an excellent balance between performance and frugality. A slightly better variant of the much lauded Snapdragon 650, the performance punches above its weight. There’s 3GB of RAM onboard and while we’re starting to see phones packing 4GB of RAM even in this category, the amount of RAM certainly isn’t detrimental to the multitasking performance. The heavily customized skin does take bite out of the onboard RAM but for the most part you’ll never face a problem even when doing heavy multitasking on the Le 2. We’ve added some synthetic benchmarks below to get a better idea of comparative performance against its contemporaries. 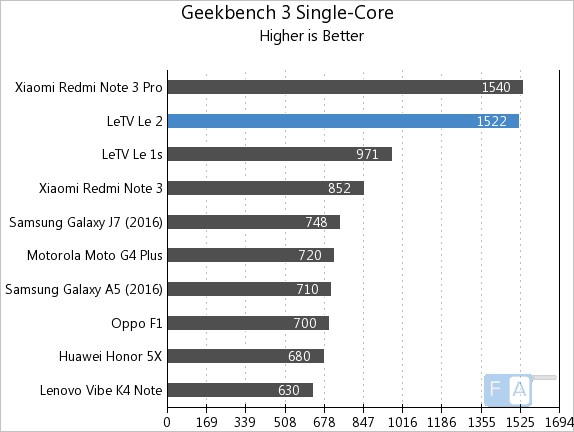 In the Geekbench 3 Single Core benchmark, the phone scores 1522 points. 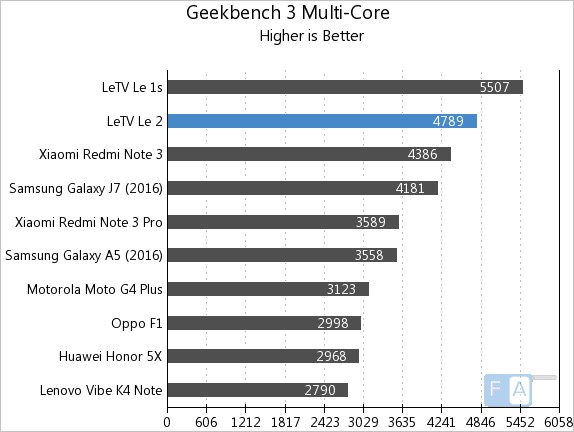 In the multicore version of the Geekbench benchmark, the phone manages 4789 points placing it in the upper end of the segment. 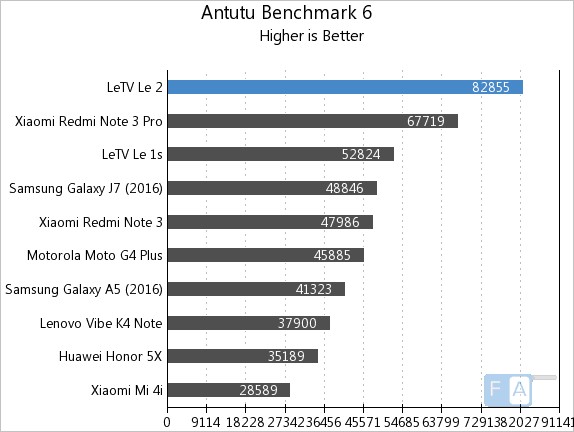 The AnTuTu benchmark score of 82855 places the phone right at the top of the segment. 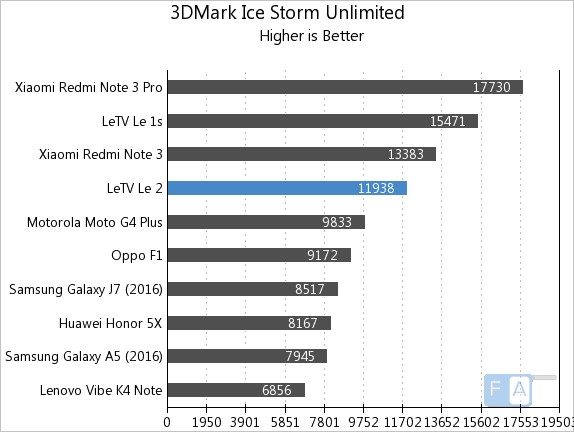 In the 3DMark Ice Storm Unlimited benchmark, the phone manages 11938 points. Overall synthetic benchmarks only give an idea of performance and this may not correlate to real world usage. From a usability perspective though, the LeTV Le 2 performs admirably well leaving nothing to complain about.

The display on the LeEco Le 2 is a 5.5 inch 1080p panel. Commoditization of hardware has worked wonders for the smartphone industry and this is certainly true in the display department as well. The screen shows good contrast levels and the viewing angles fall just short of AMOLED level. Further, it is possible to tweak the saturation and warmth of the display so there is some leeway here towards making the screen perfect for you. 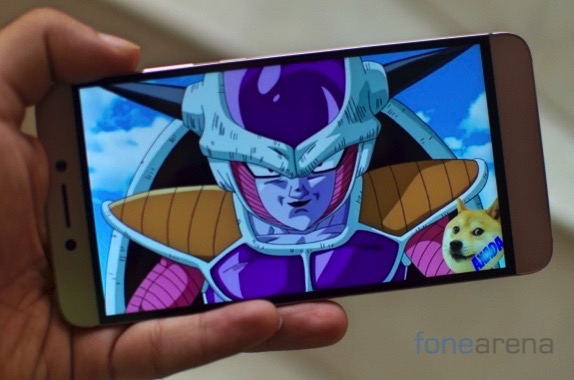 The backlighting goes up to 500nits which is sufficient to enable outdoor visibility but the reflective nature of the screen counteracts this. All in all, the screen is visible outdoors but we wish that the brightness levels could go a notch higher.

The Le 2 has a 16MP rear camera with a f/2.0 aperture. The phone is also equipped with Phase Detection Auto Focus (PDAF) for faster focus locks. In practice, this works well enough and unless the lighting conditions were particularly inclement, the phone managed to lock onto the subject very quickly. 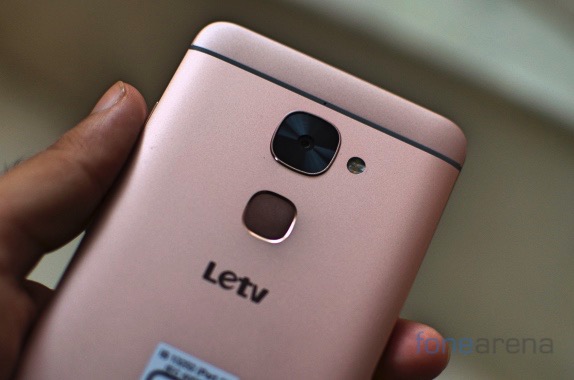 That’s only one part of the story though.  The camera has the potential to take some great shots but proves to be quiet inconsistent. Striking the right white balance in particular is something that the phone often struggles with. More often than not, the photos end up with a much cooler color profile than what it actually is. Noise levels are fairly in control but here too, the phone struggles once the light levels dip down low. Another issue we faced occasionally was that while the phone would appear to have captured the image, it really hadn’t. This resulted in a slight blur on a couple of shots when reviewing later. We can’t really call the camera on the Le 2 bad but you’ll have to be fairly patient and might need a couple of tries before getting the perfect shot out of it. 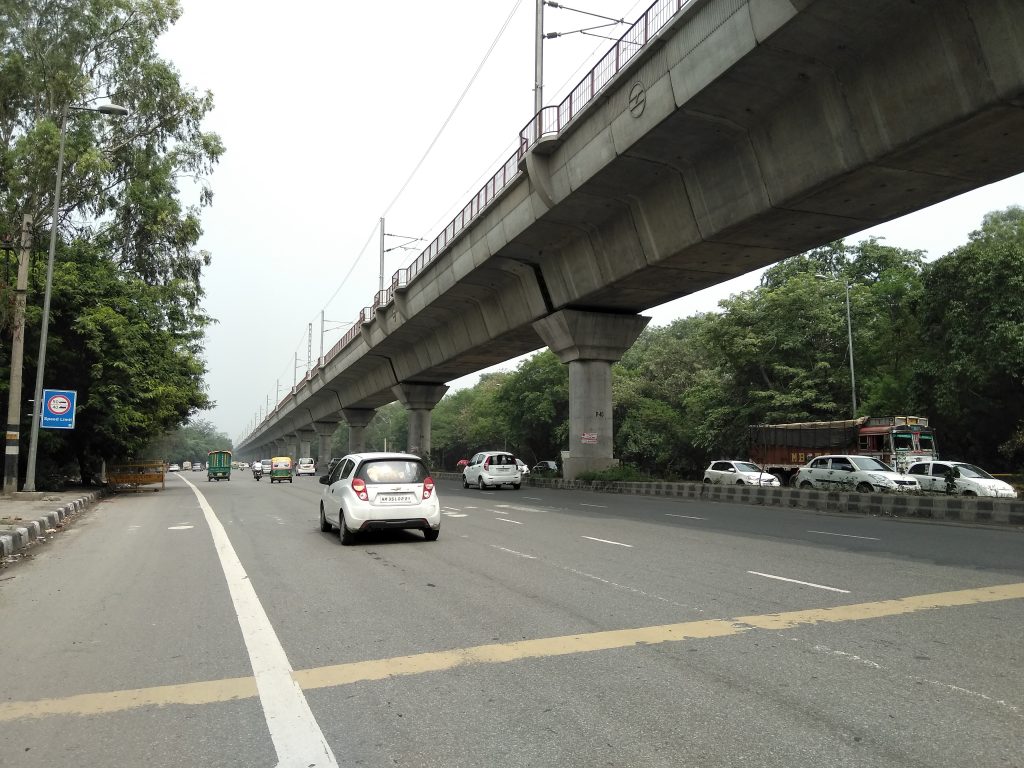 Much has been said about the missing the 3.5mm audio jack on the Le 2. Yes, this is a very forward looking move but then again it is a move towards a future that nobody asked for. The audio jack is a standard for a reason, it works universally across any kind of headphone or earphone irrespective of brand or price band. Keeping that in mind, the lack of the adapter becomes an annoyance more than just a curious omission. 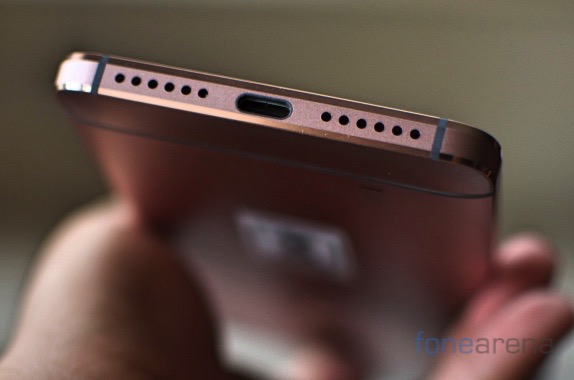 With audio over USB Type C, the aim is to take the DAC out of the phone. The DAC ie the Digital to Analog Converter is the part of the phone that converts your audio from the bits and bytes stored on the device to analog audio that plays back on your earphones or headphones. There’s not much that you can do here as the audio tuning is usually a part of the phone’s firmware but you can usually tweak it marginally using an equalizer. Moving the DAC from the phone to the headphone means that your headphone manufacturer can create a sound profile that is perfect for your headphone and will work universally across phones. Since the earphones or headphones now interface over the USB standard, they talk to the phone digitally. This also means that there is no loss of signal, something that does happen over a 3.5mm jack. The bigger question though is that does this make a difference at all?

Technically, it is quite similar to using an external DAC which can potentially improve audio multi-fold. With the DAC build into headphones, you lose a bit of control but technically should get better audio quality but you’ve also got to factor in the intrinsic quality of the earphone itself. A highend headphone is simply better than a lower end headphone and USB audio with a budget headphone isn’t going to solve that problem. There’s also the fact that LeEco’s Type C earphones are pretty much the only ones readily available at the moment so that is an additional 2000 rupee expenditure tacked on. The phone does come with a Type C to 3.5mm audio adaptor in the box. Using the Le 2 as source, the CDLA earphones sold by LeEco sound pretty good, perhaps even better than entry level earbuds bundled with phones. Compare them with quality headphones or earphones from the same price category though and the difference isn’t all that stark.

The battery is rated for 3000 mAh and supports fast charging which is good to have because the phone isn’t the most frugal with battery life. The Le2 lasts about a work day if you are careful with it but extensive usage rapidly drains the battery and you’ll be searching for a charger by evening. The likes of the Redmi Note 3 perform much better on that front by delivering full day autonomy. 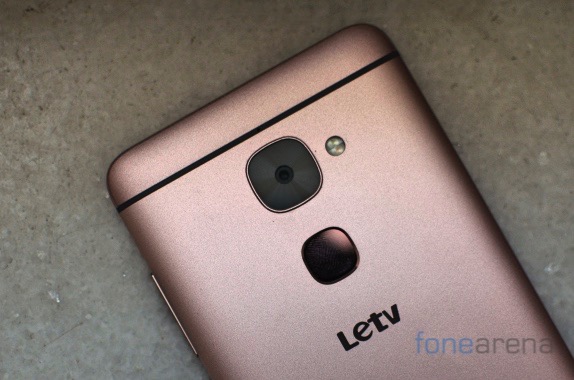 The LeEco Le2 is an interesting device that is trying to take the first mover advantage by being the first to adopt audio over USB Type C exclusively. As a full package too, the phone has all the makings of a good competitor to devices like the Redmi Note 3 or the Yu Yunicorn. The phone is priced at Rs. 11,999 and is definitely worth a consideration if you are looking an experience that is slightly different from that offered by the now conventional Xiaomi, Coolpad or Micromax devices.