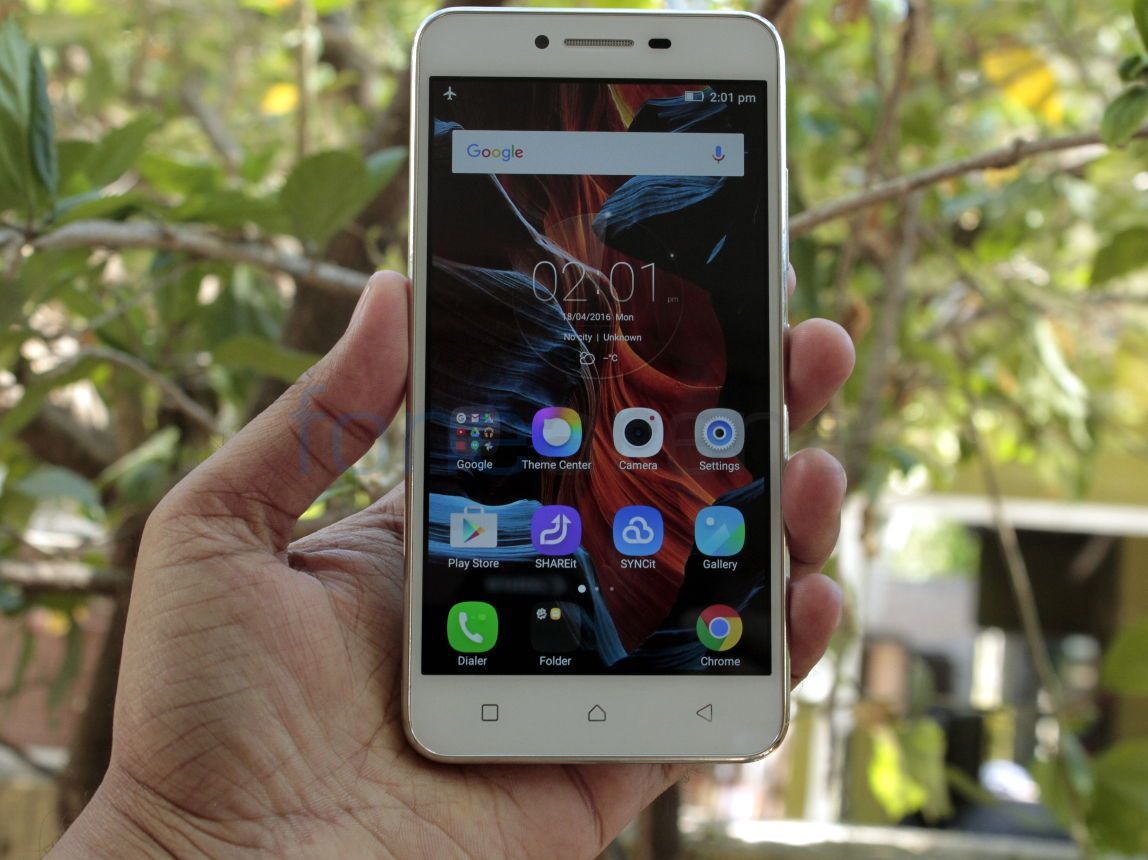 Lenovo launched the Vibe K5 Plus in India last month. It is a mid-range smartphone with a 1080p display and comes with a different design compared to earlier Lenovo smartphones. The specifications of the smartphone look good on paper. Is it worth the price? Let us find out in the complete review.

We unboxed the Lenovo Vibe K5 Plus recently, check out the unboxing video below. 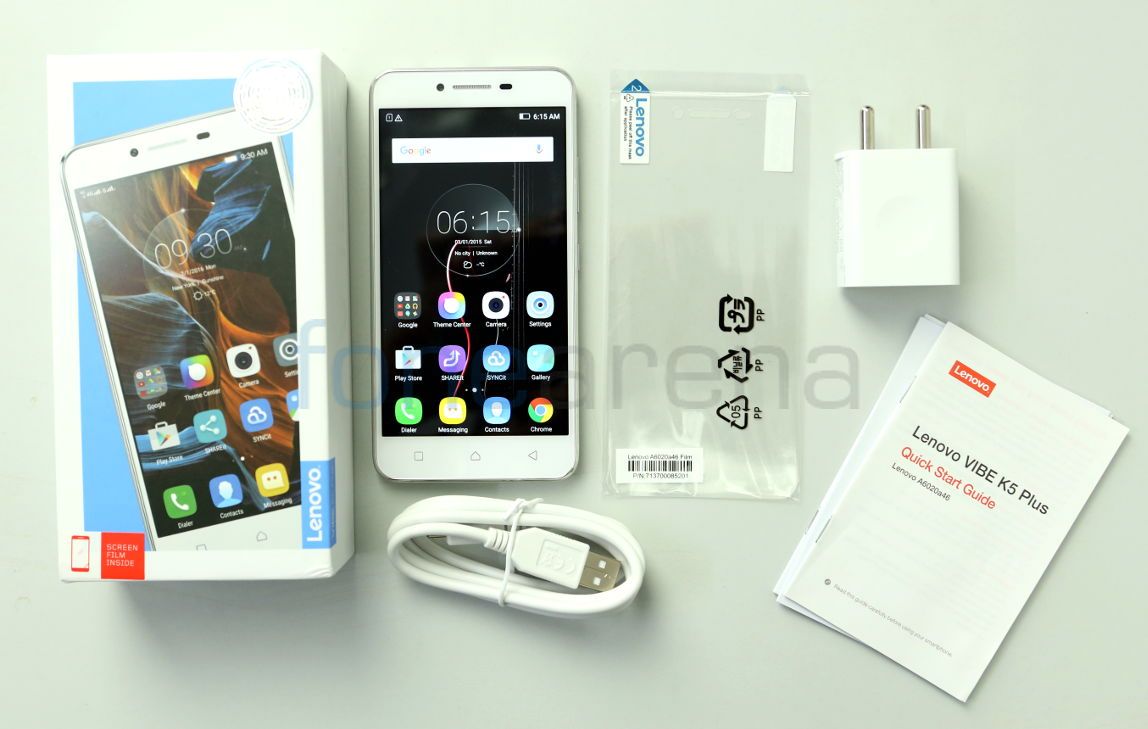 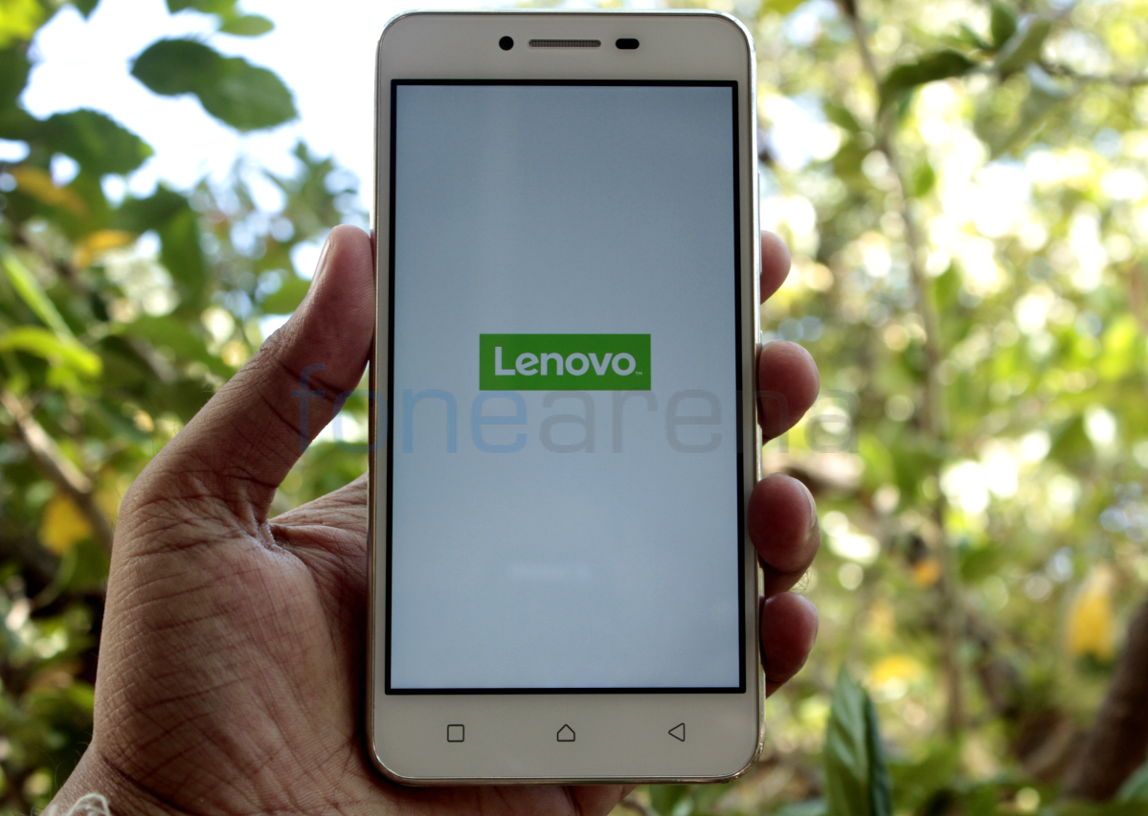 The Vibe K5 Plus has a 5-inch display with a resolution of 1920 by 1080 pixels and a pixel density of about 440 PPI. Since it has 450 nits of brightness, it is bright. It offers vibrant color output, sunlight legibility and the viewing angles are good as well. The display is glossy and is prone to fingerprints. Lenovo doesn’t mention if it has a Corning Gorilla Glass protection or any other hardened glass to prevent the display from scratches. It has a screen-to-body ratio of 68.4%, which is good. The phone is 142mm tall and 71mm wide, which is good for a phone with a 5-inch screen. 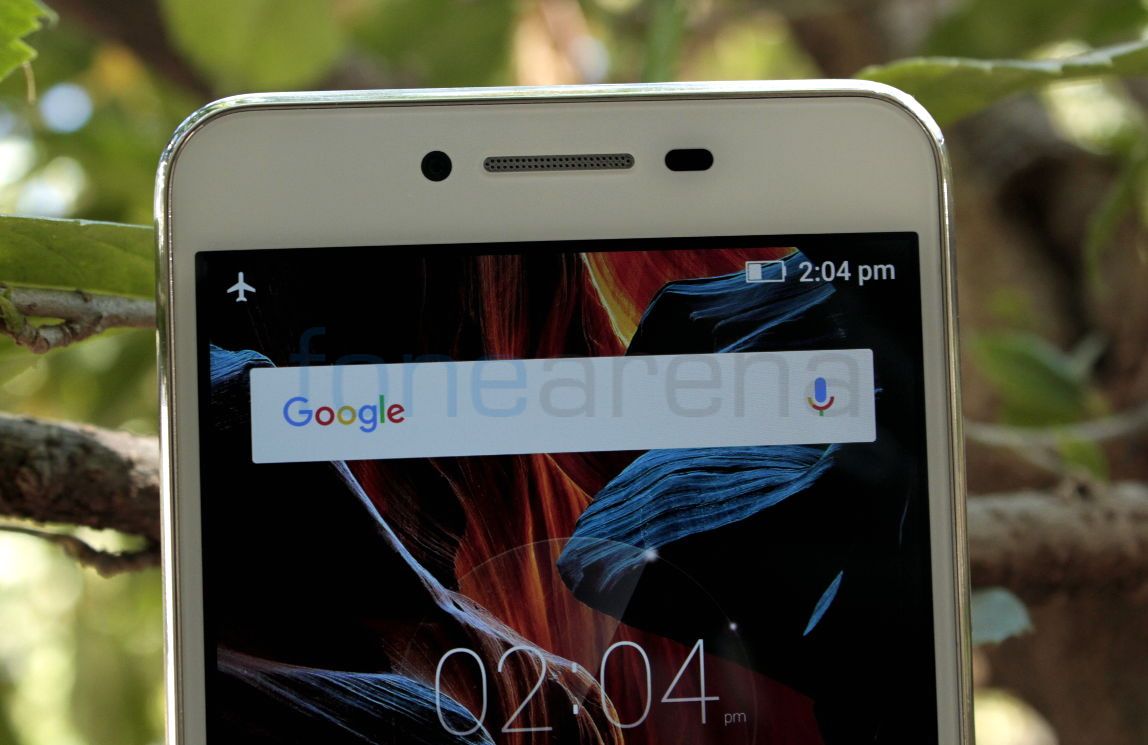 It has a 5-megapixel front-facing camera with OmniVision OV5693 sensor with f/2.8 aperture, 4P lenses. The front camera is good for selfies and video chats. Colors are vibrant and the images are sharp as well. There earpiece is present on the top, next to the camera. The usual set of proximity and ambient light sensors are present in the bezel, above the display. It also has a tiny notification LED on the right corner, which glows in green and red color. It is hardly visible when it’s off. The phone has gyroscope, but lacks magnetometer. The Vibe K4 Note has both these sensors. 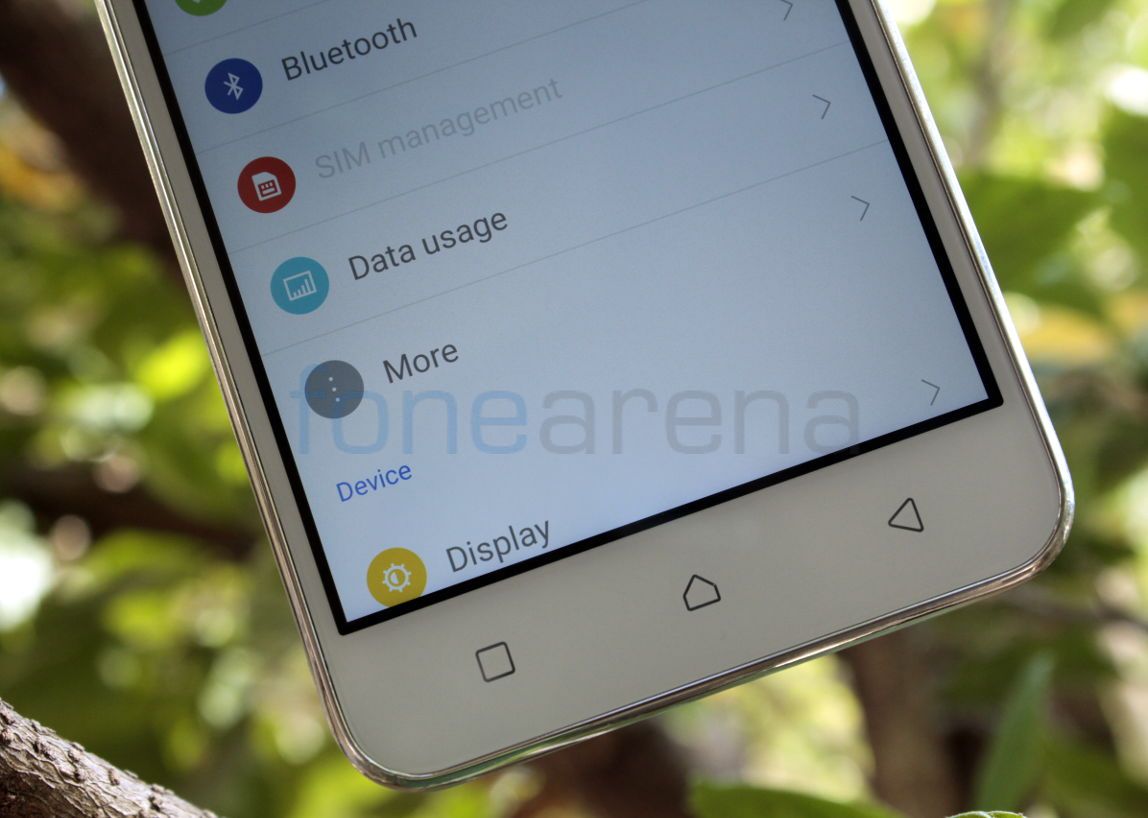 The capacitive touch buttons are present below the display. These are not backlit, but offer haptic feedback when pressed. There is a shiny chrome rim running on the sides of the phone, which is easily prone to scratches. 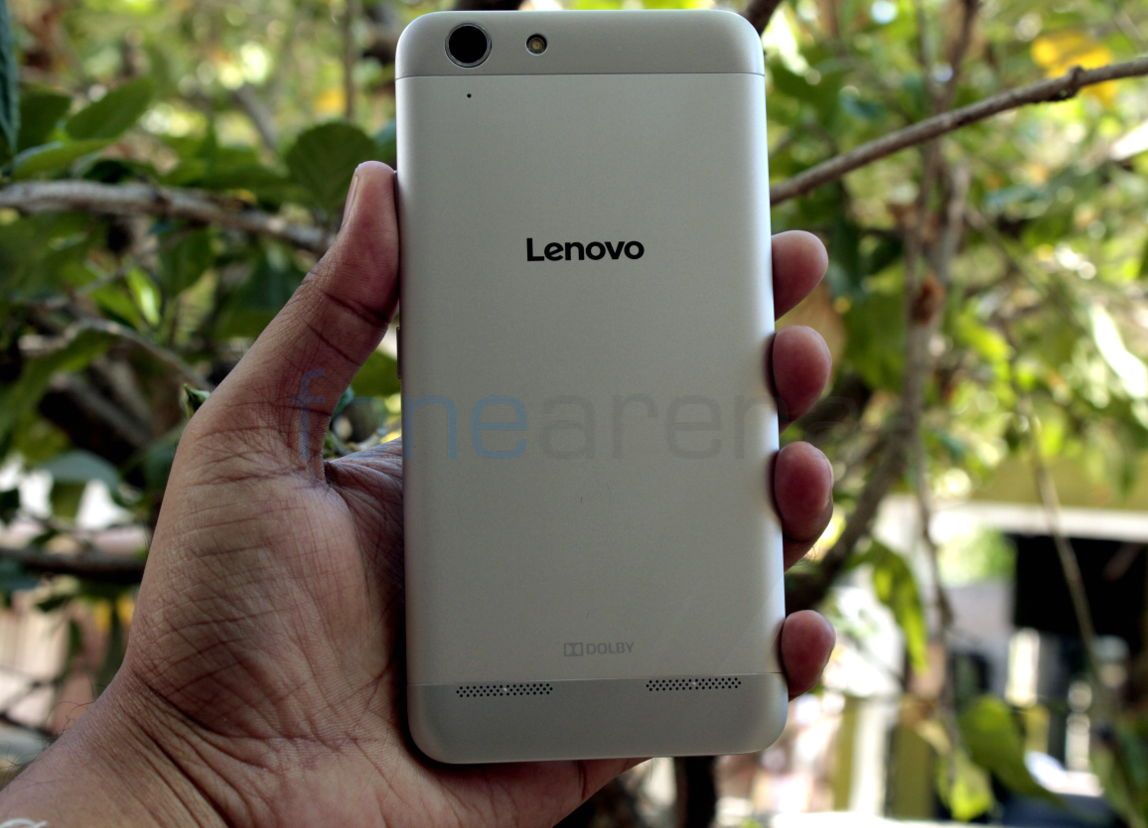 Even though the back cover has smooth metallic finish, it doesn’t slip out of the hands easily, but it is prone to scratches when the phone is placed on a rough surface. We have the Platinum Silver variant of the phone. It also comes in Champagne Gold and Graphite Gray colors. On the back there is a 13-megapixel camera with single LED flash along with a tiny microphone hole below the camera. There are two loudspeaker grills present on the bottom part of the back, along with Dolby branding since it has Dolby Atmos. 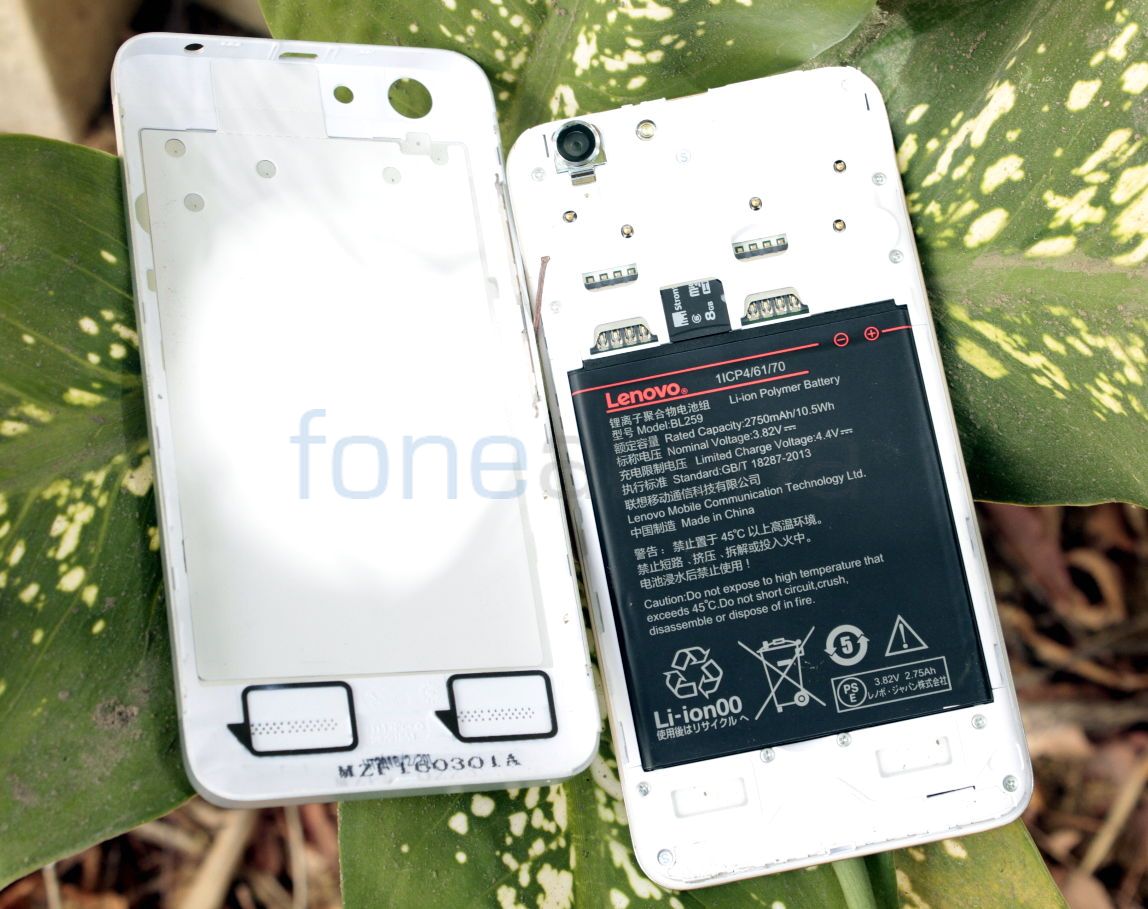 The back cover has a plastic coating on the inside, even though it has metallic finish on the outside. Under the back cover there is a microSD slot, SIM slots and a 2750mAh removable Lithium-Polymer battery. 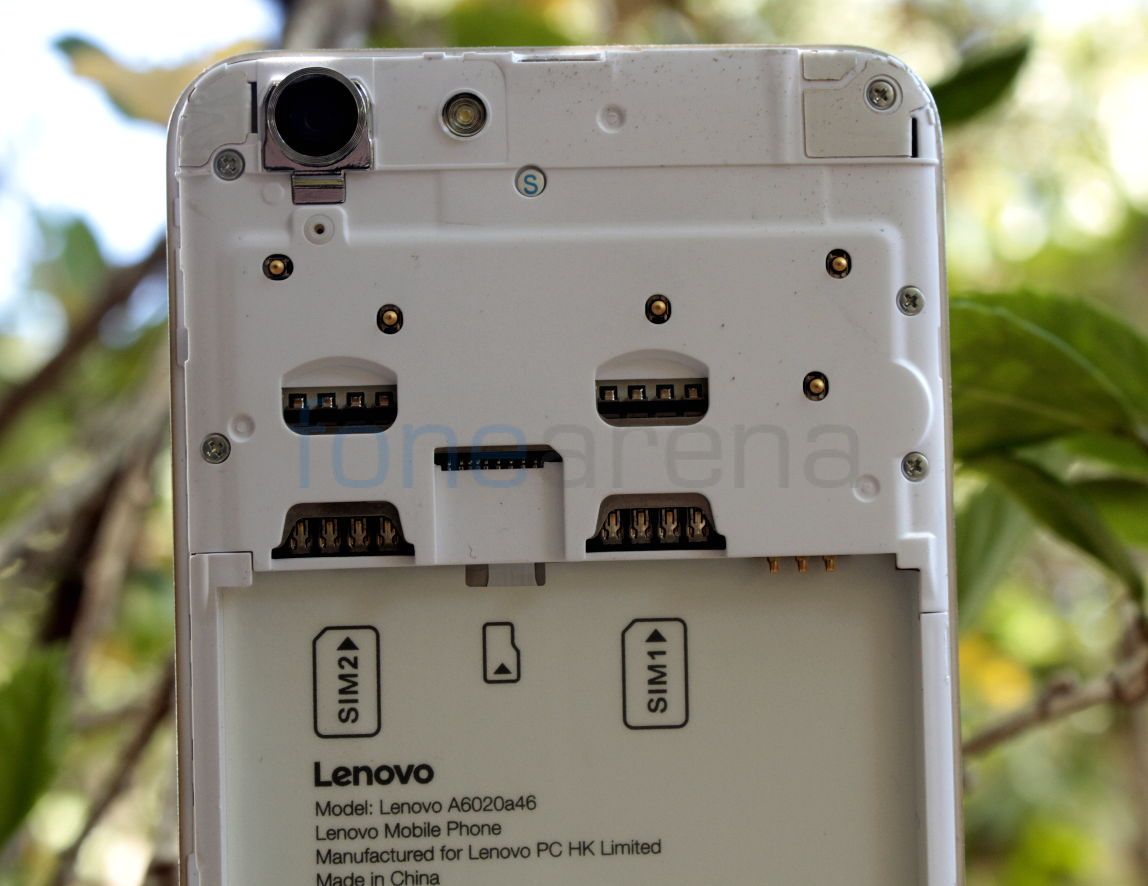 The primary micro SIM slot is present on the right side, the secondary micro SIM slot is present on the left side and the microSD card slot present in between. The battery needs to be removed to insert or remove the micro SIM cards. You can only insert the microSD card without removing the battery, but it can’t be removed. Overall, the smartphone offers a decent build quality, which could have been better since some phones that are priced slightly higher come with full metal unibody designs. 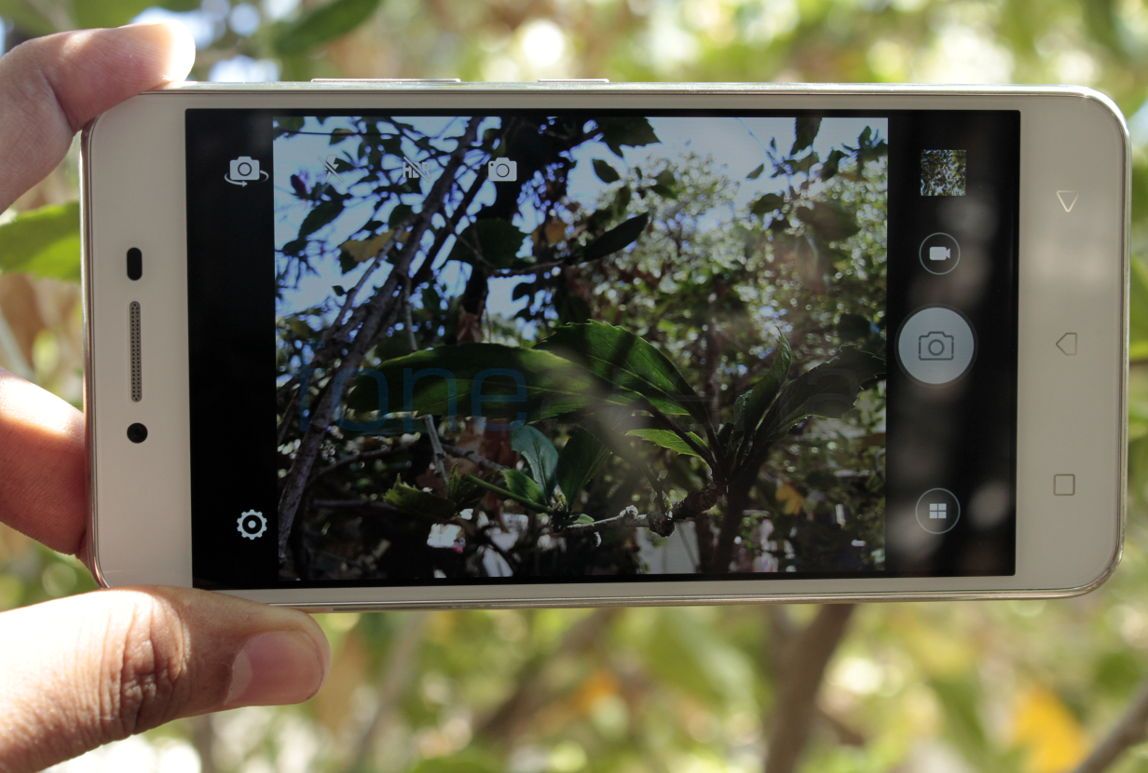 It has a 13-megapixel rear camera with single LED flash, Omnivision OV13850 sensor, f/2.2 aperture, 5P lenses. The camera UI is simple, has toggles for flash, front camera and HDR. The menu option lets you choose Panorama and also has several Effects. Settings option lets you choose aspect ratio (16:9 and 4:3), adjust white balance, ISO (100 to 1600), enable geo location, option to use volume button as a shutter key and more.

Coming to the image quality, daylight shots are good. Macro shots are good, but focus is hard most of the times and it doesn’t focus the whole object and only part of it. HDR shots are too bright so colors are not perfect.  Low-light shots surprisingly doesn’t have much noise. Images with flash are decent, but it might be too bright for close-up shots.

Check out some camera samples below (Click the image to view full resolution sample.) 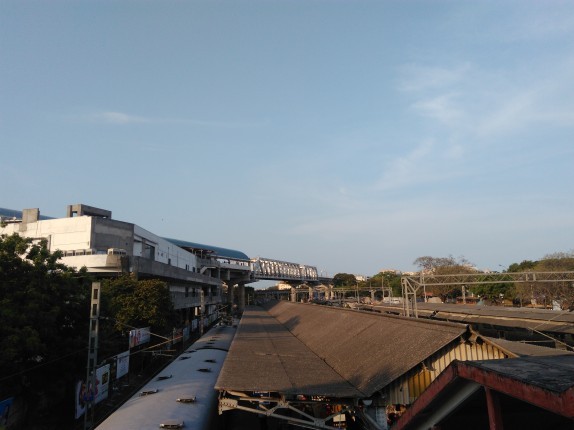 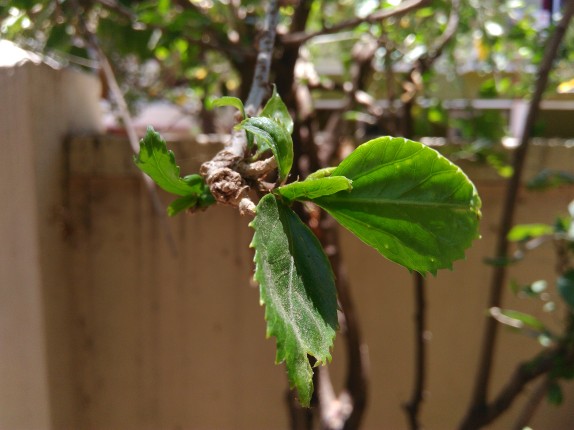 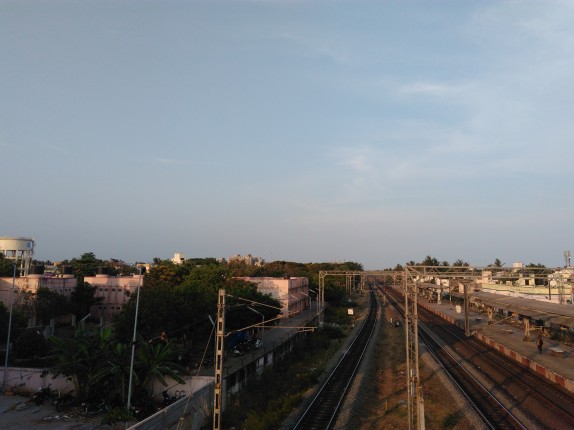 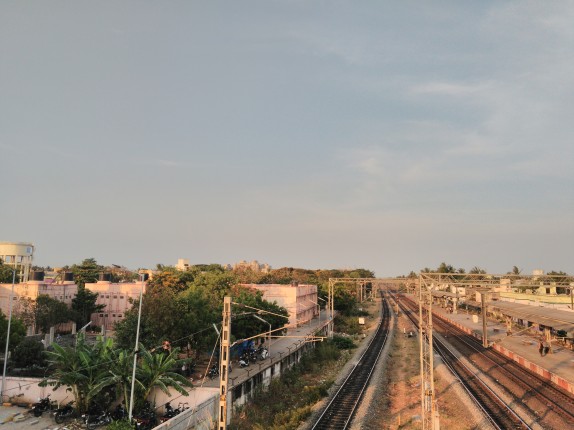 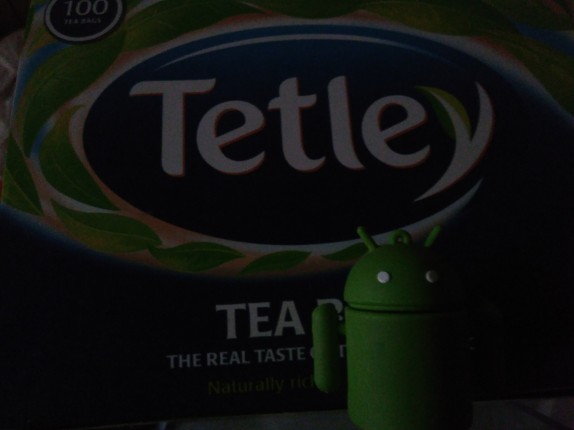 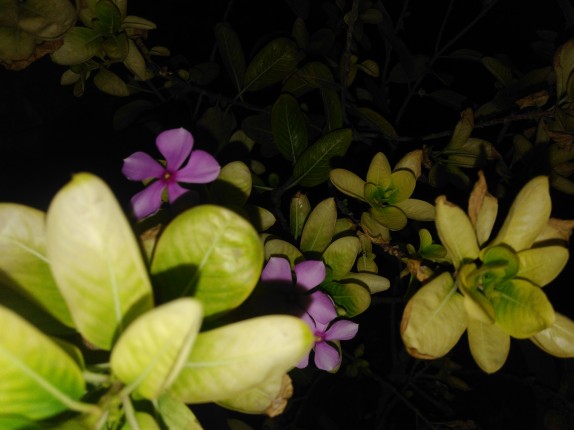 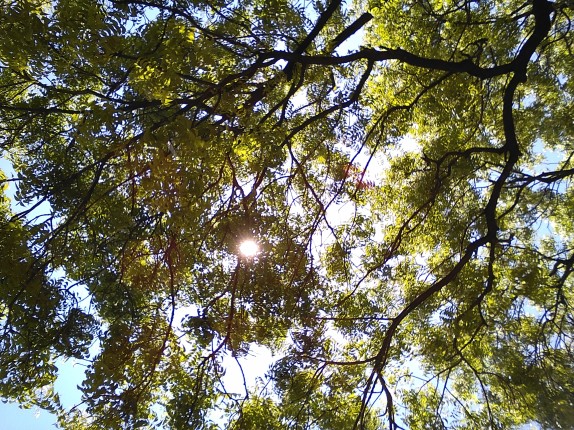 It can record videos at a maximum 1080p resolution at 30 fps. It also has EIS, which is software stabilization that prevents shake to certain extent. The video quality is good. Thanks to the secondary microphone, audio is crisp as well. Check out the video samples below.

Check out the complete set of Lenovo Vibe K5 Plus camera samples here. 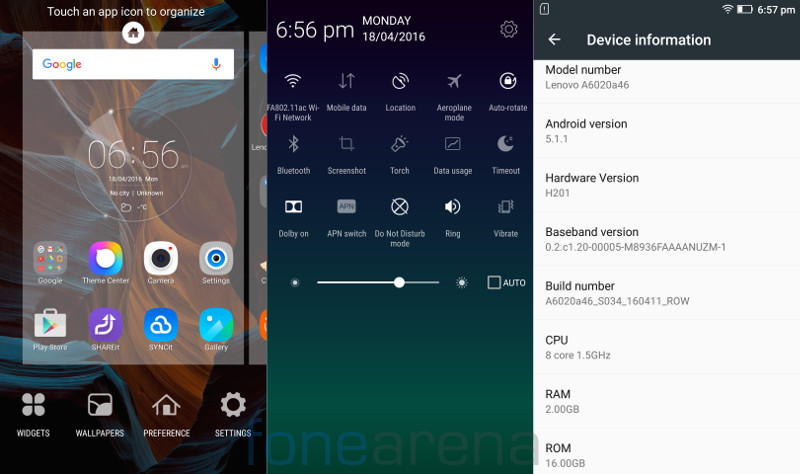 The smartphone runs on Android 5.1 (Lollipop) with Lenovo’s own Vibe UI on top. The UI is slightly different from the one seen in Vibe K4 Note and Vibe X3 since the quick settings toggles are not customizable. The company has not announced when it plans to roll out the Android 6.0 (Marshmallow) update for the smartphone. 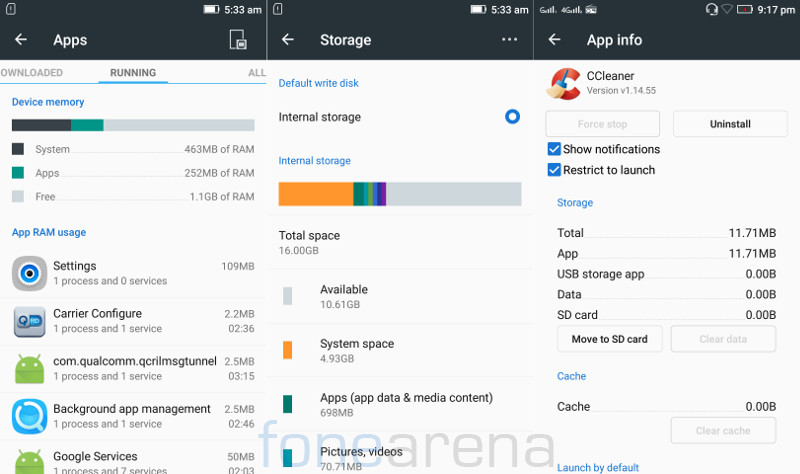 Out of 2GB RAM, 1.89GB of RAM is usable, out of which about 1.1GB of RAM is free when the phone is idle with just system apps running in the background. Out of 16GB of internal storage you get about 10.6GB of usable storage since OS and apps take up about 5.5GB of space. You can also set the microSD card as a default write disk and also move apps to the SD card. 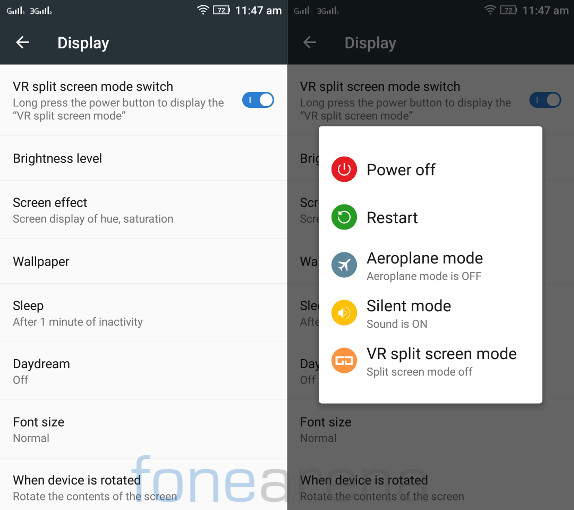 It has built-in split-screen mode that lets you view the whole UI using the VR glasses, similar to the K4 Note or Vibe X3, so you don’t need a separate VR app. After enabling this option from the ‘Display’ settings, you can press and hold the power button to turn on this mode. Lenovo has added this TheaterMax split screen feature even for the old K3 Note smartphone along with Android Marshmallow update. 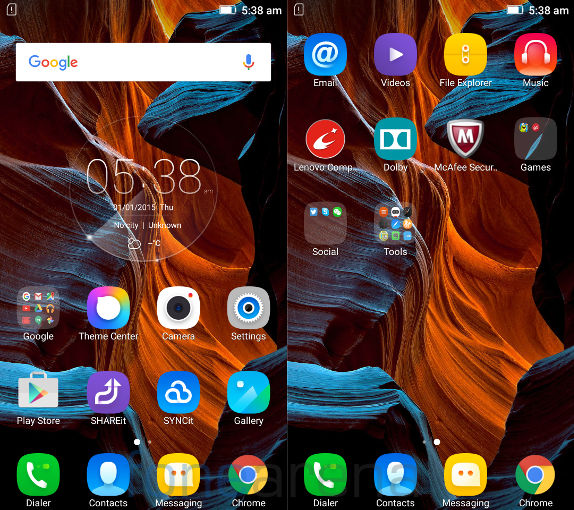 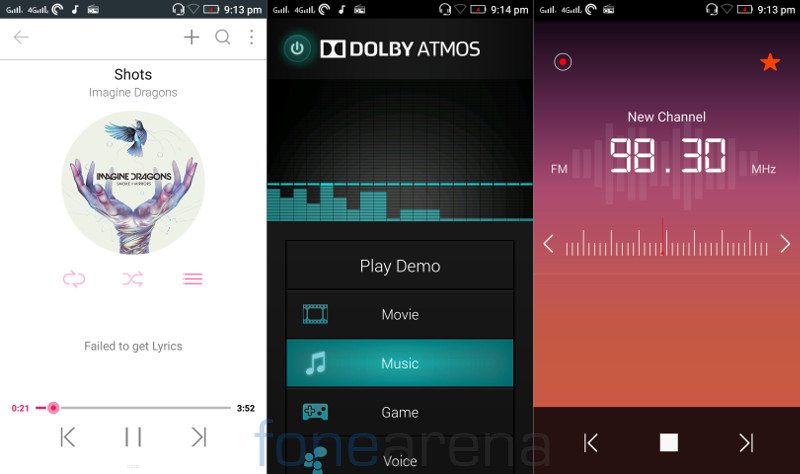 It has a separate music player that can play a range of audio formats and it has FM Radio with recording. Thanks to Dolby Atmos, PM8916 audio codec and dual speakers, loudspeaker output is good. Since the loudspeaker is present on the back audio gets muffled when the phone is placed on a flat surface. Wish it had front-facing or bottom-facing speakers. Audio output through headphones is good as well. It can also play videos at 1080p resolution smoothly. 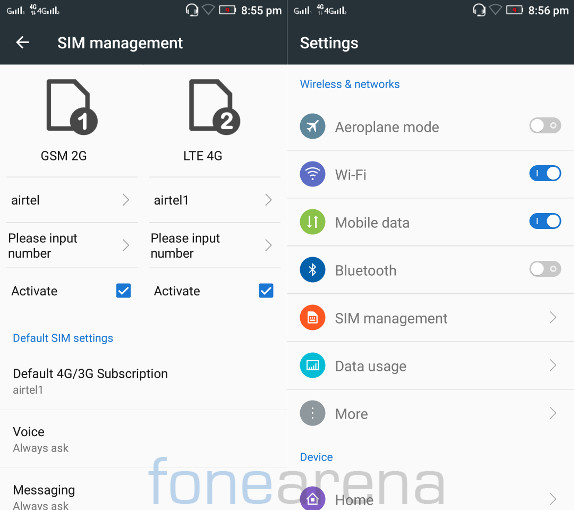 It has 4G support with support of 4G LTE bands (TDD B40 2300MHz and FDD B3 1800MHz) for India. Both the SIMs support 4G, but you can enable 4G only in one SIM at a time, while the other goes to 2G. You can set the default SIM for voice call, messaging or data connection. It has Wi-Fi 802.11 a/b/g/n, Bluetooth 4.0, GPS and has USB OTG support as well. We did not face any call drops or any other issues. 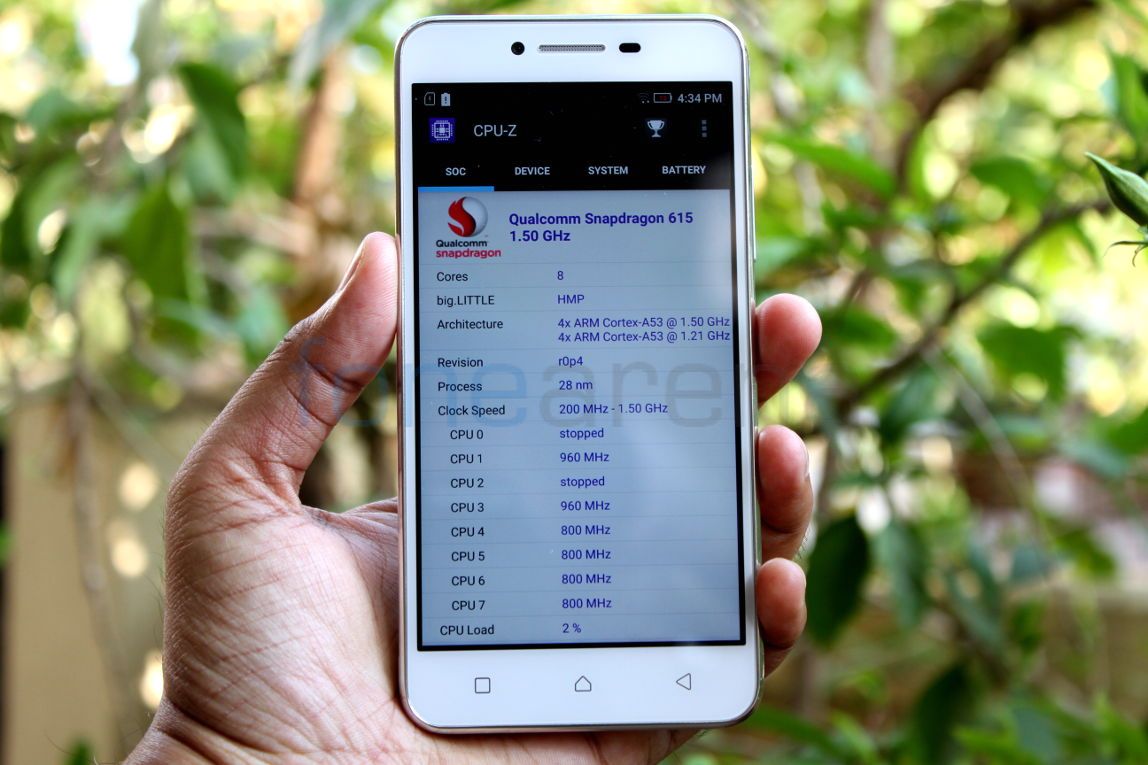 It is powered by an Octa-Core Qualcomm Snapdragon 616 64-bit processor (Even though CPU-Z shows it has Snapdragon 615) that has four ARM Cortex A53 cores clocked at 1.50 GHz per core and other four Cortex A53 cores are clocked at 1.21 GHz per core. Performance is good without any lags in the UI even though the UI consumes more RAM. 2GB of RAM is enough for running several apps in the background without any issues.

Several K5 Plus users have complained about heating issues in the phone few weeks back. Lenovo has pushed several updates to the phone to fix the heating issue. The phone obviously gets warm when using 3G/4G or during gaming, but it doesn’t get too hot to handle. Check out some synthetic benchmark scores. 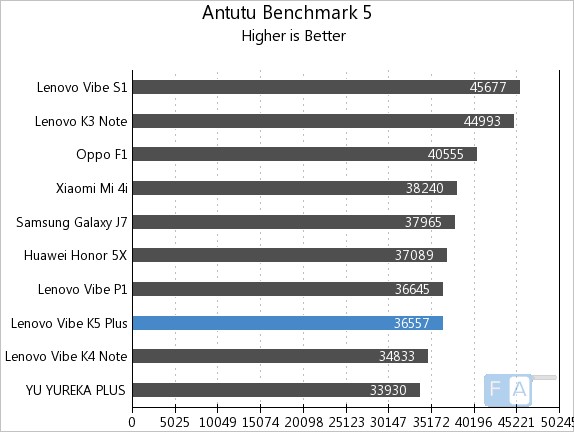 It managed to score 36557 points in the AnTuTu 5 benchmark. 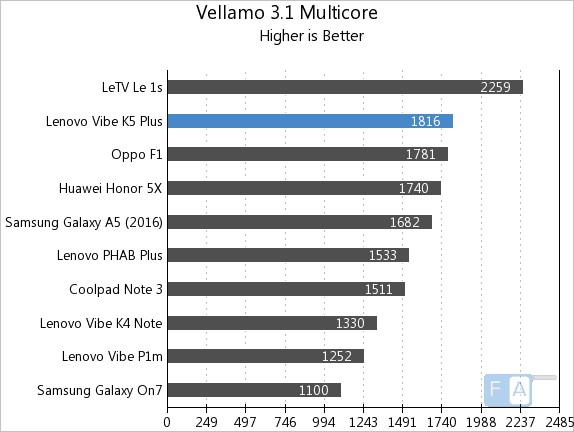 It scored 1816 points and grabs the second spot in the Vellamo 3.1 Multicore benchmark. 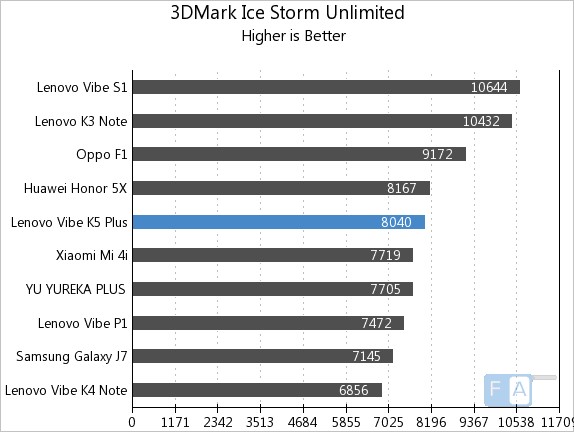 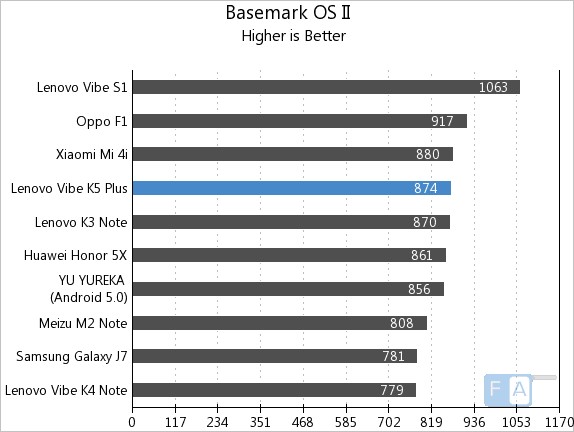 It scored 874 points in the Basemark OS II benchmark. Check out the complete set of Lenovo Vibe K5 Plus benchmark scores here. It has Adreno 405 GPU clocked at 550 MHz. We tested some high-end games on the smartphone. Performance and graphics were good. 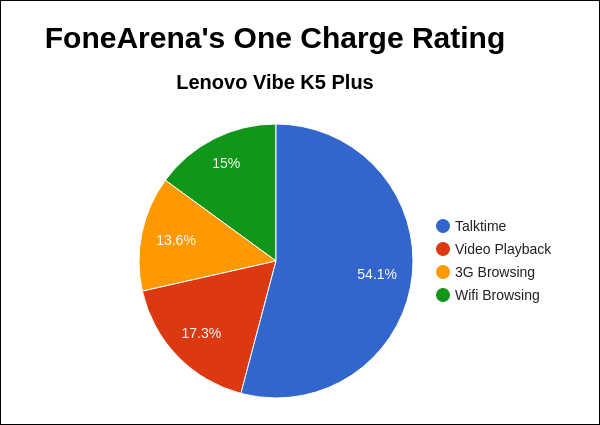 Coming to the battery life, the 2750mAh removable battery doesn’t offer impressive battery life. On full charge it lasts for less than a day on 4G with both the SIM cards on use. It has battery saver mode that reduces the power consumption by reducing the phone’s performance when the battery is low, but it doesn’t have ultimate power saver mode present in Vibe K4 Note and Vibe X3. It achieved a One Charge rating of just 09 hours and 21 minutes, which is not impressive, even though it packs a huge battery for a phone with a 5-inch screen. We will bring you the complete set of battery test results soon.

Overall, the Lenovo Vibe K5 Plus is a good smartphone for the price of Rs. 8,499. It has a good display, good audio output and even a decent camera. It also comes with dedicated dual SIM and microSD card slots. The build quality could have been better, the metal rim on the sides are the back are prone to scratches easily and the battery life could have been better.

The smartphone was available in limited numbers on Flipkart initially, now all the colors are available easily through open sale. To summarize, here are the pros and cons of the smartphone.