As i said in the Post for the Picture Gallery yesterday, I’ve been given the brand-spanking-new Nokia C6 for a few Days. When it was announced, i thought that this might actually sell like Hot Cakes, and after 1 1/2  Days with it, I haven’t changed my Mind. With it’s Features, Form Factors and Price Tags, the C-Series will be aimed and surely sold mainly to young People, who wanna be connected 24/7 and keep in Touch with their Friends, be it via SMS, IM, Social Network or Mail. With a Price Tag of 220 Euro before Taxes and Subsidies it stays in an affordable Range, especially if you get it via Provider.

Before you continue reading, I have been told that the Software of those two Models are not ready yet. Things can slightly change until the Phone comes out to the Markets, but nonetheless I must say that the Bugs were very few and the Operating Speeds pretty good. Anyways, here’s what I’ve found out after using the Nokia C6 for a full day: 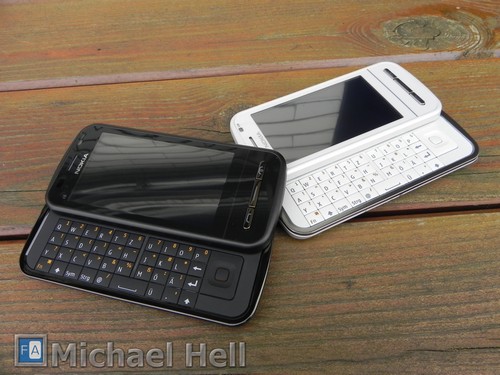 Hardware: The Nokia C6 is a Phone of the young Generation. Means Touchscreen plus a slide-out QWERTY, which is also by far my favourite Form Factor. It sports a resistive 3,2″ Touchscreen with nHD (360×640 Pixels) Resolution. The Quality is up par with a N97mini, maybe even slightly better. Underneath it are a Menu-, Call- and End-Key. What grinds my Gears a bit, is the Waste of Space they had with the Display. There could’ve been an even bigger Screen. Anyways, slide the Keyboard up with a noticable SNAP and it reveals the best Keyboard Nokia has recently made. 4 Rows, with a D-Pad next to it – just awesome! I’ve been ranting all over the 3-Row Keyboards on N97/N900 and Nokia seems to put an End to this finally. The Keys are up par with N900 quality-wise, the D-Pad does a very good Job as well. I’d love to see a better Spacing and use the whole Width of the Device, but that’s maybe just my personal Taste. However, the Keyboard works fantastic, the Keys have a great, tactile Feel and the 4th Row is the Bit that Nokia needed to have some decent Hardware QWERTYs. 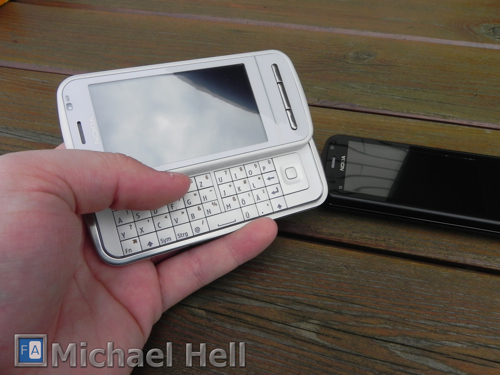 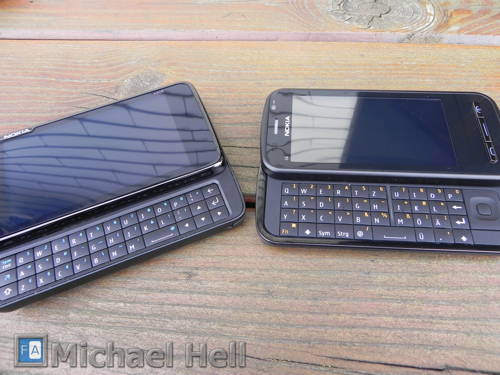 The Sides of the C6 are typical Nokia, with Micro-SD Slot on the left Side and Camera Key, Screenlock-Slider and Volume Keys at the right Side. Located on Top is the 3,5mm Audio Jack and Micro-USB Connector, while the Bottom is Home of the Charger Connector. Nothing spectacular here really, all solid Work, except of the Screenlock Slider that is slightly wobbling. This is hopefully fixed on the final Retail Units. Turning the Device around, reveals a 5 Megapixel Camera with Autofocus and (single) LED Flash. The Picture Quality is alright, Pictures won’t be posted due to above said, unfinished Software. Unfortunately, only a Single Speaker made it on the C6 and it’s located on the Backside, which means that the Loudness is affected if you have the Device laying on the Speaker. Under the Backcover is a 1200 mAh BL-4J Battery. I’m not sure how the Battery Life turns out to be with finished Software, but i expect Improvements in the Software Department and actually getting some decent Numbers. 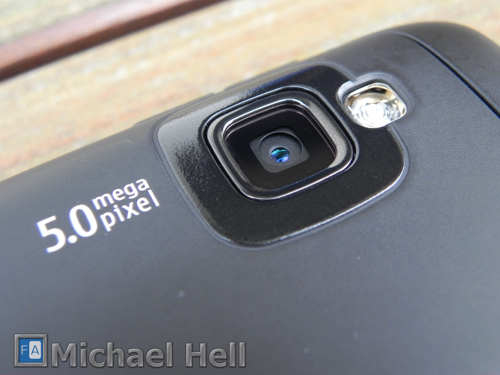 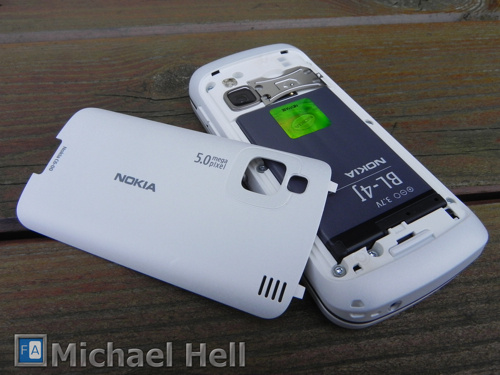 Overall, the Hardware is just right. I found no major Mistakes on it, but then again, it’s no Device at N-Series Standards. What you get is solid Hardware for a reasonable Price.

Software: The Nokia C6 is running on Symbian^1, okay, S60 5th Edition, Symbian OS version 9.4 to be politically correct. It basically is a N97mini, so you’re getting well known Widgets, which i miss quite a lot on the X6 for example. It misses the Multimedia Menu Key in the right upper Corner, which i think would be very popular amongst the aimed Audience for this Phone. The Menu, for an early firmware, was snappy and worked well. I didn’t have any hangups or freezes so far, which is a very good Sign. However, it has some really nice Improvements, that i wanna tell you about shortly:

Mail Client Improvements: to put this in a Nutshell, it is the E72 Nokia Messaging Version, optimized for Touchscreen. It’s very easy to set it up and works very well.

Smart Dialing: Finally! Start typing on your Homescreen and the C6 will suggest you with the first Letters of the correspondent Contact. I have been waiting for this quite some Time from the E-Series and now finally it has arrived! Once you have your right Contact chosen, click on it again and you get the handy Menu to create a new SMS, Call or Video Call. love it!

New Lock/Unlock Screen: This is maybe just a little Thing again, but it makes Life with the C6 so much easier. When the Screen is locked, push the Menu Button (which also serves as Notification Light by the way) and the Screen gives you a quick overview about Time, Date, missed Calls and SMS. Fantastic Stuff. There’s also a nice little “Slide to unlock”-Bar, similar to the Bars you get when someone calls you. 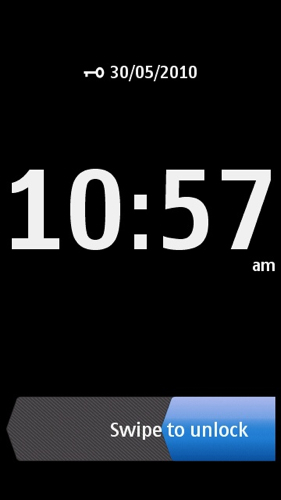 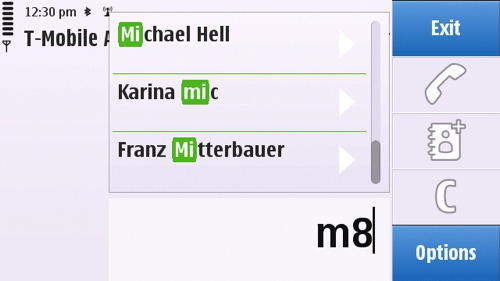 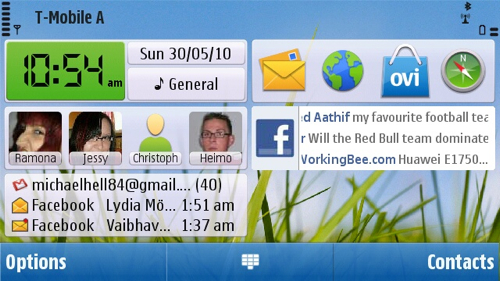 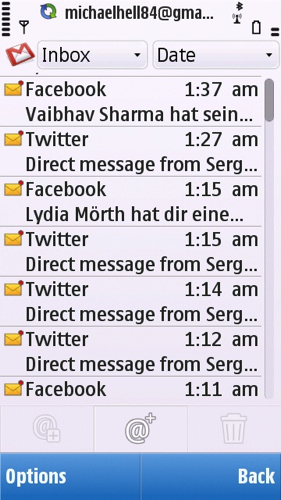 So to conclude my (early) Thoughts about the Nokia C6: I think it’s actually a great Device for People with a smaller Wallet, who still wanna have this “i have an eye-catcher device”-feel!  If you don’t actually “need” N-Series Qualities, but rather  a solid Device for good Money and great Possibilities, get out and get the C6 as soon as its available. It’s no super-uber Device, and it’s not supposed to be. I know quite some People whose favourite Form Factor is a Touchscreen + slide out QWERTY, and they all raised their Eyebrows when i told them about the Price tag. The 4-row keyboard is a huge WIN for me, as its just so much better to write on than those 3-row solutions they had earlier. The D-pad might not be everyone’s taste, but i’m good with it. For quick Snapshots we have a 5 Megapixel Camera on Board, with Autofocus and a Single LED Flash. The Software offers some nice Tweaks and is snappy, plus with smart dialing and the new lock screen it comes just a bit more handy.

My Mind hasn’t changed, i think the Nokia C6 will sell really well – for good Reasons!