Netflix has officially launched its service in India as expected. The US based popular TV shows and movie streaming service is now available in the country with plans starting at Rs 500 per month.

The Netflix library includes an array on national as well as international content. At present, Netflix is offering a wide number of new and old Hindi movies like Piku, Lootera,Hum Apke Hai Kaun, Andaz Apna Apna and many more. In case of international content, the service has popular TV shows like How to get away with Murder, Narcos, Dexter, Suits, Orange is the new Black and so on. Also present are a large number of new and old Hollywood movies. Kids content includes animated movies such as Madagascar, Monster Inc, Barbie among others. In 2016, the company plans to release 31 new and returning original series, two dozen original feature films and documentaries, a wide range of stand-up comedy specials and 30 original kids series. 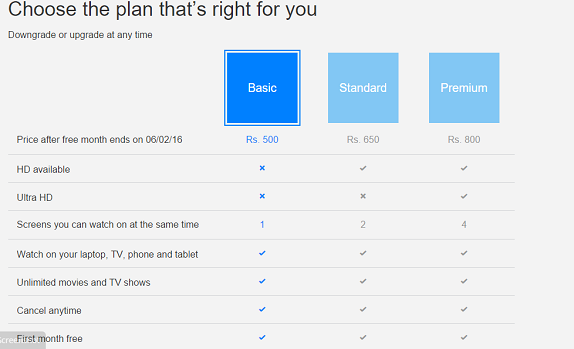 Netflix is offering one month’s free trial for users in India. Users can access Netflix through an app on a smart TV, a videogame console, a streaming player or a smartphone/ tablet. You can check out Netflix here.