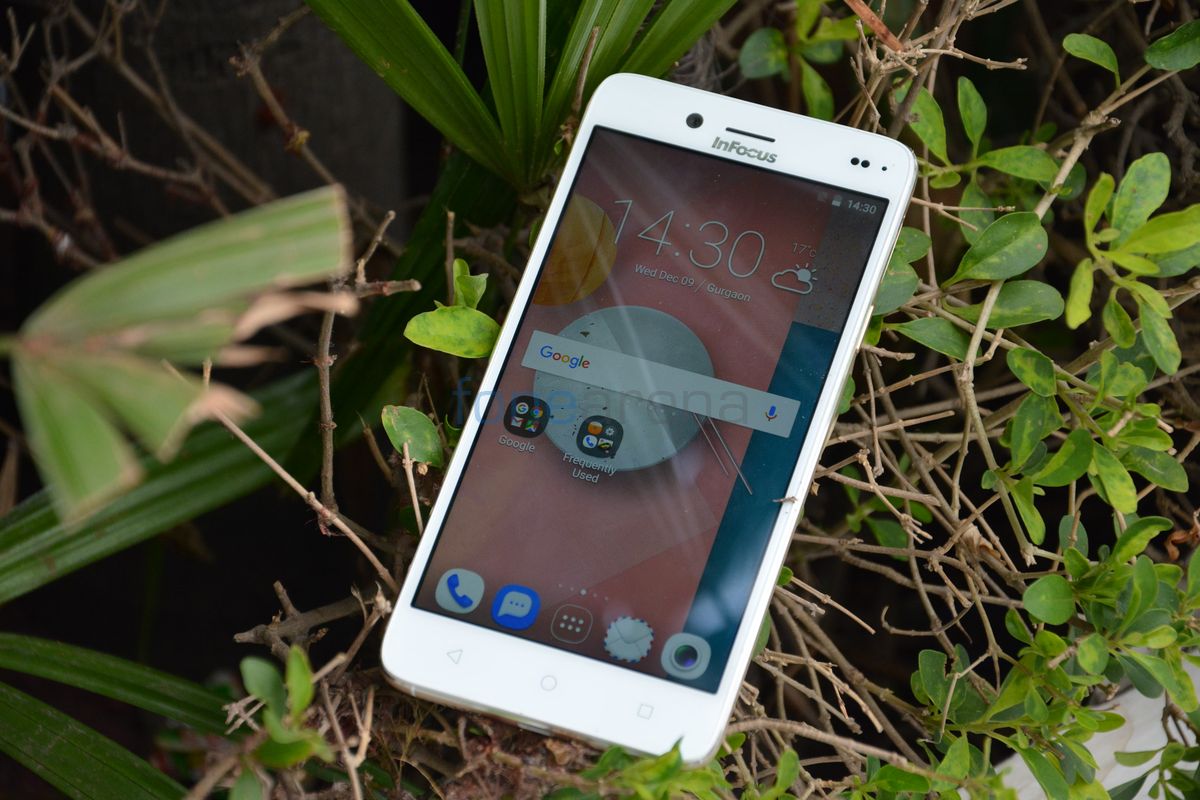 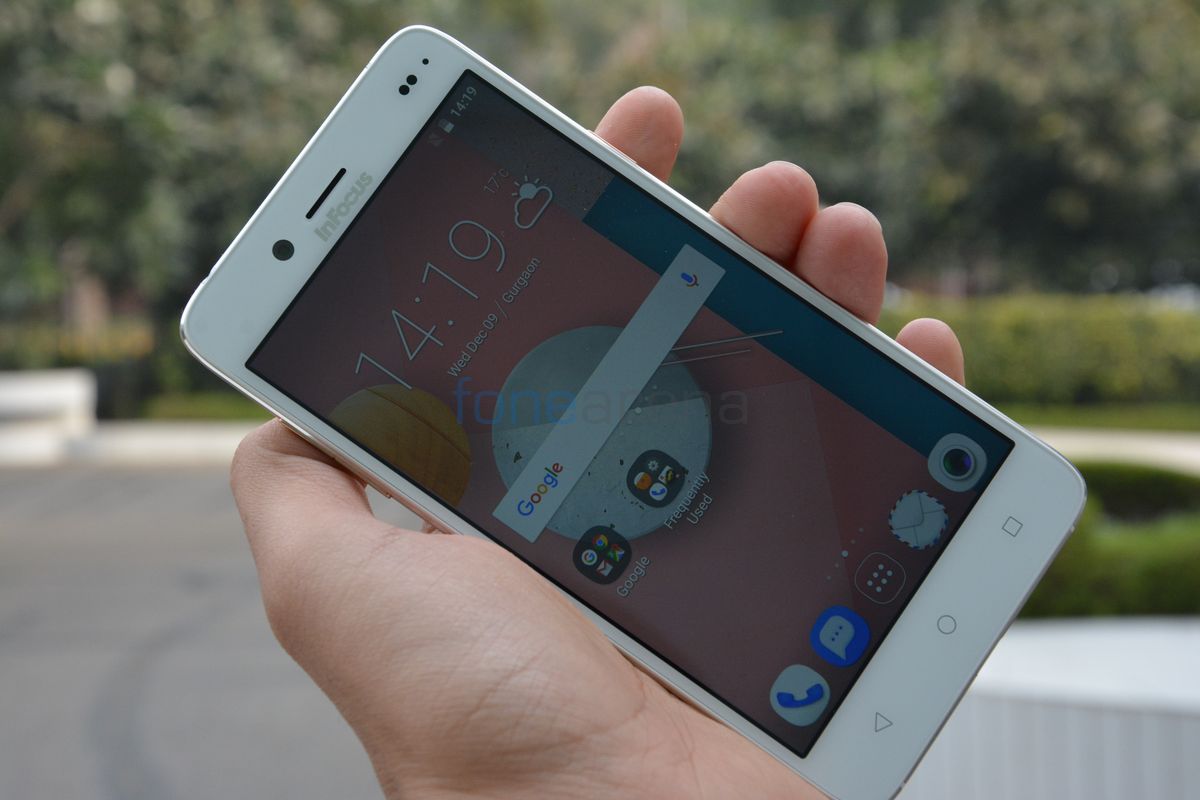 InFocus in India launched the mid-range M680 smartphone for Rs. 10,999 on Monday. It is available for order exclusively on Snapdeal and goes on sale starting 21st December. First 2000 buyers will get a selfie-stick worth Rs. 1,000 for free. The phone specifications look good on paper but does it convert in real-world performance, we find out in our full review. 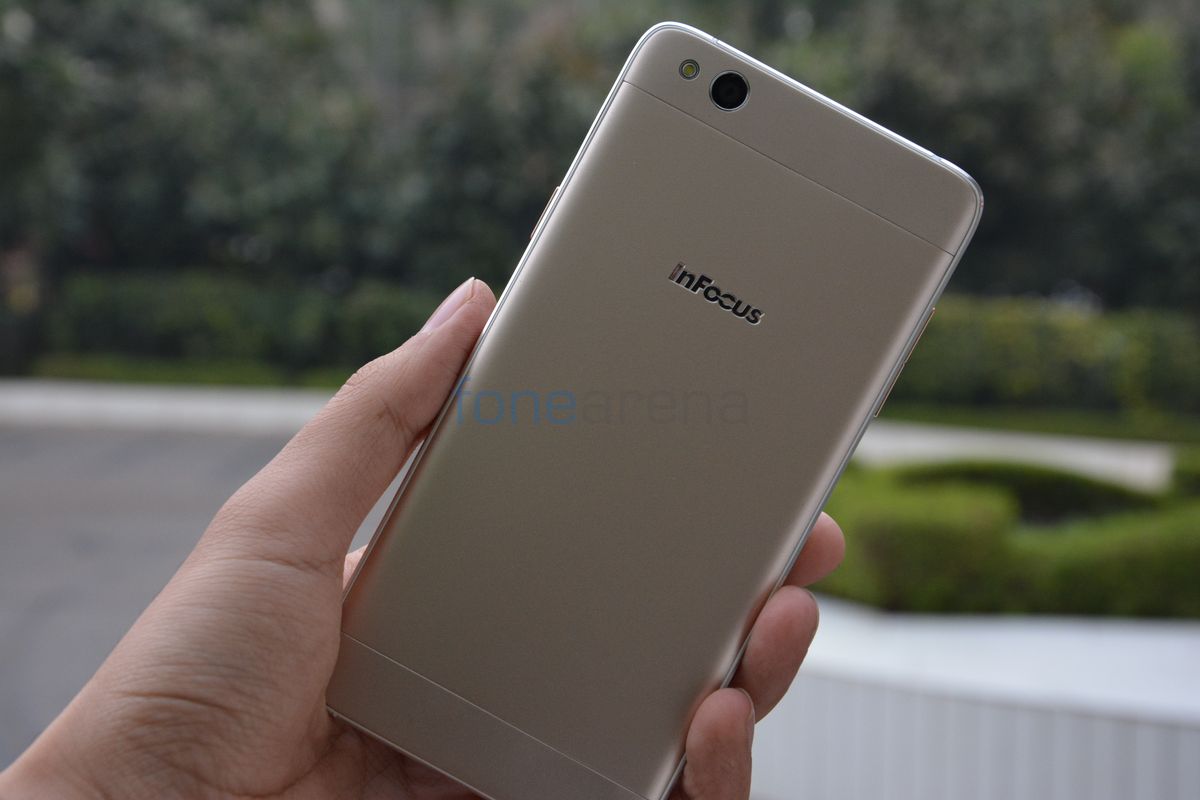 The design of InFocus M680 revolves around its metal rim with chamfered edges. The phone comes in two colours – Gold and Silver, and as you can see in images – we have reviewed the Gold colour device. Apart from the metal rim, the phone has plastic uni-body. The front panel around display is of White colour, rest everything in M680 will either be of Gold or Silver colour – depending on what you buy. The back is made of plastic and has got nice matte finish, so it doesn’t attract fingerprints.

Upfront, the M680 features a 5.5-inch 1080p display. The secondary 13-megapixel front facing selfie camera along with earpiece grill with proximity and ambient light sensors and notification LED sit above the display. The three capacitive touch buttons (back, home and recent) are located below the display, but are not backlit. 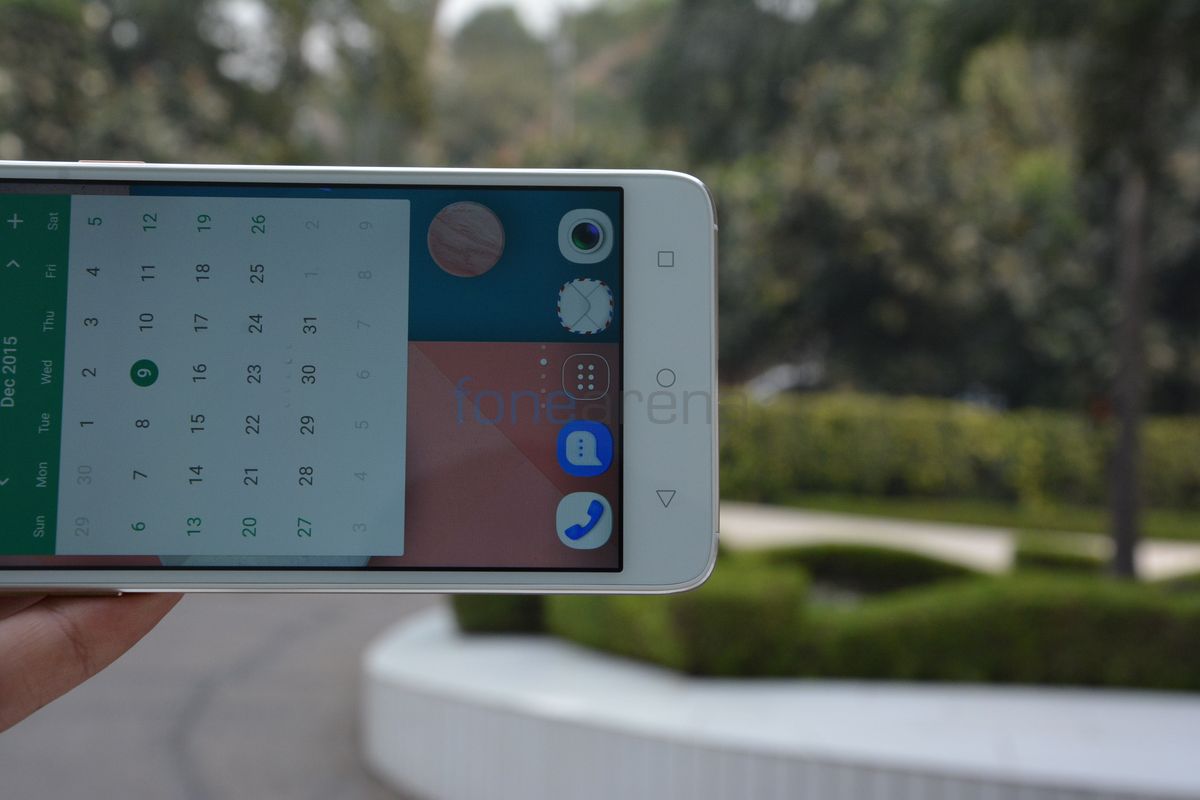 The 13-megapixel primary camera with LED flash is located on the top-left corner of the back. 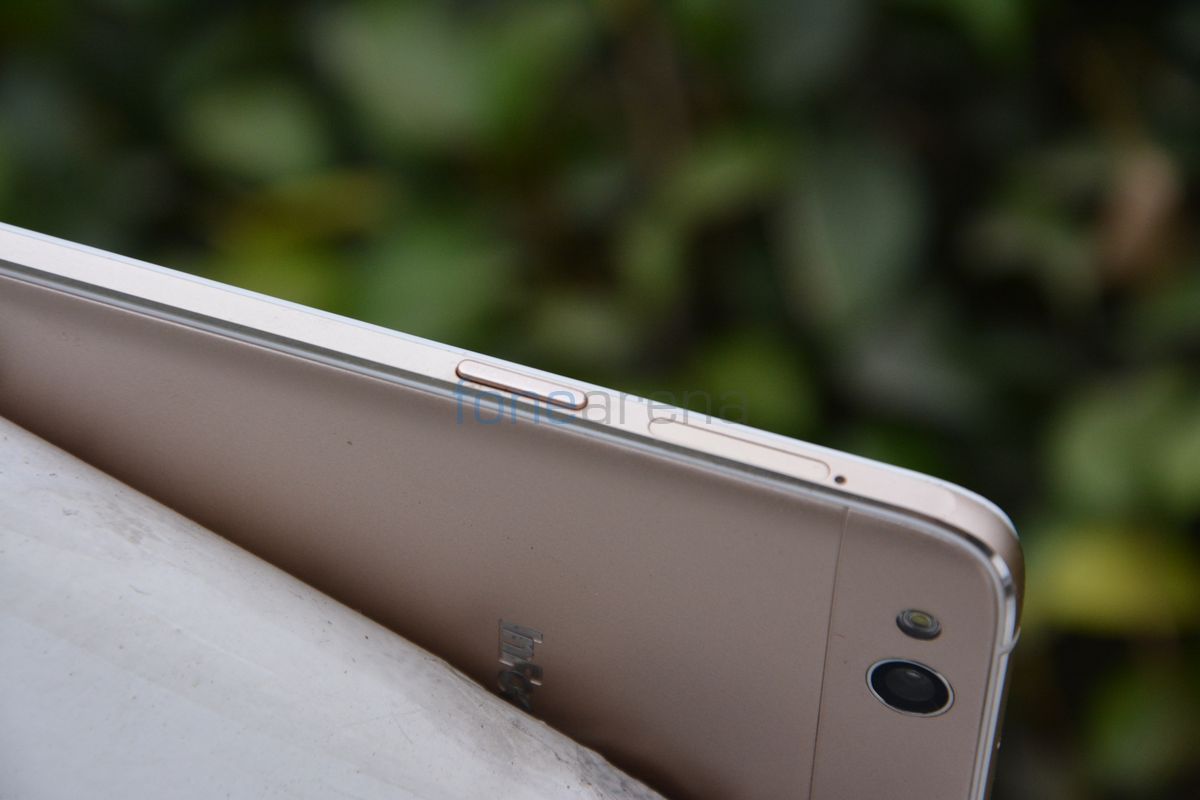 Left side of the handset accommodates the volume rocker, while the power / lock key is on the right. Also, the right edge has the SIM card tray which is a hybrid slot, but both SIM slots takes the Nano-SIM cards. The secondary SIM slot also doubles up as a microSD card slot. 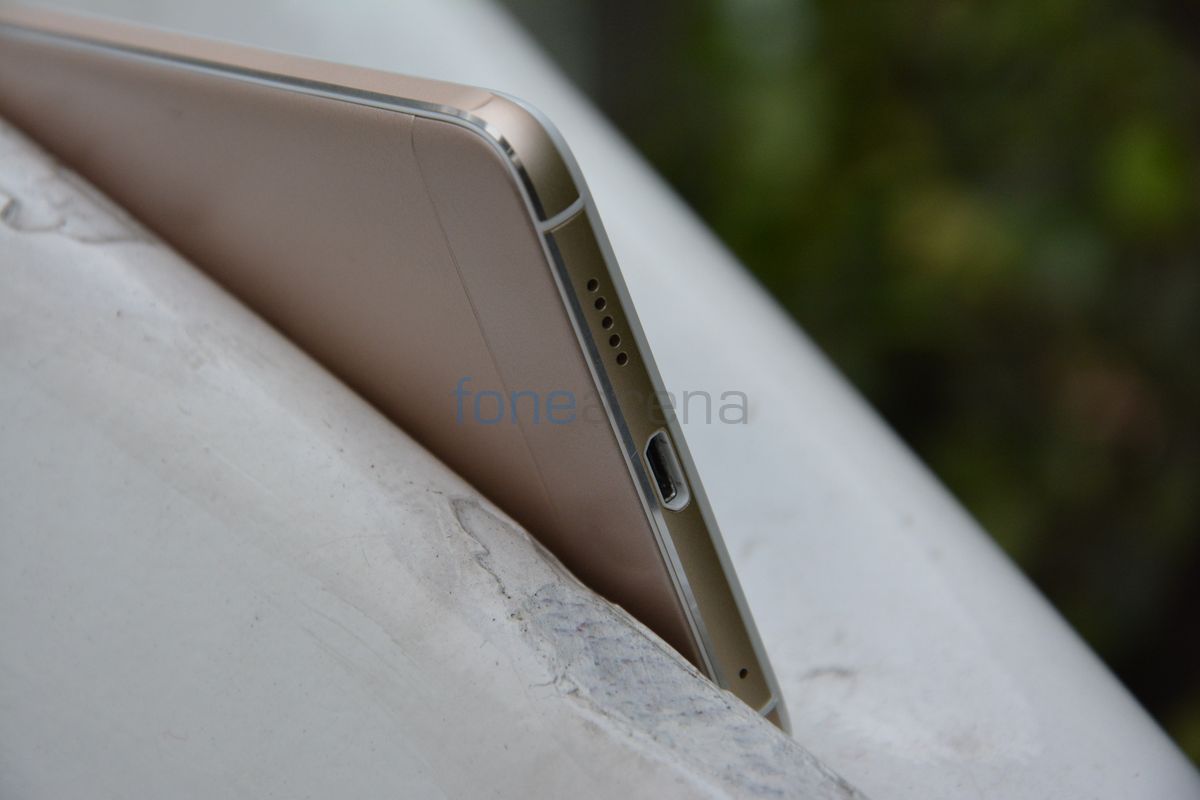 The top edge has got the 3.5mm audio jack along with secondary noise cancellation mic. The bottom edge features the Micro-USB charging / data syncing port along with single speaker grill and primary microphone.

The M680 handset measures 156 x 76.8 x 7.25 mm and weighs 158 grams. Overall, we found the InFocus M680 to be an average looker with sturdy built. While the back and metal rim gives it a premium feel, the dull plastic front is not appealing.

The InFocus M680 features a 5.5-inch full-HD (1080×1920 pixels) display from Sharp, with fixed tempered glass protection. We felt the display to quite reflective and more pasticky, may be because of the tampered glass covering on top. At the same time, it is surprisingly less glossy and you’ll see very little smudges / fingerprints as a result. 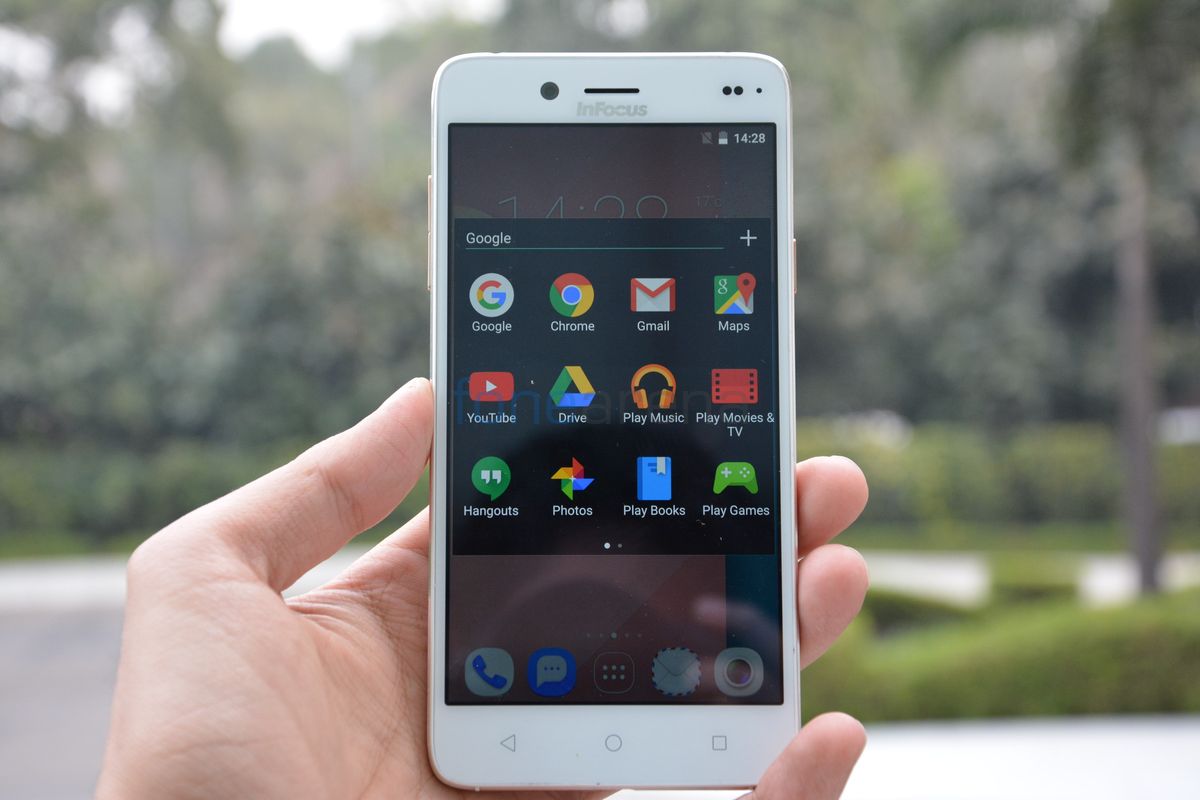 The 5-inch 1080p panel from Sharp reproduces colours nicely, and appears less saturated and more close to natural. The viewing angles are impressive as well, but the Sunlight legibility is poor because of low brightness levels – so you will have a hard time viewing the display under Sunlight. Overall, the display isn’t the best thing in InFocus M680, nor it is the worst thing. But in comparison, it only lacks the competition, so we can’t categorize it as the best display around.

The InFocus M680 packs an octa-core 64-bit MediaTek MTK MT6753 SoC clocked at 1.5GHz, coupled with Mali-T720 MP2 GPU and 2GB of RAM. It runs Android 5.1 Lollipop with company’s InLife UI 2.0 out-of-the-box. InFocus also promises that the phone will be upgraded to Android 6.0 Marshmallow in future, but there is not timeline for the update. 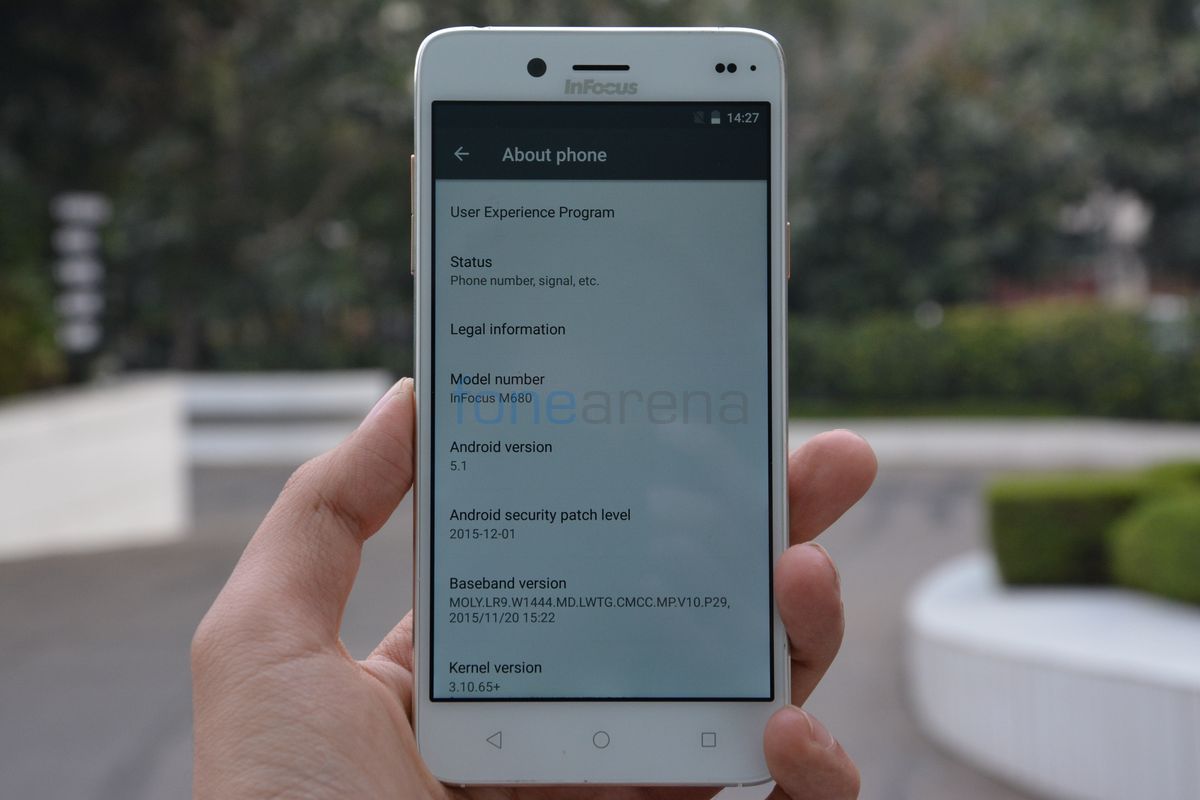 Out of the 16GB internal storage, users’ get 9.25GB of free space upfront, which is additionally expandable via microSD card (up to 64GB). Users also have an option to move apps from phone to microSD card. The phone also supports USB-OTG.

In performance department, the InFocus M680 is as good as the Lenovo K3 Note, and remains mostly consistent while muititasking. Apart from the non-uniform InLife UI design, we don’t have much complaint about this phone. We have talked the UI in our previous reviews of inFocus smartphones, so you can read that out for more. 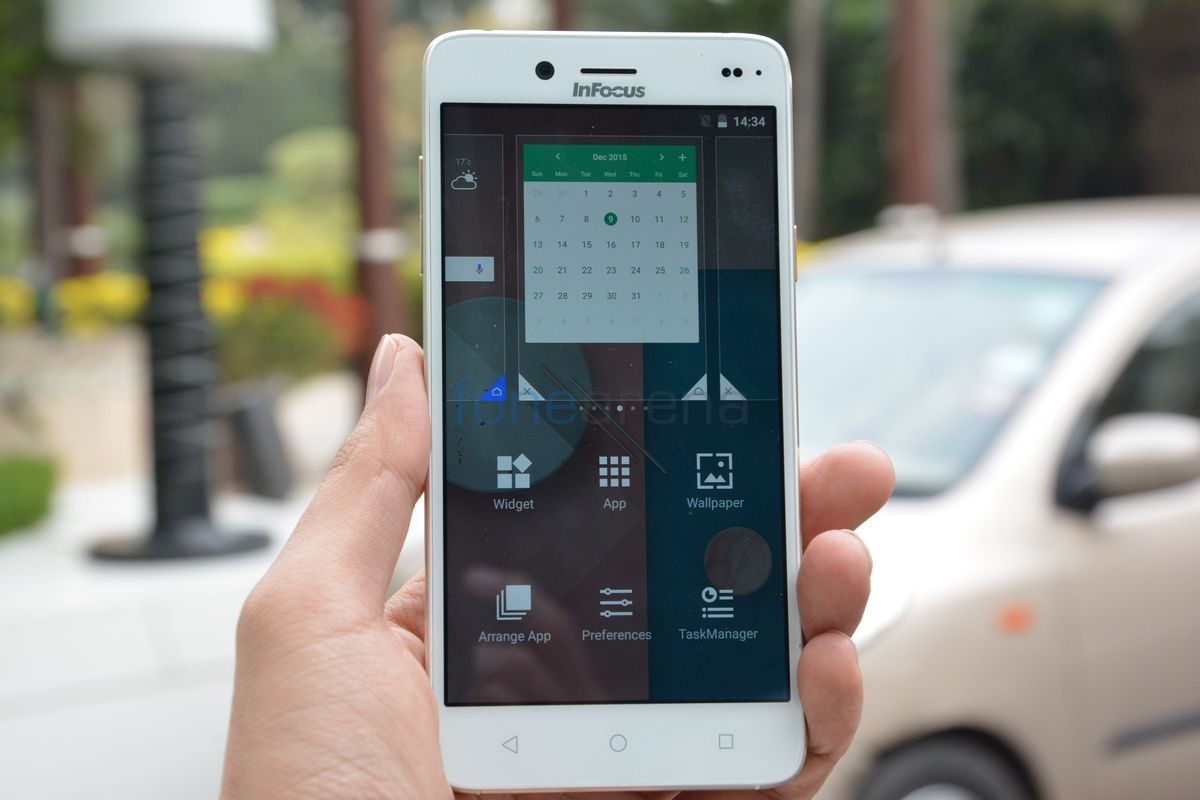 The M680 like all other InFocus smartphones lets you switch between one single layer homescreen like most Chinese UI’s without app drawer or two layers like stock Android with app drawer. The three capacitive touch buttons below the display do not lit up. These only work 7 times out of 10, so it doesn’t have good accuracy.

Talking about the audio and gaming performance, the heavy games like ‘Asphalt 8’ runs smooth on the device, and audio output is fine in loudspeaker too. Although the audio output in headphones is little low. Please note, we didn’t get a headphone with the review device, it was our own pair of goo quality headphones. For ‘FM radio’ lovers, the phone also has that built-in. 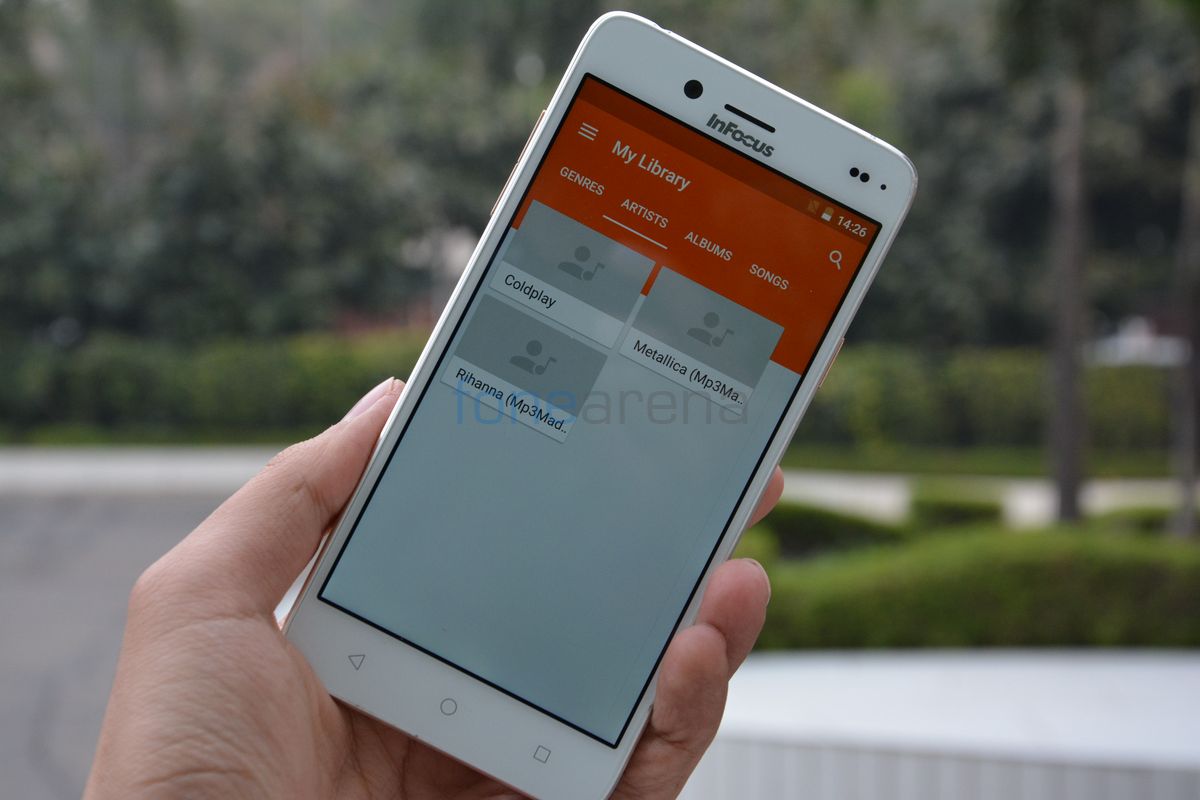 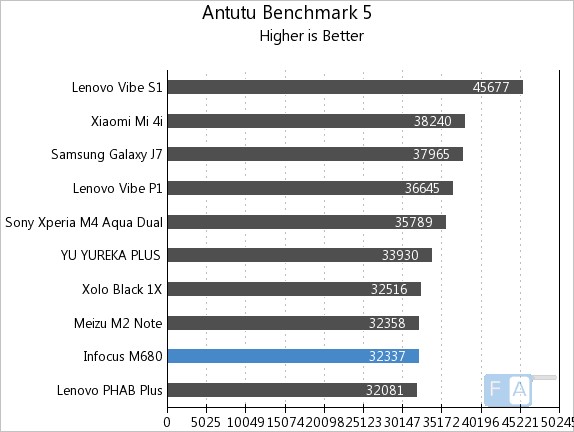 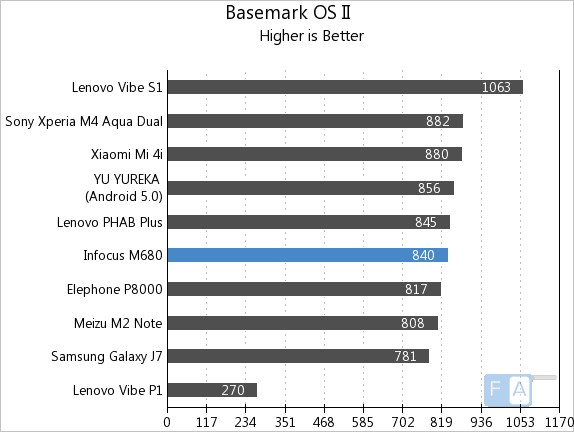 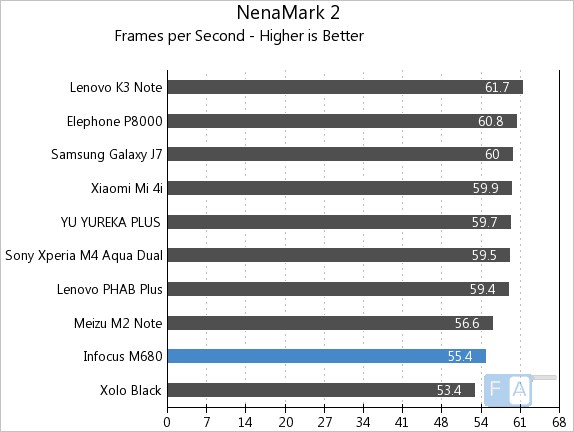 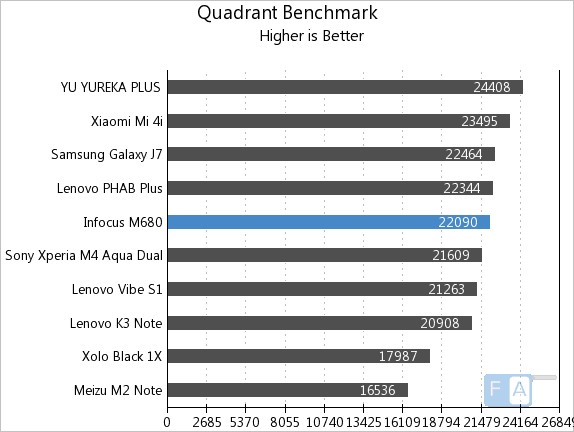 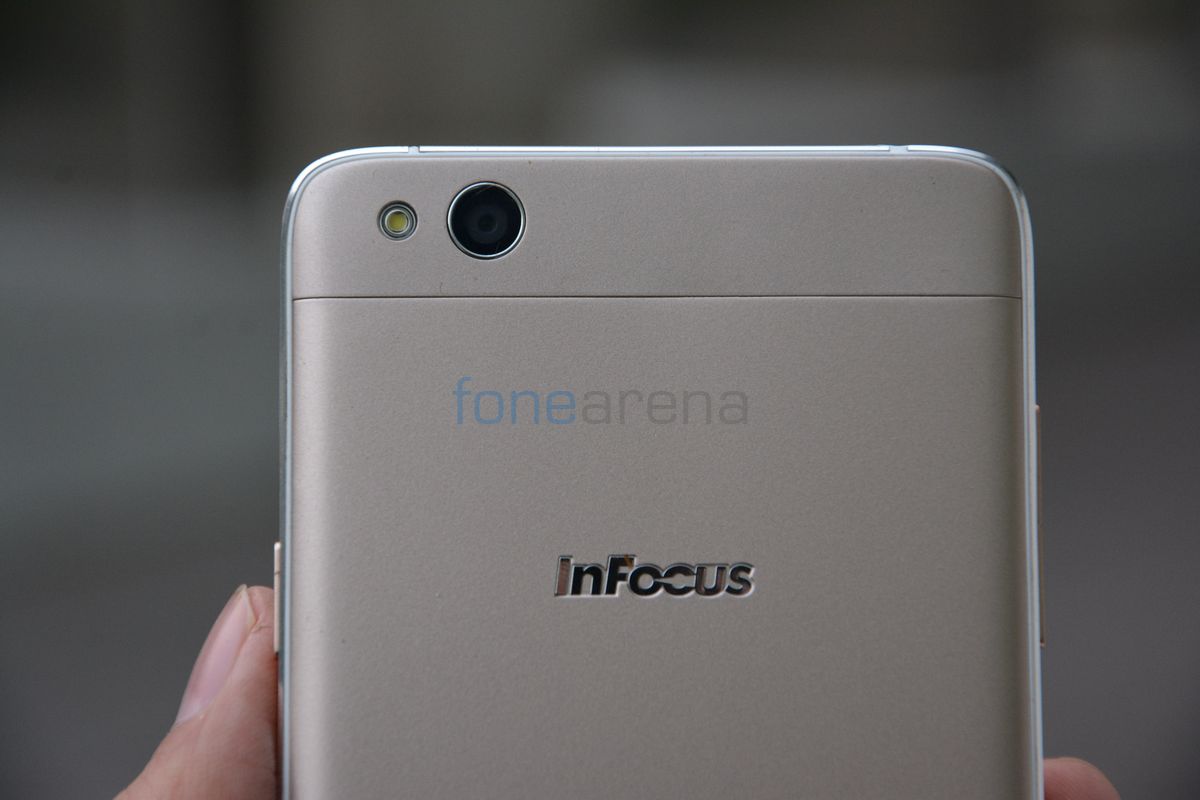 The rear 13-megapixel shooter can capture good shots in daylight, but misses’ sharpness slightly. The colour reproduction appears close to natural. HDR shots appear even better with more details, but the shutter speed in both cases takes longer time. Low-light images had noise and didn’t autofocus most of the time. Talking about the front 13-megapixel camera, the images had almost perfect white balance and got captured little faster than the rear, but the difference was very minimal. Stock camera app in InFocus M680 doesn’t include many features like previous InFocus devices, so you will be better off a third party camera app instead. 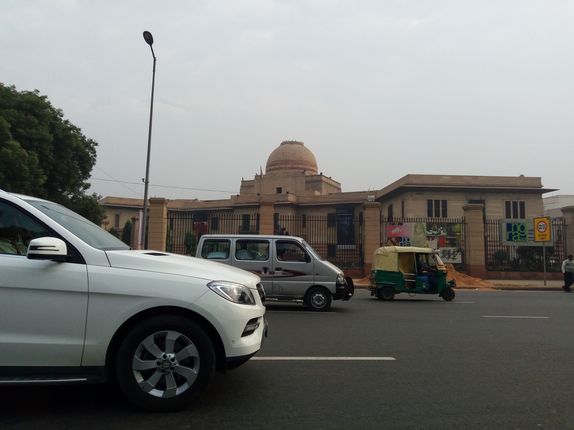 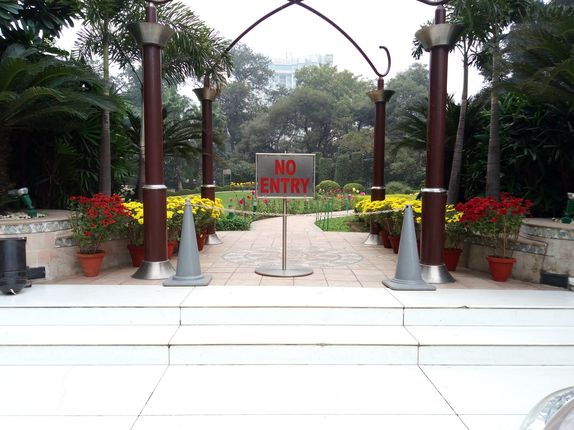 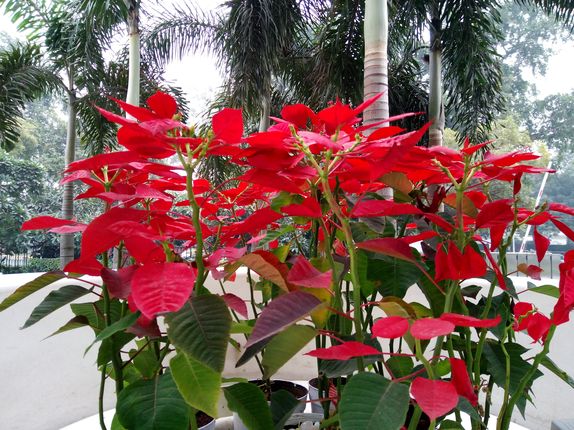 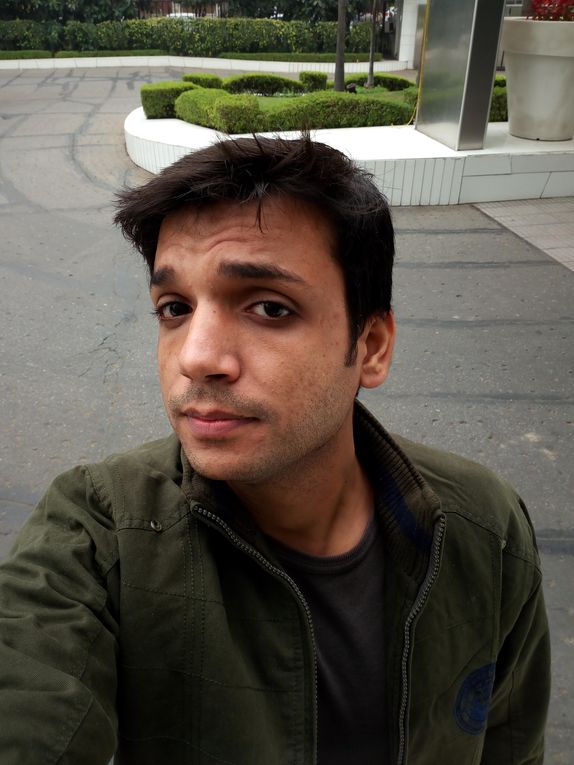 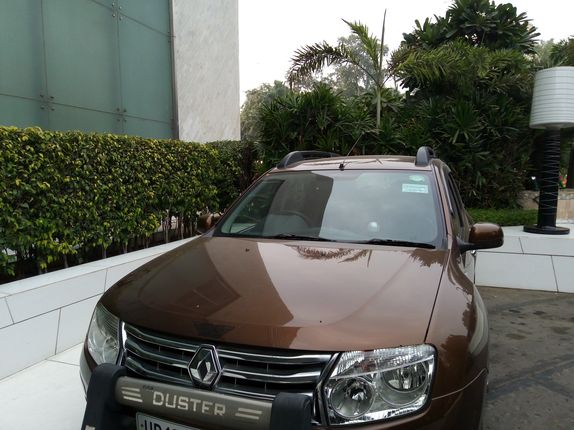 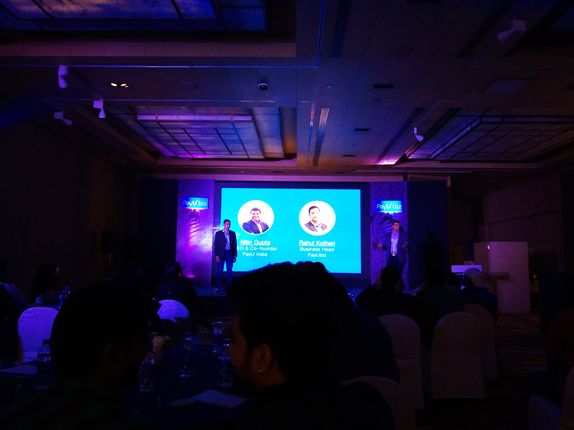 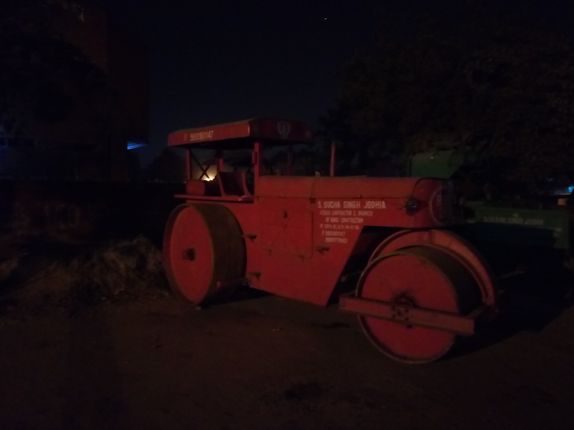 The InFocus M680 is a dual-SIM device that can accommodate Nano-SIM cards only. The phone also supports 4G LTE for FDD-LTE 1800MHz Band 3 and TDD-LTE 2300MHz Band 40 in India.

The SIM 2 slot is hybrid, so it can either take a Nano-SIM card or a microSD. The microSD card can add up to 64GB of additional storage to the existing. Other connectivity options include Wi-Fi 802.11 /b/g/n (2.4G), Bluetooth 4.1, and GPS/ A-GPS. The smartphone has proximity, ambient light, E-compass, and G- sensor on board. 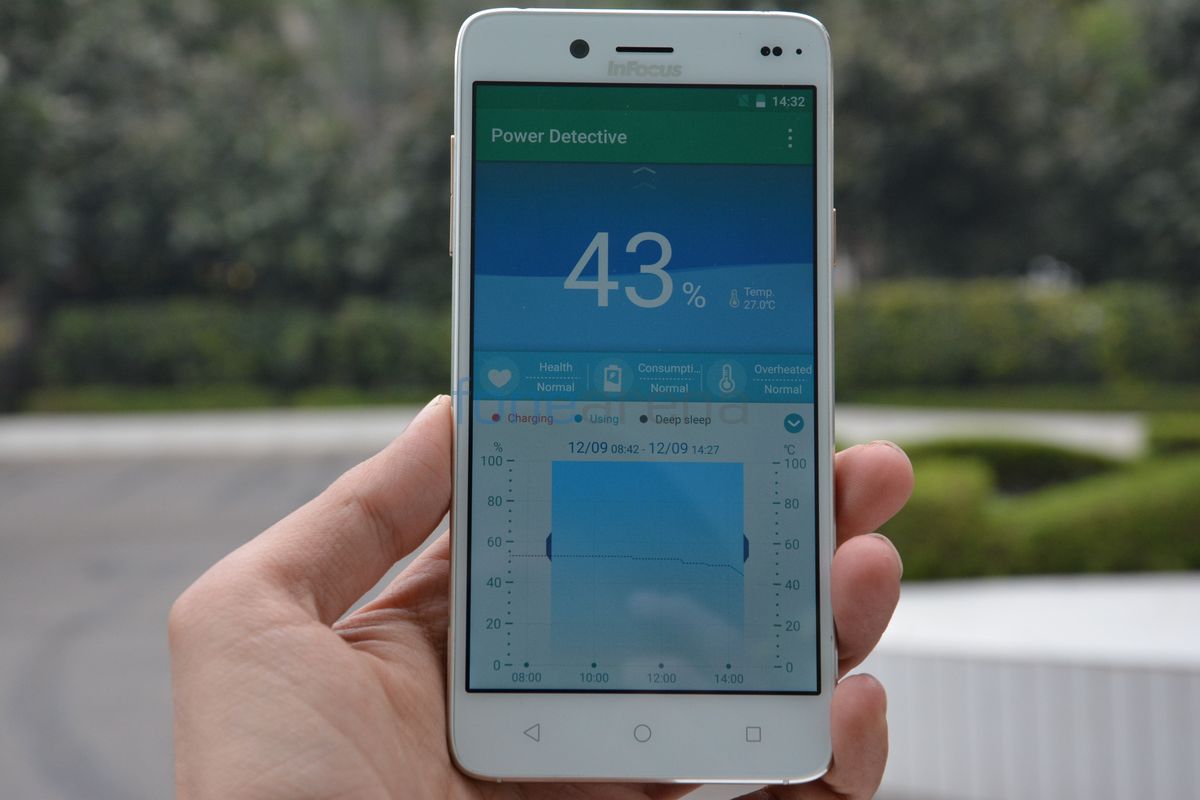 The M680 is backed by non-removable 2600mAh battery. In our review time, it could easily run through a full-day, which is mostly because of the app management of InLife UI. Our battery rating for the InFocus M680 is about 12-13 hours on a single charge for an average user.

Overall, the InFocus M680 is one of the better smartphone in company’s portfolio in India. At Rs. 10,999, it is a decent and consistent performer, but then the display isn’t as good as it should have been and the capacitive buttons below the display lacks accuracy. We don’t know if this was the case with our review device only, but considering InFocus as a promising smartphone player, we hope that these small details will be taken care of in the future. 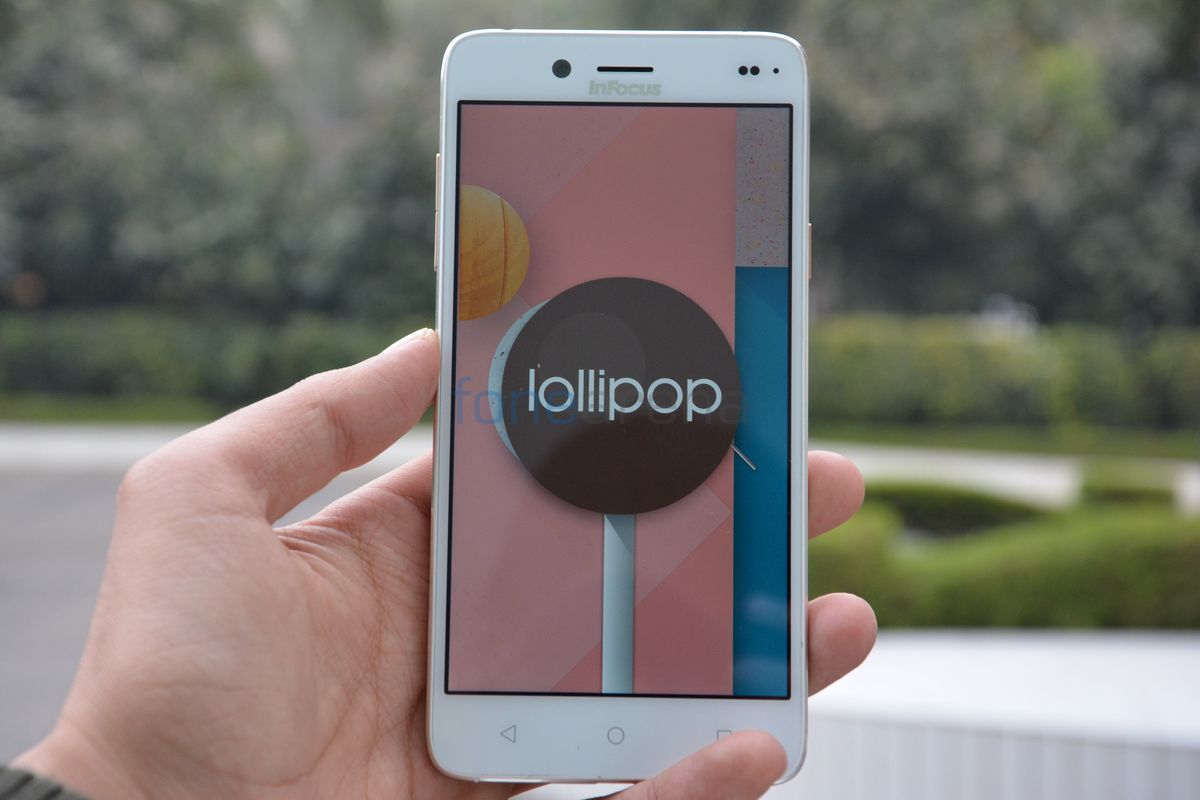 In our opinion, the InFocus M680 is certainly a competitive device for the other popular smartphones in this price segment such as – Lenovo K3 Note, Asus ZenFone 2 and Xiaomi Mi 4i. We feel that the smartphone will serve you good for the price, if not best. Other than the less consumer confidence in the InFocus brand, there is nothing majorly wrong with this smartphone.