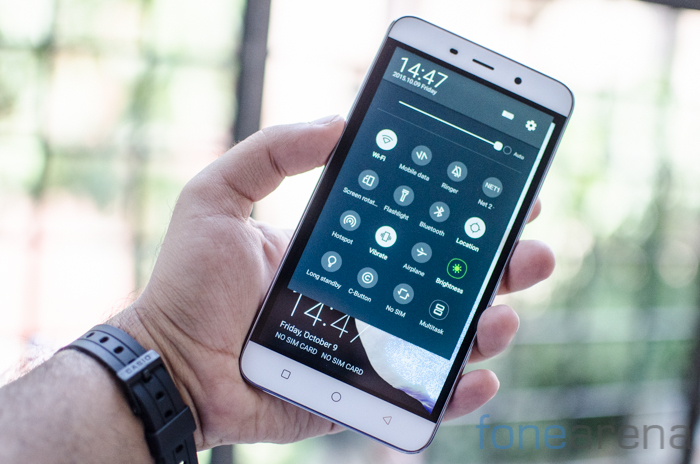 Coolpad which remains one of the strongest brands in its home market of China has been facing stiff competition from the likes of Xiaomi, Meizu and others. In a bid to grow its share further, the company has been dabbling in the Indian market and the the newly launched Coolpad Note 3 might be its strongest effort ever. As we put this fingerprint scanner equipped handset through its paces, we’ll analyse what makes the phone tick. Here’s the FoneArena review of the Coolpad Note 3. 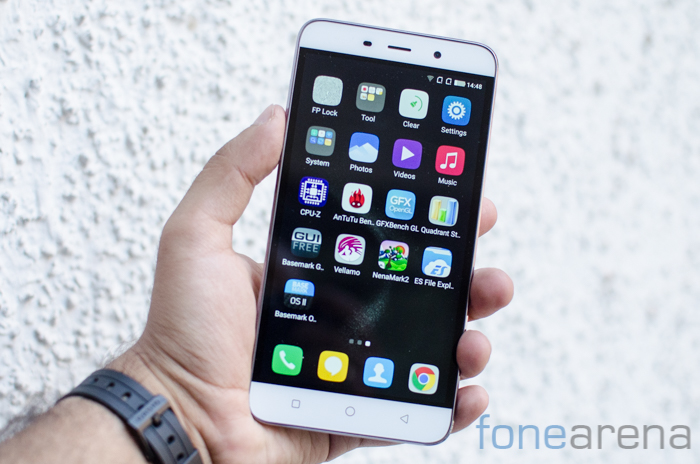 The design of the Coolpad Note 3 is familiar yet fresh. The phone tries to minimize bezels and keeps a large screen to body ratio. The front of the phone sports a large 5.5 inch display and has the usual camera and proximity sensor up top. At the bottom you’ll notice the three capacitive keys that correspond to home, back and multitasking actions. A nice addition is the presence of a metal band around the phone that is slightly raised and prevents the screen from touching the surface if you place it down.

Moving over to the sides of the phone, you’ll notice that the rear facing edges gently curve over making the handset very comfortable to hold. To the left side lies the volume rocker while the right side of the phone sports a power button. The tactile feedback is satisfactory from the buttons though we would have preferred a slightly more reassuring press. Nonetheless, they work as expected. Up at the top is the 3.5mm audio jack while along the bottom edge of the phone lies the micro USB connector. 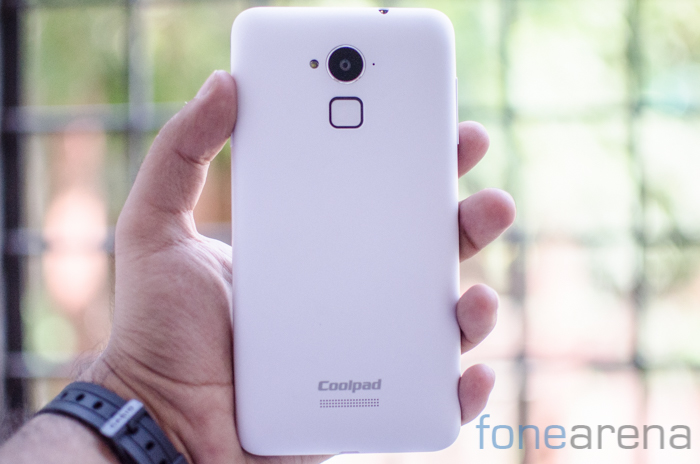 Turn the phone over and you’ll notice a curious addition. Alongside the 13MP camera module, LED flash there is the addition of one more thing. As you would have guessed by now, this is the fingerprint scanner that is perhaps the highlight of the device. Nicely recessed inside a hollow to prevent inadvertent touches, the scanner is a truly top notch module. From initial scans to logging into the device, the scanner worked incredibly well no matter the orientation at which you touched it. Very impressive indeed. The handset measures 151.00 x 77.00 x 9.30mm which is fairly compact for a device with such a large screen. More than the size, we were impressed by the ergonomics and how comfortably the phone sits in the hand. At 155 grams, the handset isn’t too heavy either.

No matter how good the hardware, it is the software that makes or breaks a phone. On the Coolpad Note 3, thankfully the software manages to live up to our expectations for the most part. Based on Android 5.1 with what the company calls Cool UI onboard, the phone remains smooth for the most part. Yes, there are a few jitters here and there but that’s mostly only when you are using the multitasking feature that enables two apps to run side by side. 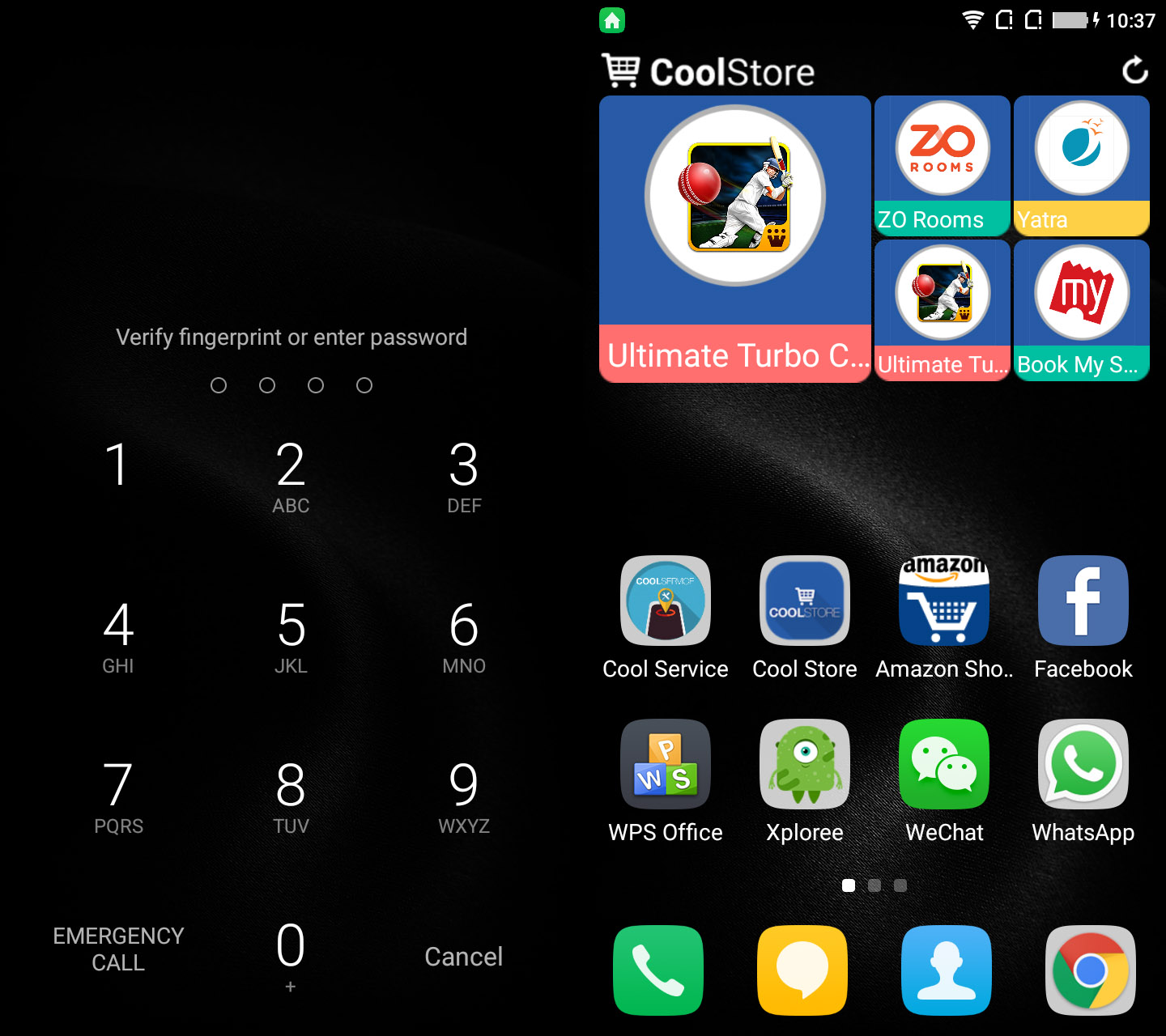 As mentioned earlier, the phone comes with a fingerprint scanner built into it and it behaves pretty much the same way that passcodes have on Android devices. You can either touch your finger to bring you straight to the homescreen or tap the power button to get you to the lockscreen wherein you can enter the passcode. Talking about the homescreen, it is a very simple affair akin to the iOS way of presenting applications. Eschewing a two level hierarchy for applications, the phone places all apps in a grid on the homescreen itself. Whether you like it or not, this comes down to a personal preference. It is of course possible to install a third party launcher to change the interface altogether. 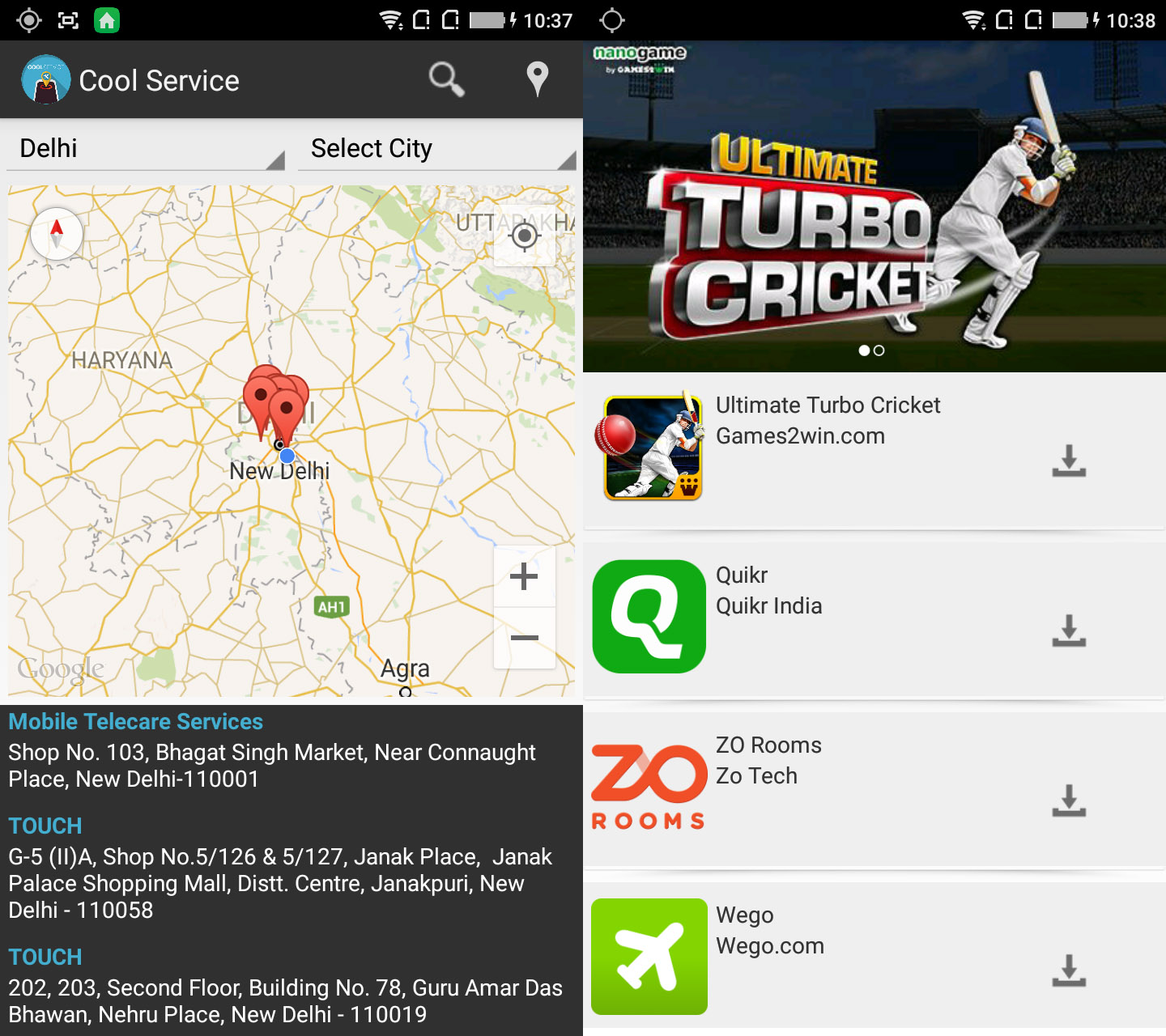 We liked that the pre-installed applications have been kept to the minimum. Of these, a few are useful and the others not so much. You’ll find Facebook, Amazon, WhatsApp, WeChat, WPS Office, Xploree, Cool Service and Cool Store preinstalled. While most of the others are fairly well known, we were curious about the Coolad branded offerings. As it turns out, Cool Service is nothing but a city based listing of all the service outlets that the company has. It also gives you a location on Google Maps which is quite a nice addition. The other is called Cool Store and we fail to see the utility that it offers. The application is essentially a Coolpad branded app store that offers a curated list of recommended applications but you’d be better served by using the Play Store instead. I suppose the silver lining here is that Coolpad allows you to choose and install apps from this list instead of burning them in the ROM itself. 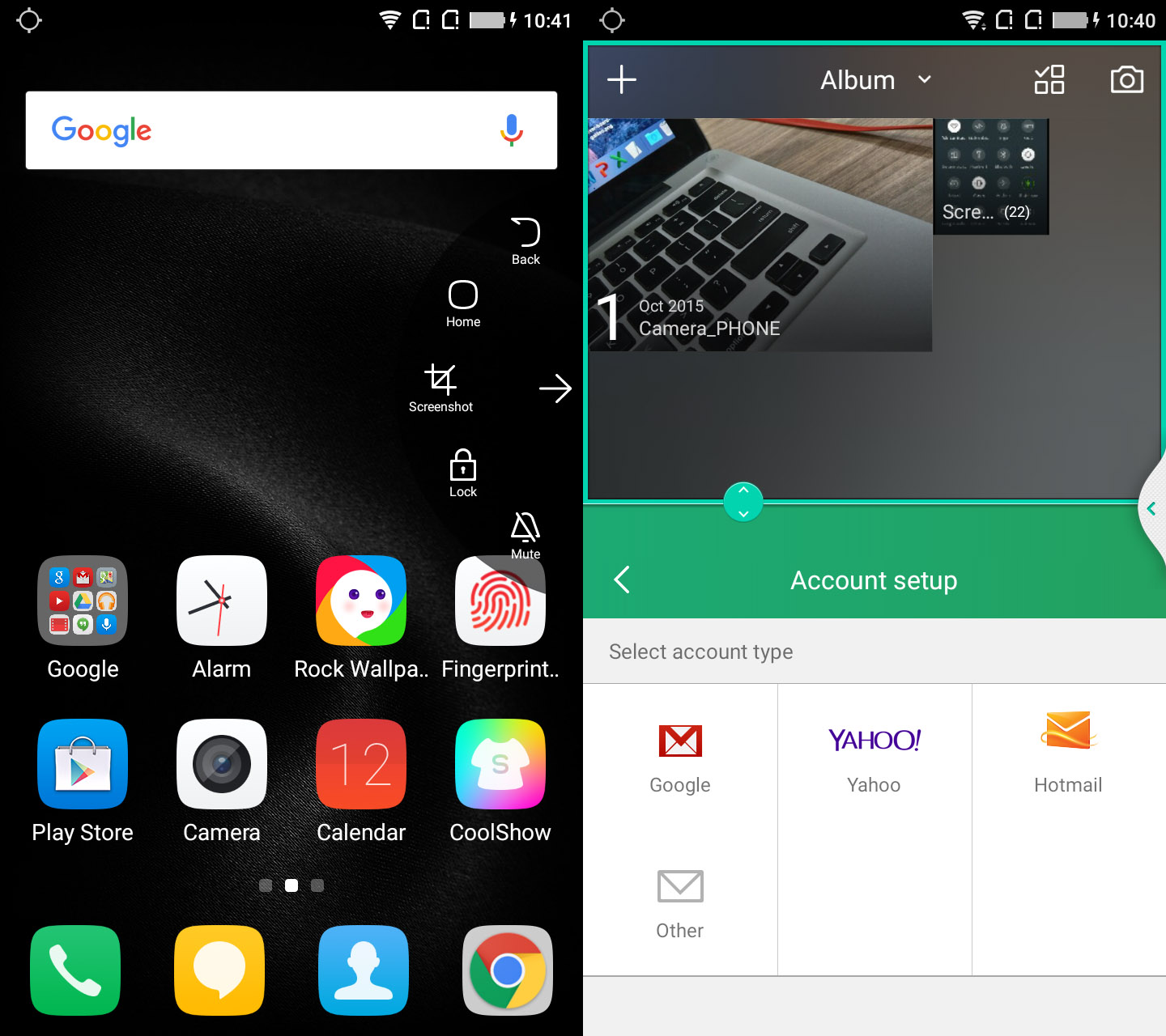 There’s a few more nifty additions to the software mentioning. Drop down down the notifications shade and you’ll notice two shortcuts marked as C and Multitasking respectively. The former activates an on screen shortcut key that you can drag and place anywhere. Tap it and it will replicate most of the actions of the capacitive buttons while also offering shortcuts to take a screenshot or to switch the profile to mute. The multitasking shortcut on the other hand allows you to run two applications simultaneously on the phone. As you would expect, there is a bit of a slowdown on using this feature but it is surprisingly effective and usable for basic social media applications. All in all, the software on the Coolpad Note 3 is fairly robust and delivers a good enough experience.

The commoditization of hardware is reaching critical mass. Silicon that was once considered the mainstay of pricey flagship is now cheap as chips. The Coolpad Note 3 is powered by a 1.3GHz Octa-Core 64-bit MediaTek MT6753 processor with Mali-T720 MP2 GPU. Sure, it might not have the highest clock speed but those eight cores certainly keep everything running nice and smooth all the way around. Pair it with up with a whopping 3GB of RAM and you’ve got a device that is surprisingly robust and especially so for the price it commands. Over the week of testing we put the handset through, the performance remained slick throughout. The only exception was when using the multitasking feature where you have multiple apps displayed on screen simultaneously. Of course the device is far from a powerhouse so you’ll have to temper your expectations. Apps will take a split second longer than on a higher end device to start up, you might not get as high a frame rate in games but the key take away was that the hardware and software has been optimized to the point that day to day performance is never hindered. We’ve also included some benchmarks below to give you some comparative scores but do keep in mind that real life performance doesn’t always echo the results from a benchmark. 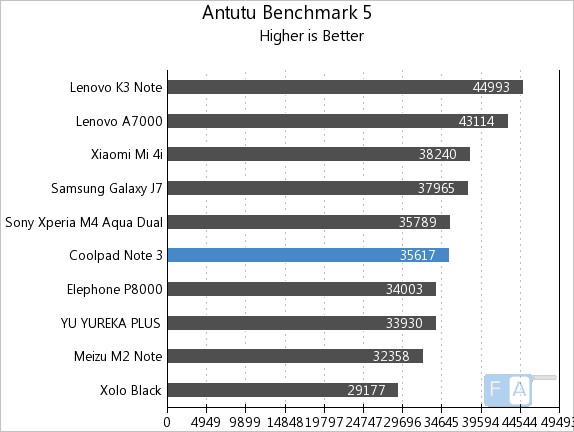 In the AnTuTu benchmark, the phone scores 35617 points which makes it competitive with the likes of the Sony Xperia M4 Aqua. 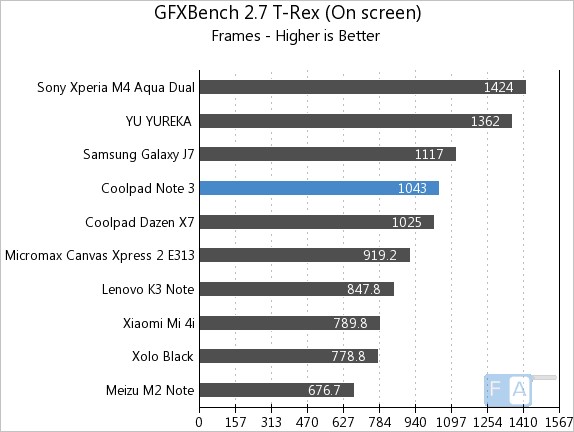 In the GPU centric GFXBench benchmark, the phone scores 1043 points which is about par for the course. 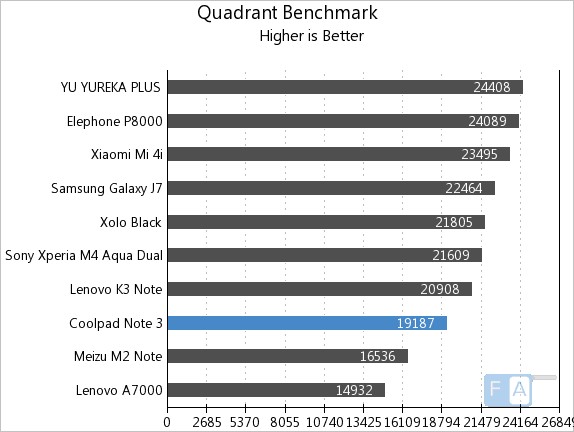 The results for the Quadrant benchmark prove to be somewhat disappointing as the phone scores 19187 points placing it towards the bottom of the competition listing.

The Coolpad Note 3 comes equipped with a 5.5 inch display with a resolution of 1280×720 pixels. This is an HD IPS panel and a very bright, vibrant one at that. There’s a few who might be disappointed by the lack of a Full HD panel and while the omission of said panel is certainly regrettable, the 720p panel proves to be competent enough. 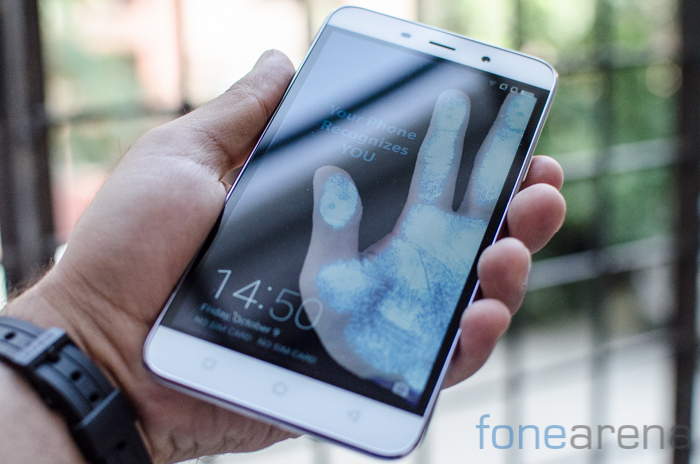 Bright and vibrant, we found the color accuracy to be good. The phone remained visible outdoors due to the bright display on offer. The extra reflective surface of the device played truant with visibility in bright environs but the display was able to mitigate this to a large degree.

With a 13MP rear camera and a 5MP front facing shooter, the Coolpad Note 3 seems to have good camera credentials at least on paper. That said, the proof is in the pudding and we tested out the camera in a range of scenarios to gauge if it was any good. 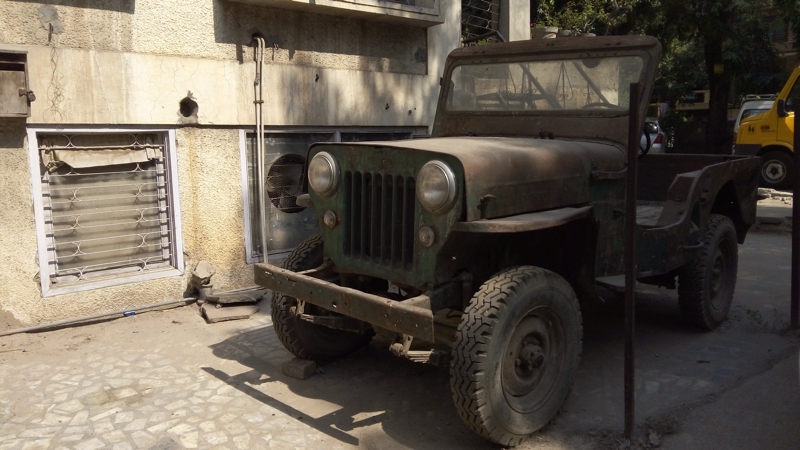 In bright sunlight, the phone performed admirably. Images were well detailed and the colors were natural. Noise levels were in control just as you’d expect. Dynamic range was a bit limited and so images with vastly different bright, dark regions would end up with lost details in the shadow region. 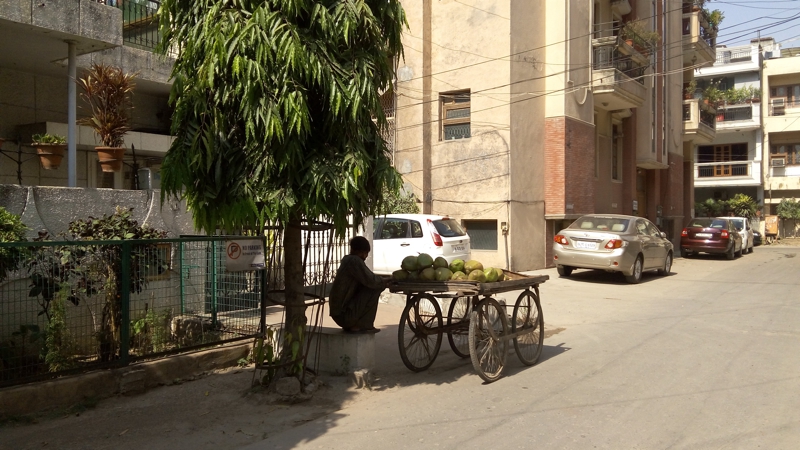 In low light, the f/2.0 aperture meant that the camera managed to take in a fair amount of light. Images weren’t very bright but noise was controlled to the point that images appear clean unless you start pixel peeping. 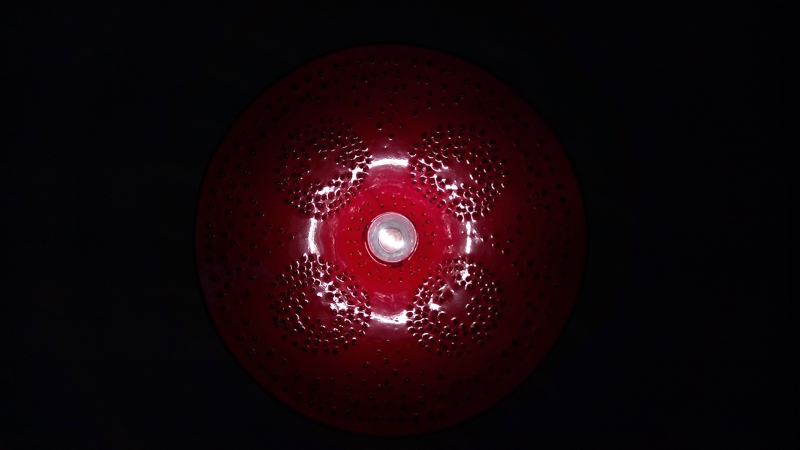 All in all, the camera is serviceable and can take some decent shots but you’d be well served by keeping your expectations in check.

Onboard connectivity on the Coolpad Note 3 includes 4G LTE / 3G HSPA+, Wi-Fi 802.11 b/g/n, Bluetooth 4.0, GPS. In our testing 4G seemed to work only on the first SIM. The phone ships with 16GB of built in storage of which around 10.5GB is available at first boot. You can however expand that via a microSD card and can set that as the default installation location. The phone also supports USB OTG for storage. 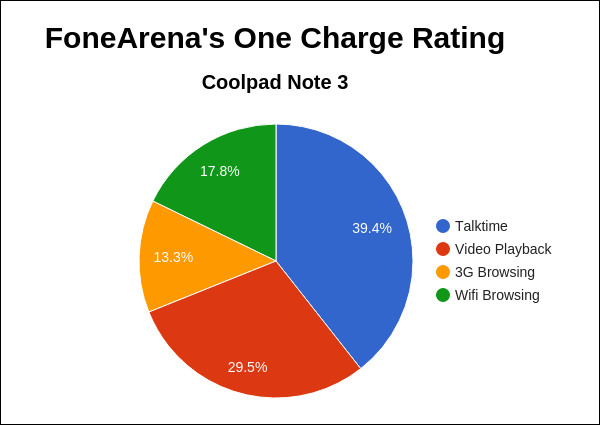 The removable back cover of the phone is strictly for accessing the SIM card and storage slots. The sealed in battery is rated for 3000 mAh and we easily got a full day of usage out of it. In standard testing, we ran a video loop for about 8 hours before the phone gave us a low battery warning. Regular usage got us 12 hours of usage with a lot of phone calls, two active SIM cards, multiple email, twitter and facebook accounts syncing resulting in an average of 5 hours of screen on time. The battery life hence proved to be satisfactory if not exemplary. It achieved a One Charge Rating of 10 hours and 40 minutes. Check out the complete set of battery test results here.

The CoolPad Note 3 enters a crowded market that has many great devices already competing with each other. We found that it managed to keep up with the competition by getting the basics right. The phone does all the essentials well by providing good battery life, decent build quality and an above average camera. Yes, the display does have a lower resolution than some but the quality of the display means that you can overlook that unless you are very particular about having the best display on offer. 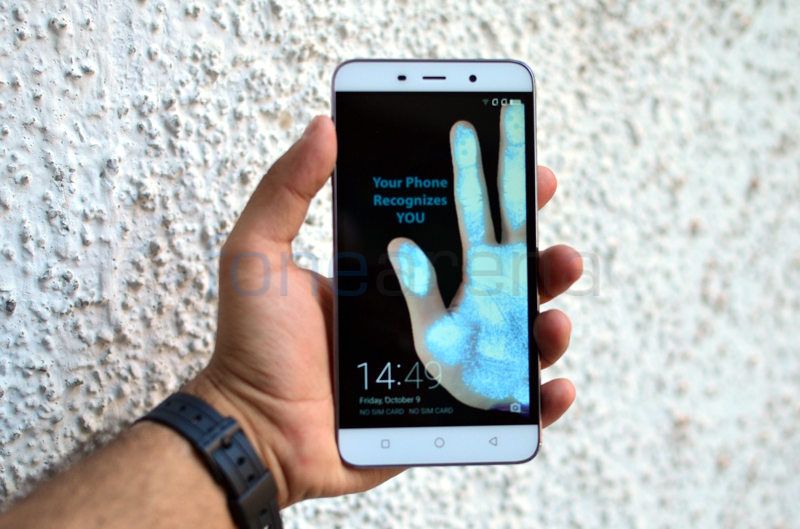 However being competitive alone doesn’t make a product standout, in this regard the built in fingerprint scanner that works exceptionally well, extra RAM that facilitates better multitasking helps. Both the features provide tangible improvement in usability over and above the competition which makes us feel that the Coolpad Note 3 should be near the top of your list of devices to consider when buying a phone under Rs. 10,000.Priced at Rs. 8,999, the Coolpad Note 3 should provide stiff competition to the likes of the Meizu M2 Note, Lenovo K3 Note, Xiaomi Mi4i amongst others.