Microsoft is said to be working on a low cost virtual reality headset that looks like the Google Cardboard competitor that allowed users to enjoy a decent virtual reality experience just with their smartphone. 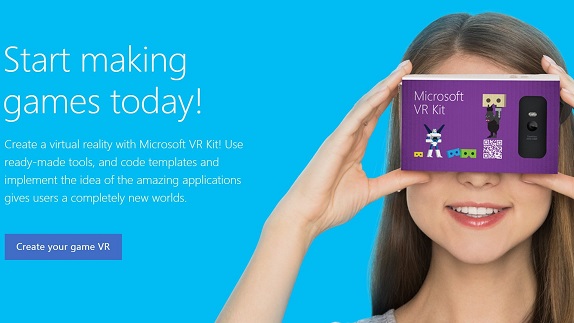 The website for an upcoming hackathon in Russia highlights the Microsoft VR Kit which is a Cardboard-like device that turns a Lumia smartphone into virtual reality headset. Microsoft is inviting developers to participate in the October 17 event to build VR apps for its devices. Participants will get their own cardboard phone holder, and will compete to win prizes for the best VR game, education app, and corporate app. A Kinect scanner will allow people to bring 3D models of themselves into the virtual world.

Similar to the Google Cardboard VR, the VR Kit aims users to get a cheap virtual reality through a cardboard box. Users slide their phone into the box, and view apps that are formatted for viewing through the lenses. The main aim for Microsoft Cardboard looks similar, but the only difference is that instead of Android phone, it has been designed for devices running Microsoft’s Windows Phone.

Microsoft is already working on a high end project HoloLens that is more augmented than virtual reality, with digital scenes overlaid on the real world. Currently there are a handful of VR headsets in the market including Samsung Gear VR, Oculus Rift, Sony Project Morpheus, HTC Vive and others. Microsoft is holding a press event on October 6, where it is expected to announce new Lumia smartphones, the Surface Pro 4 tablet, and a new Microsoft Band wearable.