Apple announced the watchOS 2 at the WWDC back in June. At the iPhone event earlier this month, Apple said that it will release watchOS 2 on September 16th, along with the iOS 9, but it got delayed due to bugs that was discovered at the last moment. Now it has rolled out the update for the Apple Watch that brings new features such as native support for third-party apps such as News, Weather, Facebook Messenger, GoPro with viewfinder support on Watch, new ‘Time Travel’ feature lets you rotate the digital crown to move forward or backwards in your appointments, Transit option in maps for finding public transportation and several improvements. 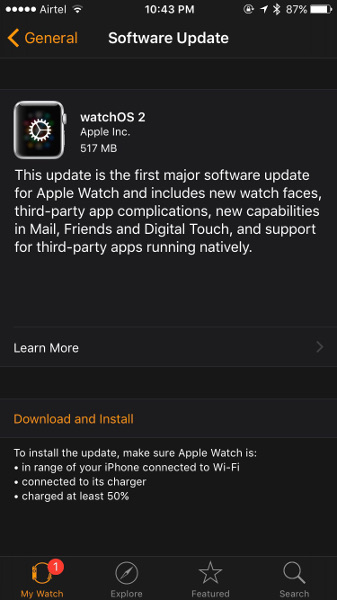 You can update to watchOS 2 by opening Apple Watch app on your iPhone and going to My Watch > General > Software Update. Check out the complete changelog below.