Global wearable device shipments will reach 76.1 million units in 2015, up 163.6% from the 28.9 million units shipped in 2014, as per the latest report from International Data Corporation (IDC) Worldwide Quarterly Wearable Device Tracker 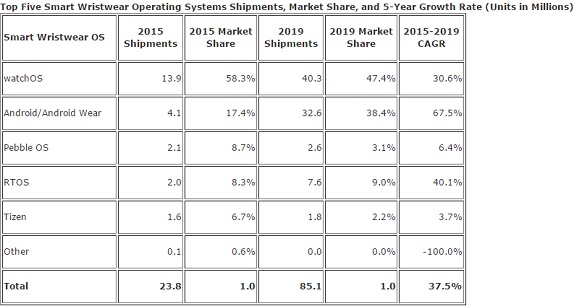 The report cited factors such as growing list of vendors, proliferation of devices, experiences, price points, and steady consumer adoption that will fuel growth in the worldwide market for wearable devices. By 2019, worldwide shipments will reach 173.4 million units, resulting in a five-year compound annual growth rate (CAGR) of 22.9%, added the report. Total shipments include both basic and smart wearables, which are two very different product categories in many aspects.

“Smart wearables only account for about a third of the total market today while basic wearables, led by fitness trackers, account for the rest. Driven by advancements in user interface (UI) and features, smart wearables are on track to surpass the lower priced, less functional basic wearable category in 2018. Smart wearables will quickly move from a smartphone accessory primarily focused on notifications to a more advanced wearable computer capable of doing more processing on its own.” 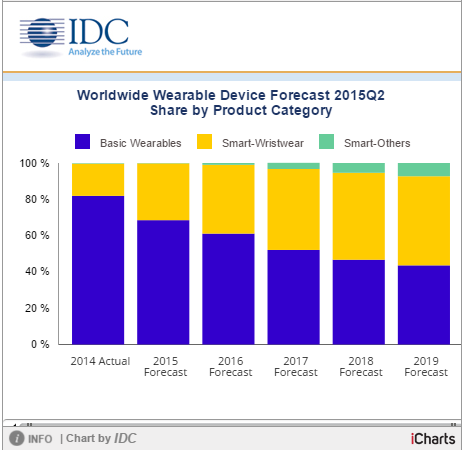 IDS says that smart wristwear, including watches and bands such as Apple Watch, Motorola’s Moto 360, Samsung’s Gear S-series, and Pebble’s Time that are capable of running third-party applications are driving the wearables market. Forecasting about different wearable OS, IDC said that Apple’s watchOS which is in its first year on the market and will quickly establish itself as the overall leader in the smart wristwear market and maintain its position throughout our forecast. IDC expects second and third generations of the Apple Watch will drive shipment volumes later in the forecast. In Q2, 2015 Apple became the second largest wearable maker in the world.

On the other hand, Android Wear is expected to market-beating growth, with a combination of consumer electronics heavyweights and an expanding list of watchmaker brands also expected to launch their own smart watches in the years to come. The research firm stated that broader and deeper selection of Android Wear devices at multiple price points will appeal to a wide audience. IDC touted Tizen has a dark-horse platform in the market. With Samsung opening up the Tizen SDK and making its Gear S2 and subsequent devices compatible with flagship smartphones from other Android OEMs, the total available market for Samsung has opened up significantly.