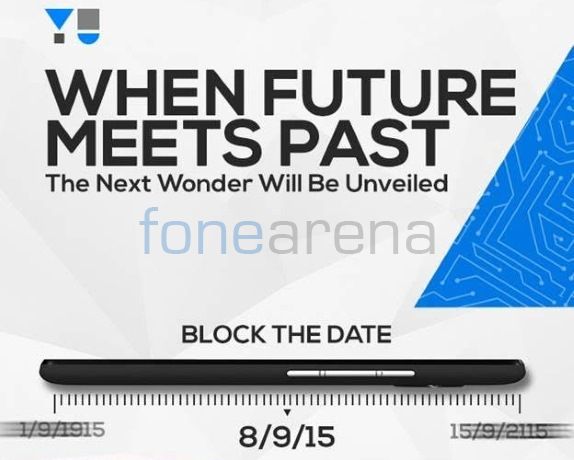 Micromax’s YU Televentures is all set to launch a new affordable smartphone in its portfolio next week on September 8.

YU sent out media invites of the launch date hinting the smartphone to be the ‘Next Wonder’. While company didn’t say anything about its name, our speculation is that it might get dubbed the YU Wonder, just going by what the company had named previous YU smartphones – YU Yureka and YU Yuphoria.

The text in YU’s invite reads, “When Future Meets Past – The Next Wonder Will Be Unveiled.”

Also, the new YU smartphone might just be an exclusive online launch on Snapdeal, unlike previous devices launched in partnership with Amazon. Though this needs to be seen on the day of launch itself, but considering YU’s Co-Founder and CEO, Rahul Sharma’s Twitter conversation with Kunal Bahl, Co-Founder & CEO, Snapdeal, it is more or less confirmed.

Other than that it is possible that YU may also launch its first power bank that was spotted in a listing by Indian importer Zauba. YU recently imported 5000 units of its 10000mAh power bank codenamed YUAPB1000 from China to India on August 19th. The power bank is expected to come with a catchy name, similar to the YU series smartphones.