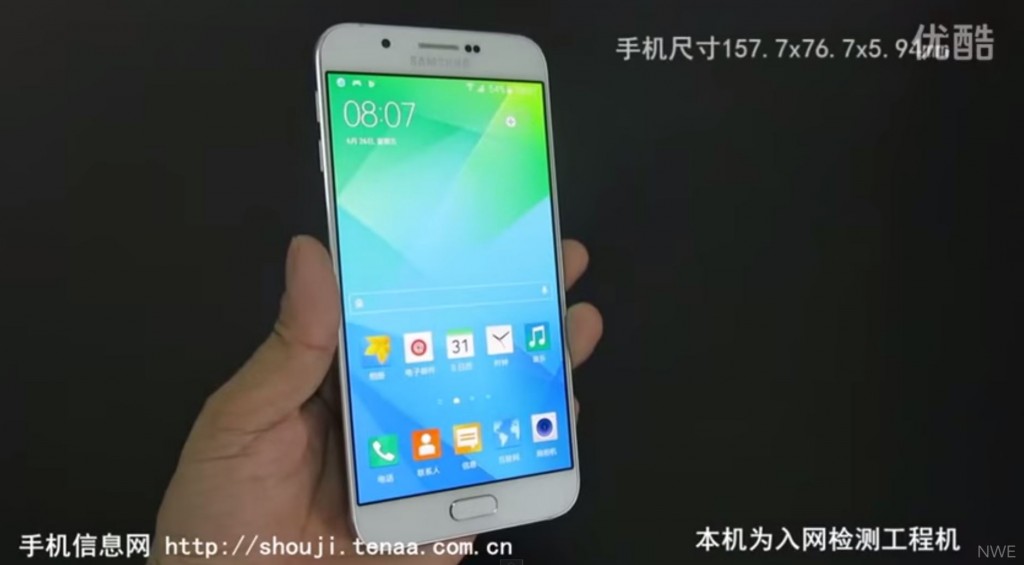 The Samsung Galaxy A8 has been hot in the news since the very first rumour about its existence began circulating. Recently, live images of the smartphone surfaced followed by a certification of the device in China. Now we have a full fledged hands-on video of the Galaxy A8 to see the handset in full detail.

The video can be seen here, but there is no audio to go along with it. However since it is in Chinese, it might’ve been difficult to understand anyway. There are specifications that appear throughout the video in the form of text most of which is easy to understand tech lingo.

The Galaxy A8 has a more rounded design compared to the previous A3, A5 and A7 smartphones. All of them did have rounded corners but the devices were in fact mostly rectangular. The device will have a 5.7″ 1080p Super AMOLED display with an octa-core Snapdragon 615 processor and 2GB of RAM. There’s a 16 Megapixel camera at the back and a front facing 5 Megapixel camera. There’s 16GB of internal memory and a 3050 mAH battery powering the device. It also has a fingerprint sensor in the home button and all of these are housed in a body that is just 5.9mm thin. The device will run on Android Lollipop 5.1.1 out of the box and we should see an announcement from Samsung sometime in the near future.