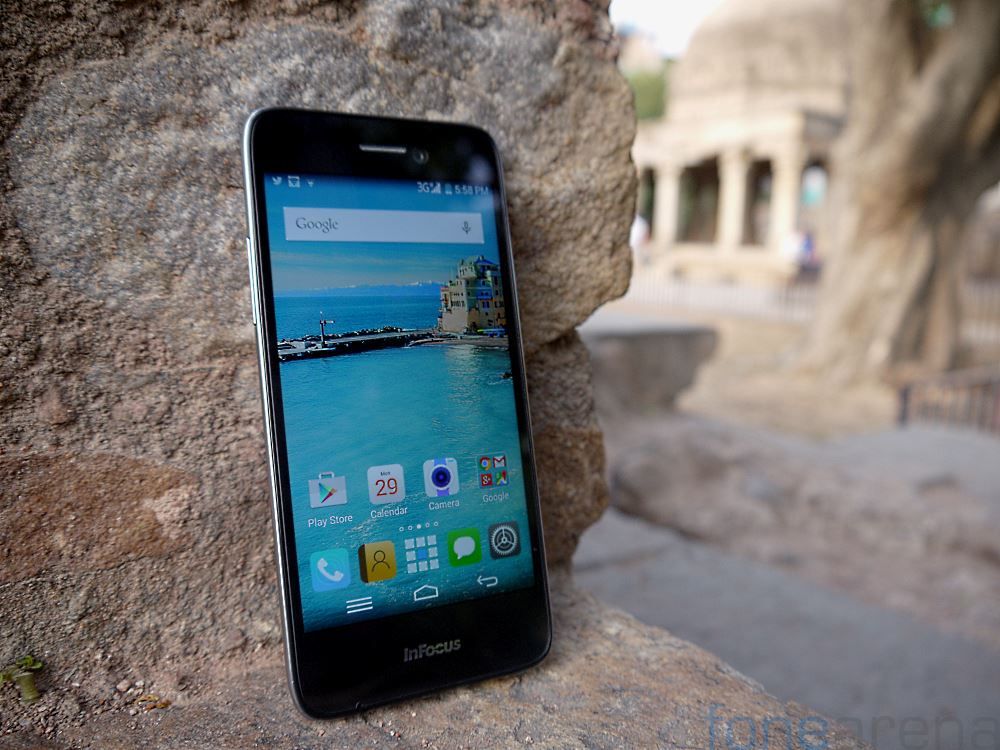 InFocus recently launched two smartphones in India – the InFocus M350 and InFocus M530 priced at Rs. 7,999 and Rs.10,999 respectively. If you are thinking it as another Chinese brand, we would like to tell you that it is an American company that’s making smartphones since 2013, but the smartphones are manufactured in China.

The company was originally founded in 1986. In 2013, it began offering budget high-specification smartphones in partnership with the Foxconn in China, which also manufactures for Apple. So it is relatively new brand for smartphone market worldwide.

The InFocus M350 has got a decent build for the price with it’s all plastic body, plastic chassis and a shiny steel finished metal rim around the display. 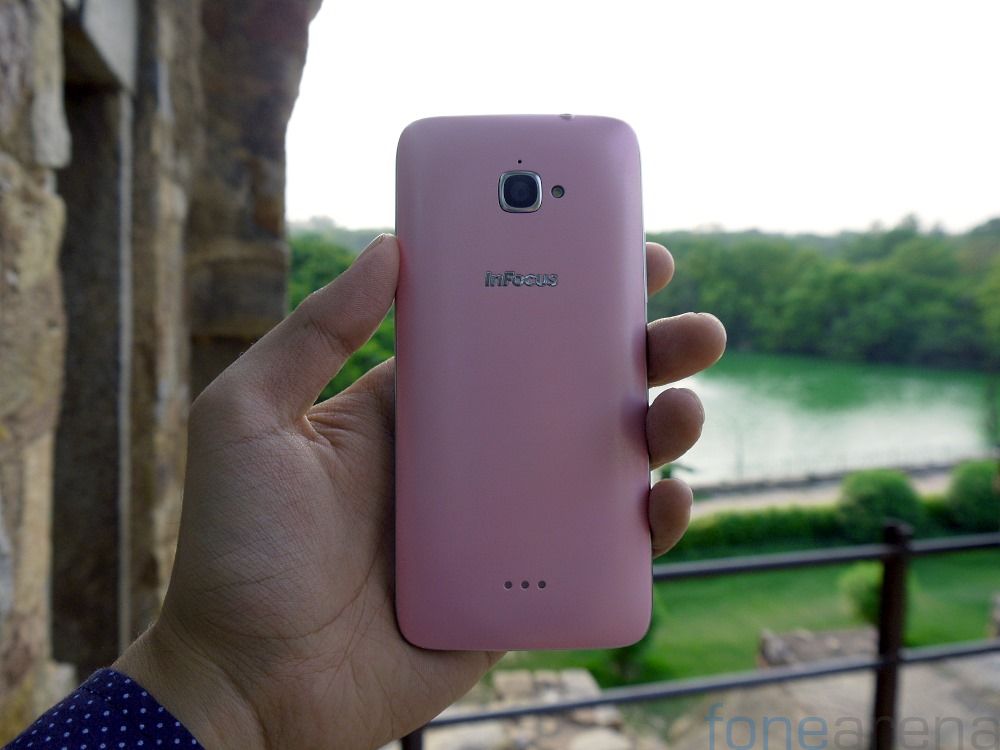 The front of the smartphone is all Black and packs a 5-inch 720p display with huge bezels on top and bottom, which we really didn’t like at all. As a result of this, the phone is much taller as it could have been. This is one of the design flaws that you will dislike the most, though the display is pretty neat.

The three capacitive touch buttons sit within the display (on-screen), which also make the screen look even smaller on this tall device. Huge bezel below the display gets the InFocus branding and nothing more. 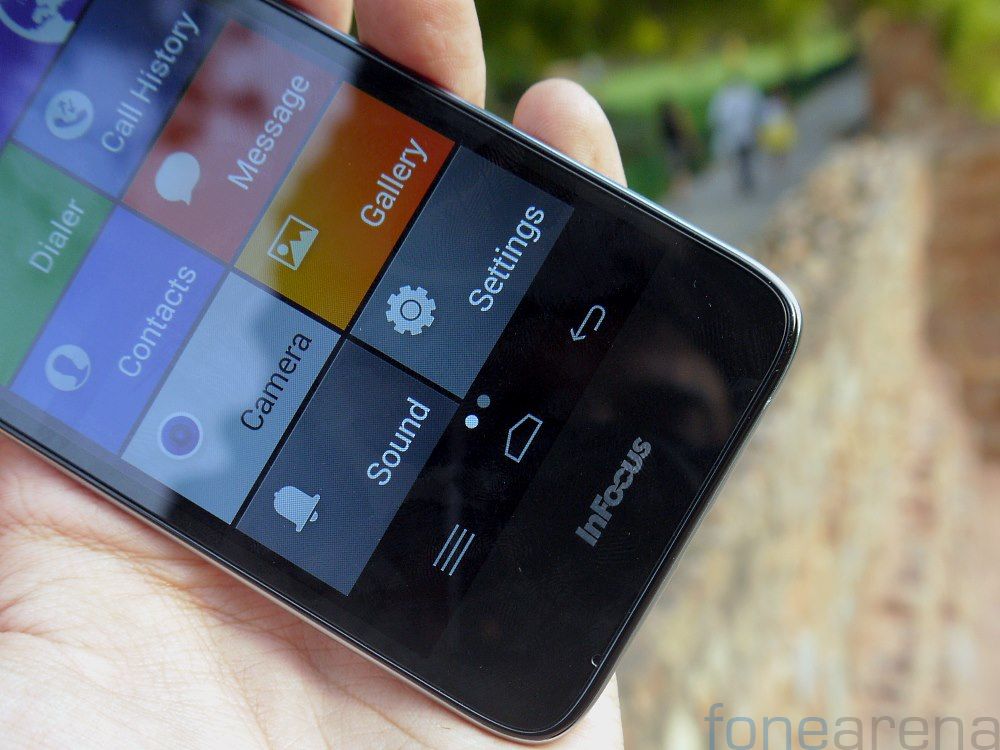 The top of the smartphone sports an 8-megapixel front facing camera, along with ear piece grill, proximity sensor, light sensor and a tiny coloured-LED notification light – which can be only be seen when you have a notification to be acknowledged.

Right side of the InFocus M350 features power/ lock key, and left houses volume rocker on the steel finished metal rim around the display. Tactile feedback on both is pretty good. 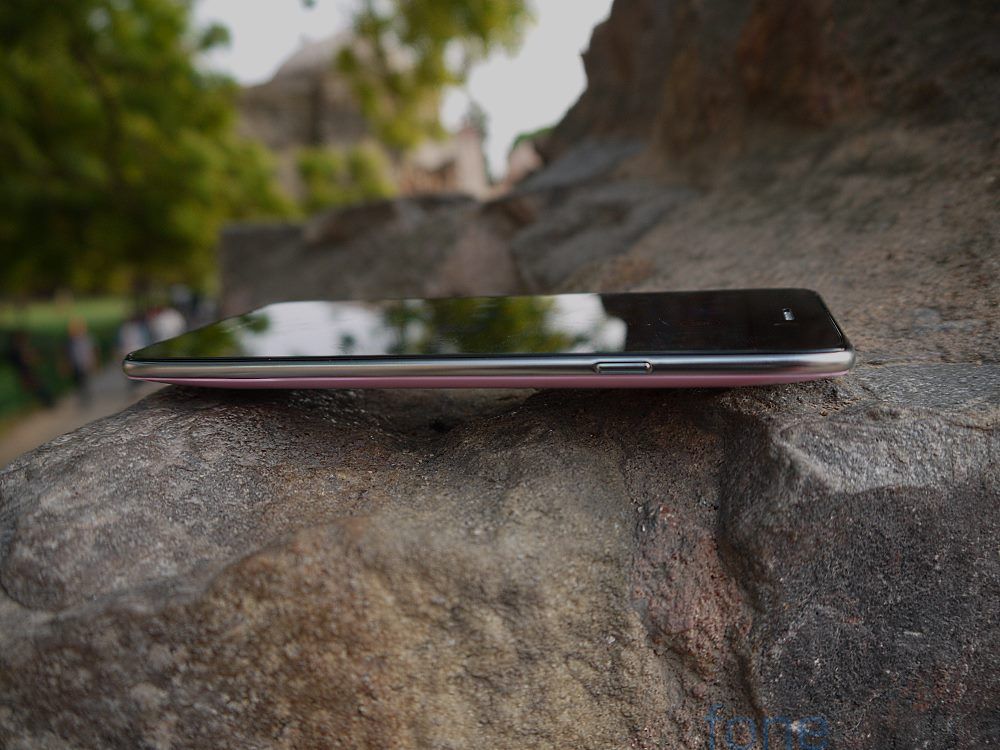 On the top of the handset is the 3.5mm audio jack and the bottom locates the Micro-USB charging/ data port. 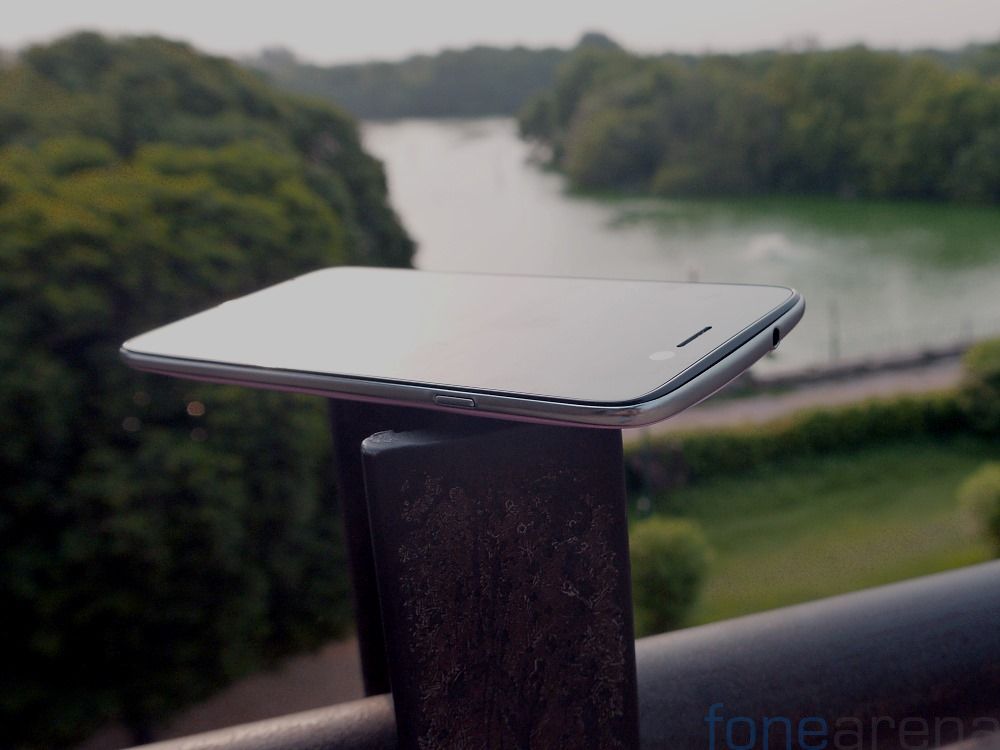 Back of the M350 features camera module placed in center with an LED flash and a noise cancellation mic right on top of it. You’ll find shiny steel finished InFocus branding engraved just below the camera. At the bottom, there are three pin holes for the speaker grill.

The back is nicely curved and provides a solid grip. It is removable and made out of soft plastic with matte finish, so it doesn’t attract smudges or fingerprints. The microSD card slot and two Micro-SIM card slots are placed underneath the removable back cover. The 2500mAh battery on the InFocus M350 is non-removable. 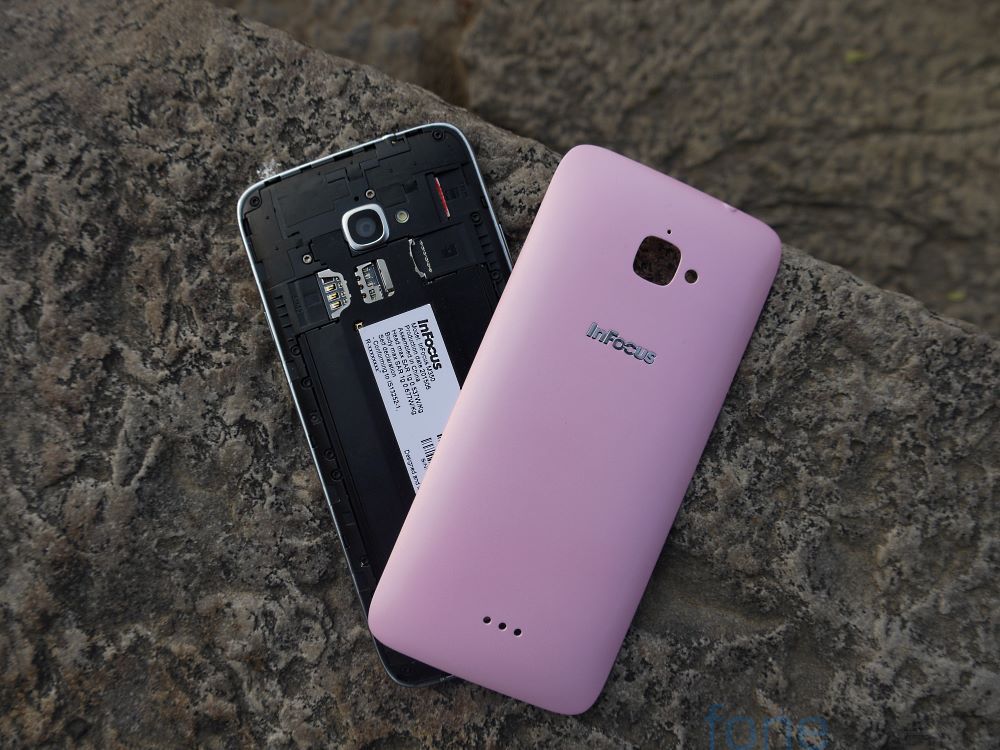 Overall, the company has done a good job with the build of InFocus M350, but the design isn’t something that you will go crazy about. In fact, it looked more outdated to us.

The InFocus M350 comes with a 5-inch HD (720×1280 pixels) IPS display with On-cell display technology and offers a pixel density of 294ppi. We quite liked the display for its good contrast ratio and it is well saturated too. 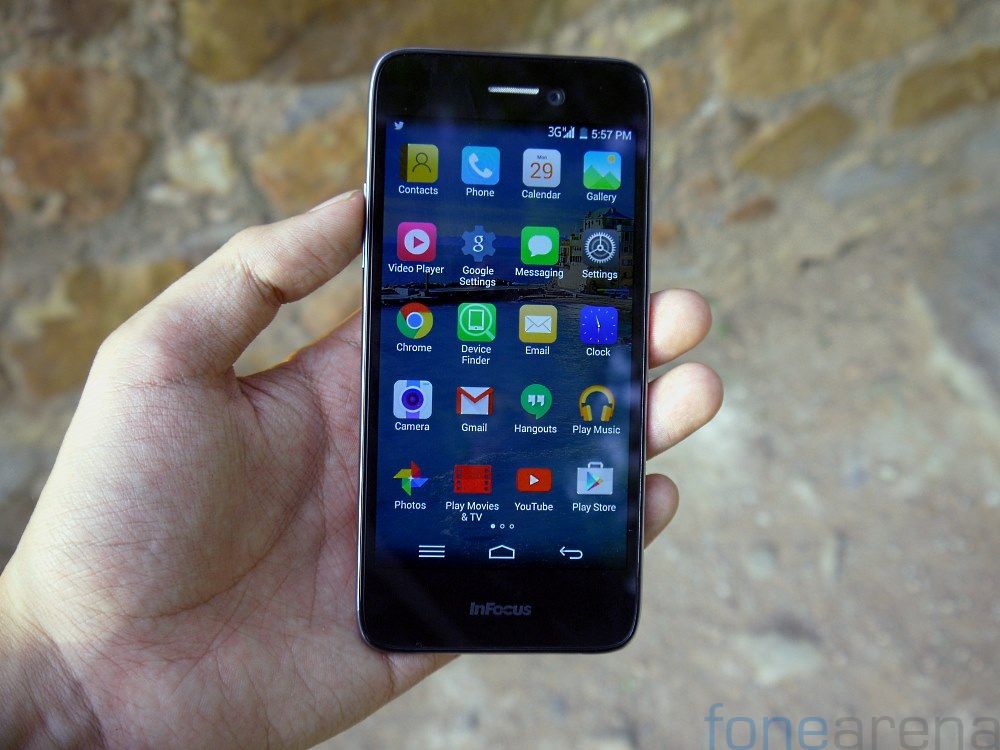 The anti-smudge coating on it works well and doesn’t attract many fingerprints. Screen brightness, sunlight legibility and viewing angles are fine as well, but yes you will find a little difficulty under the direct sunlight. You also get couple of settings to tweak around – like the Bluelight Filter and Color Temperature. 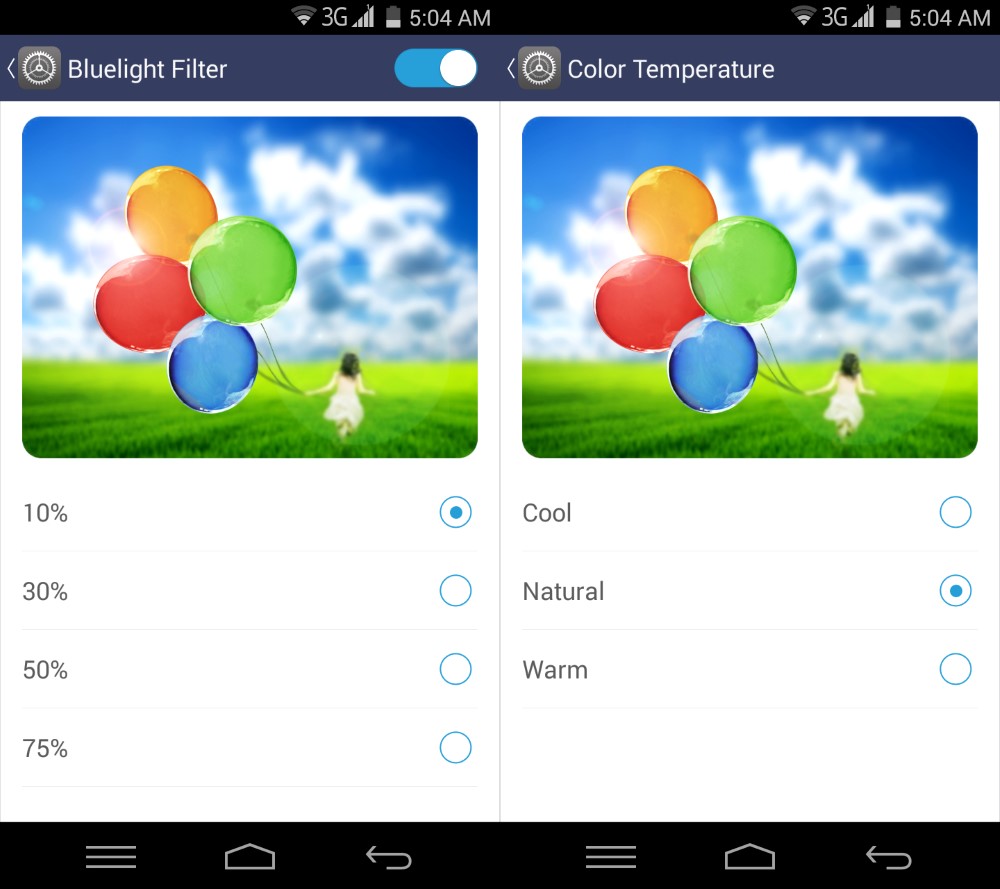 Overall, we found the display performance to be satisfactory. It didn’t get many scratches during our review, but we would still suggest you to keep a screen protector on.

Talking about the performance, the InFocus M350 packs a 1.5GHz quad-core MediaTek MT6732 processor with Mali-T760 GPU and 2GB of RAM. 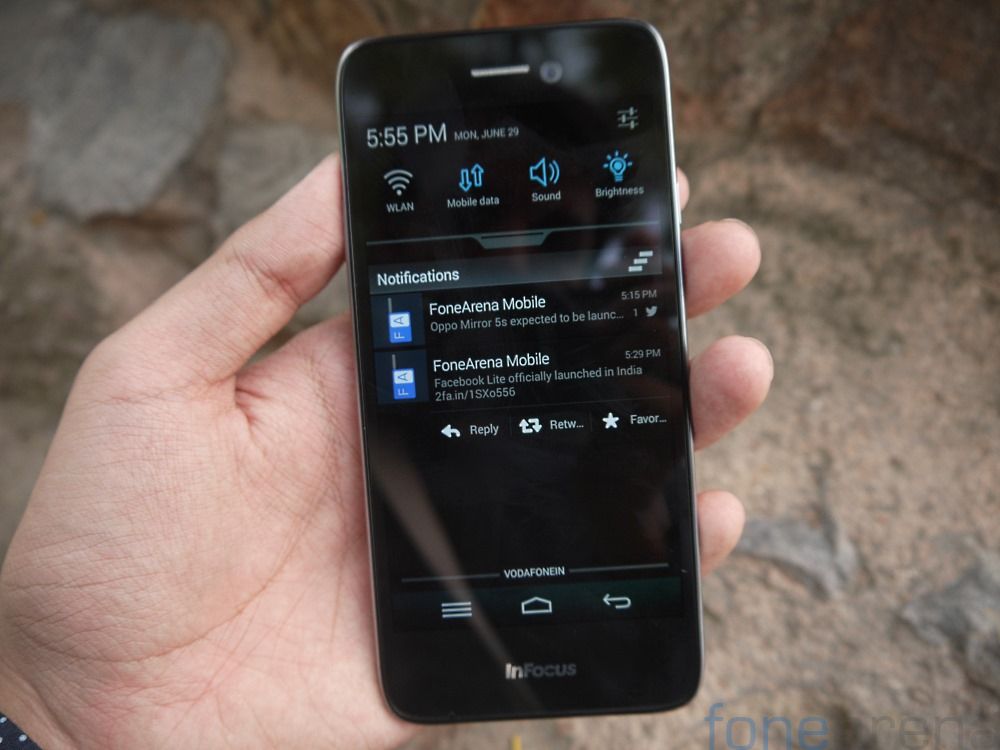 The device isn’t snappy like the Lenovo A6000 or the Yu Yureka, but it will do a fair job for an average user. You get about a little over 1GB of free RAM that lets you run several apps in the background without any problem. But one annoying thing that kept bugging us time to time was the notification to free some memory on the device, even though there were not many apps running in the background. We are not sure if that was the case with just our device or is for all.

Also, the phone gets a little warm when you are multitasking, watching videos, playing games or even charging the battery. It felt a little uncomfortable initially, but the temperature doesn’t raise too much. 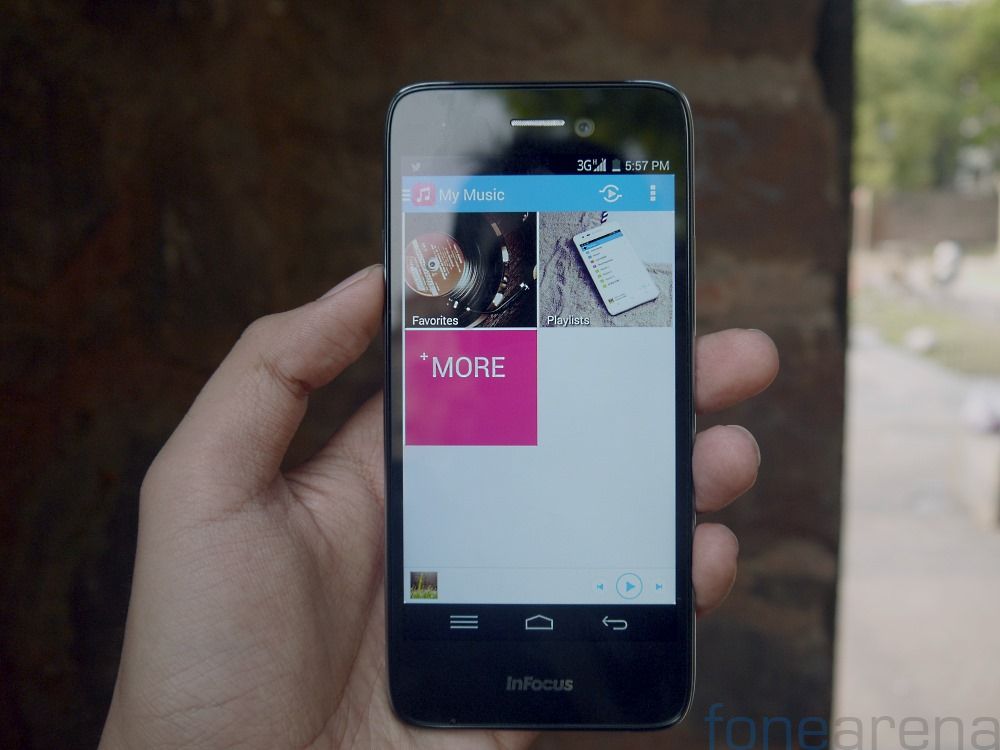 Talking about the gaming performance and audio/ video playback, the InFocus M350 did a decent job in all departments. Games like Subway Surfer, Temple Run ran smoothly without any trouble and audio output was sufficiently loud as well. The videos also played very nicely, including playback through OTG. Audio output in headphones was quite impressive too. It was loud enough and the quality was decent. Just to note here, we didn’t get the standard pair of headphones for the review, so we only used ours. Additionally, the InFocus M350 includes FM Radio and USB OTG (on-the-go) support as well.

The device runs on Android 4.4.4 KitKat with company’s InLife UI skinned on top. We don’t know if the company will update it ever to Android 5.0 Lollipop, but it seems less likely. Yes, the software is dated but so as the case with the competition – Xiaomi Redmi Note 4G and Lenovo A6000 Plus, though the latter is expected to receive the update soon.

The InLife UI icon design looks a little like the iOS icons, but that’s about it. You can keep the homescreen as one single layer like the most Chinese UI without app drawer, or two layers like stock Android with app drawer. 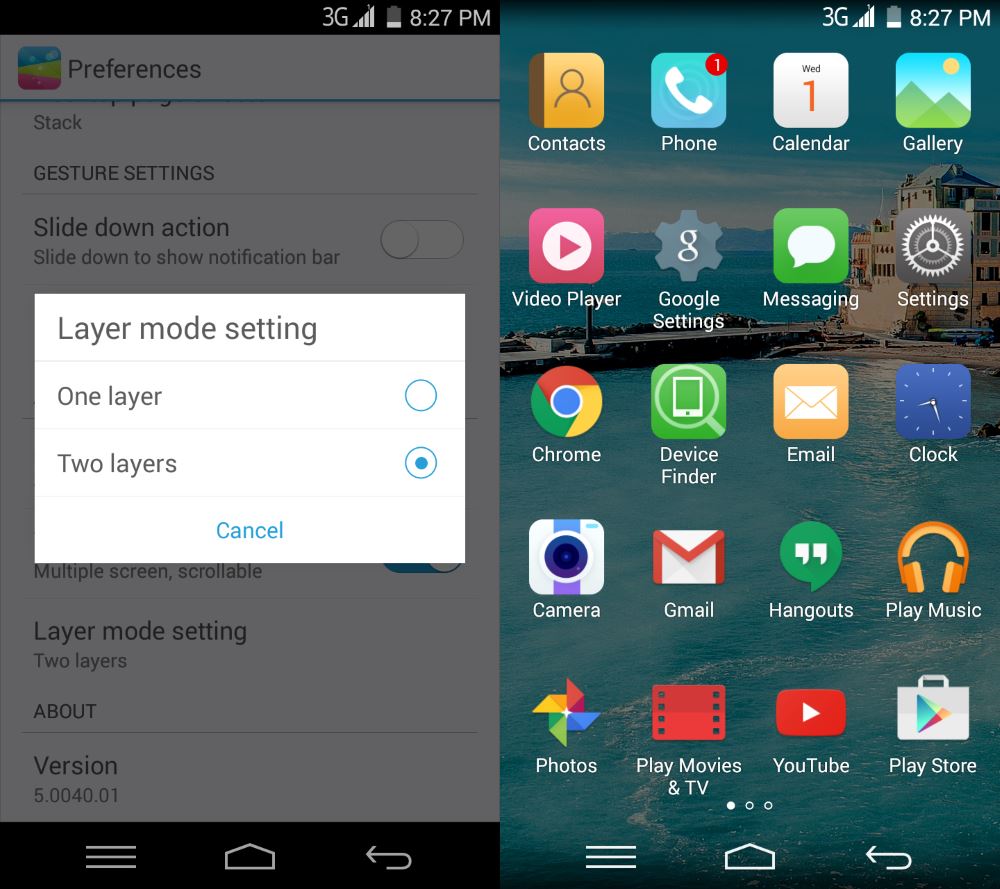 There is one EZ UI launcher as well, which is similar to Huawei’s Emotion UI lite launcher. This will essentially consume less power. 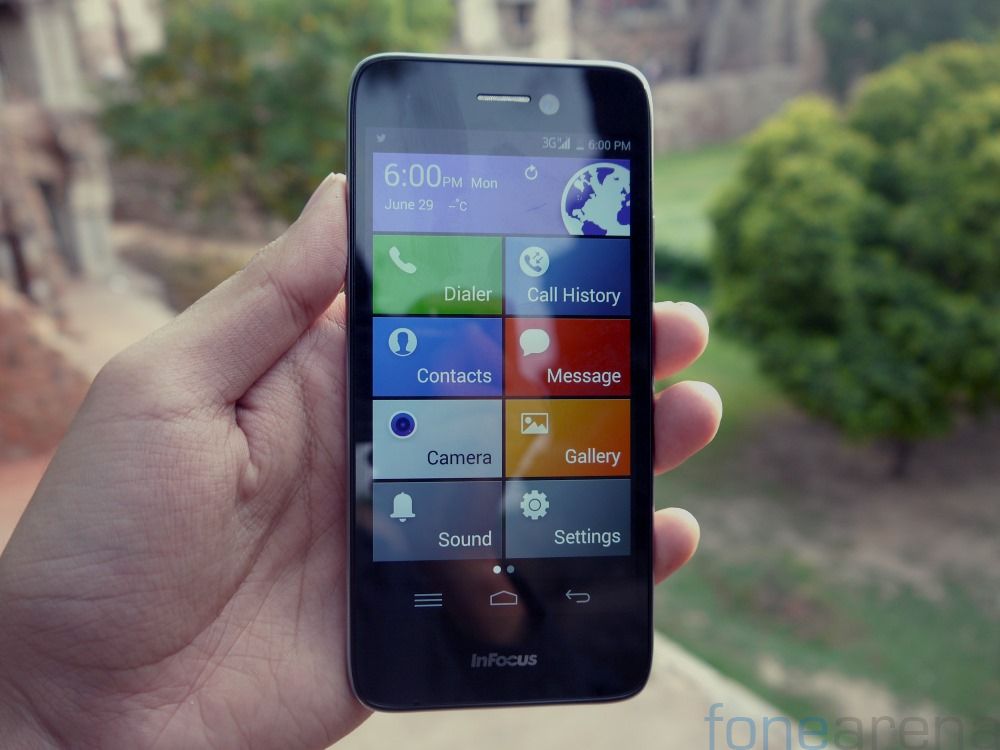 One good thing about the InLife UI is that it doesn’t come with too many pre-loaded apps out-of-the-box, so you get approximately 12GB (11.95GB) of free space out of 16GB storage. You also have an option to expand storage up to 64GB and can move apps to the SD card as well. 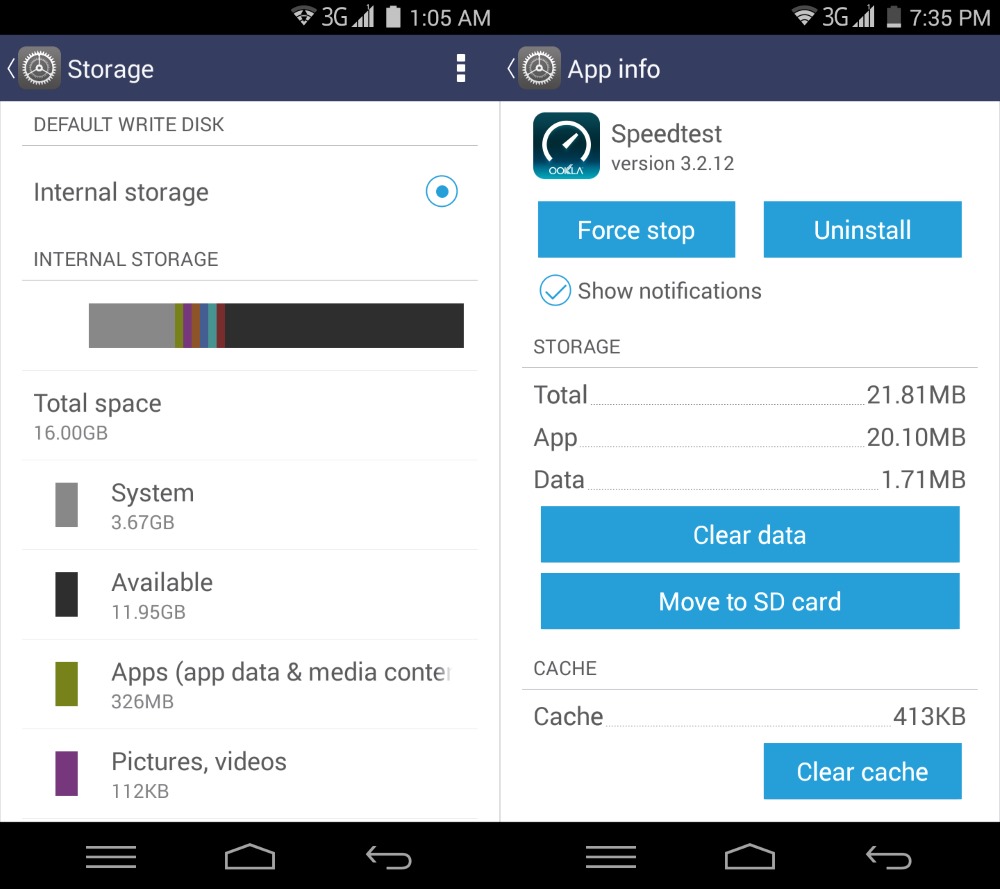 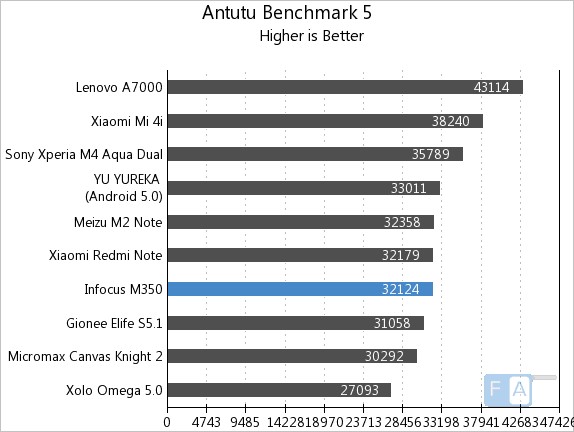 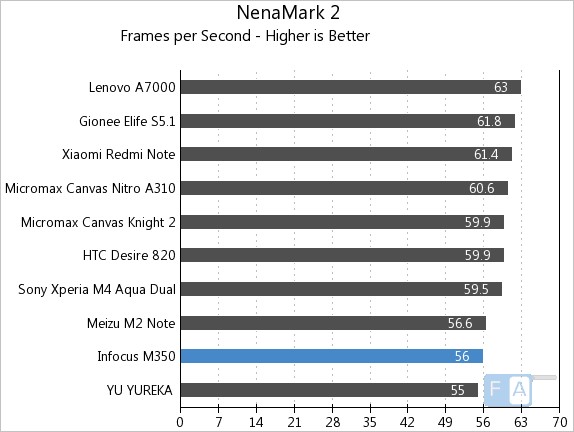 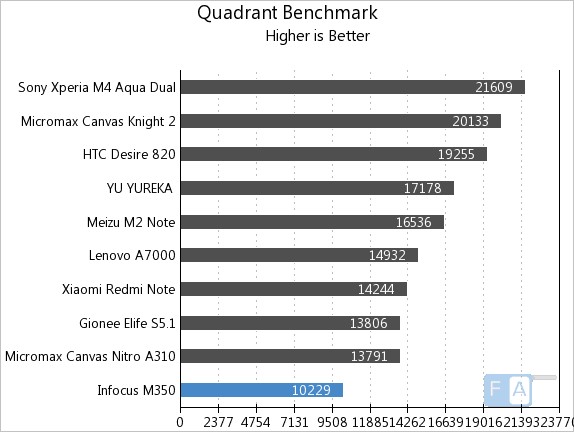 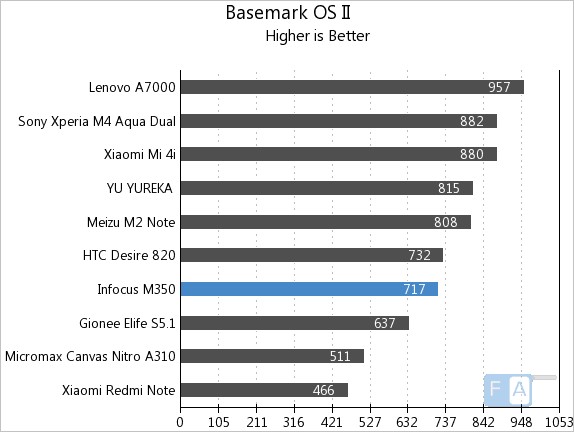 The InFocus M350 packs an 8-megapixel auto focus rear camera with BSI sensor, LED Flash and f/2.2 aperture. It’s not even an average performer and shots taken from it were either underexposed or overexposed. The images taken in daylight in ‘Normal mode’ were mostly inconsistent, but sometimes HDR shots came out surprisingly nice.

Image capturing, tap to focus, and auto-focus speed lags quite a bit. You don’t get many custom setting options as well. Low-light photography is terrible, and images had a lot of noise. The front 8-megapixel shooter didn’t live up to its expectations either and was just about okay. This too could not manage consistent shots.

Even the video quality isn’t good at all. The 720p video shot from the rear camera with best optimized settings looked fine on the smartphone’s display, but failed when transferred on to a PC. Check the video sample below. 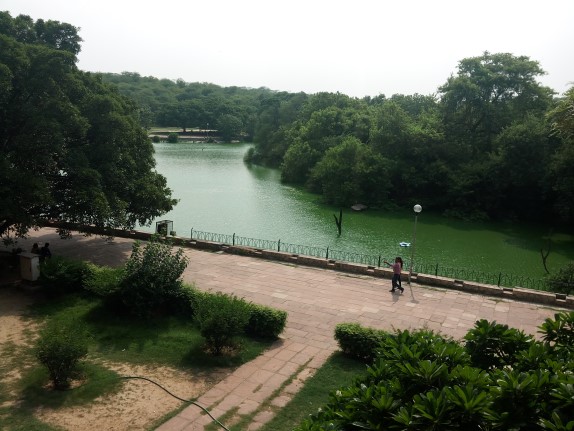 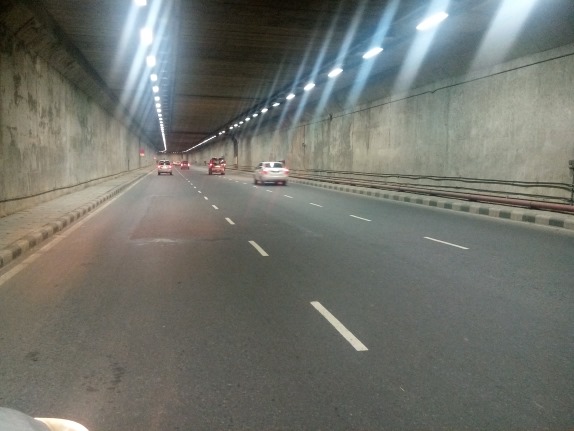 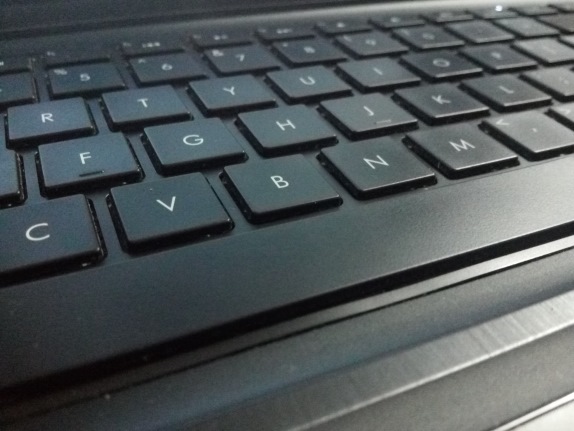 The InFocus M350 can accommodate two Micro-SIM cards with one slot for 4G LTE connectivity and other supports 2G. These can be found beneath the removable back panel along with microSD card slot. 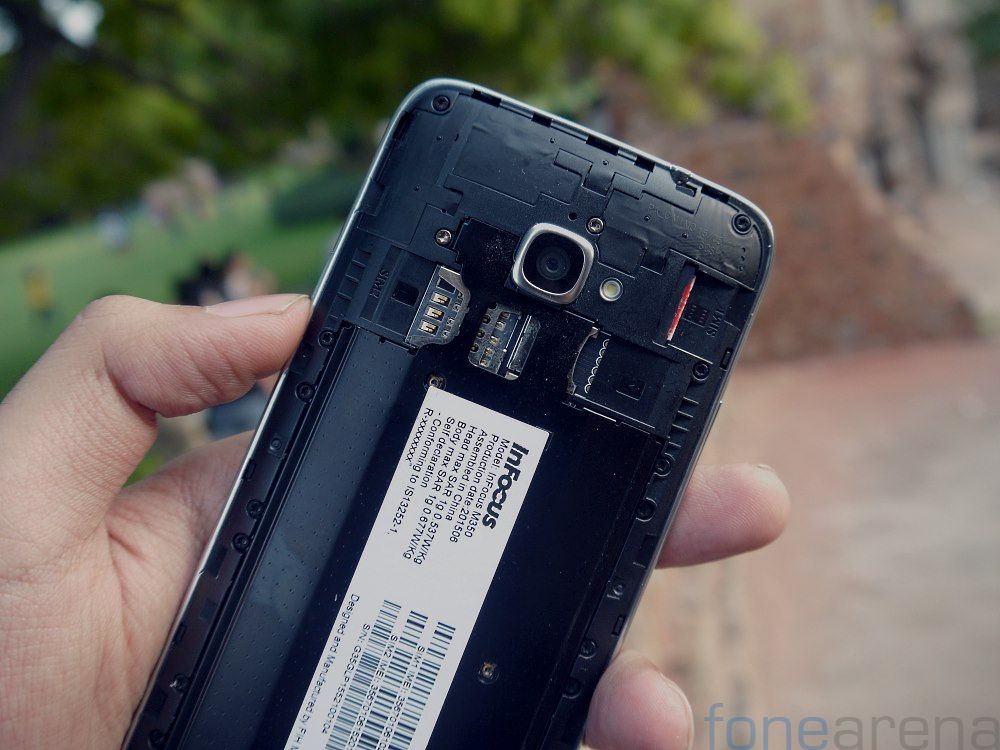 The 2500mAh non-removable battery with single-SIM on 3G and average usage easily lasted for almost 18 hours. So an average user with both the SIM cards on should at least get about 10-12 hours of backup with the InFocus M350.

In our opinion, InFocus M350 isn’t the one that you should consider as your first choice. There are some good things about the device, but considering that you can get more from several other devices in the same price bracket, we would recommend you to check those first. Devices like Lenovo A6000 Plus, Xiaomi Redmi Note 4G, YU Yureka and Lenovo A7000 are definitely a better bet than the InFocus M350. You can read our detailed review about those devices to make a wise purchase. Also checkout our buyer’s guide – Top 10 Android Smartphones under Rs. 10,000.