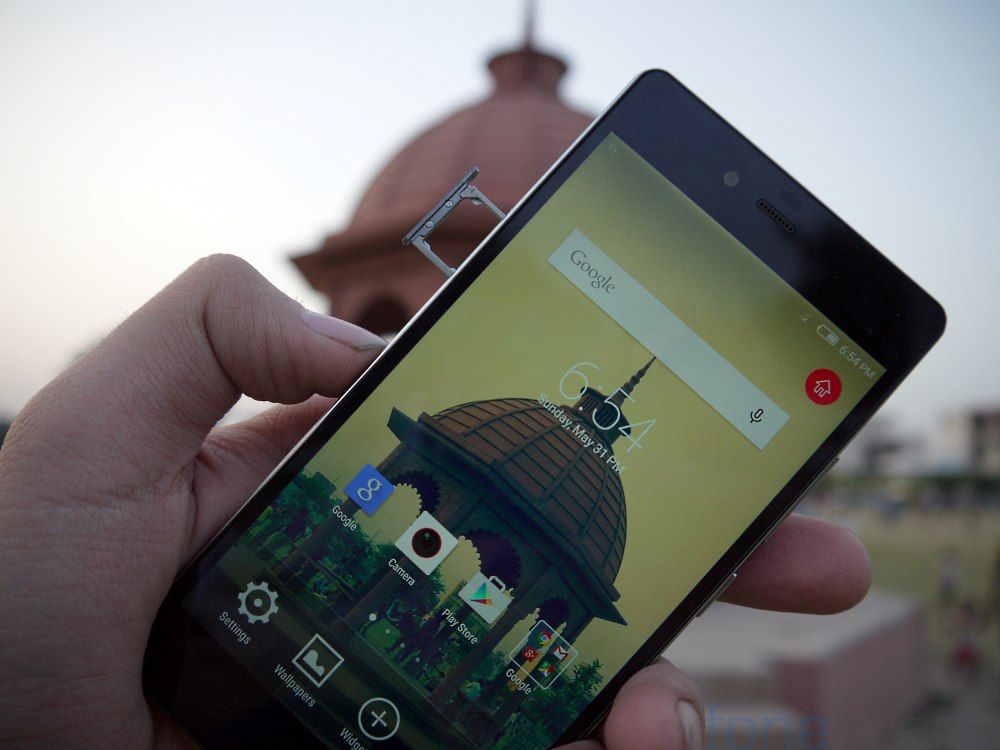 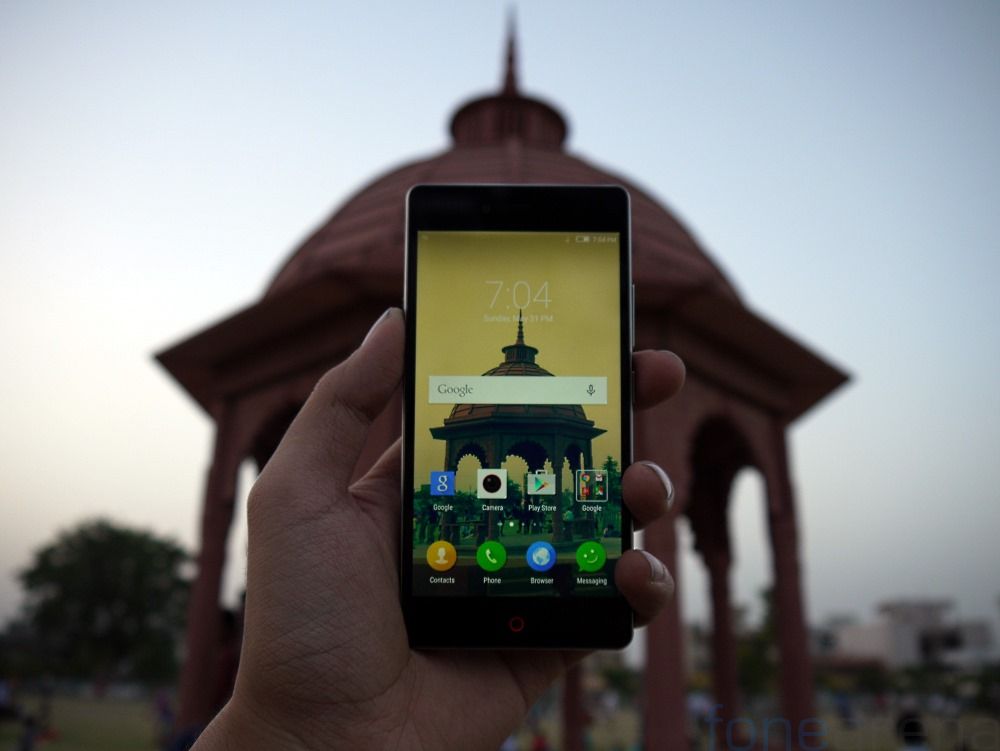 Couple of weeks back on May 19, ZTE got its Nubia series of smartphone in India as a separate sub-brand. The Chinese firm launched Nubia Z9 mini under its Nubia brand for Rs. 16,999. We really liked the device at first glance, but were disappointed with the price. Checkout what we found about Z9 mini in our detailed review? 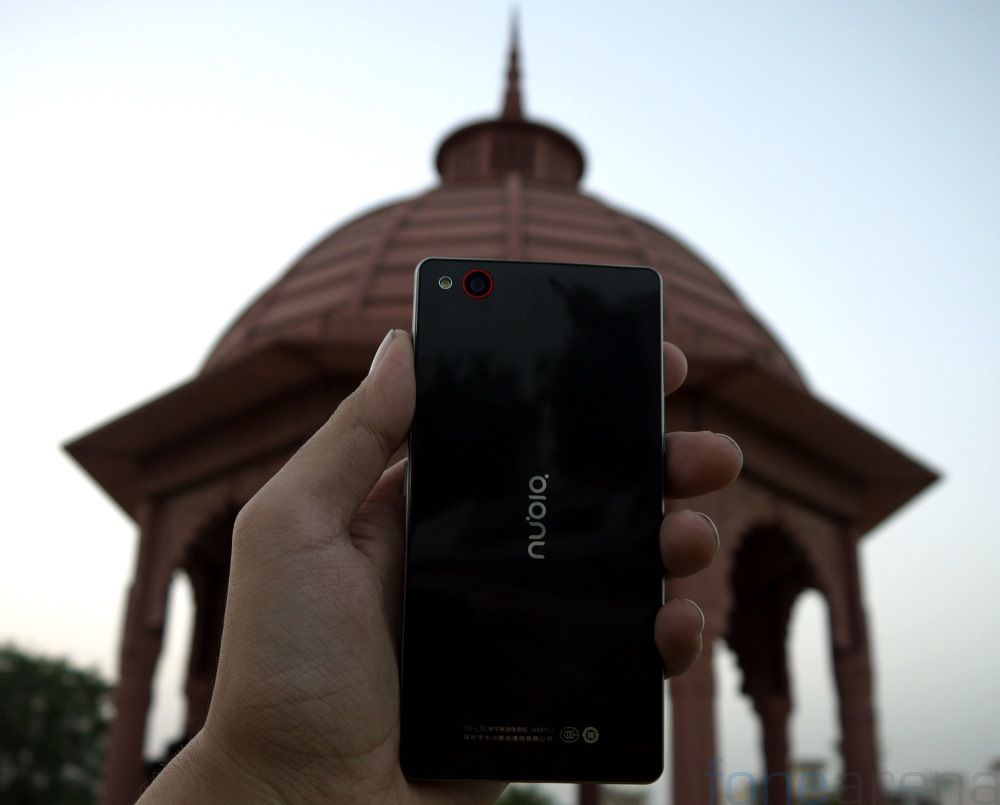 The Nubia Z9 mini is a premium looking device that uses aircraft grade aluminum alloy frame. The design language seems heavily inspired from Sony’s Xperia Z series of smartphones. While the front of Z9 mini features a beautiful 5-inch full-HD OGS display with Corning Gorilla Glass 3 protection, the back also flaunts glass finish, but it isn’t glass. It has been made of soft flexible plastic and is removable too.

The Z9 mini fits well in hands and gives a strong grip with its little curved metal sides. The thickness of the device is 8.1mm and weighs 145 grams. 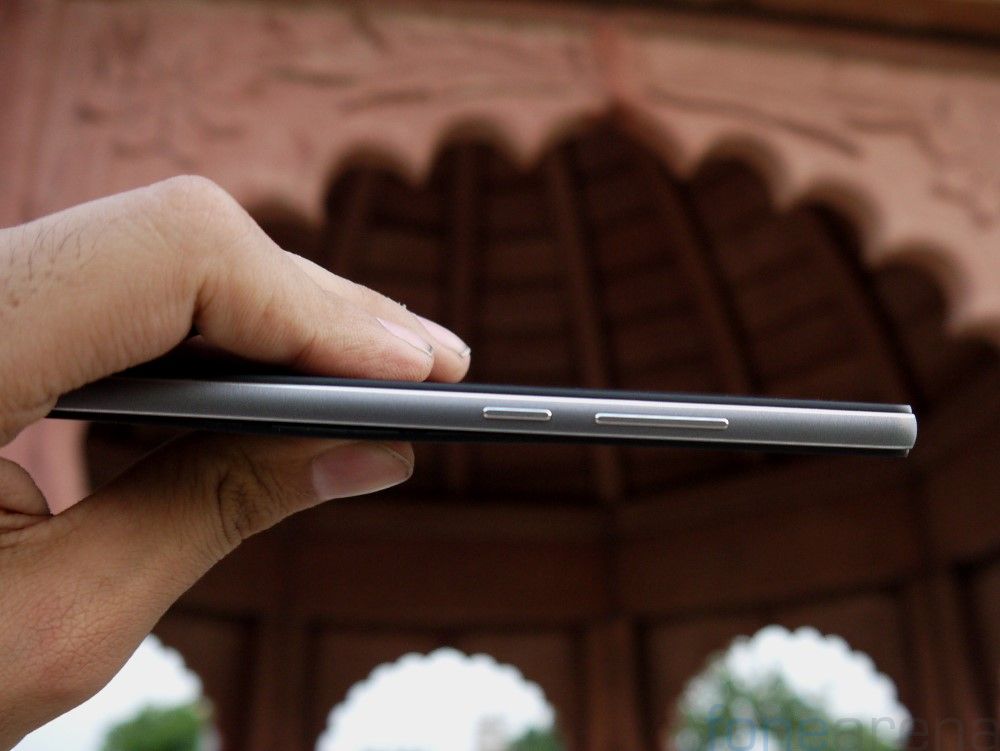 The three capacitive touch buttons sits below the display. Right side of the smartphone includes volume rocker key and power/ lock key. The left edge only features dual Nano-SIM tray. The 3.5mm headphones jack and the secondary noise cancellation mic sit at the top edge. The speaker grill, primary mic and Micro-USB charging/ data port is located at the bottom edge. 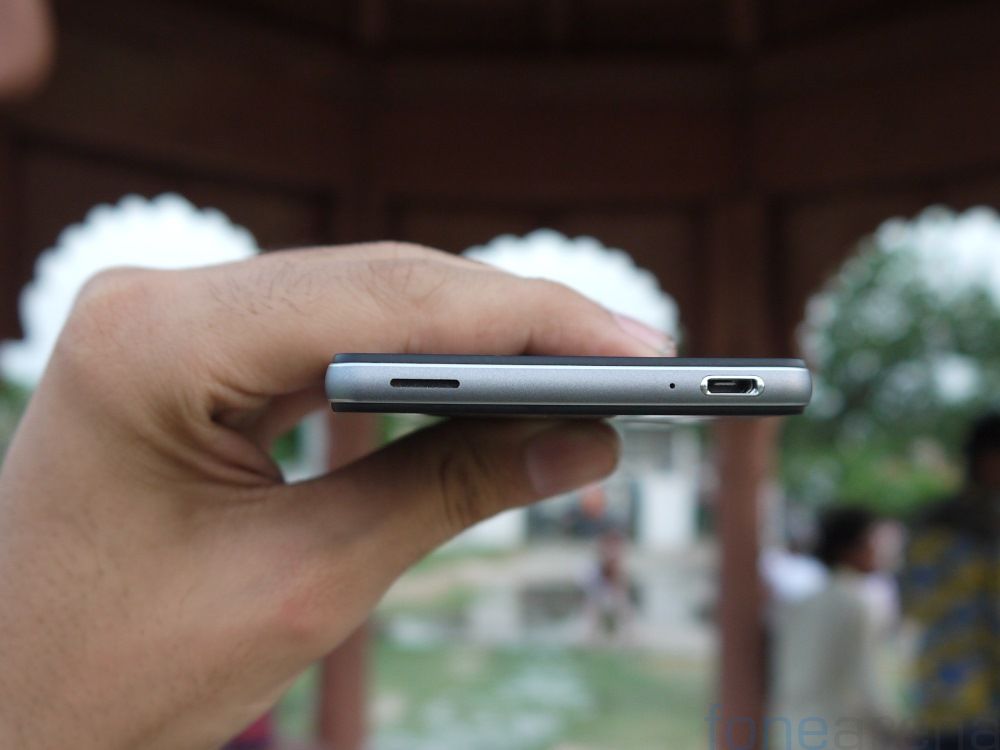 Upfront, the Nubia Z9 mini packs a sharp and impressive 5-inch full-HD (1080×1920 pixels) OGS display with pixel density of 441ppi, though the colours look a bit over saturated. To compensate this, company has put in few software tweaks for managing colour Saturation (Glow, Standard and Soft) and Hue (Cool tone, Natural, and Warm tone). 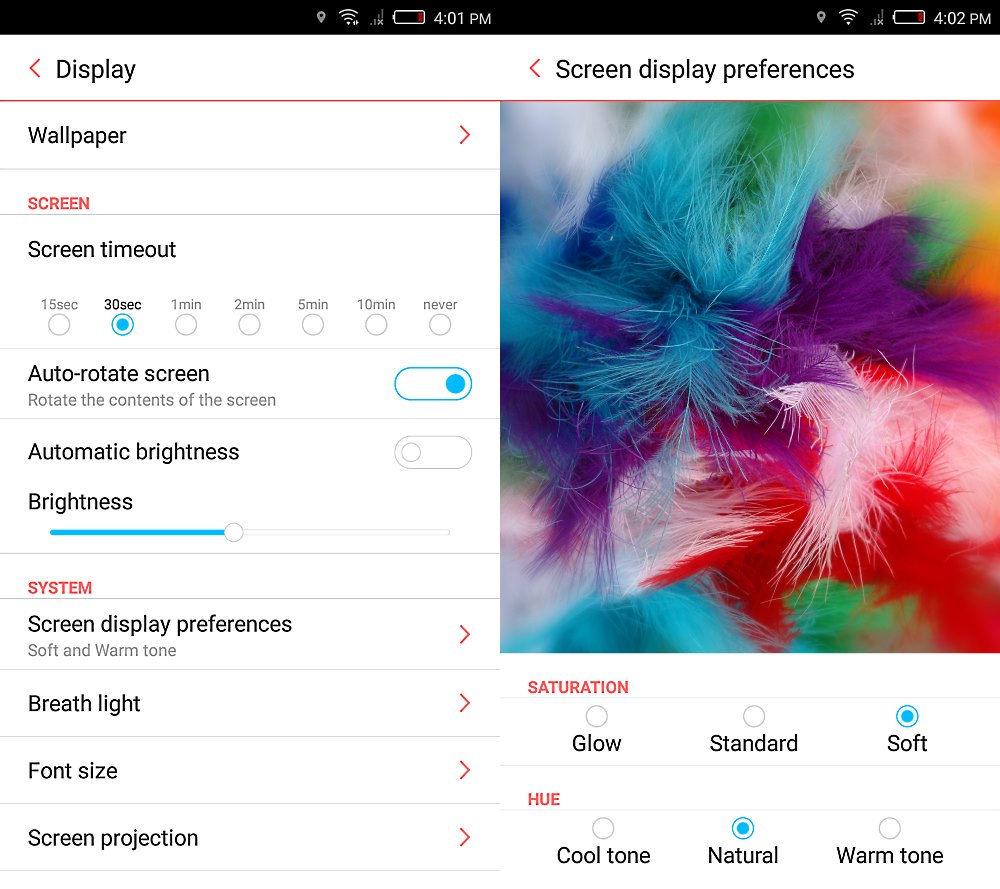 The panel is little reflective and the brightness levels are on a lower side too. Because of this, it is difficult to see the display in good sunlight condition outdoors, even with the full brightness. Unfortunately, auto-brightness doesn’t perform well too. Apart from this, the display has a Corning Gorilla Glass 3 protection. But over a small period of using the device we found some hairline scratches on the display, so we will advise you to rather get a screen protector.

Other than that, what Nubia UI 2.8 brings to display is two features that will come handy for you – split screen, and one-handed operation. Split screen essentially divides your display in two parts, so you can do two things simultaneously. Unexpectedly, the feature worked pretty well. 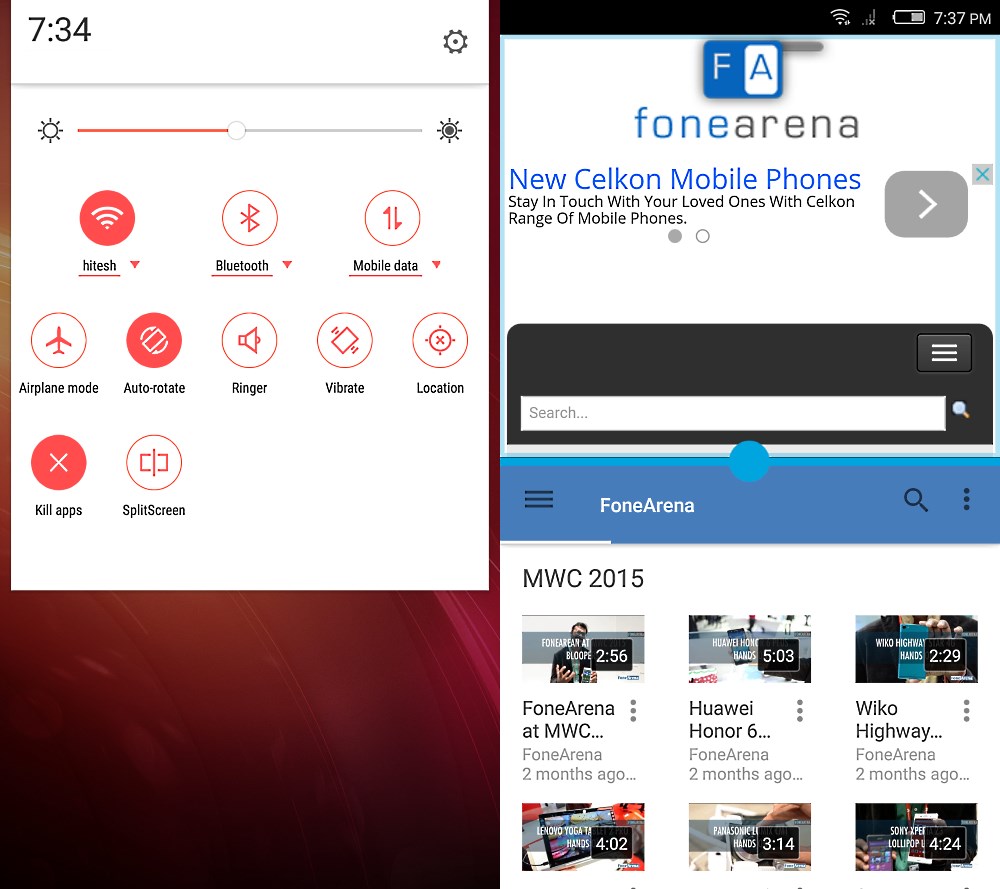 Second feature that is useful here is one-handed operation, so you can simply shake the device to use it and can even lock it to either side. 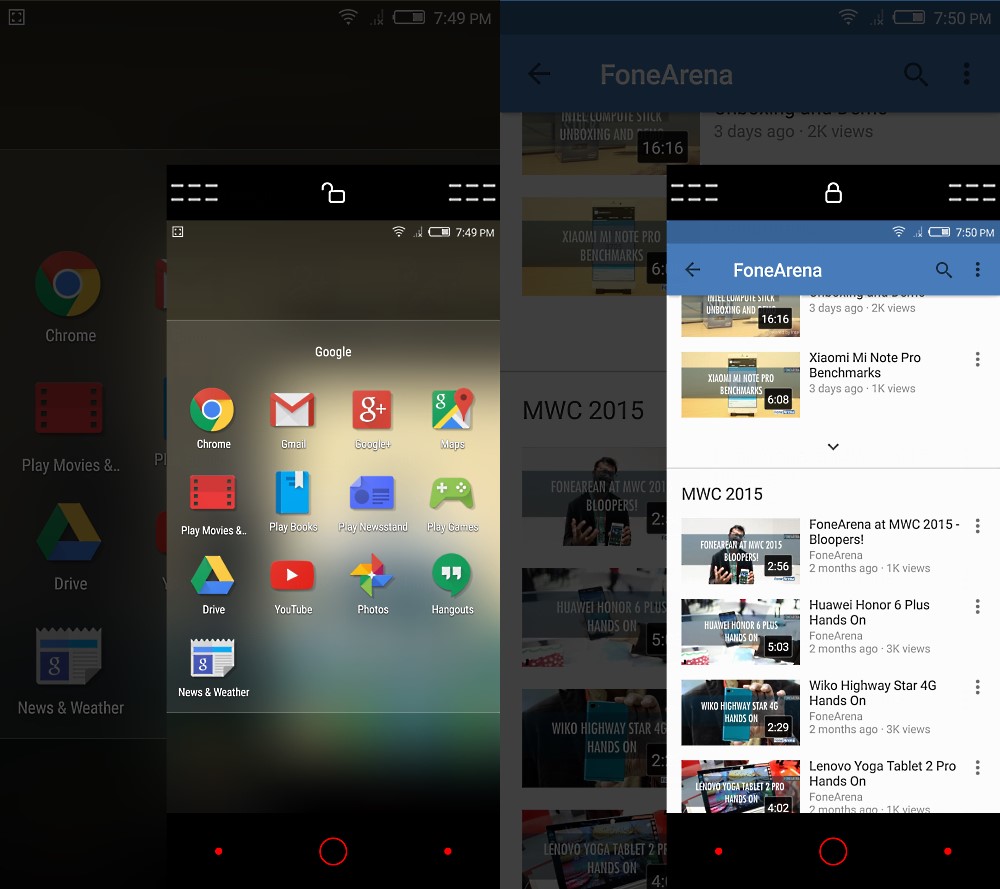 The Z9 mini is powered by a 64-bit octa-core Qualcomm Snapdragon 615 (quad-core Cortex-A53 1.5GHz + quad-core Cortex-A53 1GHz) processor coupled with 2GB of LPDDR3 RAM. The phone’s performance is quite snappy, but then it would occasionally crash apps or reboot as well. We didn’t encounter this problem very frequently, but a few times was expected from it. Also, the phone gets a little warm while multitasking. Even further, on heavy usage like gaming and continuous video playback, the Z9 mini gets heated-up from the center-left of the back by fair amount. Games like Subway Surfer, Temple Run ran smoothly without warming the phone by great amount. 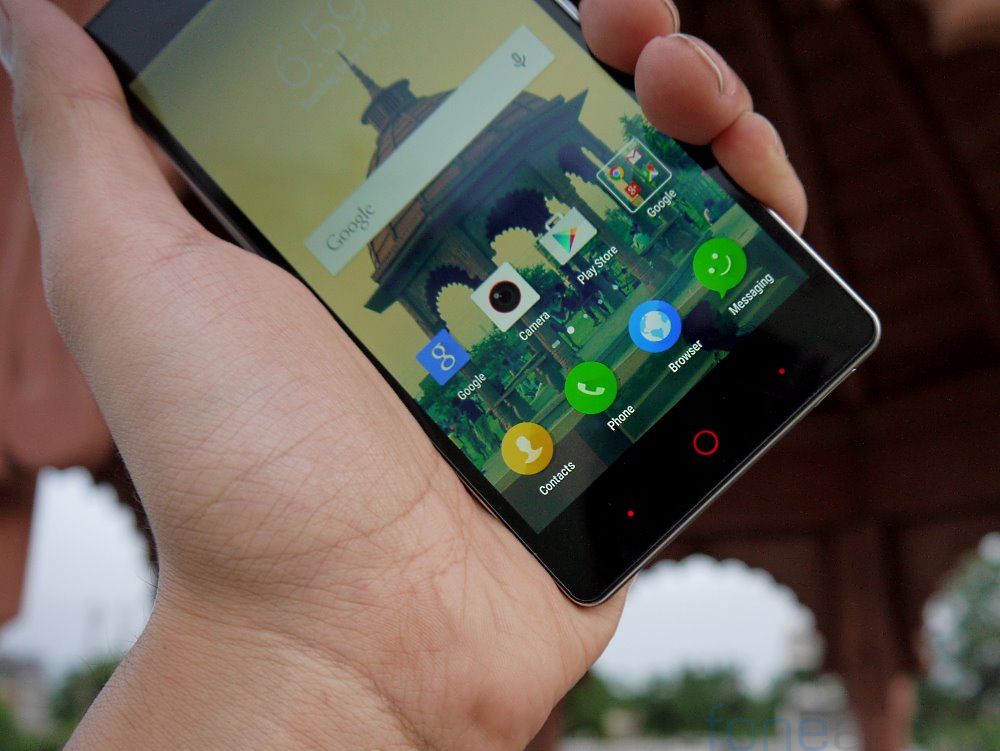 Coming to audio/ video playback, the smartphone excels in both department. Loudspeaker output is average, so there is nothing to brag about. The handset also includes FM Radio. On software front, the Z9 mini runs Android 5.0 Lollipop with company’s own Nubia UI 2.8 out-of-the-box. The UI is quite fast, smooth and responsive, and has similarities with Xiaomi’s MIUI and Huawei’s Emotion UI. Like them, this also has lots of customisation options.

The two nifty features that we would recommend it to you is double tap screen wake-up and palm screen lock. You can find these features in Settings > System > Feature > Touch gestures. 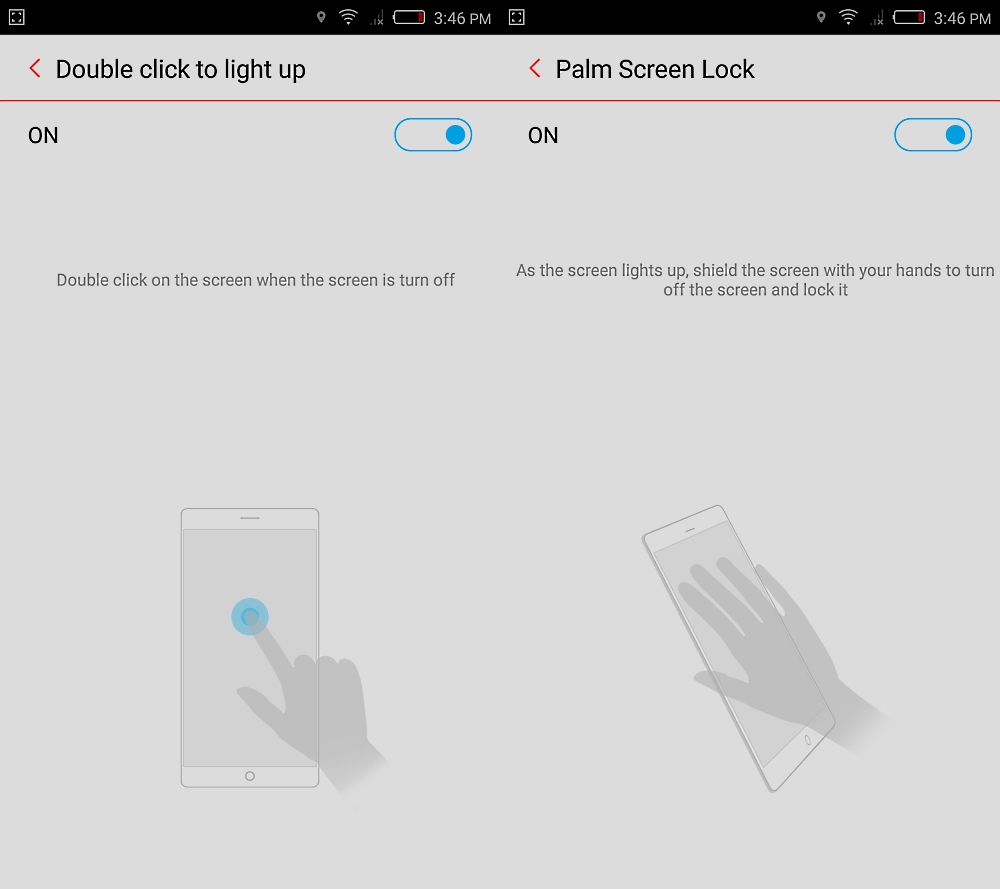 Also, there are few other gimmicky features like flip to mute/ pause, Shake the device to change songs and more. You can free up the app memory with a single tap, just like Xiaomi’s MIUI.

Overall, we found the device to be an average performer and ZTE could have done better in this department. 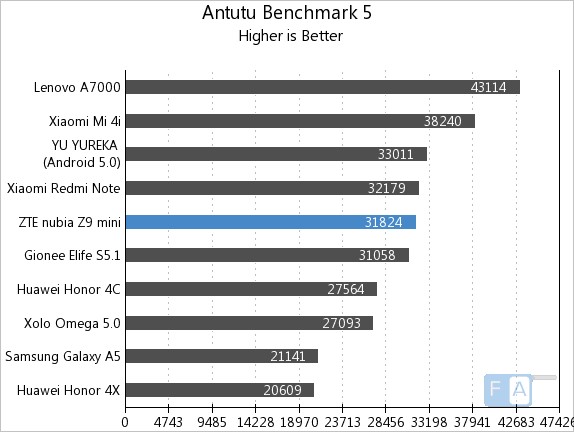 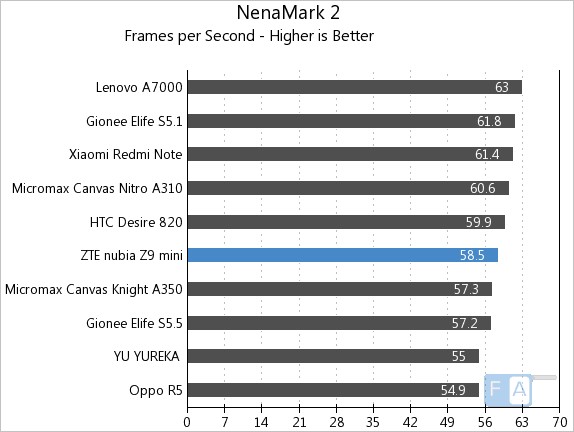 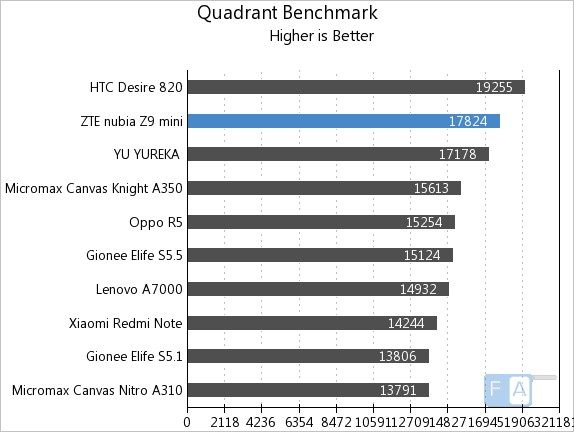 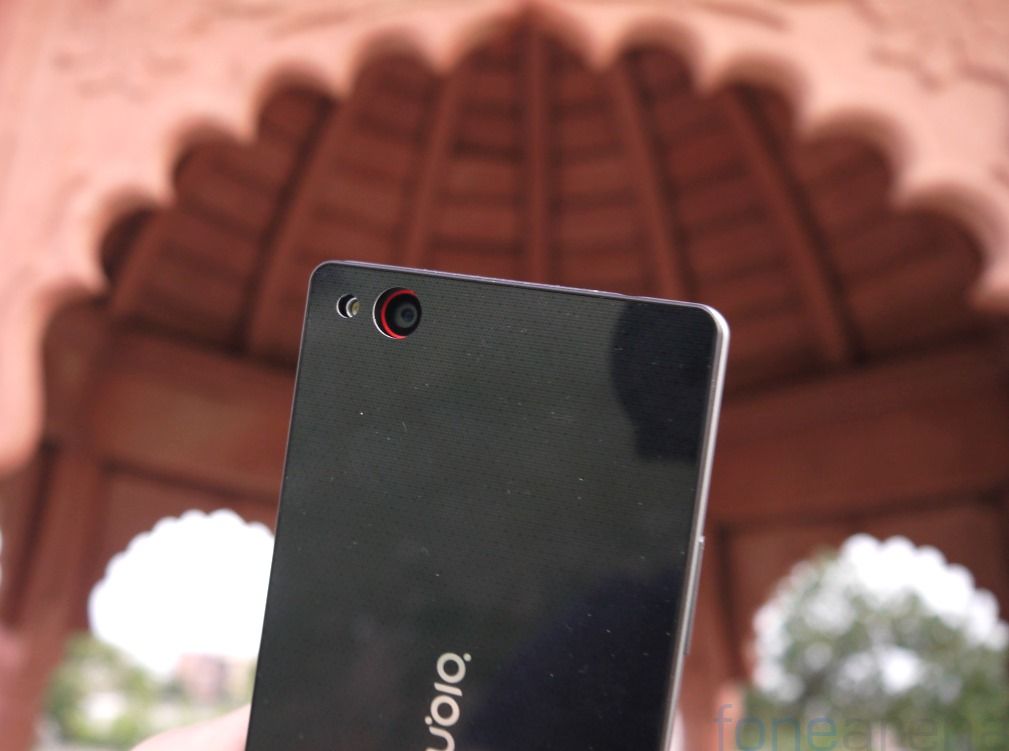 The device packs a 16-megapixel rear camera (Sony IMX234 Exmor RS sensor) with f/2.0 aperture. It’s a stunner and at par with most flagship devices. The auto-focus speed is very good and it is a delight for camera freaks. You get a lot of custom settings option such as adjustable aperture, adjustable shutter speed and even the things like independent metering, and white balance. 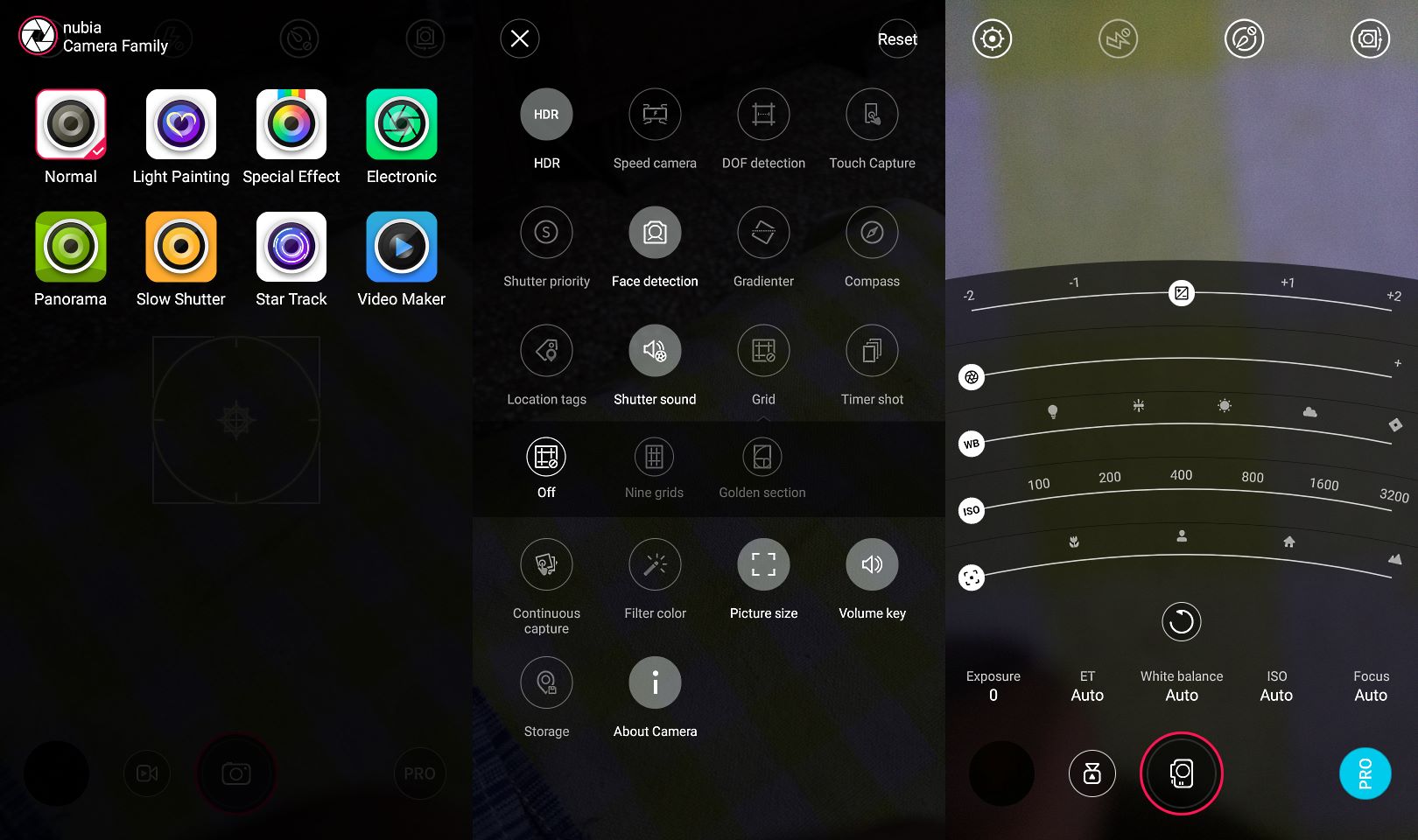 The images taken in daylight were very sharp and had great details. Even in the low light conditions, the rear camera does a decent job with PRO mode. The only drawback here is the LED flash and the colour reproduction appears slightly unnatural at times. Shots taken with Flash were inconsistent and had too much noise. Nonetheless, the camera can also capture quality 1080p videos with ambient sound. 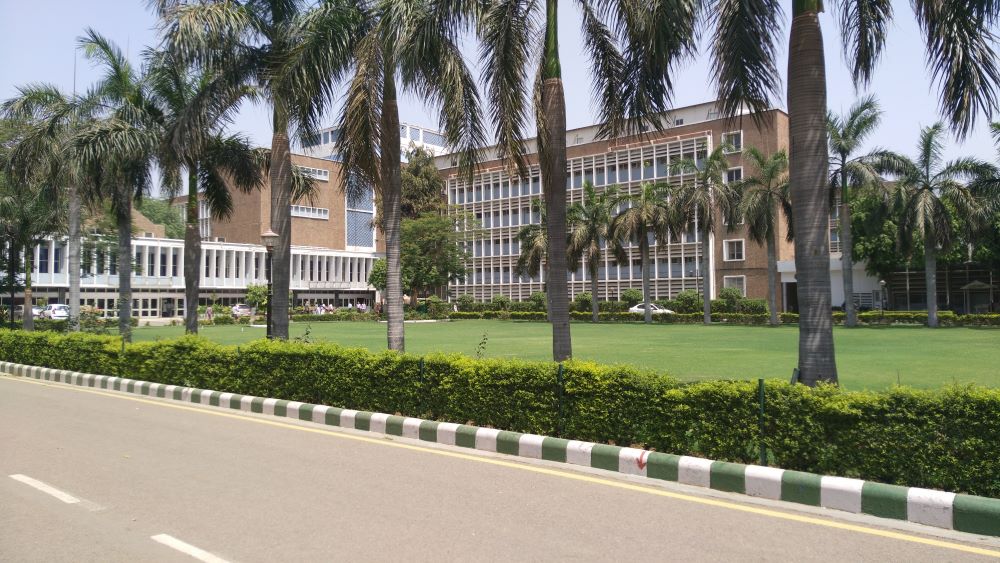 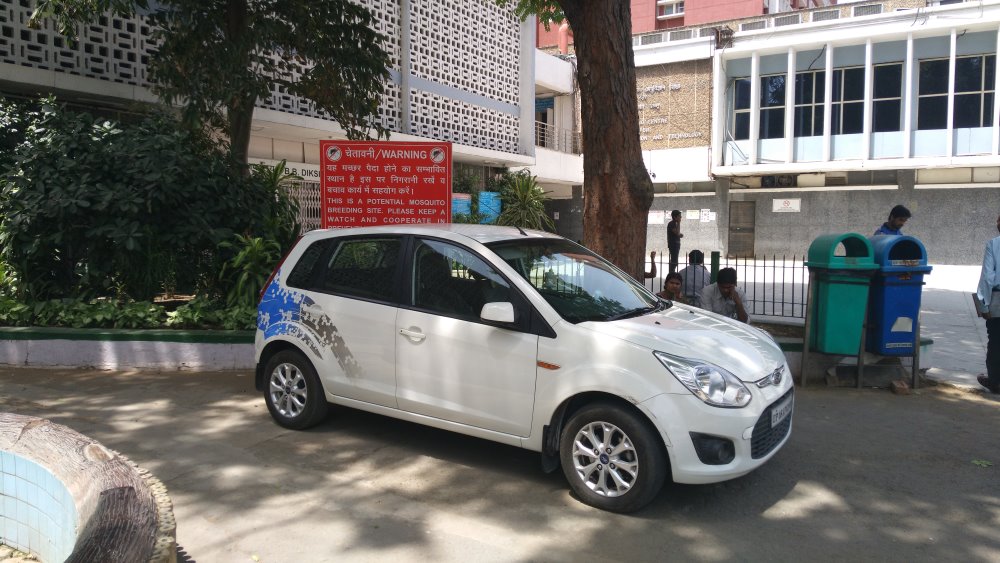 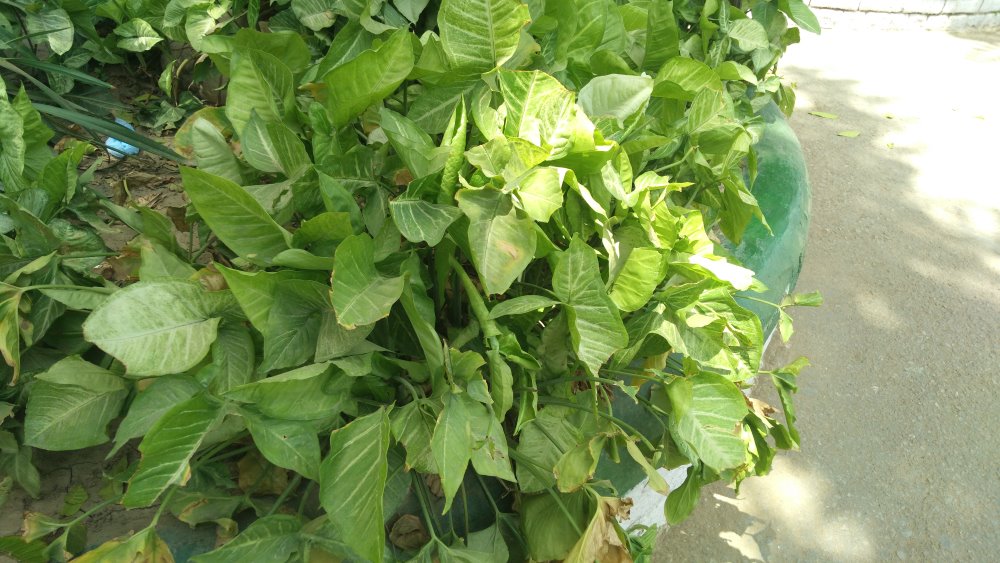 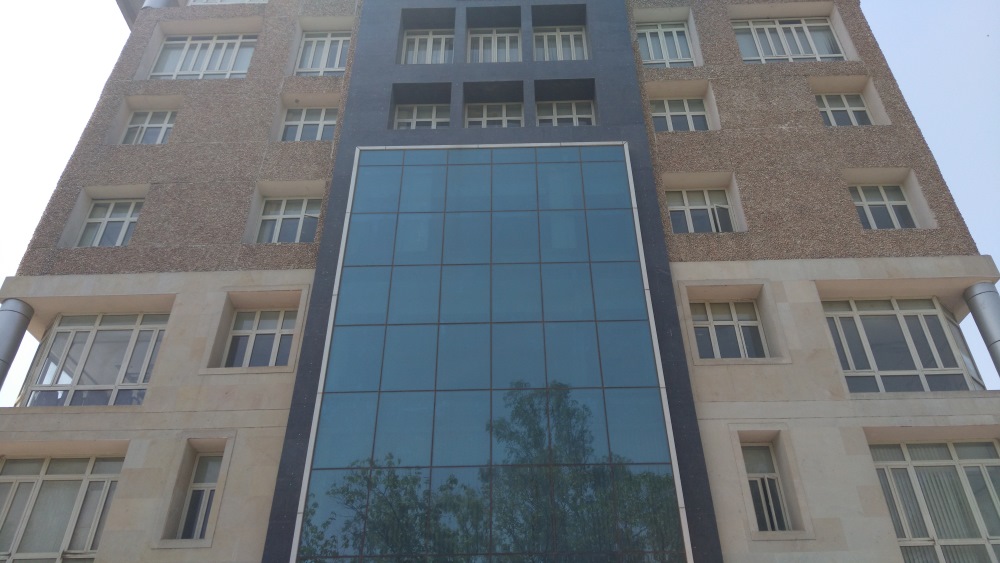 The Nubia Z9 mini accommodates dual Nano-SIM in a single tray located on the left edge. It supports 4G LTE connectivity on both SIMs, and is compatible with networks with in India. Connectivity options on device include WiFi 802.11 b/g/n/ac, Bluetooth 4.0 and GPS/ A-GPS.

The handset comes with 16GB of built-in storage, of which you get about 11GB of free space. The expandable microSD card slot (up to 128GB) is present under removable back flap. Unfortunate, you cannot move apps to SD card storage. It also has USB OTG (on-the-go) support.

The battery on the device is a non-removable 3000mAh battery, which is slightly bumped up from 2900mAh battery in Chinese variant of Z9 mini. With average usage, the handset easily lasted a full day. We have already mentioned about the heating issue, which in-particular troubled battery time in things like gaming, video playback etc. 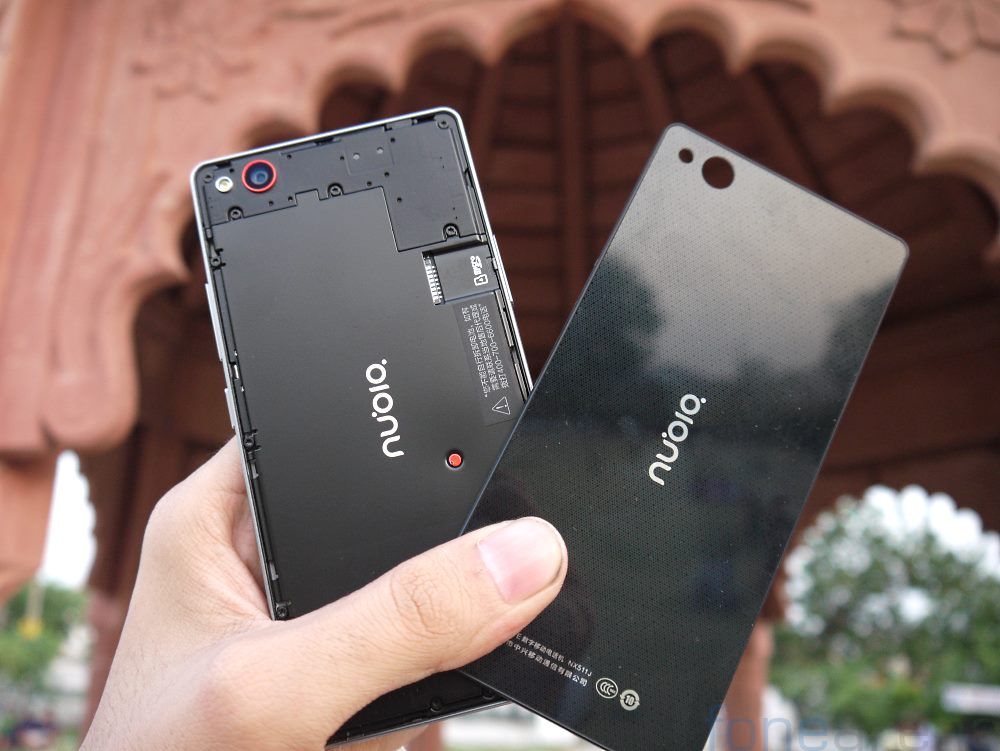 The Nubia Z9 mini is definitely a well-built good-looking device from ZTE. We had a great time reviewing the device and especially the two stunning cameras. So if you are looking a device that serves better on camera front then this should be your choice, though we feel that ZTE could have easily kept the price under Rs. 15,000.

Overall, the smartphone performance is average. The regular heating issue was something that annoyed us at times. Let’s see if ZTE could help solve this little with a firmware update, similar to what Xiaomi is trying for Mi 4i. The two smartphones – Nubia Z9 mini and Xiaomi Mi 4i – share mostly similar specifications, but Xiaomi has an edge with less pricing. You can read our full review of the Mi 4i for a better decision. My personal choice is Mi 4i, as it is certainly a value for money product.