A new Samsung tablet that is codenamed ‘CHOPIN-LTE” has been spotted on Geekbench. The listing shows the tablet will have 4GB RAM and an Intel processor. 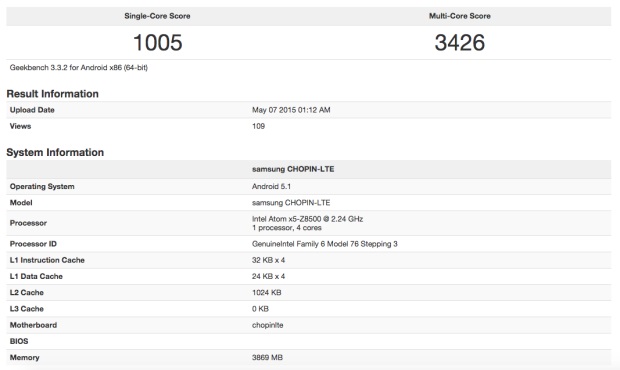 As per the listing, the Samsung “Chopin-LTE” tablet has Intel Atom x5-Z8500 processor that is based on company’s 14nm Cherry Trail platform with four cores clocked at 2.24GHz as well as 8th-generation Intel graphics. The tablet will run latest Android Lollipop 5.1. Considering the codename of the tablet it seem that it will support LTE connectivity. Currently, there are no details about the display, camera and other features of the tablet. However, if the the tablet has a 4GB RAM it is safe to say that it will be a high-end tablet.