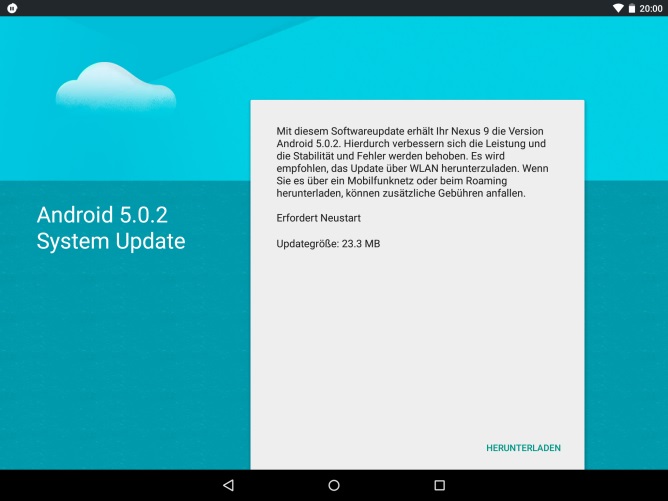 The Lollipop 5.0.2 update does not add any thing to the device but receives minor bug fixes. Google first released Android 5.0.2 back in December. The company also hinted that the Android 5.1 OTA update is being worked on, and should be released in some time. The latest Android distribution numbers showed that Lollipop is now present on 9% of Android devices.

Google unveiled the Nexus 9 tablet made by HTC back in October. In December the 16GB WiFi variant went on sale on Amazon for Rs 28,900. The Nexus 9 has a 8.9″ (2048×1536 pixels) IPS display with Corning Gorilla Glass 3 protection. It is powered by a 2.3GHz Dual Denver Nvidia Tegra K1 64-bit processor with 192-core Kepler GPU and comes with 2GB of RAM. It runs on the latest Android 5.0 (Lollipop) OS. It has dual front-facing speakers with HTC BoomSound capability, 1.6-megapixel front-facing camera, 8-megapixel rear camera with LED flash on the back and a 6700 mAh battery under the hood.

Check out our Nexus 9 review here.