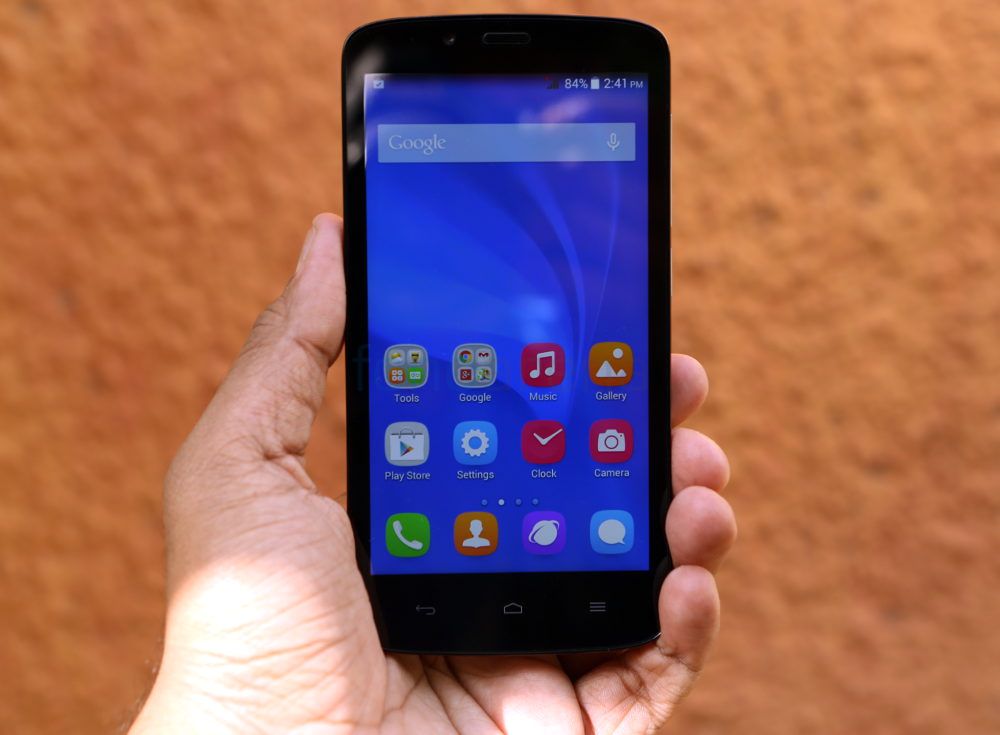 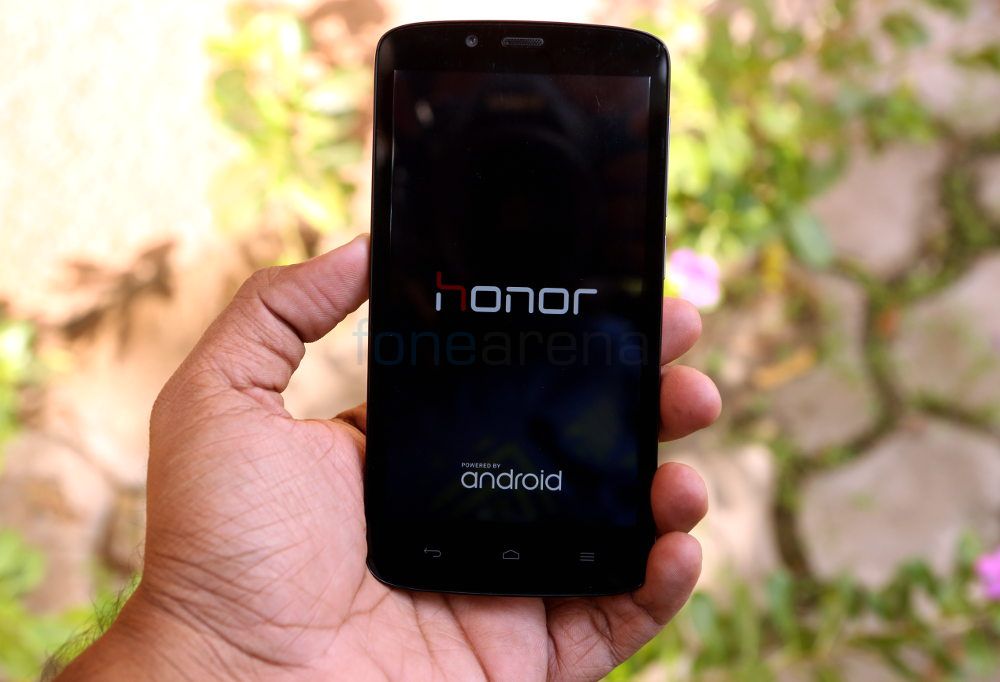 The 5.0-inch display with a resolution of 1280 x 720 pixels at 294 ppi is bright, but it is very glossy and is prone to fingerprints. It offers vibrant colors and has decent viewing angles. It doesn’t have Corning Gorilla Glass 3 protection like the Redmi 1S or the Motorola Moto E. It is curved in the corners and has huge bezels around the display, making it slightly wider at 72.3mm, compared to 70.7mm in the new Moto G smartphone. It looks premium even though it’s a budget phone. 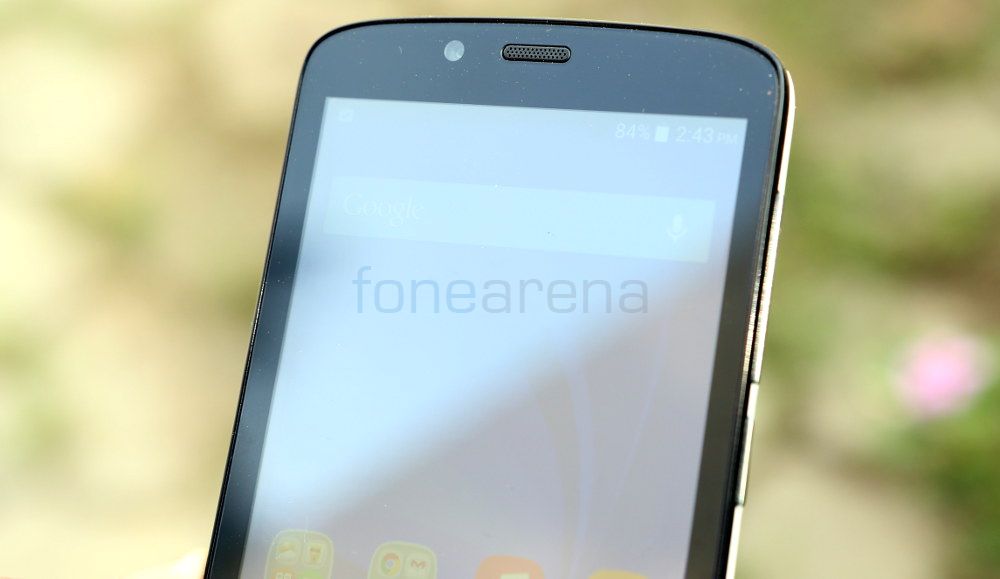 There is an earpiece above the display, next to the 2-megapixel front-facing camera that supports video recording at VGA resolution. The usual set of proximity and ambient light sensors are present next to the camera. It also has an LED notification light that is hardly visible when it’s not glowing. 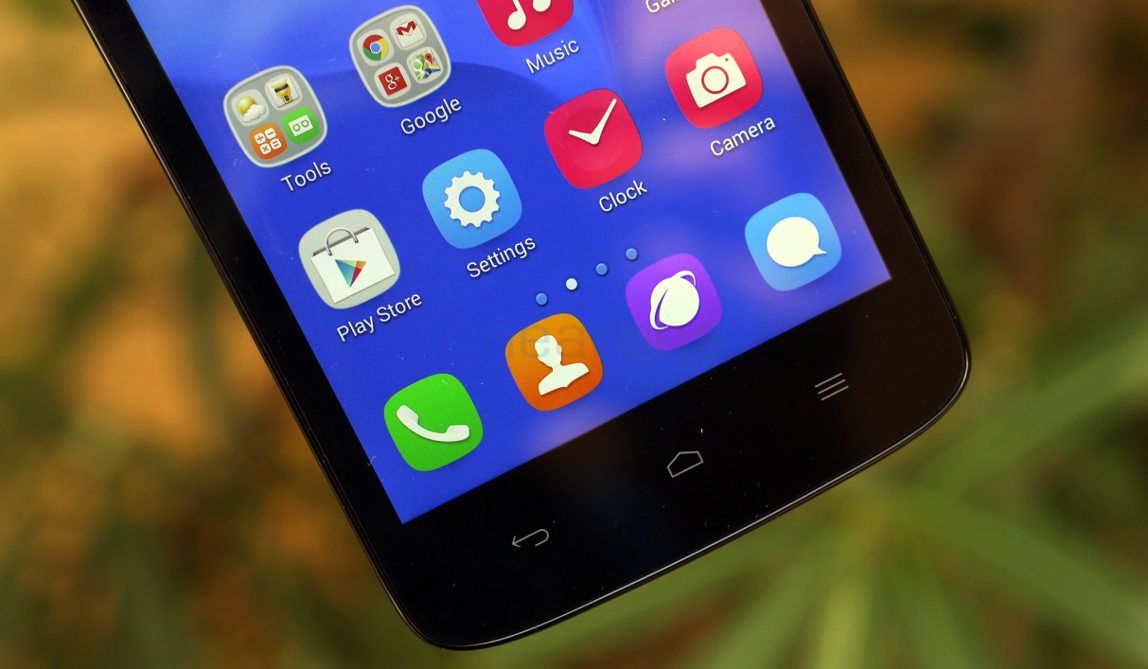 There are capactivive touch buttons below the display. These are not backlit, but offer haptic feedback when pressed. 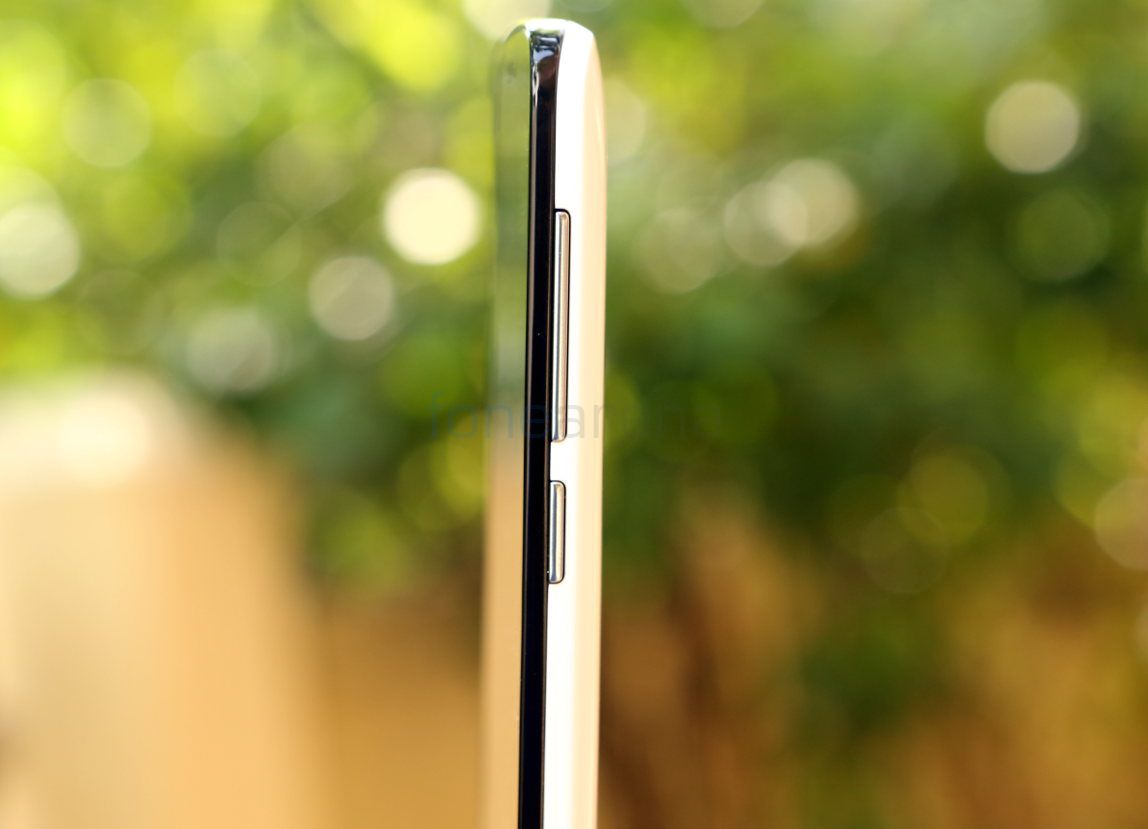 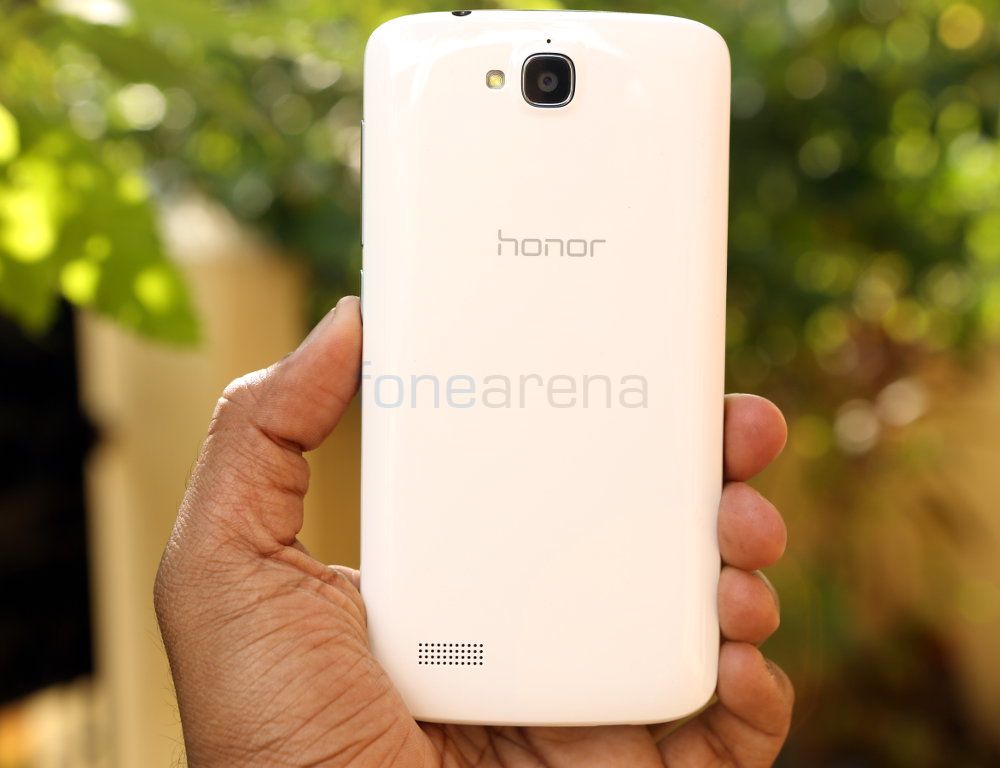 The smartphone has a shiny plastic back cover that attracts fingerprints easily. The 8-megapixel camera with LED flash, secondary microphone and the loudspeaker grill are present on the back. It weighs 156 grams. 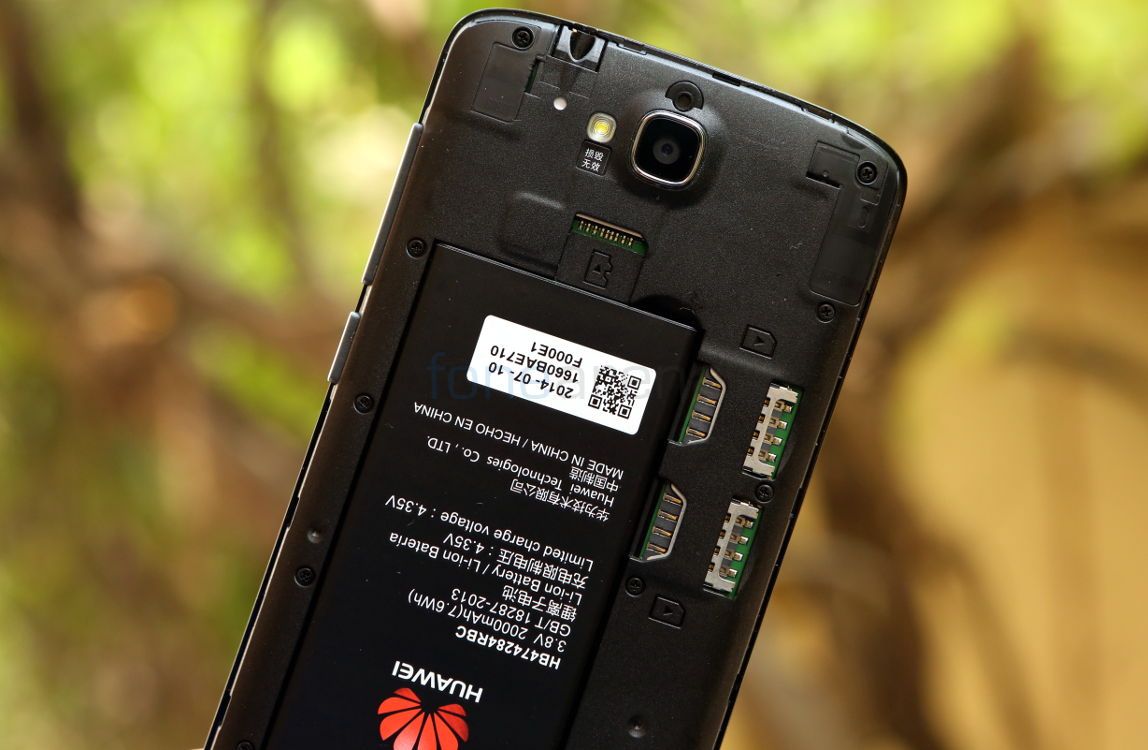 Once you open the back cover, you can see the microSD card slot below the camera module, 2000mAh removable battery below that and the two micro SIM slots next to the battery. 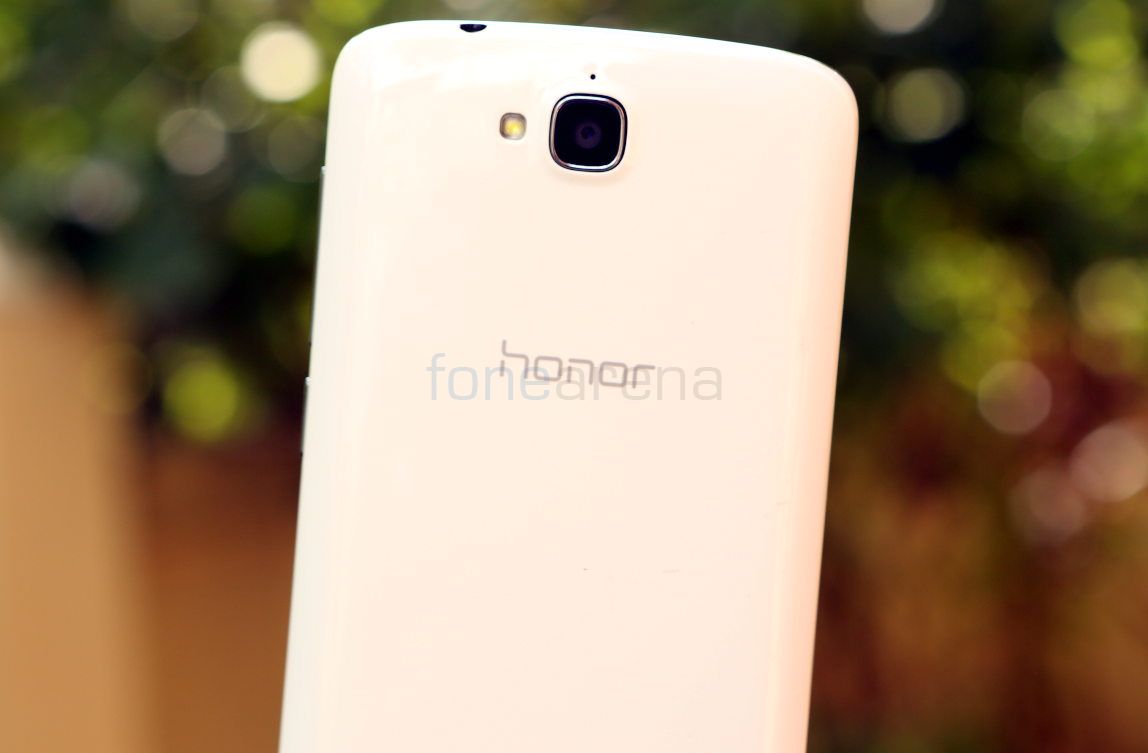 The 8-megapixel rear camera with LED flash and f/2.0 aperture is decent, but not impressive. Daylight and macro shots were good. Low-light images had a lot of noise obviously, but flash helps in such conditions. Unlike Huawei Ascend Mate that had Huawei’s own camera interface, this has a MediaTek camera UI seen on several MediaTek-powered Android smartphones. 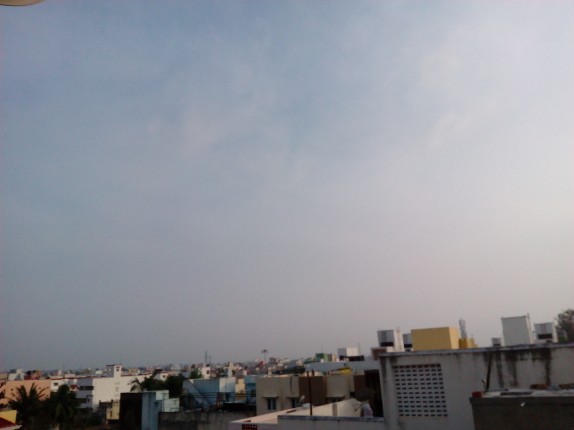 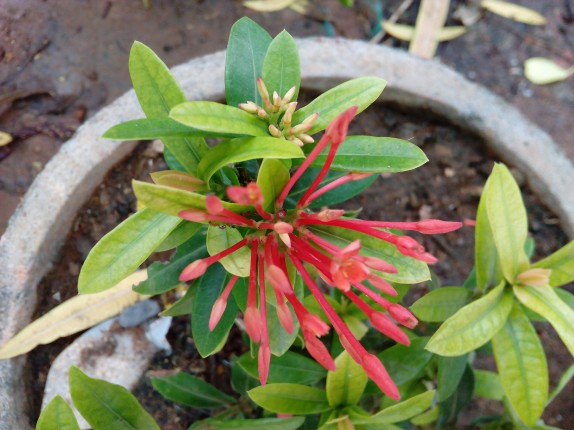 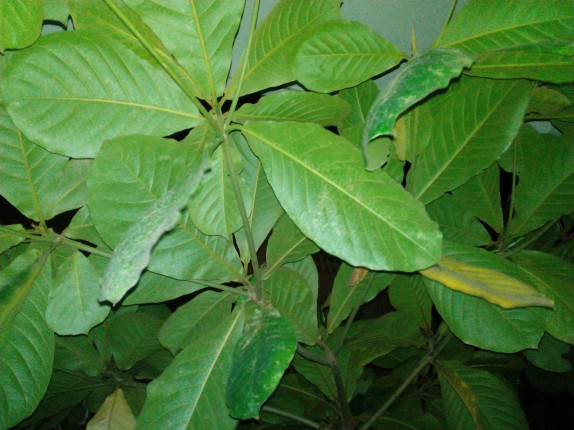 Check out the complete set of Huawei Honor Holly camera samples here. It can record videos at 1080p full HD resolution at 30fps, which is decent. Since it has a secondary microphone, it supports stereo recording. Check out the 1080p video samples below. 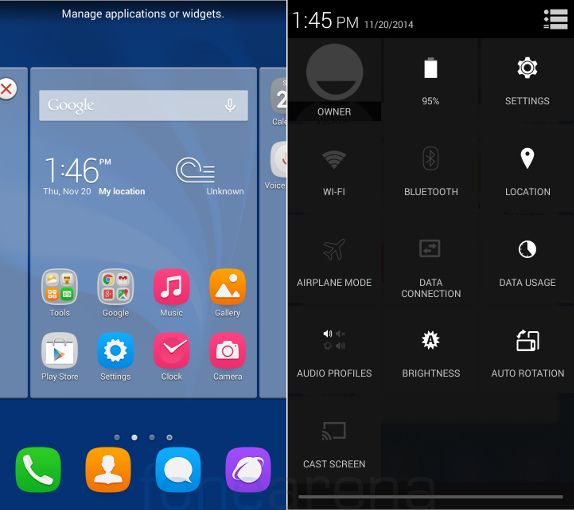 Coming to the software, the phone runs on Android 4.4 (KitKat) with Huawei’s own Emotion UI 2.3 on top. The home screen and the settings menu have Huwei’s user interface, but the notification and the quick settings have stock Android skin seen on MediaTek-powered smartphones. The Emotion UI doesn’t have a separate menu, so all the apps are present in the home screen. You don’t need to create a shortcut for app and can access all the important apps just by arranging them into a folder. 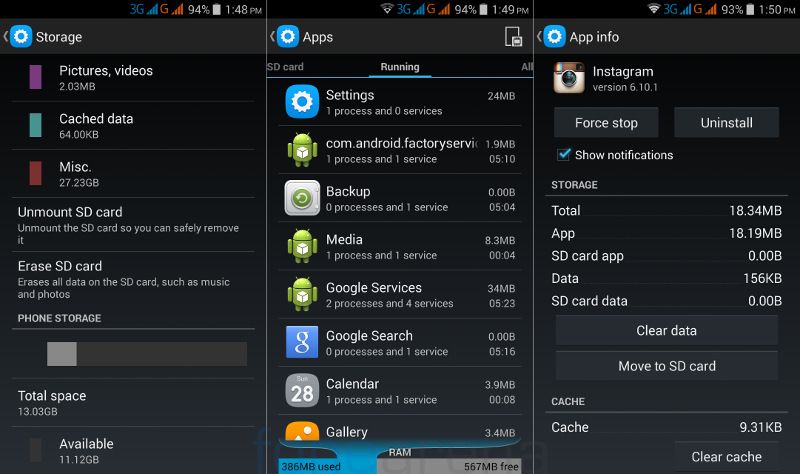 The phone has 16GB of internal storage, and you get about 13GB of usable memory. Out of 1GB of RAM,there is 567MB of free RAM when the phone is idle. You can also move compatible apps to the microSD card. 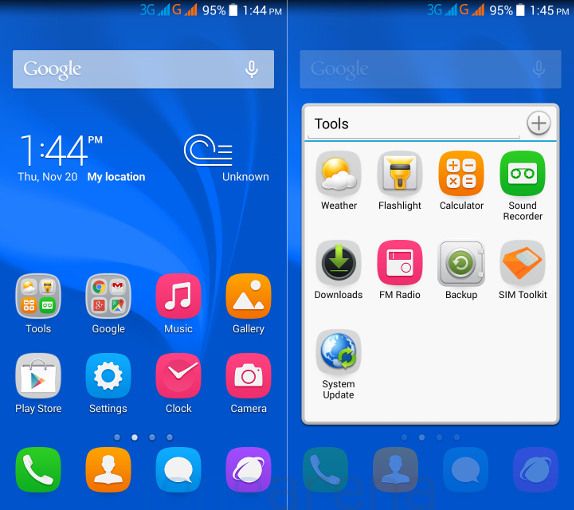 It comes with the usual set of utility apps and Google apps. It also has official Flipkart app and Flipkart eBooks app since the company has an exclusive partnership with Flipkart to sell the smartphone. It doesn’t come with any other bloatware. 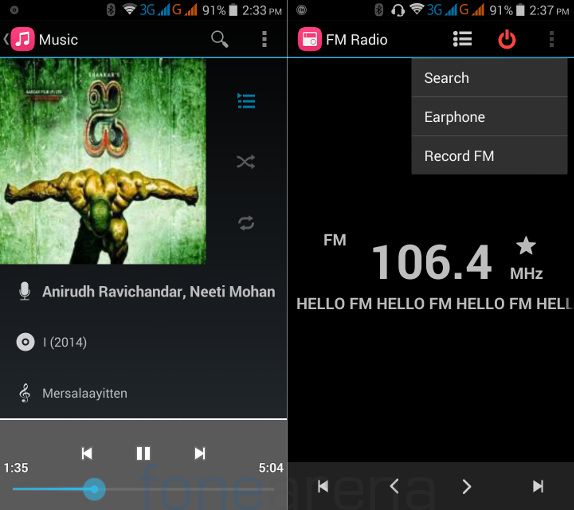 The Music Player is simple and can play a range of audio formats. The FM Radio is stock and has RDS support. The phone can play 1080p full HD videos smoothly. The loudspeaker output is low even in full volume. The smartphone doesn’t come with a headset in the box. Audio through third-party headset is decent. 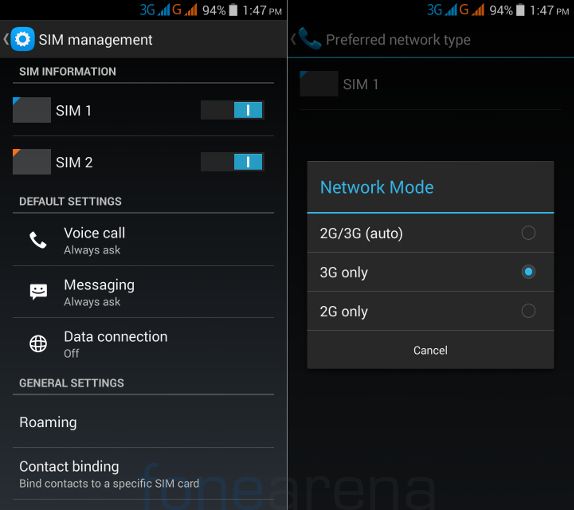 Only the primary SIM supports 3G. It has SIM card manager option to configure each SIM for calls, messaging and data. Connectivity features include, 3G HSPA+, Wi-Fi 802.11 b/g/n, Bluetooth 4.0 with A2DP and GPS. It has support for wireless display, but lacks USB on-the-go (OTG). 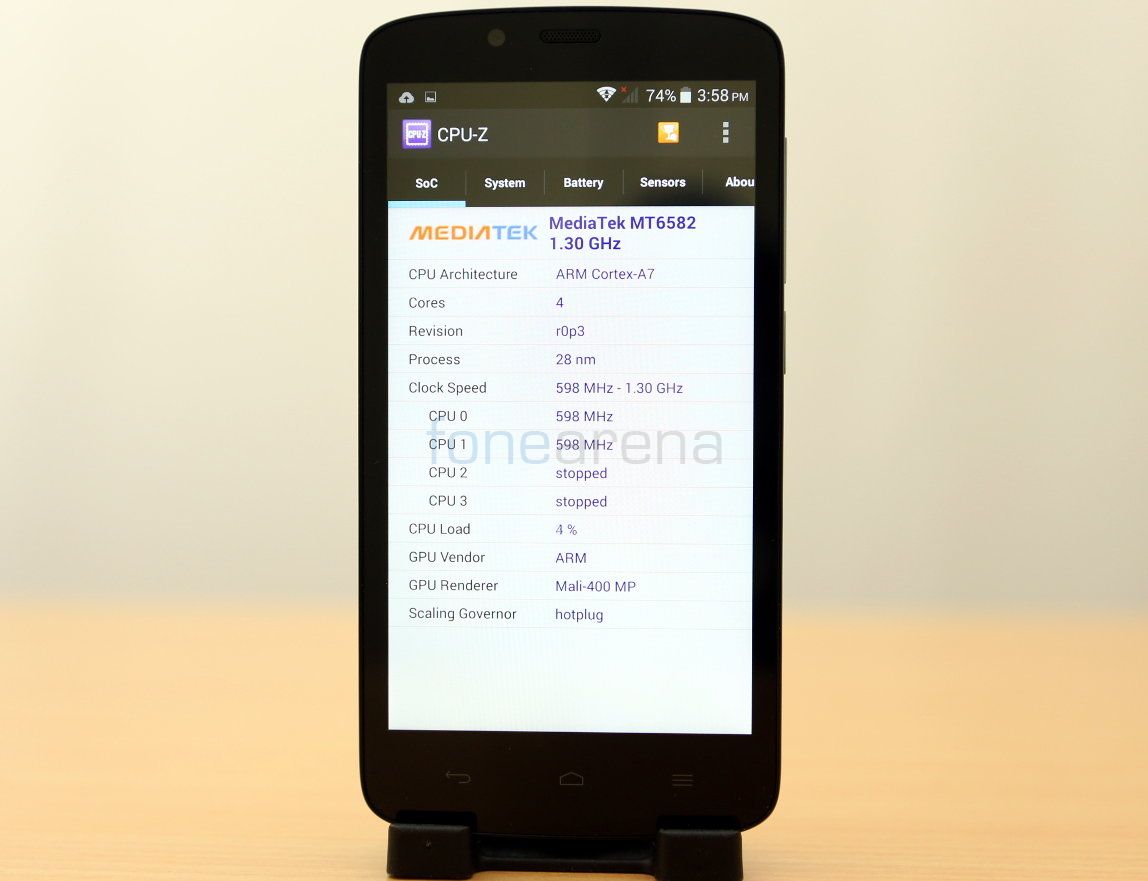 It is powered a quad-core MediaTek MT6582 processor with four ARM Cortex A7 CPUs clocked at 1.3GHz per core and has Mali 400 GPU. Performance is good without any lags. Thanks to 1GB of RAM, multi-tasking was smooth. Check out some benchmarks below. 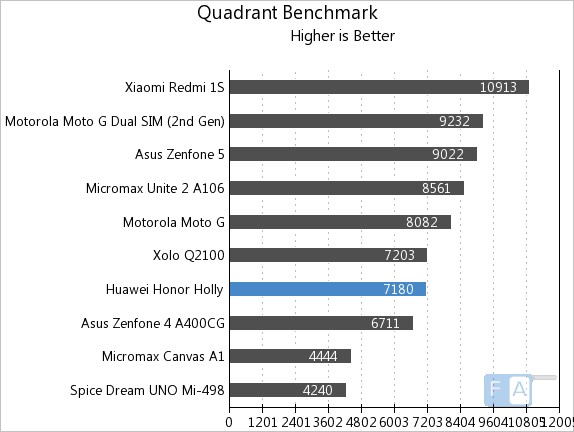 It managed to score 7180 points and lies behind the Xolo Q2100 smartphone in the Quadrant benchmark. 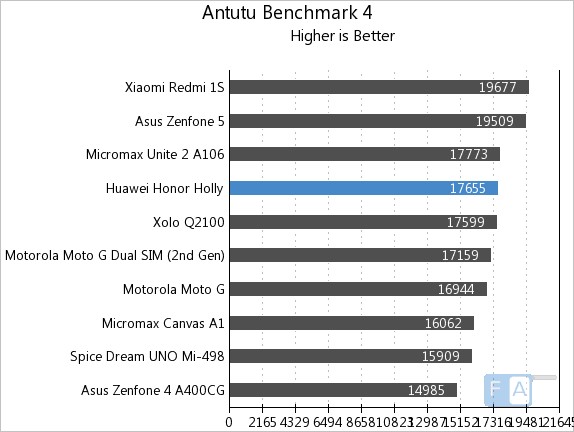 It scored 17655 points in the AnTuTu benchmark 4 and lies behind the Micromax Unite 2 smartphone that is powered by the same chip. 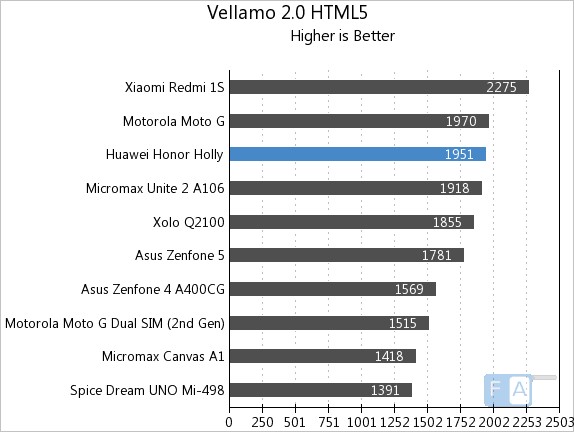 It grabs the third spot, ahead of most other smartphones in the Vellamo 2 HTML5 browser benchmark. Check out the complete set of Honor Holly benchmarks here. We tested some games on the device, which were decent. Some games worked only with low graphics, but other games had good graphics with occasional lags in the gameplay. It doesn’t support USB or PS3 controllers and takes some heavy games take sometime to load. It scored 3.5/5 in our gaming test. Check out the gaming review below, to know more about the gaming performance of the smartphone in detail. 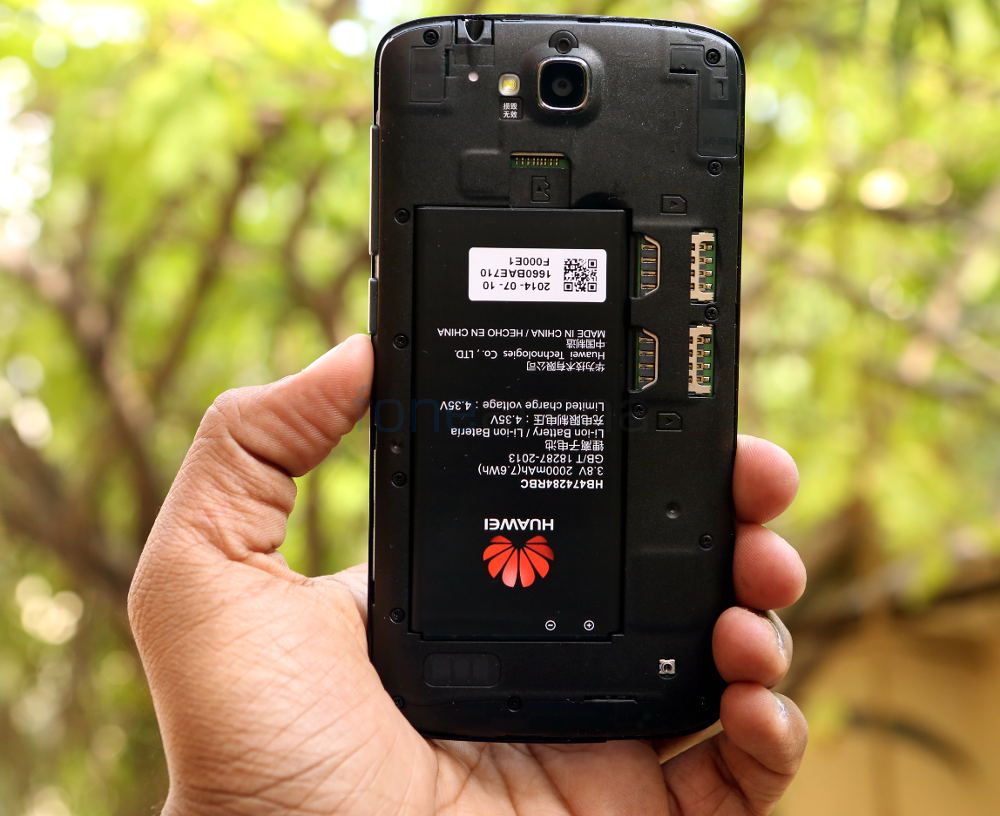 The smartphone packs a 2000mAh removable battery, similar to most other budget smartphones, including the Android One lineup. It offers decent battery life that lasts for a whole day with average use when both the SIM cards are on use. With heavy usage such as continuous 3G whole day and intensive gaming, it lasts for less than a day. 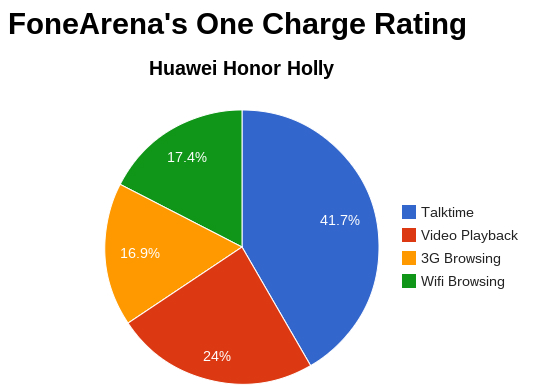 In our battery test the smartphone lasted for 7 hours and 37 minutes, which is decent for a smartphone in the price range. This is better than the Android One smartphones, but the Moto E and the first-gen Moto G offer better battery life. You can check out the Huawei Honor Holly battery test results here.

At the price tag of Rs. 6,999, Huawei has offered a decent package. This directly competes with the Xiaomi Redmi 1S, which is still one of the best budget smartphones. Even though the Honor Holly is not good enough with Redmi 1S in terms of performance and camera, it offers good value for money. Availability is the main concern for both these smartphones. Xiaomi offers the Redmi 1S smartphone in flash sales every week. Huawei sells the smartphone only on Flipkart, but it immediately goes out of stock immediately after it is replenished. If you are looking for a smartphone under Rs. 7000, but don’t want to go for Redmi 1S, the Huawei Honor Holly is definitely a good choice.