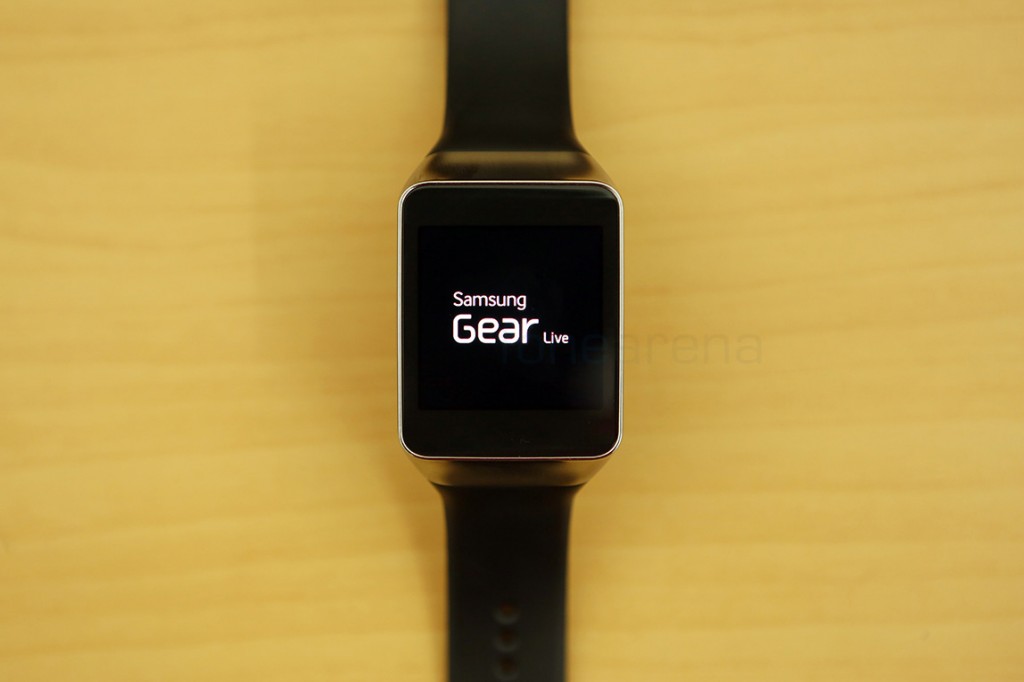 Samsung was one of the first consumer electronics giants to dive head-first into the world of wearables with its own line of Smartwatches, starting with the Gear. The original Gear that initially ran on Android, now runs on Tizen, and Samsung’s already iterated on it a couple of times, with the Gear 2, the Gear Fit, the new Gear S, all variations and experiments on the hot new market.

But then Android Wear happened, with Samsung announced as one of the partners. Rival LG had already announced its first Watch, but Samsung waited until IO to announce their first smartwatch that will work across all Android devices, not just Samsung ones, the Gear Live. The Gear Live, the stripped down Android variant of the Gear 2, joins the other Wear watches, in the effort to appeal to consumers willing to invest in a new category of devices. With Android Wear as the platform of choice, does the hardware push the boundaries, or does it play a safe losing game? Let’s find out. 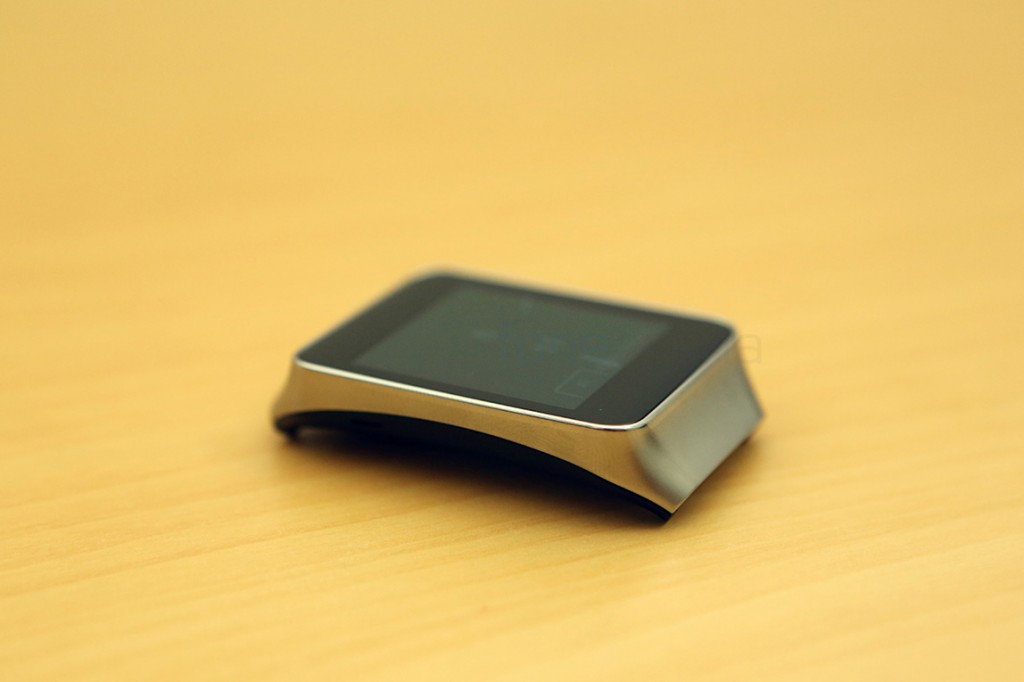 The Samsung Gear Live heavily borrows its design from the Gear and its successors/variants. A blocky rectangle dominates the face of the watch, enclosed in a stainless steel frame at the front and a plastic back. The glass gently curves into the steel enclosure, adding a bit of flair to the otherwise drab looking watch. The bottom part of the watch is fully plastic, with the top and bottom ends curving a bit to provide the ergonomic fit on the wrist. This makes it easier for continuous wear, with the expected comfort levels. The strap is made of a silicon-like rubbery material with ridges on them, aimed at creating a good grip on your wrist, which it achieves. It’s clear that Samsung has iterated on its design and made important improvements to the Gear Live but it is still uninspiring and frankly looks very normal. 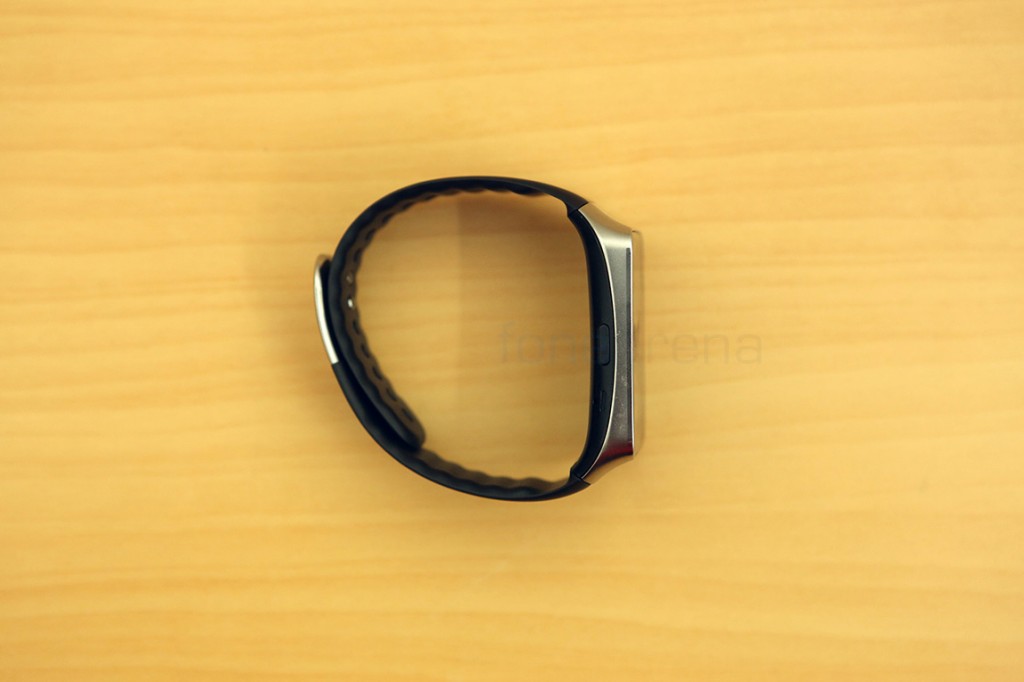 Measuring 8.9mm in thickness, the Gear Live is not too thick, but at the same time, it is not too thin either. However, when it comes to real feel, forgetting numbers for a moment, the curved ends of the plastic back make a real difference when it comes to sitting on a wrist. If you are not typing on a keyboard, the watch is comfortable enough for 24 hour wear. However, the watch lasting for more than 12 hours is an entirely different thing, which we will discuss in the battery life section, but if you are wondering if the watch is good enough for continuous wear, we can assure you that it is. From the picture above, you can also find the lone hardware button on the side. This is used to wake or lock the screen on a single press and take you to settings on a long press. 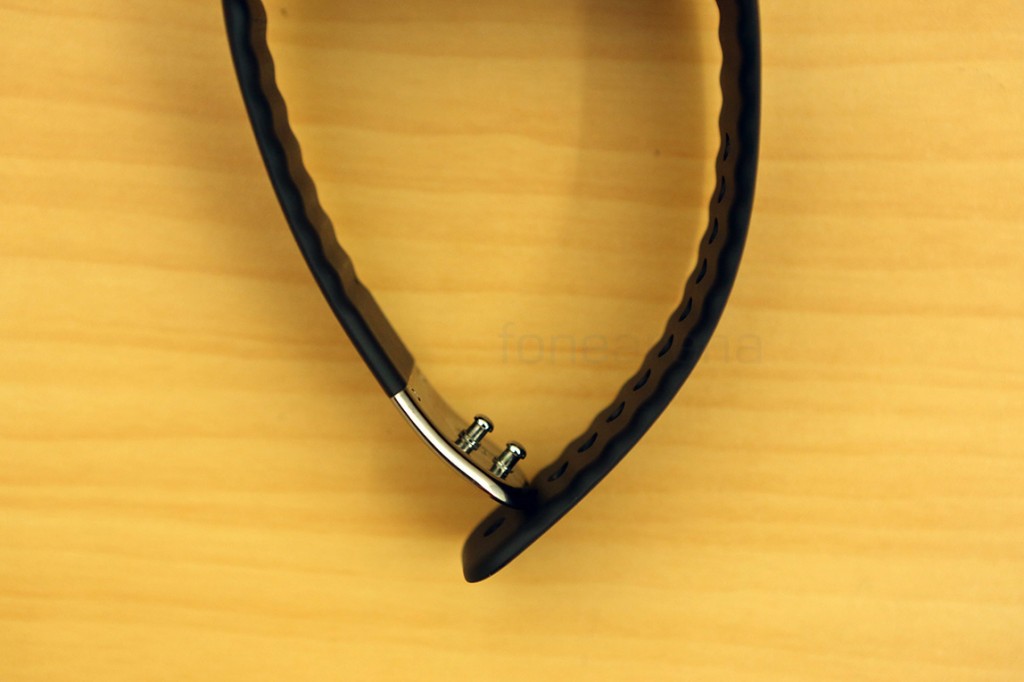 The strap buckle on the gear live is unusual. We don’t know why Samsung has opted for this, but considering this is the same design they followed in Gear Fit, we can’t complain much. The system works, for sure, but takes time getting used to, and there is always the fear of dropping the watch while fumbling to lock the two pins in. After a month of regular wear and tear usage, the locking became easier and even adjusting length became a lot faster. However, thanks to Samsung adopting the usual 22mm strap design, you can replace them with your choice, in a jiffy. 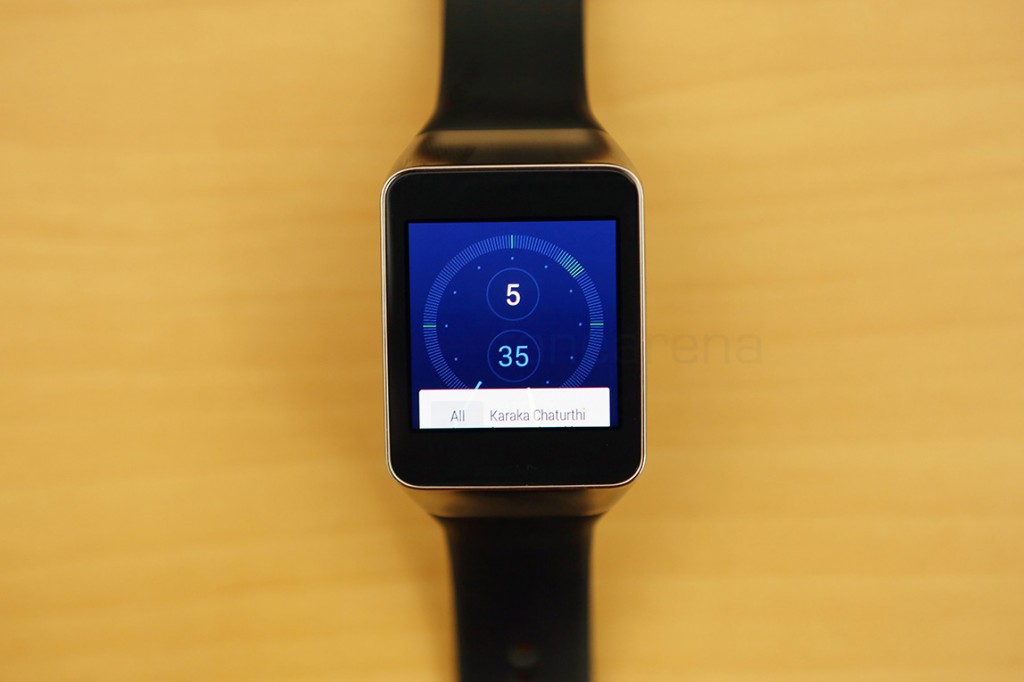 True to Samsung’s tradition, the Gear Live comes with a 1.63″ 320×320 super AMOLED display. The display is sharp, has good brightness, colours and great viewing angles but falls flat in bright outdoors. For a watch, an always-on display telling you the time and showing you a glimpse of the notifications you receive is the primary task when you are doing other important things like riding or driving. The Gear Live’s AMOLED display, which is supposed to make life easier, by not letting you take the phone out, actually makes it way more harder. 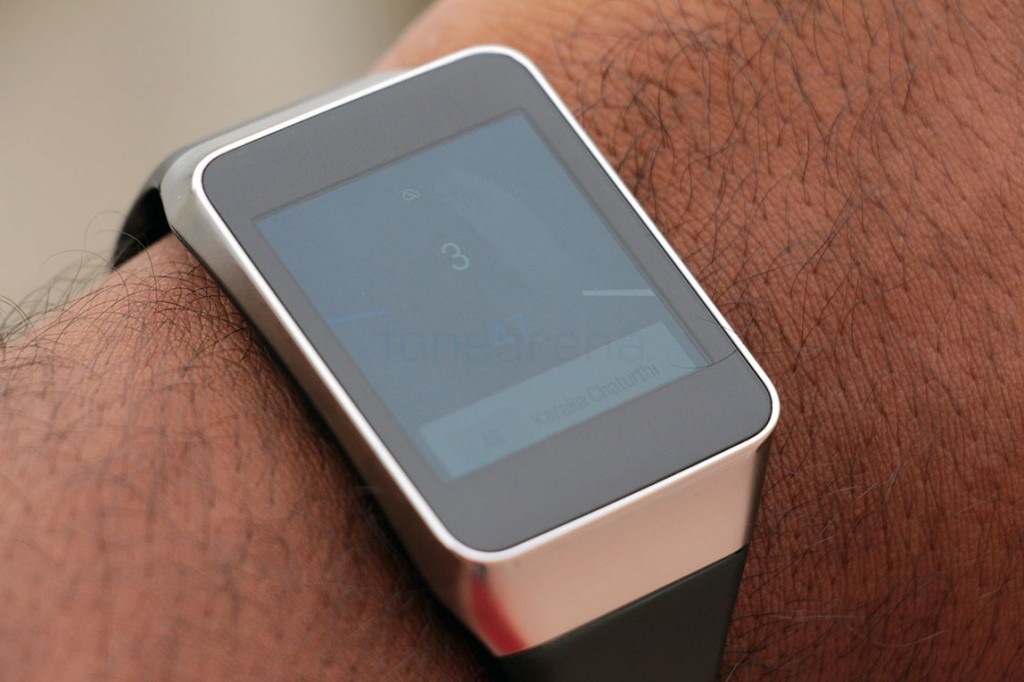 The above picture is indicative of what the outdoor performance is like for the Gear Live. It’s absolutely unusable, even when the brightness is high. Mind you, this is not even direct sunlight. The “at a glance” function is completely lost and you are left with a vibrating paper weight on your wrist when outdoors. There is clearly an air gap between the screen and the display which is responsible for much of the reflectivity going on, and we wonder why Samsung still went through. The display is actually good, but outdoor visibility is just a deal breaker, especially for something you wear all the time. Phone displays are excusable, watches are not. 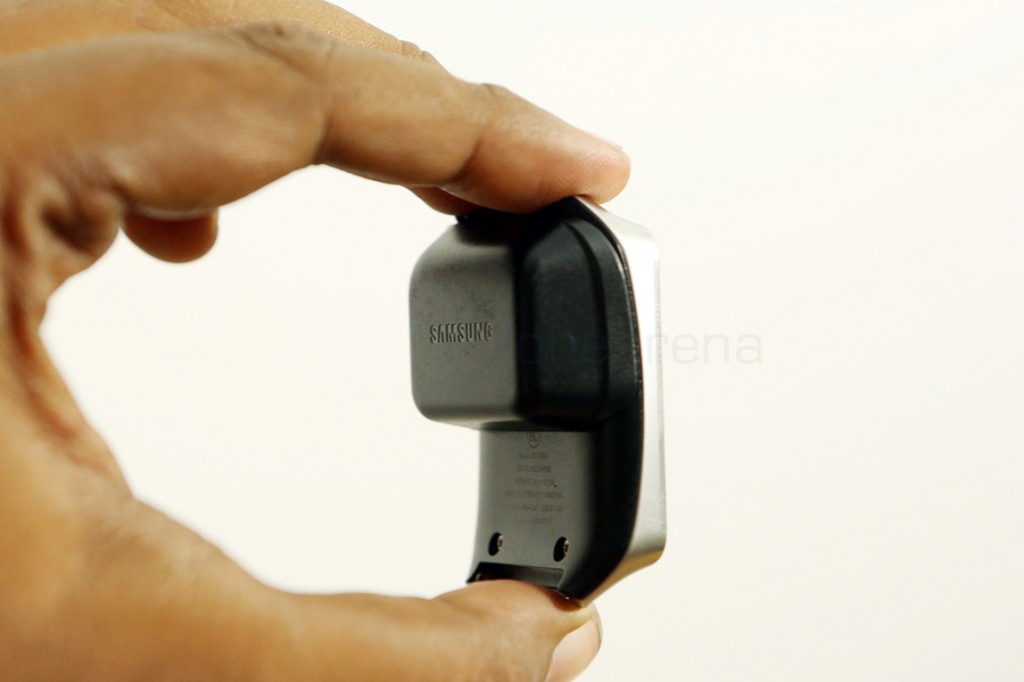 Next to display, the most important aspect of a smartwatch is the battery life. How long the battery lasts matters because this is a secondary device that you wear all the time, and one would want it to work as long as possible. The Gear Live lasts less than a day with regular usage. You’d either end up with a dead watch by the night or even before your trip back home in the evening. Either way, you have to make sure it’s charged at least two times a day. Yes, the 300 mAH battery is not powerful enough to handle the Bluetooth connectivity, the touchscreen, the display and the Snapdragon chipset inside for more than 8 to 10 hours with moderate usage. If you, like me, get messages on Whatsapp and Twitter all day, forget about the watch lasting throughout the day. However, if you are a light user and have turned off many notifications, it might last more than day but then, it defeats the purpose of the watch. 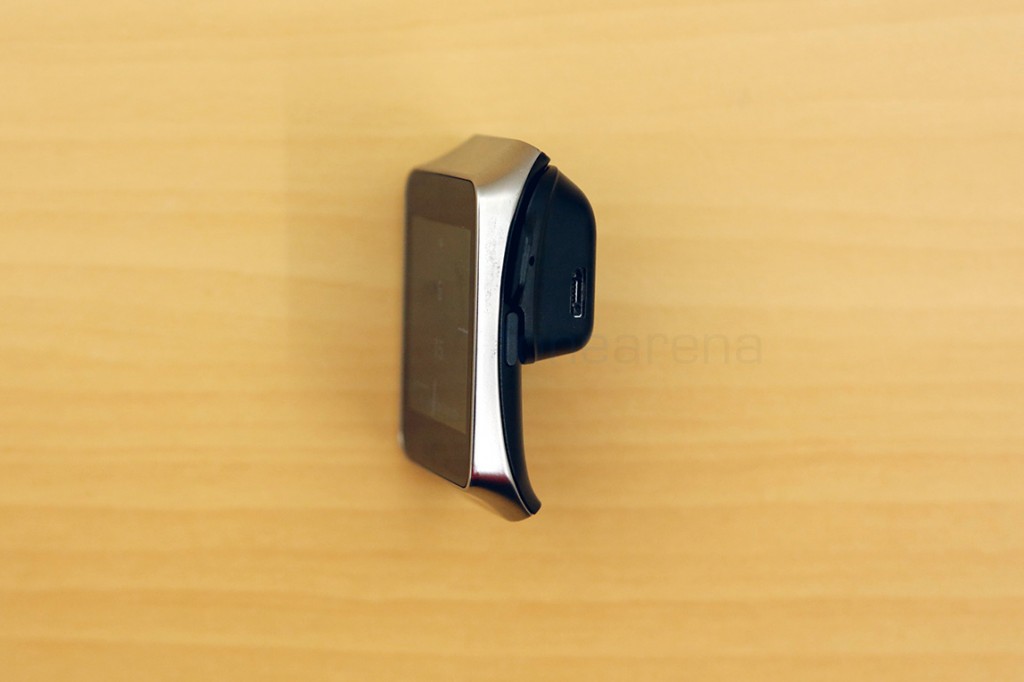 Another thing that irks us is the charging unit. A bulky plastic thing with a micro USB port sticks to the back of the watch, for charging. There is no cradle or an always-connected-to-A/C setup, you’ll have to take the small charging unit around. It’s mostly inconvenient because there are a lot of possibilities that it might get lost. If you lose it, there is no other way to charge the Gear Live, and with the number of times you charge it, the charging unit becomes indispensable in your daily kit of tech things to carry. The charging unit could have been something different, but hey, at least the watch charges fast thanks to the puny battery. 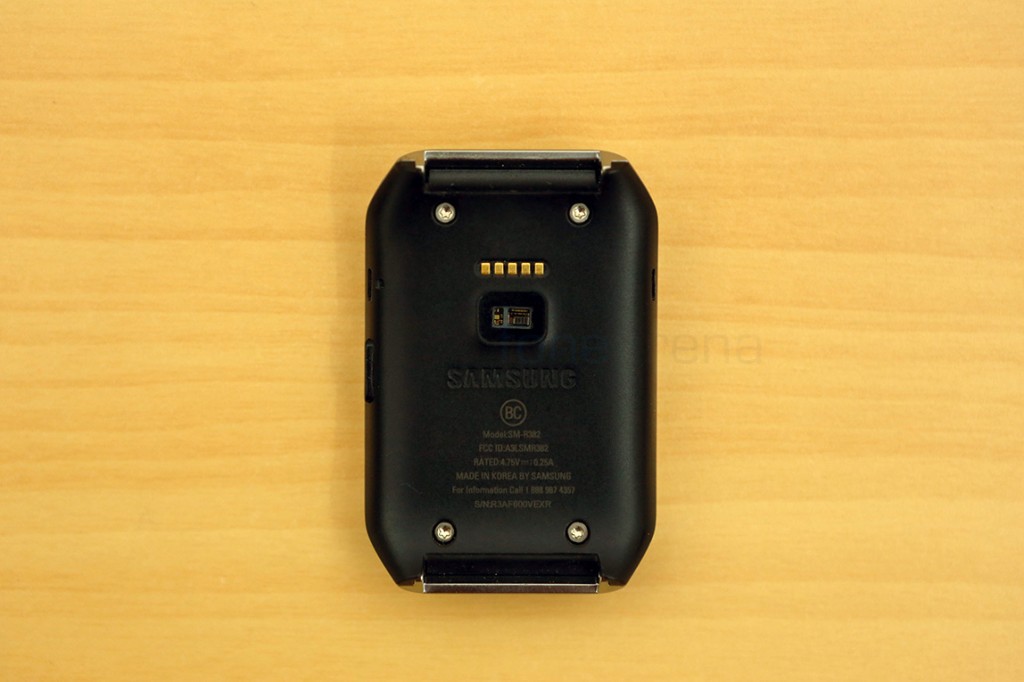 All Android Wear watches come with the same or similar specifications, mandated by Google. There is a decently sized touchscreen, there is a Snapdragon 400 processor inside, with three cores deactivated for power saving, there is 512 MB of RAM and 4 GB of internal storage. But for differentiation, at least when it came to the first set of devices running Android Wear, the Gear Live includes a heart rate sensor, apart from the usual Gyro and ambient light sensors that all the other watches feature. Samsung uses the data for its own S Health app as well as Google’s Fit, something the other Gear watches won’t do. 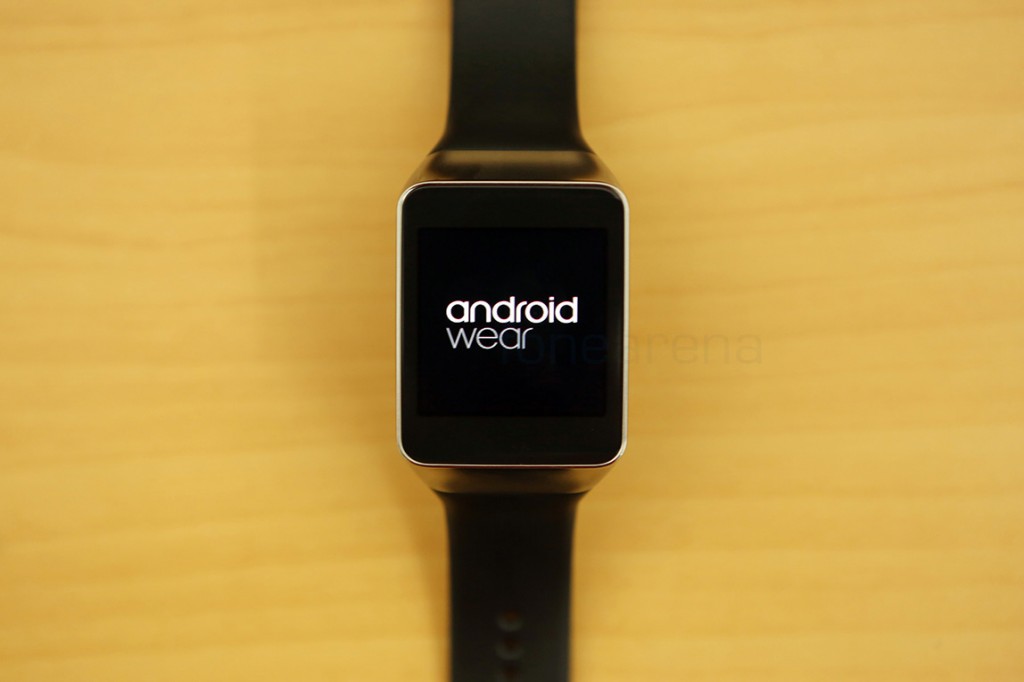 The Gear Live came into existence thanks to the new platform Google developed for wearables, called Android Wear. We had written a detailed review of the OS/platform, which aims to dominate your wrist, with hopes of replicating the success it enjoys on the smartphone side. The idea of Android Wear is to act as the window to Google Now on your wrist, augmented by the useful alerts from the phone, some of which you can immediately act upon through voice input or the through actions on the touch screen. You can respond to Hangouts or Whatsapp messages through voice or pre configured texts, which proves to be useful. You can perform most of the voice commands that you use for Google Now on the phone. 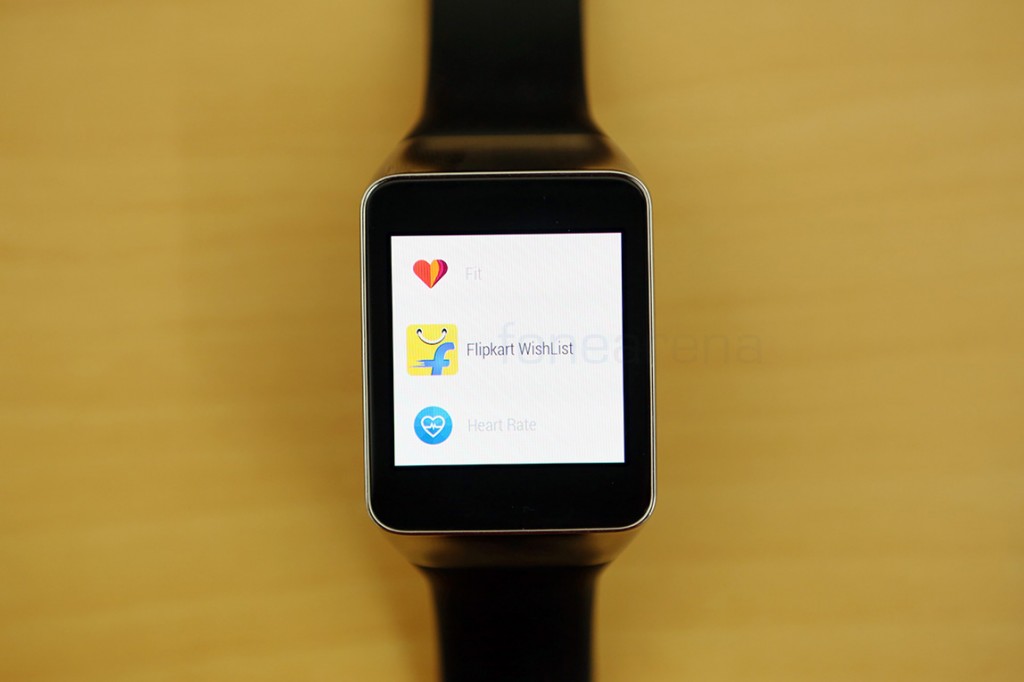 There is a growing list of apps supporting Android Wear, showing promise for the ecosystem as a whole, but the platform still has a long way to go, as we had detailed in the review. Do give it a read. Apart from these, the watch’s fitness features take the next precedence. There are some apps that take advantage of the data from the sensors, but its mostly Samsung’s or Google’s apps. The step counter can be turned on or off depending on your needs, but be sure that when you turn it on, it will count your hand shakes as a step. So, if you are looking at using the Gear Live as a fitness band, there is not much incentive to do so, but its the software that needs to improve, the hardware is already in place. 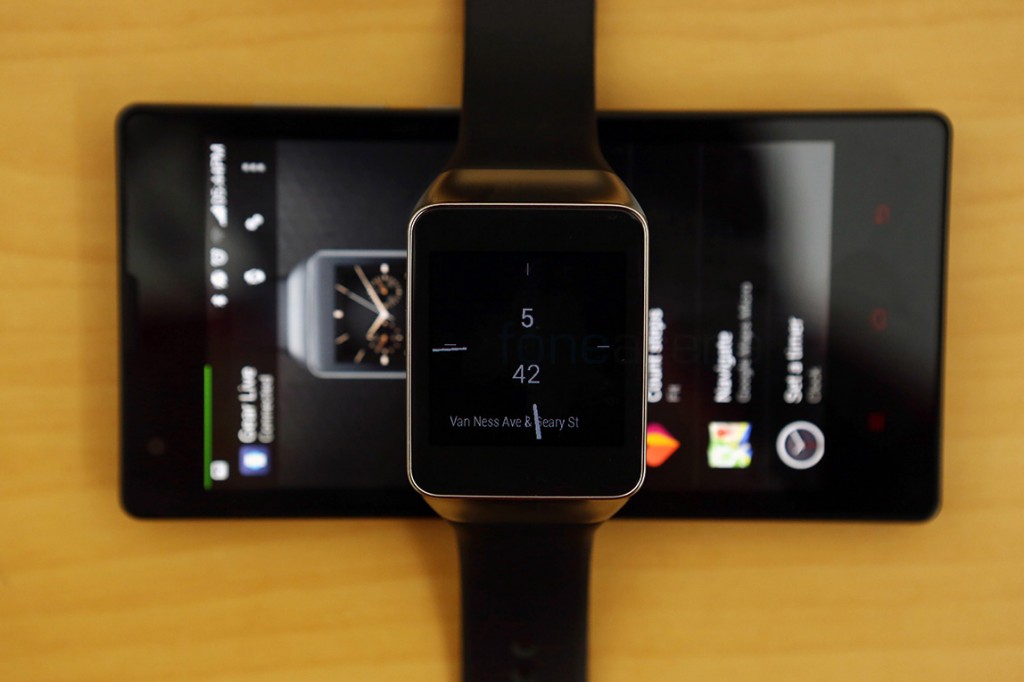 The Samsung Gear Live faces the same curse as every other Android Wear watch out there. The hardware is not up to the mark, the software is still in early stages and hence adoption is less. But even then, if you are completely into smartwatches and don’t care about using one despite battery life concerns, we would suggest other options, as the AMOLED display is most definitely a deal breaker when it comes to outdoor performance. If you are a Pebble user, you should be concerned about battery life because anything more than a day will be a miracle, to say the least. However, if you are the kind of person that wants to experiment with early technology and care only about the idea of Android Wear, the Gear Live is one of the easier choices to get in India, along with the G Watch and the Moto 360, with all of them having their own issues. If you are willing to spend more than Rs. 10,000 for a new product category, go for it, else, like most of the population, wait for better hardware.