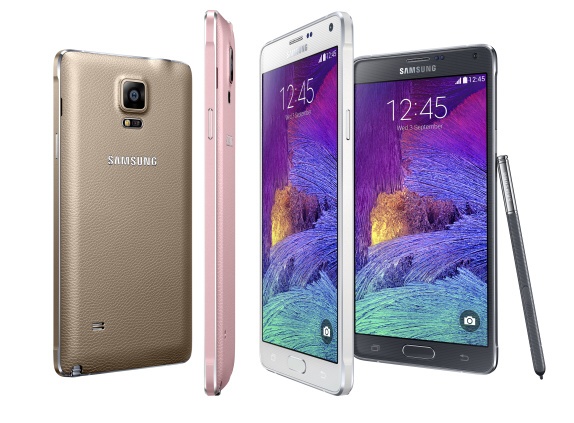 Samsung has officially taken wraps of its latest Galaxy Note flagship phablet – the Note 4 at its dedicated UNPACKED event in Berlin. The fourth generation Galaxy Note comes with a new metallic finish and brings the much need premium looks.

Samsung Galaxy Note 4 carries the same design language as that of the recently announced Galaxy Alpha. There’s an aluminium frame running around the sides of the device. The S Pen holster is etched into the right corner of the phone and the microUSB 3.0 port along with the speaker grille is located at the bottom of the device.

The company has also replaced the faux leather back that was first seen on the Galaxy Note 3, with a textured panel, which gives a premium feel in the hands. The Note 4 measures 153.5 x 78.6 x 8.5mm and weighs about 176 grams.

Samsung’s latest Galaxy Note phablet sports a 5.7-inch Super AMOLED display with a resolution of 1440 x 2560 pixels. These numbers add up to an eye watering pixel density of 515ppi. The screen is protected by a Corning Gorilla Glass, which is scratch resistant.

Under the hood in the international variant of the phablet lies a Qualcomm Snapdragon 805 chipset with quad-core 2.5GHz Krait 450 CPU, Adreno 420 GPU and whopping 3GB of RAM. The Note 4 will have 32GB of internal memory to fit in you contenct, which can further be expanded up to 64GB via microSD card.

There is an Exynos variant as well, which packs an octa-core processor with four Cortex-A57 clocked at 1.9GHz and four Cortex-A53 running at 1.3GHz, Mali-T760 GPU and 3GB of RAM. The only difference between the two models is that the Snapdragon model offers LTE Cat.6 (300Mbps) connectivity, while the Exynos version gets LTE Cat.4 (150Mbps). 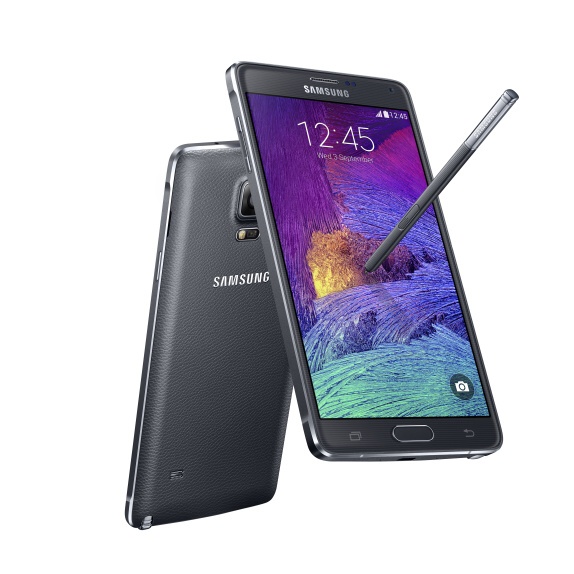 The Galaxy Note 4 features the same fingerprint scanner as that of the Galaxy S5, but with expanded functionality. In addition to screen lock, private mode authentication, Samsung and PayPal account verification, the new software brings fingerprint shortcuts that will allow users to assign applications or functions to a registered fingerprint. You can also web sign-in via the fingerprint sensor.

Samsung has redesigned the S Pen stylus that now offers better grip. The software, which accompanies the S Pen – S Note, Multi-window has been enhanced too.

Samsung has managed to retain the heart-rate monitor on its newest flagship phablet and its functionality remains largely similar to that of the one on the Galaxy S5 smartphone.

The Note 4 runs on Android 4.4.4 KitKat with the latest version of the home-backed TouchWiz UI on top.

Samsung Galaxy Note 4 is equipped with a 16 megapixel Sony IMX240 camera sensor with optical image stabilization and dual-LED flash. The module is the same as that of the one on the Galaxy S5 LTE-A.

The rear camera is capable of capturing 4K UHD videos at 30fps. The shooter has the ability to shoot in various modes and houses features like dual-shot, simultaneous HD video and image recording, geo-tagging, touch focus, face and smile detection, image stabilization, panorama and HDR. 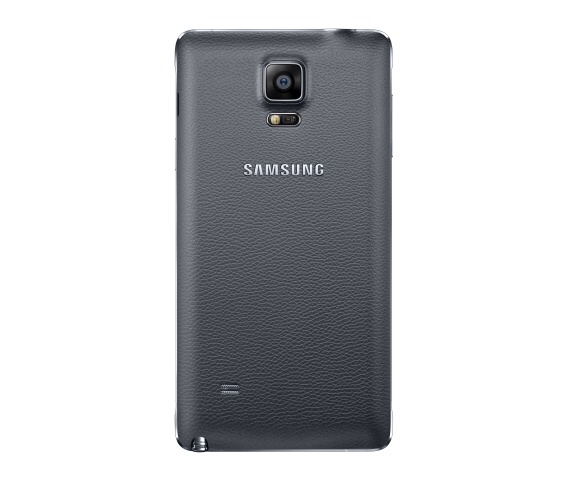 Apart from these, the company is stuffing the camera with a new option called Side Touch along with a gesture based method to active the snapper with the screen off. The Side Touch will act as an invisible camera button with the help of the built-in sensors.

The software tricks don’t end here. There are four new camera modes – Wide Selfie, Selfie, Selfie Alarm and Create a GIF file option. All these features are packed in a familiar Samsung interface.

Samsung has also bummed the resolution and the capabilities of its front facing camera. The Note 4 comes with a 3.7 megapixel sensor, which is capable of shooting images and videos in WQHD resolution (2560 x 1440 pixels).

The juice of the Galaxy Note 4 is provided by a 3,220 mAh battery, which according to the company will help you last an entire day without any hassle. You can also add an optional Qi wireless charging panel if you wish to do so.

Samsung Galaxy Note 4 will be available, starting from October and there is no official word on the pricing just yet. The phablet will up for grabs in frosted white, charcoal black, bronze gold and blossom pink color options.