As announced earlier, Samsung and Barnes and Noble have unveiled their first co-branded Nook tablet. Dubbed as Galaxy Tab 4 Nook Tablet, it has  a 7-inch HD display with 1280 x 720 pixel resolution screen and is powered by a 1.2GHz quad-core processor. 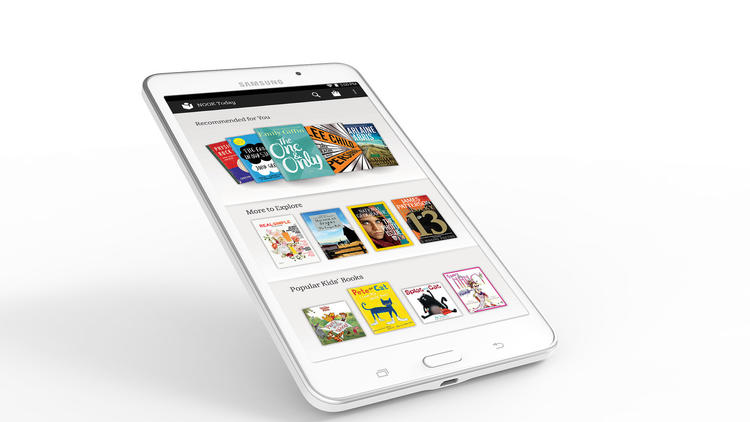 Priced at $179, the tablet has 1.5 GB RAM and 8GB internal storage and support for micro SD card upto 32GB. Other specs that are similar to the existing Galaxy Tab 4 Nook include 3MP rear and 1.3MP front facing camera, WiFi, Bluetooth Android KitKat 4.4. The battery life is claimed at 10 hours for general use.

Similar to earlier Nook devices the Galaxy Tab 4 Nook will feature a “Nook Shop” app offering access to books, TV shows, movies, magazines and apps. Barnes and Noble will also be offering “$200 in free content” with the purchase of the new Nook device, including eBooks. Complimentary content will continue to be made available on an ongoing basis through Barnes & Noble’s “Free Fridays” program, offering Nook books, videos or apps every week.

Both the companies are targeting Amazon’s range of Kindle Fire tablets. The Galaxy Tab 4 Nook is $50 more than the entry-level Amazon Kindle Fire but a little cheaper than the Kindle Fire HD. Barnes & Noble entered the hardware business in 2011 with the launch of its first Nook, which was a black-and-white e-reader designed to compete with Amazon’s popular book-focused Kindle.

The Samsung Galaxy Tab 4 NOOK is now available in white and black colors in more than 660 Barnes & Noble bookstores and online at www.bn.com and www.nook.com.