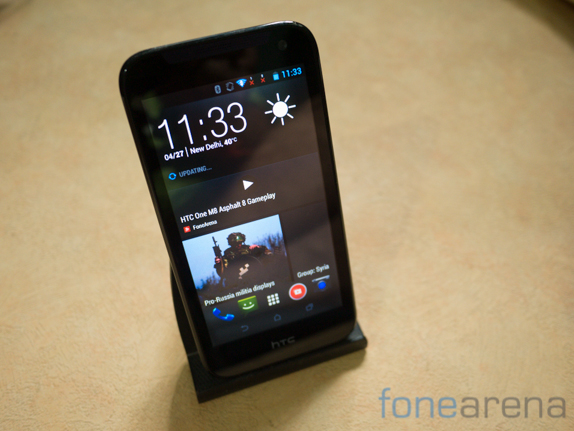 HTC has had a troubling past few quarters with well reviewed devices that haven’t really caught the consumer’s eye. In the upper end of the segment, we’ve seen HTC’s new One M8 that incorporates cutting edge design and materials to create the perfect flagship. However it is sales in the volume segment ie the entry level that can help revive the flailing smartphone giant. The Desire 310 aims to be exactly that device as it aims to combine a good experience with an enticing price point. Does it succeed? Read on to find out.

Where the M7 and M8 shattered the boundaries of what was possible with smartphone design, the Desire 310 is the polar opposite. The phone is as pedestrian as they come in terms of looks and it appears that HTC hasn’t even attempted to make it stand out amongst the competition. 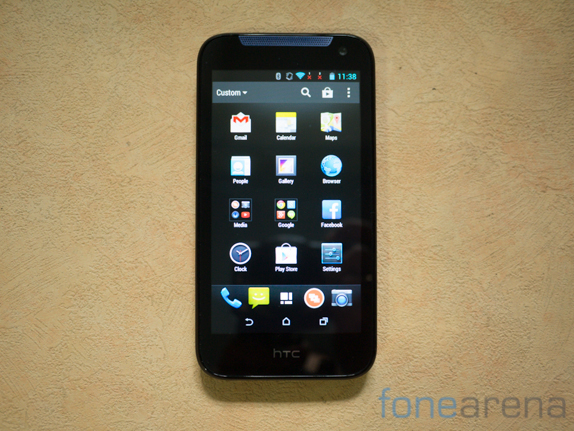 The phone has a front design that is basically just the display and elements included above the screen. An HTC logo can be seen below the 4.5 inch panel. There are no capacitive buttons here as the phone makes use of onscreen controls. Up top, things are kept slightly fresh by including an earpiece grille in a shade of blue that complements the black of the rest of the front.

The port selection on the Desire 310 is bog standard with the right side of the phone opting for the power key, volume rocker. At the top is the 3.5mm audio jack and micro USB port. The left and bottom edges are left clean. 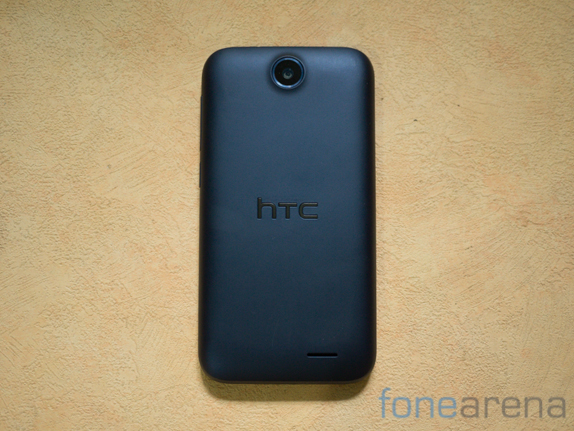 Measuring 132.4 x 68 x 11.3 mm and weighing in at 140 grams, the phone is small enough to slip into most pockets and light enough to remain inconspicuous. The back of the phone is very clean with just a HTC logo engraved into the back panel and a camera module towards the top. We’re quite happy with the choice of materials used in the handset as the device hardly catches any fingerprints at all. The back of the phone sits well in the hand and the soft touch plastic feels great. Overall, the phone is good mix of perfectly average looks and above average ergonomics.

The HTC Desire 310 runs a cut down version of Sense UI 5.1. It gets the same basic interface as most high end HTC devices and we’re very happy to see how well it translates to lower end hardware as well. 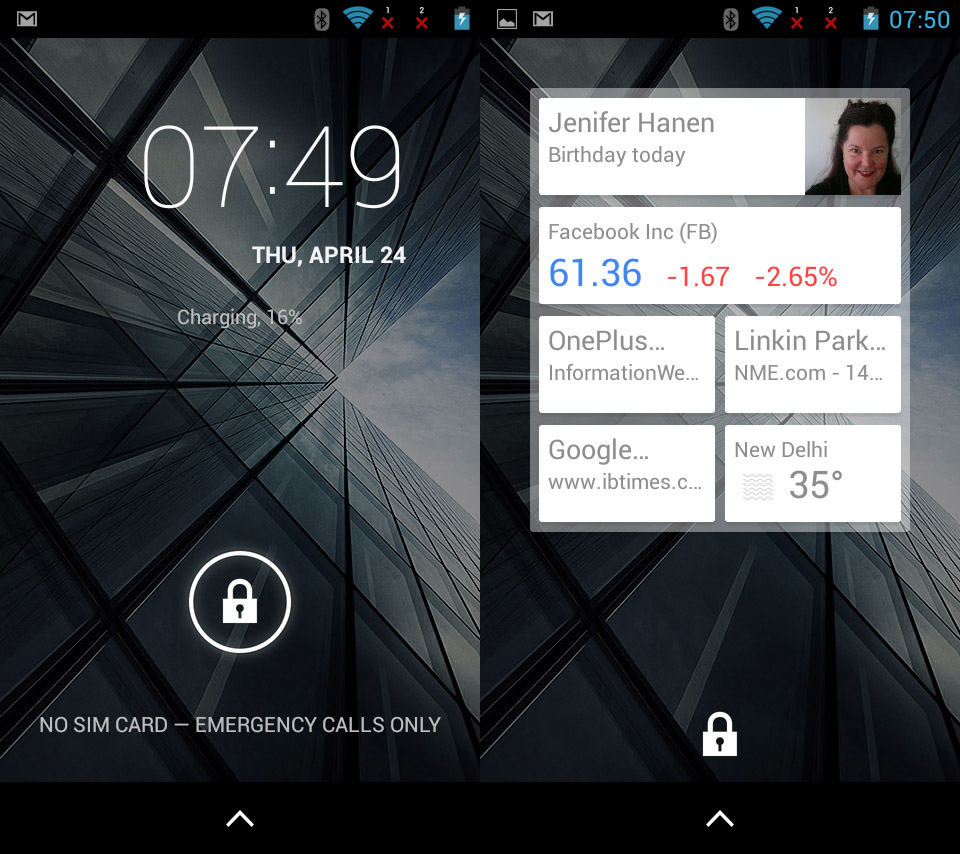 Under the hood is Android 4.2.2 so there’s not many surprises on the software front. The lockscreen is standard HTC affair with it being possible to scroll over to lockscreen widgets on the side. 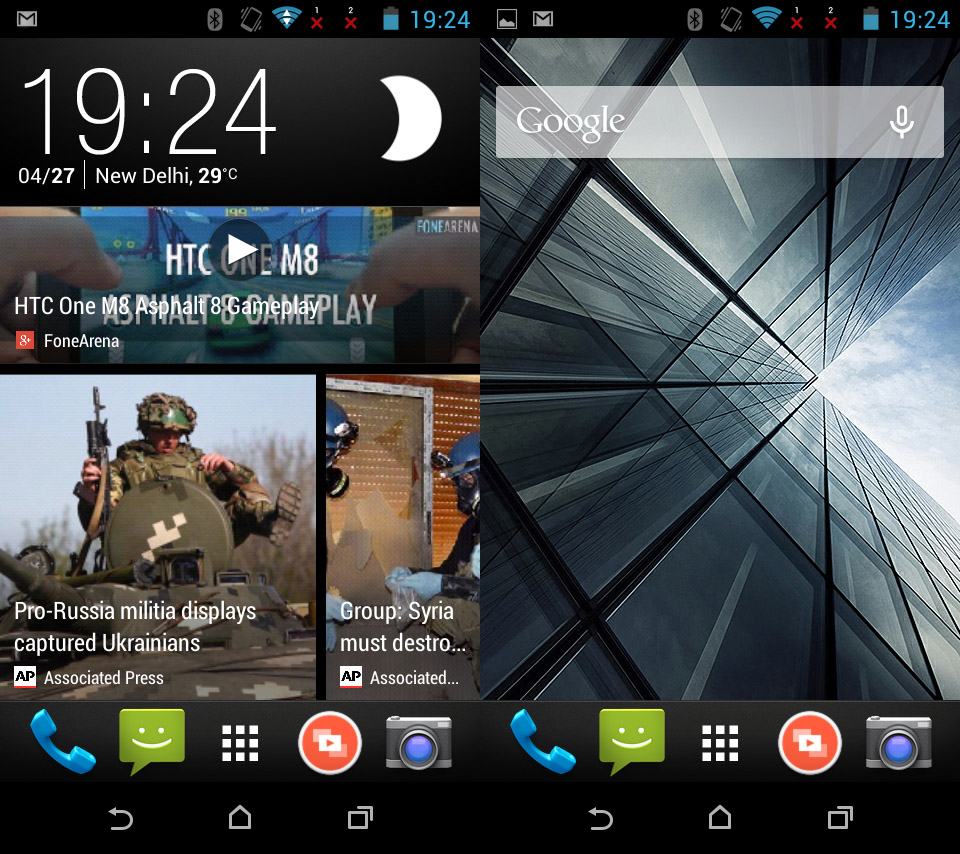 Moving on to the homescreen, users get access to a 4×4 grid of icons with a row of quick access buttons at the bottom. Since the device lacks capacitive buttons, you’ll have to deal with onscreen controls. These buttons slide away when viewing multimedia content to maximize screen space. The phone also gets Blinkfeed which lets you scroll through a curated news feed or your social channels right there on the homescreen. 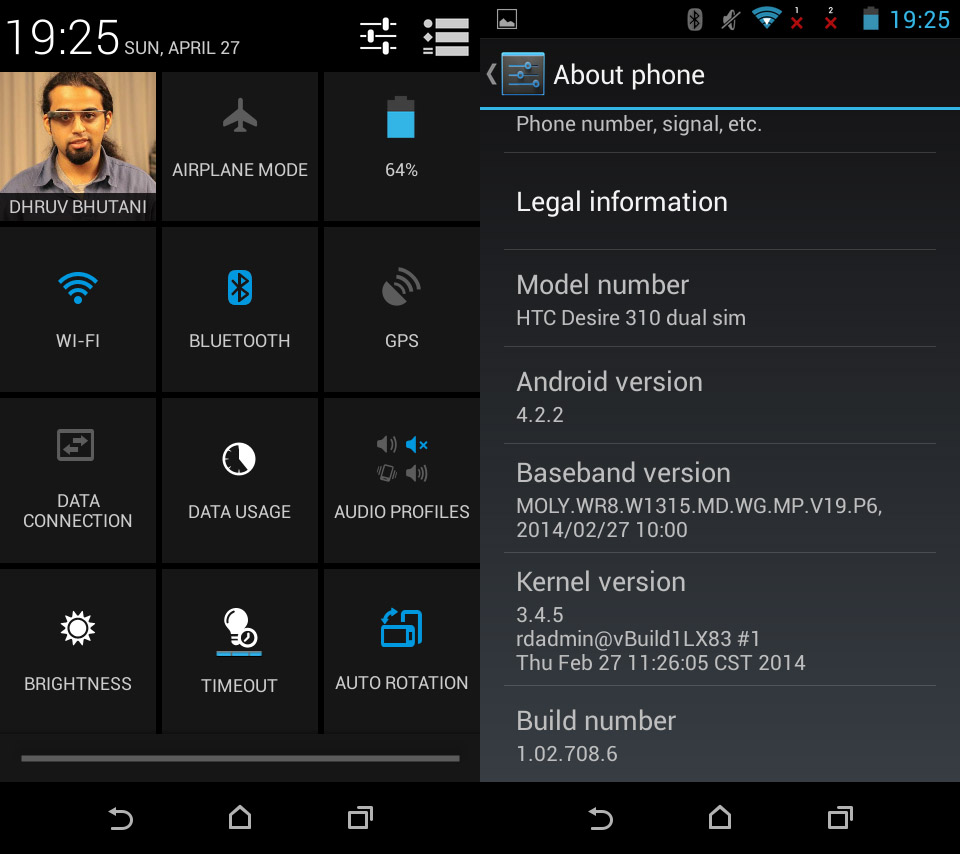 All in all there is little to complain about the software on the Desire 310. The phone ships with minimal bloatware with only WeChat, Facebook and Polaris Office making the cut. We’d argue that at least Facebook and the Office application warrants a place on the phone. Customization options abound and you can select the grid size in the app drawer in case you want to a more information dense view.

Powering the HTC Desire 310 is a 1.3Ghz Mediatek MT6582M processor paired with 512MB of RAM. The quad core processor proves to be powerful enough for average usage. In fact the phone remains positively smooth throughout the interface.  There are occasional lags while browsing multimedia rich websites but overall, the Cortex A7 processor manages to hold its own. 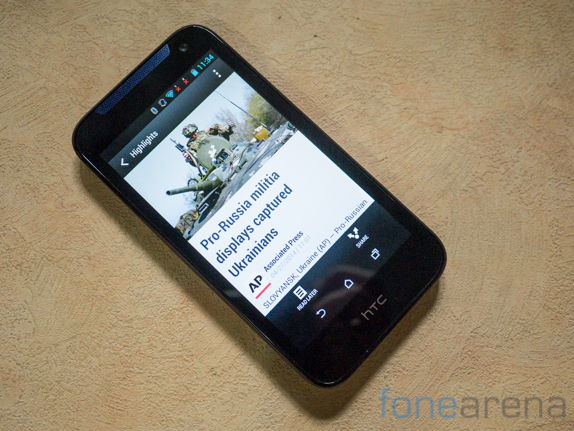 The GPU on the HTC Desire 310 is a Mali 400MP2 unit. While not exactly high end, it lets you play most modern games at a decent clip. We can’t vouch for how future proof it’ll prove to be but you should be able to play most current generation games without a hitch. We’ve included benchmark scores below, as expected with this being an entry – mid level device, it won’t  be setting any records for sure. 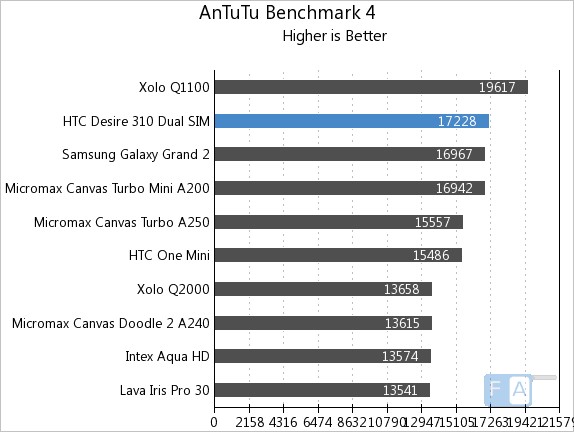 The AnTuTu benchmark works well to give you an overall score of the general performance of a device.The HTC Desire 310 performed well enough to rank amongst the top devices in its category. 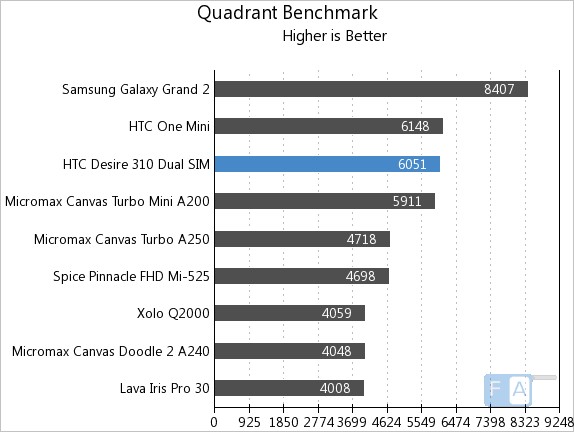 Similar to AnTuTu, the Quadrant benchmark gives a score for general performance, RAM bandwidth and basic GPU performance. The phone performs better than a lot of the competition and ranks amongst the top three devices though the Grand 2 handily outpaces it. 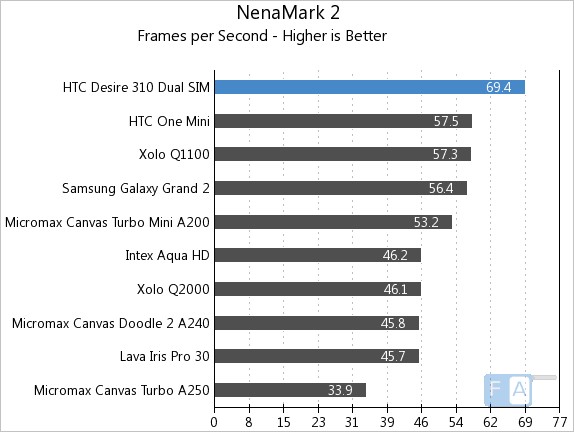 The HTC Desire 310 ranks well above the competition in the GPU centric Nenamark 2 benchmark. The phone managed 69.4 FPS which places it ahead of it’s stable mate ie the HTC One Mini which topped off at 57.5 FPS.

The display on the HTC Desire is a 4.5 inch TFT panel with resolution of 480 x 854. Since the phone lacks physical capacitive buttons, a portion of the screen is used for rendering onscreen controls. The pixel density is 218ppi which is well below average. Most of the competition is now using 720p displays at least and this is definitely an area of concern. 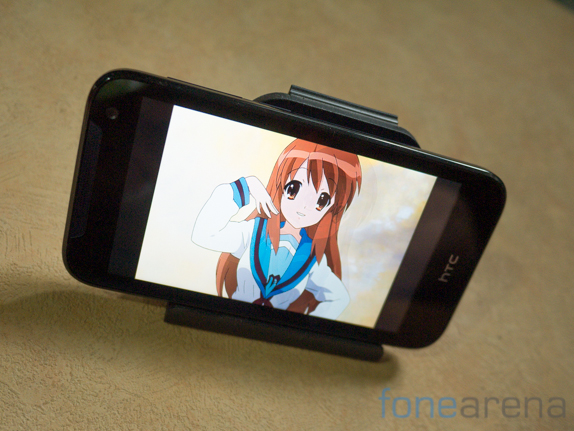 However its not just the resolution that is at fault here. Color rendition on the phone while being somewhat accurate, it isn’t really vibrant at all. Brightness levels too are far from satisfactory. Even when cranked up high, the display is hardly visible outdoors. HTC would have done well to include a higher quality panel here.

The camera on the Desire 310 proved to be another pain point for us. The 5MP camera unit lacks auto focus altogether which makes it useless for quite a few usage scenarios.You can forget about taking close up shots of documents, flowers or any such object. The lack of an LED flash also means that you won’t be doing any low light photography on this device. 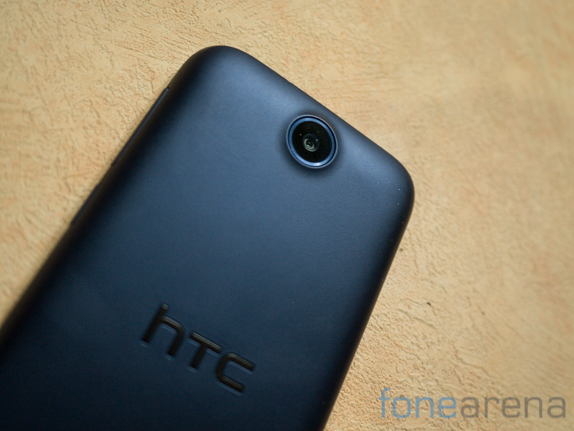 Coming on to actual usage, you’ll notice that shots are generally noisy with extreme compression artifacts. There is a distinct lack of dynamic range and a very pronounced softness in the shots. 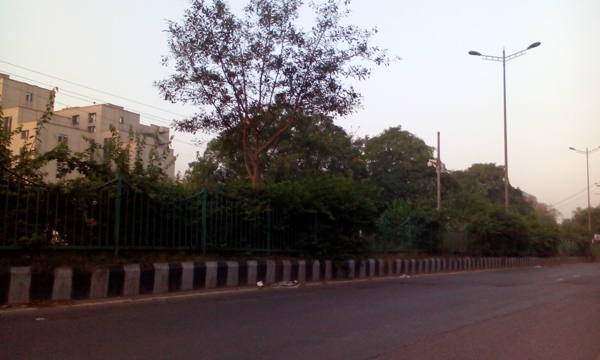 The above photo samples should give you a good idea of what to expect in terms of camera performance. The images are noisy, have a distinct coloration and softness to them that makes them almost unusable. The lack of autofocus definitely hurts when shooting macros.

Battery life is one area where we were definitely impressed with the HTC Desire 310. Despite being just a 2,000 mAh unit when paired with the rather modest internals, the phone easily manages to deliver well over a day of usage time. Even when stressed with constant usage, you’ll be hardpressed to achieve less than a day of usage out the phone. 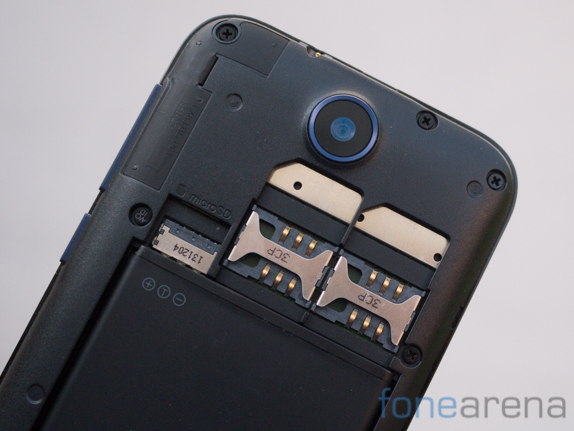 The HTC Desire 310 can best be summed up as a work horse. Its not the best looking or the most feature packed phone in its category but it is a reliable phone that’ll get you through a work day while still leaving enough power to take it along for an evening out as well. Performance is consistently good enough to be able to do almost anything you desire of it. 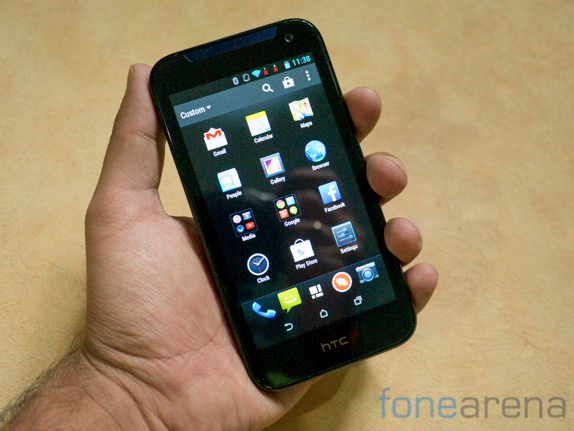 Where the phone does lack is in its multimedia creds. The camera is borderline useless and the display isn’t particularly good either as we mentioned earlier. Should you go for the HTC Desire 310? We think that you should give the slightly more expensive Moto G a long, hard look but if that is priced out of your budget, the Desire 310 would make for a decent second choice.