With an aim to encourage Indian users to vote in the upcoming Lok Sabha Elections 2014, Facebook has added a “I’m a Voter” button. Indian users will see a reminder message about voting on the polling day depending on once locations at the the top of their New Feed. The “I’m a Voter” button will be present next to the reminder message and both these features will be available on Facebook mobile apps on polling day. 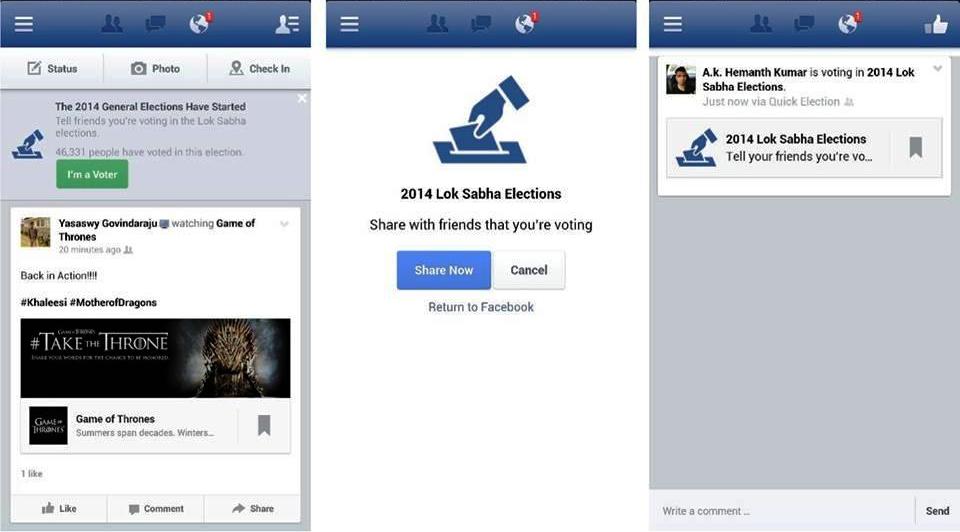 Users above 18 can click the “I’m a Voter” button to a publish a story on their timeline thereby motivating their friends and relatives to also cast their vote.

This is not the first time Facebook is launching an initiative to encourage youth about voting. The social network had launched “Register to Vote” feature in 2013 that was aimed at first time voters. Meanwhile, Facebook like other social media has been a platform for political parties and leaders for the upcoming election.

In February, Facebook had launched Election Tracker App that allows you to view the most discussed politicians and political parties on the social network. It also launched Talks Live in March that let Indian users to directly ask questions to some key national and regional political.

Earlier this week Hike Messenger launched a political sticker pack for the upcoming election while car rental service Uber announced that it would offer free rides during polling hours (7am-7pm) on polling day. Social Media and mobile messaging apps have definitely helped create a wide buzz about the Lok Sabha 2014 elections In fact, a latest report from IAMAI and IMRB touted that social media influence may swing 3-4 percent votes.