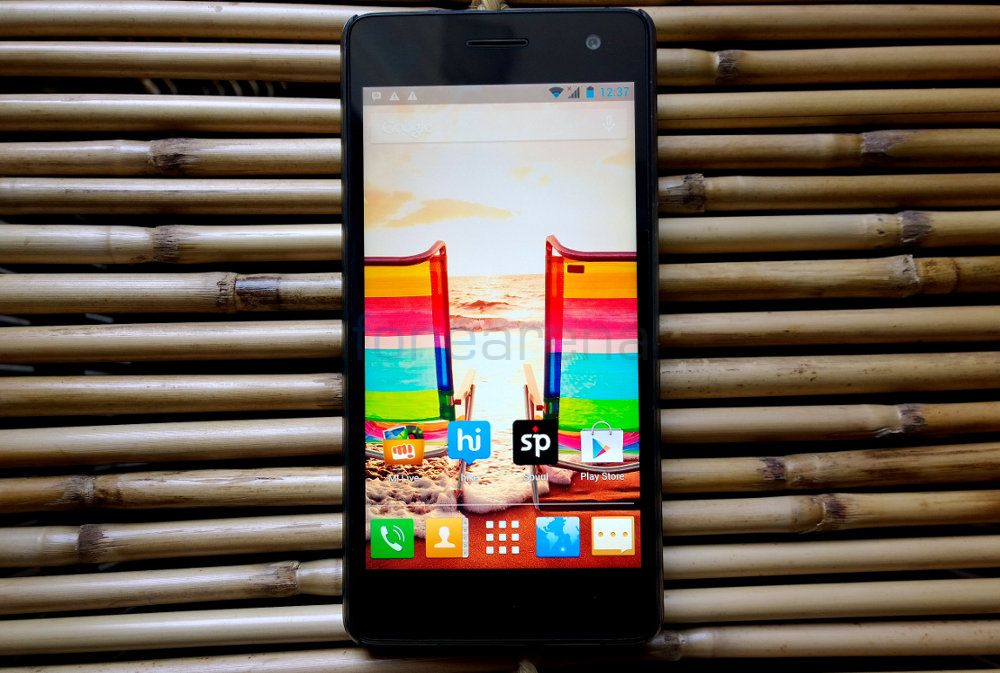 Micromax launched the Canvas Knight A350 as the successor to last year’s Canvas Turbo A250. Even though this features the same 5-inch 1080p display, 2GB RAM and runs on Android 4.2 (Jelly Bean), the Canvas Knight is powered by a more powerful 2GHz octa-core processor, features a 16-megapixel rear camera and also has a 8-megapixel front-facing camera. Is this better than the Canvas Turbo ? Let us find out in the complete review. 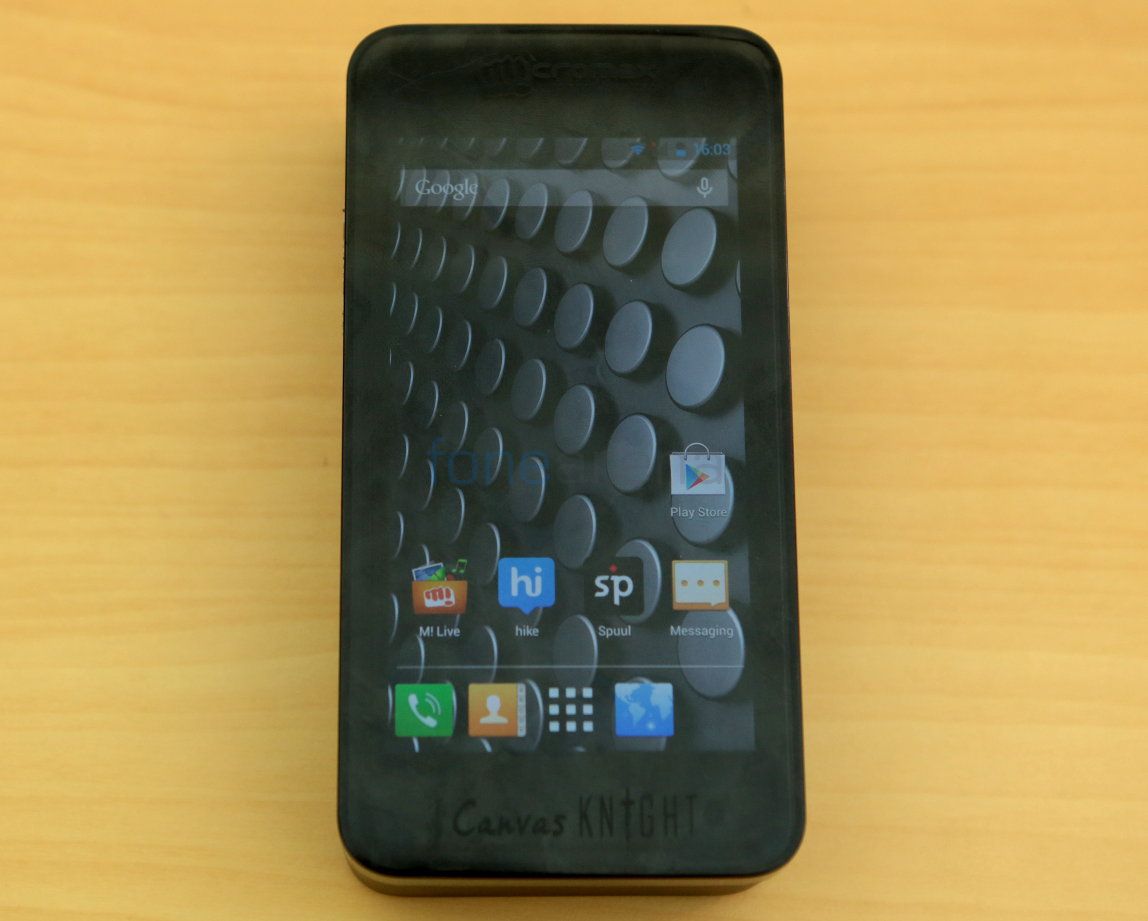 We unboxed the smartphone earlier this month, check out the Micromax Canvas Knight unboxing 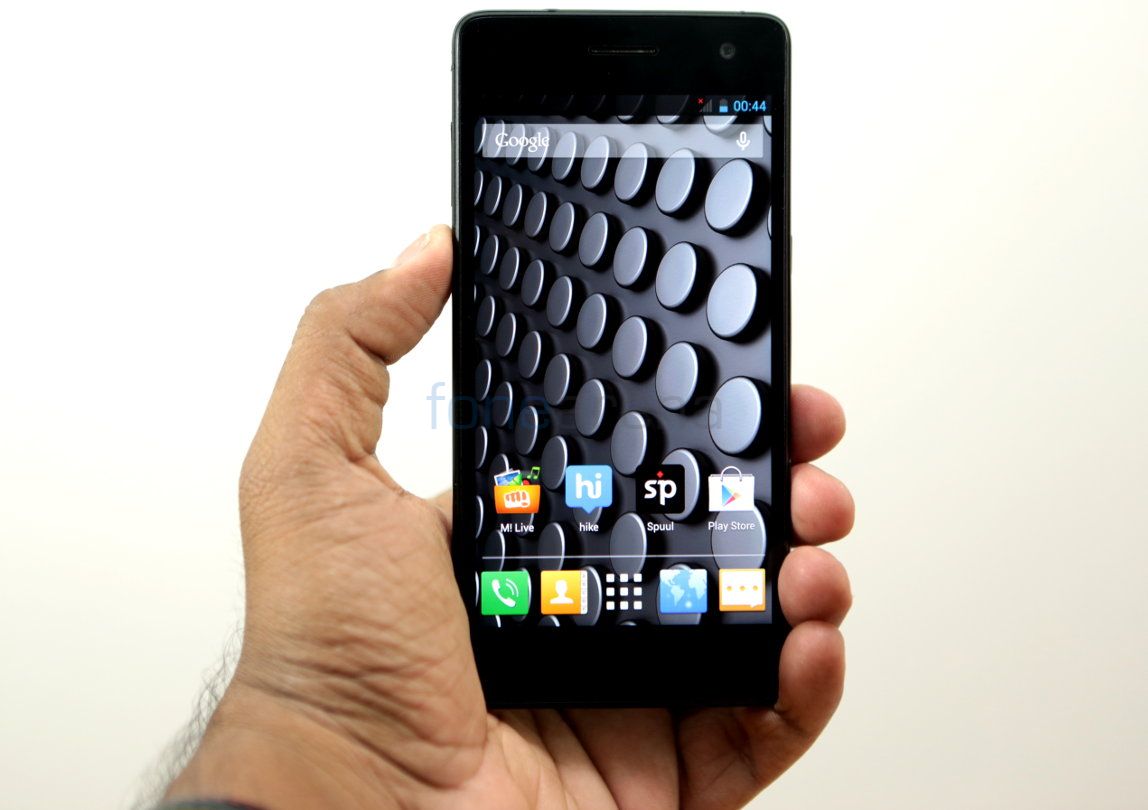 The Canvas Turbo had a metal build, but the Canvas Knight has a metal frame with glass back. The build quality is solid and it feels premium. The 5-inch (1920 x 1080 pixels) IPS display is bright, has good viewing angles, offers vibrant colors and the sunlight legibility is good too. The display is glossy, hence it becomes a fingerprint magnet. Since the phone has bezels above and below the display, the phone is tall, even though it has a 5-inch screen. Overall this is one of the best displays we have seen on smartphones in this price range after the Lava Iris Pro 30. 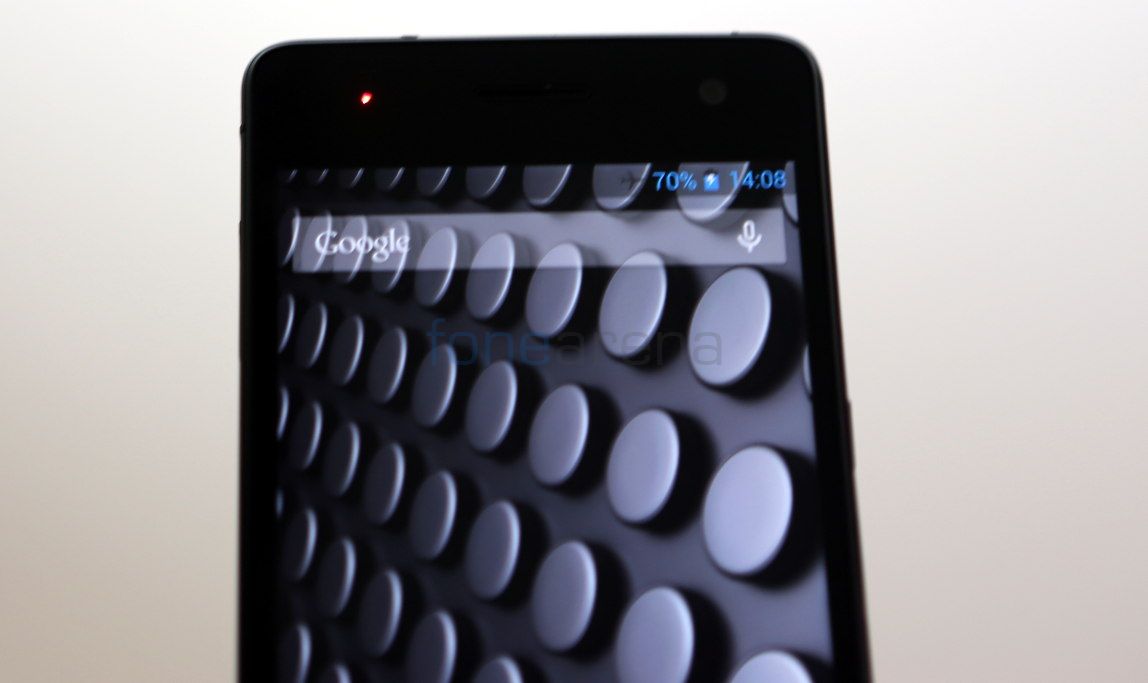 On the top there are the usual set of proximity and ambient light sensors. There is a 8-megapixel fixed-focus front-facing camera, but it can record videos only at VGA resolution, similar to octa-core MediaTek powered phones. It also has a LED notification light next to the earpiece. The capacitive touch buttons for menu, home and back are present below the display. These are backlit and offer haptic feedback. 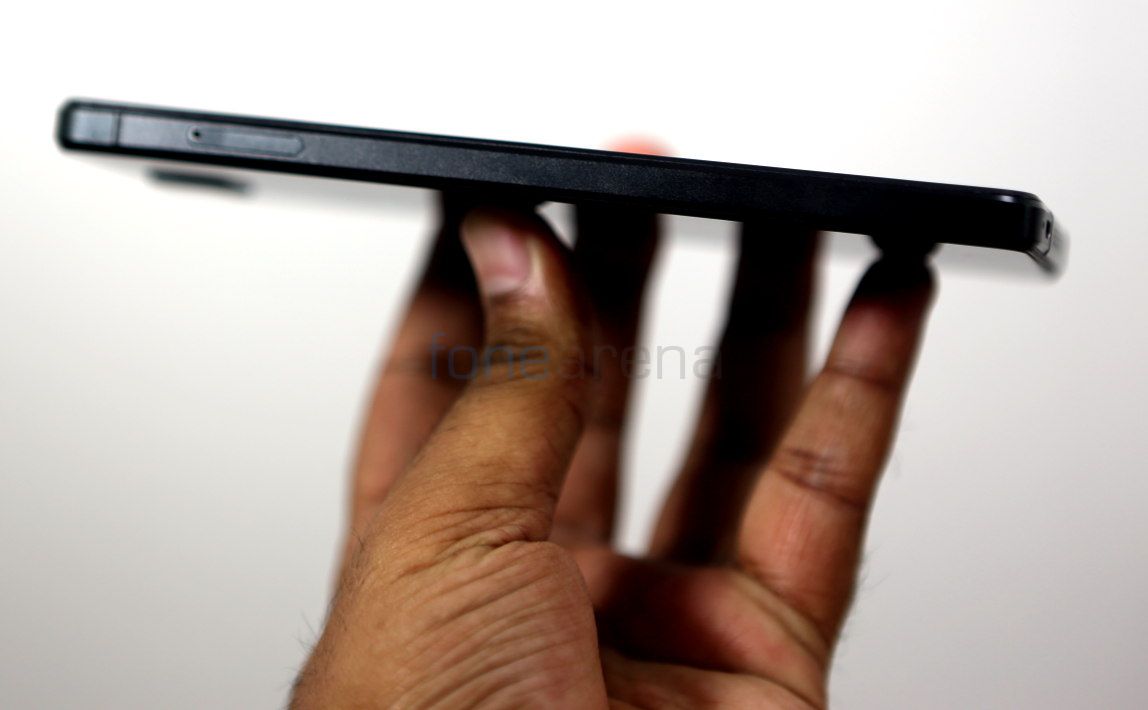 The primary micro SIM slot is present on the left side. Since the sides have brushed metal finish, it is not slippery when you are holding the phone. 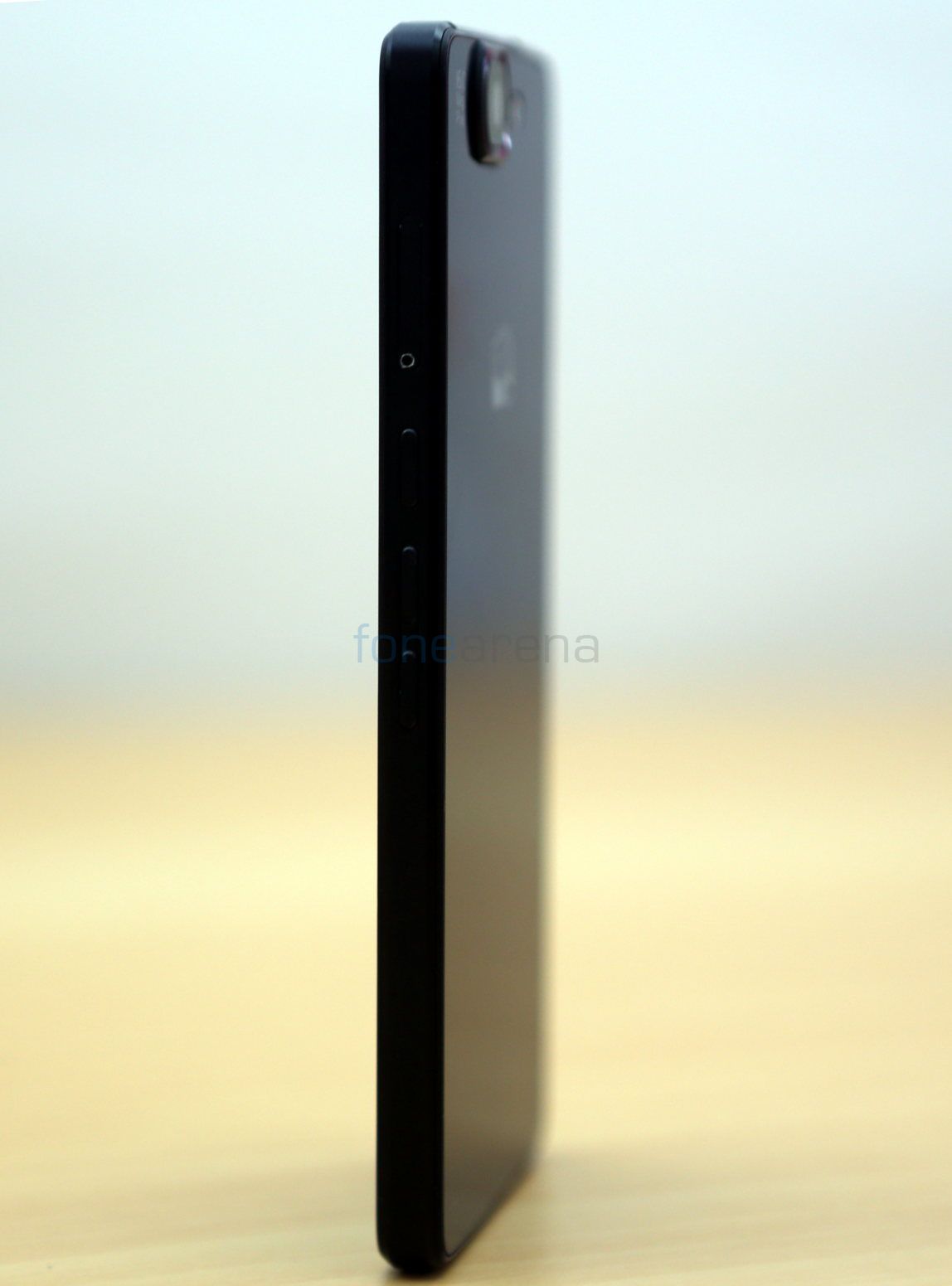 On the right side there is a secondary micro SIM slot. Both the SIM slots have trays made of metal. Below that there is a power button and volume rockers. Since the power button is present on the sides it is easy to access when holding the phone. These hardware buttons too have metal finish. The phone is about 7.8 mm thick, bit thinner than the Canvas Turbo. 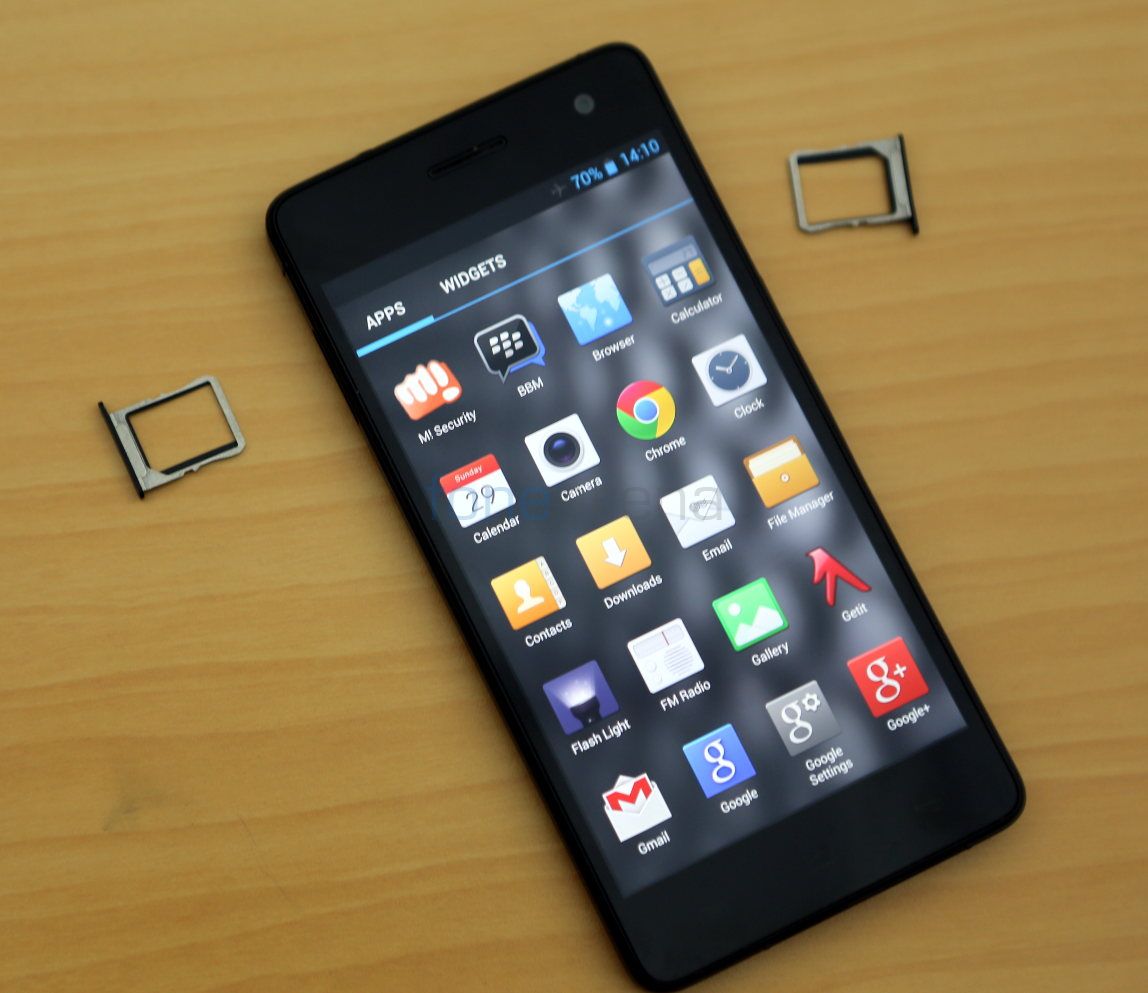 You can easily remove the trays with the help of bundled SIM ejector tool. 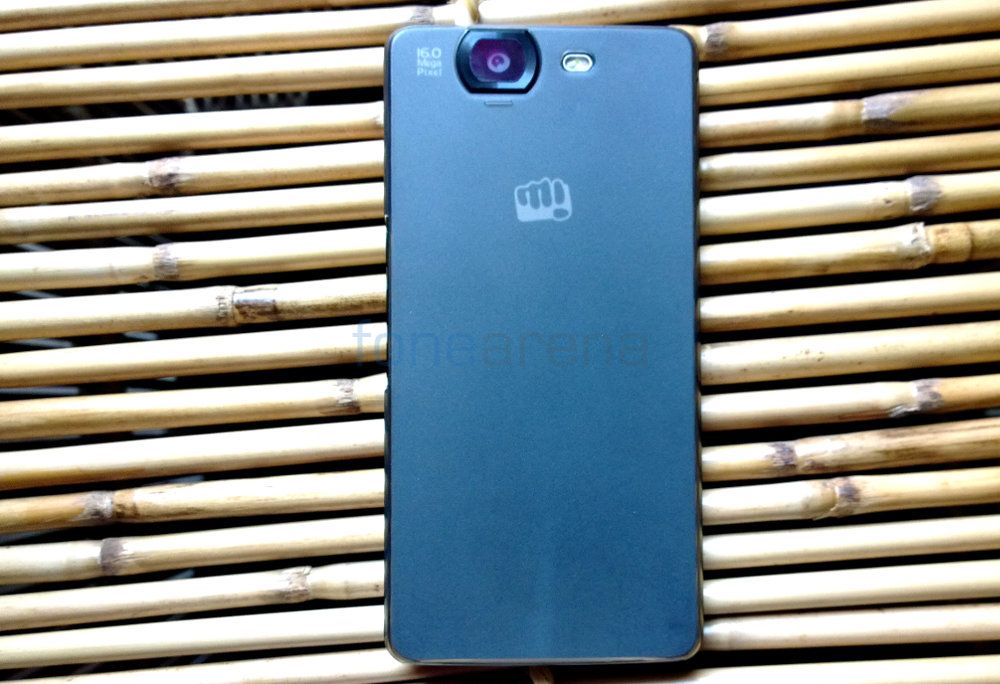 The Canvas Knight comes in Black, White with Gold and Black with Gold colors. Since all variants have black bezel on the front, the color difference is only seen on the sides and back. We have the black colored phone, so the phone is completely black. It weighs about 156 grams, almost similar to the Canvas 4, but it is slightly heavier than the Canvas Turbo. 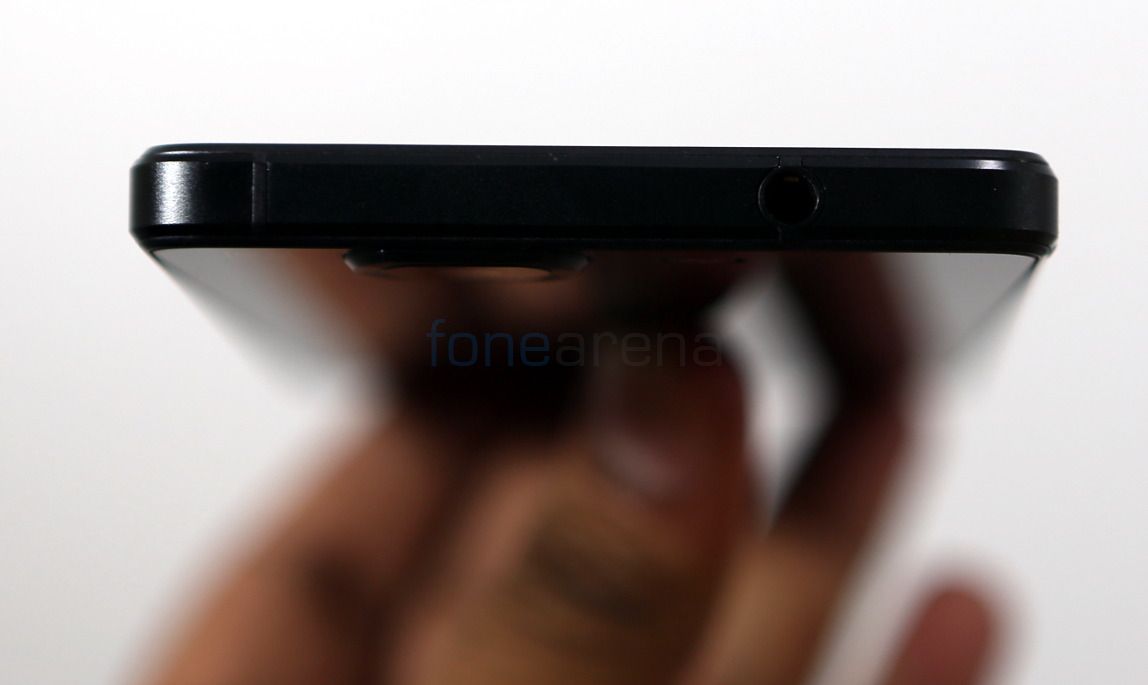 There is a 3.5mm audio jack on the top. As you can see, the sides of the phone have curved finish. 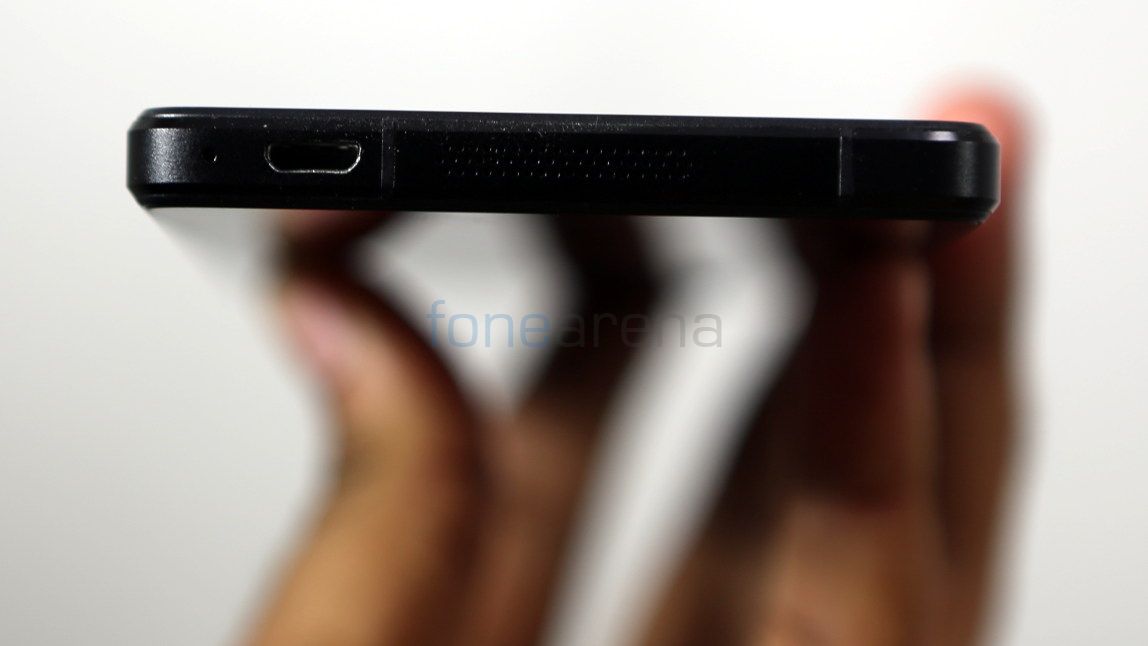 The micro USB slot is present on the bottom along with a tiny microphone hole and a large loudspeaker grill. 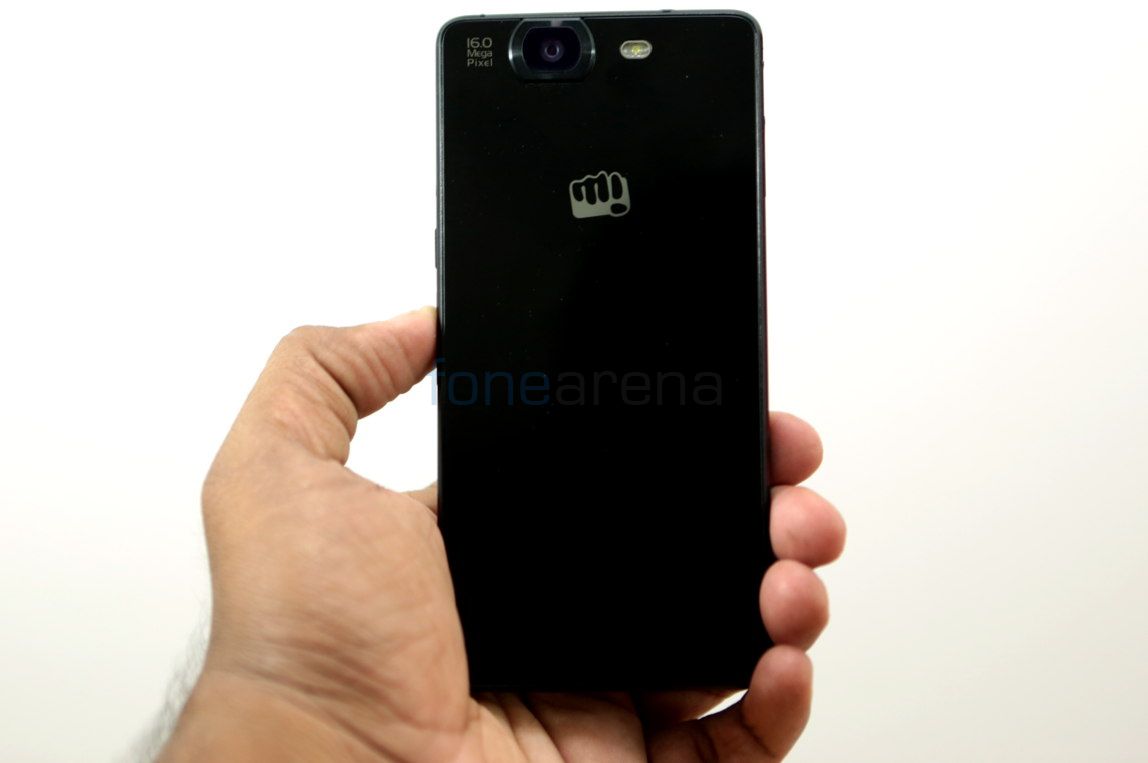 On the back there is a large 16-megapixel camera sensor with LED flash. Even though the camera module is present in a housing, there are chances it might get scratched when you place the phone on a rough surface. Since the back has a shiny glass finish, it is a bit slippery and is prone to fingerprints. 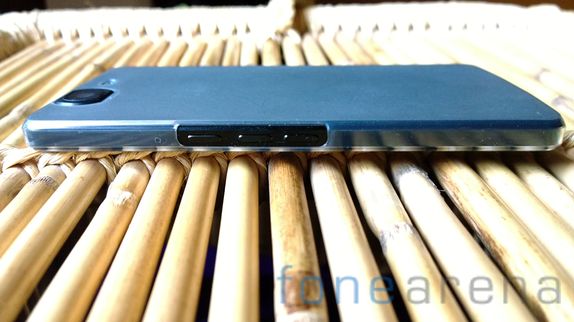 The phone comes with a protective cover that covers the sides and the back of the phone. 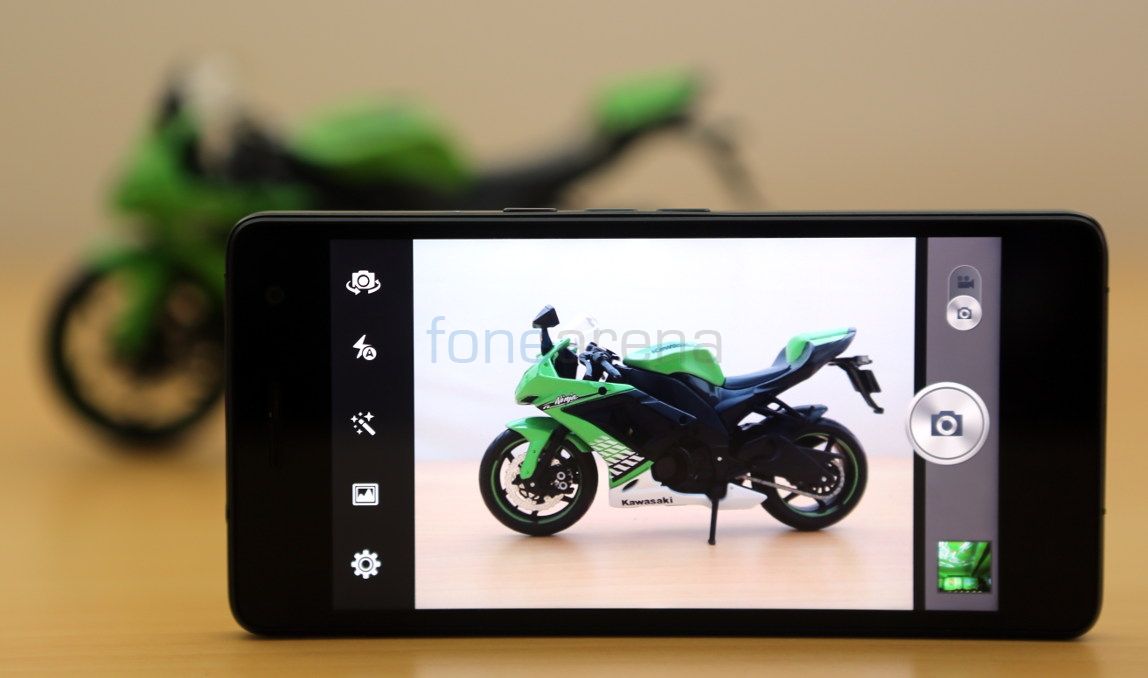 The Canvas Knight has a 16-megapixel camera module with 1/2.3″ OmniVision BSI 2 sensor, M8 Largan Lens and f/2.2 aperture. The UI is similar to the Intex Aqua Octa and the iberry Auxus Nuclea N2, powered by the same octa-core MediaTek chip. Additionally it has GIF Animation, 3D panorama (similar to the Google Sphere) and Object Removal, to remove a moving object by taking burst shots. These features were present on the Canvas Turbo. It also has voice control that captures images with voice commands (cheese or capture), but it did not work for us.

Images in the daylight were dull, washed out and also had noise. Macro shots were decent and the focus was pretty good. Low-light shots had a lot of color noise with some white balance issues. HDR shots were decent, but it was too sharp. Overall the camera is just average. Check out some camera samples.

Check out the full resolution camera samples from the Canvas Knight here.

It can record videos at 1080p full HD resolution at 30 fps. It can focus quickly, but the video was too sharp and not up to the mark. Since the phone lacks a secondary microphone audio is not crisp. It has Electronic image stabilization (EIS) that uses software enhancements to minimize blurring and device shake.Check out the full HD video sample below.

You can check out the camera review of the Micromax Canvas Knight A350 to know more about the phone’s camera in detail. 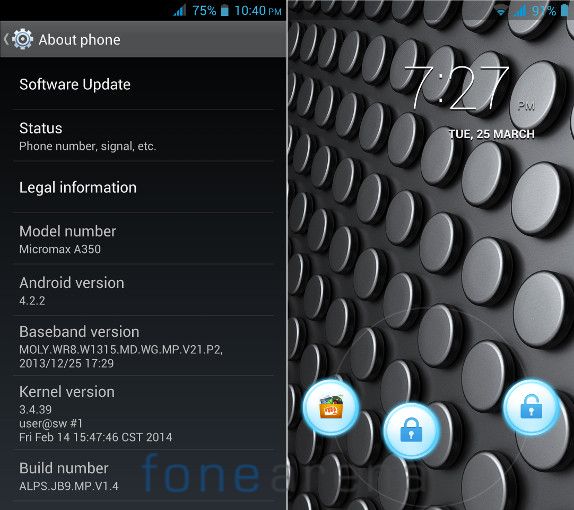 The phone runs on Android 4.2.2 Jelly Bean, compared to Android 4.2.1 on the Canvas 4 and Canvas Turbo. It support 9 homescreens and the lock screen has shortcut to go to M! Live app directly. This shortcut cannot be changed. Otherwise the UI is almost stock with lockscreen widgets and option to quickly launch the camera directly from the lock screen. Quick settings has couple of extra toggles for reboot and wireless display. 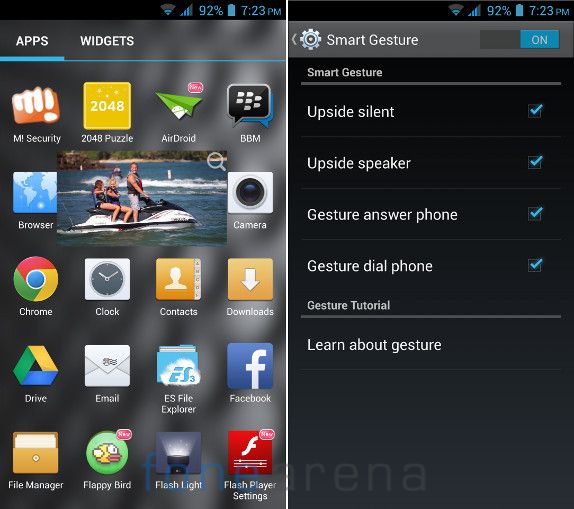 It has video pinning feature to play videos in a small window. The size of the windows can be adjusted by clicking the magnification button. It looks huge in the landscape mode, but even the large sized player looks small in the portrait mode. Micromax has removed popup browser, iFloat Tray and M! Unlock app that were present in the Canvas Turbo.

It has Smart Gestures to put an incoming call on silent by flipping the phone over and keeping it down and switch on the speaker phone on a call when you turn the phone upside down. The Proximity answer phone and the Proximity dial phone have been renamed to Gesture answer phone and Gesture dial phone. These features let you attend incoming calls automatically by holding the phone close to the ear or dial a number by bringing it to close to ear after choosing a contact. Micromax has removed incoming call and camera snap gestures that were present in Canvas Turbo. 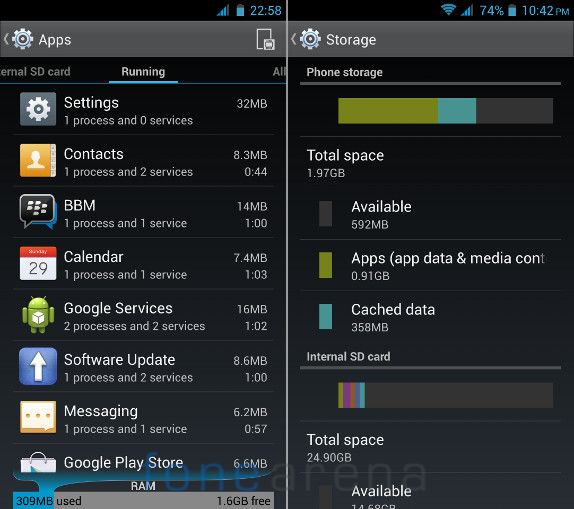 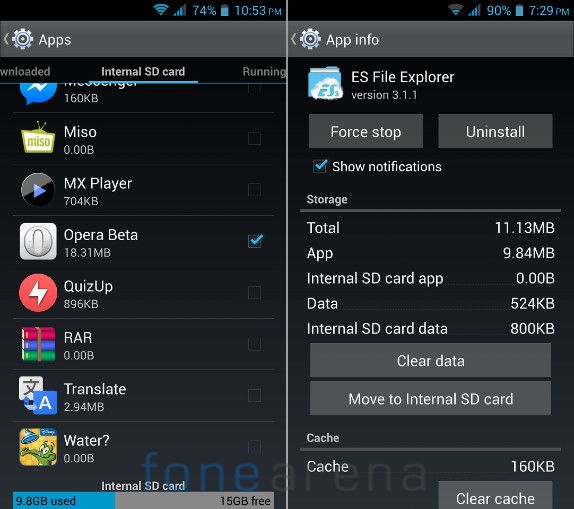 It lacks a SD card slot, but you can move apps to the Internal SD card or mass storage. It also has built-in OTA update feature, similar to the Canvas Turbo. 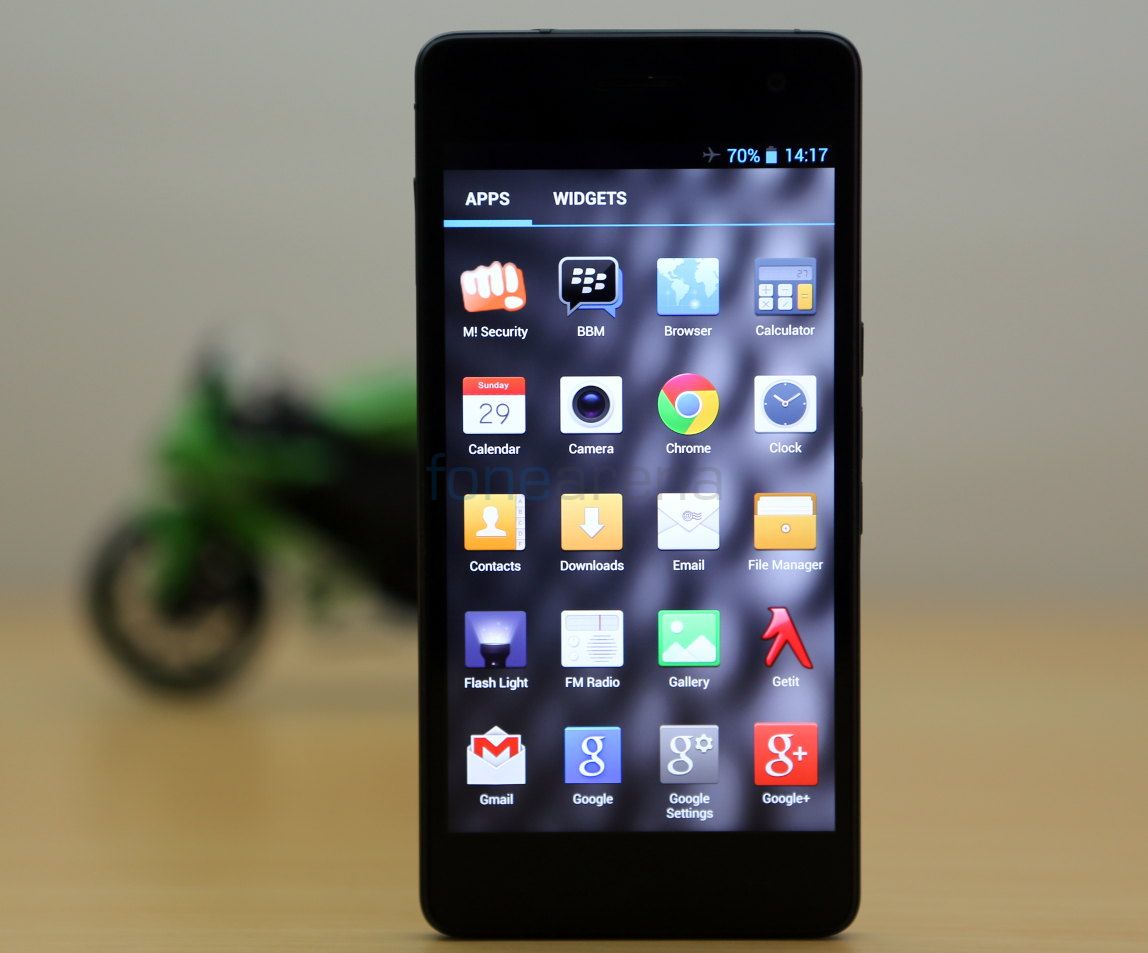 The phone comes with a range pre-loaded apps. Apart from the usual set of utility apps and Google Apps, it has BBM, Getit, hike messenger, Opera mini, Kingsoft Office (to view and edit documents), Spuul (to view free movies) and Truecaller. It also comes pre-loaded with some trial games that include, Real Steel World Robot Boxing, Where’s my Water? and Where’s my Perry? The M! Security app powered antivirus app has built-in privacy advisor, Anti-theft, anti-span and option to back up contacts. The M! Live store lets you purchase more apps and the M! Vault backs up SMS, call logs, contacts, images and videos. 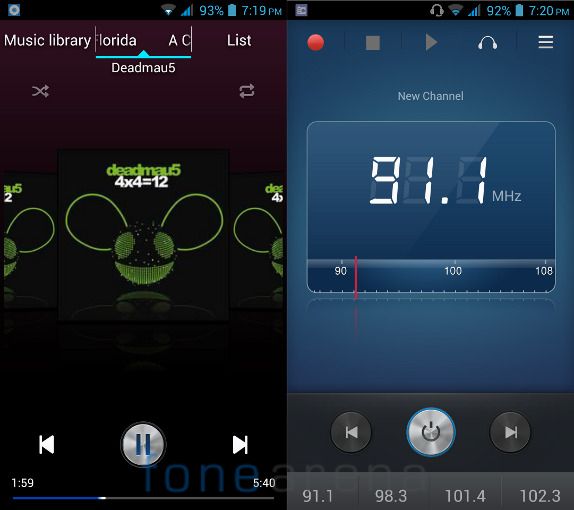 The music player has a new user interface and can play a range of audio formats. You can enable the equalizer for Bass boost and 3D effect features when you are listening using earphones. Audio from the bundled ear phones with tangle-free wire is decent. The loudspeaker output is also pretty good, thanks to the built-in Yamaha Amplifier. Since the loudspeaker is present on the bottom, audio doesn’t get muffled when you place the device on a flat surface. The phone has FM Radio with auto search and recording, but lacks RDS.

The Video player can play full HD 1080p videos smoothly and supports a range of formats. It has pinning feature, but lacks video preview and pause on look away, that were present in the Canvas 4 and Canvas Turbo. Videos look great on the full HD display. 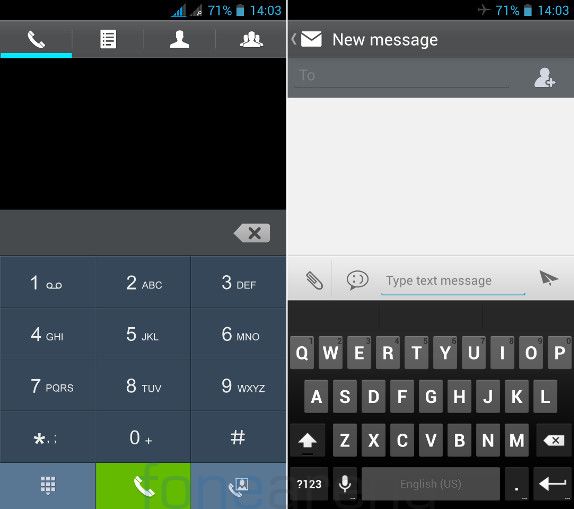 The dialer and messaging interface have a different interface. As usual it has options to switch to either SIM cards from the notification bar before calling someone or messaging. 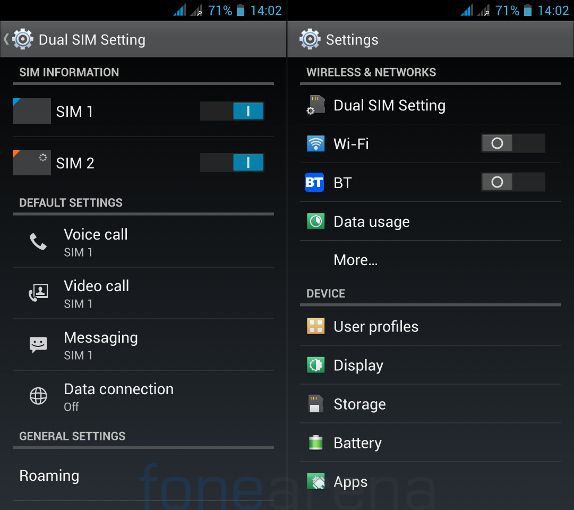 The phone has SIM manager option that lets you set a default SIM. Both the SIMs support 3G, but you can use 3G on only one SIM at a time. Connectivity features include, 3G HSPA+, Wi-Fi 802.11 b/g/n, Bluetooth 4.0 with A2DP and GPS. It has support for wireless display and USB on-the-go (OTG) support similar to the Canvas 4 and the Canvas Turbo. 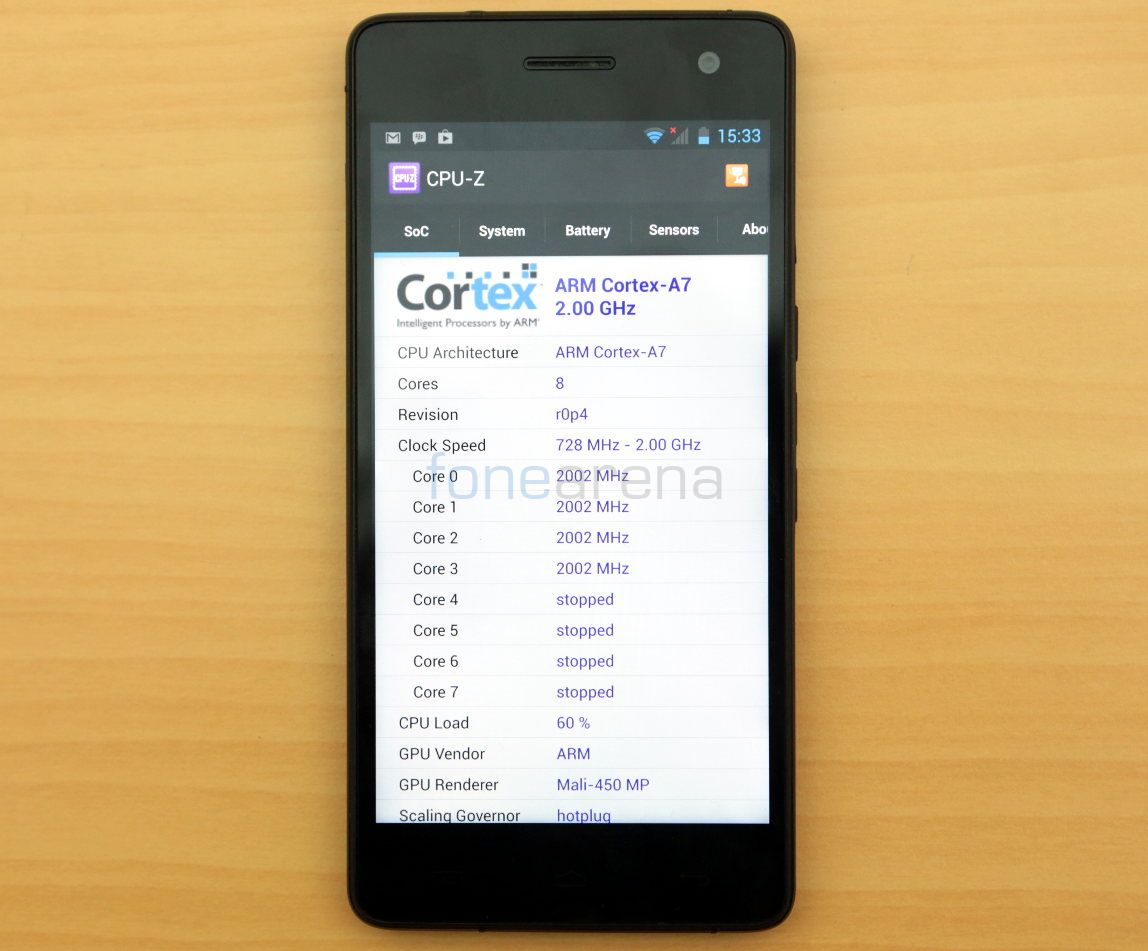 It is powered by a Octa-Core MediaTek MT6592 processor which has 8 ARM Cortex-A7 CPUs, each clocked at 2 GHz and has a Mali 450-MP4 GPU. Since it has Heterogeneous Multi-Processing (HMP), all the core can be turned ON at the same time to offer better performance compared to quad-core MediaTek processor. Performance was one of the main concerns in the Canvas Turbo since it was not smooth. The Canvas Knight did not lag a bit and multitasking was smooth, thanks to 2GB of RAM. The phone gets heated quickly when multitasking, watching videos or using 3G.

Check out the synthetic benchmark scores. 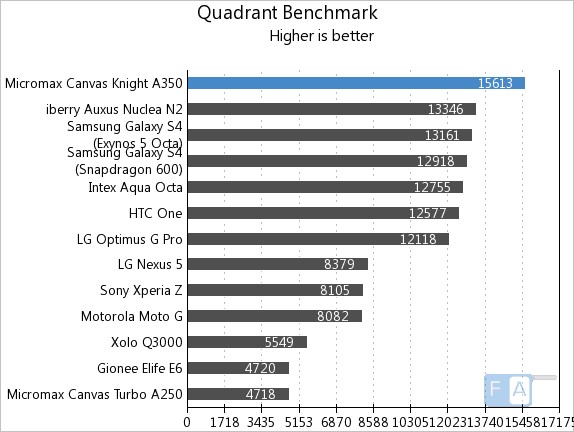 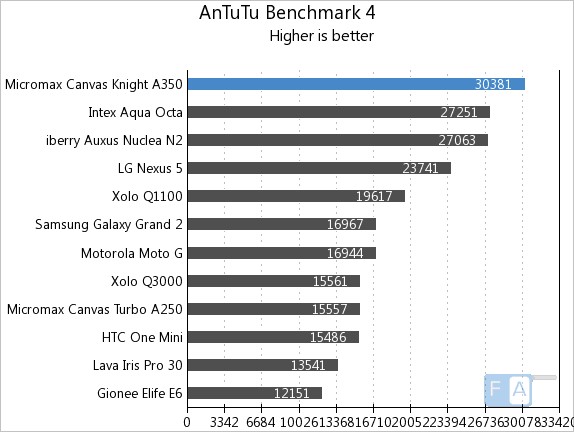 The Canvas Knight topped again in the AnTuTu benchmark 4. 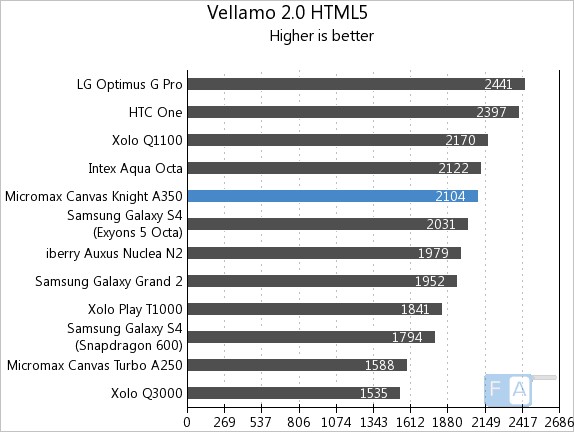 It scored 2104 points in the Vellamo 2 HTML browser benchmark. heck out the complete set of Micromax Canvas Knight A350 benchmarks here.

We tested several games on the phone. Graphics was good even when it was set to high and the gameplay performance was smooth. It also supports PlayStation 3 controller too over USB. Check out the GTA San Andreas gameplay.

This is definitely one of the best phones for gaming in this price range. Check out the complete gaming review in which we test games like Asphalt 8, GTA San Andreas, Modern Combat 4, NOVA 3 and Dead Trigger 2. 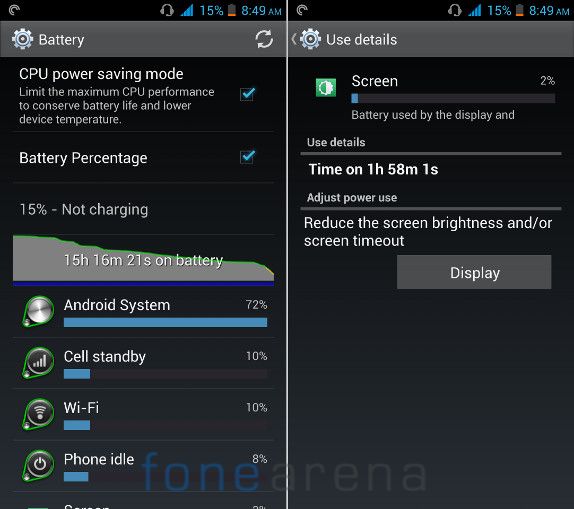 The Canvas Knight has a 2350 mAh, a minor upgrade compared to 2000 mAh battery on the Canvas HD, Canvas 4 and Canvas Turbo. It lasts for a day with average use with screen time of around two hours. With heavy use such as video playback, 3G and gaming, it will last less than a day. It has CPU power saving mode to limit the CPU use to conserve battery life. It is said to lower the temperature of the device, but the phone gets heated even when the mode is enabled. Overall the battery life is not impressive.

The Micromax Canvas Turbo was not a major upgrade compared to the Canvas 4, but the Micromax Canvas Knight is definitely a better successor to the Canvas Turbo. Even though the display size and resolution on both the Canvas Knight and the Canvas Turbo are the same, the display quality is superior. It scores in performance and build, but the battery life of the phone is not impressive and it runs on Android 4.2 OS, two iterations old. Even though it lacks an expansion slot, 25GB of user storage is more than enough. At a price tag of about Rs. 19,999, the phone has been priced perfectly considering the quality. If you can compromise on the camera and the battery life, for the display and performance, go for it.