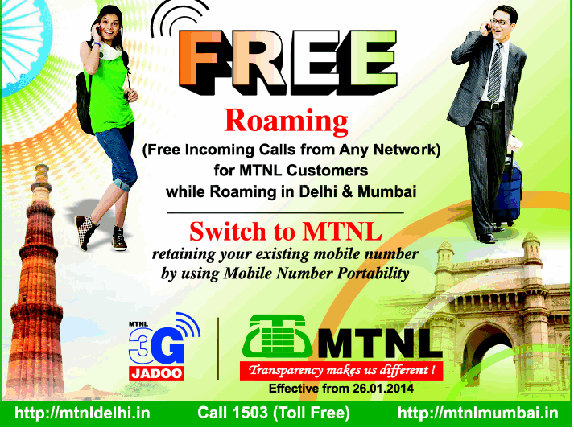 As expected, Mahanagar Telephone Nigam Ltd (MTNL) has launched free incoming calls for their customers in Delhi and Mumbai. This would let them attend calls from any network for free of cost, without any packs while roaming between Mumbai and Delhi. The company launched new packs for free roaming last year in these circles for free roaming.

Regarding the new MTNL offer, Telecom Minister, Kapil Sibal, in his tweet, said,

Setting an example for “One Nation, One Rate” – Pleased to announce Free Roaming in Mumbai & Delhi, for MTNL’s GSM customers.

The Cabinet had approved New Telecom Policy 2012 back in May 2012 that detailed on removing roaming charges across India under One Nation-Free Roaming. Last year TRAI said that providing free roaming is not possible since it would hit operators, so it recommended unlimited roaming through Special Tariff Vouchers (STVs) and Combo Vouchers.

Most of the operators introduced free roaming with packs and vouchers starting at Rs. 5 per day. BSNL is also expected to launch free roaming plans in their circles, but it would cost Re. 1 per day.

This new offer would be effective from January 26th, 2014 for both pre-paid and post-paid GSM customers. After this new move from MTNL, other operators are expected to introduce cheaper roaming plans.