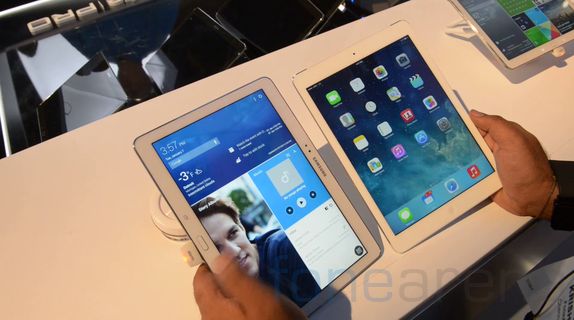 Samsung Galaxy Tab Pro 10.1 features top of the range specifications as it is powered by a Octa-core Exynos 5420 SoC(Snapdragon 800 for the LTE Variant), 2GB RAM and has 16/32GB internal storage along with a microSD card slot. The Galaxy Tab Pro 10.1 also features a very high resolution 10.1inch display sporting a resolution of 2560×1600 pixels giving it a pixel density of 299ppi. The design language and build quality is quite similar to the company’s latest flagship – Samsung Galaxy Note 3 and is complete with a faux leather back. There is also an 8MP rear camera and 2MP front facing camera for video calls.

The Apple iPad Air is powered by Apple’s very own 64-bit A7 Chip and has 1GB RAM. The iPad Air is available in storage options ranging from 16/32/64/128GB of internal storage and there is no microSD card slot. Apple iPad Air comes with the same Retina display as its predecessor sporting a resolution of 1536×2048 pixels across a 9.7inch display. The iPad Air is the thinnest and the lightest iPad yet and maintains the premium all aluminum build.

Despite having a slightly bigger display, the dimensions of Samsung Galaxy Tab Pro 10.1 are quite similar to the iPad Air. Both the devices weigh exactly 469g(WiFi only).