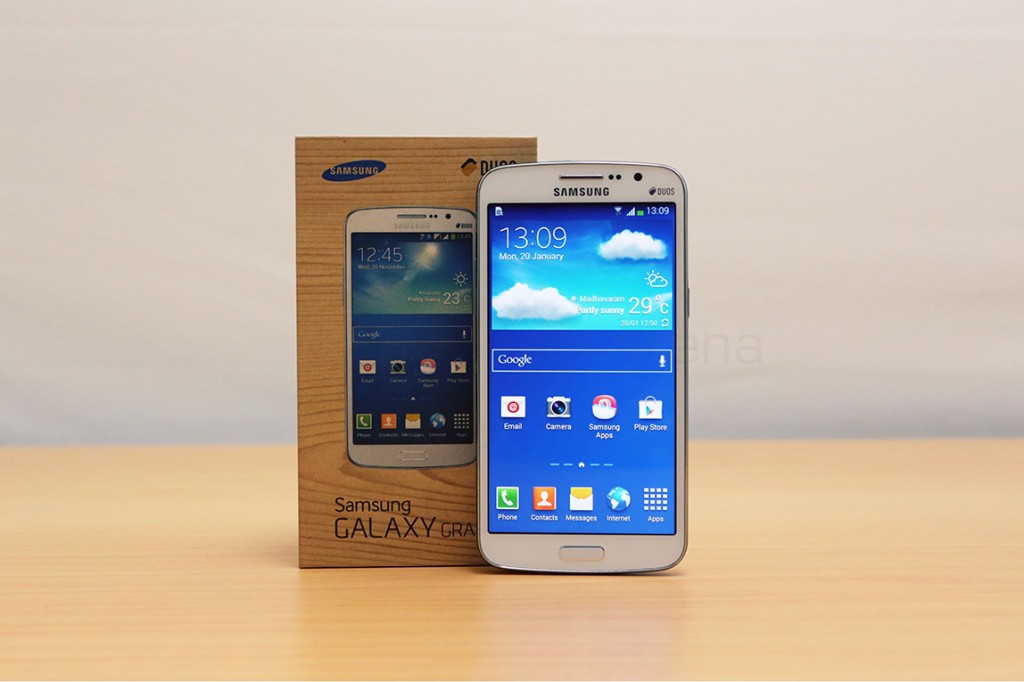 The Samsung Galaxy Grand Duos was the first device from the Korean chaebol to land its foot it in the highly competitive mid range phablet market. It was a big success, at least in the Indian market, but now we have its successor, the Samsung Galaxy Grand 2. With an upgraded spec sheet that includes a better display, better processor and the Note 3-esque faux leather back cover, the Grand 2 has caught our fancy, especially at the price of Rs. 22,999. We got the retail unit today, so here is the unboxing of the brand new Galaxy Grand 2 from Samsung including a walkthrough of the hardware and software –

Like any other Samsung Galaxy device, the Grand 2 too comes in a eco-friendly box, with contents not too dissimilar from earlier products. 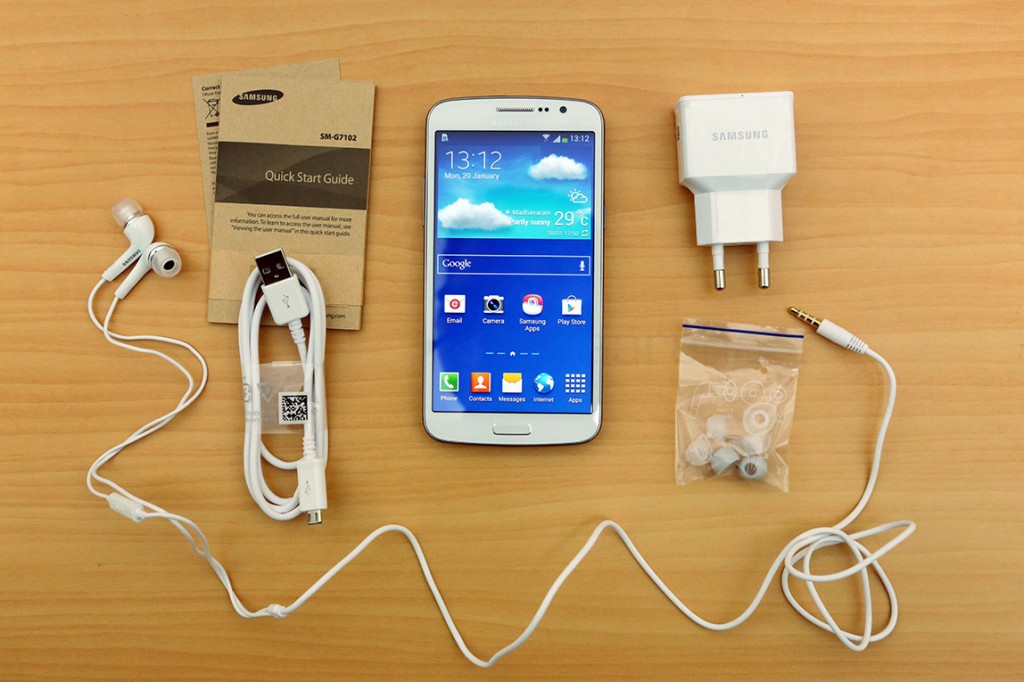 Unlike other manufacturers, Samsung doesn’t bundle any extra accessories inside the box, like a flip cover, for example. Anyways, lets talk about the device now. 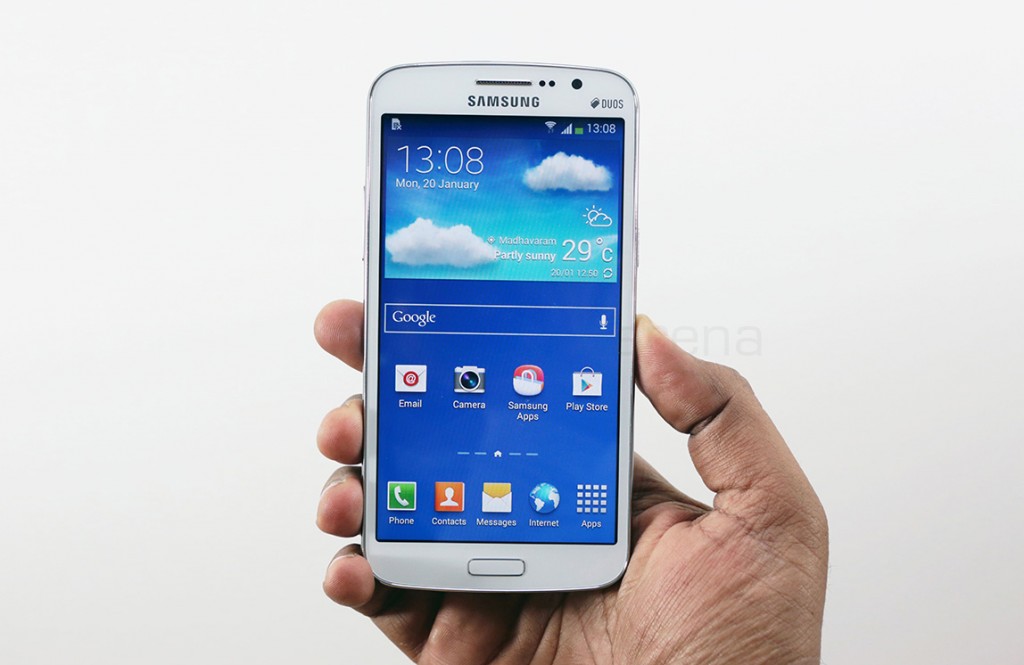 The Galaxy Grand 2 has a 5.25″ 1280×720 display, and it looks awesome. Really, the crispness, the colours and the viewing angles are very good, if our first impressions are concerned. With a really bright and solid display, we think Samsung has got a winner here. Design wise, it is very much a Galaxy, with faux chrome sides, a hardware home button, and a “me too” appearance, mimicking the flagship Galaxy S4, but the back cover. Oh, the back cover – 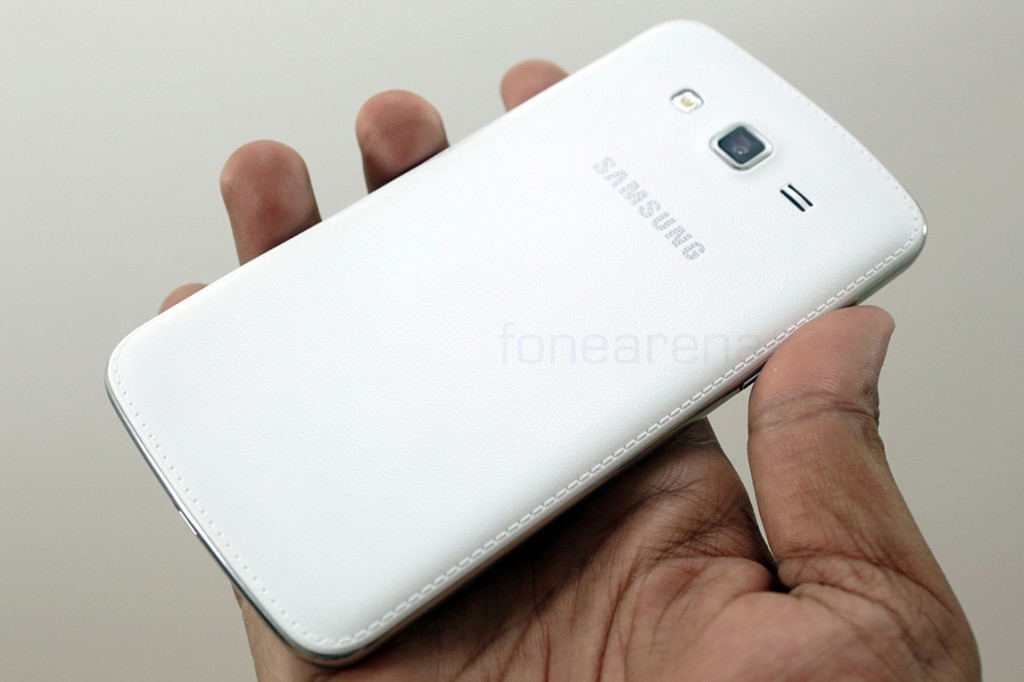 Galaxy Note 3 set the precedent for this new design trend Samsung was going for – the faux leather back cover. It’s insane how Samsung has made plastic feel like leather, and they have done it again on the Grand 2, with many other successor or new Galaxy devices waiting in line to get this. While it may not provide the same premium feel like on the Note 3, the Grand 2’s back cover is way better than the glossy plastic we had with the original Grand. That said, we have a new Quad Core 1.2 GHz Snapdragon 400 MSM8226 inside, which is incidentally the same as the Motorola Moto G. With 1.5 GB of RAM and 8 GB of internal storage(with expandable micro SD slot), the Galaxy Grand 2 should be good enough for most looking for a decently powerful phablet.

We will definitely be bringing you more on the Galaxy Grand 2, with performance in benchmarks, gaming and so on, so stay tuned to the blog and our YouTube channel for more. Meanwhile, here are more pictures of the Grand 2 and its box contents –

Let us know what you think in the comments section below.