Sony and Samsung announced their flagship devices at IFA 2013. Samsung was the first company to step into the 5inch + category with their original Galaxy Note and it was a very successful experiment. Samsung continued to reap even bigger rewards with the second interation of the Note series – Samsung Galaxy Note 2. Samsung is all set to make it three in a row with their Samsung Galaxy Note 3. 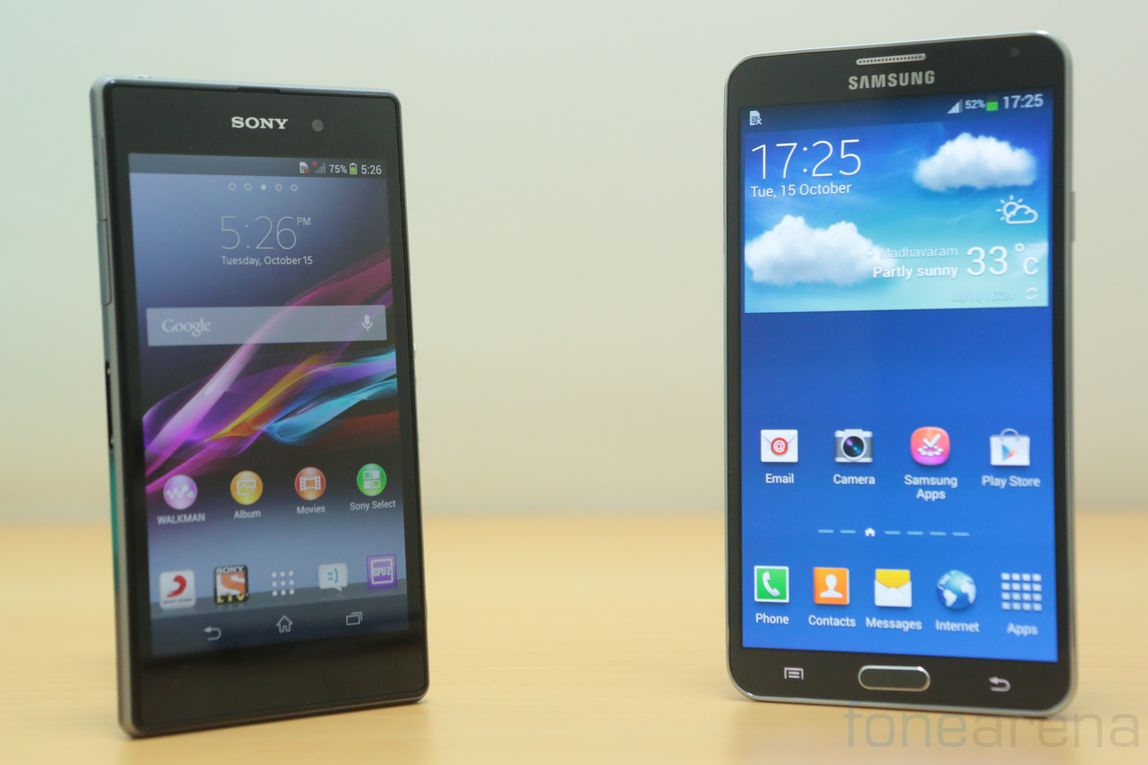 Sony, on the other hand don’t have a colorful Android history to share as they are just coming back from a land where they were always late to the party. Sony introduced the their first camera centric flagship – Sony Xperia Z1 at the IFA 2013 in Berlin. Sony Xperia Z1 had leaked numerous times prior to launch and when Sony announced it, nothing came as a surprise – even the 20.7MP camera. Sony Xperia Z1 has the biggest camera sensor on an Android smartphone, even bigger than the one on the camera-phone – Samsung Galaxy S4 Zoom, but without the optical zoom.

Today, we will be bringing you the best of Samsung against the best of Sony. Both the phones pack some pretty serious processing power and do they have what it takes to dwarf out each other. You can check out the camera comparison video right below.

In terms of looks, Samsung Galaxy Note 3 and Sony Xperia Z1 couldn’t be more different. Samsung Galaxy Note 3 looks like a typical Samsung product with a plastic finish, but what has changed is the choice of material for the back cover. Instead of the usual plastic, Samsung went for a fake leather back and that has greatly improved the feel of the device. On the other hand, Sony Xperia Z1 comes with an industrial design with a rectangular build and a single piece of aluminum at the center and glass for the center and back. Sony has been adopting the same design language for its flagships and the design seems to be slightly played out. 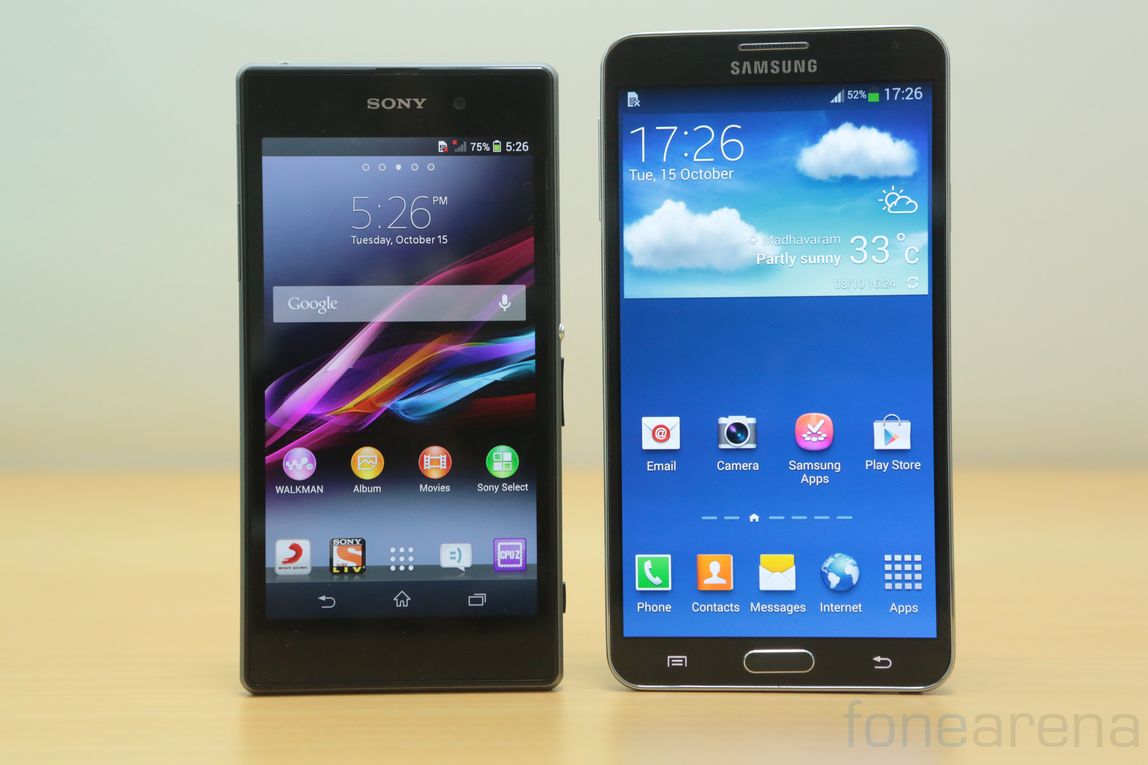 Samsung managed to do an amazing job of fitting a bigger 5.7 inch display in almost a similar body as the Galaxy Note 2 which had a 5.5inch display. Sony Xperia Z1 is big for its size especially when you consider what the competition are doing – Samsung’s Galaxy S4 and LG G2 have done a great job of keeping the body small despite having same or even bigger display. 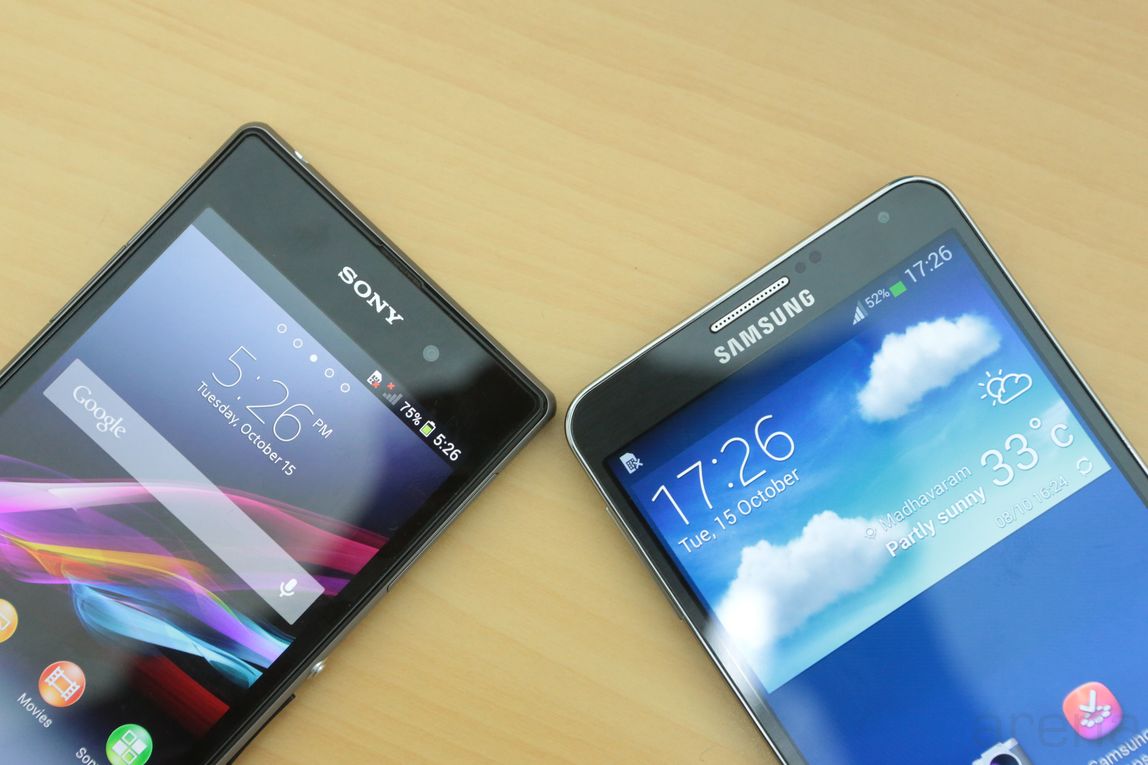 On Samsung Galaxy Note 3, below the display, we have a typical Samsung layout with a physical home button and a couple of capacitive touch keys on the either side. But there are no navigation keys on Xperia Z1 and everything is restricted to on screen buttons. 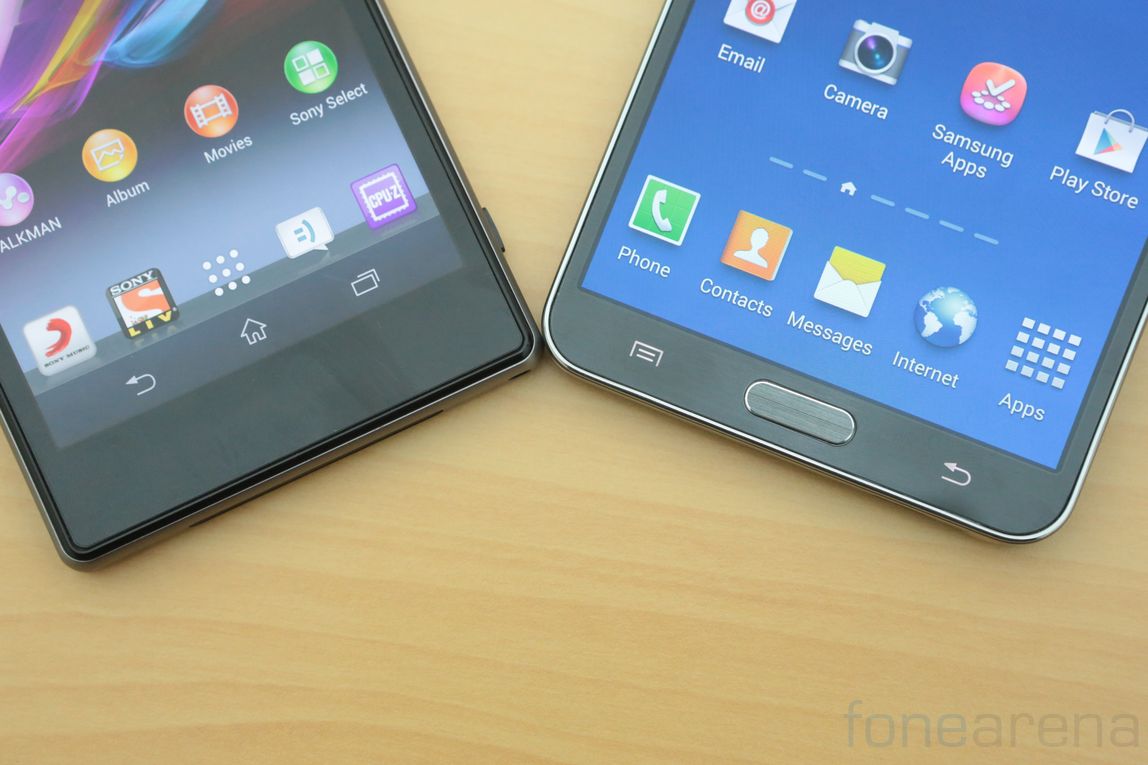 The positioning of keys is quite different on both the phones. On the right side, we have just the power lock key on the Note 3 while on the Sony Xperia Z1 you have the circular and symbolic Sony power lock button, volume rocker, microSIM card slot and an extra camera shutter key since it is a camera centric device. 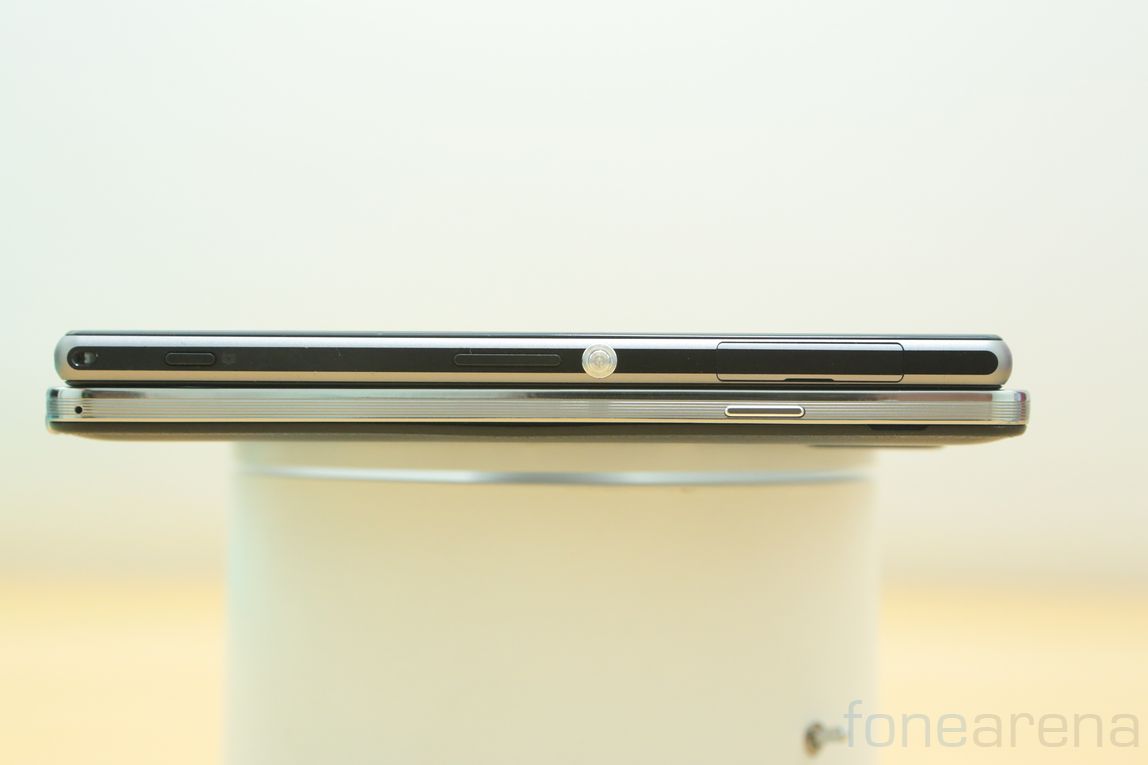 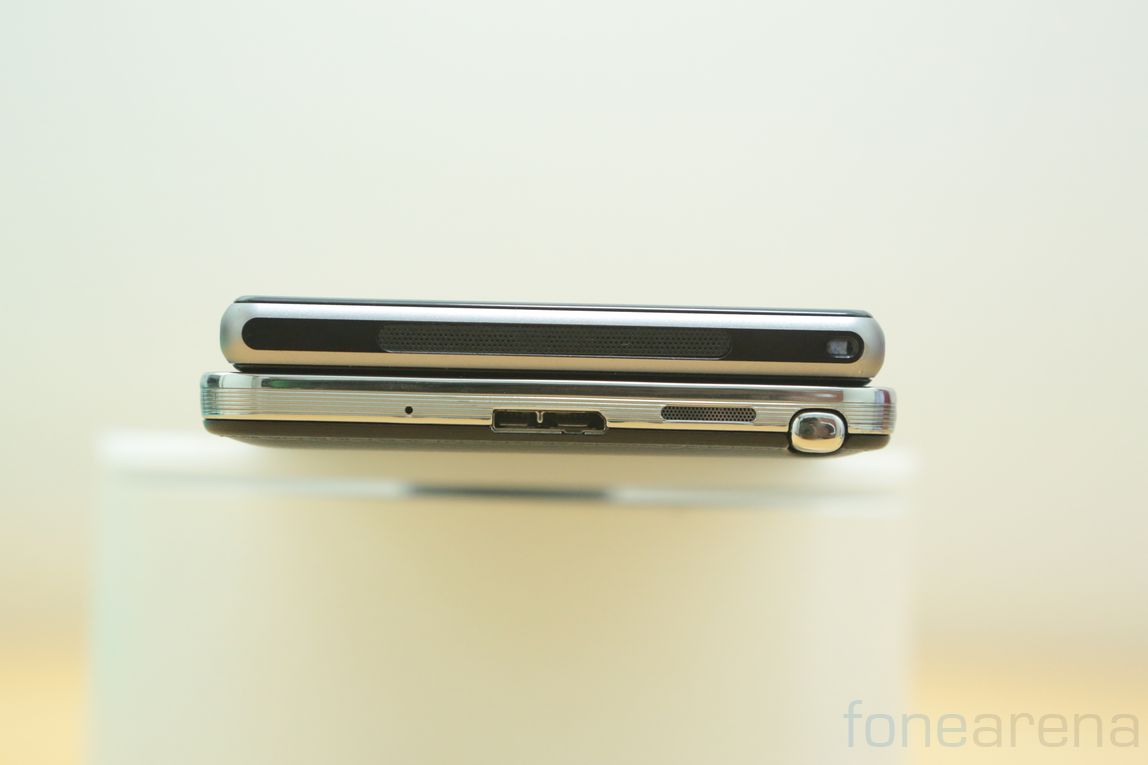 On the left side, there is just the volume rocker on the Note 3 while we have provision for docking at the center on Xperia Z1 and a covered microUSB charging port. On the Xperia Z1, in addition to the microUSB port, we also have the microSD card slot here. 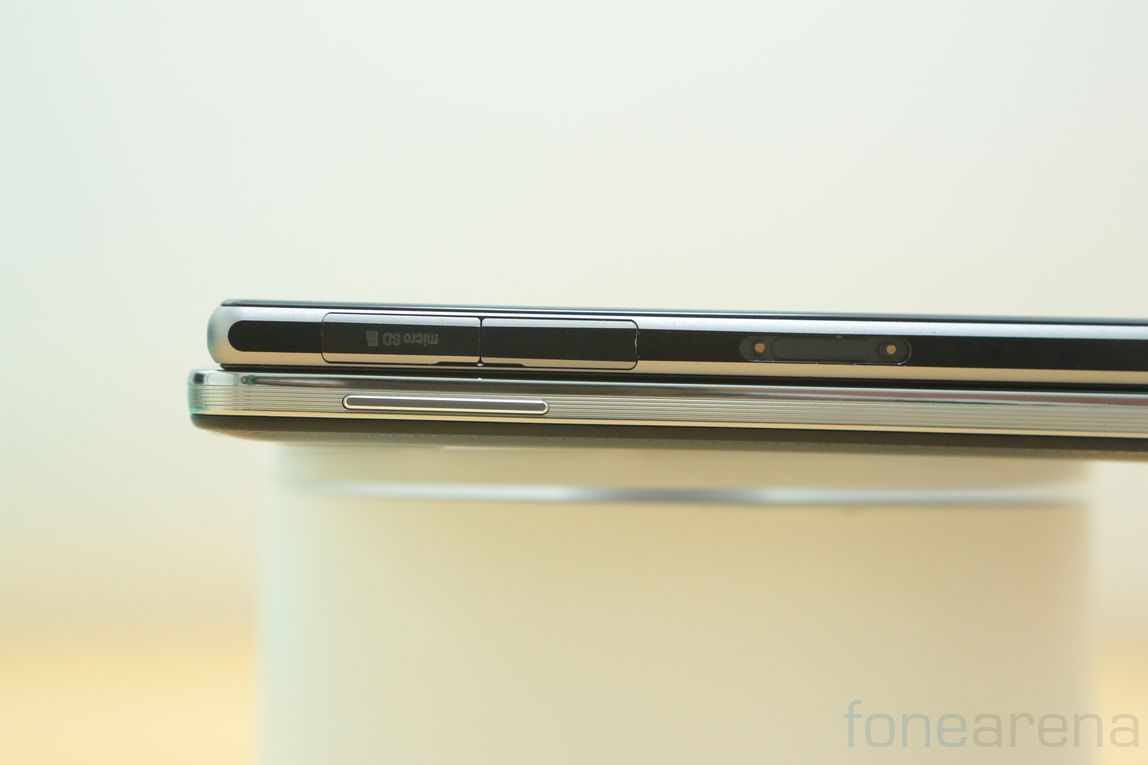 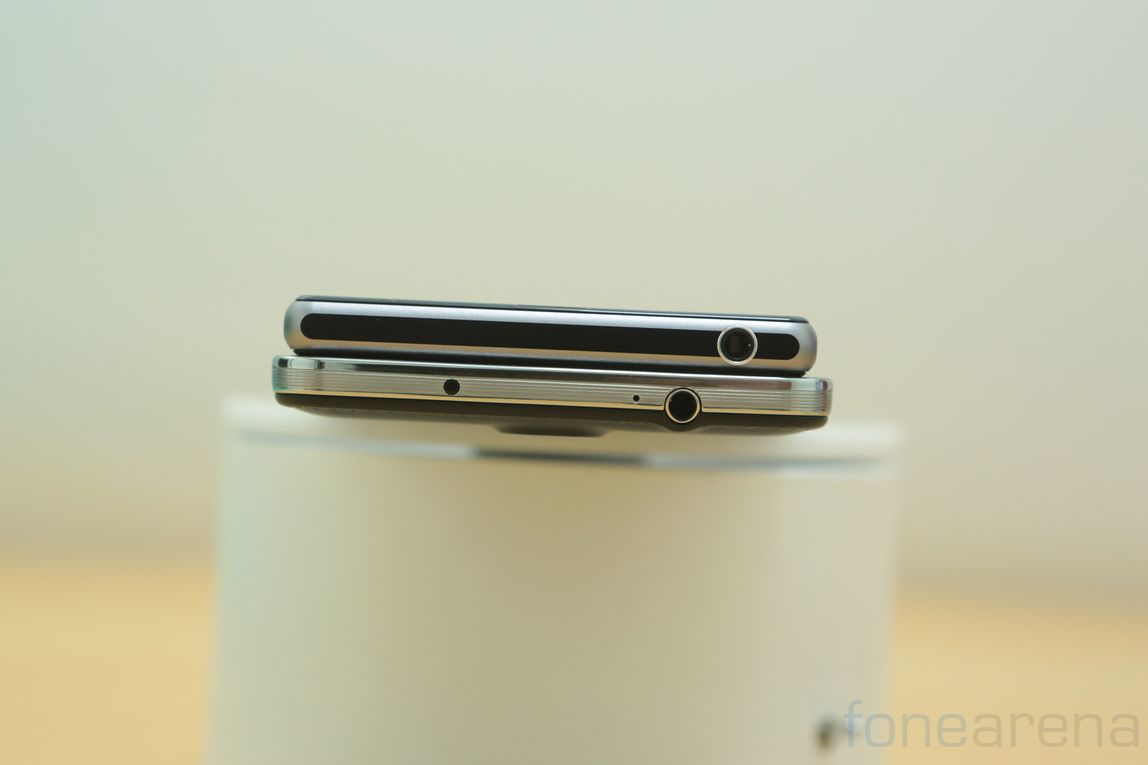 The back of these devices is where we would notice the differences as easily as the difference between day and night. The materials used for the back are quite different and hence the characteristics are different as well. Samsung Galaxy Note 3 uses a false leather back that makes it feel and look quite premium and the back is not glossy, not shiny, not slippery and not a finger print magnet. The back of Sony Xperia Z1 follows the same design language as the Xperia Z and Xperia Z Ultra and uses glass. The choice of glass was interesting, but it is quite glossy and attracts fingerprints. 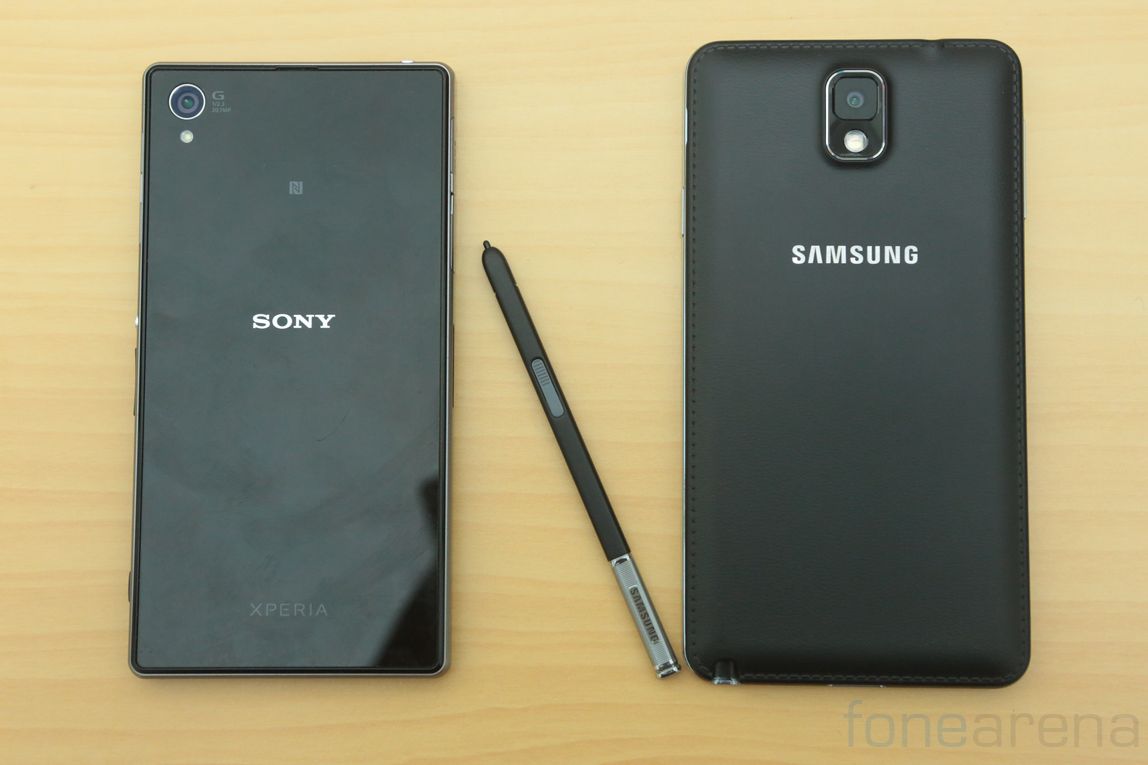 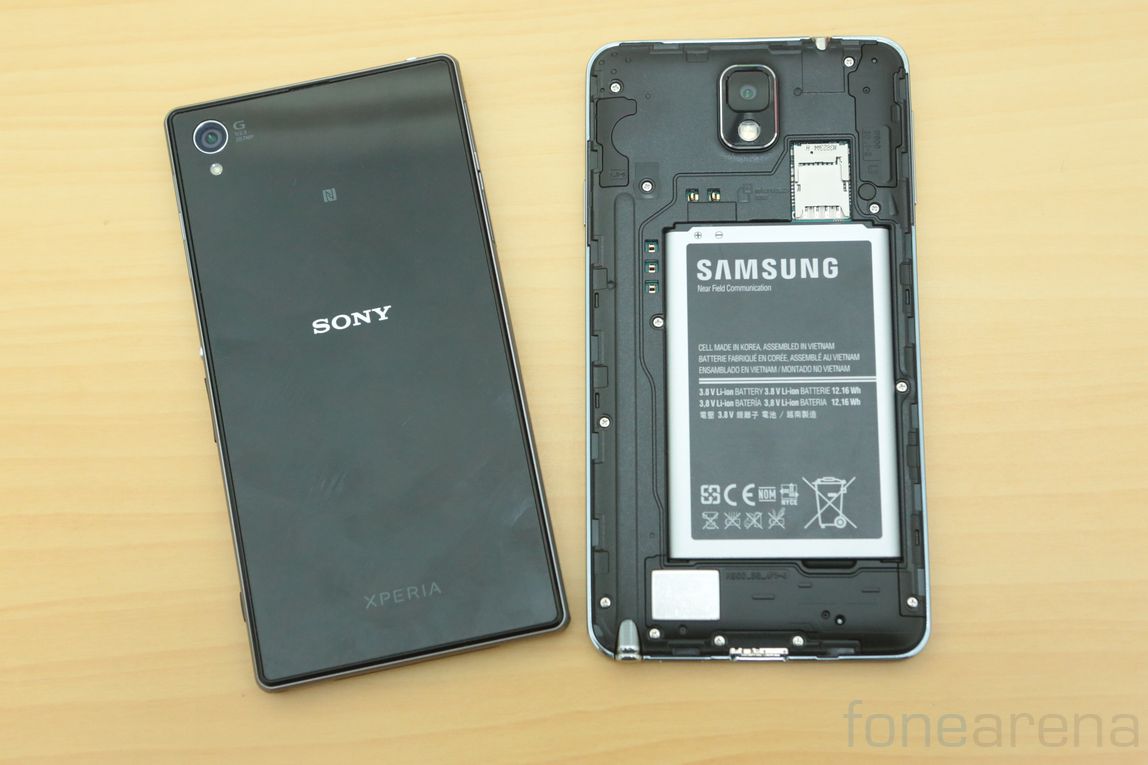 Overall, the winner is Samsung Galaxy Note 3 because of its display to body ratio and the faux leather back that makes gripping the phone easy. Sony Xperia Z1 is kind of too big for a 5inch phone and while the industrial design continues to be solid and eye-catchy, it is quite reflective, glossy and a fingerprint magnet.

In various aspects of a display like brightness, contrast, viewing angles and sunlight legibility, the Galaxy Note 3 is well ahead of the Xperia Z1. Colors seem slightly over-saturated on the Note 3, but you get to adjust the saturation settings. The viewing angles of Xperia Z1 are very poor and remind us of the screen of Xperia Z which suffered from similar problems. When seen from a slightly different angle, the screen of Xperia Z1 appears whitish. The higher pixel density on the Xperia Z1 does not give any advantage that is visible to the naked eye.

Overall, the bigger display of Samsung Galaxy Note 3 is much better.

Specifications of both these phones are simply top of the shelf. Samsung Galaxy Note 3 is powered by Samsung’s own Exynos 5420 Octa-core chipset clocked at 1.9GHz and has Mali T628 GPU while the Sony Xperia Z1 has the market leader Snapdragon 800 SoC clocked at 2.2GHz along with Adreno 330. Galaxy Note 3 has 3GB RAM while Xperia Z1 has just 2GB RAM. 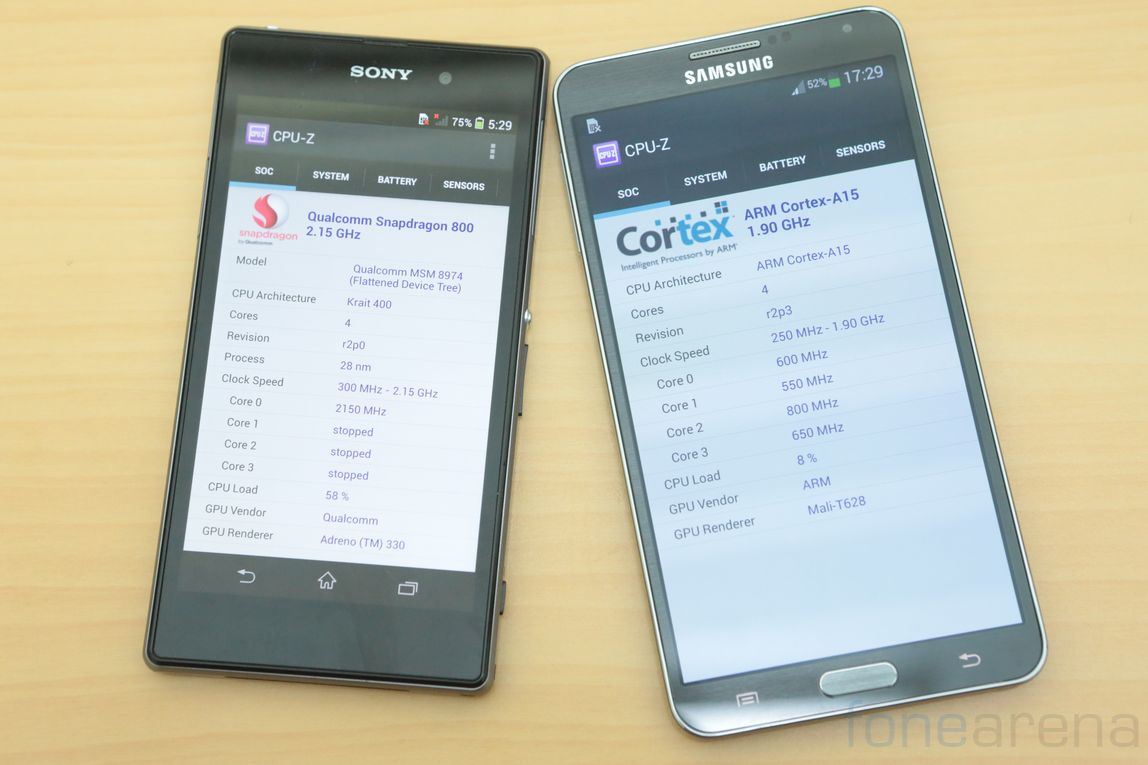 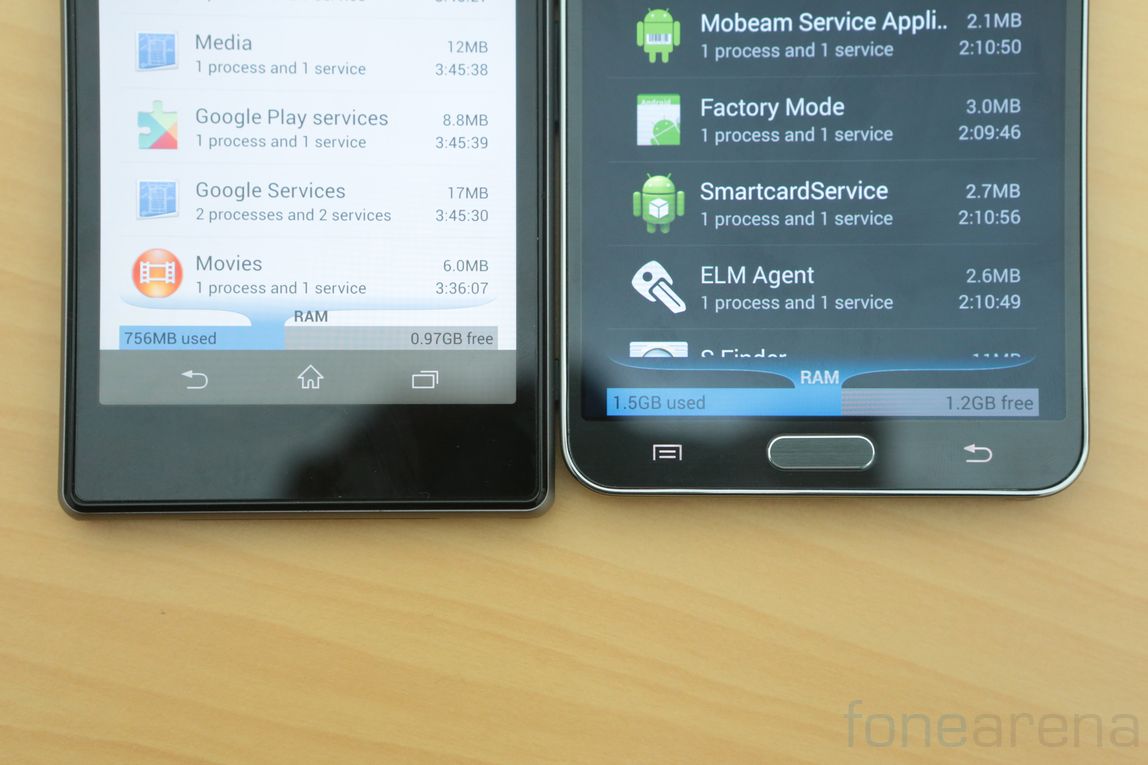 In terms of internal storage, Galaxy Note 3 comes in 16/32/64GB variants while there is just 16GB internal storage on Xperia Z1.Both of them have a support for microSD cards. We have the 32GB Note 3 and out of the 32GB, 24GB is user accessible while on the Xperia Z1 – out of the 16GB, around 11.7GB is user-accessible on both the phones. 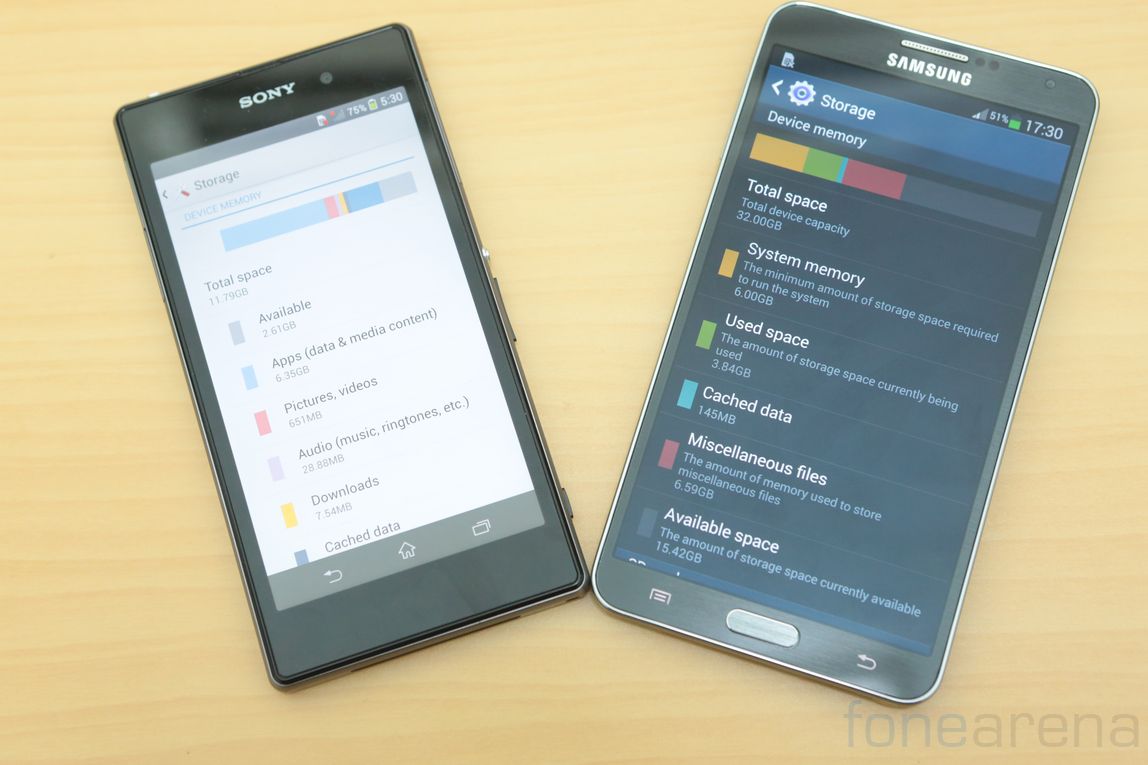 Overall, it is a tie.

Samsung Galaxy Note 3 comes with a 13MP camera and that is about it. Sony Xperia Z1 is the company’s first step towards a camera centric flagship as it comes with the biggest sensor on an Android smartphone. The Xperia Z1 comes with a 20.7MP Sony G Lens sensor and houses Sony’s own Bionz Image processor for superior image quality. Though the Sony Xperia Z1 runs on Snapdragon 800 SoC, there is no 4K video recording and you do not even get 1080p Full HD recording at 60fps which you find on LG G2 and Note 3. Both the phones have a 2MP front camera that can record 1080p videos as well. 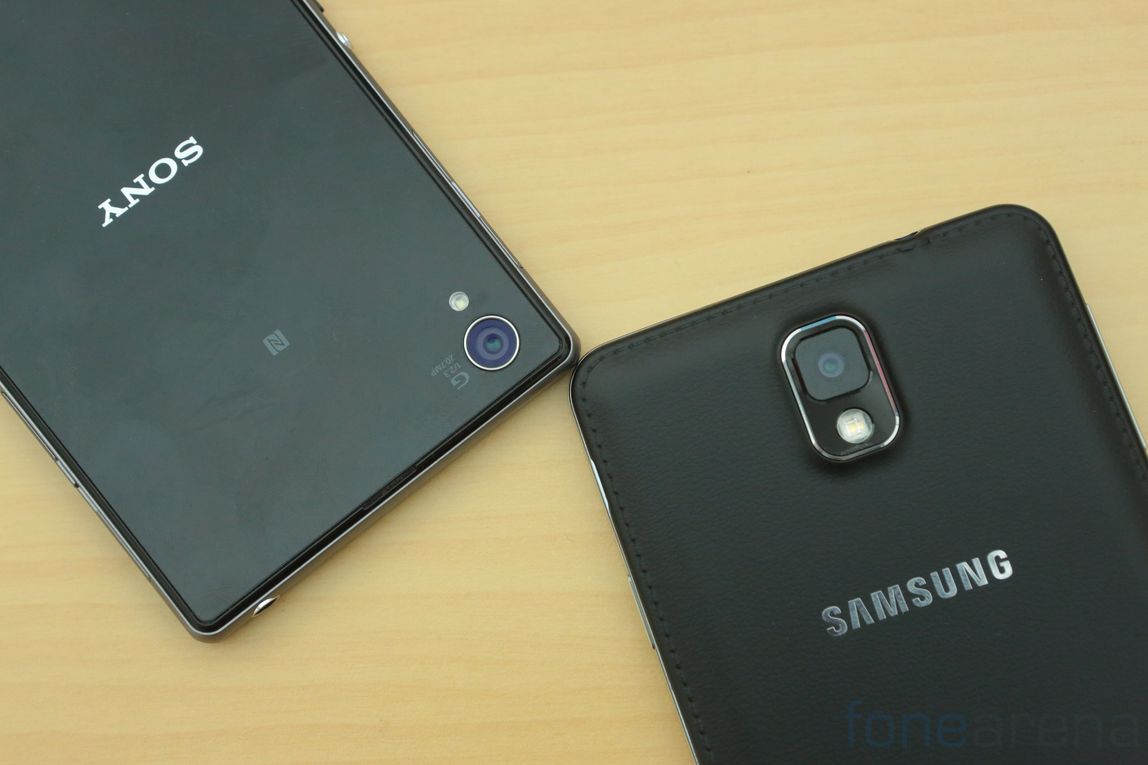 In terms of camera UI, there is a huge difference. Galaxy Note 3 has Samsung’s latest camera application. It has various shooting modes like Golf mode, Beauty Face, Best sit, best photo, sound and shot and so many other modes. On the Xperia Z1, the camera UI is different as the mode selection button is present on the bottom right corner above which we have the camera shutter key and video record button. The shortcut to recent images is on the top right corner. On the left side, we have the toggles for Flash and switch for Front/Back camera. Below it is the three vertical dot icon for settings. The various shooting modes that are available in Xperia Z1 include the regular Superior Auto mode, Manual mode, Timeshift Burst mode, Picture effect mode, sweep panorama, AR Effect, Social Live and Info-eye. Also Xperia Z1 produces over-sampled 8MP images in Superior Auto mode. This is one of the first Android smartphones to produce over-sampled images (which was introduced to smartphones by Nokia).

In terms of image quality, the photos and videos taken on the Sony Xperia Z1 in daylight are better with nice details and more colors. You can check out the camera comparison video right below. 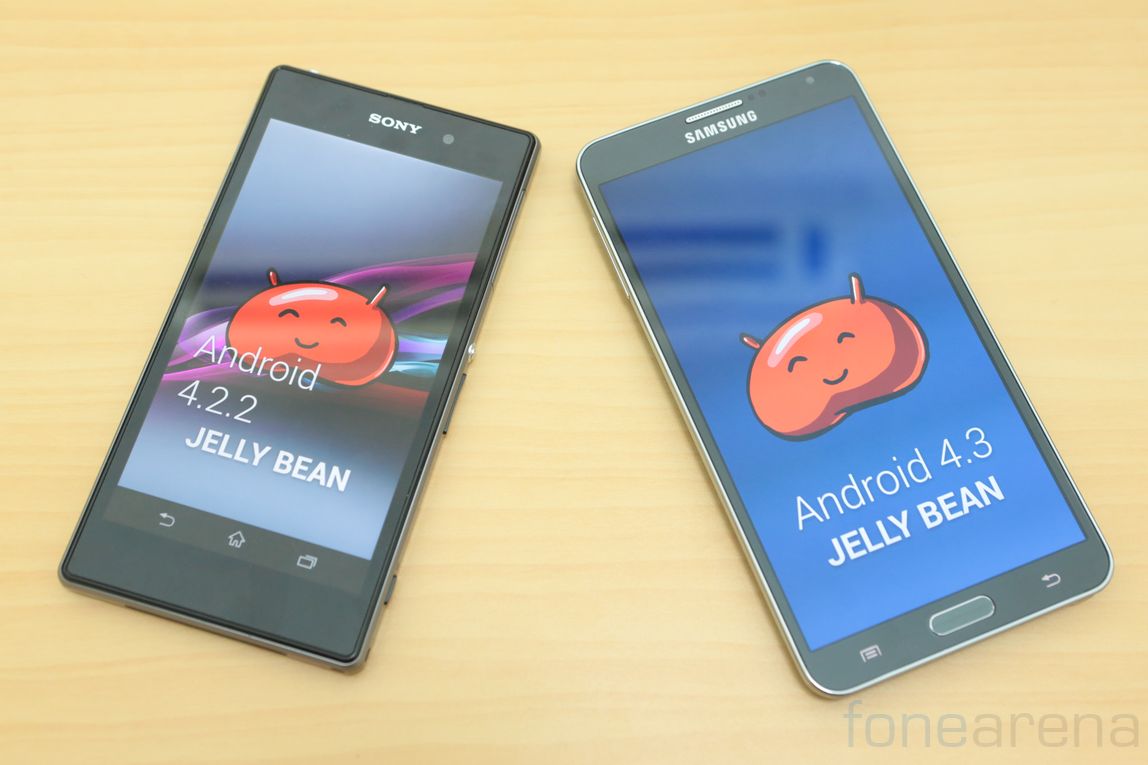 The app drawer on both the phones is different and both of them allow you arrange the icons in any order, alphabetical order. On the notification bar, Galaxy Note 3 can have customizable toggles while the Xperia Z1 has exactly ten and fixed toggles for various connectivity options like Bluetooth, WiFi, NFC and so on. Xperia Z1 comes with Sony’s small apps which can be accessed by pressing the third navigation key that also opens the list of already open apps. There are various small apps like calculator, recorder, timer, bookmarks and so on. You can open any number of these apps at a time and have them on screen. They are always present on the screen unless you close them. Instead of closing them, you can drag them to the right side of the screen where they become small icon and attach themselves to the right side of the screen. On clicking those minimized icons, they are visible again. These small apps can be very useful for taking down notes and doing small things in a fast manner.

Both the phones have their share of software bloatware, but in terms of features and productivity, we have to give it to the Samsung Galaxy Note 3.

Samsung Galaxy Note 3’s Gallery app looks minimal but has a simple pinch to zoom feature that lets you organize more pictures on the screen depending on your need. Samsung’s Music app is typical Samsung with a lot of features laid out into a simple layout. Video player on the Note 3 is simply the best as it pretty much plays anything we throw at it.

Sony Xperia Z1 comes with their home-brewed multimedia apps like Album, Walkman and Movies. The Album app which is the image gallery is quite functional as it supports pinch to zoom feature. When you pinch out inside the app, all the images rearrange themselves to the smallest possible thumbnail size and when you pinch in, they zoom in and keep zooming in until you are with a single image and even when pinch in further, they zoom the picture. The rearranging takes place so fast thanks to the Snapdragon 800. Walkman is Sony’s trademark music player and comes with all the features and some good Eye-candy. Movies is the video player for Sony smartphones and not it does it play the movie, but also fetches information about the movie from the Internet which gives you a quick summary of the movie.

Both the devices are great for multimedia, but because of the bigger and better display, Note 3 has the advantage.

Both the phones are absolutely great for gaming because of their specifications. But since the display on the Xperia Z1 is small and sub-standard when compared to the Note 3, Note 3 seems to be a better device for gaming. We noticed that both the devices heated up while playing graphics intense games. 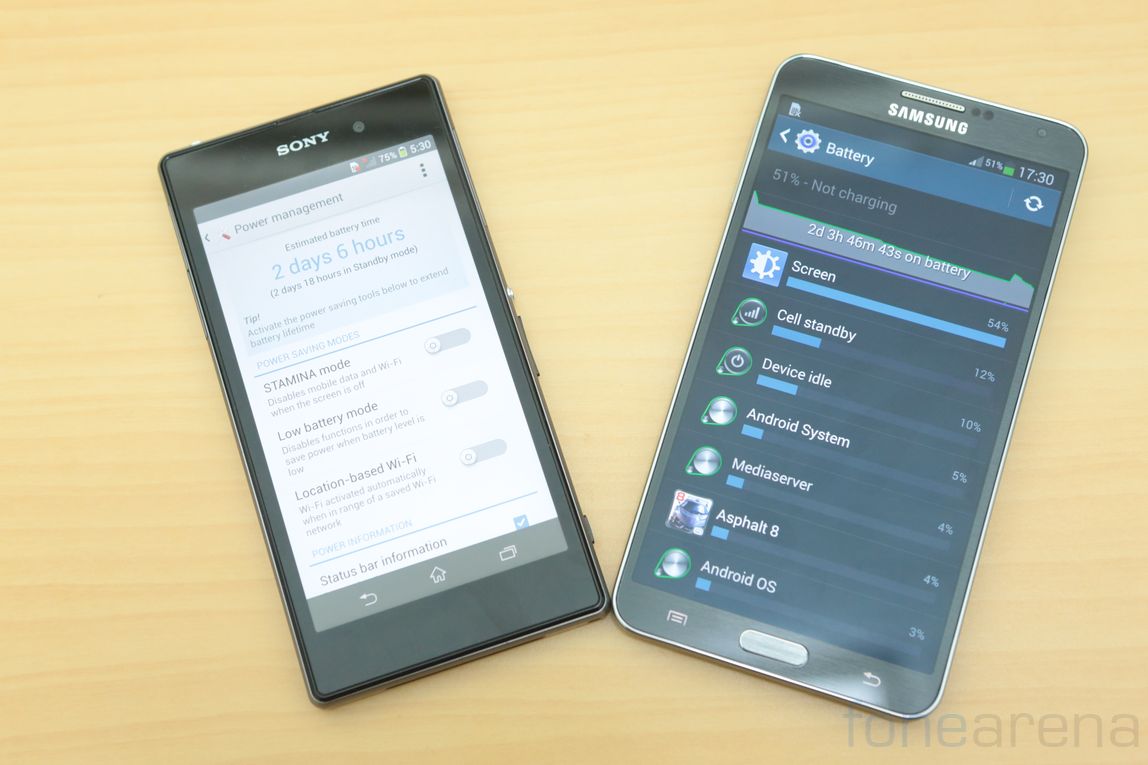 In terms of connectivity, both the phones are equipped with WiFi(802.11 a/b/g/n/ac), DLNA, WiFi Direct, WiFi Hotspot, Bluetooth, TV out(via MHL), GPS with A-GPS and GLONASS, NFC, microUSB and USB OTG. However, only the Galaxy Note 3 has dual-band WiFi ensures faster WiFi speeds. Samsung Galaxy Note 3 is also one of the first(and only) phone to come with a microUSB 3.0 port. You can check out the USB 3.0 demo on Samsung Galaxy Note 3 right below.

Samsung Galaxy Note 3 is Samsung’s second flagship in 2013 and Sony Xperia Z1 is the company’s third significant Android smartphone this year, but the company’s first camera centric flagship. Galaxy Note series usually has top of the range specifications and the Galaxy Note 3 is no different. Unlike previous years, where Sony was late to the party in terms of specifications, for a change, Sony is using top of the shelf processors for its device and we find the Snapdragon 800 SoC in Xperia Z1. 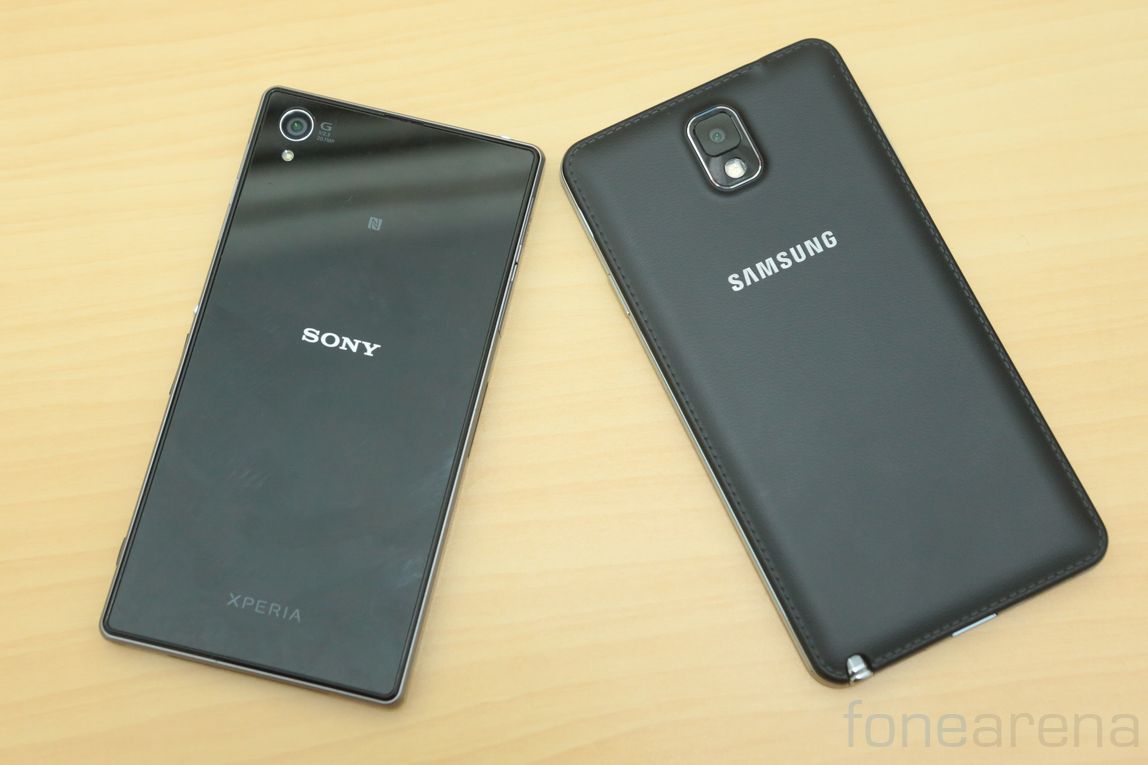