At IFA 2013 in Berlin Samsung announced their Samsung Galaxy Note 3 which is the third iteration of their Galaxy Note series while Sony had announced the Xperia Z Ultra, their first phablet sometime in July. Sony Xperia Z Ultra was the first smartphone to feature a Snapdragon 800 SoC and now the LTE variant of Samsung Galaxy Note 3 has the Snapdragon 800 version. The international version, which we get in India, comes with Samsung’s Exynos Octa core chipset. Lets check out how these devices perform. 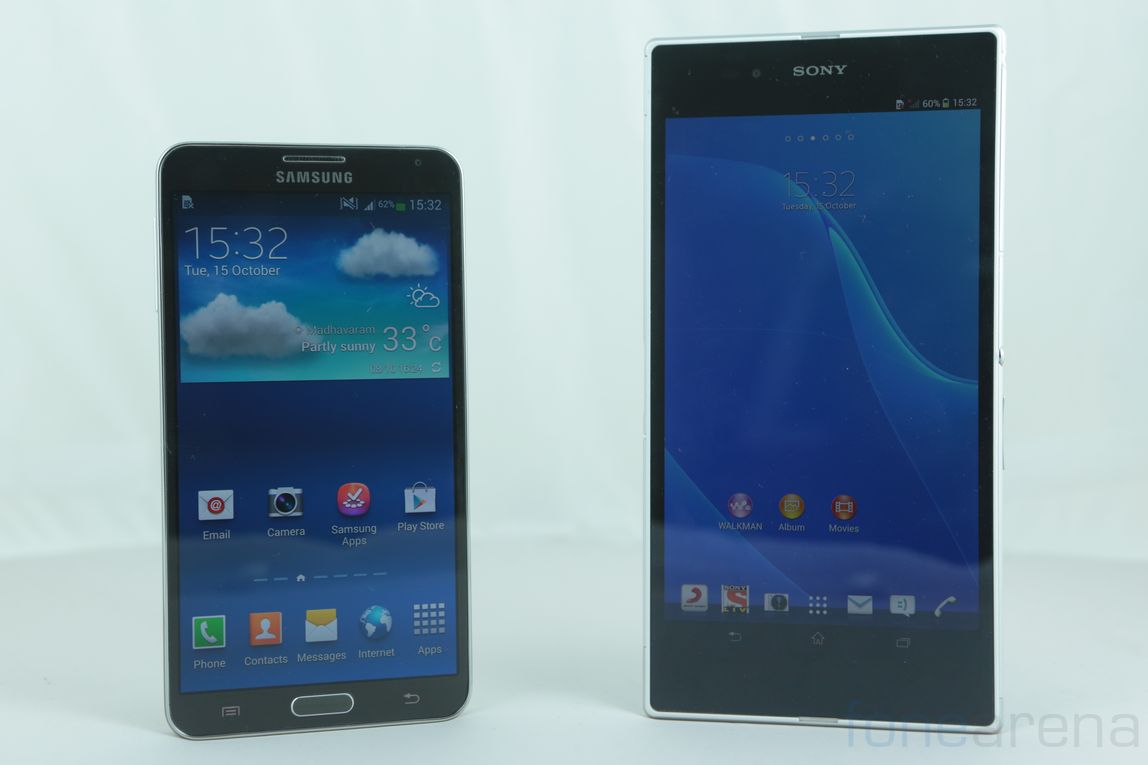 You can check out the entire comparison video right below.

In terms of design and looks, Samsung Galaxy Note 3 and Sony Xperia Z Ultra are world’s apart. Samsung Galaxy Note 3 is one of Samsung’s first devices to break away from the regular all plastic finish and features a faux leather back which makes it look and feel much better in the hands. Sony Xperia Z Ultra adopts its design from Xperia Z with solid glass for the front and back. 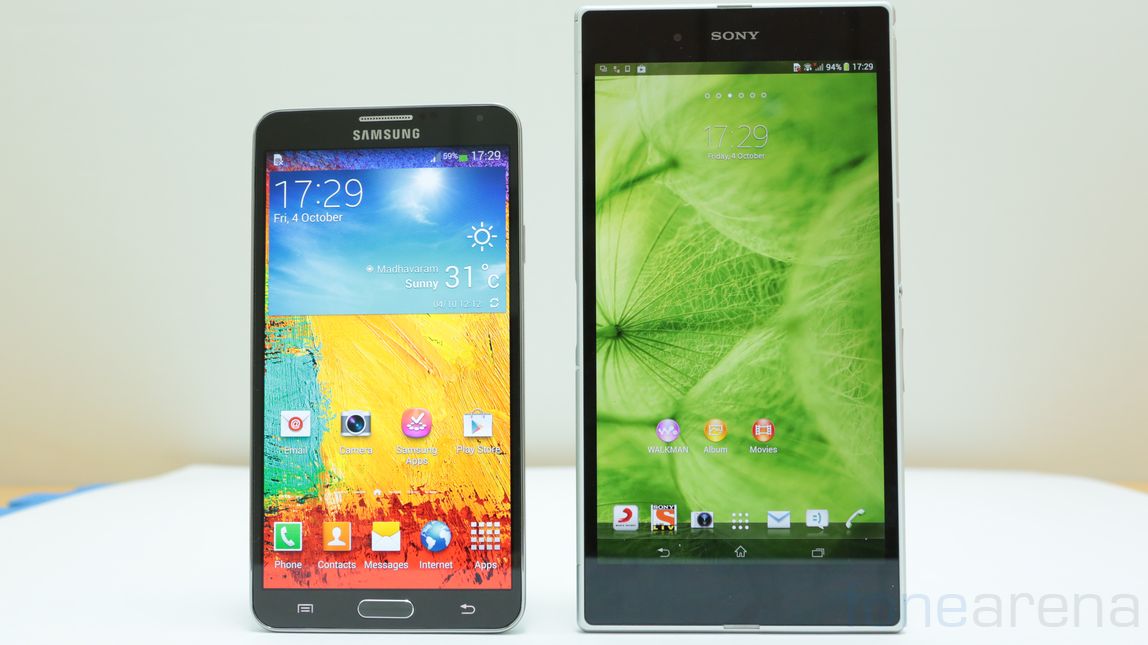 Dimension-wise, the Galaxy Note 3 is shorter and less wide than the X Ultra, but is thicker. Galaxy Note 3 also weighs considerably lower at 168g while the Z Ultra weighs around 212g. The Sony Xperia Z is surprisingly thin.

The positioning of keys is different on both the devices. On the right side, we have just the power lock key on Galaxy Note 3, while on the Xperia Z Ultra, we have Sony’s iconic power lock button, volume rocker, 3.5mm audio jack, covered microSD and micro SIM card slots. 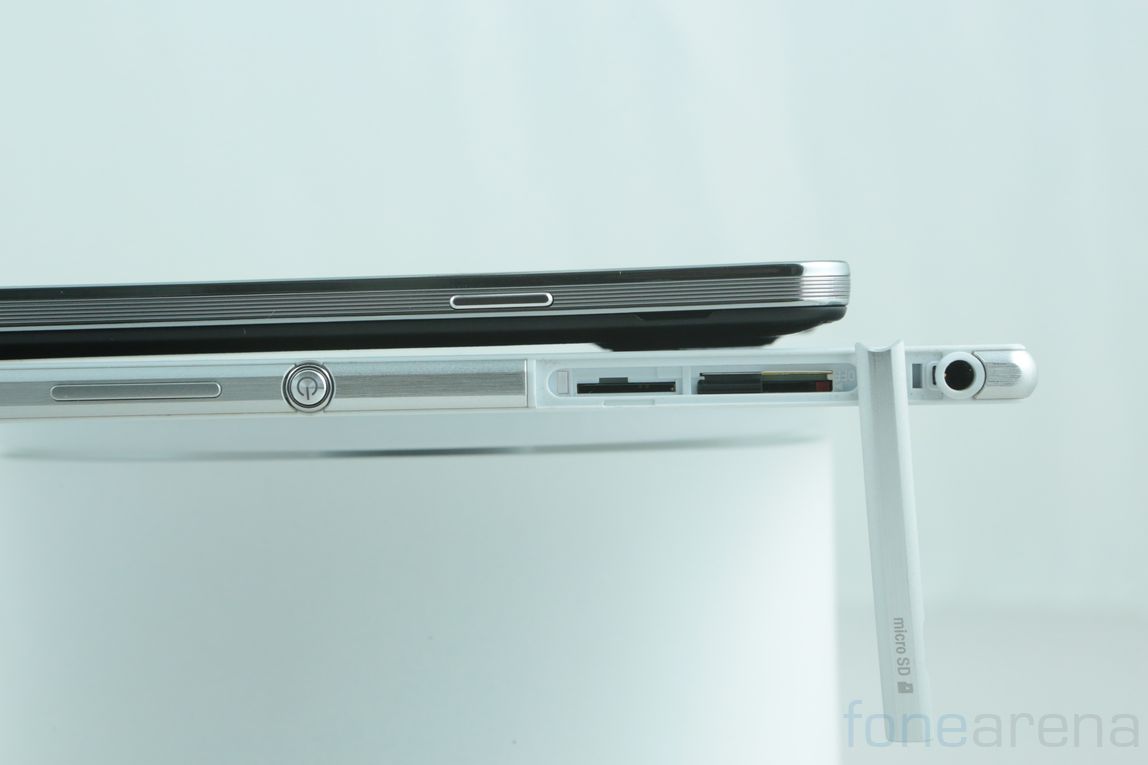 On the bottom, we have an uncovered microUSB port, a microphone, loudspeaker and S-Pen compartment on Galaxy Note 3 while we have just the loudspeaker on the Xperia Z Ultra. 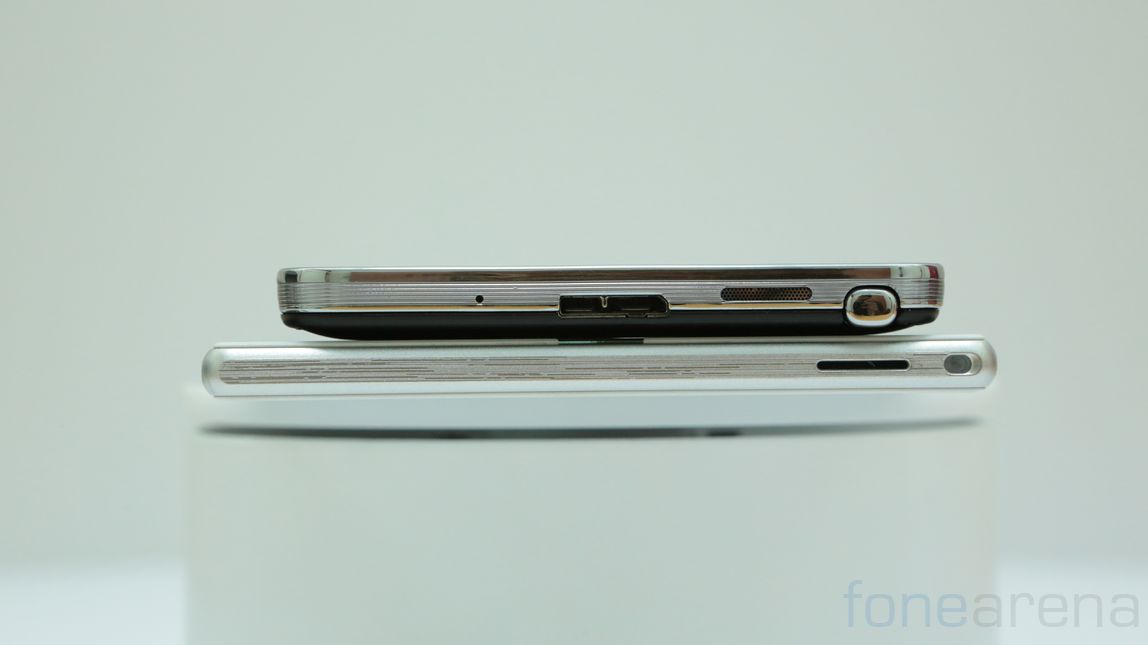 On the left side of Galaxy Note 3, there is just a volume rocker, while on the Xperia Z Ultra, we have a dock connector at the center and a covered microUSB slot. 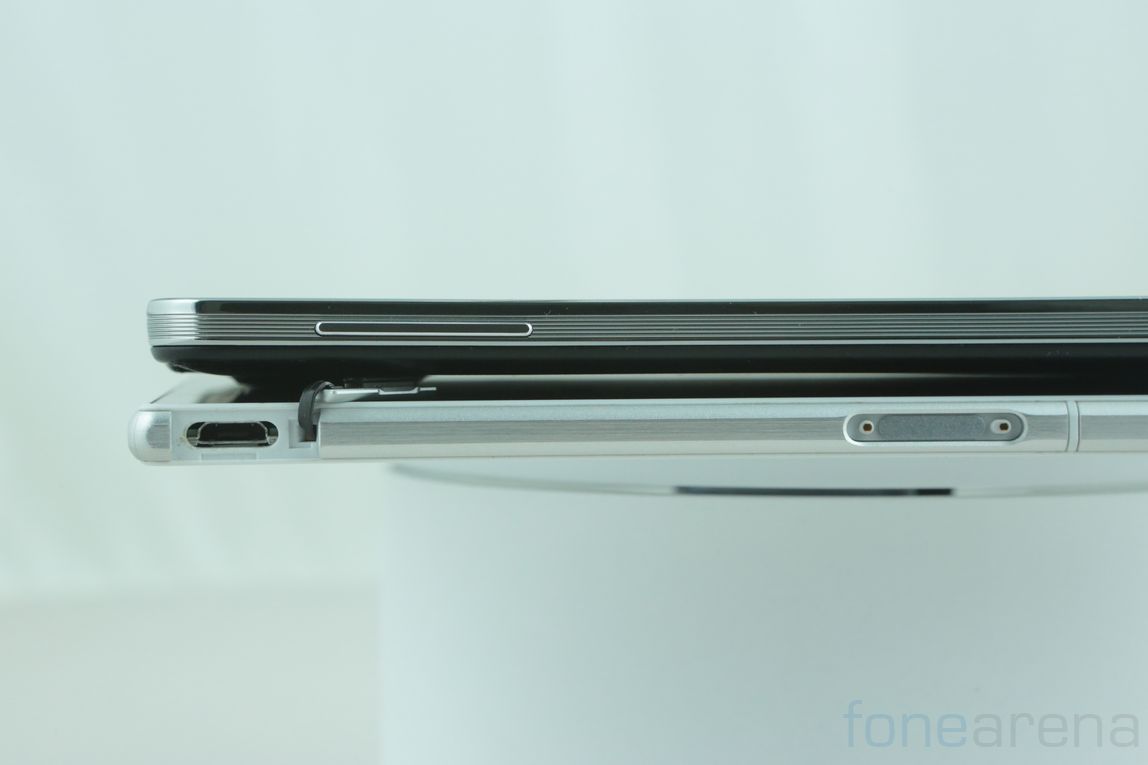 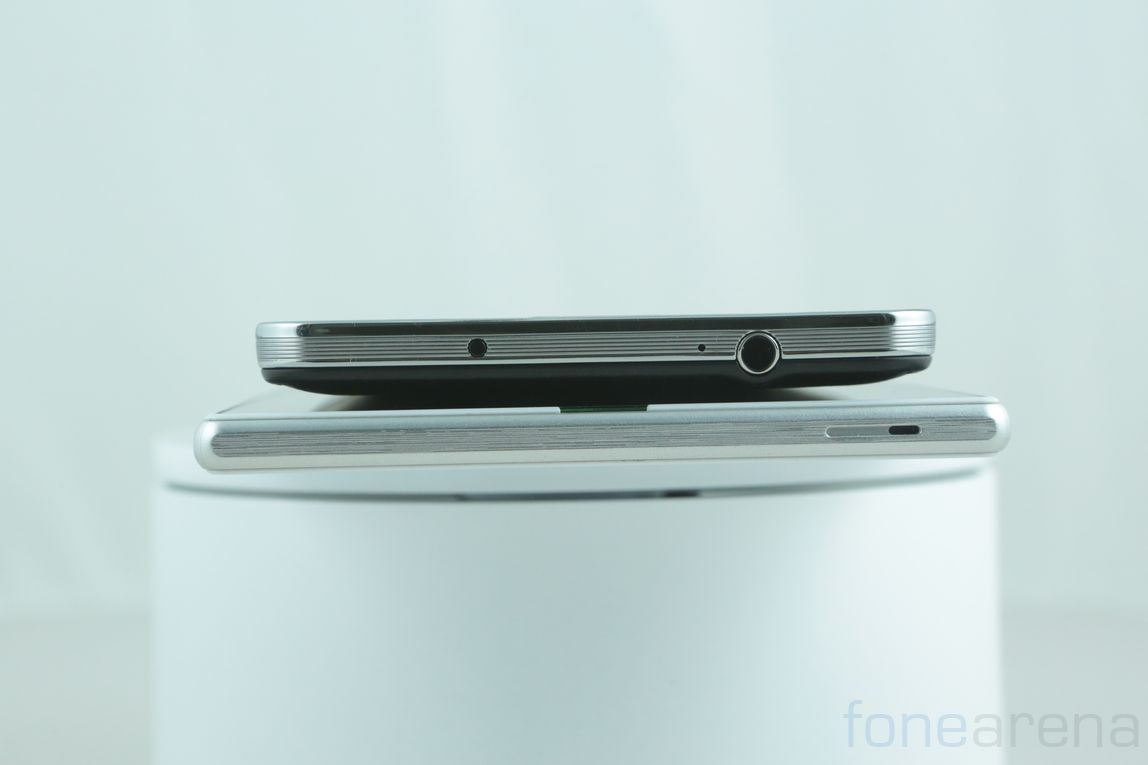 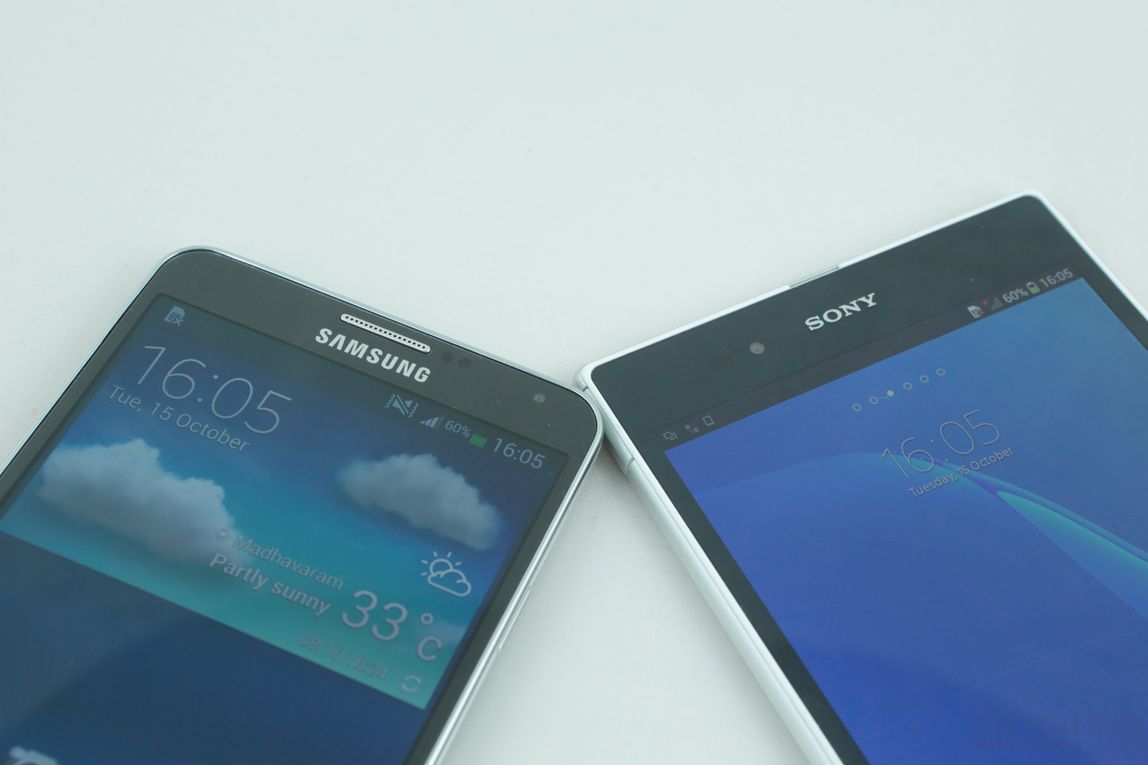 The bezels on Galaxy Note 3 are quite thin and that accounts for the compact design.

Below the display, we have the usual Samsung arrangement with a physical home button at the center and capacitive touch keys on either side of the Galaxy Note 3. On the Xperia Z Ultra, there are no navigation buttons and hence all keys are on-screen which occupy valuable screen real estate. 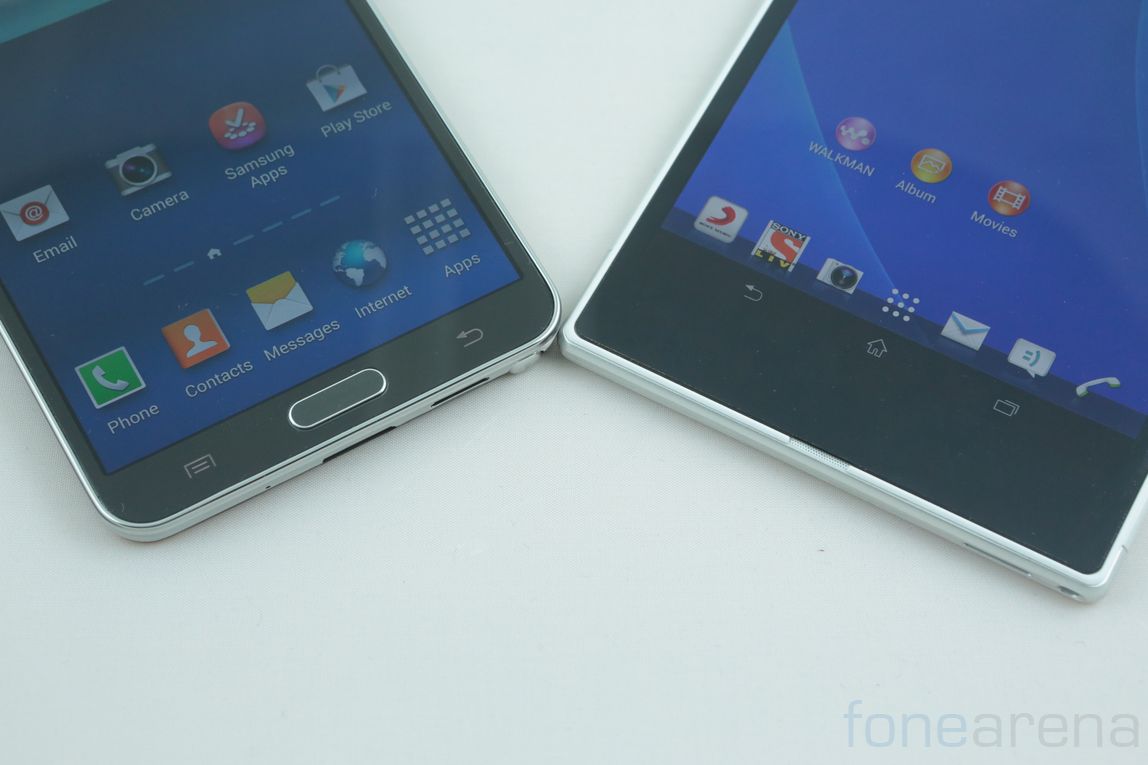 Moving to the back, we see drastic difference between the two giant phones. Galaxy Note 3 has an excellent faux leather finish that gives it a great texture and prevents it from scratches and finger prints. Xperia Z Ultra has a solid glass back which is highly reflective and glossy. Xperia Z Ultra’s back is extremely fingerprint and scratch prone. There is a 13MP camera with an LED flash below it on Galaxy Note 3, while there is just a 8MP camera on Xperia Z Ultra. 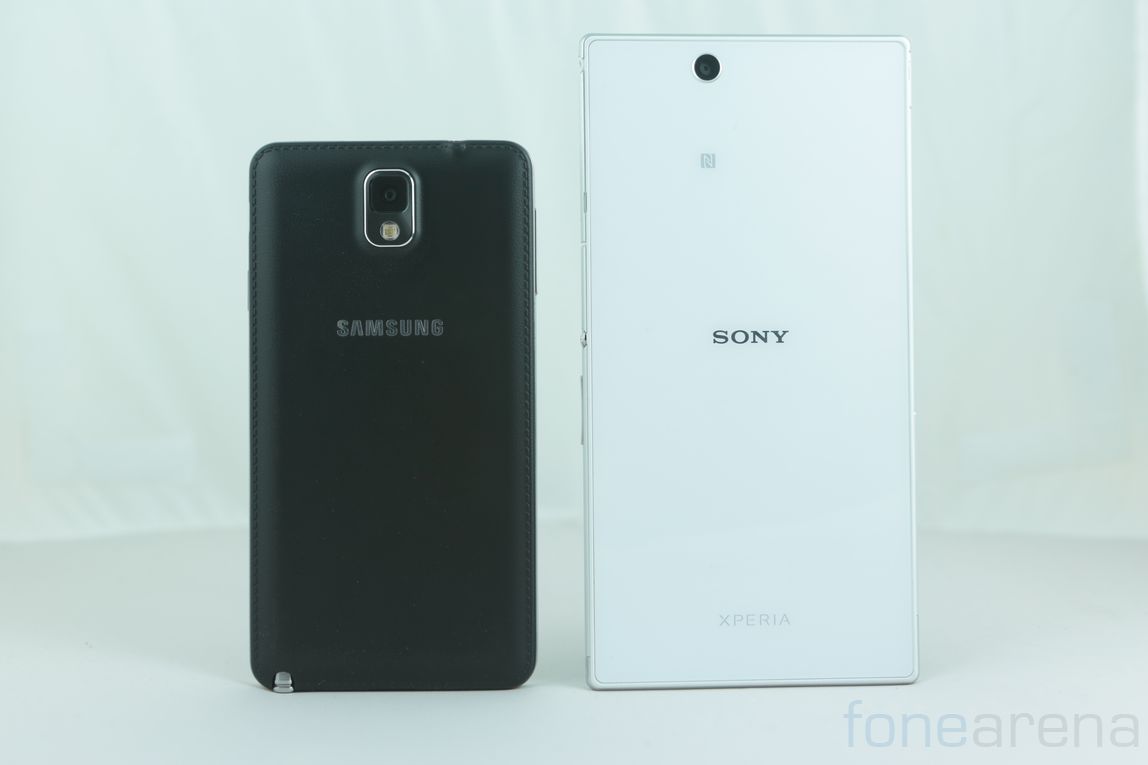 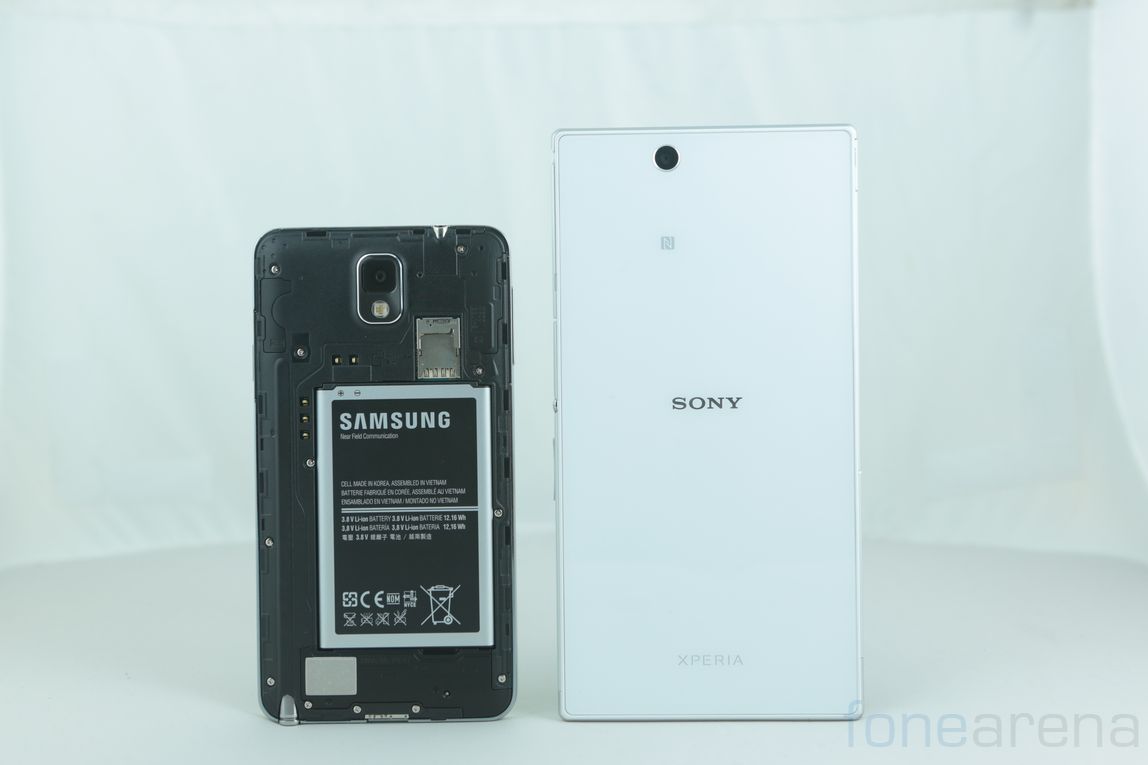 Overall, in terms of build quality and design, Samsung Galaxy Note 3 seems better because of its compact design and a durable, but solid plastic body with faux leather back. Galaxy Note 3 feels much better and more comfortable in the hands. Sony Xperia Z feels unnaturally big in the phones, but has the advantage of being and water and dust resistant. 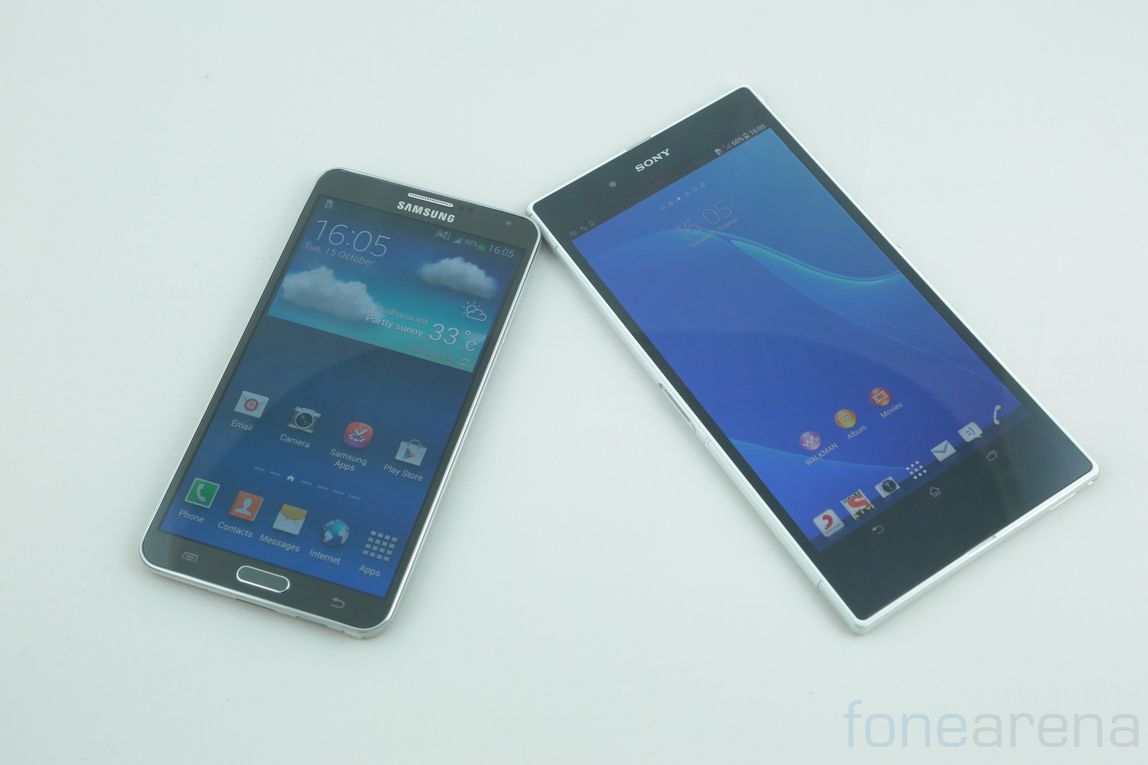 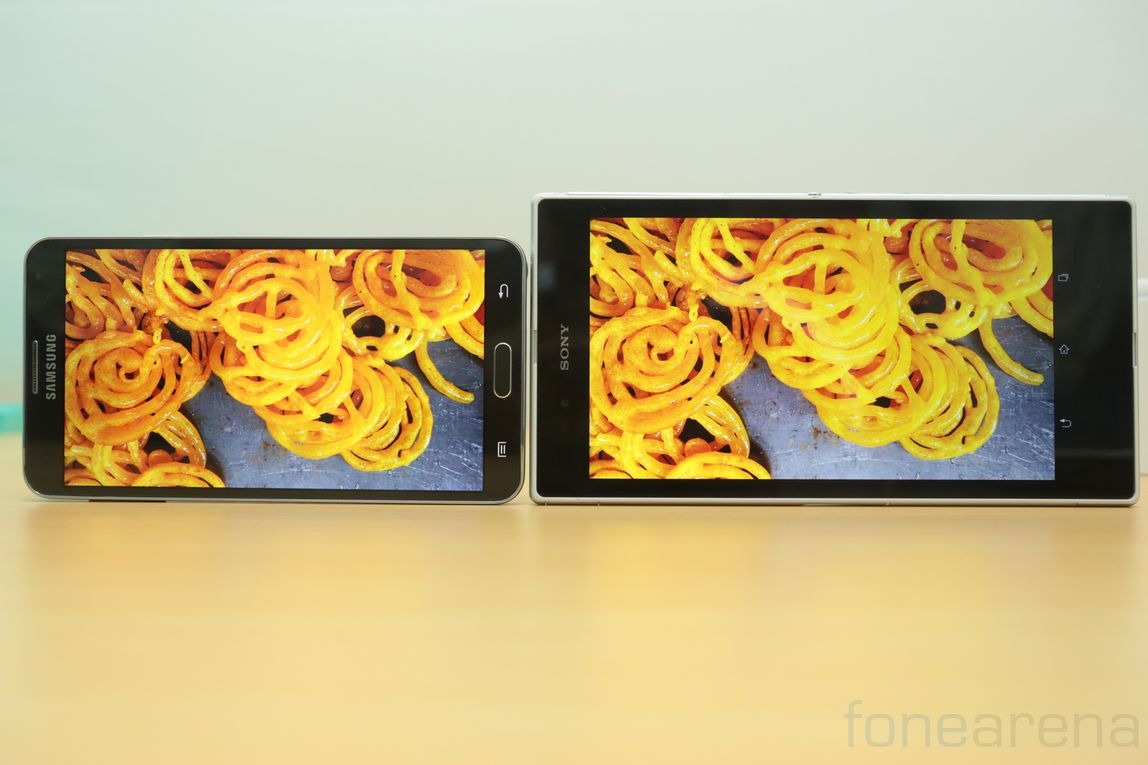 In terms of display quality, both the displays are great, but the bigger size and truer colors on the Xperia Z Ultra give it an advantage.

Samsung is known to use its home-bred Exynos chipset for its premium devices and rightly so the Samsung Galaxy Note 3 is powered by a 1.9GHz octa-core Exynos 5420 SoC, 3GB and Mali T628 MP6 GPU while the Xperia Z Ultra is powered by a powerful Snapdragon 800 SoC, has 2GB RAM and Adreno 330 GPU for graphics. 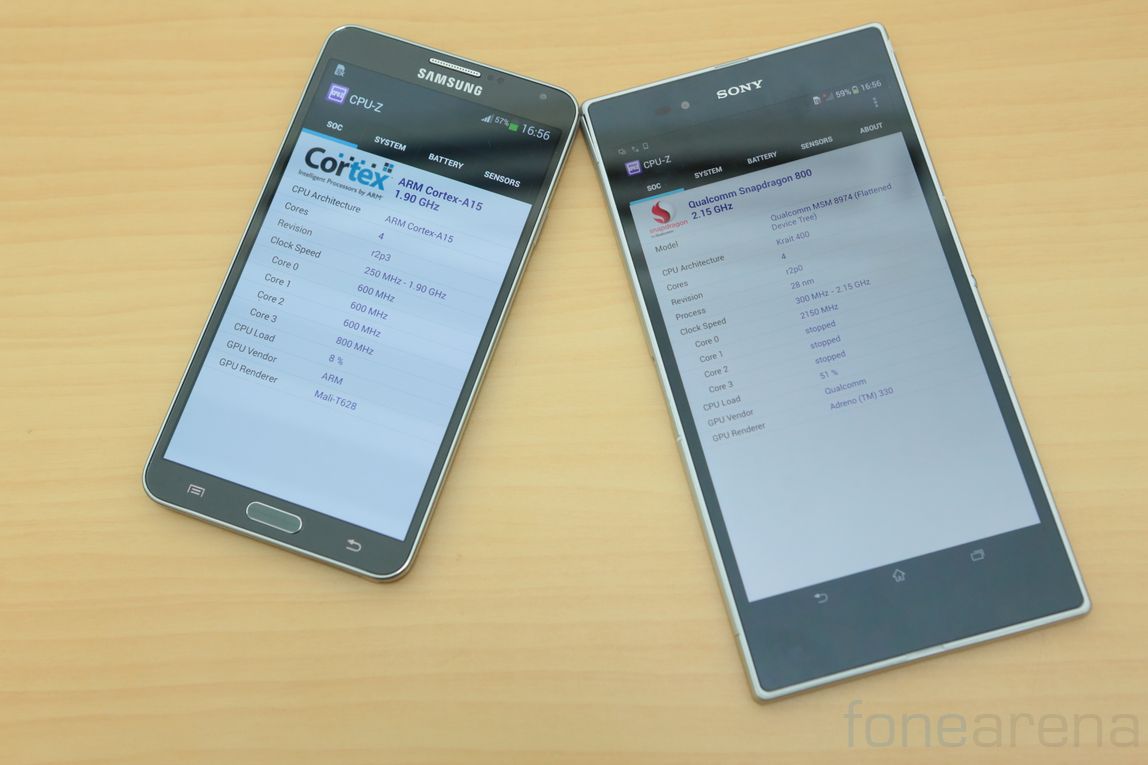 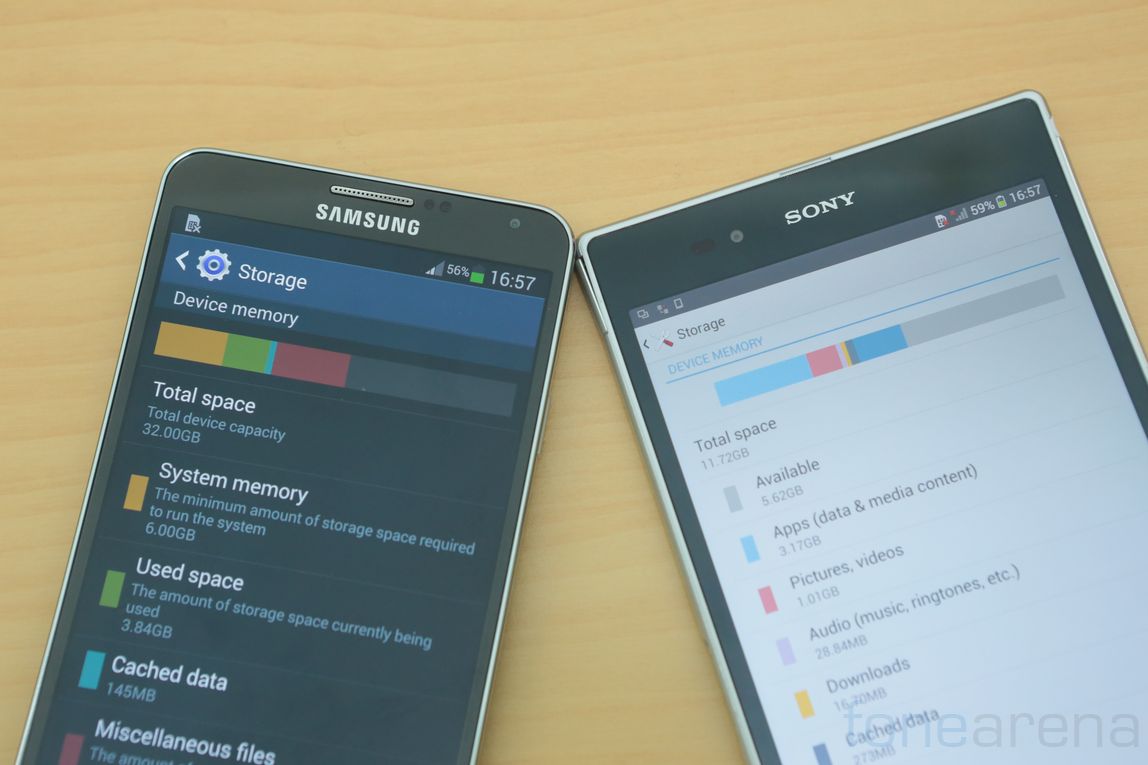 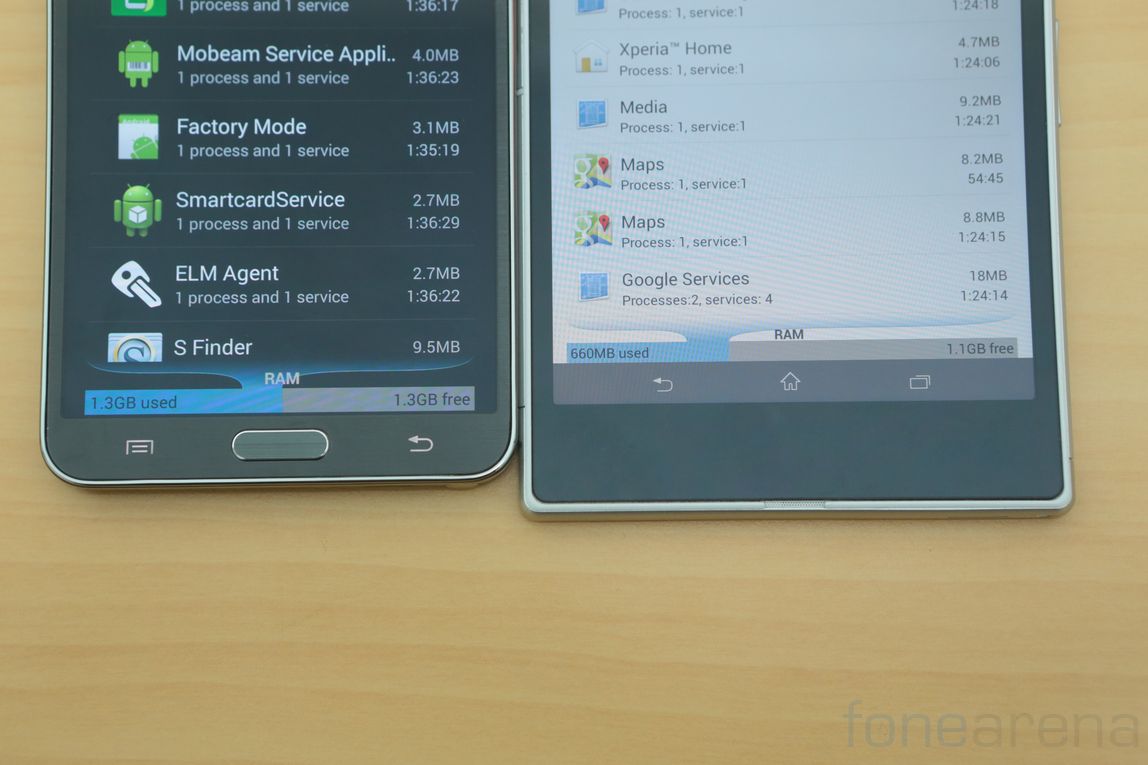 In terms of day to day performance, both the phones are quite snappy and there is hardly a moment you will notice any difference between the two.

In benchmarks, the both the giants are top of the charts with nearly equal scores in all the benchmarks. 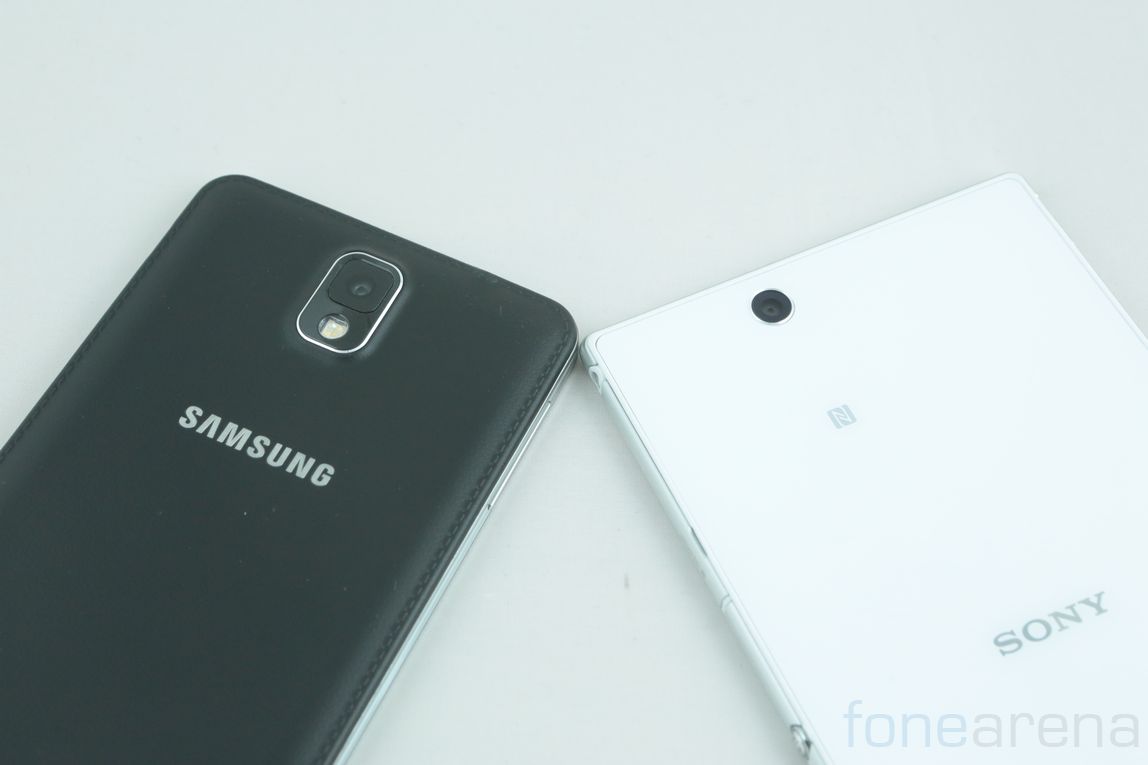 In terms of camera UI, both the phones are drastically different as the Galaxy Note 3 has a camera app similar to the one on S4 and S4 Zoom. Xperia Z Ultra on the other hand has a typical Sony camera app that comes with Superior Auto mode. Galaxy Note 3 has various shooting modes like Surround Shot, Golf Mode, HDR, Panorama, Best face, Best photo, Sports Mode, Eraser Mode, Animated Photo, Drama Mode and Sound&Shot mode. 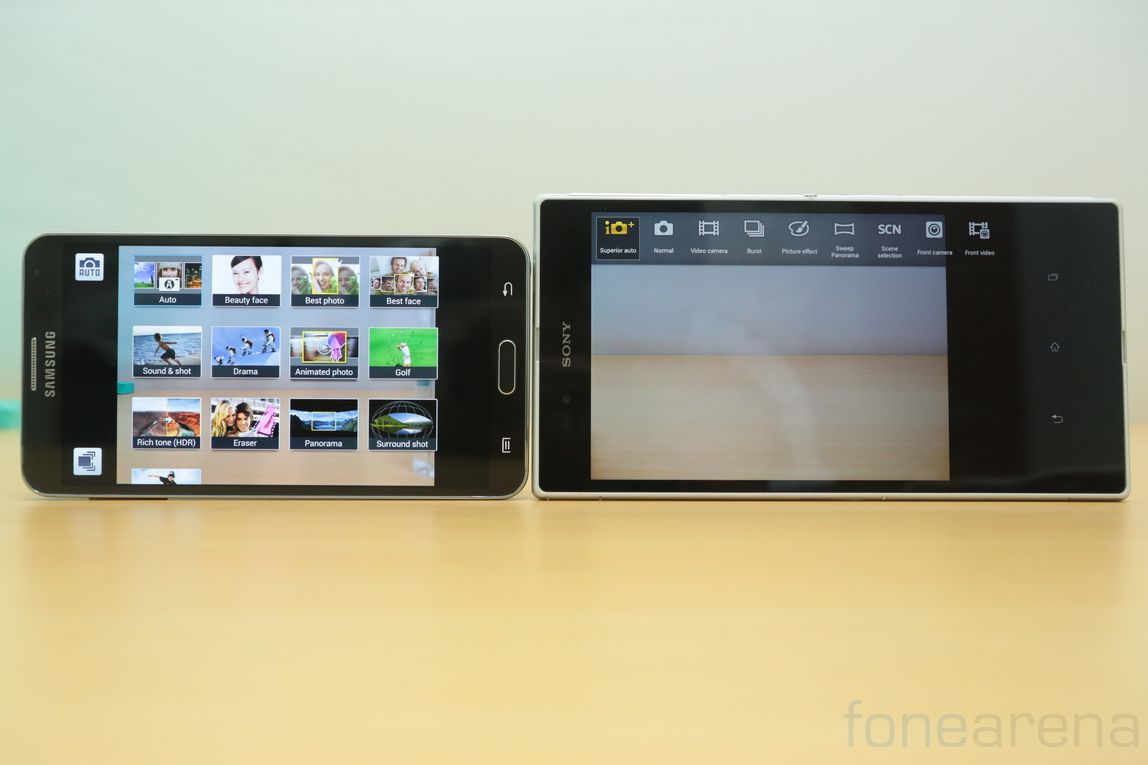 The image quality is much much better on the Galaxy Note 3 because of its better sensor and higher resolution.

Galaxy Note 3 runs on Android 4.3 Jellybean which is overlaid by Samsung’s TouchWiz UI. Z Ultra runs on Android 4.2.2 Jellybean and has Sony’s UI. Galaxy Note 3 comes with a ton of Samsung specific features like Smart Stay, Smart Rotation, S-Beam, Multi-windows, Airview, Pop-out videos, Air Gesture, Smart Scroll, Smart Pause and a Reading mode that optimizes the screen for reading and is available when certain applications like Google Books are opened. The main distinguishing feature of the Note 3 is its S-Pen stylus that lets you perform a lot of creative functions. It is a great tool for note taking and Note 3 features a new S-Note app. There is also an Action Command option pops up allowing the users to access basic S-Pen functionalities with the click of a button on the S-Pen. When compared to Samsung’s ton of software features, even the biggest phablet Xperia Z Ultra looks tiny. 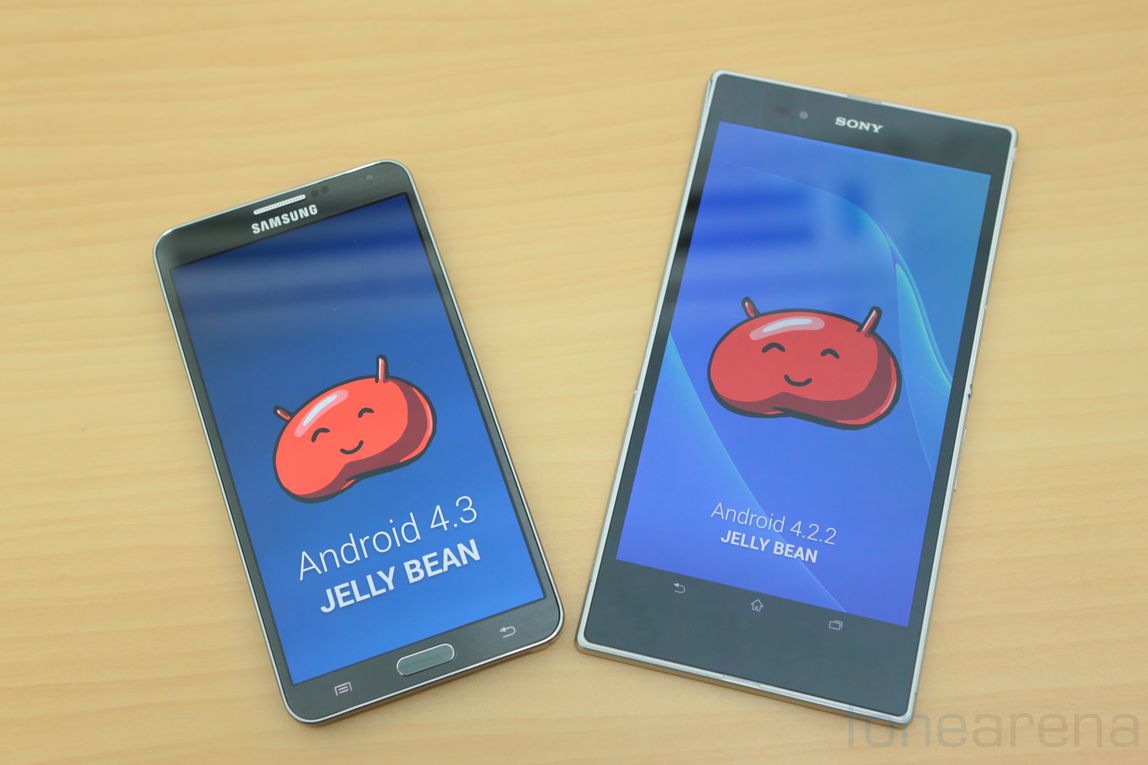 Software features in Samsung Galaxy Note 3 start with the enhanced S-Pen functionality. As soon as you take out the S-Pen, an Air-command menu appears on the screen(this can be opened by pressing the button on the S-Pen as well) and it lets you one of the five actions – Action Memo, Scrap Booker, Screen Write, S-Finder and Pen Window. Action Memo lets you take notes and use these notes based on their content, Scrap Booker lets you save content from the screen, Screen Write lets you write on the screen, S-Finder helps you find files within your device and Pen Window is the best of all that lets you create a window of any size on the screen and fits certain apps inside it. It can be great for multi-tasking. To know more about the software features of Galaxy Note 3, check out our video below.

Sony Xperia Z Ultra comes with Sony’s small apps which can be accessed by pressing the third navigation key that also opens the list of already open apps. There are various small apps like calculator, recorder, timer, bookmarks and so on. You can open any number of these apps at a time and have them on screen. They are always present on the screen unless you close them. Instead of closing them, you can drag them to the right side of the screen where they become small icon and attach themselves to the right side of the screen. On clicking those minimized icons, they are visible again. These small apps can be very useful for taking down notes and doing small things in a fast manner. Instead of giving a stylus, Sony have added support for any pointed device that can be used to write on the display of Sony Xperia Z Ultra. 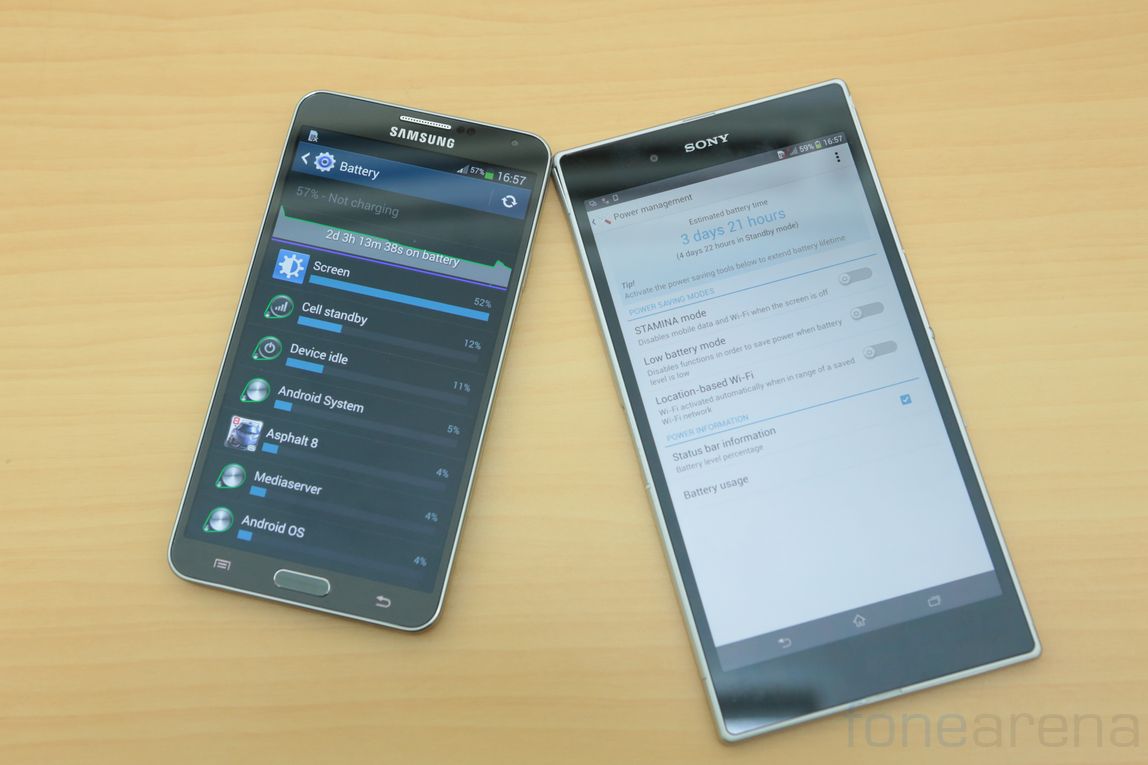 In terms of connectivity, both the devices are equipped with features like WiFi (802.11 b/g/n/ac, Bluetooth, 3G, NFC, DLNA, WiFi Direct and microUSB(MHL) connectivity. Galaxy Note 3 is the first device to come with USB 3.0 port which supports better speeds. You can check out the USB 3.0 connectivity demo video right below. 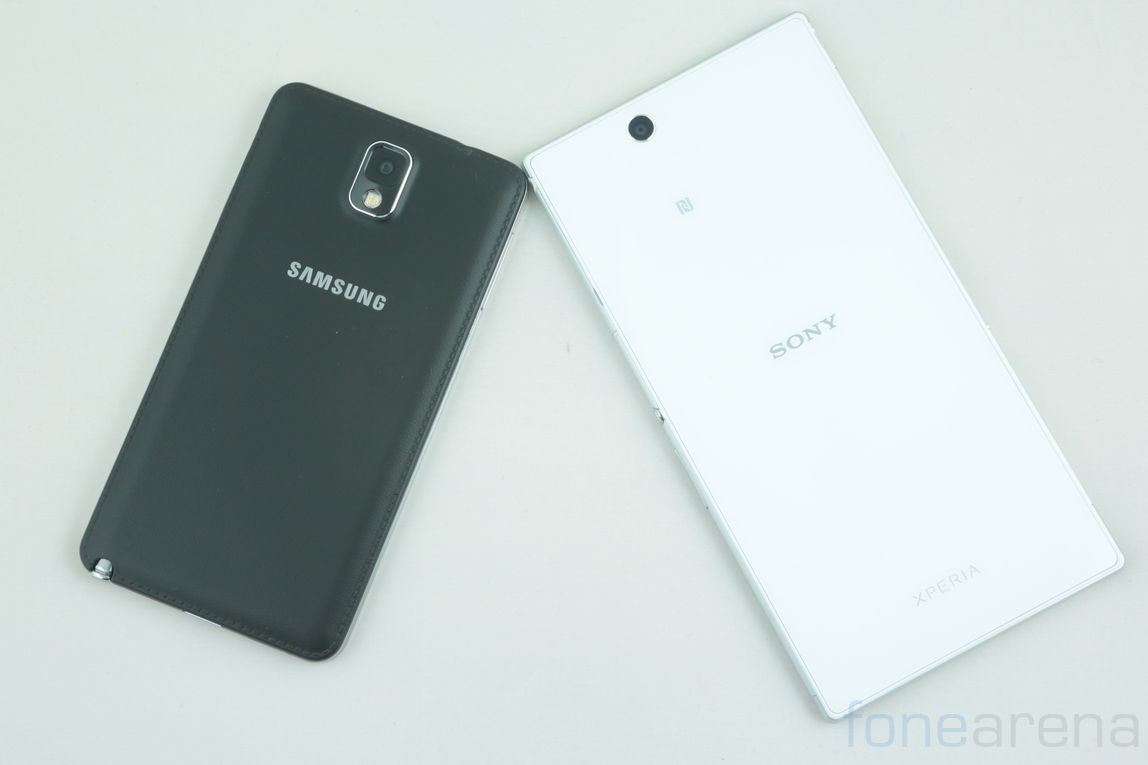