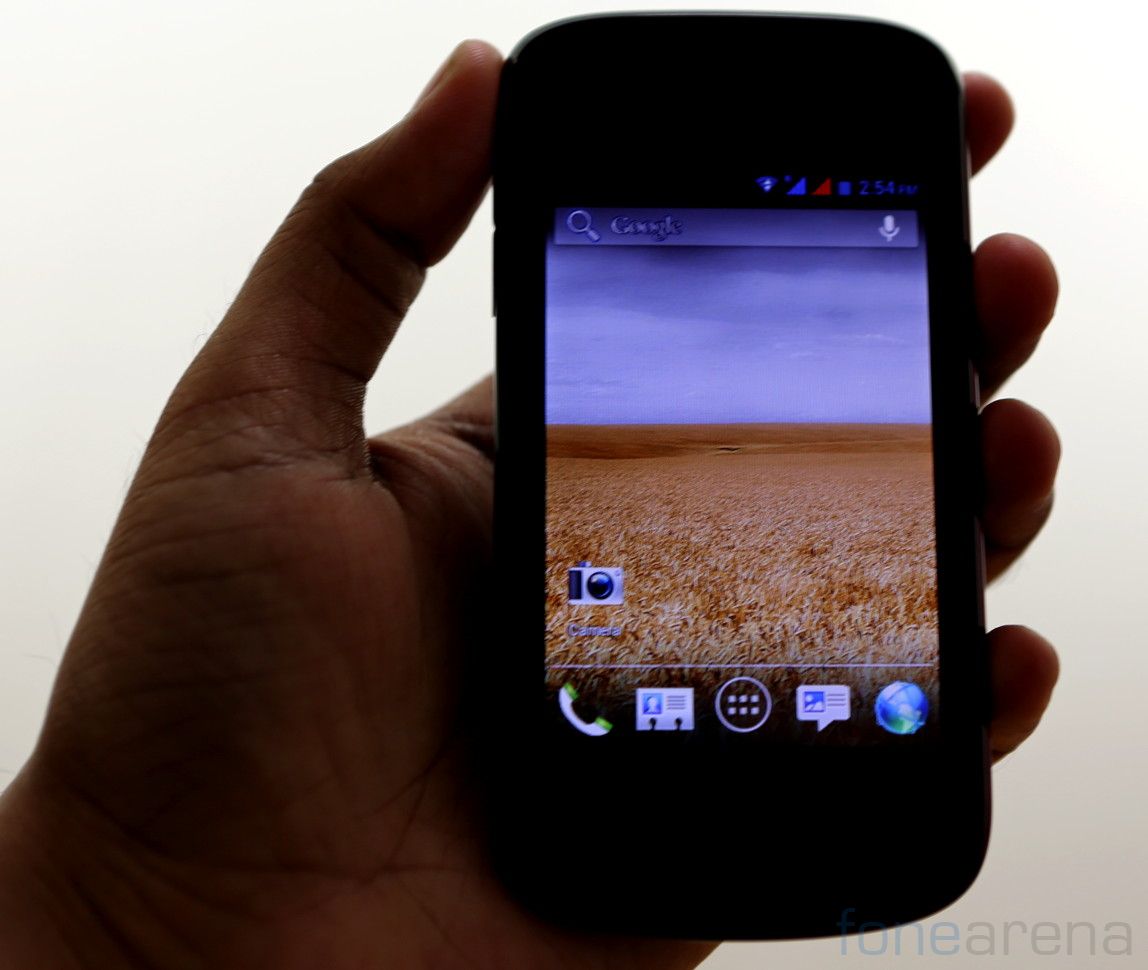 Intex launched the Cloud X3, the cheapest Android smartphone for Rs. 3790 running on Android 4.2 (Jelly Bean) recently. We brought you the unboxing and benchmarks of the recently, here we have the complete review of the device. This is the first device to launch in India to be powered by a dual-core 1GHz MediaTek MT6572 chip. Soon after it other companies started launching affordable smartphone with this chip running on Android 4.2 and just 256MB of RAM. Is this device really worth the price ? Let’s check it out in the review. 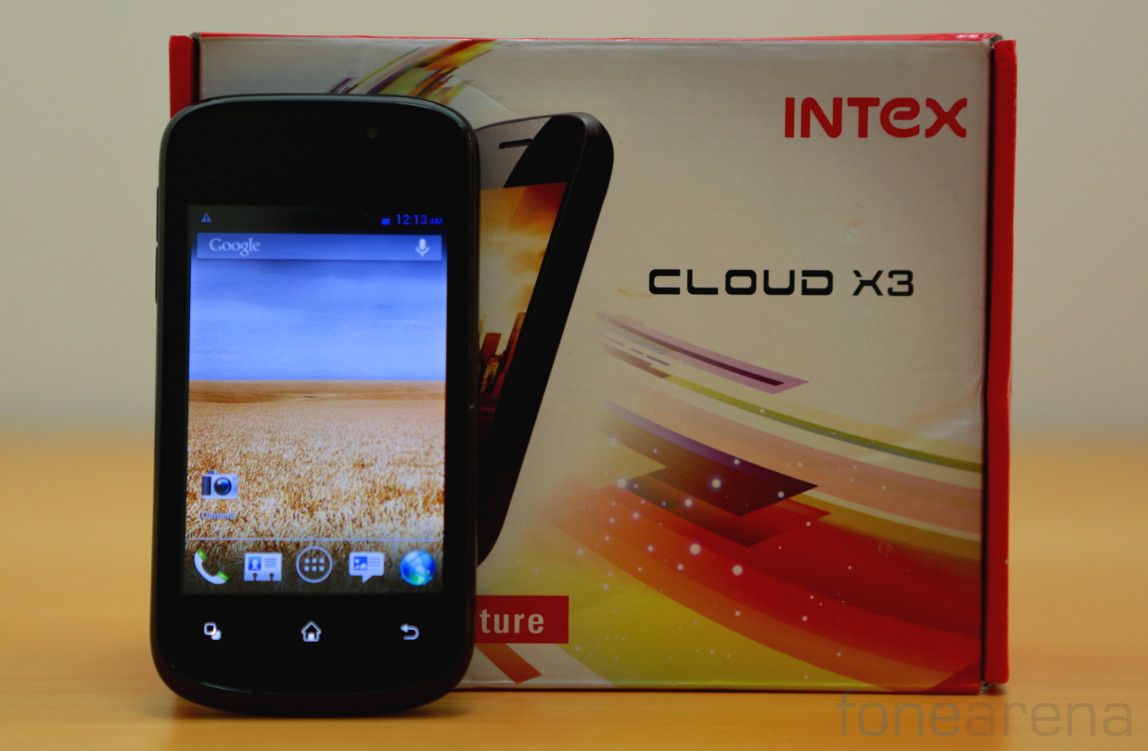 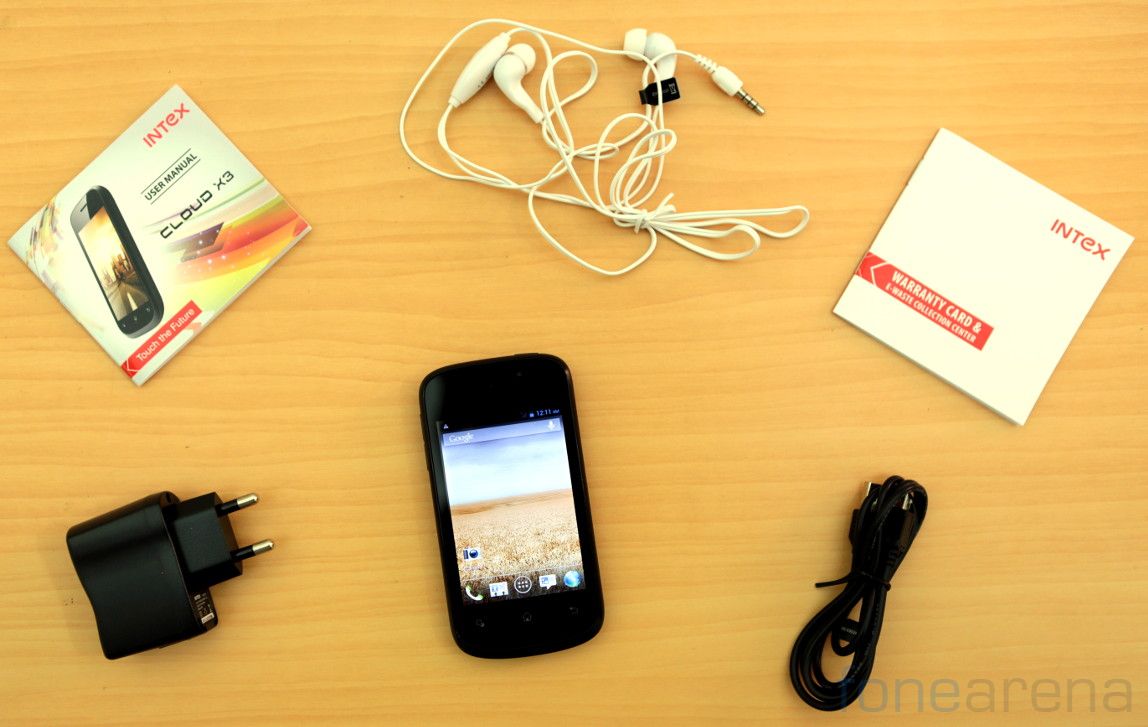 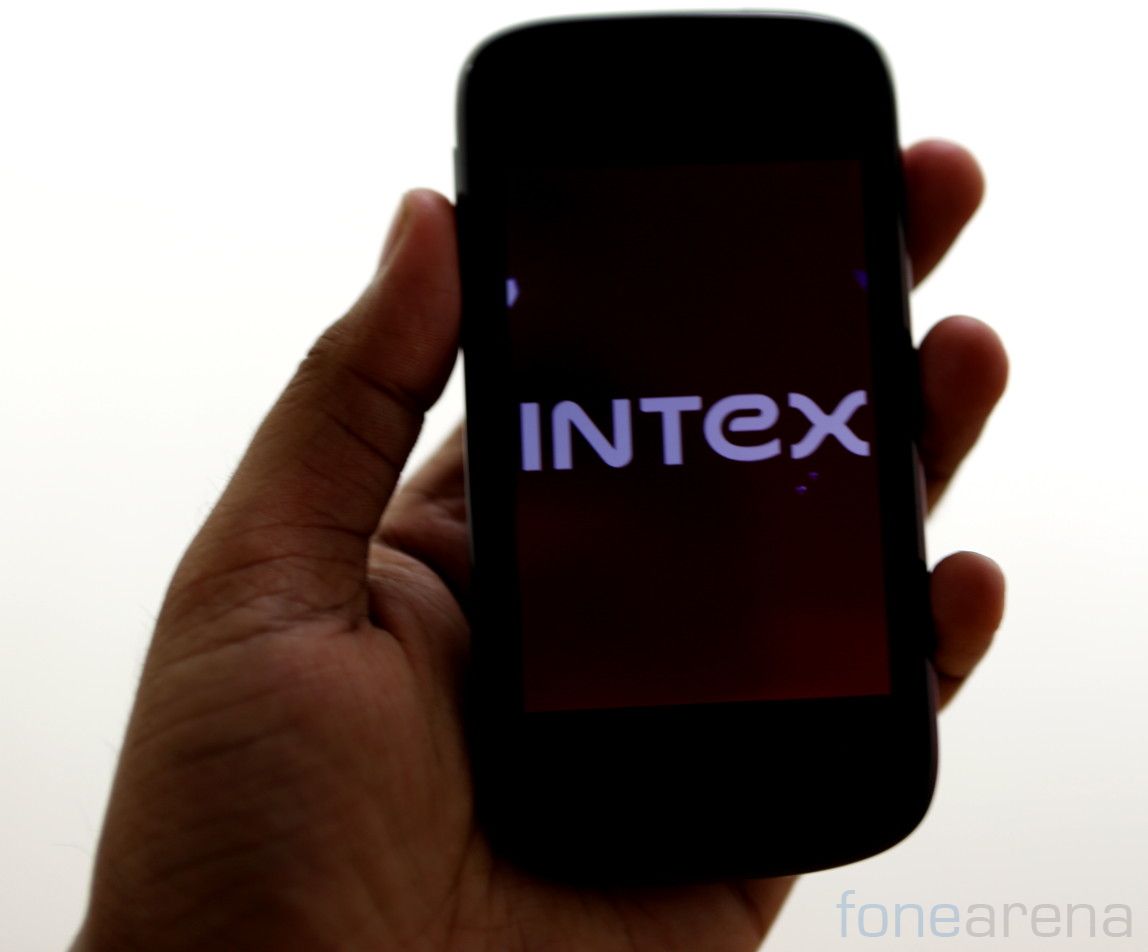 The phone has a 3.5-inch (320 x 480 pixels) 256k colour capacitive multi-touch display at a pixel density of 165 ppi. Even though the display is bright, the viewing angles are poor. The sunlight legibility is poor too. The touch screen is not very responsive, so it might be hard while using the keyboard. Since the display is shiny, it is prone to smudges. 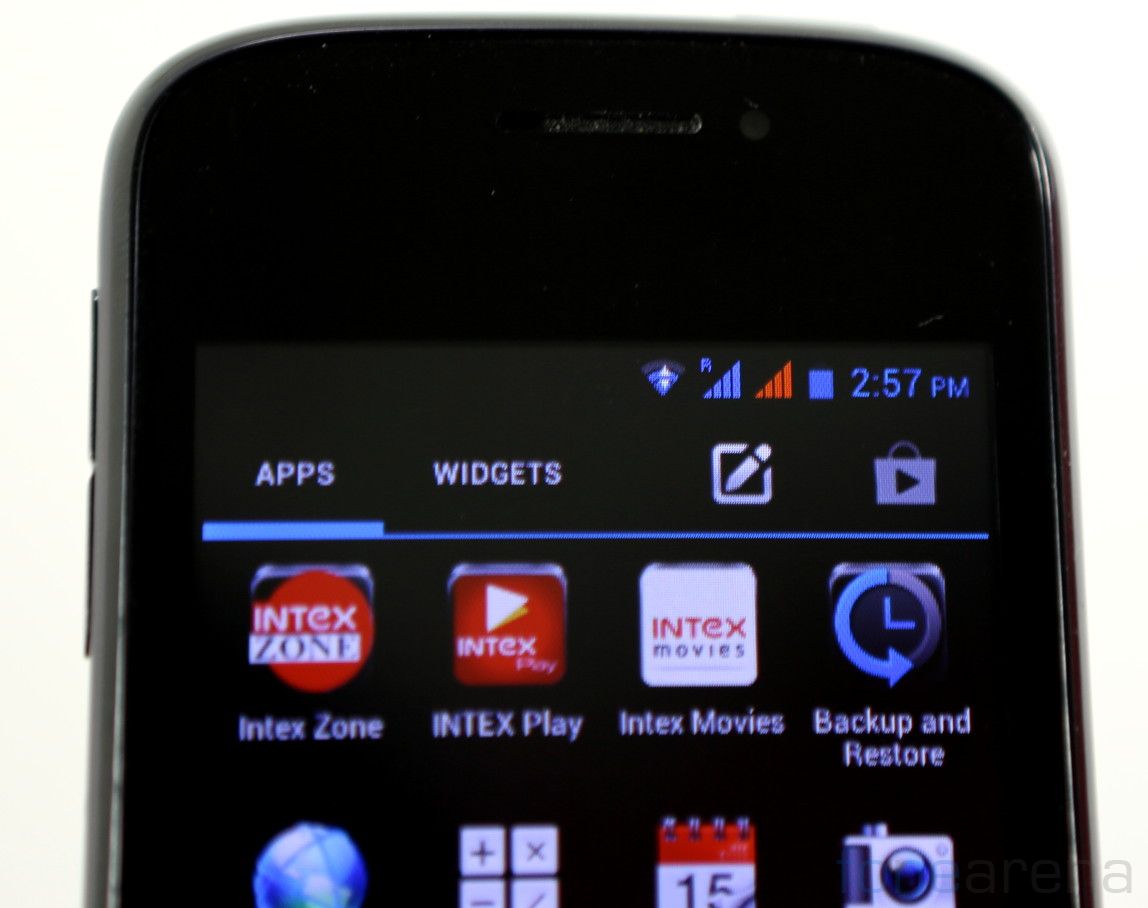 There is a 0.3-megapixel camera on the top, next to the ear piece. The phone lacks the usual proximity and ambient light sensors. 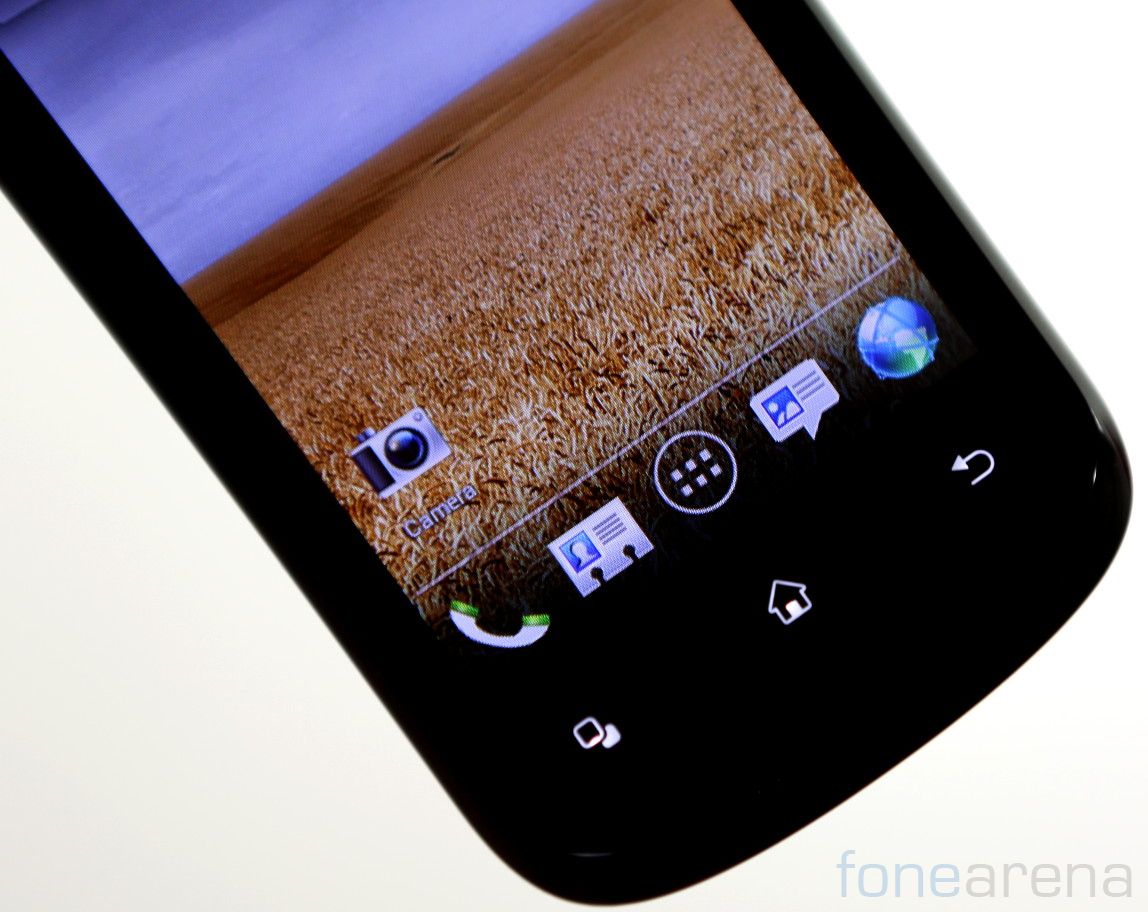 There are capacitive touch buttons for menu, home and back, below the display. These are backlit and offer haptic feedback when pressed.

Volume rocker is present on the left side. There is nothing on the right side.

The power button, micro USB slot and the 3.5mm audio jack are crammed on the top. There is nothing on the bottom. 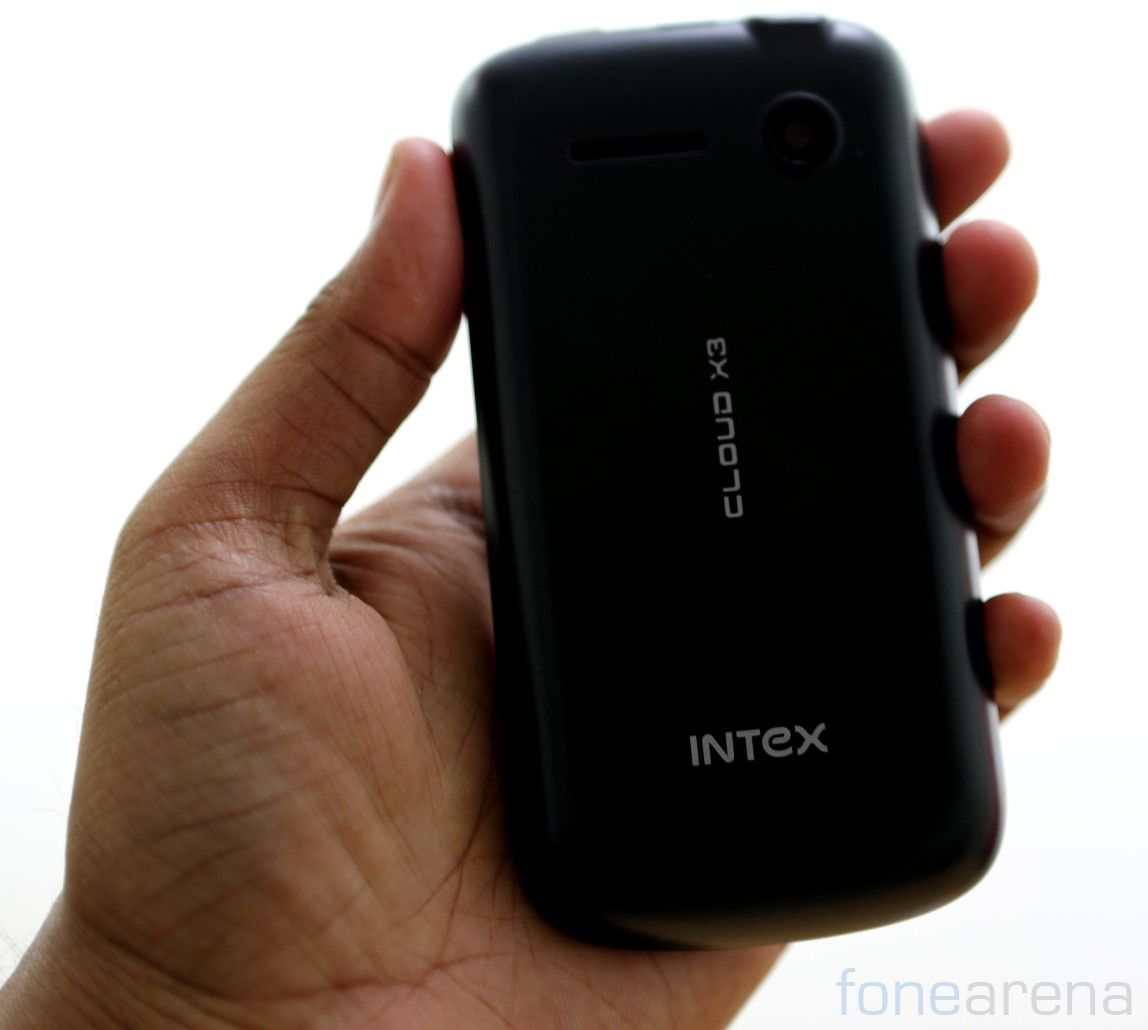 The phone has a plastic back cover with Intex and Cloud X3 branding. It is comfortable to hold, but the back cover is prone to smudges since it is shiny. 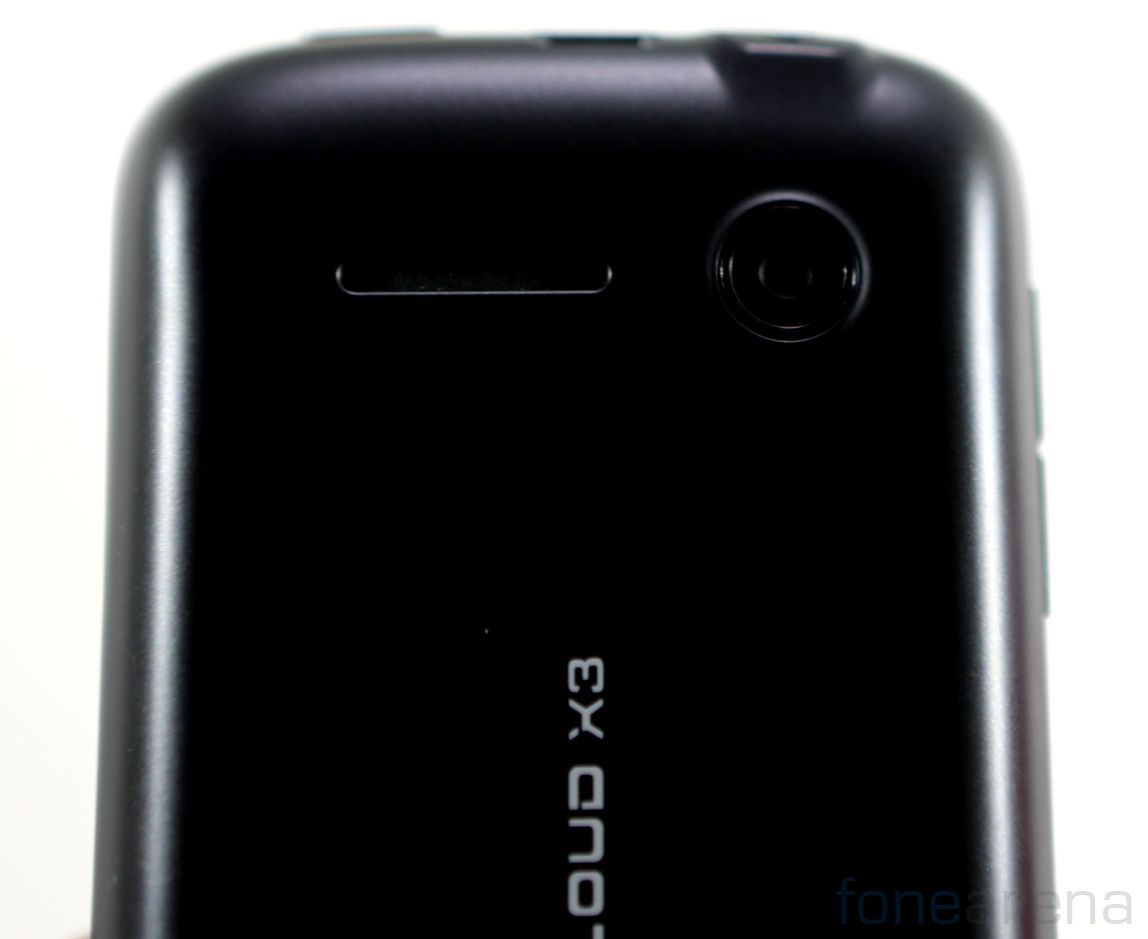 There is a 2-megapixel fixed-focus camera on the back along with a large loud-speaker. 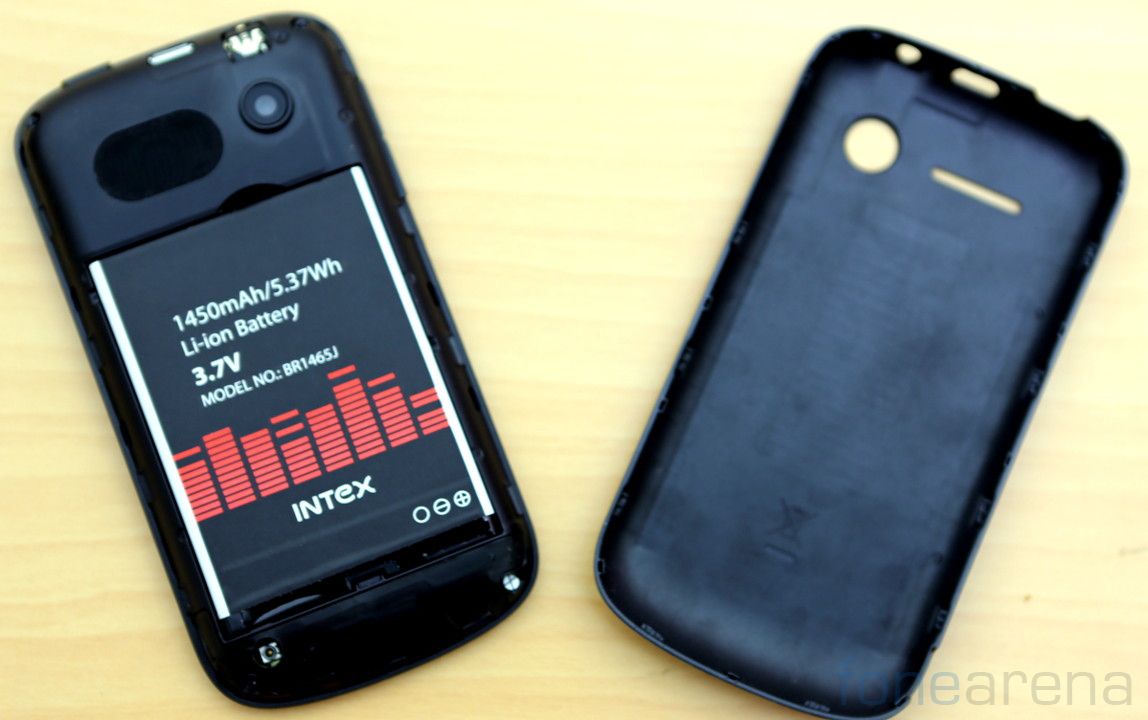 The plastic back cover is a bit hard to remove. Once you remove it, you can see the battery. The SIM and the micro SD card slot are present under the battery. 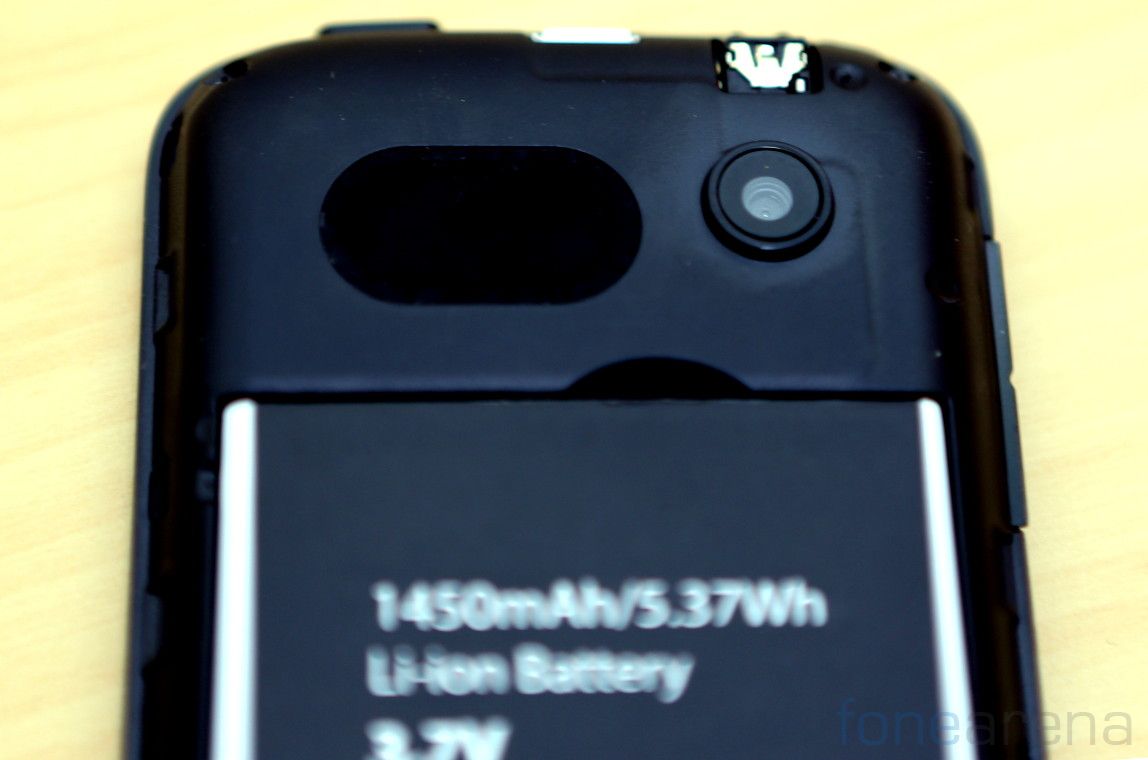 You can see the loud-speaker and the camera module above the back once you open the back cover. 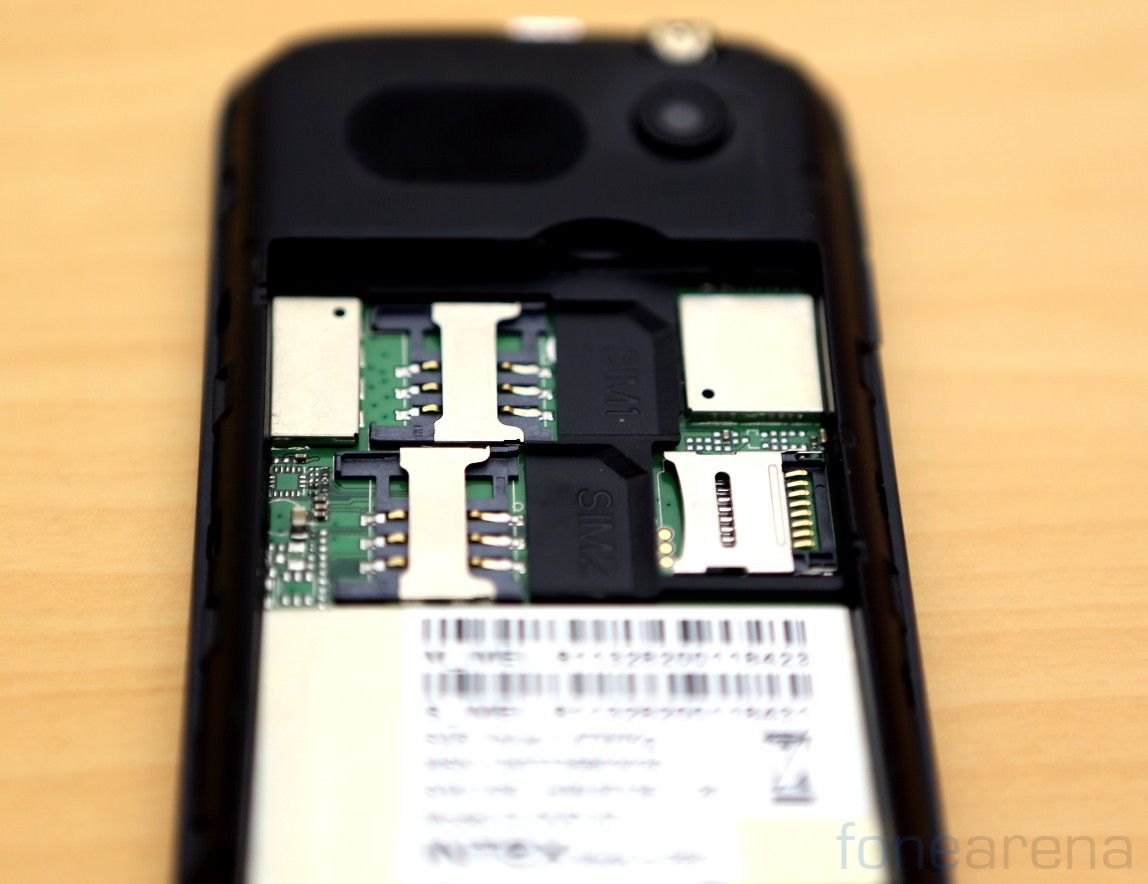 The SIM card slots are present on the left side and the micro SD card slot present on the right side. It uses a standard SIM card. You can expand the memory up to 32GB. We tested a 32GB memory card, which works fine. 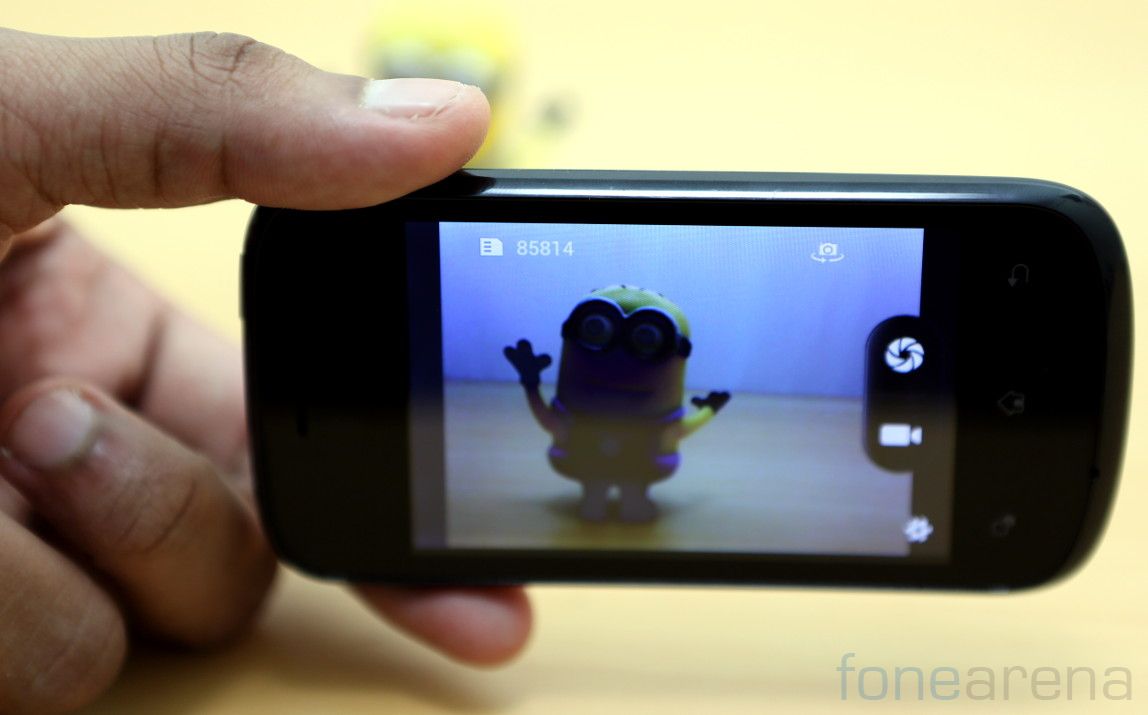 The 2-megapixel fixed focus camera is below average. The camera UI is similar to other phones running on Android 4.2, but the features are limited. You can adjust the exposure and white balance, Change the color effects (Mono, Sepia and Negative) and select night mode. Other options include, Face detection, self timer and option to reduce the image size. Check out some camera samples.

Even though the camera can record videos at 720p HD resolution, the video quality is poor. Other video camera options include, options to enable EIS (software video stabilisation) and change the audio mode to meeting. 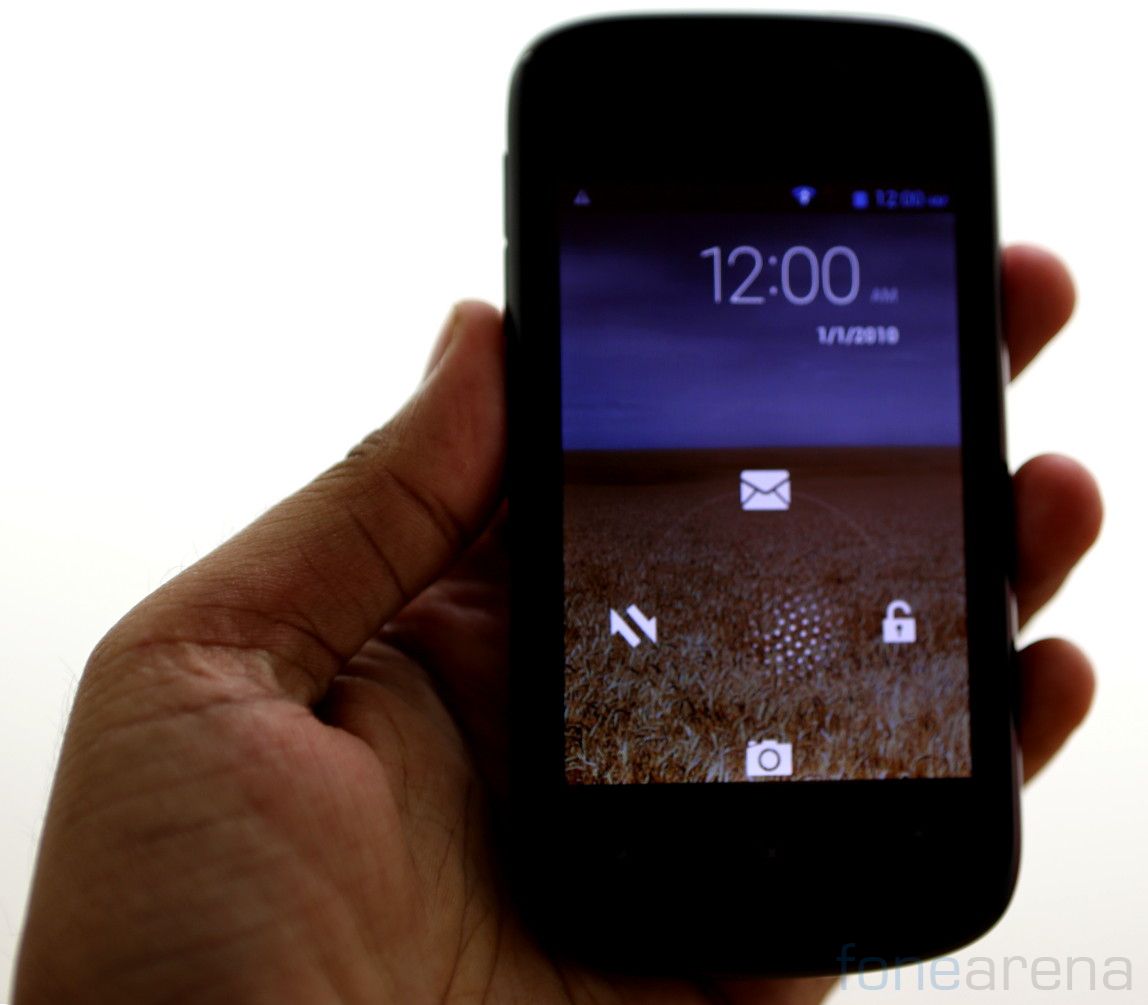 The phone runs on Android 4.2.2 Jelly Bean. So you get a lot of features that are not available on the Android 4.1, including Day dream, Quick Settings, Photo filters in the gallery and more, but it lacks lock screen widgets. You can launch the camera by swiping down from the lockscreen to launch the camera, swipe to the left for dialer and swipe to the top to launch messaging. You have Google Now, but you cannot launch it from the lockscreen or by swiping up from the home button. In addition to the Slide Unlock, you have Pattern, PIN and Password unlock, but Face unlock is missing. 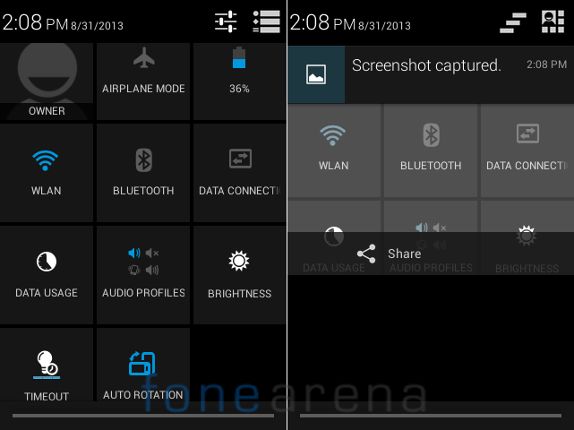 You get the Quick Settings along with the rich notifications. This lets you control WiFi, Airplane mode and Bluetooth. In addition there are shortcuts for Data Connection, Data usage, Audio Profiles, Timeout and Auto rotation that are not available in the stock Android. You can hold some of these quick toggle buttons to get to the advanced settings.

Out of 512 MB of internal storage you get 165MB of user storage. Out of 256MB of RAM, you get 229MB of usable RAM. About 80 to 90MB of RAM is free when the phone is idle. Once you insert an SD card, it becomes the default write disk, so apps get automatically installed in the SD Card. 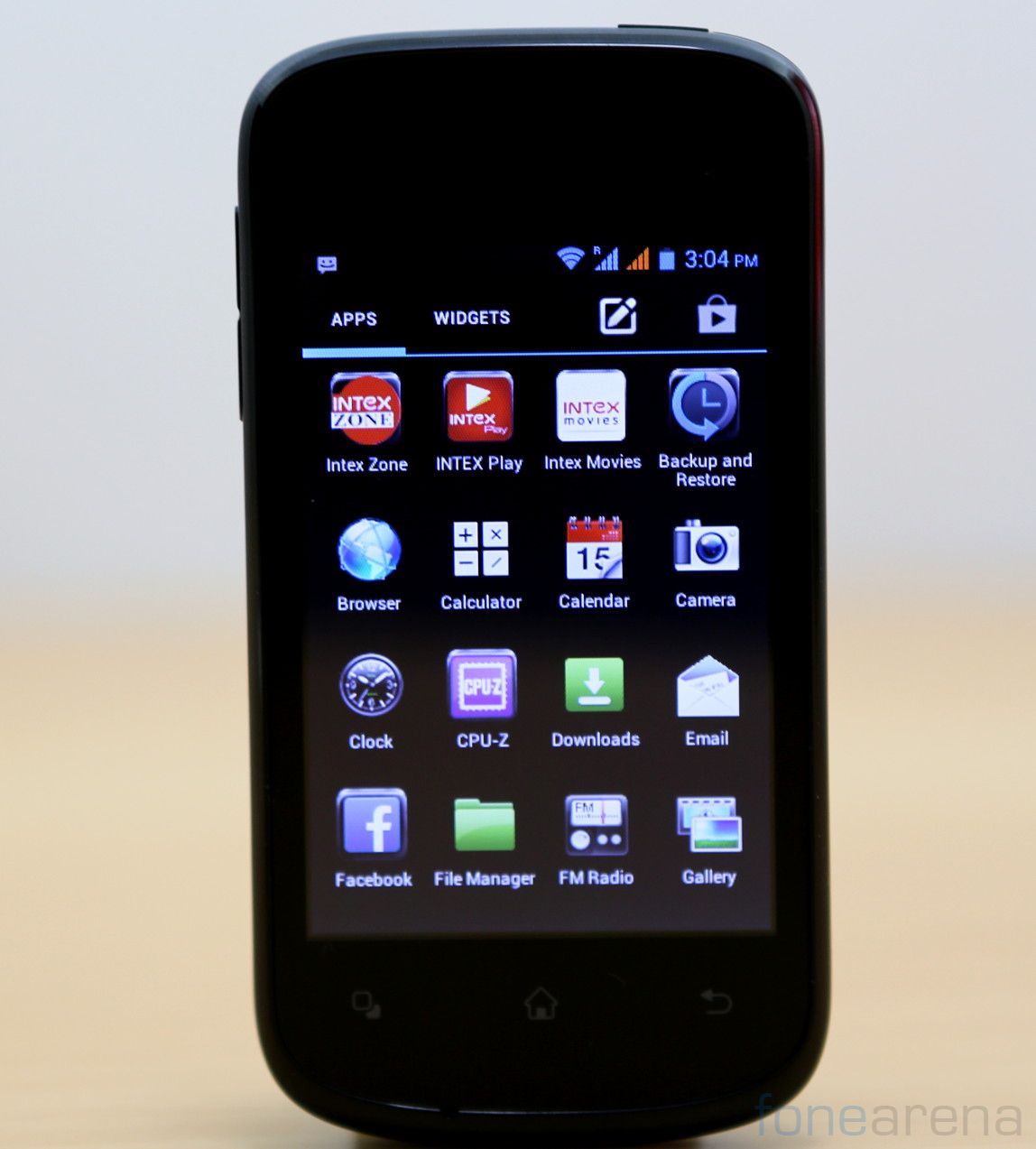 The phone comes with a lot of pre-installed apps.The utility apps include, Calculator, Calendar, Clock, Gallery, File Manager and Sound Recorder. It also comes with the usual set of Google Apps. Other than these you also get pre-installed apps such as Facebook, Hungama music app, Intex Play app store, Intex Zone that has Auto Call Record option and Intex Movies Vault app powered by NQ Mobile that lets you hide Hide SMS, Images, Videos and more. It also couple Racing Moto game. 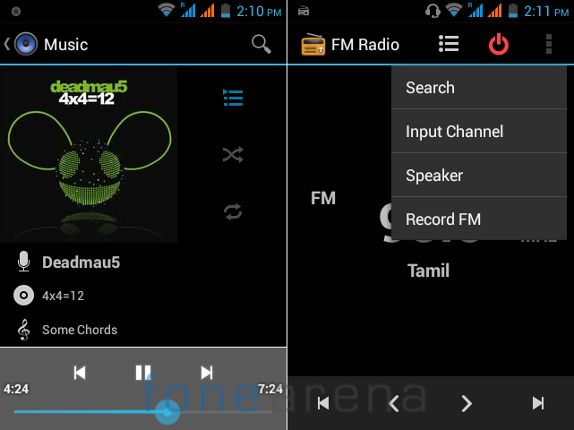 The music player is simple, and can play MP3, WAV, AMR and MID audio formats. The sound effects equalizer settings has different equalizer presets. You can also enable Bass boost and 3D effect features once you connect your earphones. The FM Radio has auto scan, option to record and RDS features. Audio output via earphones is average and the loud-speaker output is good, but the audio gets suppressed when you place the phone on its back. The video player can play 3GP, MP4, AVI videos. The stock video player can handle 720p videos well, surprisingly even 1080p full HD videos played, but it lagged often. 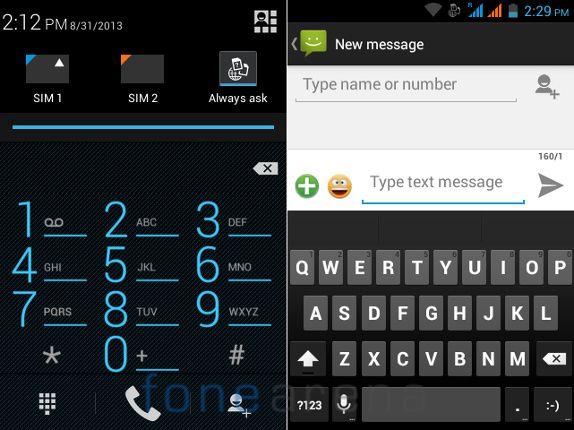 Since this is a dual SIM phone, you get options to switch to either SIM cards from the notification bar. The keyboard is stock, but it doesn’t come with gesture typing like the stock Android 4.2 keyboard. 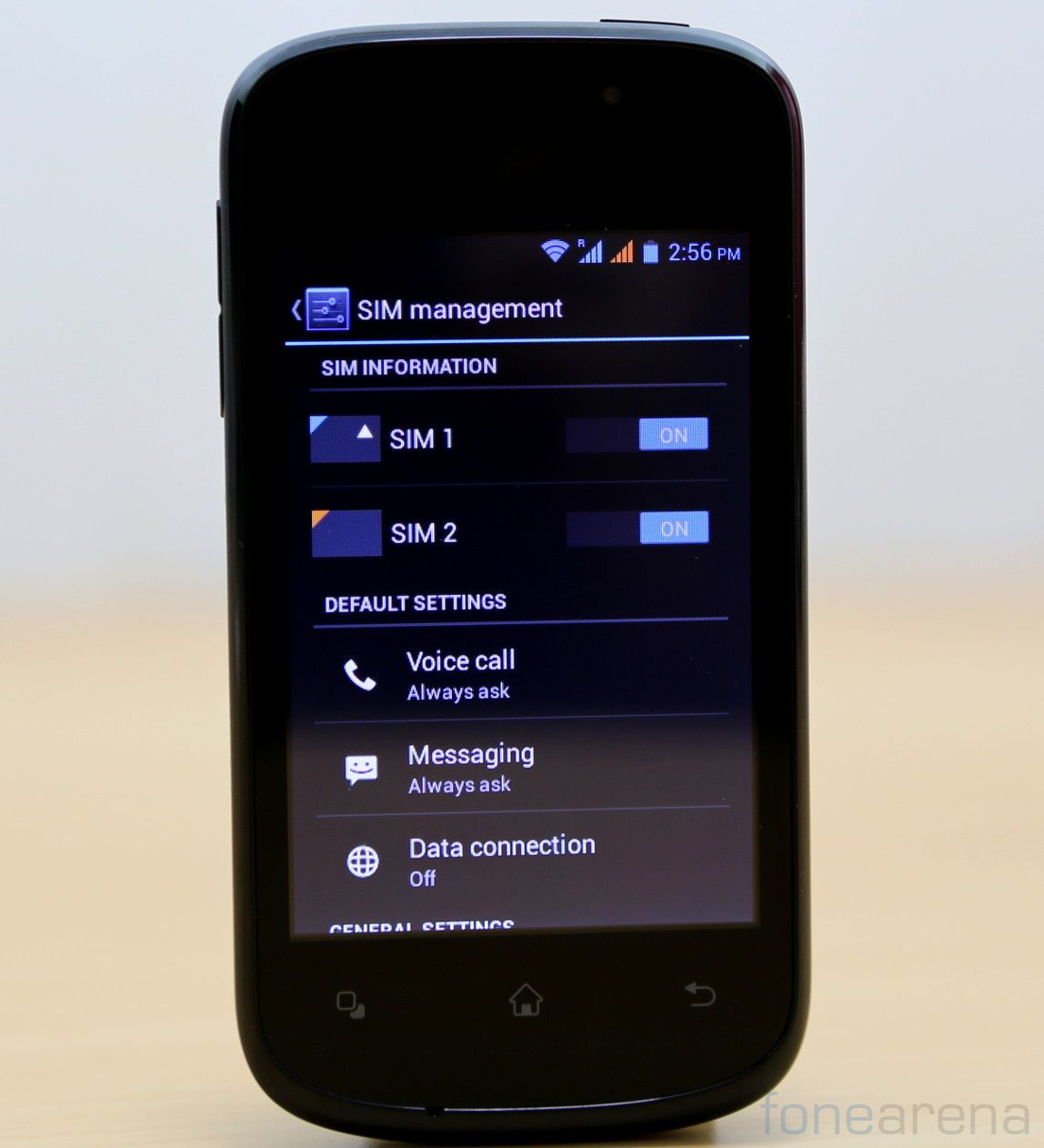 There is a SIM manager option in the settings that lets you set a default SIM for several operations including voice call, video call, Messaging and Data connection. You can also choose ‘Always ask’ option for voice calls and Messaging that gives you option to complete the operation after you choose either SIM cards. 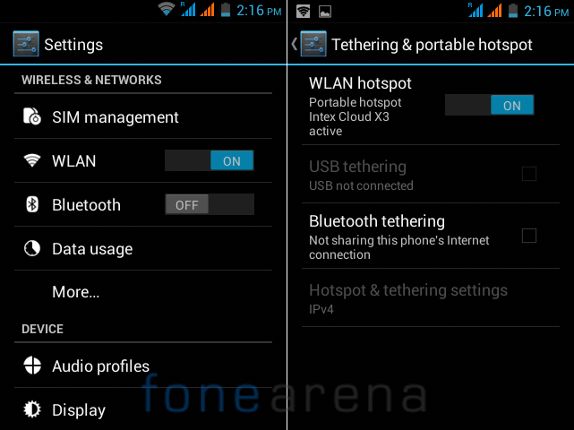 The connectivity features include, 2G (EDGE), Wi-Fi, Bluetooth with A2DP and aGPS. It even has WiFi hotspot, USB and Bluetooth tethering to share your 2G data with other devices. 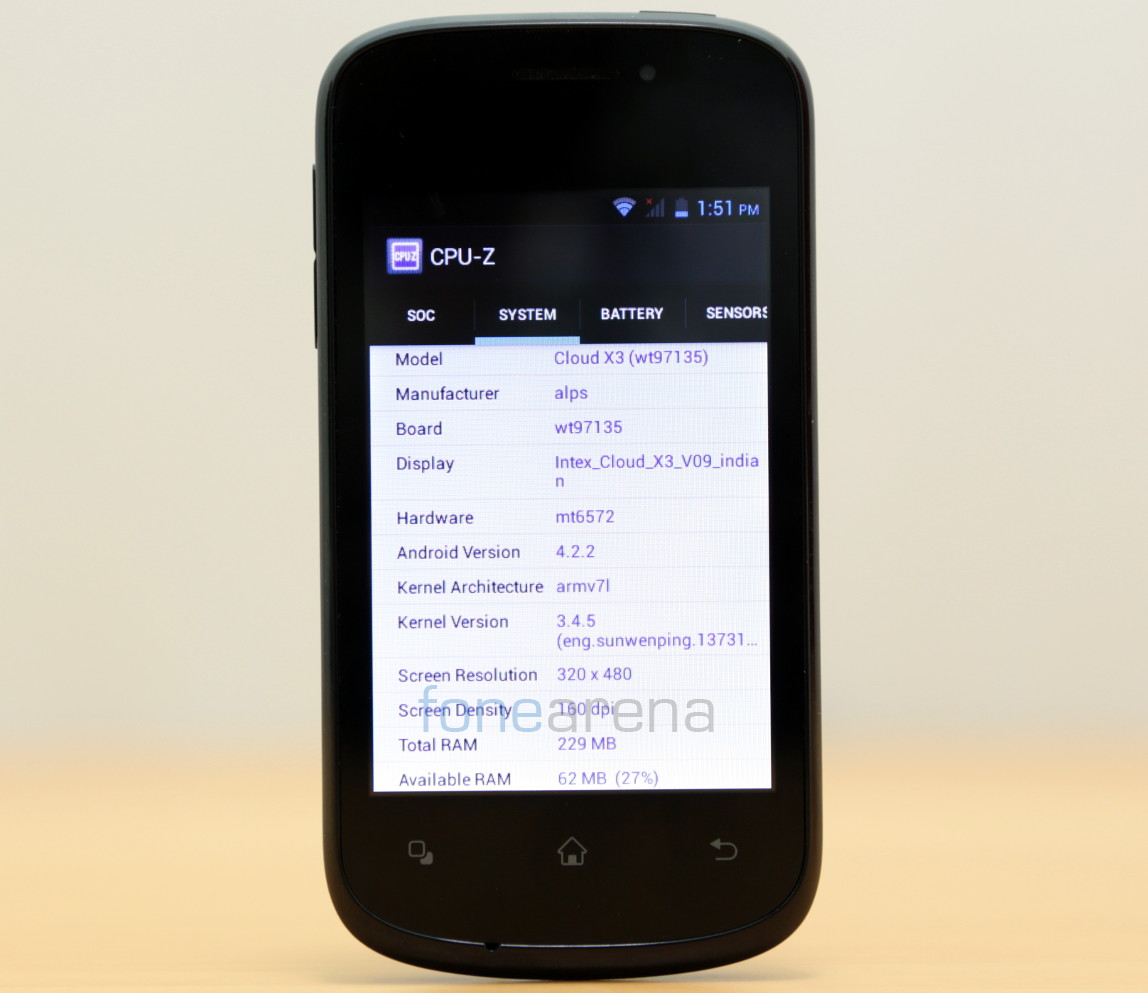 It is powered by the latest 1 GHz dual-core MediaTek MT6572 chip with Mali-400 MP GPU. It topped most of the benchmarks when compared with some of the Android smartphones powered by a dual-core processor. The UI is smooth until you install few apps. But once you start installing apps, it starts lagging since apps that run in the background eats up the memory. 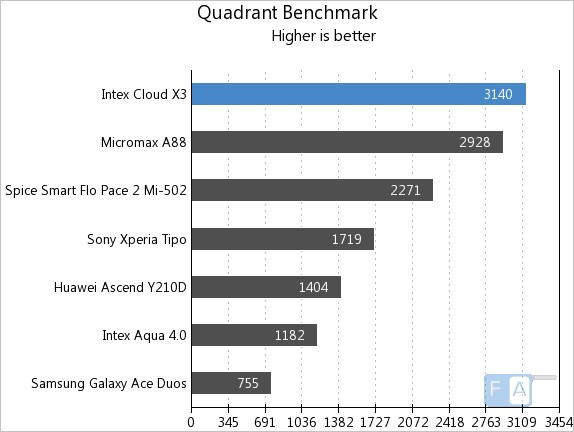 The Cloud X3 tops the Quadrant benchmark when compared with the other dual-core Android smartphones. 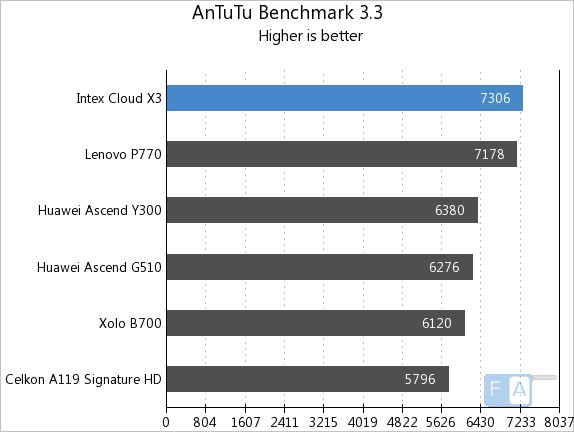 Again the Cloud X3 is the winner in the AnTuTu Benchmark 3.3 by scoring few hundred points more than the Lenovo P770. 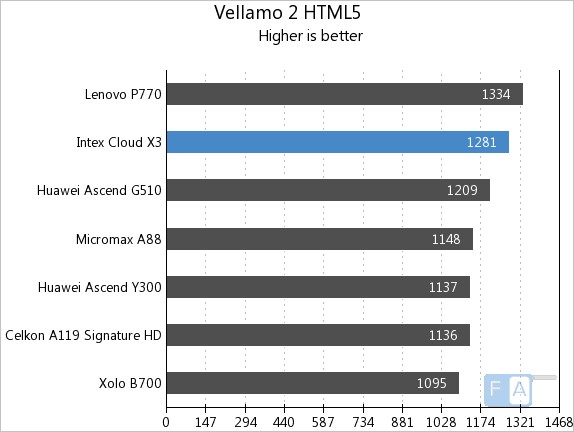 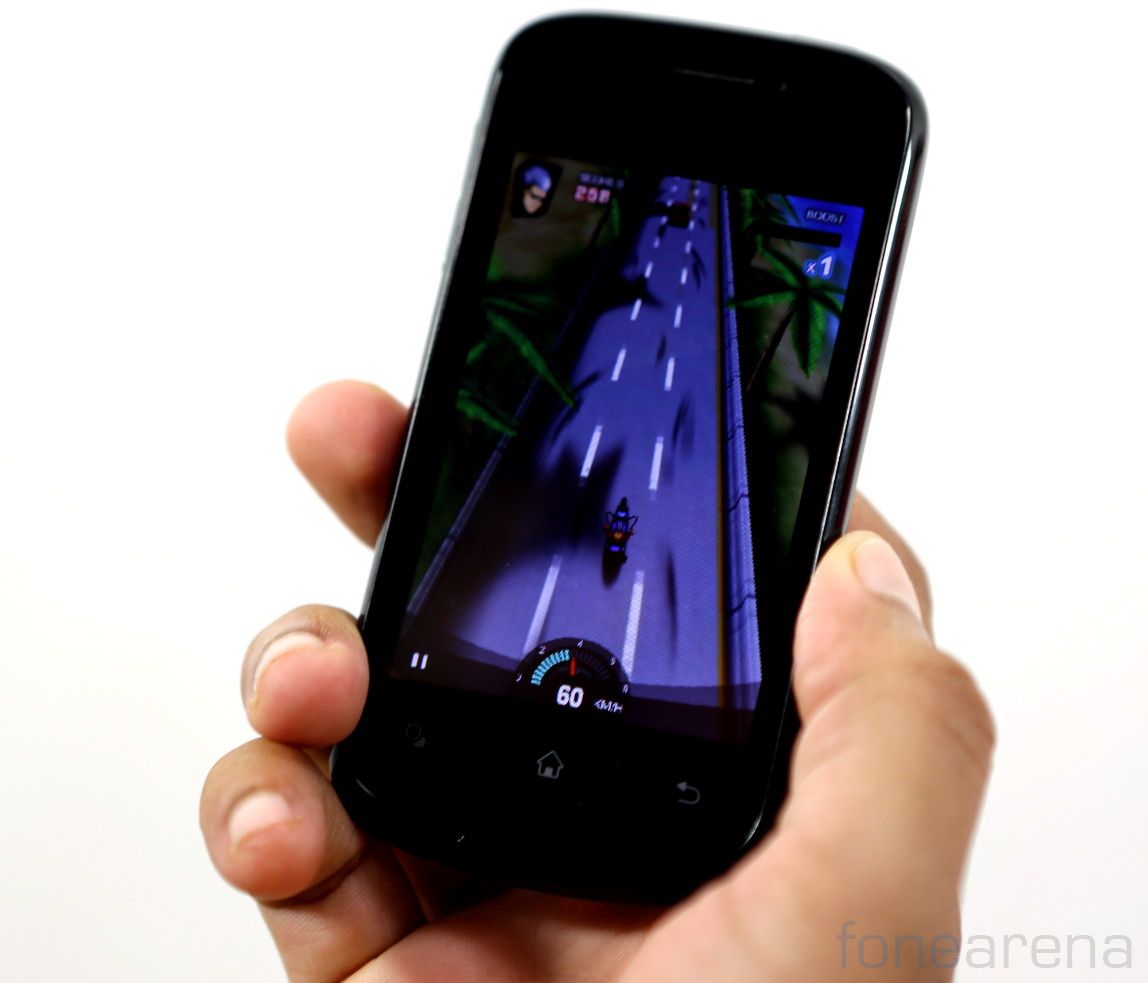 Even though it scores well in the benchmarks, the gaming performance is not impressive. Even some entry-level games such as Racing Moto, Subway Surfers and Temple Run 2 were not smooth, and lagged often. This might be due to less ram. 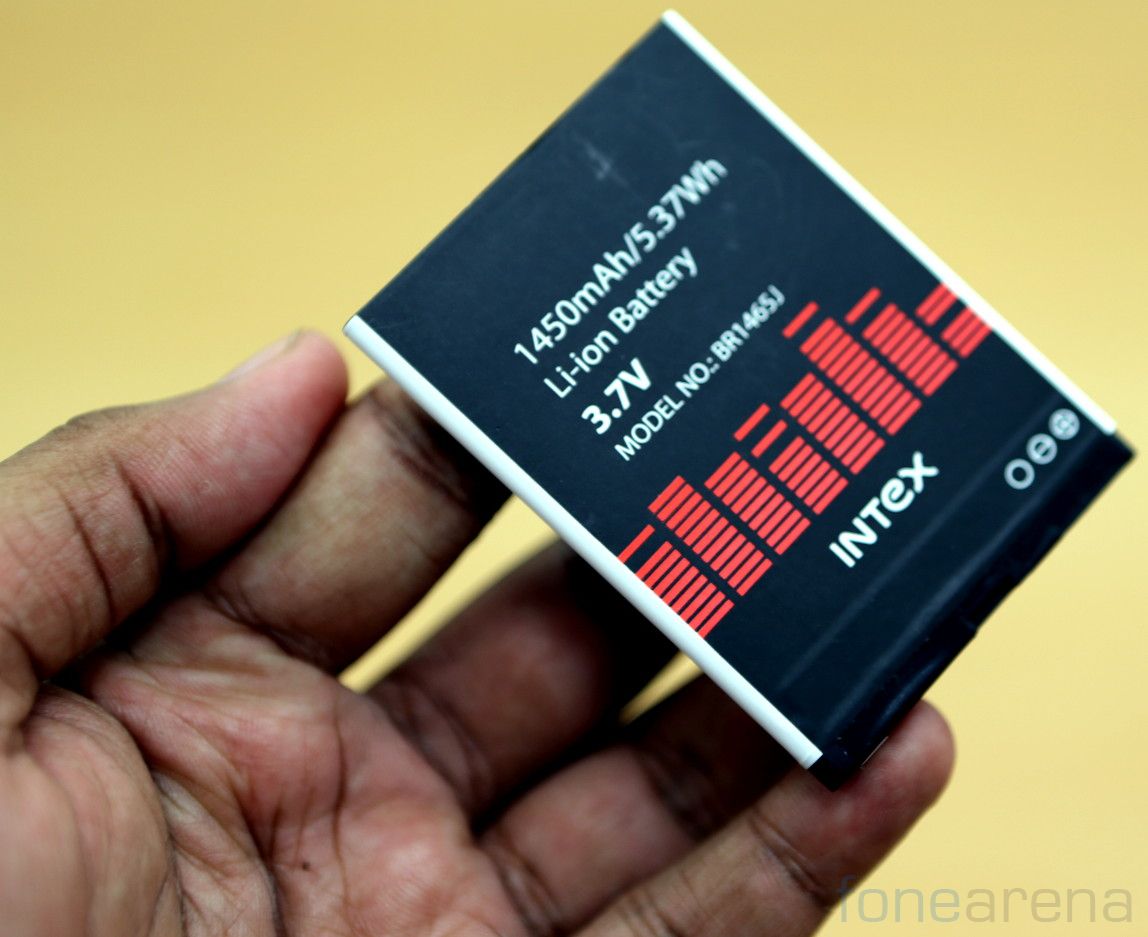 The phone packs a 1450 mAh Lithium Ion battery. Since the phone doesn’t have 3G and has a small display, it last a day easily with average use. With minimal use, it can last about one and half days.

Overall, it a decent device for its price. This is the cheapest phone in India running on Android 4.2 (Jelly Bean). At a price tag of around Rs. 3,800, if you need a smartphone running on Android 4.2 with a front-facing camera, but can compromise on the display, 3G and the camera, go for it. Intex has launched the Cloud X4 recently for Rs. 4,600 which has 3G support and a better camera. Those who can spend more can go for that, if they need 3G.