At an event in New York, LG announced its next generation flagship dubbed the G2. The phone is a fairly significant departure from the design language of the Optimus G. In fact the device comes off as a smartphone inspired by the likes of the Samsung Galaxy S4 and this ideology is not restricted to the hardware of the G2. We’ve had some time with the handset and while not conclusive, here are our thoughts on LG’s latest. 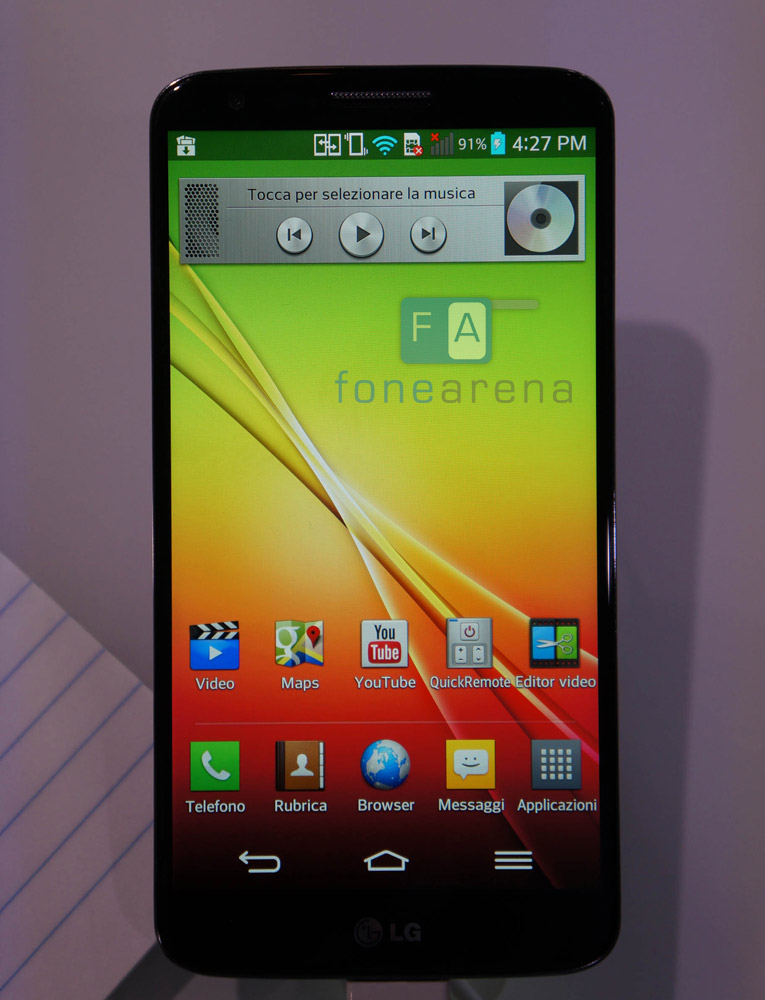 The design has seen a fairly major change compared to the previous generation. It’s light, but not unsettlingly light like the GS4. The front of the device and the way the glass meets the body feels great. The glass slides off at the corners into the body and the ultra slim bezel (0.1 inches on either side) is highly appreciated. LG has figured out a way to connect the touch controller to the capacitive layer from both above and below the display thereby managing to shrink down the bezel. It calls this ‘dual routing’. 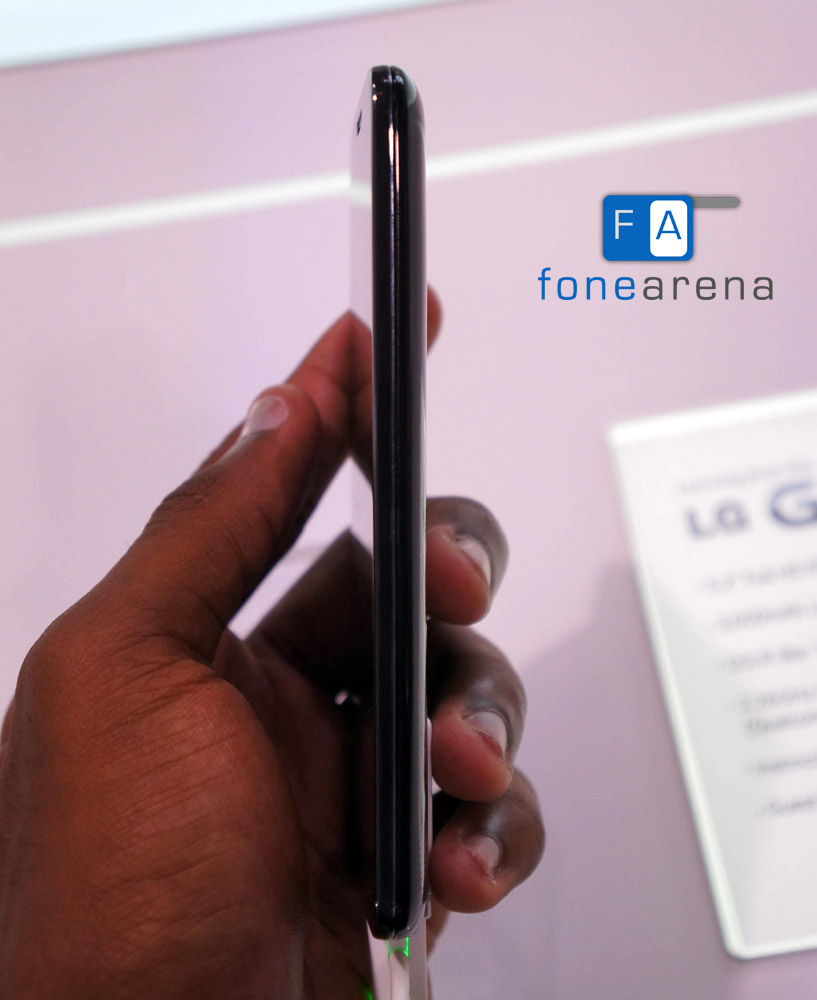 The phone has a very slim 8.9mm profile and felt great in the hand. Given the slim profile as well as the edge to edge display, some users might even find it a bit uncomfortable to hold. As there are no buttons on the front or sides of the phone, you’ll have to use on-screen navigation controls. 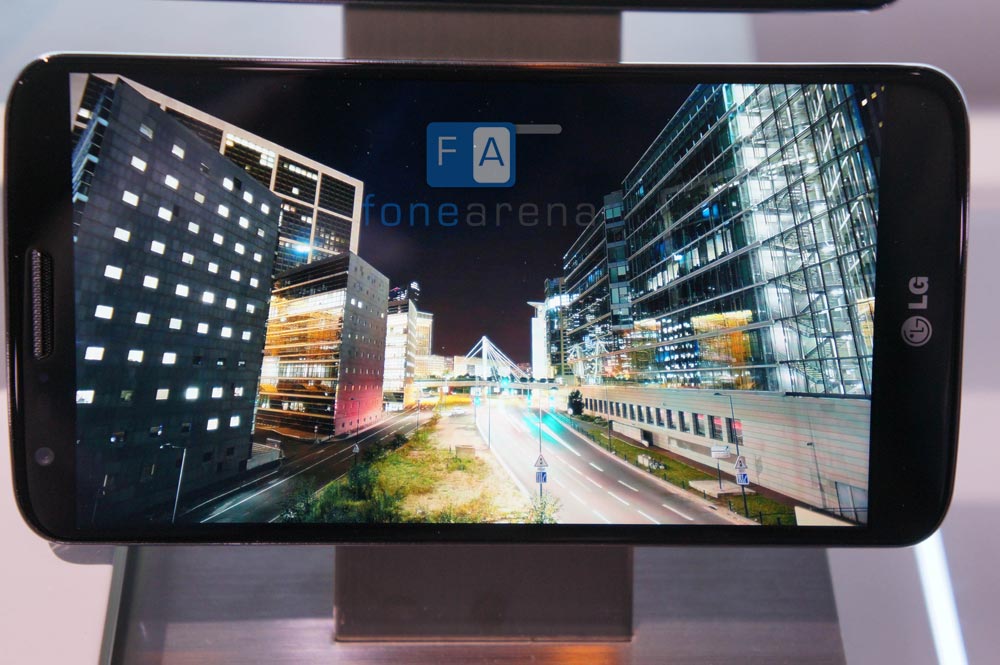 The display on the LG G2 is of the IPS variety. The resolution is 1080p and the screen refresh rate is 60FPS. The display panel uses panel self refresh technology using which LG promises that we should see an appreciable improvement in battery life. While not very visible, the feature is a significant improvement. The G2 has distinct 8MB of GRAM (Graphics RAM) that will be used to show content when a static image is being displayed. Using this the GPU can be dynamically switched off for longer durations which should help improve battery life. In our time with the handset we found the panel itself to be bright and vibrant with excellent viewing angles. Of course, you’ll have to wait for our review of the phone to get the full low down. 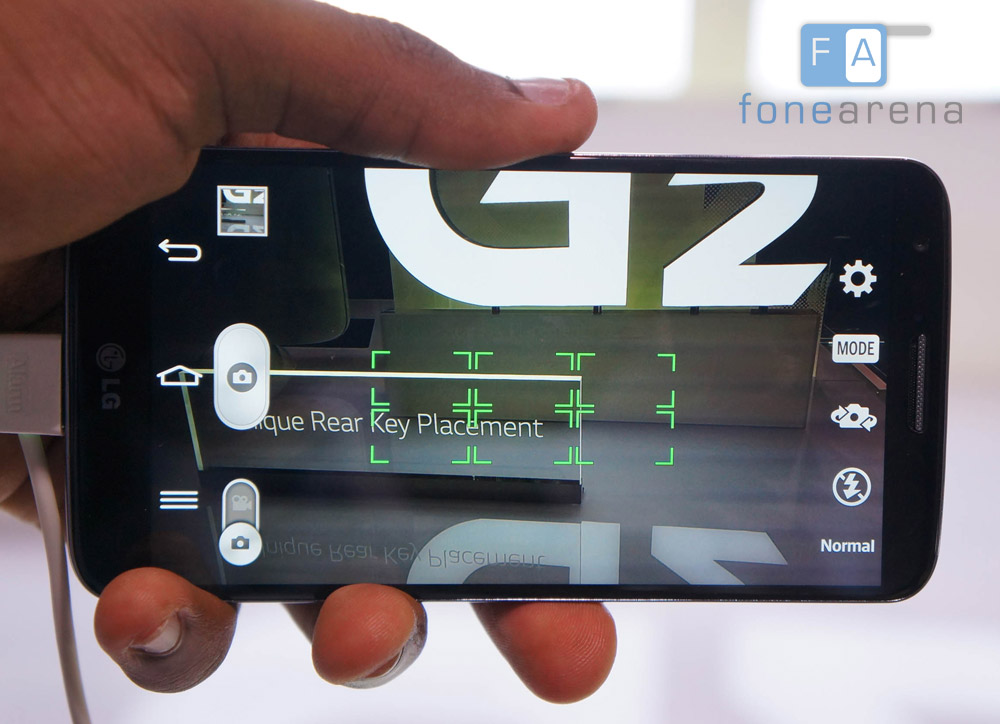 The phone has a 13MP camera unit which comes with built in optical image stabilization. As we’ve seen before on Nokia’s Lumia range of devices, OIS works well to facilitate low light images and can help while taking video too. While we’ll have to wait for a confirmation from LG, we do believe that the G2 is equipped with 2 axis stabilization. You also get an LED flash on the side. Image quality appeared to be quite good in our brief time with the handset but we’ll have to spend more time with the camera on the G2 to form a conclusion. 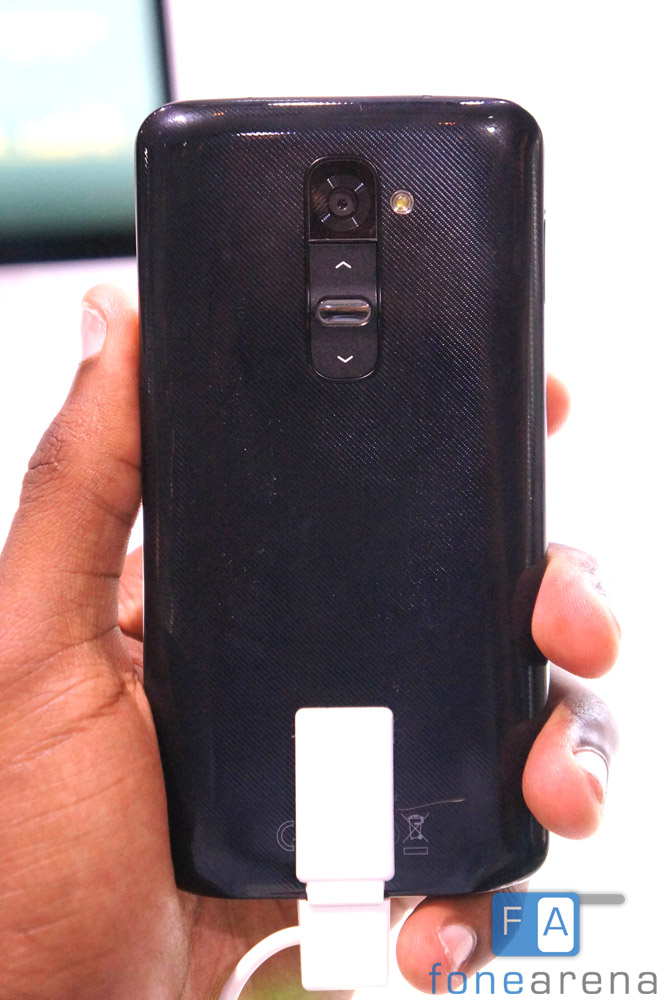 Over at the back lies perhaps the USP of the handset. LG has moved all the buttons front the front and sides of the handset over to the back. Below the camera module lies a volume rocker and power button. The button also acts as a shortcut to trigger the camera shutter and to launch applications. The button placement is such that your handle nestles around the volume rocker and you can just nudge it in place to activate or at least in theory that is how it is supposed to work. In practice, the buttons feel flimsy and don’t seem to be something that a buyer would consider a priority while selecting a device. As a camera shutter, the button works best in portrait mode and you’d be much better off using the onscreen key while shooting in landscape mode. 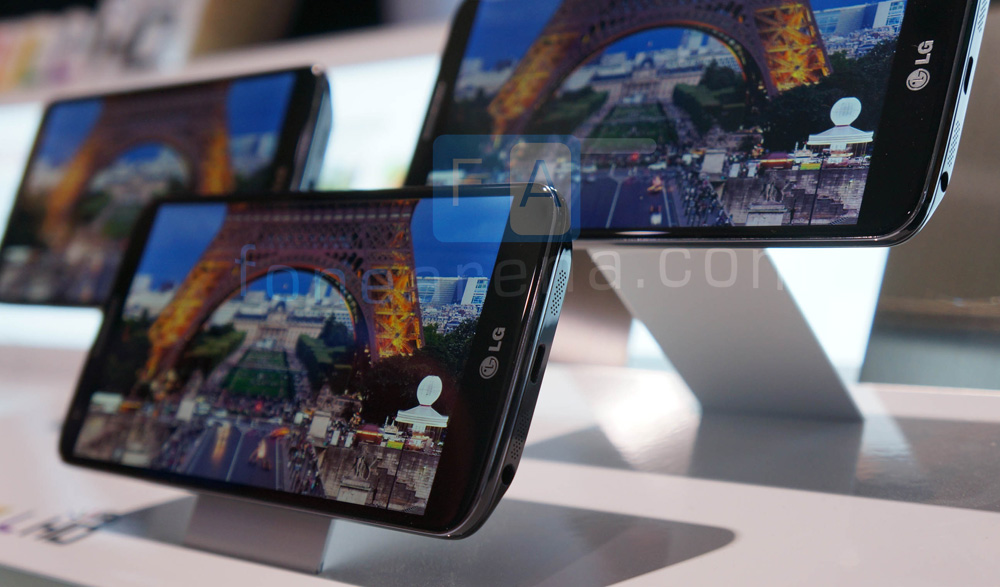 Under the hood is a Snapdragon 800 SoC clocked at 2.26Ghz paired with 2GB of RAM. The processor is equipped with 4 Krait cores. The GPU is the Adreno 330 running at 450Mhz. Storage options are 16GB or 32GB and no, you can’t expand it. Korea on the other hand will get a variant with 32GB of storage as well as a micro SD card slot. We’ve previously done an editorial on the capabilities of the Snapdragon 800 chipset and you should check that out here. Needless to say, the LG G2 is blazing fast. 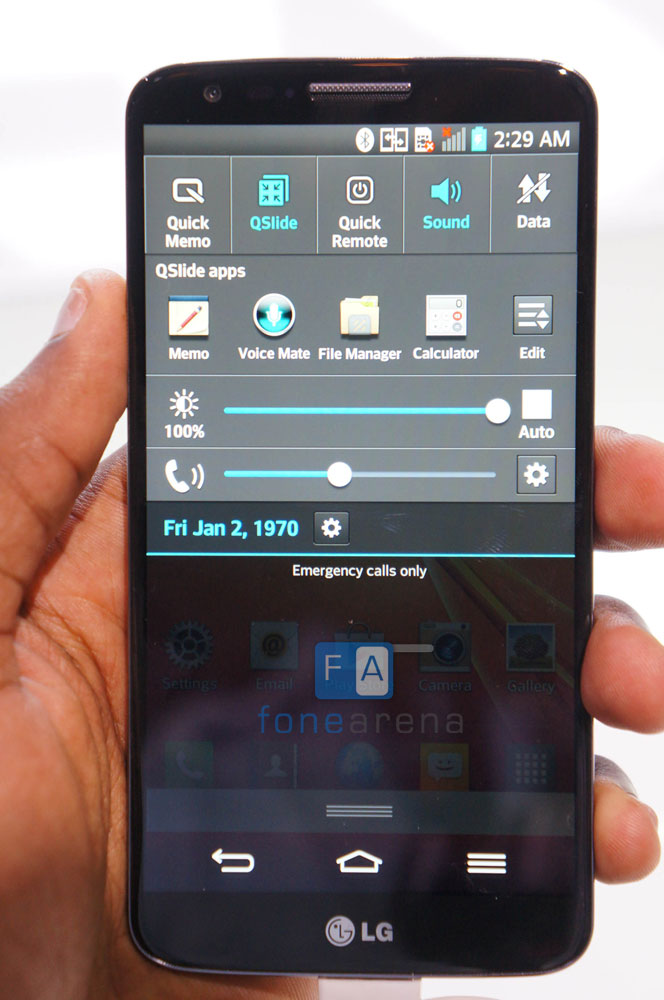 LG has also made quite extensive modifications to Android with their custom skin called Emotion UI. The skin is an evolution of the one already found on its existing devices and we’ve covered this in depth in our LG Optimus G Pro review. A few of the new features that stand out in particular include KnockON, Guest Mode. Considering the unlock key is at the back of the phone, KnockON is a very welcome feature that let’s you unlock the device by tapping the display thrice. Guest Mode as the name suggests let’s you maintain a segregated mode on the device complete with its own password that will let you hand over your phone to a child to play games without giving them access to the rest of the contents.

The LG G2 is a fairly obvious upgrade over its predecessor but doesn’t seem to have anything that particularly stands out. The use of GRAM to improve battery life is interesting but we’re skeptical about how much of an impact it’ll really have in actual usage considering most of us switch off the display when we are not using the phone. Moreover the shift of buttons to the back of the phone seems to have been born out of necessity given the edge to edge display. That said, we do like how the handset feels, could grow comfortable to using the buttons in their new position and there is definitely no doubt that the handset is immensely powerful. With the next generation of smartphones scheduled to be introduced next month at IFA, it remains to be seen if this combination of uninspired looks, quirky design and powerful internals will be enough to interest buyers. The LG G2 will go on sale on all four major US carriers and will roll out globally across 130 carriers over the course of the next eight weeks.

Andre Forbes contributed to this report