Ahead of the LG G2’s launch in New York, a press render has been leaked by the always reliable @evleaks. The first ‘press’ shot of the image confirms what has already been known about this well leaked device. 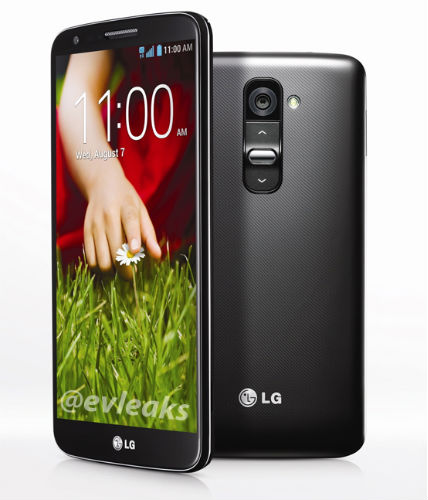 The handset will sport an edge to edge display with a size of 5.2 inches. The resolution like any other respectable flagship will be 1080p. The most striking break from the otherwise traditional design is the volume rocker and power key that resides at the back of the phone under the camera module. The specifications of the handset are right in line with the rest of the upcoming competition and the phone is being powered by Qualcomm’s Snapdragon 800 chipset clocked at 2.3Ghz with an Adreno 330 GPU and 2GB of RAM. The rear camera is a 13MP unit while the front is rated at 2.1MP. The phone will sport a nano SIM card slot first seen on the iPhone 5 and more recently on the Moto X. We’ll have on the ground coverage from the launch event so don’t forget to check back to see hands on images of the handset right here on FoneArena.