Huawei was the first company to step into the 6inch + phablet category with Ascend Mate. The Huawei Ascend Mate was announced way back in January during the CES 2013, but the phablet has been available in India only since June. Samsung’s biggest phablet until the Mega series arrived was their Galaxy Note 2 with a 5.5inch display that we compared with the Ascend Mate recently. To expand the phablet portfolio and to compete in the larger phablet race, Samsung launched two new phablets – Mega 5.8 and Mega 6.3 . 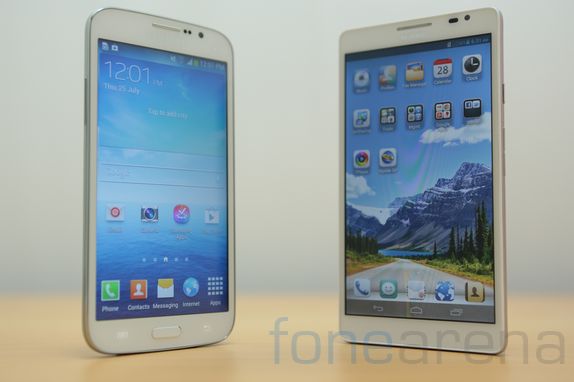 Let’s check out how the Galaxy Mega 5.8 fares against the Huawei Ascend Mate.

In terms of design, the Samsung Galaxy Mega 5.8 looks like any other Galaxy device and it is becoming increasingly difficult to distinguish Samsung Galaxy phones these days. The Galaxy Mega 5.8 follows the design language of the company’s flagship – S4 with a textured pattern all over the device and an all plastic build. The plastic rim that runs across the device is also quite similar. The Huawei Ascend Mate on the other hand takes a slightly different approach with a more conventional rectangular build with very small rounded corners. The Huawei Ascend Mate has a piece of metal running around the device and this has increased the weight of the device to around 200 grams and makes it slippery. 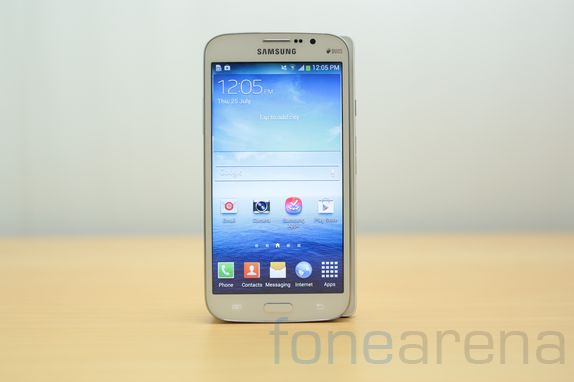 The Galaxy Mega 5.8 is smaller than the Ascend Mate in terms of height, width, thickness and weight. On the front, above the display, the ambient and proximity sensors are located, next to the earpiece. Then we have the front facing camera next to these sensors. On the Mega 5.8, there is no LED notification light, but on the Huawei Ascend Mate, we find that it is next to the earpiece. 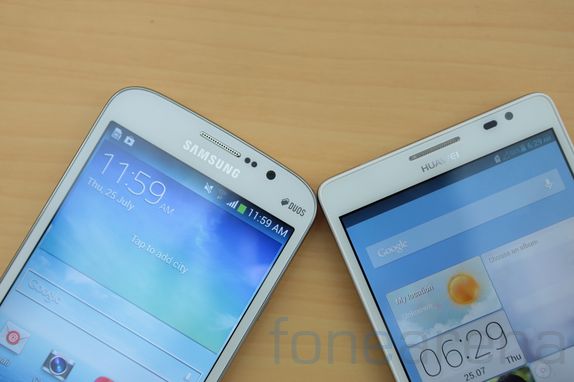 Below the display, we have the home key at the center flanked by the back and settings capacitive keys on the Galaxy Mega. There are no capacitive touch buttons on the Ascend Mate. 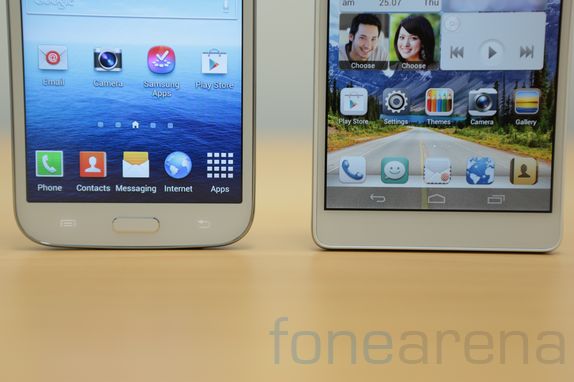 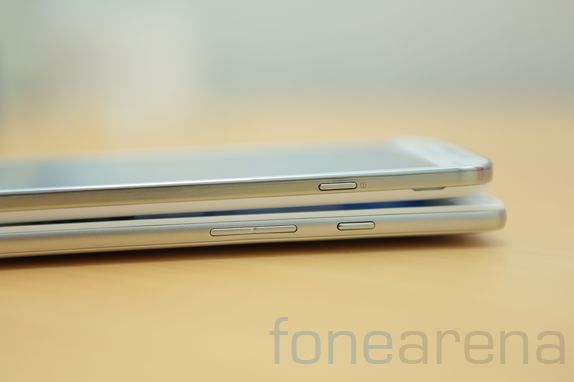 The bottom of both of the devices is quite same with the micro USB slot at the center and the microphone right next to it. 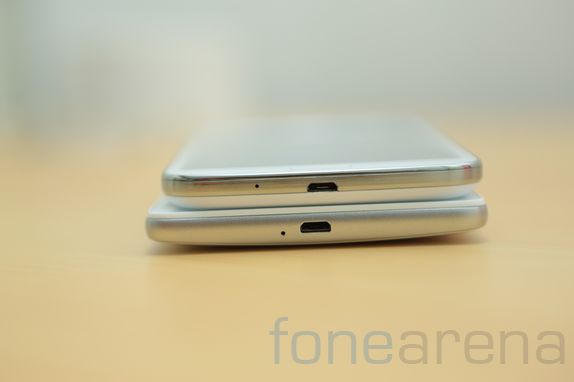 On the left side, the Galaxy Mega 5.8 has the volume rocker, while the Huawei Ascend Mate has a microSD card slot covered by a flap. 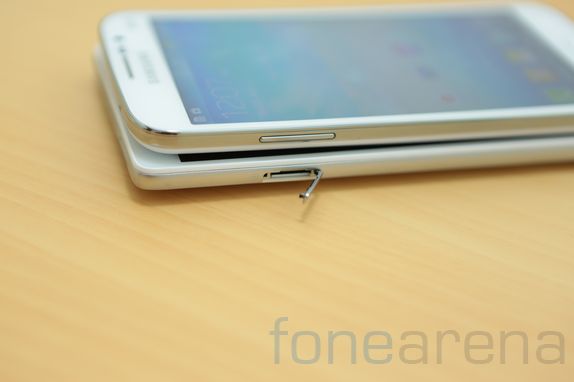 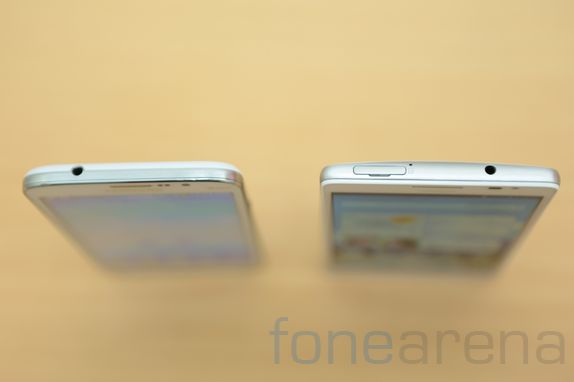 On the back side of the devices, we have a 8MP camera which is located at the top center and an LED flash is found on the left side of the camera. On the Galaxy Mega 5.8, we have the speaker grill right next to the camera, while the speaker grill is at the bottom right on the Huawei Ascend Mate. The Galaxy Mega has a glossy back while the nature of the back cover depends on the color in Huawei Ascend Mate (Black has matte finish while white has a glossy finish). The back cover is removable in the Galaxy Mega 5.8 and we can see the 2600mAh battery along with the two microSIM card slots, one on top and other on the bottom, below the battery. Both the slots are not hotswappable. On the right side here, we have the hot-swappable microSD card slot. 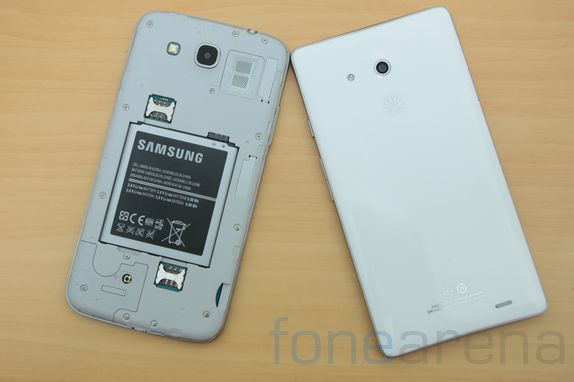 Both the devices are dominated by plastic body and as a result are quite glossy and tend to be fingerprint magnets. The Galaxy Mega 5.8 is slightly smaller in all dimensions and handling the Mega 5.8 is easier than holding on to the Ascend Mate. The Ascend Mate is slippery because of the metal rim running across the device and accessing the buttons on the right side can be difficult at times. In terms of design, the Ascend Mate feels better because of better screen to display ratio and a more solid and sturdy build. However, Galaxy Mega proved that, despite its old and boring design, handling it was considerably easy. 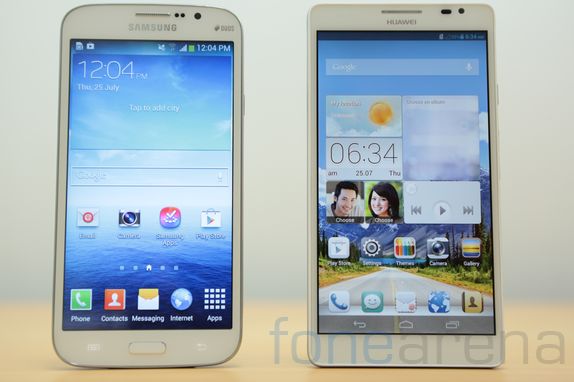 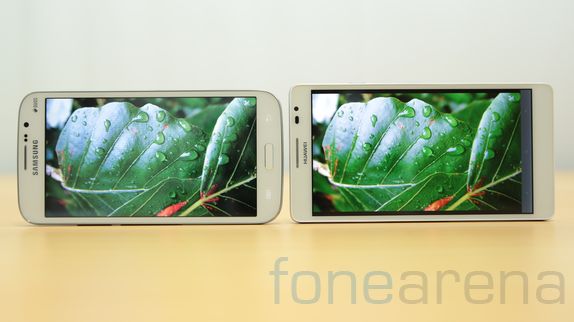 Overall, the display of the Ascend Mate is better because of its high pixel density, true colors and contrast.

The Samsung Galaxy Mega is powered by a 1.4GHz dual-core Broadcom BCM28155 processor and has Broadcom’s Videocore IV GPU. There is 1.5GB RAM on board. The Huawei Ascend Mate on the other hand is powered by a home-brewed Huawei K3V2 SoC with a quad-core processor clocked at 1.5GHz. There is 2GB of RAM and it is said to have a 16-core Vivante GC4000 GPU. 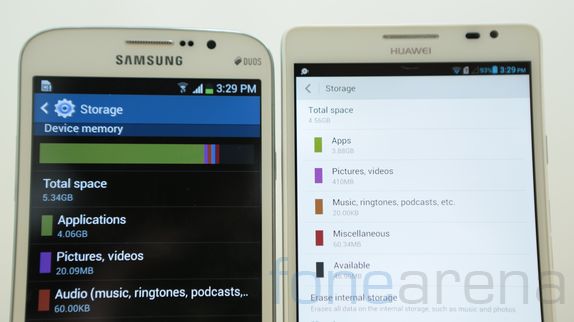 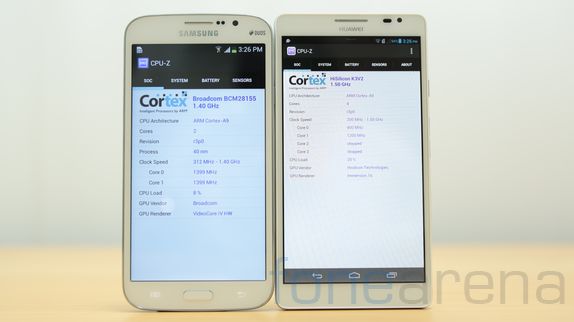 Both the devices have a 8 MP camera and record 1080p videos at 30fps. The Galaxy Mega comes with a 1.9MP front camera while Ascend Mate has a 1MP front facing camera. 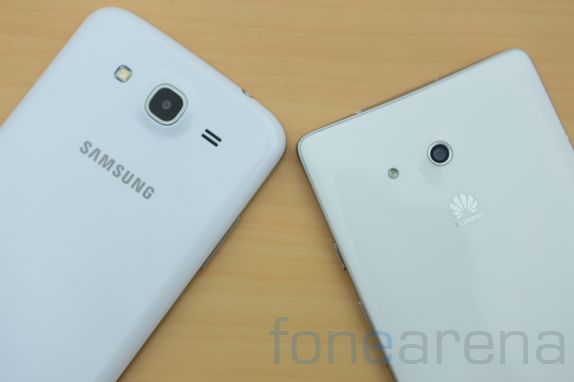 The camera UI is quite different and Samsung has various shooting modes like Best Shot, Sound and Shot and many more. However, we found that many other modes which were found in the Galaxy Mega 6.3 and other Galaxy devices was missing in the Galaxy Mega 5.8.

You can check out the camera comparison video below to get a clear view.

The Galaxy Mega runs on Android 4.2.2 overlaid by Samsung’s TouchWiz UI. The Ascend Mate runs on Android 4.1.2 overlaid by their own Emotion UI. You get many features like Multi-Window which lets you do two things at a time, the smart stay feature, which keeps the phone screen on as long as you are looking at the display. You also get the pop-up video which you must be quite familiar with. The Ascend Mate does not have such features and hence the Galaxy Mega has the advantage when it comes to software.

Gaming on both the devices is average. The games are relatively smooth on the Galaxy Mega mainly because of Samsung’s optimization. The Ascend Mate, being powered by an unknown GPU has poor support for gaming and even the simplest of games like Temple Run 2 fails to run properly at maximum settings. The Galaxy Mega isn’t a perfect device for gaming either, apart from Asphalt 7, other games had their fair share of issues like occasional glitches and low details throughout the entire game.

Huawei’s Ascend Mate comes with a gigantic battery of 4050mAh which puts the Galaxy Mega’s 2600mAh battery to shame. The bigger battery gives the mate a clear advantage in lasting longer. However, the Ascend Mate’s battery is not user accessible.

In terms of connectivity, both the devices come with the usual set of connectivity options like WiFi, 3G, Bluetooth and microUSB. The Galaxy Mega comes with dual SIM support which is not there in Huawei Ascend Mate. 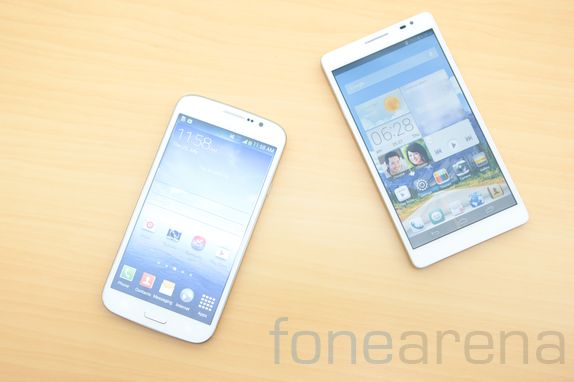