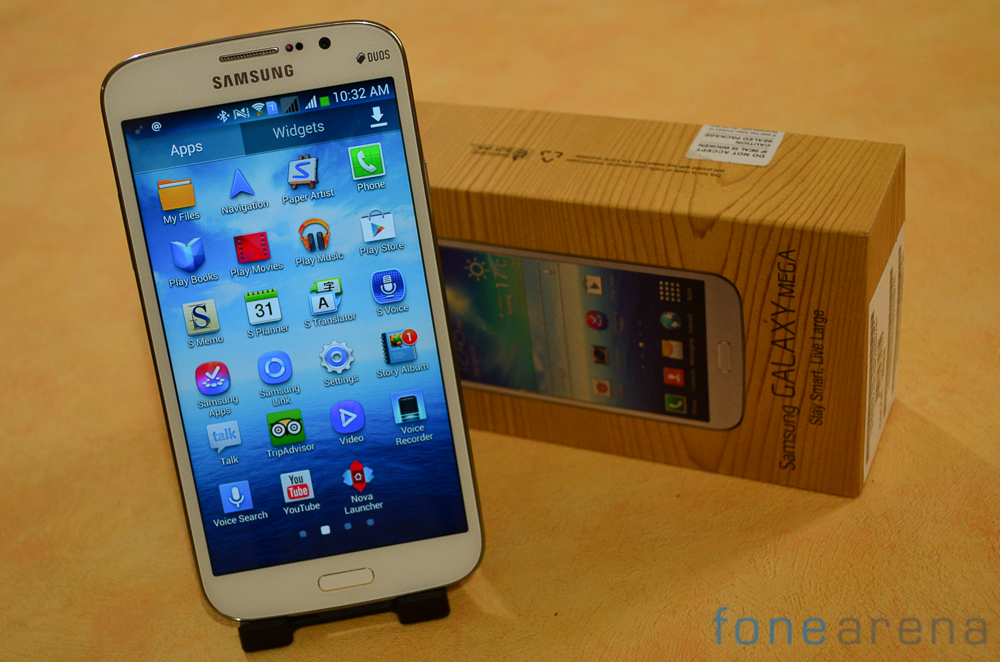 The Samsung Galaxy Mega 5.8 is a part of Samsung’s two pronged approach to capture the audience looking for a device even bigger than the 5.5inch Note 2 but smaller than a tablet. Targeting the 5.8 inch and 6.3 inch segments, Samsung now has handsets at practically every screen size. The Galaxy Mega 5.8 incorporates a large screen with dual SIM capabilities to offer an interesting proposition. Is it worth taking a look at ? Read on to find out.

The Samsung Galaxy Mega 5.8 is a play on the design of the Galaxy S4 which in itself isn’t exactly a very fresh design. Samsung has a habit of marginally tweaking the design and that’s what you get here with the slimmer bezel and slightly more angular design. The phone is just about 9.9 mm thick. 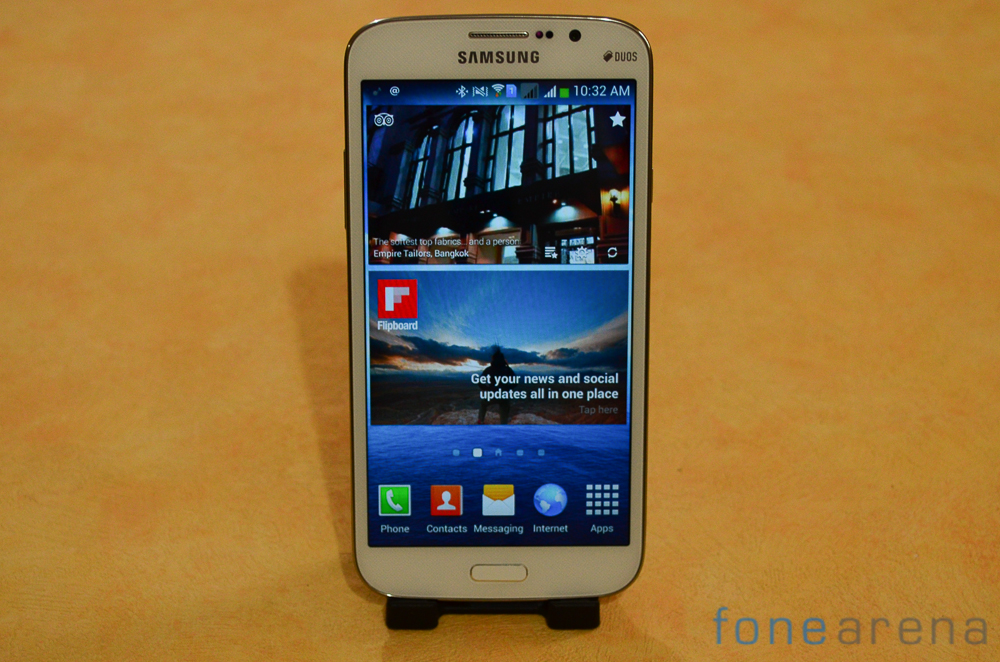 The front of the phone is basically a massive screen that at 5.8 inches really is approaching tablet territories. Bezels are refreshingly thin and you get a speaker grille, 1.9MP front facing camera and proximity sensor above it. Below the display is a hardware home key that is flanked with a menu and back button on both sides. 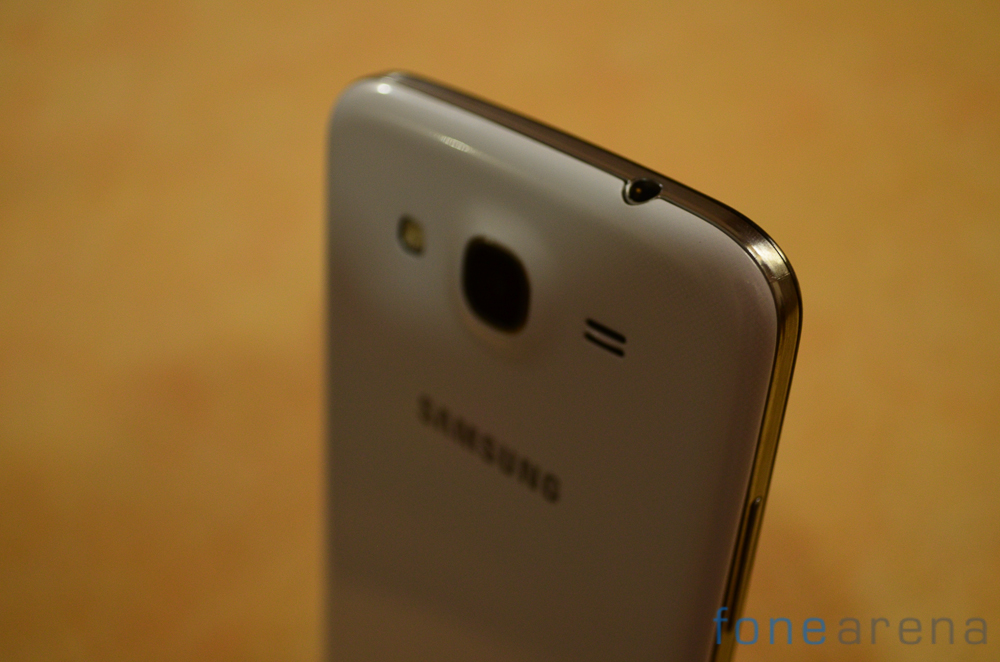 The right side of the phone has the power key that is placed at a very easy to reach location. On the left is the single button volume rocker. The microUSB and audio jack lie at the bottom and upper rim of the handset respectively. While there is no camera button, it is possible to set the volume rocker as a zoom key as well as a shutter button. 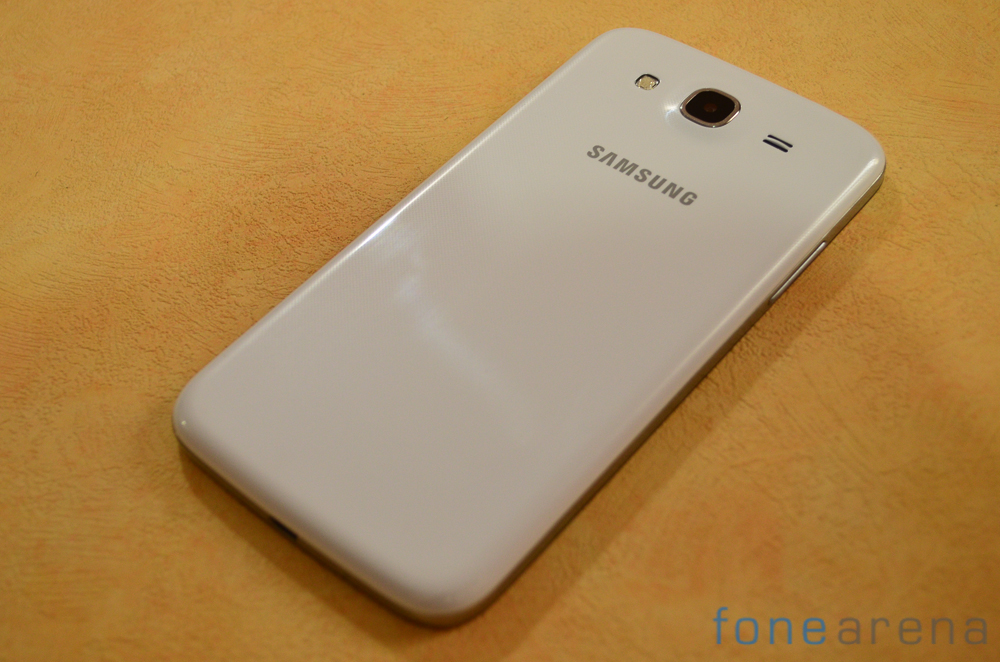 Moving to the back of the phone you get a glossy white plastic shell. The back cover has a light texture in it and a bulge on top with the camera module in it. To the left and right of the camera you’ll find the LED flash and speaker grille respectively. Under the cover you’ll find the battery, two microSIM card slots and a microSD card slot. 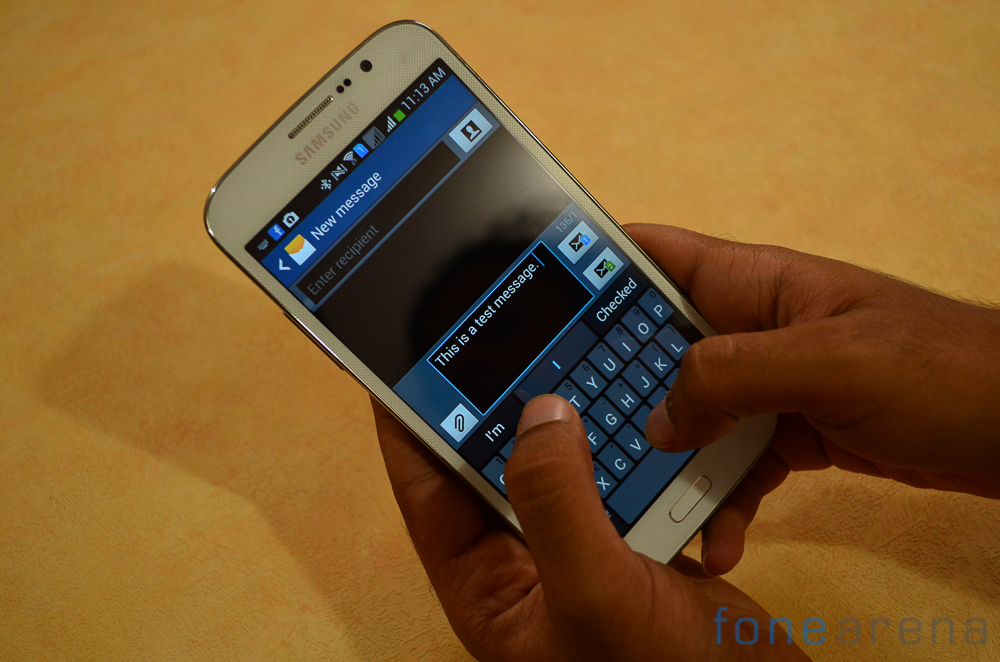 Given the size of the handset, it can be a stretch for people with small – medium size hands to grab the phone and use it simultaneously. The slippery back and slim bezel mean that in most situations we ended up using both our hands for any kind of use and especially for text input. The handset isn’t too uncomfortable in the hand and this is something that we can’t say for it’s bigger brother, the Mega 6.3. Even in the pocket, it doesn’t bulge out but you’ll definitely want to take it out when sitting down. Samsung does have a few software settings that help with one handed use but the scope of those software changes isn’t much. More on that in the software section.

The 5.8″ screen is the highlight of the handset. It is a TFT LCD panel and has a resolution of 960 x 540 i.e. qHD. This resolution spread over the 5 inch panel results in a fairly low pixel density of 190ppi. The screen quality isn’t bad at all but the resolution drop is very noticeable because of the reduced sharpness. 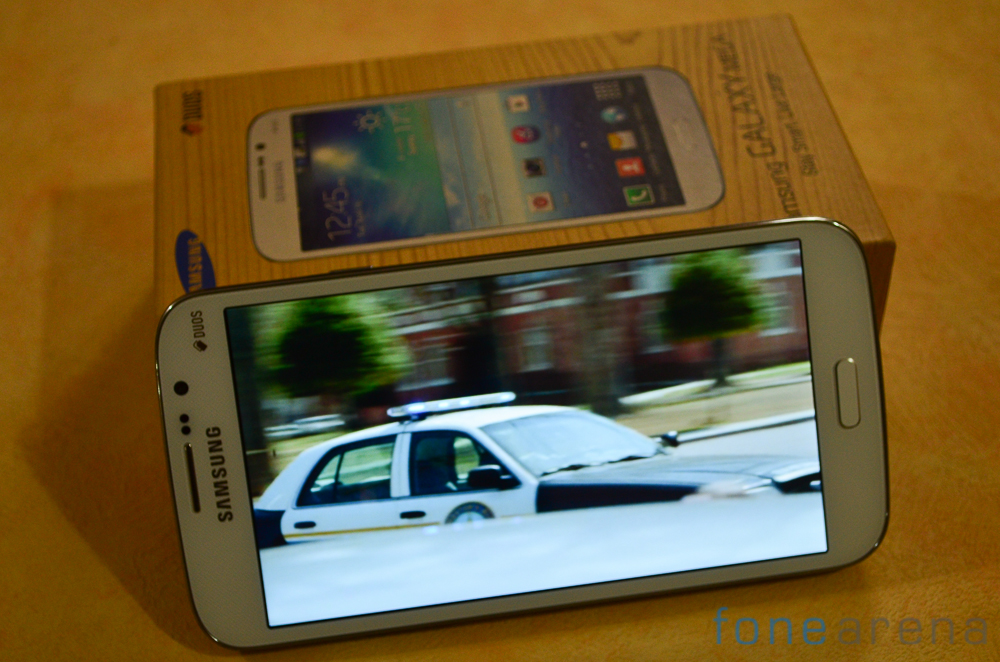 Text and graphic elements look slightly blurred out at the edges.   Despite the large screen real estate, the phone doesn’t really fit in more interface elements. Viewing angles are good and so is sunlight visibility. Contrast levels are decent and brightness controls can be tweaked exactly to your liking thanks to the slider built into the notification hub.

The Samsung Mega 5.8 runs Android 4.2.2. There phone also has the new version of TouchWiz that debuted on the Galaxy S4 but misses out on some features. 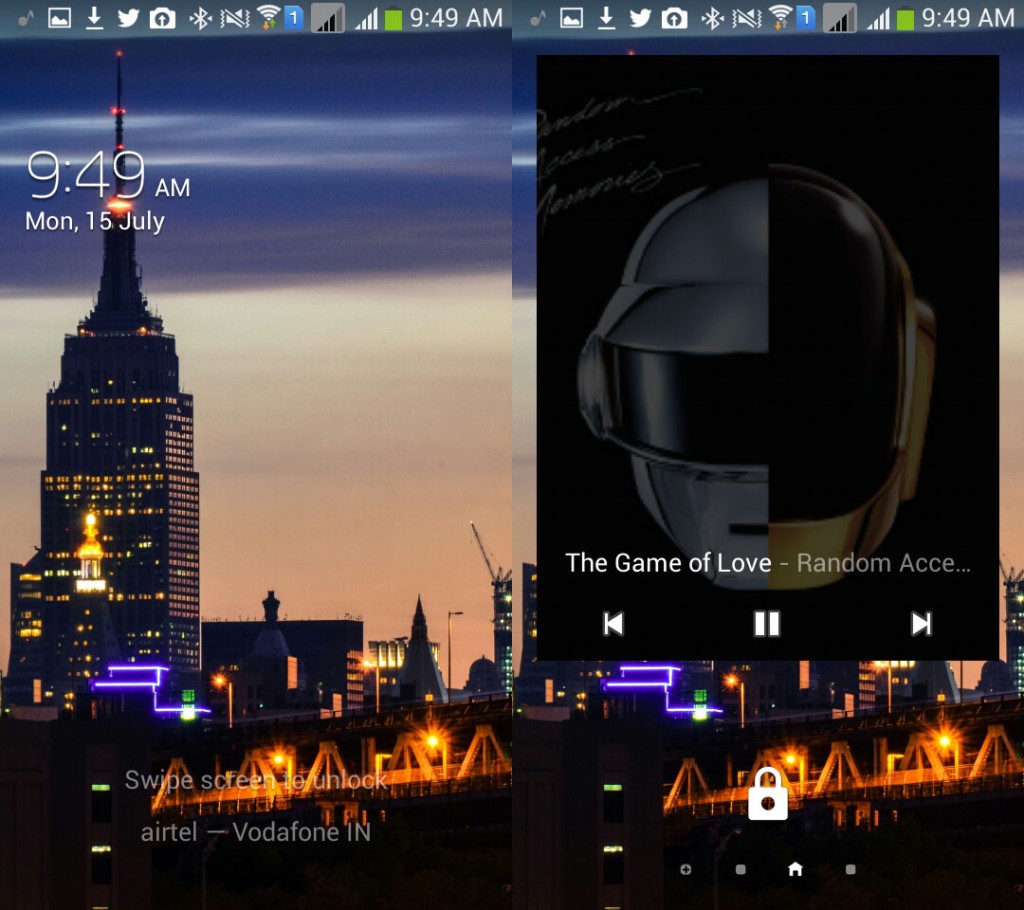 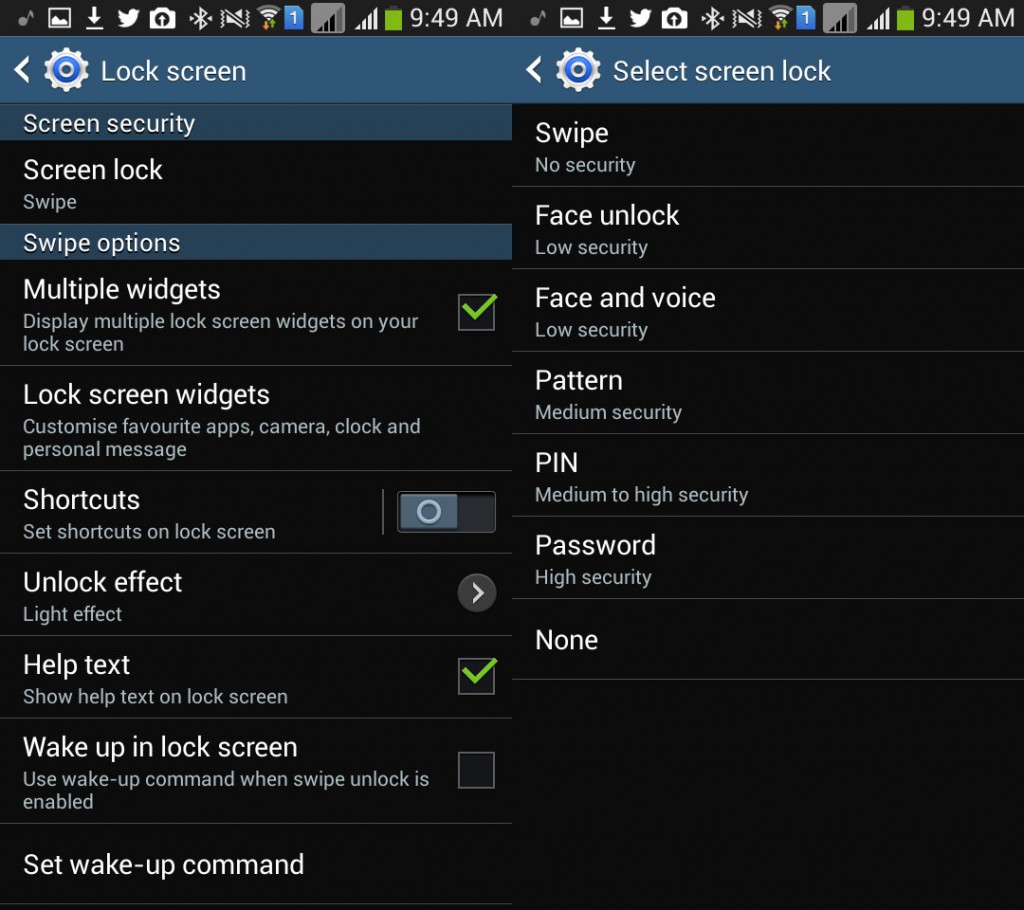 You can switch the unlock effect from the settings and this can be set to ripple, lens flare or none. Each lock screen pane houses one widget with the one on the right defaulting to a list of favorite applications. The left side includes a range of widgets like Gmail,  Music Player etc and while there are no app shortcuts by default, it is possible to enable them on the lock screen. 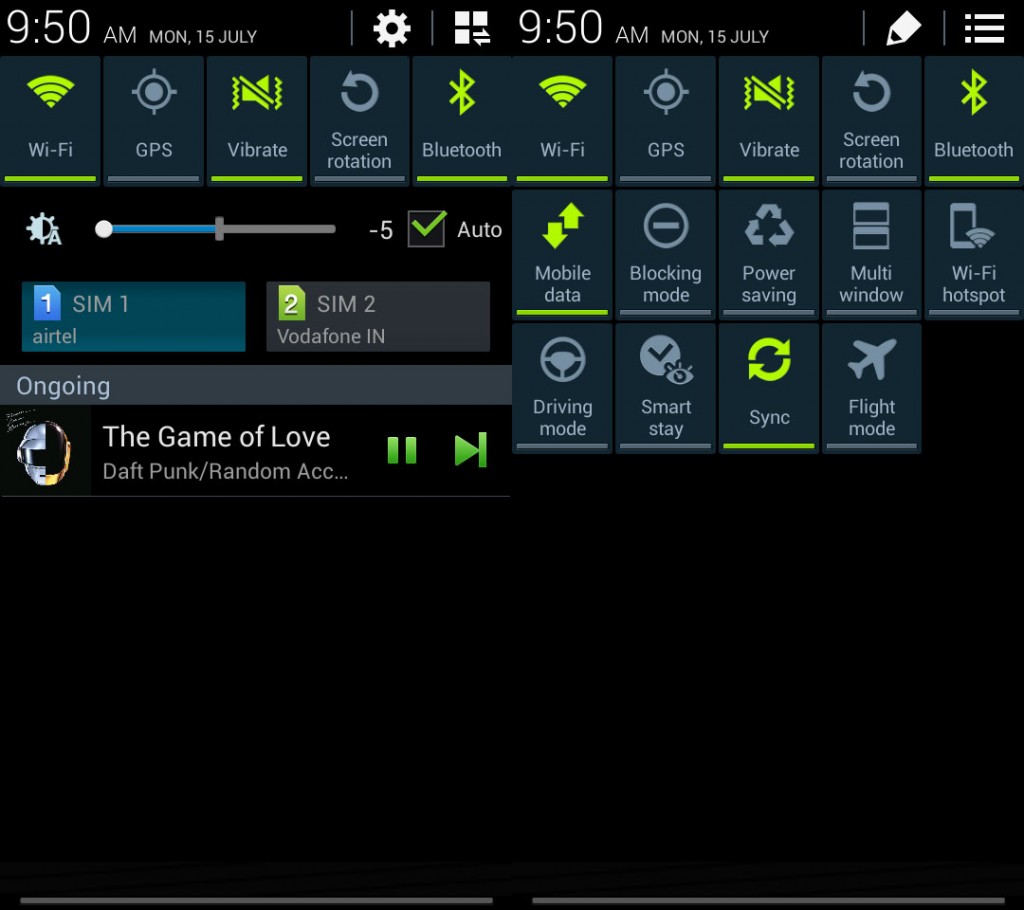 Moving on to the notification hub. you can spot five key toggles that include WiFi, GPS, Profile, Screen Rotation and Bluetooth settings. You can swipe across to access more or tap the corner button to see all 14 toggles in a single glance. The phone is all about customization as we saw in the lock screen area and even here it is possible to rearrange this grid and even remove certain additional settings. Long pressing a toggle opens its settings page. 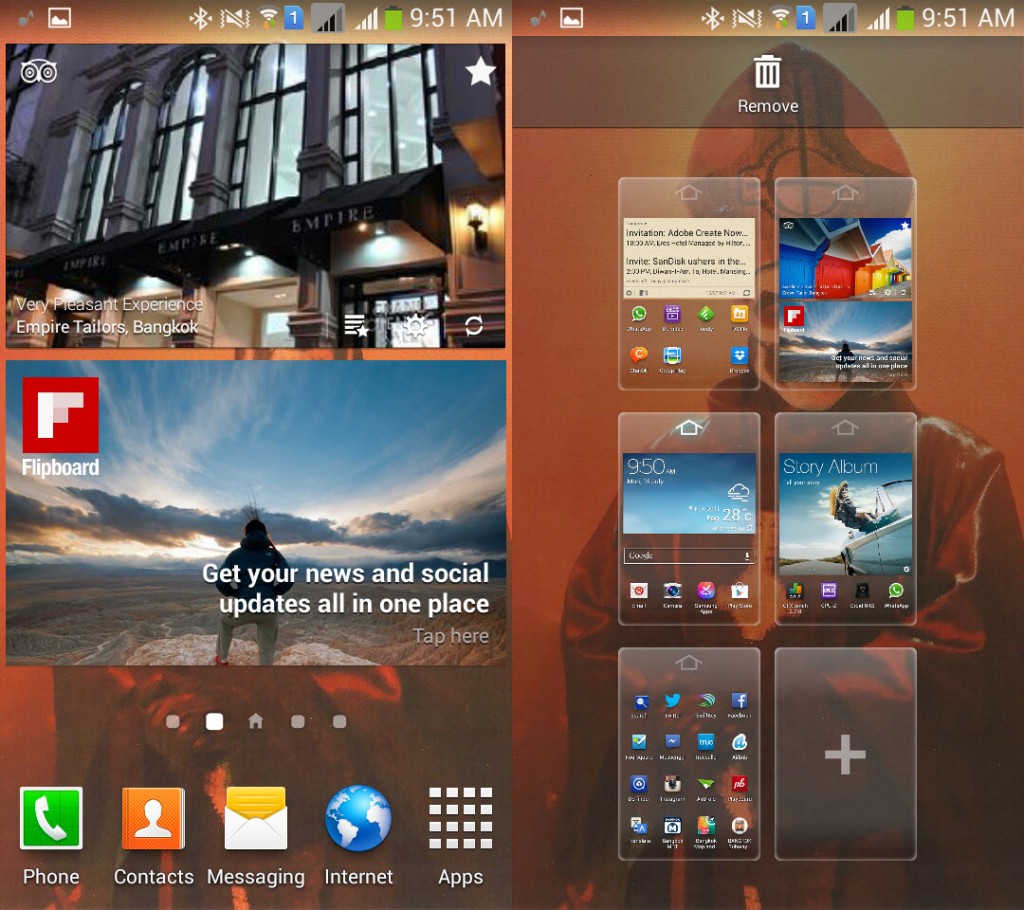 The home screen is essentially just a collection of icons with some Samsung specific widgets thrown in for good measure. This includes Samsung Hub, S Travel, S Memo and even direct access widgets for stuff like the Dual SIM settings. A wrap around feature can also be enabled to let you keep scrolling through home screen panels without hitting the 7 pane limit. 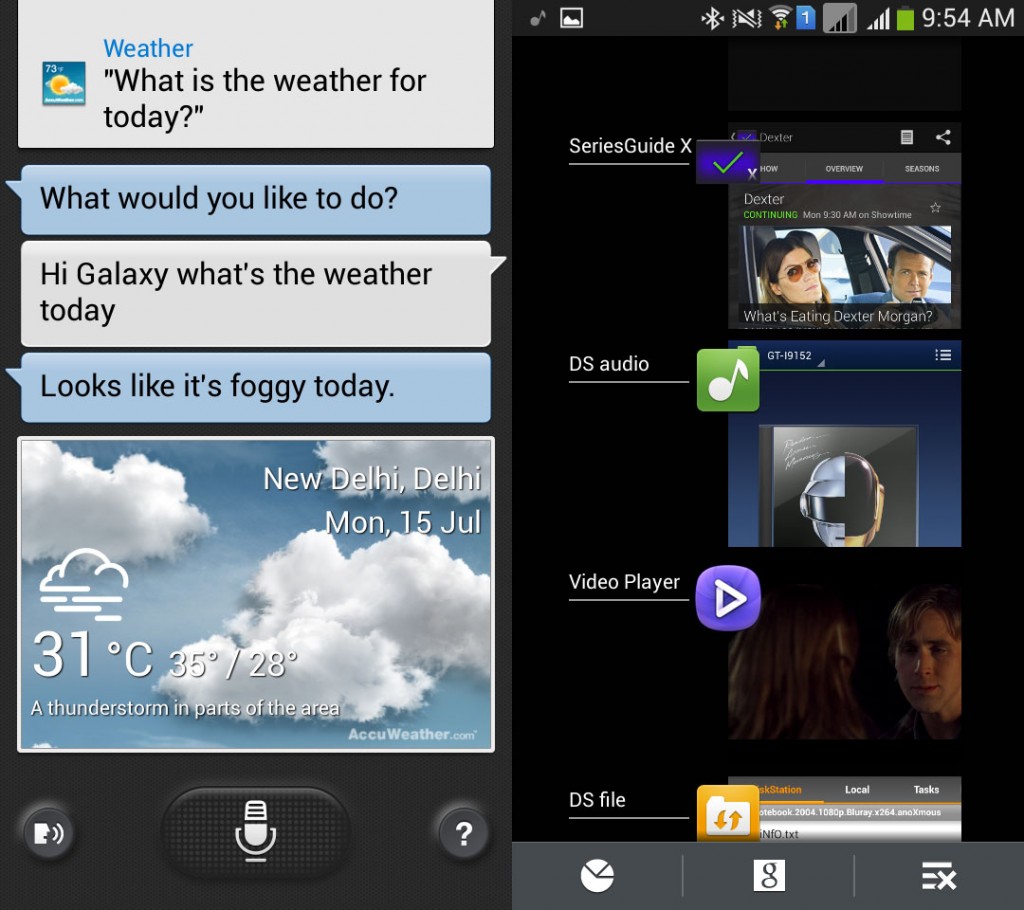 Samsung has also configured the hardware keys to correspond to certain software based actions that should help increase productivity. The home key can be used to launch S Voice which is Samsung’s version of Siri. A press and hold initiates the task switcher while long pressing the menu button activates Google Now. A long press of the back button triggers the Multi Window setting. 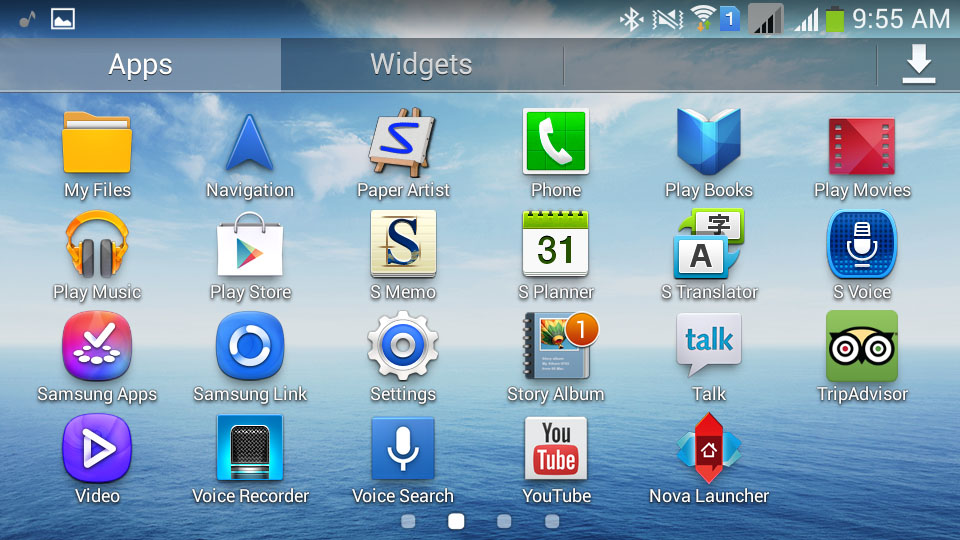 Under the app drawer there are not many changes over the previous versions of TouchWiz you might’ve seen. The app shortcuts are placed in a grid and it is possible to sort this in a custom or alphabetical order. The app switcher is very similar to the default Android app switcher but places shortcuts to the task manager, Google Now and an option to kill all apps.

The Samsung Galaxy Mega 5.8 is powered by a 1.4 Ghz Dual Core Broadcom processor and has a VideoCore IV GPU. This chipset is not very popular amongst mid to upper range handsets so it is interesting to see it here on the Mega 5.8. Day to day performance was satisfactory but the slow application start up was generally noticeable. Browsing performance too was good but not great. In particular the handset would slow down for a few seconds while switching from or to a call while working on an application. If you’re interested in synthetic benchmarks, we’ve got you covered. You can check out the complete benchmarks here but some of the more important ones are embedded below. 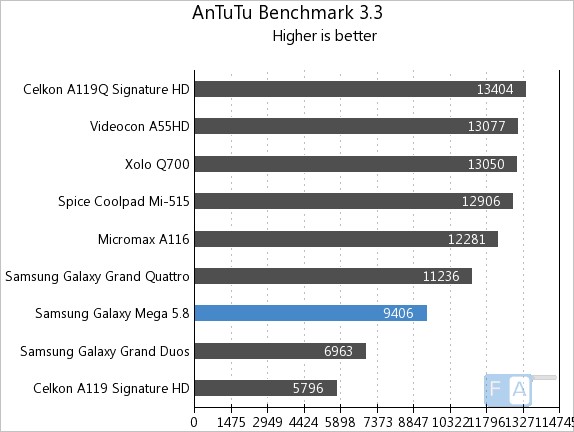 In the AnTuTu benchmark, the phone scores just 9406 which places it in the lower end of mid range devices. The competition really pulls ahead here. 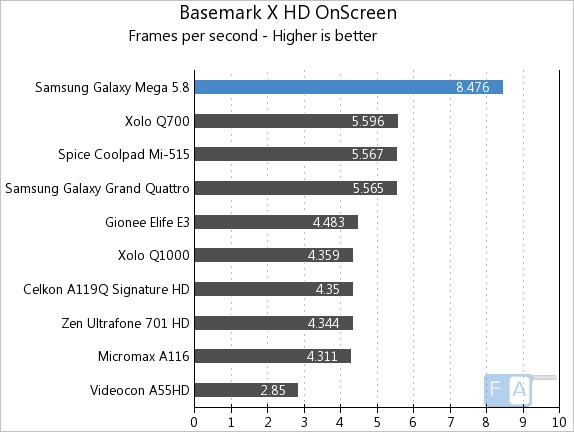 In the Basemark X benchmark, the phone manages to score 8476 which proves to be favorable. That said the performance of the handset is strictly mid range. We wish that Samsung had opted for a Qualcomm processor here as well like on the Galaxy Mega 6.3.

We tried Dead Trigger and Asphalt 7 on the device. Here are the game play videos

Here is the gaming performance review

The Galaxy Mega 5.8 sports an 8MP camera capable of capturing Full HD video while the front facing camera is rated for 1.9MP. There is no dual shot function here probably due to the choice of processor. The camera interface is the same as previously seen on the Galaxy Camera.   A button on the top left corner toggles a range of features including the LED flash and self timer. Exposure can also be set from here.   A mode button on the bottom right corner lets the user swipe through several preconfigured modes including panorama shot, best face that prioritizes focus on the face and sound & shot that captures a few seconds of audio alongside the photograph. 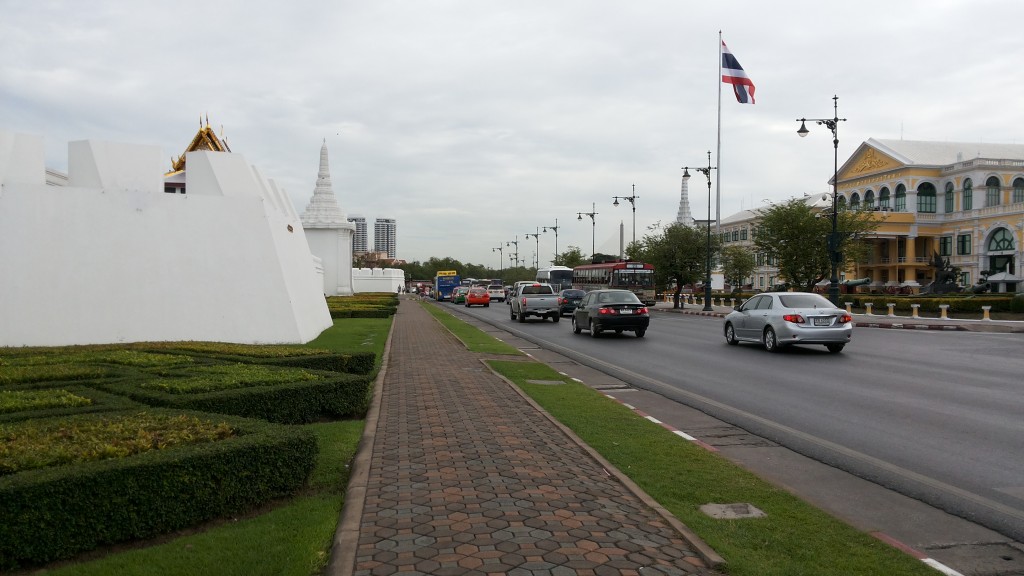 Photos are quite detailed as long as the lighting is good and noise levels are kept under control. We found contrast to be low but that is something that can be tweaked. 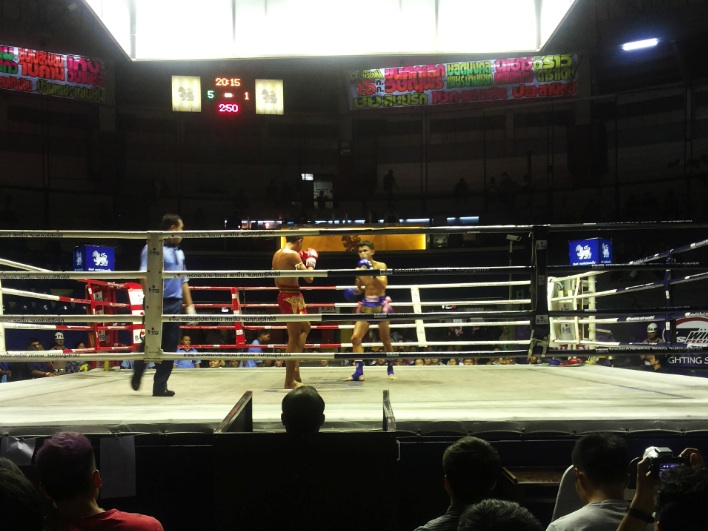 Even in low light, the phone manages to keep noise levels under control but the level of detail predictably suffers. Overblown highlights due to the limited dynamic range of the camera were also an issue. 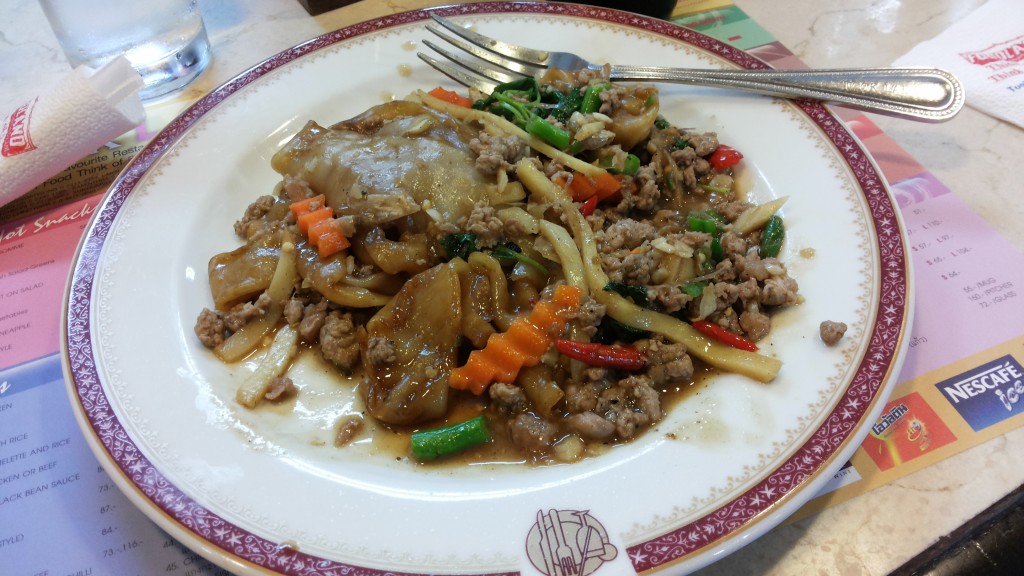 We were quite impressed by the close up photos taken with the Mega 5.8. The camera is particularly quick to get a focus lock.  It is far from the best 8MP shooter out there but image quality is more tha usable.

The Samsung Galaxy Mega 5.8 is a dual SIM handset and supports 3G connectivity on both SIM cards but only one of these can have 3G switched on at a time. The phone also supports WiFi a/b/g/n as well as Bluetooth 4.0. The battery unit is rated at 2,600 mAh and proves to be sufficient given the low resolution of the display and efficient processor. We could easily get a full day of extensive usage from the phone. 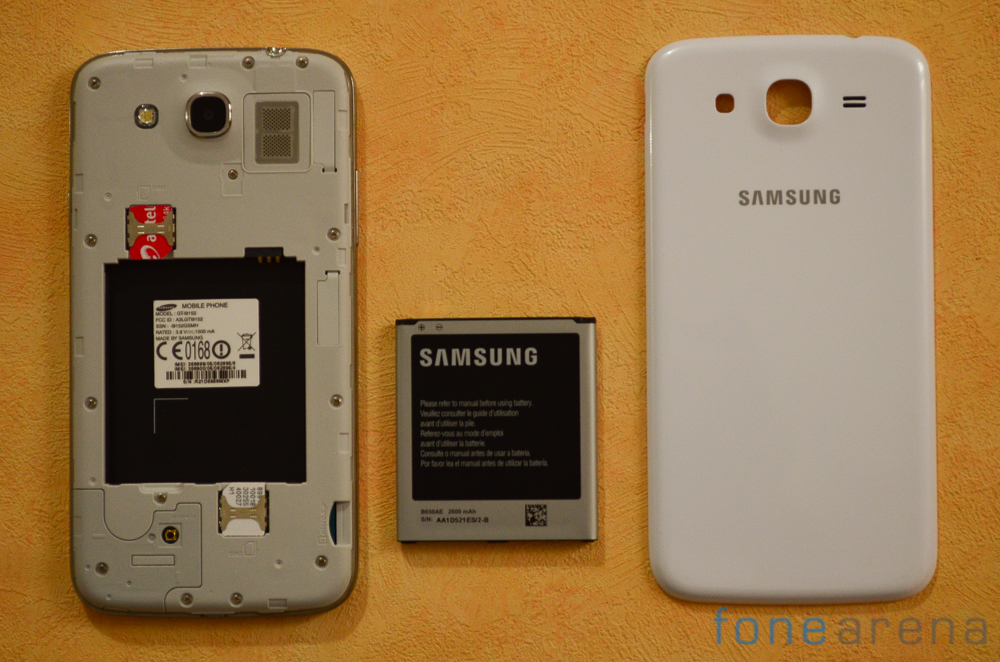 The dual SIM functionality on the handset is particularly well thought out. The phone comes with a SIM Manager application baked in that lets you set the default voice SIM, video call SIM as well as data SIM card. The phone remembers settings for multiple SIM cards so you should be able to switch them out easily. 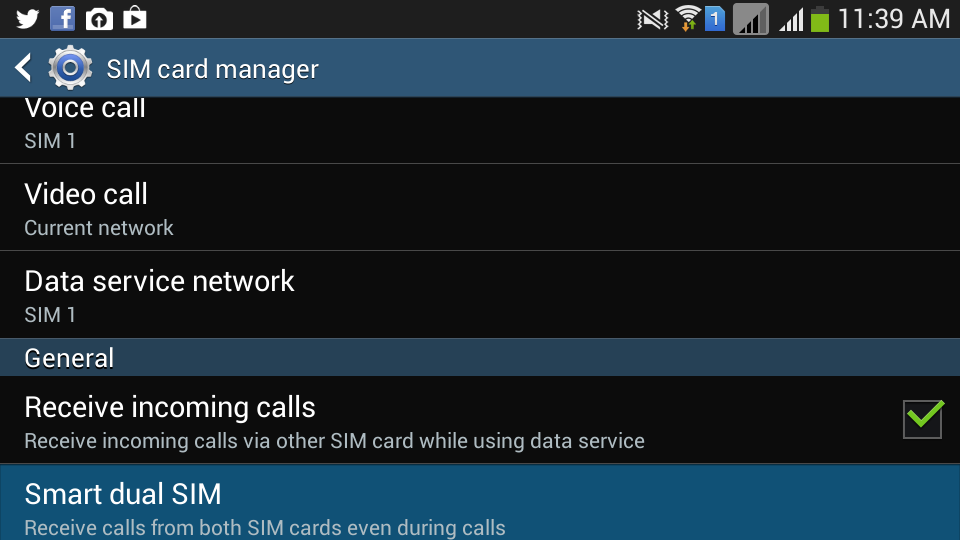 The SIM card slots are not hot swappable and require a reboot.   Both SIM cards are active simultaneously but Samsung uses a Smart dual SIM feature in which a call gets forwarded to your currently active SIM’s number from the other SIM card. This obviously means that you’ll get charged for a call. It is possible to toggle off this feature.

If you’re looking for a device that offers a massive display and  Dual SIM card slots alongside the latest release of Android, then the Mega 5.8 is perhaps your only option. 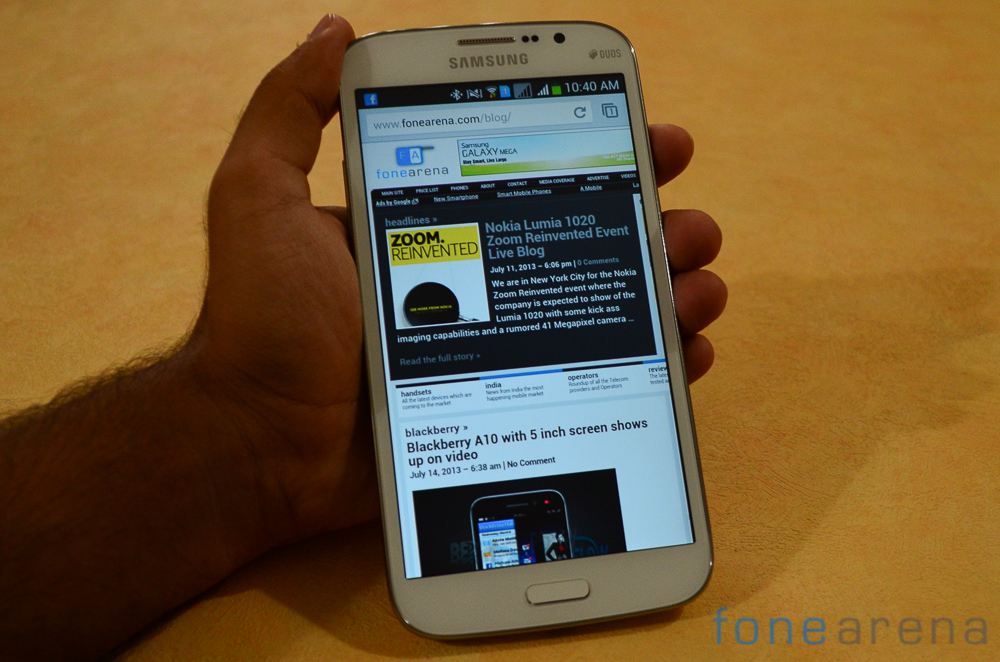 We found the handset to perform well enough but the Broadcom processor won’t be very future proof given its strictly mid range performance. The Dual SIM functionality of the handset impresses and the camera isn’t too bad either. If you can handle the size of the phone and the low resolution screen doesn’t bother you, it is a worthy smartphone to be considered. We would also recommend checking out the Note 2 which manages to offer most of the features with a slightly smaller display, much better specifications and most importantly a much more pocketable size. The Galaxy  Mega 5.8 is priced at Rs. 23,999.