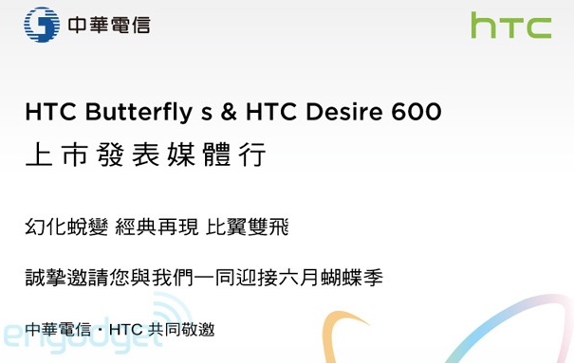 HTC has started sending out invites for the Butterfly S launch event in Taiwan in partnership with Taiwanese carrier Chunghwa Telecom on June 19th, according to a recent report from Engadget. The company would also unveil the Desire 600 with BoomSound that was announced for the international markets last month. The HTC Butterfly was originally announced in Japan as J Butterfly back in October last year. It was announced for the global markets in December.

There are lot of interesting mobile related events later this month. Samsung is expected to unveil the Galaxy Zoom the Premier 2013 event in London on June 20th and the Sony Togari (Xperia ZU) with a 6.4-inch 1080p display is expected at the company’s event on 25th in Germany.