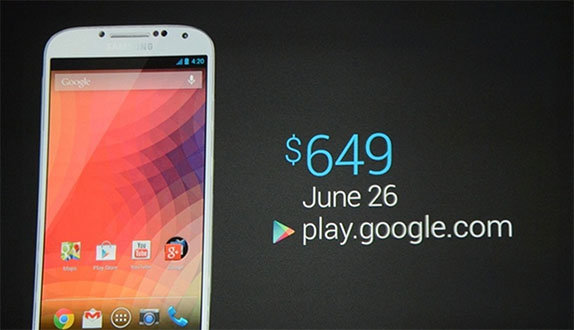 In a surprising move, Google has announced a Pure Google Android version of the Samsung Galaxy S4, available unlocked, with Nexus-like updates for 649$ in the United states. This comes as a surprise because this is not a completely new nexus device, like the rumoured Motorola X Phone, but just another Samsung Galaxy S4, with pure Google at heart. Unlocked from carriers and sporting an unlocked bootloader, this device would be the device to get if you are not willing to agree to Touchwiz or all of its features.

The Samsung Galaxy S4 with pure google is the 16 GB variation, and probably coming only in white. The device supports both AT&T and T-Mobile LTE networks and will be available starting June 26th. For 649$ this might be kinda pricey even for the people of the US. Most of the reactions on twitter and elsewhere are disappointed that the HTC One is not the phone that is getting this program. Google has promised Nexus-like instant updates for this version of the S4, with virtually all the specifications remaining the same.

So, are you looking forward to get one or are you planning to get the TouchWiz version instead? Sound off in the comments section below.