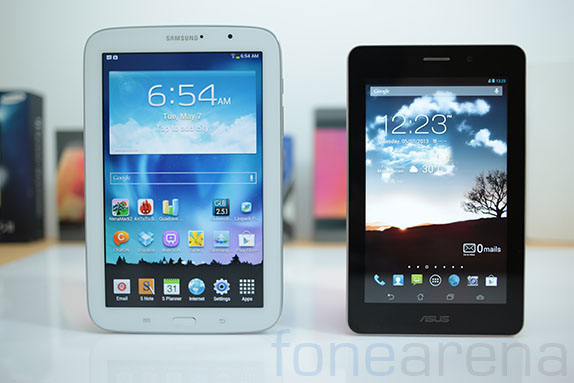 The ASUS Fonepad and the Samsung Galaxy Note 510(also called the Samsung Galaxy Note 8.0) are one of a kind tablets. Both launched at MWC, with similar functionality, but with different markets in mind. Carrying the Note brand, the Galaxy Note 8.0 or the Note 510 as it is called in India, has stylus features and all the Samsung goodness associated with all its Note products, while the Fonepad is ASUS’ first entry into the calling tablet market with it squarely aimed at the Tab 2 310’s price range while offering more performance per rupee ratio. By design and looks, it is clearly a Nexus 7 in another form. Between these two tablets, we are going to see which one is better and which one might suit you the best in case you are in confusion. Before diving into the in-depth text comparison, here is our video of the same – 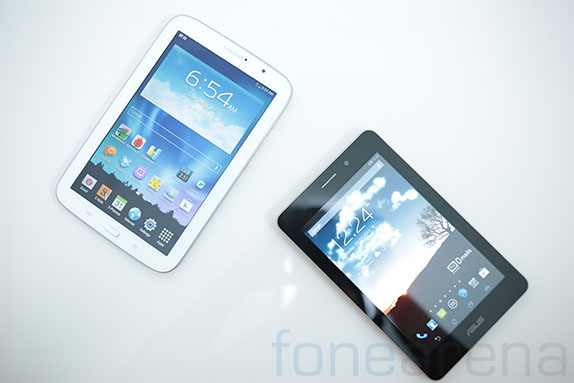 Lets talk about the design then. The ASUS Fonepad is through and through a Nexus 7 clone in terms of design. It look exactly like it and the dimensions are exactly the same too. The Galaxy Note 510 on the other hand is what you would expect from Samsung since the introduction of the Galaxy S3, it follows the same design language. The rounded corners and the chrome like plastic in the middle make it look like any other Galaxy you can find in the market. 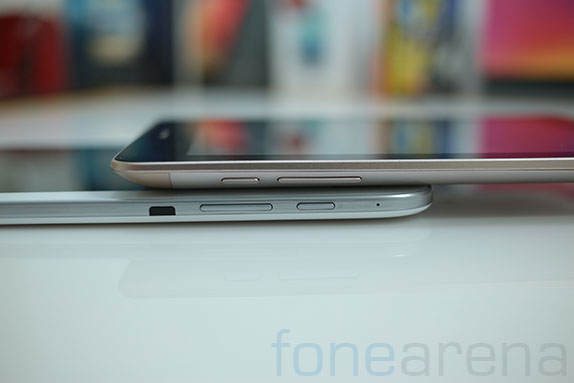 The ASUS Fonepad comes in at 10.4mm thickness and weighs about 340g while the Galaxy Note 8.0 is only 8mm thick, weighing in at 338g. The thickness is really apparent between the two but the bulkiness of the Fonepad is compensated by the curved sides. The Galaxy Note 8.0 completely plastic, while the ASUS Fonepad has a metal black, so it is deemed slightly better. Do note that the plastic on the back of the Galaxy Note 8.0 is a finger print magnet, so makes it slippery for use and makes it really uncomfortable to hold. Also, we felt it was really difficult to hold Note in one hand mainly due to the size issues. The Fonepad was much better to hold and offered slightly better grip. 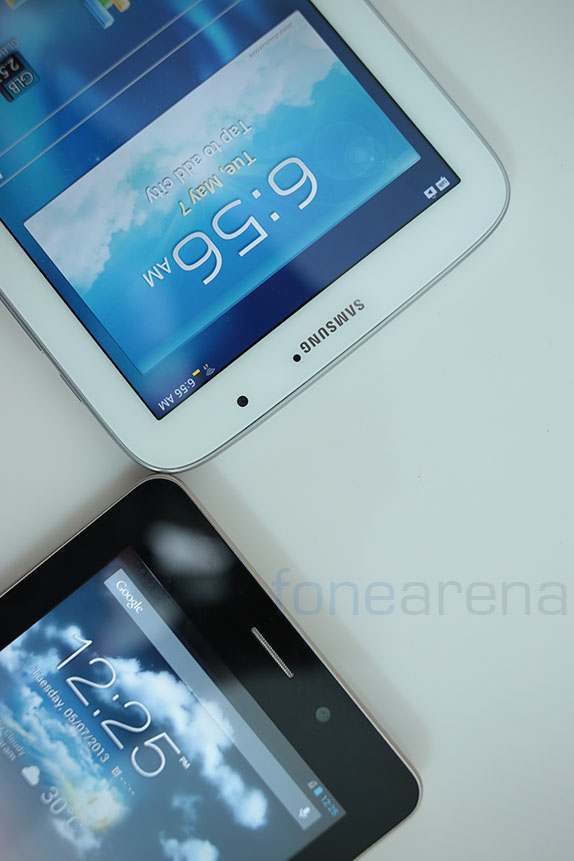 Covering the front of both the devices is the display. The ASUS Fonepad has a 7 inch 1280×800 IPS TFT screen much like the Nexus 7 again, but we saw more reflectivity from the screen, probably due to the increased air gap between the screen and the display. The Galaxy Note 510 has a 8 inch 1280×800 IPS TFT display, which is surprising because the the smartphone sized Note 2 has a 1280×720 screen, which is just shy 80 pixels off the Note 510’s much bigger display.

The Galaxy Note 8.0 has way better brightness and colour reproduction and both of these have colour variation tools to play around with in software. Text might seem a little less crisper on the Note because of the lesser 189 ppi while the Fonepad has 216 ppi at 7 inches. We noted that the Fonepad screen is a finger print magnet while the Note 510 has a decent oleo-phobic coating that prevents finger prints to an extent. Additionally, Note 8.0 has wacom digitiser for stylus input. 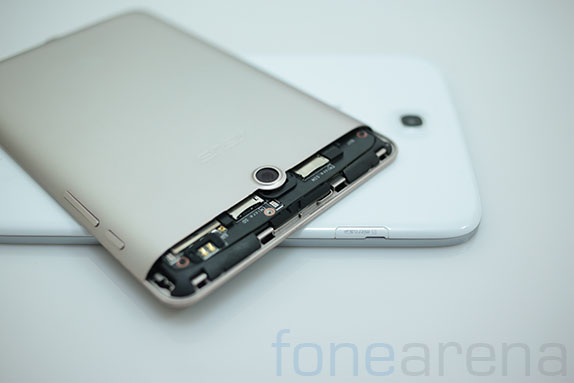 Coming to the hardware internals, the ASUS fonepad runs on the Intel Z2420 chip with the processor rated 1.2 GHz. it is a single core processor but with Hyper Threading, making it sport two logical cores. It has 1 GB RAM and the graphics are powered by the ancient power VR SGX 540. This might be sufficient for casual games but lacking for most new titles. The Galaxy Note 510 on the other hand has the Exynos 4412 quad core chip with each core rated at 1.6 GHz. Graphics are powered by ARM’s Mali 400MP with 2 GB of RAM being the memory provided. Both can make calls using SIM cards and have micro SD card slots and we have the 16 GB memory version on both. Simply put, in terms of raw performance or day to day performance, the Galaxy Note 510 blows the Fonepad out of the water. No doubt about it. But then, the price is also to be considered. More on this down the line. 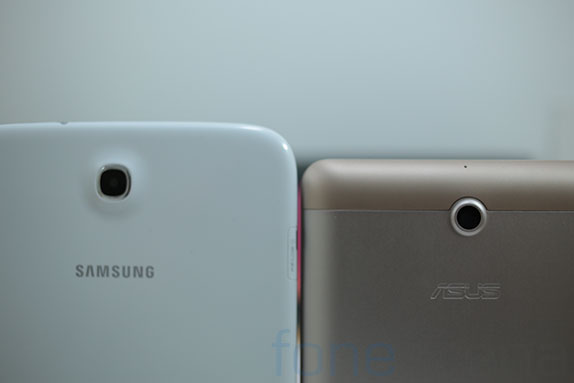 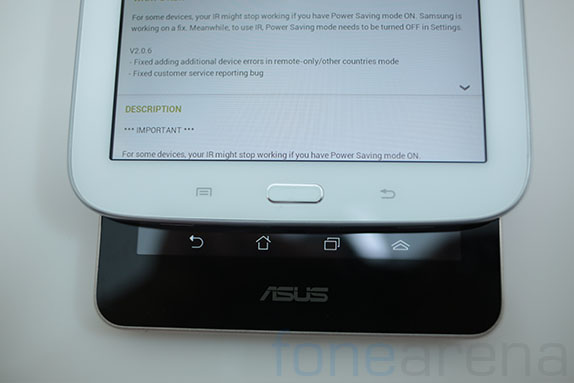 And finally, we come to software. The ASUS Fonepad and the Samsung Galaxy Note 510 both run on Android 4.1.2 Jellybean. The ASUS Fonepad’s UI is almost stock with few changes to widgets, notifications and basic apps while Samsung runs the much loved as well as hated Touchwiz. Touchwiz is feature rich with a lot of special apps from Samsung and like any small tablet, both are portrait UIs by default as that is the appropriate mode to use. The Fonepad has mini apps in its shortcut bar, just like its competitor the Galaxy Tab 2 310. While that may be missing on the Note 510, it makes up with a lot of stuff, like for example, pop up play, multi screen simultasking, smart stay features, motion features and a lot of stylus related functionality like you would expect on a Note branded device. In terms of software overall, it is easy to pick the Note over the Fonepad.

Priced at 15,999 the Fonepad can be simply described as a less powerful Nexus 7 with calling facility while the Note 8.0 is most definitely a bigger Galaxy Note with some compromises on display and cameras when compared with its smartphone siblings. Priced at around Rs. 30,500, the Galaxy Note 510 is perfect for people who crave for a even bigger Galaxy Note, and the Fonepad is the perfect entry level calling tablet which competes directly with the Galaxy Tab 2 310. A comparison with that is coming right away. Till then, let us know what you feel in the comments section below, and yes, if you have any questions let us know that too.