Twitter, the world’s only realtime social network has updated its mobile apps today. It includes a major update for Android and minor updates for Twitter for iPhone and the mobile web app. The main improvement of the Android app is that it has finally went HOLO, the design language that Google has been preaching to third party devs since 4.0 ICS, with blessings from lead designer Matias Duarte. Minor improvements to all the apps is that they get improved cards support with deep linked app links inside the details page.

Twitter has been recently undergoing a through design change, with the first update being the Windows Phone app receiving all the uniform goodness of the UI from all the other apps, and now the Android version has gone Holo to maintain the integrity even further and slightly upping the integrity with the host OS itself. Twitter has also announced that they are introducing deep linked shortcuts for apps inside the cards, so if one clicks on a link in foursquare they will be taken to the app if installed, or to the store otherwise. That’s a pretty neat implementation which is much needed when apps are totally disconnected from each other on phones. 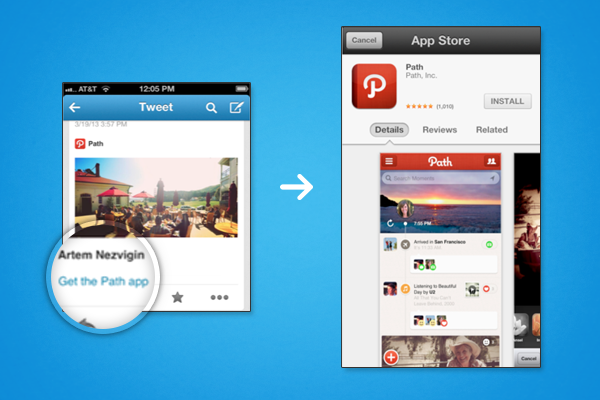 Here is the changelog for the Android version –

New in this release of Twitter for Android:
– We’ve got a brand new look and feel crafted for Android 4.0+. Navigate seamlessly between your favorite parts of Twitter with a simple swipe.
– It’s easier to connect with friends and join conversations with @username and #hashtag suggestions that appear as you search or compose a Tweet
– Discover, install and launch your favorite apps from Tweets
– Other bug fixes and improvements

Twitter for iPhone now helps you discover, install and launch your favorite apps from Tweets. This update also includes the following improvements:
• Faster launch times and general performance upgrades
• “Retweeted by” in Tweet detail is now tappable
• Fix for reply-to-self in conversations
• Fix for bug that prevented undoing retweets in some cases