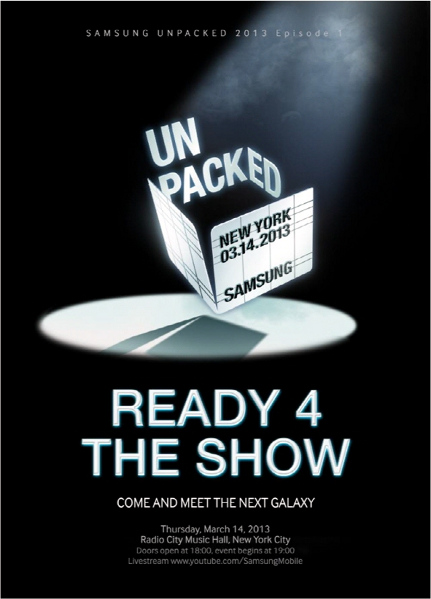 There were several rumors about the Samsung Galaxy S4 launch date. First it was March 15th, later it was rumored that the phone would be unveiled on March 14th. According to a recent report from Reuters based on a report from Korean Edaily new site, the event is indeed happening on March 14th in New York as confirmed by the JK Shin, chief of mobile division, Samsung.

Samsung S4 image surfaced recently, and according to the recent rumor it would feature a 4.99-inch Full-HD SoLux Display and feature a 1.9 GHz quad-core Qualcomm Snapdragon 600 processor. Other rumored specifications include, Android Jelly Bean OS, 7.7 mm thick, weigh 138 grams. It would come with 2GB of RAM, up to 64GB internal memory, 13MP Camera, 2MP front-facing camera and wireless charging.

Let’s wait for the official announcement on March 14th to get more details about the Galaxy S4.

[Update: Samsung has just started sending invites for the Unpacked event for March 14, 2013 in New York. It reads ‘Ready for the Show’ with the tag line come and meet the next Galaxy]