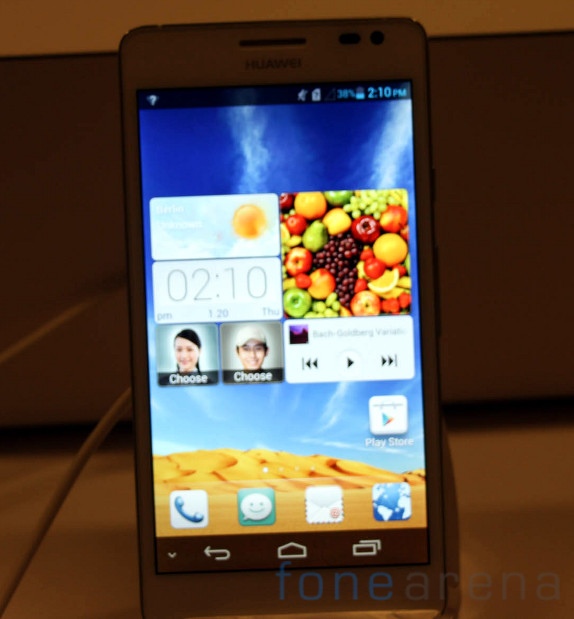 Huawei unveiled the Ascend D2 at the International CES 2013 earlier this month. We got you the hands-on images of the Ascend D2 already, here we have a video of the device. It has a 5-inch (1920 x 1080 pixels) Full HD IPS+ display with 443 PPI and Corning Gorilla Glass protection. It is IPX 5/4 compliant for dust and water resistance. Huwaei’s own 1.5 GHz quad-core Hi-Silicon K3V2 processor powers the smartphone, and it runs on Android 4.1.2 (Jelly Bean) with Huawei’s EmotionUI 1.5 on top, similar to the Ascend Mate.

There is a 13MP camera with BSI sensor and LED Flash at the back, and a 1.3-megapixel HD front-facing camera. It is capable of recording 1080 Full HD videos and full HD video playback. It has 2GB RAM and has 32GB of internal memory. The connectivity options include, 3G, Wi-Fi 820.11 a/b/g/n dual-band, DLNA, Wi-Fi Direct, Bluetooth 4.0 with EDR and GPS.

The phone has a metal frame on the sides. It is 9.4 mm  thick and packs a powerful 3000 mAh battery which promises 6 days standby.