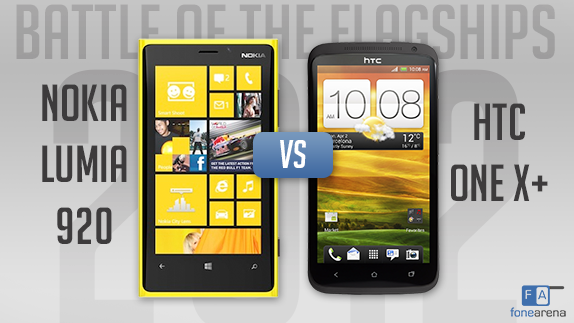 Hello readers! We welcome you to the first round of the “Battle of the flagships 2012” at Fonearena. The devices at battle today don’t need any introduction, they are the highly acclaimed flagships of two companies very recently getting known for their fresh designs and striking devices. Yes, Nokia and HTC, outside the Apple world, have been leading the industry with the best designed smartphones in the market for a while now, with their Lumias and the One series of devices respectively. But what will happen when they are made to fight head to head? Lets start the battle and find out!

The Nokia Lumia 920 was heralded as the most innovative smartphone by Nokia, when it launched on September 5th at New York City. It also has a huge list of features to support that claim. Lets take a look at them now –

All the above features make the Nokia Lumia 920 the most innovative smartphone according to Nokia. But the features don’t stop there, the Lumia 920 has a whole lot more to offer, with it’s spanking new OS in Windows Phone 8 which is a subset of the larger Windows operating system, and with it brings new chassis updates too, enabling a lot of competitive hardware for the device. For example, the device sports a 1280×768 display, which was not possible with the earlier chassis restrictions imposed by Windows Phone 7. Likewise, the device now supports NFC, bluetooth transfer and more hardware enabled features, making it almost on par with competing platforms. Nokia has also added a lot of value with its own mapping solution, various apps related to mapping etc. to amplify the experience. However the major thing Windows Phone 8 lacks is apps.

Coming to the camera, it is the undoubtedly the most important feature of the Nokia Lumia 920, as it carries the PureView brand that was made famous by the Nokia 808 PureView. While it does not have the oversampling magic that the 808 conjured, the 920 has its own strengths which include optical image stabilisation which enables shake free well lit low light pictures and stabilised video recording. Enough of the Lumia 920, lets get to the One X+ then.

The HTC One X+ one the other hand is currently the HTC flagship, and an upgrade to the ever popular HTC One X that launched at MWC the same year. But why the upgrade so soon, you ask? Well, the One X, while being awesome as it is, came with a few complaints regarding storage, battery performance etc. And in a way to fix, or enhance it, HTC came up with the One X+ very recently. It has improvements in terms of performance too, while looking just like the One X. Here are some highlights of the device –

The One X+, although a revamped One X, is still a great device that has carried forward the brand and everything that the One X stood for. While the camera is a touted feature, apart from the impressively low shutter lag, it is not on par with other devices like the Galaxy S3 and the iPhone 5 let alone the Lumia 920. But the camera holds its own when it comes to shutter performance, by having one of the fastest speeds from focus to shot. The trickery is possible thanks to the Image sense chip that resides beside the BSI sensor.

The One X+ also comes with updated internals, with the new Tegra 3 1.7 GHz processor, that improves performance over the One X. Not only that, the One X+ is the first HTC device to launch with Android Jellybean which brings various improvements like project butter, new notifications panel, Google now.. etc. Android has been the king of the smartphone OSes for a while now, and it doesn’t disappoint on the One X+. Sense 4+, HTC’s updated skin improves over the earlier version, but the jury’s still out on whether it is good or not. 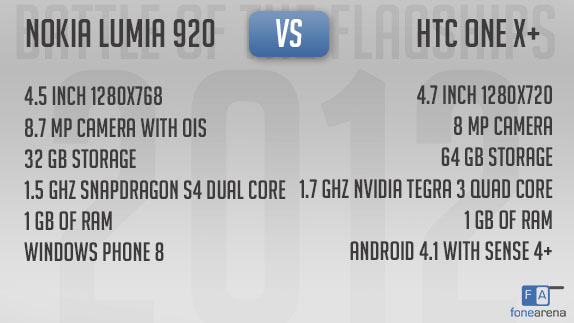 I think enough has been said about both of these device, it will get opinionated if we go in depth. So, we leave the judgement to you, the readers. Do remember that this is part of a larger battle that will earn one device the title of the “Ultimate Smartphone flagship 2012”. You can check the device standings here.

So, what are you waiting for?

The voting is over! Here are the results – 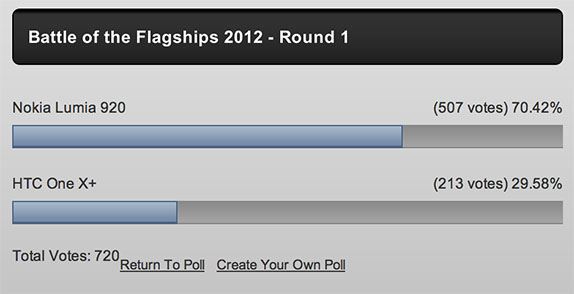 The Nokia Lumia 920 has been chosen as the winner of the first battle in Round 1, with an overwhelming 70% majority! Check out the other battles here! 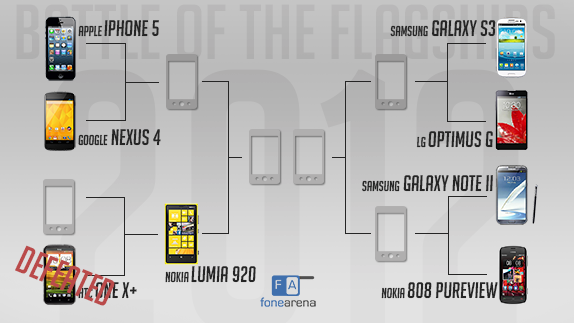