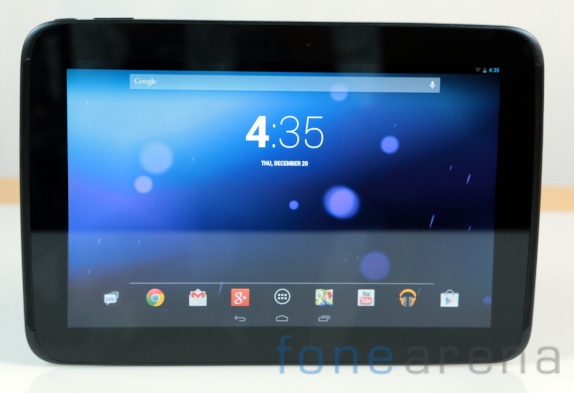 Google announced the Nexus 10, their first 10-inch Android tablet at the end of October, and we unboxed it earlier. ASUS manufactured the Nexus 7, but Google has partnered with Samsung for the Nexus 10, known for its popular range of Galaxy Tabs. The Nexus 10 is powered by a 1.7 GHz dual-core ARM Cortex-A15 Exynos 5 dual processor, the first Cortex A15 processor. Let use get into the detailed review. The display is amazing in terms of pixel density but clearly falls short of the iPad 4’s retina display in colour accuracy and viewing angles. The Nexus 10’s display, made by Samsung, is a “True RGB Real Stripe PLS” screen. The colours slightly wash out at extreme viewing angles. Standalone, it’s a pretty damn good display but in comparison to the iPad, it loses out. Nevertheless, the pixel count makes up for it by letting you browse websites in full glory. Possibly the best browsing experience you can have on a tablet. There are loud speakers on both the sides. The loudspeakers are decently loud but lack the fidelity and are incapable of reproducing low frequency sounds. There is a 1.9 Megapixel front-facing camera at the top along with a ambient light sensor that adjusts the screen brightness automatically. There is a notification LED on the bezel, below the display that is hardly visible. We didn’t even know it existed until after a couple of days of usage.

At the bottom, is a port for magnetic Pogo pin charger port, similar to the Mac books. There is also a tiny microphone inside it. The pogo pin port would let the tablet charge faster than charging using the micro USB port. Google has not released a dock or a charger to support it yet, but it is expected this year.

At the top there is a power / lock button and a volume rocker.

On the left you have a 3.5mm audio jack and a micro USB slot. On the other side there is a micro HDMI port. The tablet is 8.9 mm thick, bit slimmer than the iPad. If you are used to smaller 7-inch tablets, the Nexus 10 feels quite heavy at 603 grams. You simply cannot hold it in one hand for more than a minute, in landscape orientation. At the back there is a 5MP auto focus camera with LED flash and a secondary microphone below the camera. The back has smooth plastic cover with rubbery feel at the top and a soft plastic below that with Nexus and Samsung branding that also offers nice grip. Even though the tablet is made of plastic, does not feel cheap as the Samsung Galaxy Note 10.1 (Note 800) that we reviewed earlier. The 5MP camera is good, but not the best. It is better than the camera on the Note 10.1 (Note 800). You can use the flash while you capture images low-light and dark. You can just click on the screen to lock the focus. You can also switch to front-facing camera and adjust settings to control white balance, change picture size, select scene mode (Auto, Action, Night, Sunset, Party), enable geo tagging and adjust exposure. You can capture panoramas and Photo Sphere images at 360 degrees.

Here are some camera samples (click to view the full samples).

You can also record videos with the camera at 720p resolution. You can use the flash light while recording videos and can adjust white balance from the settings. You can just touch the screen to capture images while shooting a video. There is a time lapse feature that lets you capture time lapse videos by setting a particular timing.

Here is the 720p video sample The Nexus 10 launched with Android 4.2 (Jelly Bean) out of the box and has Lockscreen widgets, Multi-user support, separate windows for notifications and Quick Settings in the home screen. Unlike the Nexus 7, which had favorites tray on the side in the landscape mode, the Nexus 10 has it at the bottom in both the landscape and portrait modes. You can add folders to the tray, and there are on-screen touch buttons for home, back and multi-tasking. The functions of these buttons varies and also disappears according to the environment. The lock screen has widget support and multi-user switch that lets you log into your personal account and maintain your own settings. You can also read What’s new in Android 4.2 (Jelly Bean) to know more details about these features. There is a Movie Studio app that lets you edit videos by adding music and images. You can add effects such as transitions, effects (pan zoom, gradient, sepia, negative, no effect). You can also chance the rendering mode, change aspect ratio and export the finished version at 1080p resolution. The Play Music app lets you listen to music and purchase music (in select countries). You can view the recent music, Albums, Artists, Songs, Playlists and Genres. There is a equalizer with range of settings. You can also enable bass boost and 3D effect options when you plugin earphones. The audio from the loudspeakers are loud and clear.

The tablet can also play videos but the default player is capable of playing only 3GP and MP4 video formats. Gesture typing is one of the main features of the keyboard in the Android 4.2 update. The keyboard also offers next-word suggestions Some of the new advanced features include, language switch key and custom input styles. Still there is no split keyboard to type easily with both the hands. The Chrome browser is fast and scores 385 points in the HTML5 test with 11 bonus points. The connectivity features include, Wi-Fi 802.11 b/g/n (MIMO+HT40) which offers better connectivity, Bluetooth, Dual-side NFC (Android Beam) to share content between other NFC-enabled devices easily. There is a micro HDMI slot to connect the device to external displays, but there is no Miracast wireless streaming support that was present in the Nexus 4. You can also connect an external keyboard, mouse, joysticks, gamepads to the micro USB port using an adapter.

Here are some benchmarks that tests the performance of the 1.7 GHz Dual-core ARM Cortex-A15 Exynos 5 dual processor and the Mali-T604 GPU. In the Smartbench productivity, the Nexus 10 is behind the Nexus 7. In the Nenamark 2 test, the next 10 is right behind the Nexus 7. The Nexus 10 has a great display, offers good performance and runs on the latest version of Android v4.2. The 9,000 mAh Lithium polymer battery offers about 2 days of battery life in a single charge. The tablet comes in 16 and 32GB versions, so you don’t need to worry about the lack of the micro SD slot. There is no 3G version of the tablet and there are very few apps on Google Play that are optimized for the 10-inch screen. If you are looking for a large Android tablet with a good display, nice build and the latest Android OS, this is definitely the tablet you need.