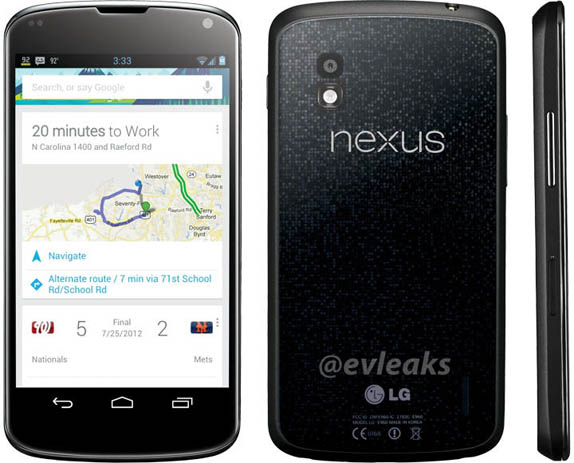 LG Mobile’s upcoming Nexus  smartphone has been doing rounds on the internet a lot. And today we have a sweet looking picture of the phone with the iconic Nexus branding on the back thanks to @evleaks. The pictures of this phone had been leaked in the past as the LG E960 but the Nexus branding was missing in those images. Specs of the LG Nexus phone  have also surfaced hinting at Snapdragon S4 quad-core CPU, Android 4.2 and wireless charging.

Google is holding an Android event on October 29 and it is highly likely that we might see the LG Nexus phone being officially announced. We might also see more Nexus products including a 32GB Nexus 7 and a 3G Nexus 7 tablet along with a 10inch Nexus device. The last week of October is turning out to be an interesting time. The iPad mini goes on pre-order on October 26th, Google is hosting an Android event on the 29th, Microsoft is also hosting it’s Windows Phone 8 event on the 29th