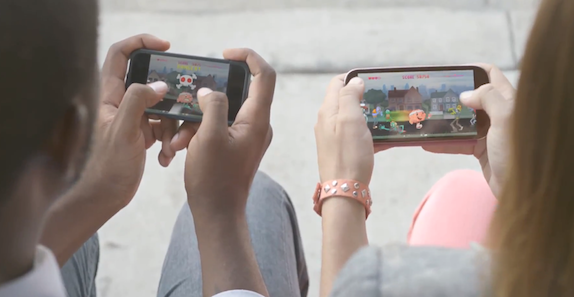 Samsung’s Galaxy S III is arguably the best Android phone on the market right now. Some of you might disagree and say the Note II deserves to wear that crown, but whatever, either way Samsung is dominating. The South Korean handset vendor has just uploaded three new 30 second ads to YouTube that demo some of the GS3’s features. In the first video, dubbed “Game On”, an iPhone user and a GS3 user are sitting together on a bench playing a game. The iPhone owner is struggling because his screen makes it difficult to control the videogame. The GS3 owner on the other hand … you get the idea.

The second video, called “Date Night”, features a potential couple sitting on the couch. The male wants to put on some romantic music, so he takes out his GS3 and picks the Spice Girls of all bands. The woman suggests she has a better idea, so she sends the guy a music file using tap to send. The guy then plays that song on his stereo system, wirelessly, using the GS3.

And finally we have the most controversial video, at least controversial in America. A man is about to step into a taxi cab because he needs to go on a trip. Standing next to him are his wife and two daughters. The daughters tell the father that they’ve made a video for him and that he should watch it while he’s on the plane. The wife uses her GS3 to tap and send that video. The father then gets it the taxi. All of a sudden the wife says she also has a video to share, but advises her husband not to watch it on the airplane.

Was it a sexy video? Probably. Are some people going to find it offensive? Sadly, yes.