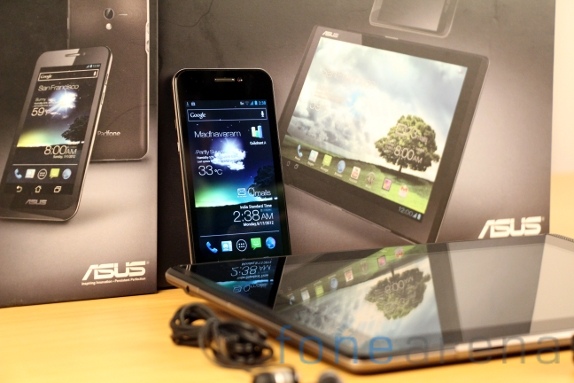 Asus has finally launched the PadFone in India, as we said last week. Asus unveiled the PadFone last year, but they detailed the specs only at the MWC 2012, earlier this year. The PadFone comes with 4.3-inch (960×540 pixels) Super AMOLED display and is powered by a 1.5 GHz Dual-Core Qualcomm Snapdragon S4 processor. It runs on Android 4.0 (Ice Cream Sandwich). The PadFone could be docked into the PadFone station that transforms it into a tablet that has 1.3MP front-facing camera and a micro HDMI port. The PadFone weighs 129 g and the Padfone Station weighs 724 g.

It has a 8MP Auto Focus camera with LED Flash at the back  and secondary VGA camera.The PadFone Station has a 10.1-inch display. It has 1GB LPDDR2 RAM and 32GB of internal memory with a micro-SD card slot for expansion.

The connectivity features include 3G (HSPA+ UL:5.76 Mbps/DL:21 Mbps), WiFi 802.11 b/g/n, Bluetooth 4.0 and aGPS. It comes with a keyboard dock that has Multi-touch pad, SD Card reader and a USB port and the headset stylus that can be used as headset and also doubles up as stylus. The Stylus headset has up to 7 hours of talk time and up to 10 days of standby time.

The Asus PadFone 32GB variant is priced at Rs. 64999. Do check out our Preview video of the PadFone.